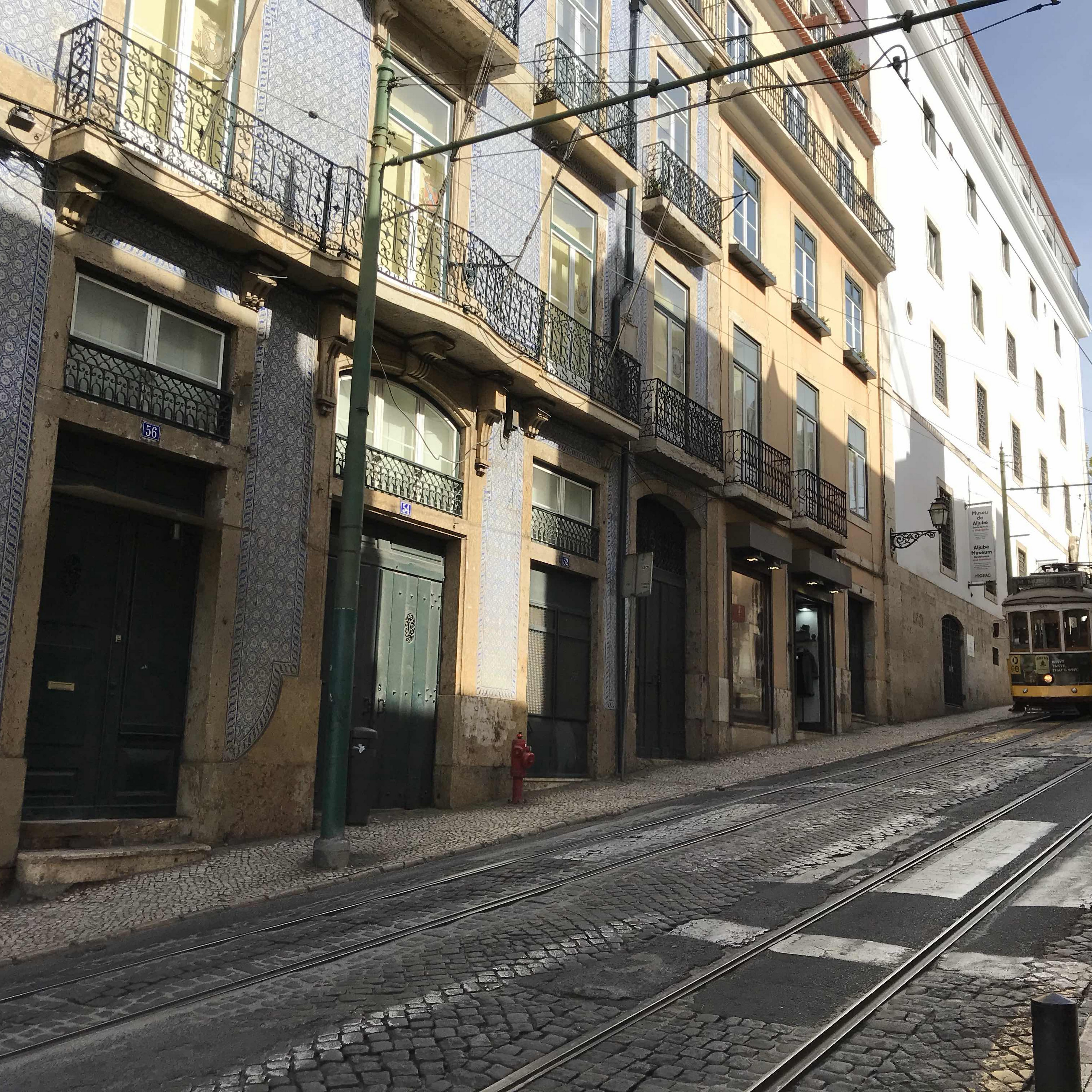 This is going to be a closer, shorter adventure than others in this blog: I’m in Lisbon for a long weekend! I’d been meaning to come for ages so I’m super excited!

I flew in last night from Paris, so I had all day today to discover the city. (Quick tips: I took the metro from the airport, which dropped me off at the city center in around 40 minutes. You can buy the local version of an Oyster card directly from ticket machines and load money on it, and then you can tap in and out of the metro, buses and trams in Lisbon.) 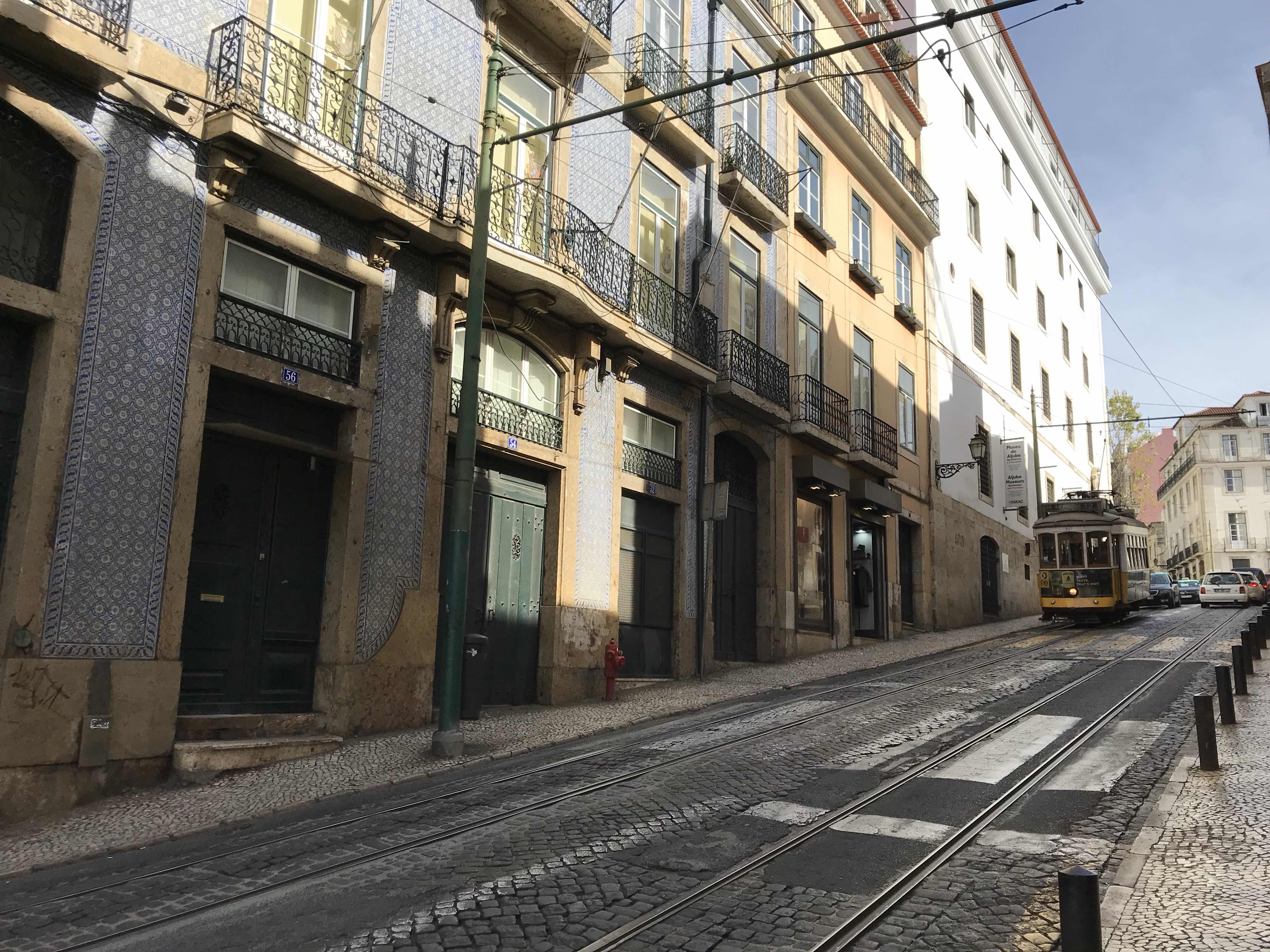 It was sunny and warm today, but not hot, so I decided to start my visit with a nice long walk to get acquainted with the layout of the city. I walked down Avenida da Liberdade, through Restauradores and Rossio (two squares, the former big but rather empty, the second with a large fountain in the middle and a classical building at the head), and then I found myself right in the Baixa, the lower neighborhood of hilly Lisbon. The strets here are narrow, the buildings old but colorful, and there are lots of restaurants, cafés and shops everywhere. At around ten thirty in the morning there weren’t a lot of people around, but as the morning progressed the streets grew more crowded. 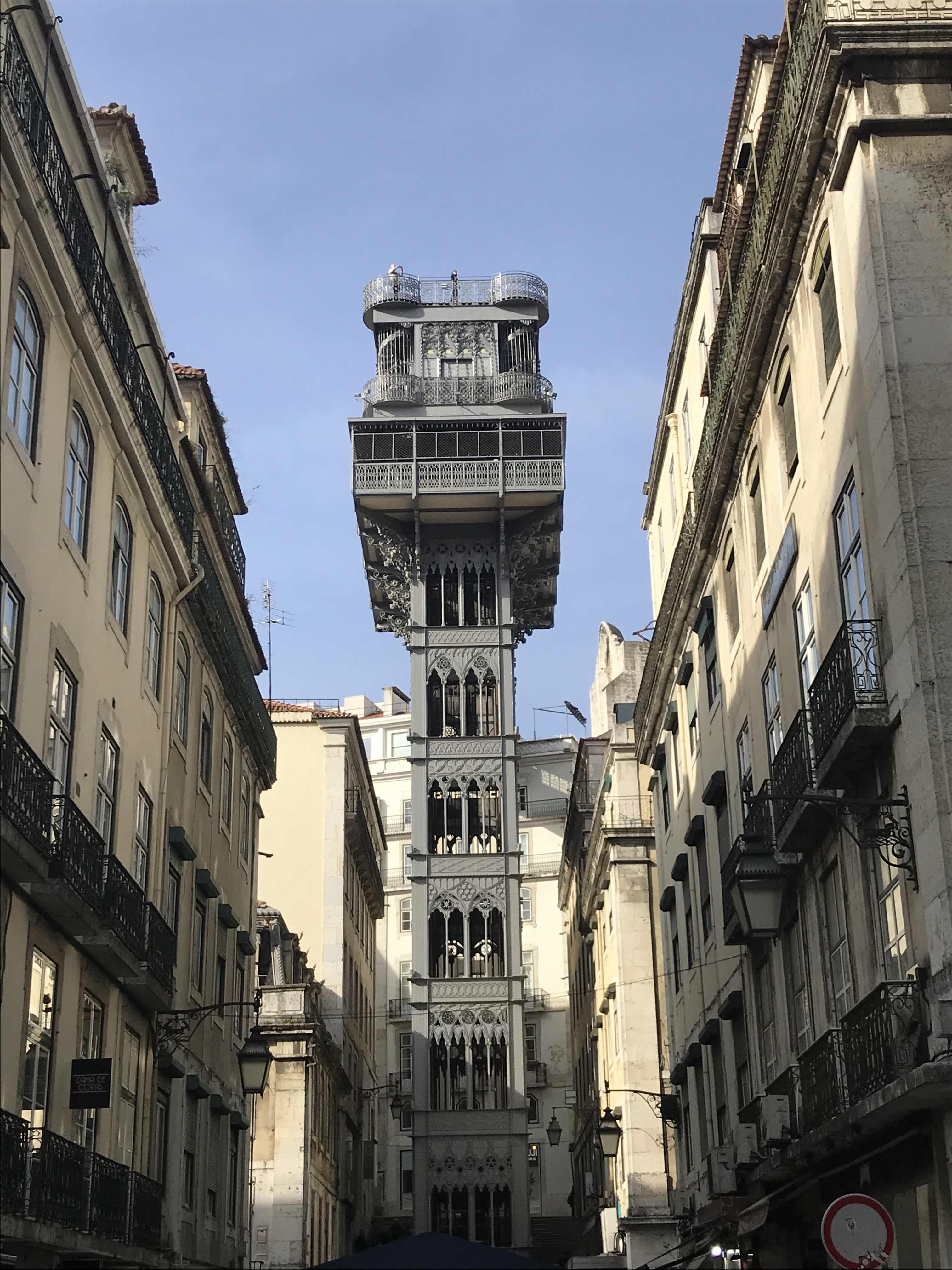 The main shopping and dining street seems to be rua Augusta, so I followed it past a giant arch, across the Praça do Comércio, all the way down to the Tagus river, which seemed to get cruise ships as well as freight transports.
I thought this was enough dilly-dallying on the lower levels and moved on to Serious Touristing: my first target was the Castelo de são Jorge, a big medieval castle perched at the very top of a steep hill. The Google Maps directions to get there from the lower city made absolutely no sense, so I had to wing it a little. I took one of the elevators that facilitate getting onto one of the hills, but I still had a ways to climb up slopes and stairs until I reached the arch that leads to the castle’s ticket office (€10 a ticket) and the entrance right next to it. 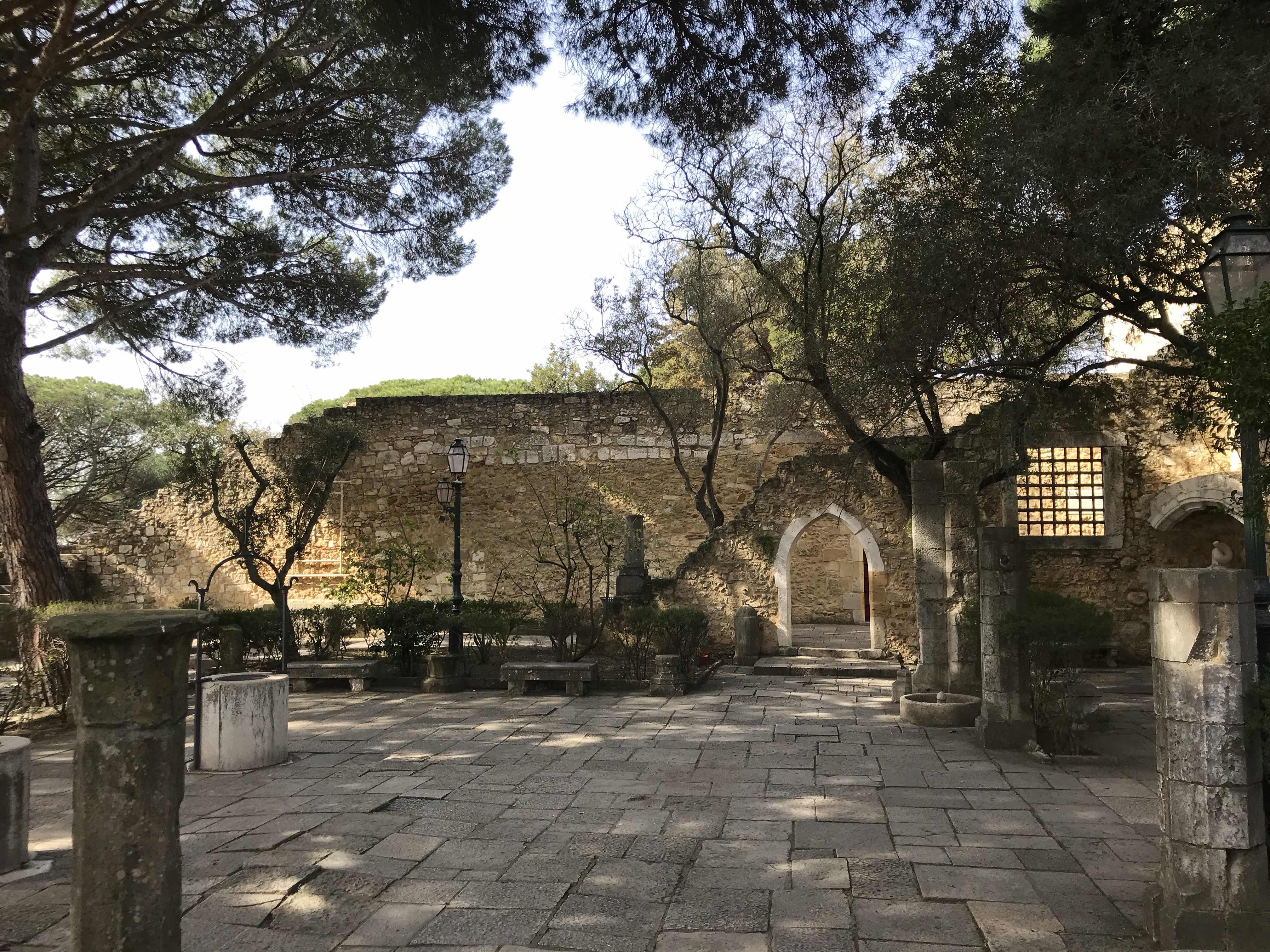 The castle was quite crowded, I guess, but it’s so big and wide open that I didn’t mind; there are pretty much no interior sections, so outside of a few narrow ramparts a large part of the visit revolves around exploring wide balconies, terraces and courtyards. The castle is extremely old: its first structure was built in the 12th century, during the caliphate, although Portuguese kings expanded the fortress considerably. This means that, although historically significant, the castle’s structures themselves aren’t very striking, all straight lines and square angles. The real draw is the amazing, 360° views you get from pretty much anywhere within the castle grounds. You can see the river, you can see the lower city, you can see the neighboring hills… It was a beautiful experience, especially because the day was so clear. I was able to trace the morning’s entire walk, from my hotel all the way to the river. 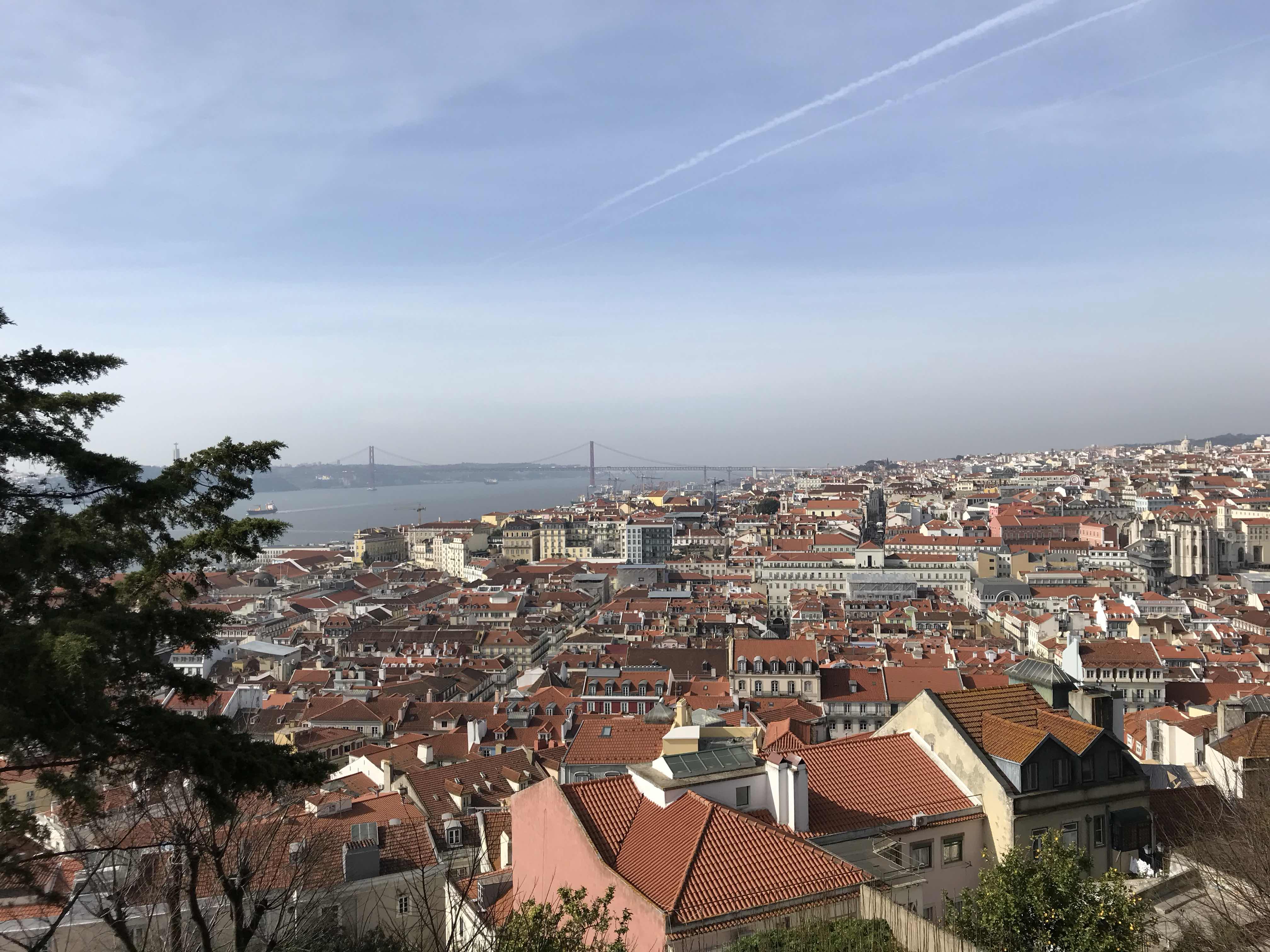 After another long walk all around the castle’s different sections and ramparts, I eventually made my way back down the hill. I stopped at the Miradouro de santa Luzia, a beautiful terrace also with great views. All of Lisbon feels very Mediterranean, even though technically it’s facing the Atlantic, I guess: the olive trees, the architecture, the streets full of life… A lot of it also feels old, worn down perhaps but not rundown, if that makes sense.
By now I was positively starving, so I checked TripAdvisor and settled on Floresta das Escadinhas, a small and unassuming restaurant that I for sure wouldn’t have found on my own, it being on a tiny stairway between two streets. I had a delicious braised sea bream that cost only €9 -it would easily have cost me twice that back in France, and it wouldn’t have been nearly as good. It was super simple, with no sauces or garnishes whatsoever, just the way I like it (you may find it dull if you prefer more elaborate cuisine; to me it was perfect). 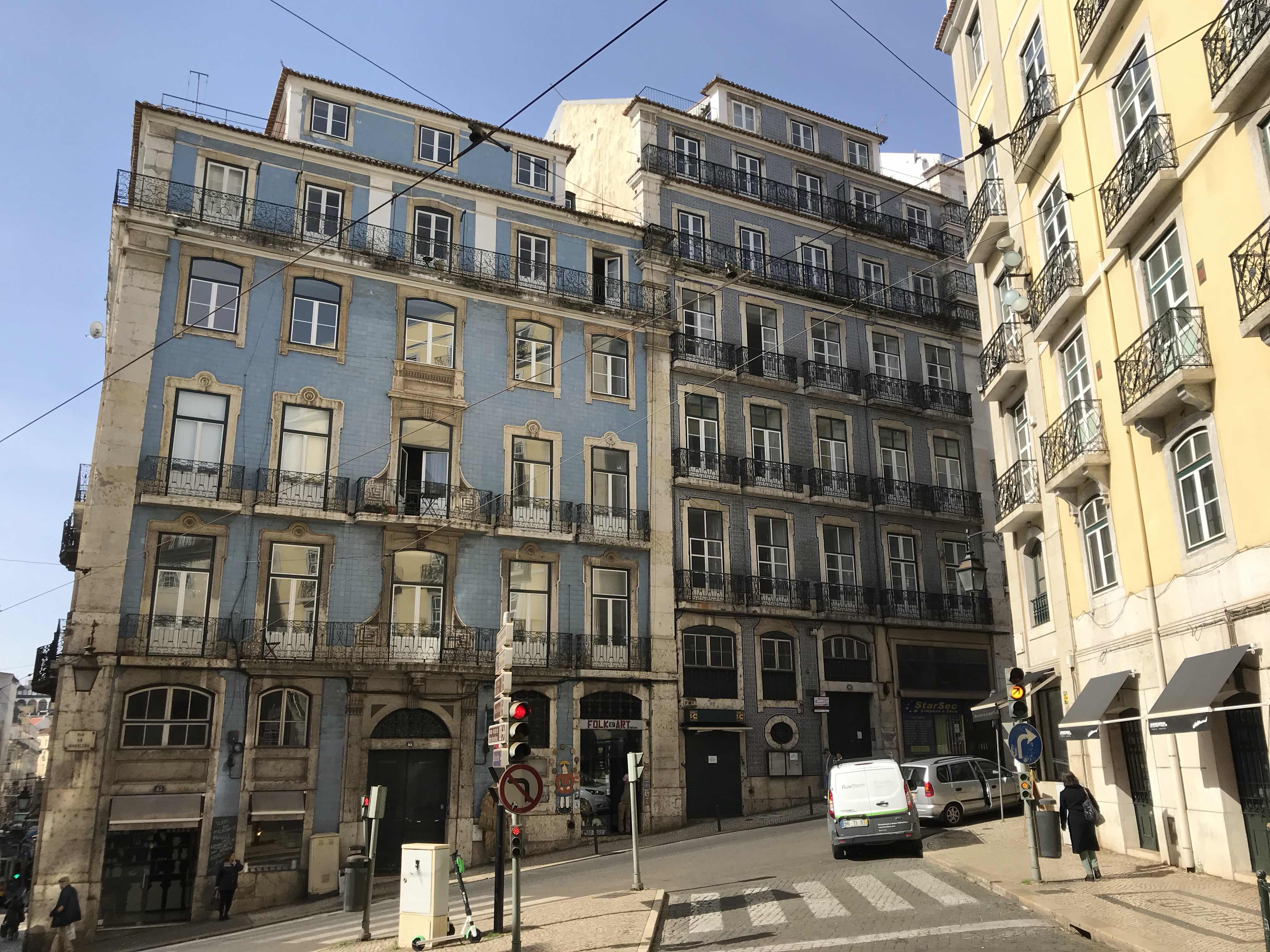 After lunch I had the idea of visiting the tile museum, so I got to a bus stop and waited a quarter of an hour for a bus that would take me there. When the bus did come, it drove right past me and the other people at the stop; I wasn’t about to stand around for another twenty minutes, so I parked the museum plan for tomorrow or the day after and instead went back to the hotel to rest my feet a little after walking up and down Lisbon all day. Of course, along the way I stopped to buy pastéis de nata, Lisbon’s delicacy! They’re small custard tarts, and I was hesitant because I don’t actually like custard, but I can attest that they are delicious! The puff pastry is amazingly crispy, they’re not too large, and also not overly sweet (when I bought mine at Fábrica de Nata, they gave me baking sugar and cinnamon to sprinkle, but my tart was already yummy plain).
After a good rest, I decided to go listen to some fado in the evening. Turns out they do fado sessions at the theater right next door to my hotel, but it looked like a tourist trap so I looked elsewhere and eventually found Real Fado, which organizes weekly fado recitals in an old water cistern! If you know me, you’ve already heard me rave about the Basilica Cistern in Istanbul (you can read about it on this very blog), so if there’s one in Lisbon and I can enjoy fado in it to boot, then I can’t let the opportunity pass!
The cistern is under a small park, and although it was only a 300 m walk or so, as usual in Lisbon distances become more treacherous when you factor in all the stairs and steep slopes. When I made it up there and found people queuing in front of the stairs to the cistern, I had a brief moment of panic when I noticed that everyone had tickets already and wondered if maybe it was by reservation only -but not to worry, you can indeed buy them at the door (€20). 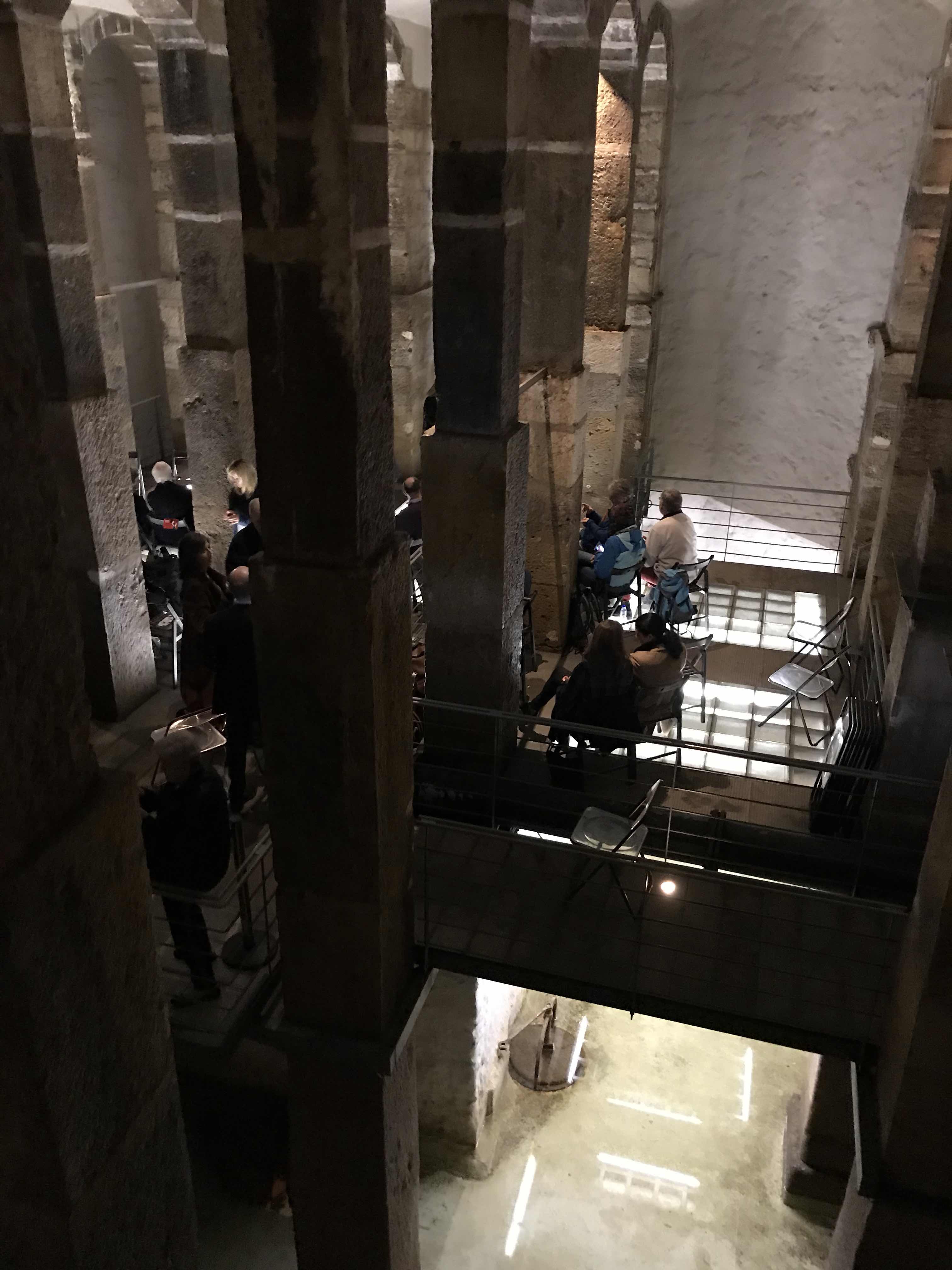 The space is understandably not as ancient or as enchanting as the Istanbul cistern, but it’s still an interesting place, with platforms suspended over the water reservoir and tall, vaulted ceilings. There were many foreigners in the crowd, but also Portuguese people. The musicians were a group of five men, two of them guitarists, one lead singer, and two backup singers; they played beautiful fado songs, but also cheerier songs from the south of Portugal (maybe they didn’t want to leave us with too much saudade!). The cavernous venue strengthened their voices with a slight echo, making the harmonies especially booming. I had a very enjoyable time -what better way to finish my first day in Lisbon?