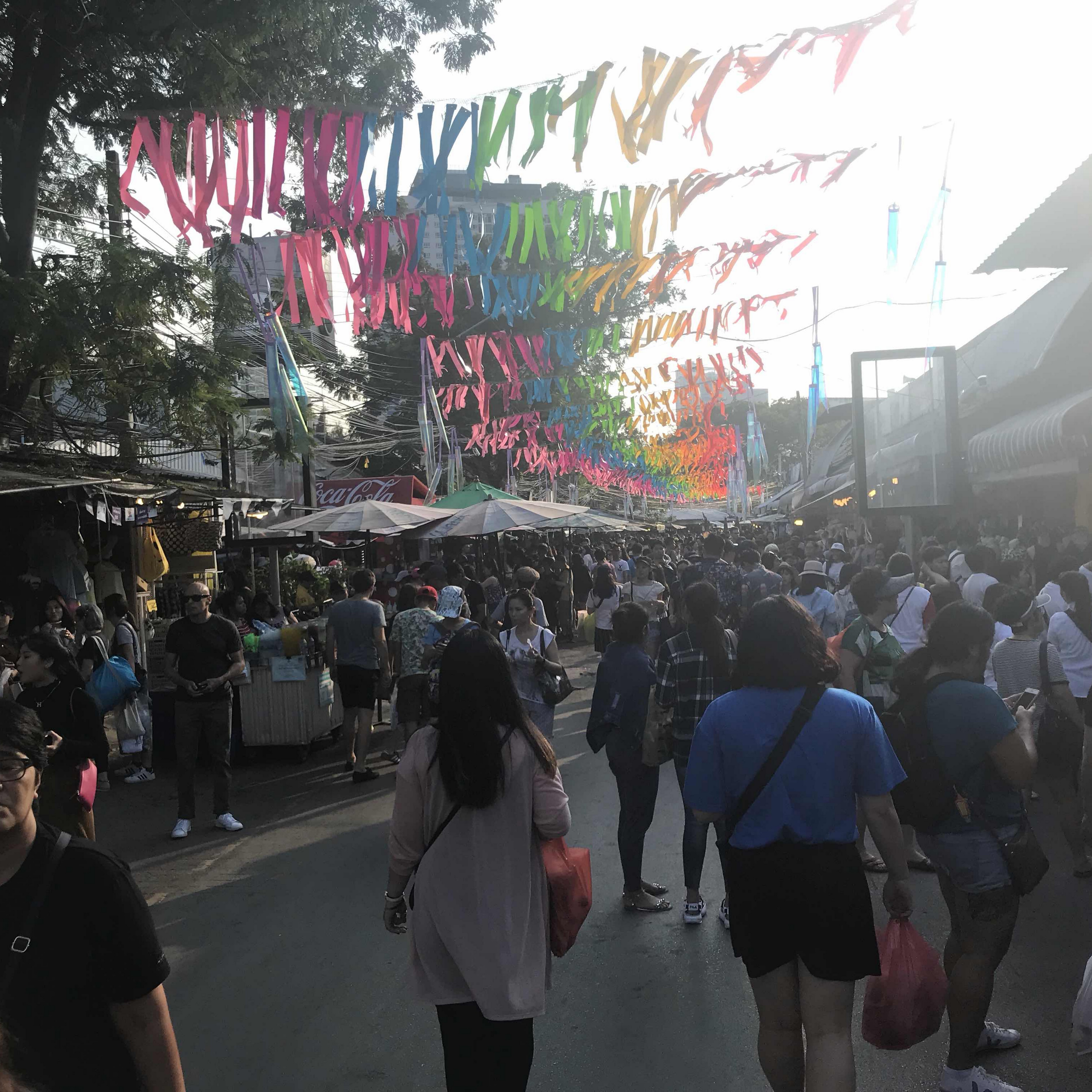 To make my life easier tomorrow, I’m staying at a hotel near the airport (the Vismaya hotel), which has its own free airport shuttle, breakfast, beautiful enormous rooms and a pool to boot. The only downside is that, being close to the airport, it is far from everything else, so when I saw that I had an hour of travel time for my afternoon plans I was mightily tempted to call the whole thing off and just spend the rest of the day by the pool. But, eventually, my good judgement prevailed and I left to take the L to the city!
My big plan for the afternoon was to check out Chatuchak Weekend Market, one of the largest markets in the world which, as the name suggests, opens for business mainly on the weekends (I say mainly because apparently there are some shops that do open in weekdays). It is right next to Mo Chit station, which means I walked right by when I was trying to find the bus station to go to Ayutthaya in what feels like months ago now (it was last week). 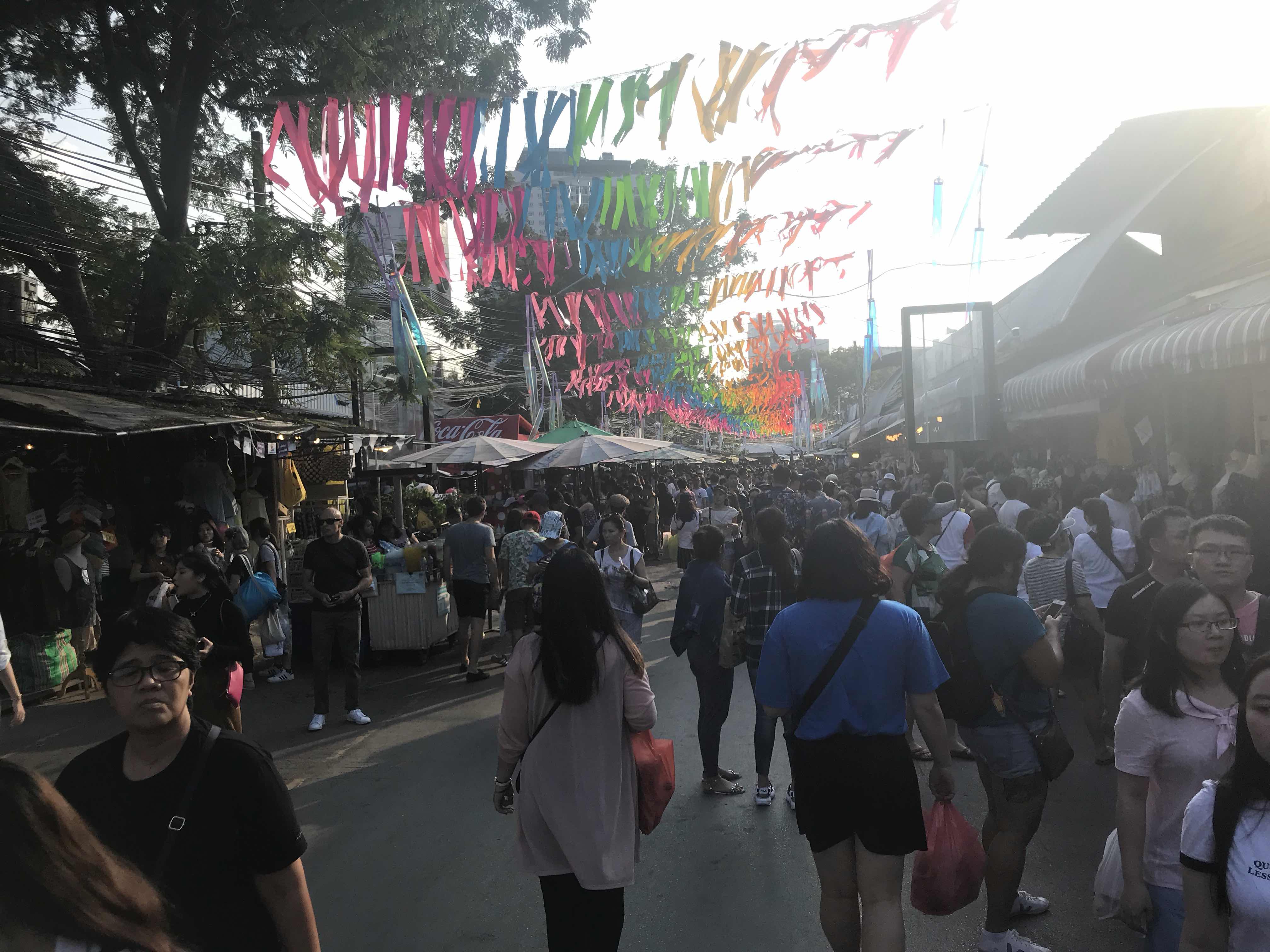 When I walked into the market, I wasn’t very intimidated, because it is covered and so you never see all of it at once. Having looked at the map, though, I knew that it was enormous and also that it’s laid out as several sets of grids, which are labeled by sections and subsections, or soi, so if you’re looking for a specific store, its address will be something like Section 26, Soi 3, Stall 304. I had noted down some of Lonely Planet’s recommendations in this way, but I ended up abandoning them because even with that address I found it impossible to navigate, and even when I managed to find the right address the store had moved to a different one, so I decided to just walk around and improvise. 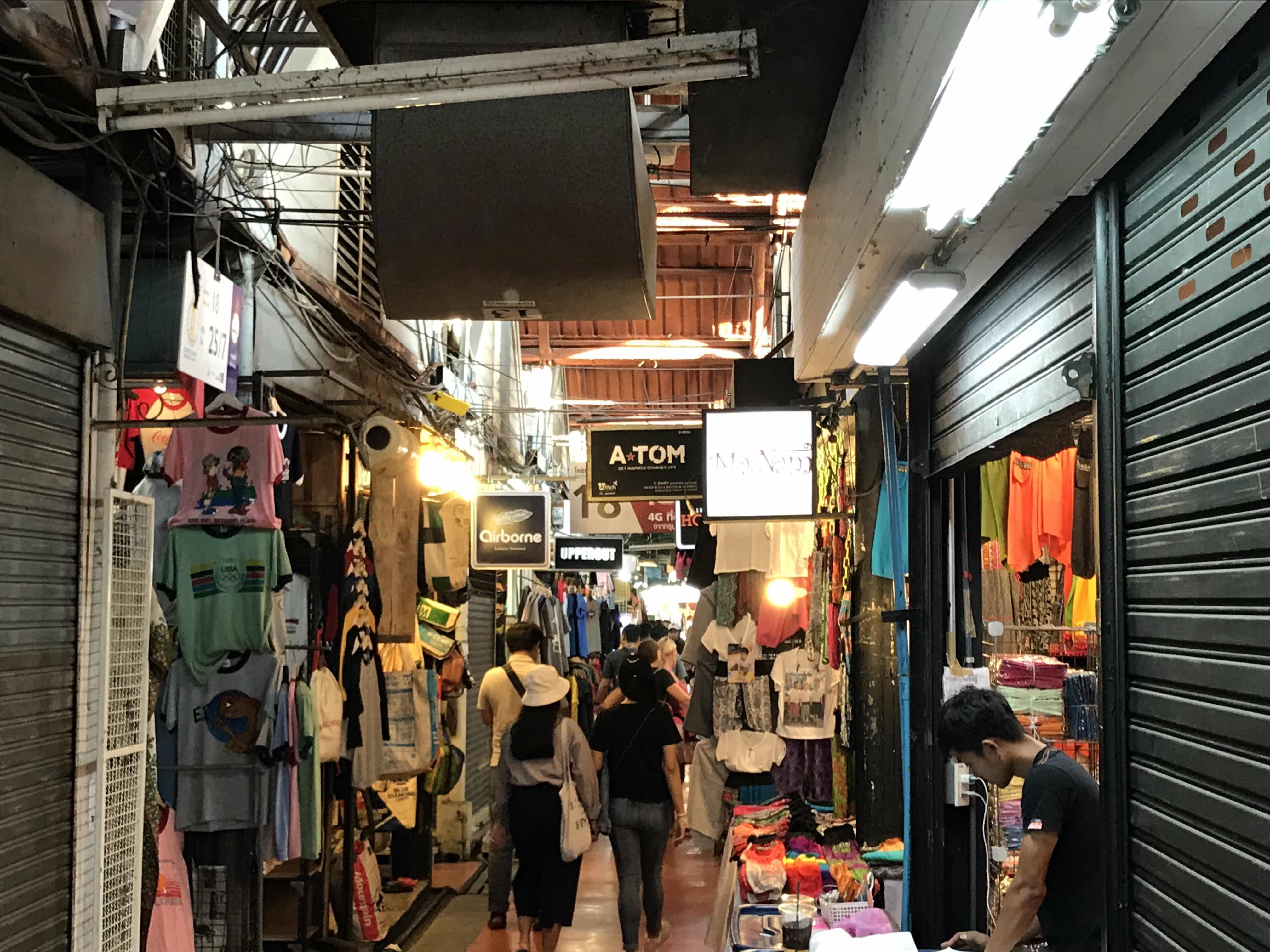 It reminded me of the Istanbul bazaar (you can read about it on this very blog), in that there are endless corridors completely covered with stalls that sell every kind of product imaginable; however, this was at the same time more extensive than the bazaar, and also way narrower, with some alleys that could barely fit two people side by side. Whenever I got lost in these small alleys, which all look the same, I kept walking until I came out onto one of the two or three open-air avenues that serve as the main distribution routes for the market. 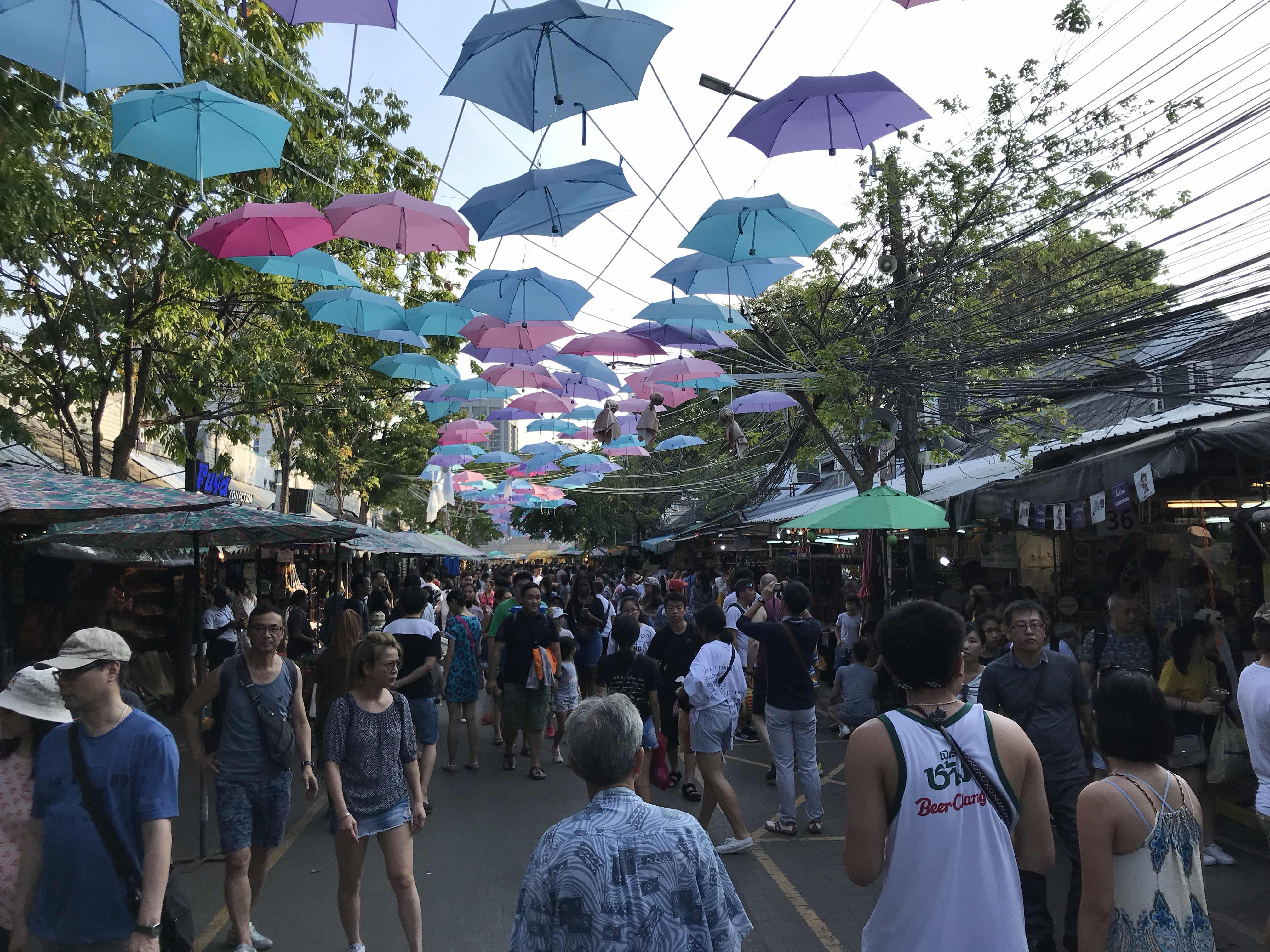 Even though there are obviously lots of stalls selling knockoffs, kitschy trinkets and souvenirs, and other stuff of no interest, there are also quite a few genuinely interesting: spice shops with all kinds of Thai curry pastes, little ceramic plates for your homes, very boho chic clothes (I was reminded of the Crazy Ex Girlfriend line: “like a mermaid who grew feet and went to Coachella”), cheap shoes, sandals and sneakers, quirky T-shirts, even a second-hand bookstore. As I walked the aisles I found lots of intriguing omiyage opportunities, but I have to say there was a certain fight-or-flight pressure to it: whenever I saw something with potential, I knew that I could either buy that thing or renounce it forever, because there was no way in hell I would ever be able to find the same stall twice.
I thought I’d be done quickly but then I got into the groove of canvassing the market and ended up spending like an hour and a half there, and I was still finding unexplored venues! I was happy with my haul, though, so I called it a day and went back on the BTS to go to the Sky Bar downtown.
You see, there’s this tradition I have created for myself when I’m in Japan, all of both times I’ve been there: I like to send off my last night in Tokyo by going up to the New York Bar, inside the Park Hyatt hotel, where Lost in Translation was filmed, and enjoy an outrageously overpriced drink while admiring an endless sea of city lights below me. I wanted to do the same thing for my last night in Bangkok, and I chose the Sky Bar, in the Lebua hotel. You may have seen it in The Hangover 2, although really I’d selected it because it appeared on the Netflix show Travels With My Father. 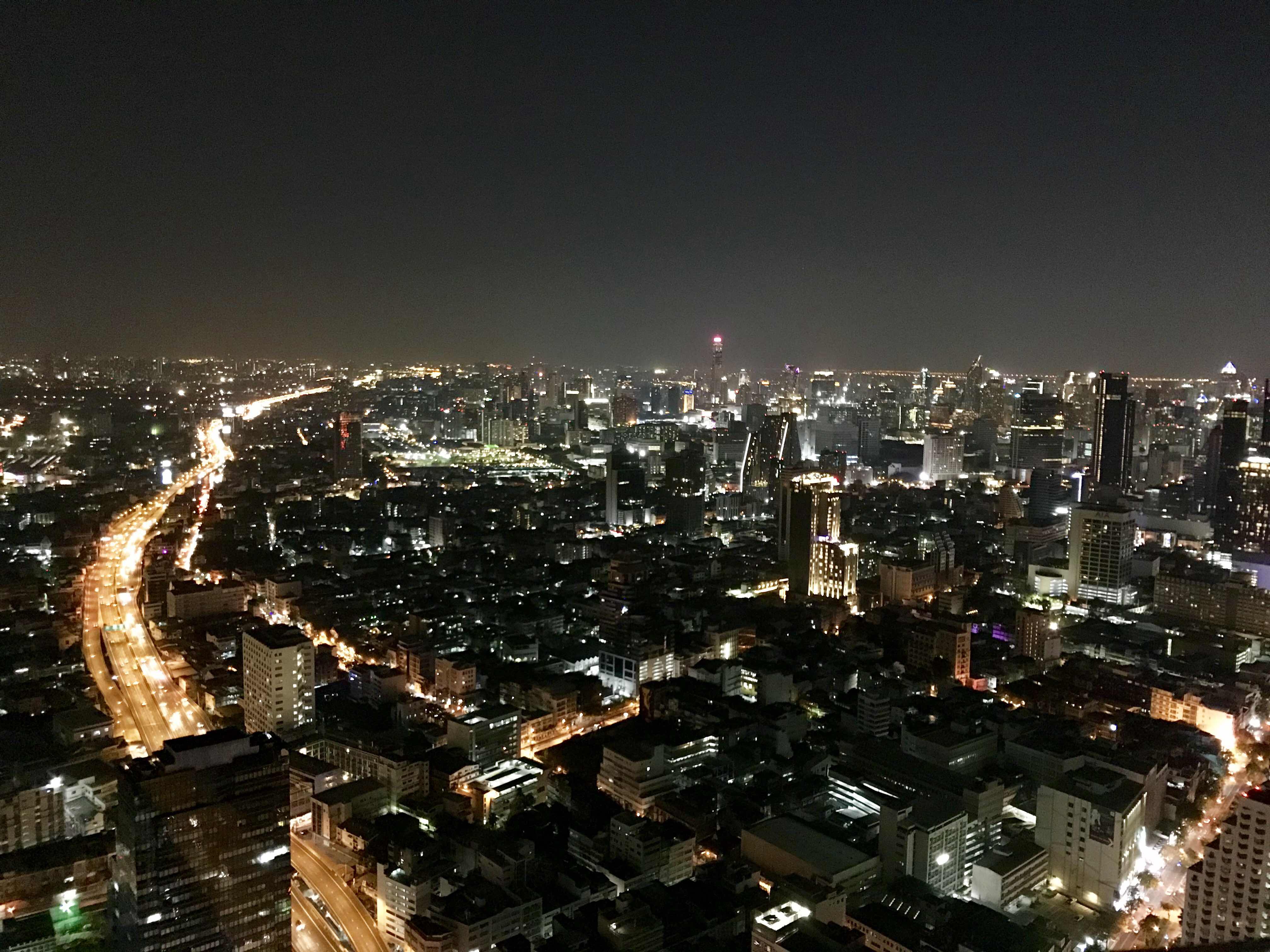 The experience was a lot like Tokyo’s Park Hyatt, in a lot of ways: going in the place became really upscale in a neighborhood that is otherwise not. There were lots of employees hanging around just to tell visitors where to go, and once on the 64th floor, I was escorted to the small terrace that is the Sky Bar -turns out the Sirocco, the restaurant, occupies a separate half of the same floor. The bar here wasn’t very large, but there was nearly one waiter per patron, all of whom spoke flawless English, also like at the Hyatt. I ordered my overpriced drink, a 450 THB tonic (€12), and… it was all worth it. 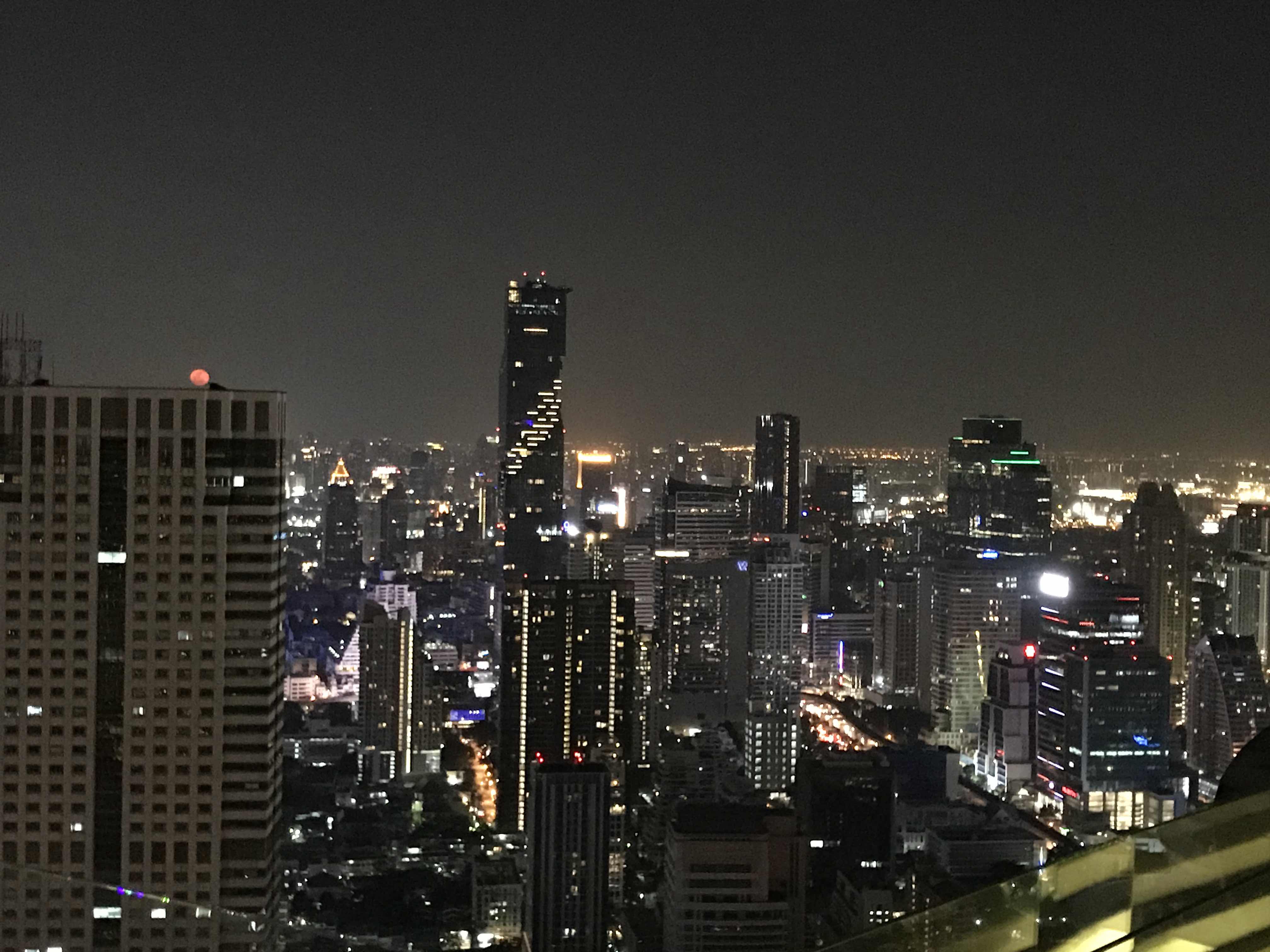 Walking out onto the deck and seeing the entire city sprawled below me was an incredible experience. I was awash in the city lights and the traffic and the lit skyscrapers. The MahaNakhon building shone nearby, and further in the distance I was able to make out Wat Pho and Wat Phra Kaew, some of the first monuments I visited in Thailand.
Like in Tokyo, I could have easily spent all night just looking at the city, wondering what people were doing at that moment or what interesting places were hidden there, but eventually I resigned myself and left. On the way out, perhaps because I’d tipped, the waiters let me take a peek at the other side of the terrace, where I could see the Sirocco restaurant as well as the view of the other half of Bangkok. 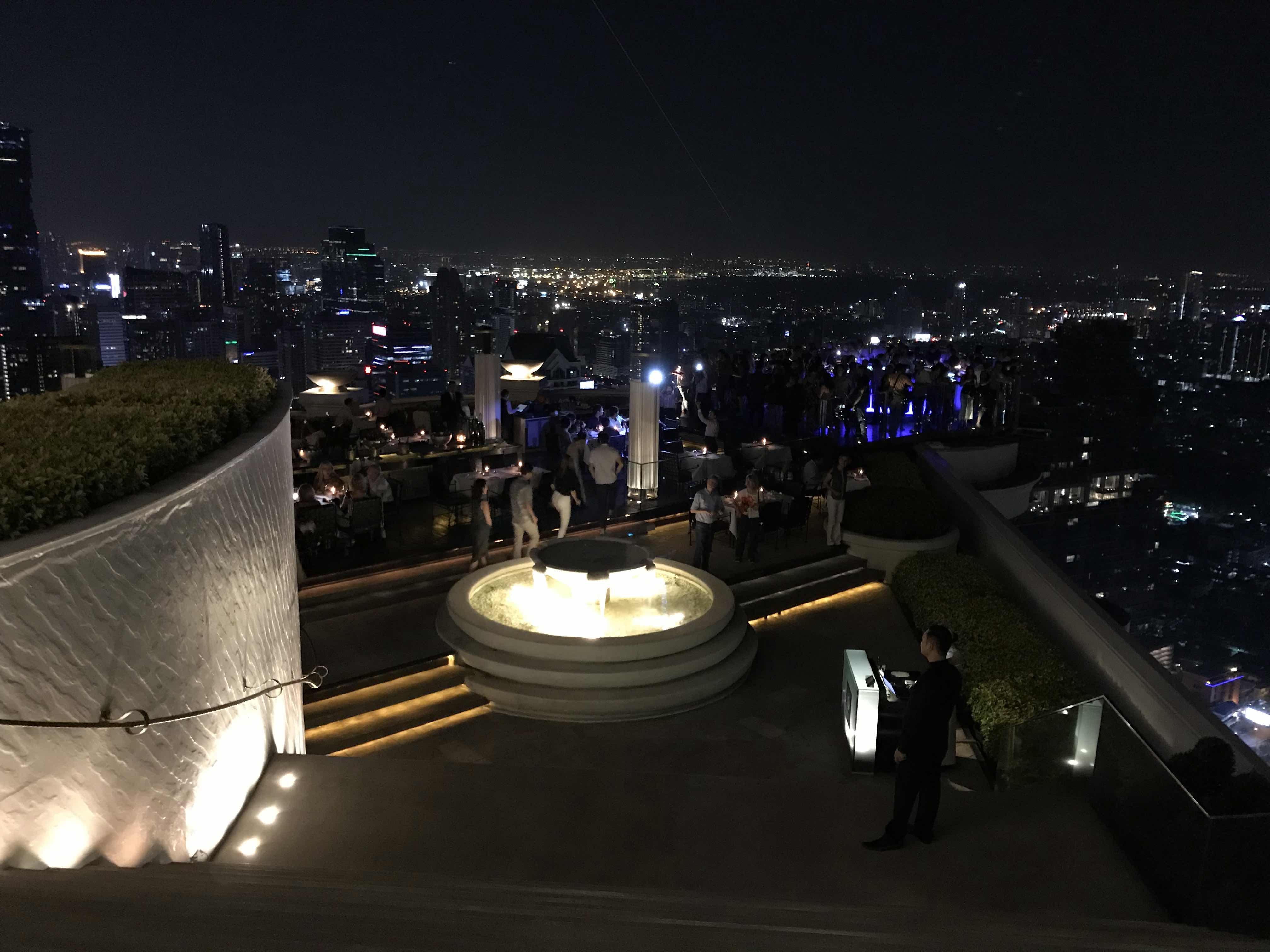 All in all, I couldn’t have hoped for a better goodbye to Bangkok: a productive and fun shopping outing, followed by an atmospheric toast to the night sky. I can go back home satisfied and fulfilled!