My plan for today had been to go to Ko Phi Phi, but to my dismay Maya Bay (the beach from The Beach) is closed! Thailand had closed that and several other areas for around six months earlier in the year, to allow the environment to regenerate after the damage done by excessive tourism, and they were supposed to reopen in October; unfortunately, they have extended the closure indefinitely. It’s good that they’re taking steps to preserve the place… but it hurts to come all this way and not get to see it!

Instead, my hotel redirected me to a Four Island tour, which as the name implies revolves around visiting four different islands around Ko Lanta. Once again I was picked up by a speedboat from the beach outside the hotel.
Our first stop was Ko Ngai, a tiny island with a beautiful, narrow beach. They basically dropped us off to our own designs; I opted not to snorkel, since I did that all day yesterday and the water didn’t seem clear (not dirty, necessarily, but it had lots of leaves and twigs and it was foggy with sand). I took a walk up and down the beach instead, careful not to trip with the ropes of the longtail boats. The landscape here reminded me a bit of Halong Bay, because the horizon was dotted with undulating islands like fingers protruding from the sea. 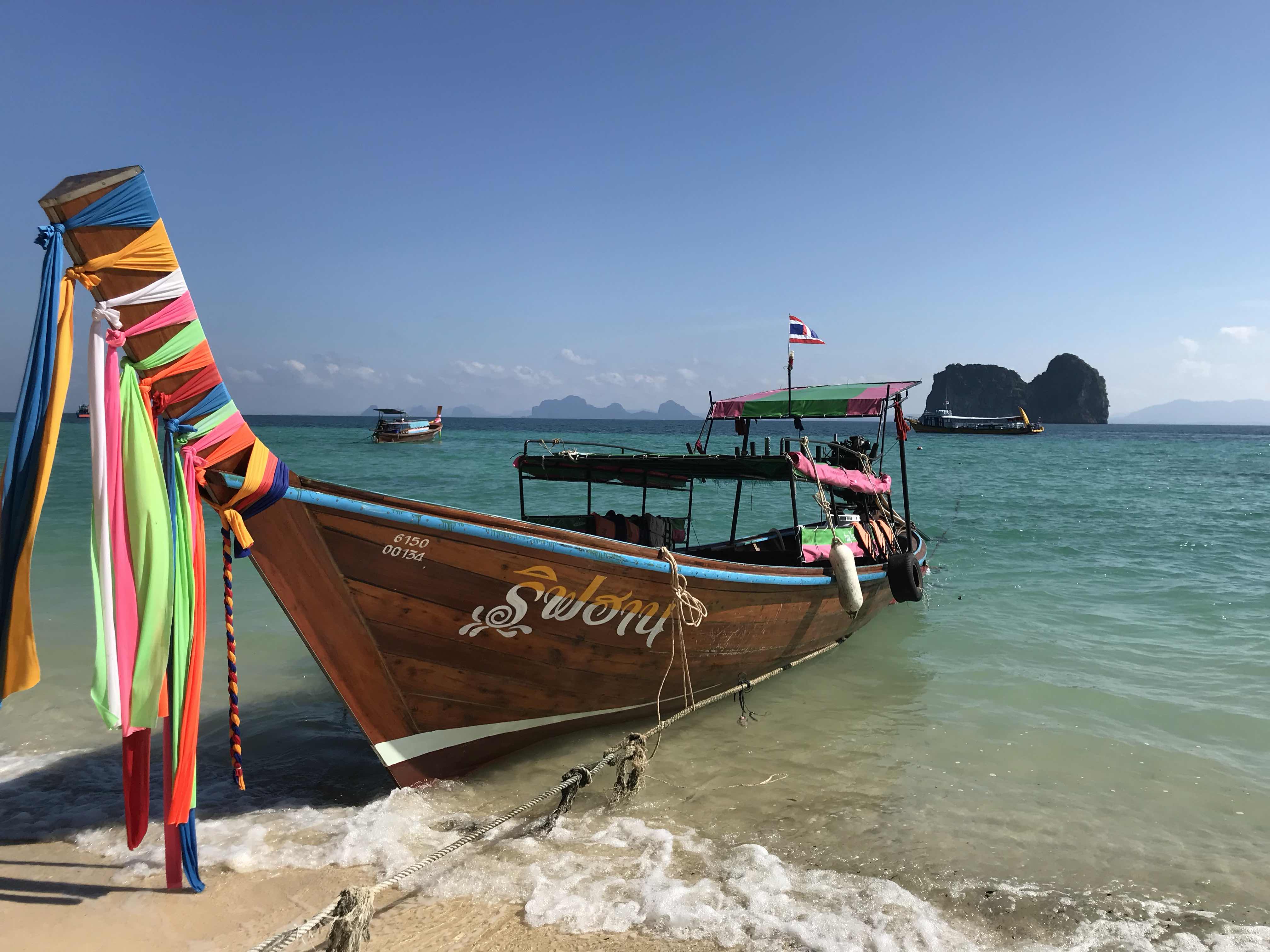 Next up we rode to Ko Chueak, which isn’t an island so much as a big, jagged rock in the middle of the ocean. We got to snorkel here for a bit, but it was disappointing compared to yesterday’s experience: the visibility underwater was terrible, and while I could see the ocean floor it was hard to make out much detail. At first there didn’t even seem to be any fish, but when my eyes adjusted I noticed that there was an entire school of fish, each the size of my hand, swimming stationary against the current, all hidden under a rock’s shadow. 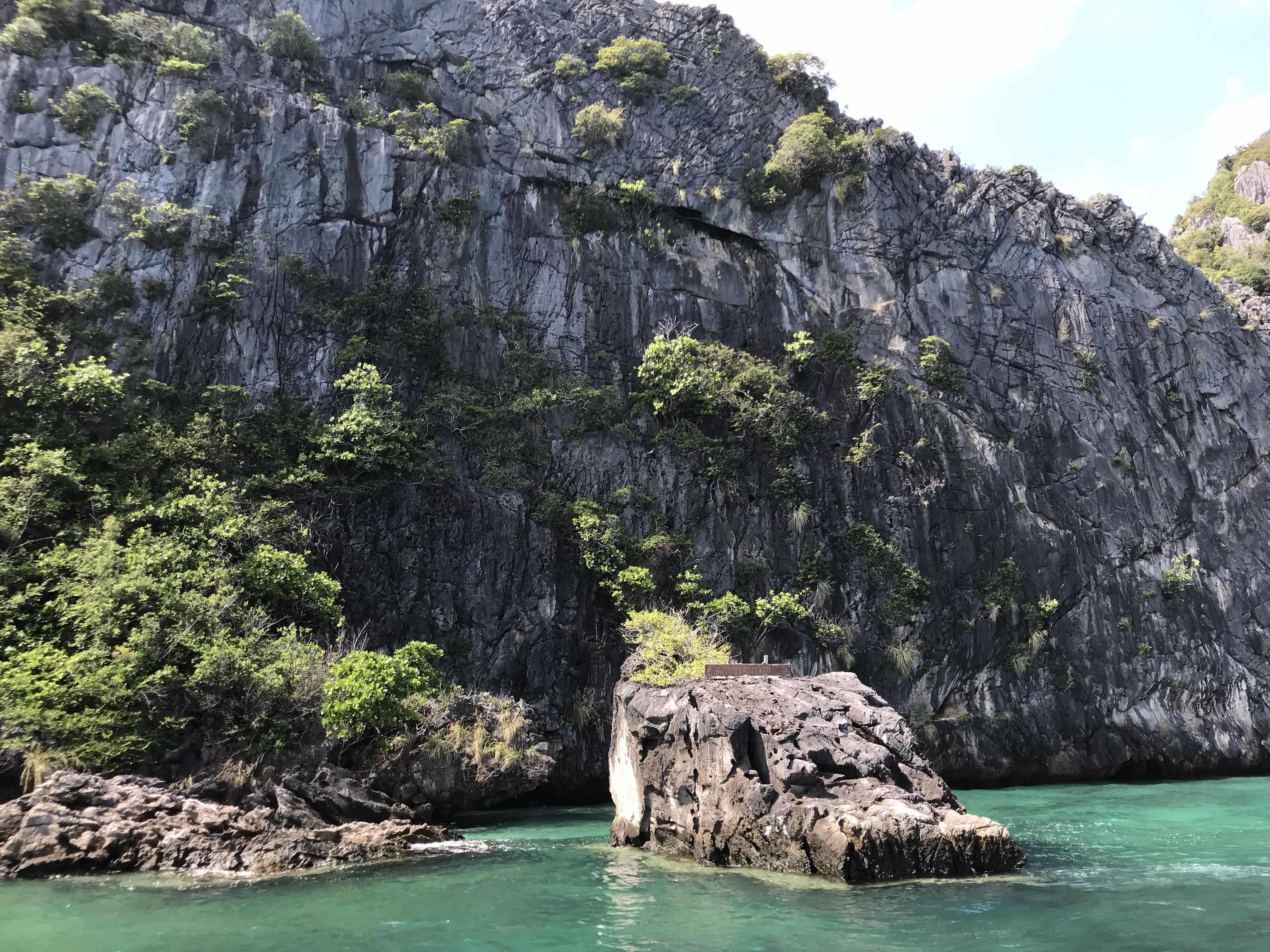 After that they took us to Ko Kradan, which is the closest thing yet I’ve seen to the postcard ideal of a paradise beach: crystal clear water, golden sand, just a few metres from the jungle, all ocean except for a few irregular islands on the horizon. We had lunch here, and then some time to kill. I walked the length of the beach, snapping pictures, trying to find a balance between having my feet on the water and walking in the shade, because the sun is unforgiving here (I’ve avoided getting sunburn so far by being very paranoid, except for a patch on my back where I couldn’t reach with the sunscreen!). 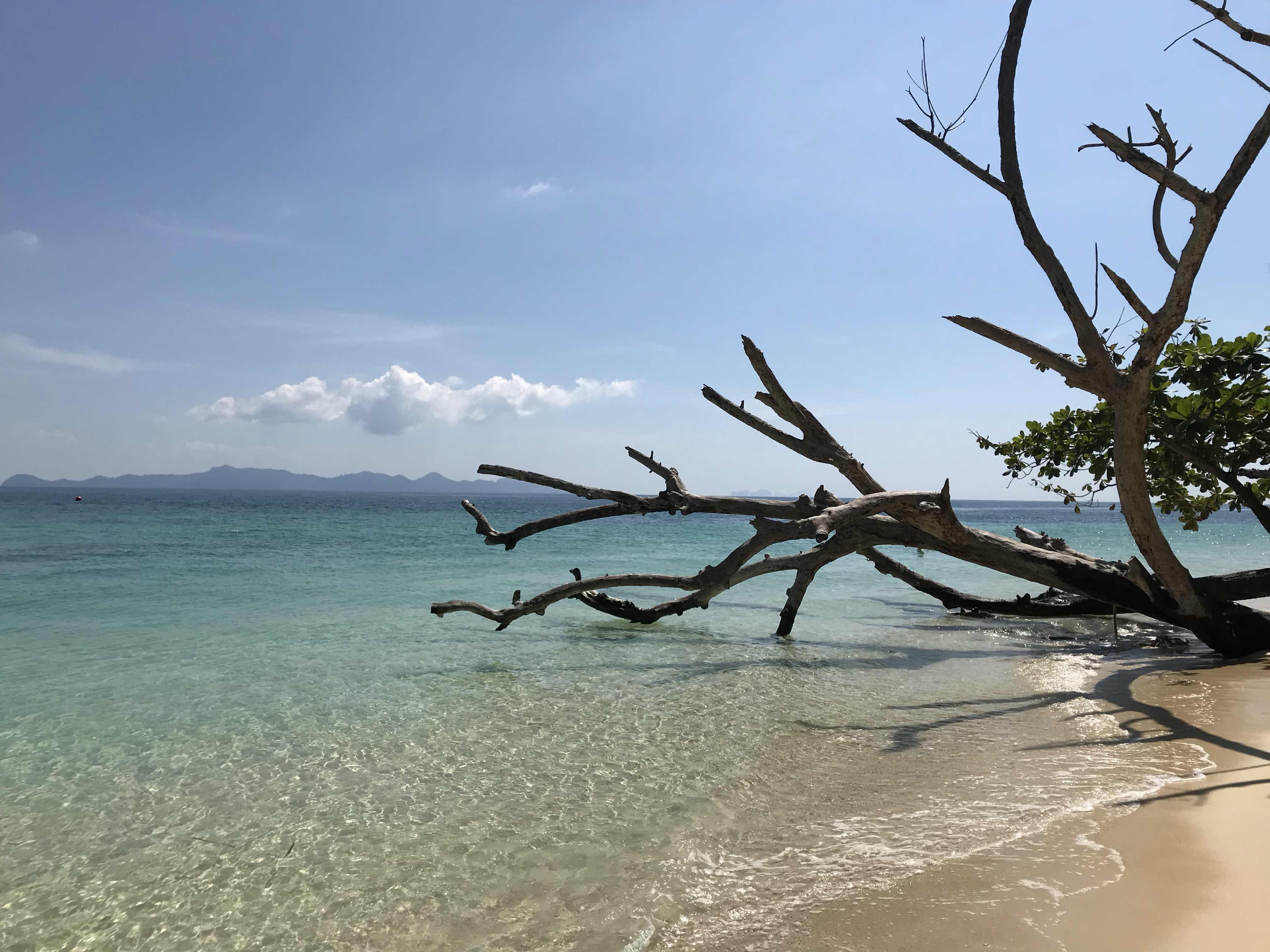 Then I tried snorkeling here again, and while the water was clearer the floor was mostly sand so there were only a few fish to see: clouds of tiny fish, some of those really long fish from yesterday, and occasionally even one really large, rounded fish with blue accents (I am clearly not up to speed on my marine biology). In the end, I was happier leaving the water and enjoying the scenery from the surface, because it was just hard to believe this place was real, even despite the groups of tourists walking around like me. 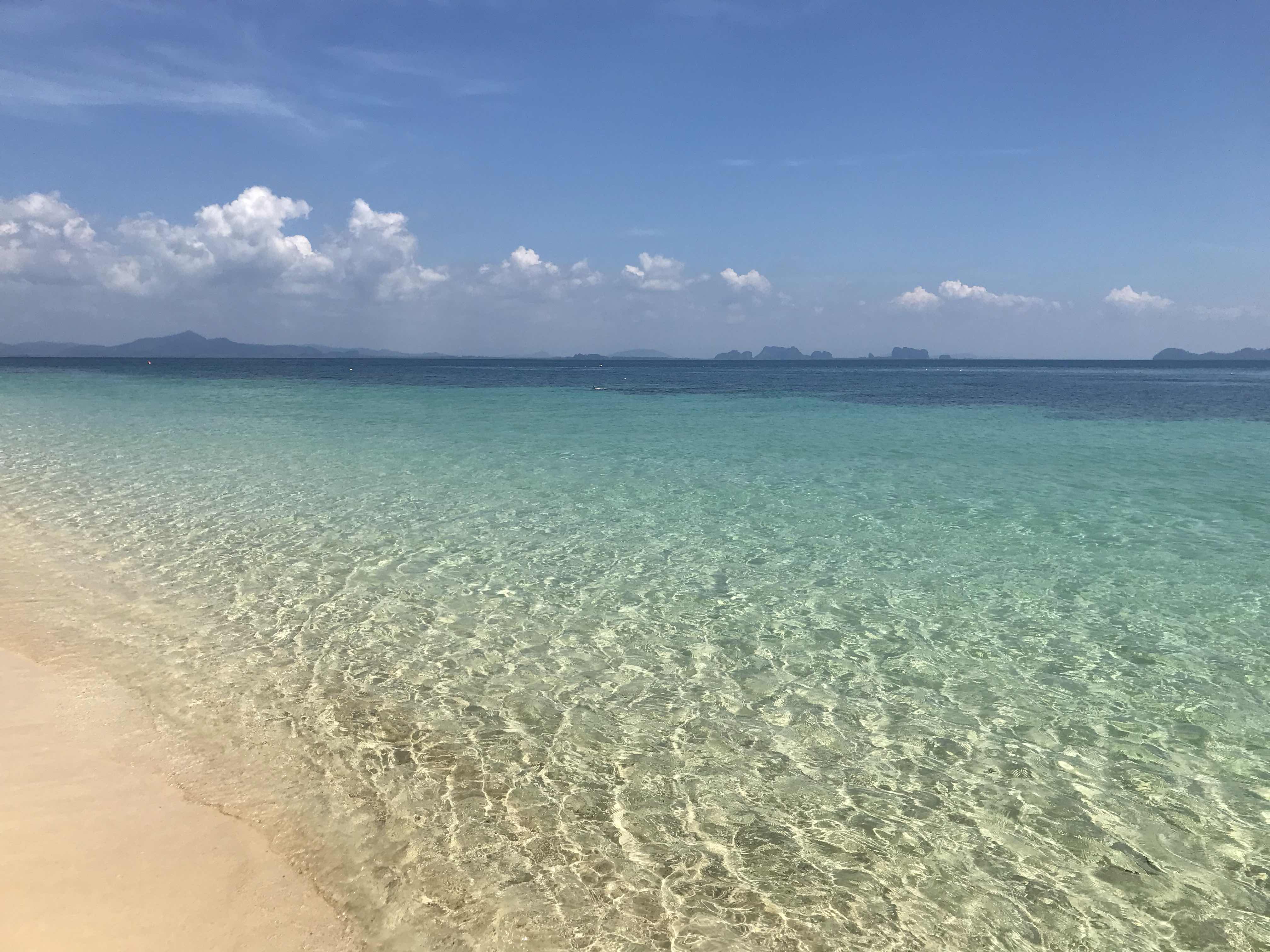 Eventually we left this spot of paradise and moved on to our last island, Ko Muk. I had no idea what this one was about, so I was a bit surprised when they told us to just get off the boat and into the water next to a nearly vertical stone wall of an island, but not for snorkeling, just swimming. Once again they offered lifejackets and flippers to people who weren’t very confident swimmers, but I thought they might hinder me more than they’d help as I’m used to swimming without equipment.
Then they told us we’d be swimming into what looked like a cave; reader, I was not thrilled about this development, considering the news anout Thai caves we had this year! *Not* going into caves was one of my explicit goals for this trip!
The swim inside the cavern was manageable: 80 m all on a straight line, the main difficulty being the darkness and the other people swimming around me. Eventually we reached the other side and what I saw when I emerged from the tunnel made everything worth it. 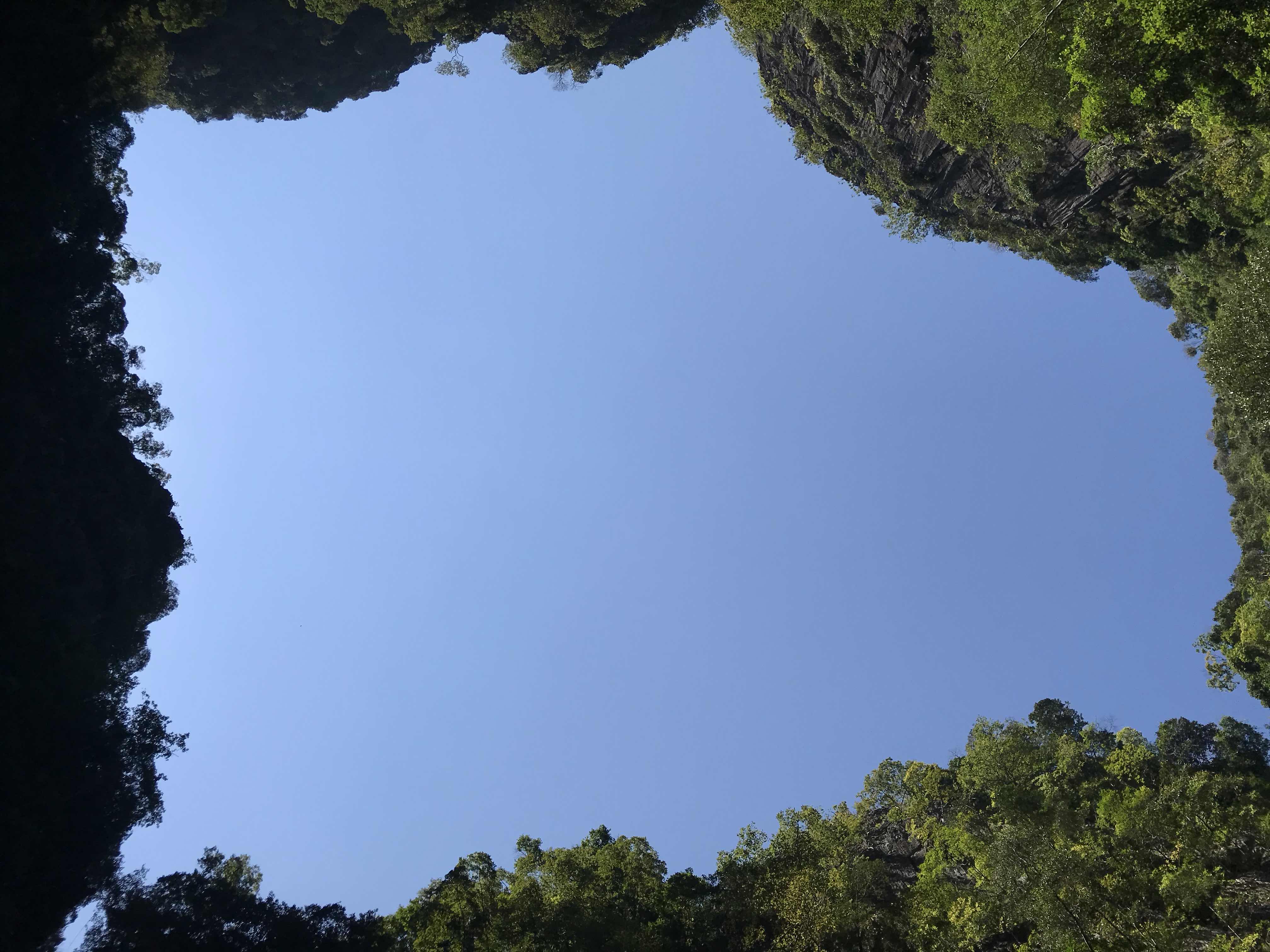 We were in a natural lagoon, a canyon surrounded on all sides by tall, vertical walls of rock with trees somehow growing on them. The cavern we had just come out of was the only access. It was a strange sensation to be in this hole in the mountain, enclosed on a tiny beach looking up at the sky. The place was pretty crowded with day trippers (including dozens of Chinese group travellers who all formed a literal conga line to walk back out), but as I’ve said before on this blog, if you refuse to coexist with other travellers you’ll end up missing out on beautiful places that aren’t any less noteworthy for being popular. 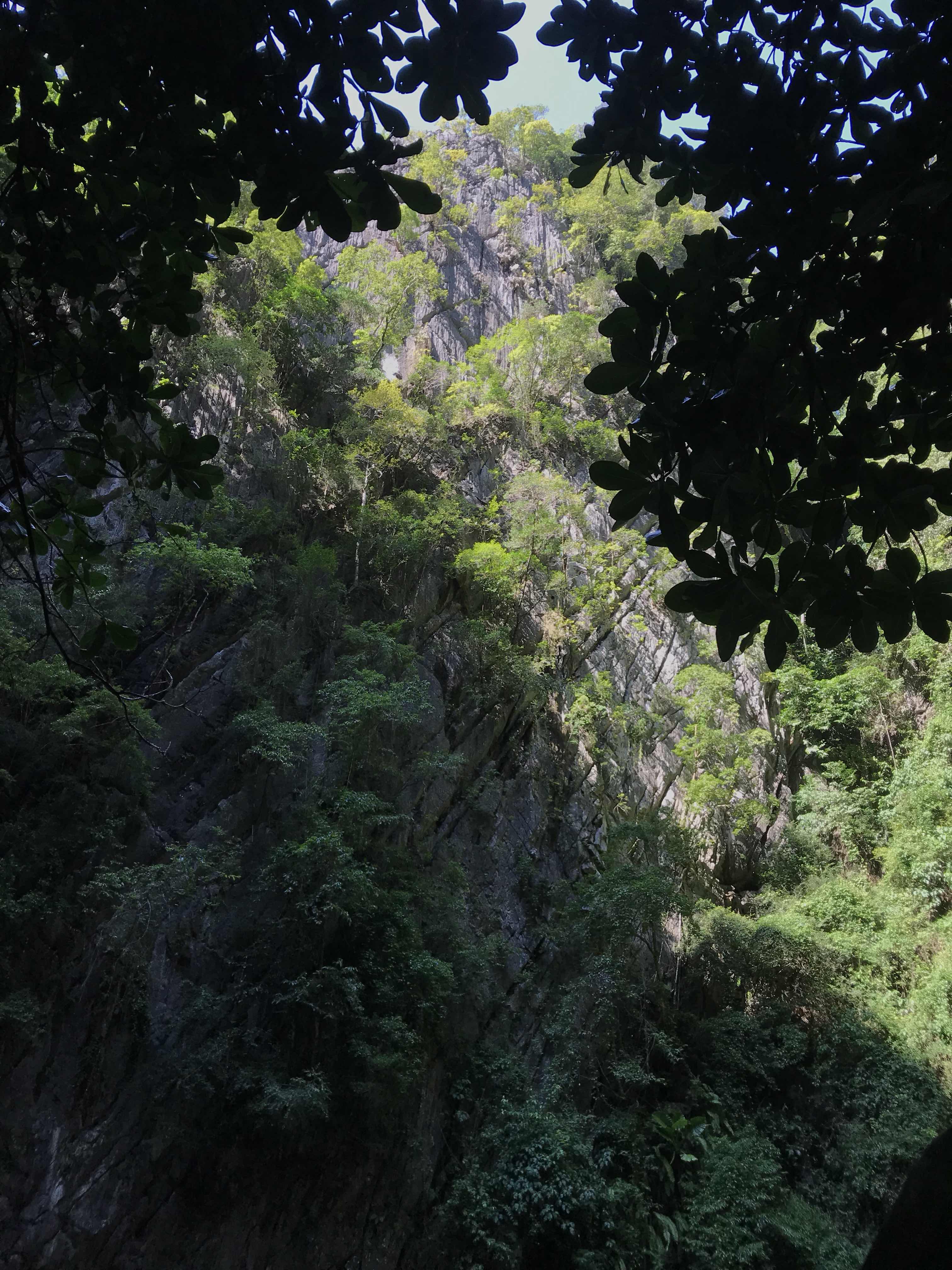 I spent a while just marvelling at the forested walls from every angle, but eventually it became time to leave. I swam back out, making sure to steer clear of the rough, barnacle-covered rocks, and got back on the boat. From here it was a half-hour ride back to Ko Lanta, and this time they dropped me off directly on my hotel’s beach, saving me an additional ride on a death trap! 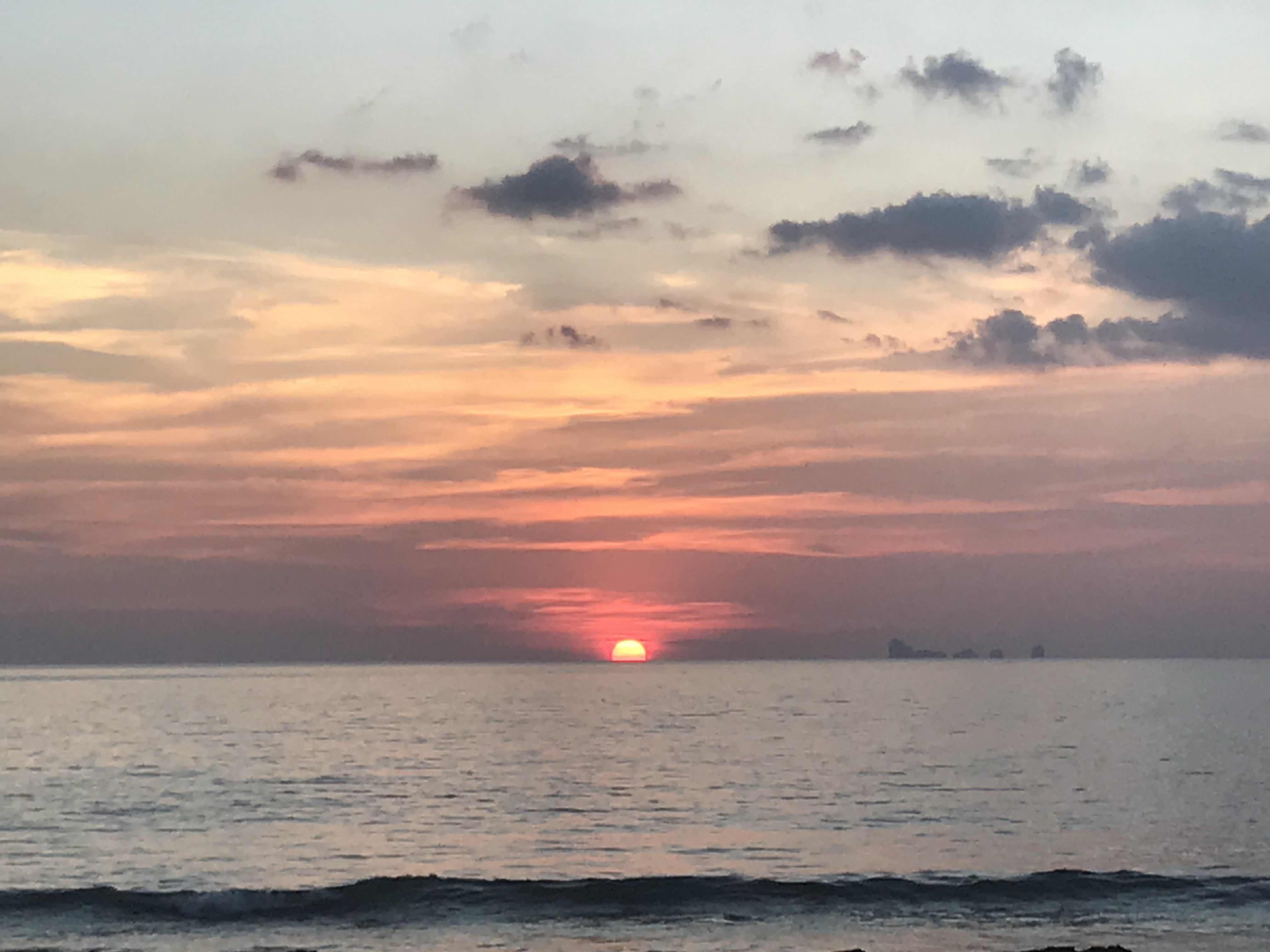 Like yesterday, I rested a little, and then came out to watch the sunset. Since the beaches here all face west, all of Ko Lanta is a prime sunset-viewing platform.
This is it for my tropical island experience! Tomorrow it’s an early flight back to Bangkok (I can hardly imagine a harsher contrast with the lazy quiet of this island!) for just one night before flying back to Paris. That’s also going to be a harsh contrast…