First day of the island! Today I was booked on a snorkeling tour of two nearby islands, Ko Rok and Ko Ha. I got up bright and early for my pickup at 8:00, only to be told that (despite what my voucher said) pickup actually started at 9:00, and by the way, we’re still setting breakfast buffet. Suffice to say that this did not endear them to me…

Anyway, eventually a large speedboat approached the resort’s beach and picked me and two couples up to join around twenty people total on the tour. We rode for about half an hour to reach our first destination, the island of Ko Rok: a large enough island that seemed densely forested; it must be a natural park, because there was no development to be seen. The water was clear enough that you could see all the coral and rock formations from
The boat stopped closed to the island, and simply let us swim and snorkel for a while. They provided us with all the equipment we needed and then some: some people put on flippers and life jackets, whereas I was happy just with the diving mask and the snorkel. (The lifejacket ends up working against you in a way for snorkeling, as it pushes you up when you want to be looking down.) 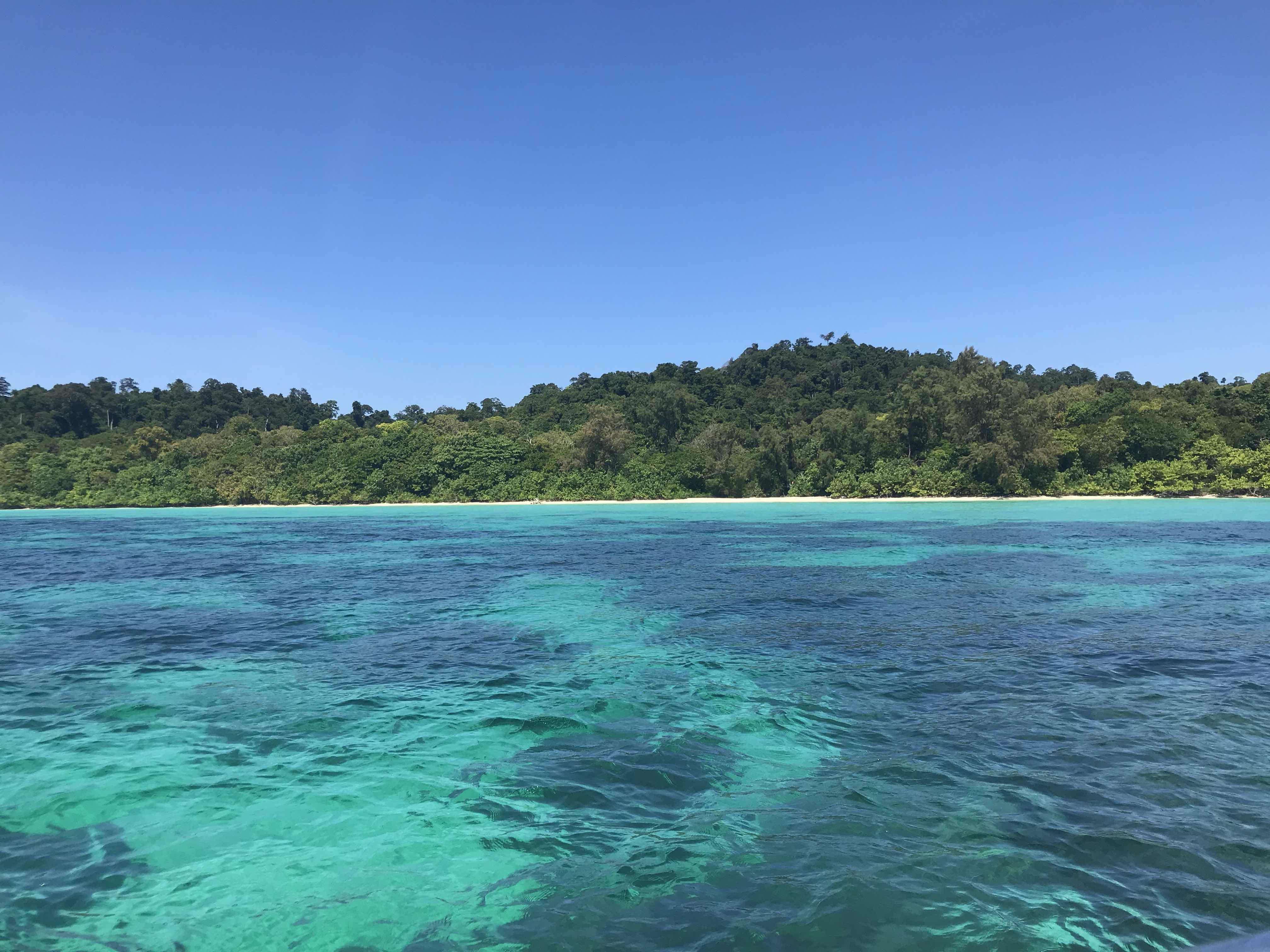 So I dove into my first snorkeling experience! First thing I noticed was that the water was exactly the right temperature for a swim, fresh but not cold, so you could spend as long as you wanted in it without so much as a shiver. The water was not quite as crystal clear as in the movies, but the visibility was great for our purposes. It’s shocking how full of life the sea was: there were fish of all kinds around, and while the general look wasn’t as colorful as Finding Nemo would have you believe, there was a lot of variety around. I would often look up and find myself surrounded by a school of black and yellow striped fish, who didn’t seem even a little bit scared of me: they just swam past or around me, indifferent to me whether I was floating still or following them along.
I’d bought a waterproof sleeve for my phone so I could swim with it and take underwater pictures, in case I came across Atlantis or Nemo or something. It’s proven effective in keeping my phone dry underwater, but it’s awful for pictures because when the phone isn’t unresponsive the pictures it does take all come out blurry and out of focus. So, the underwater pictures here will be terrible, but they’re all I’ve got! You’ll just have to take my word for it that it was a lot more defined and vivid live. 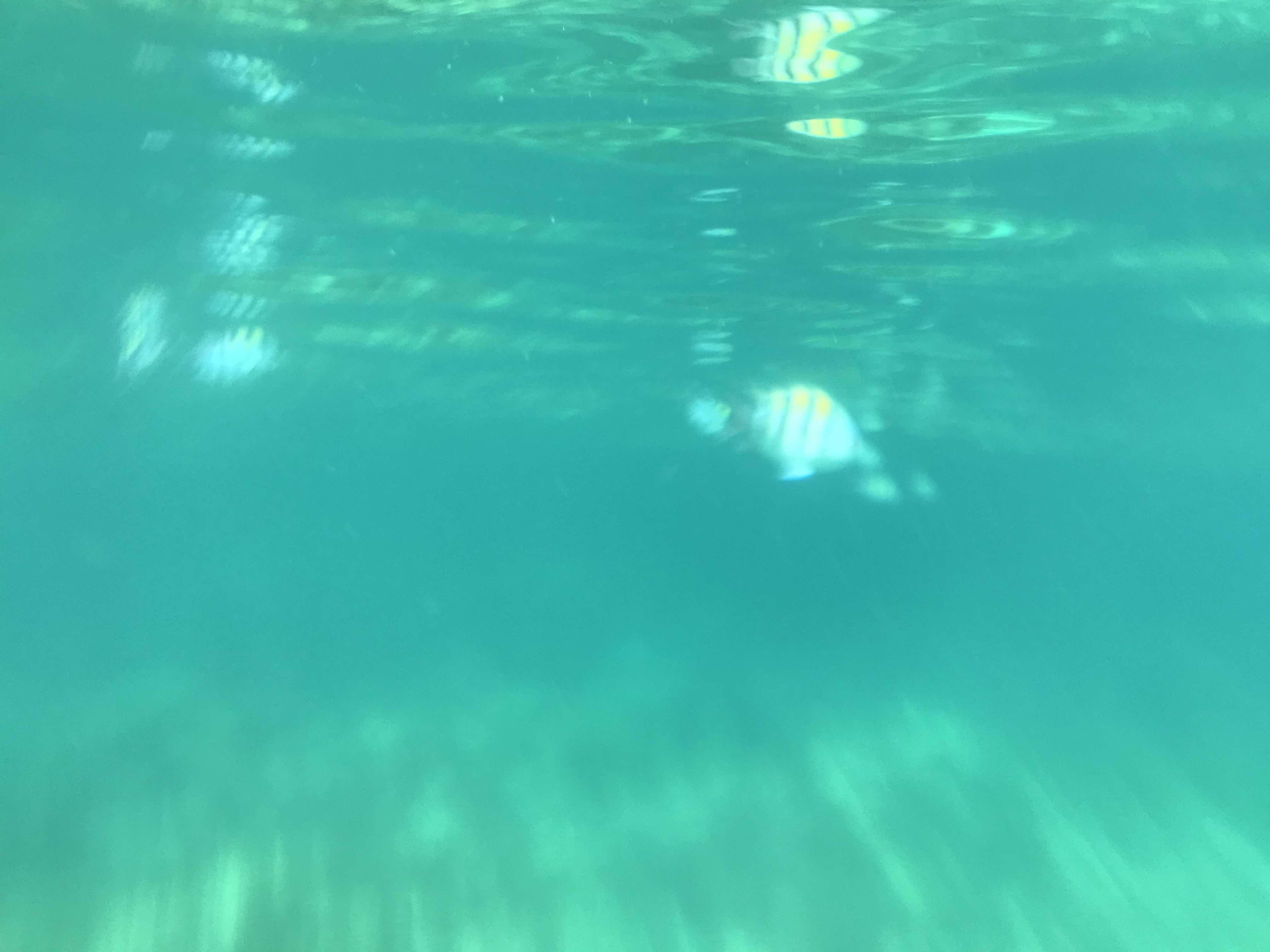 We snorkeled on two different spots on this island, before disembarking on a beach for lunch. Something that seemed to be the headquarters of the park rangers had set up a big area in the light forest right off the beach with tables and benches for tourists to eat while on their tours, and that’s what we did. Despite how crowded it was, this beach had the clear white sand and pristine turquoise water that I’d only seen on pictures. I kind of wondered if it really existed; it does! 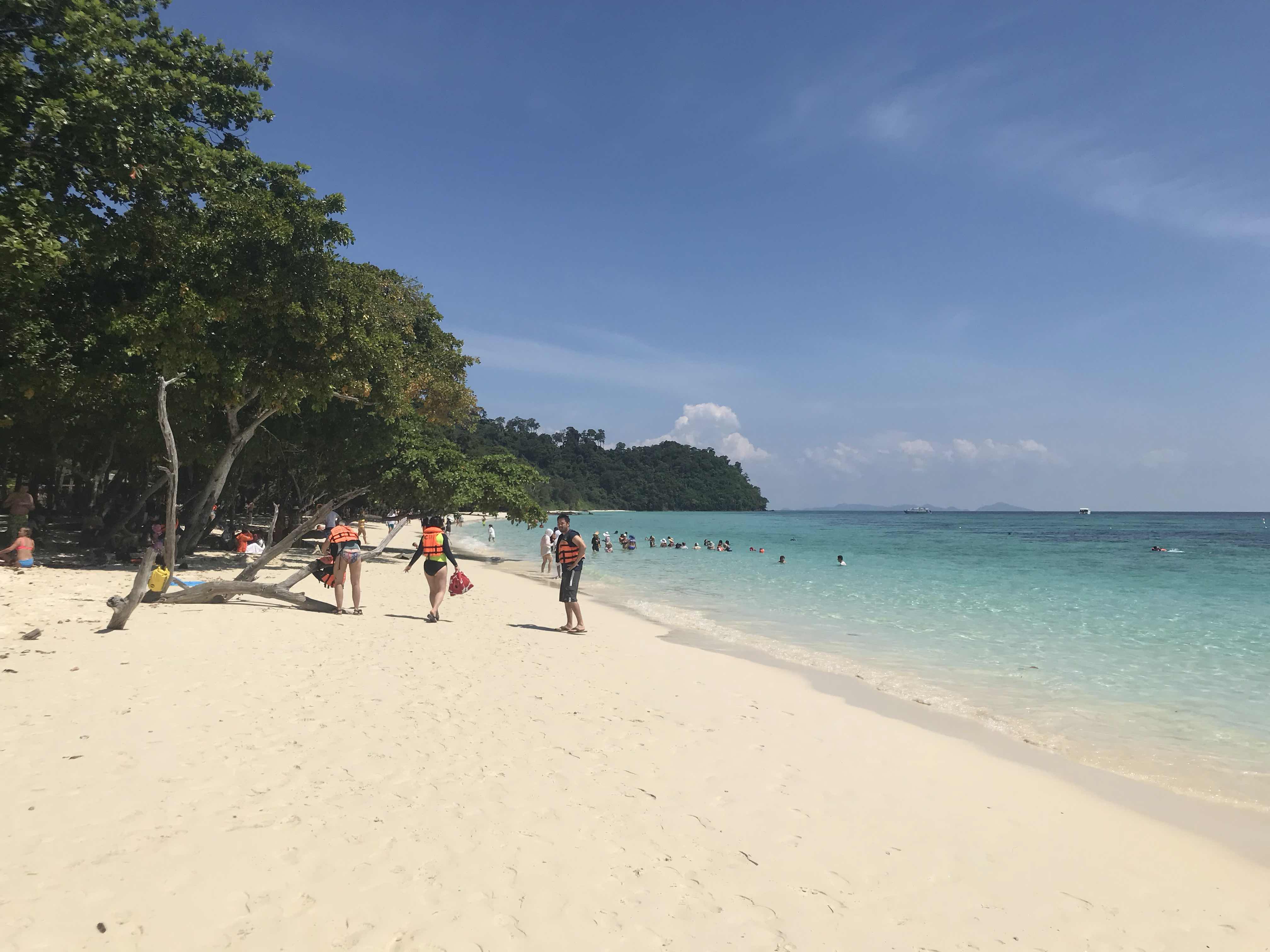 After a forgettable lunch, we took off again for another half-hour ride; each one goes far enough that the island almost fades into the distance by the time you get to the next one. This one took us to the island of Ko Ha, which from where we stood seemed only like a small rock with a beautiful, tiny beach on one side, and several karstic formations jutting out of the water around it. It was really picture-perfect! 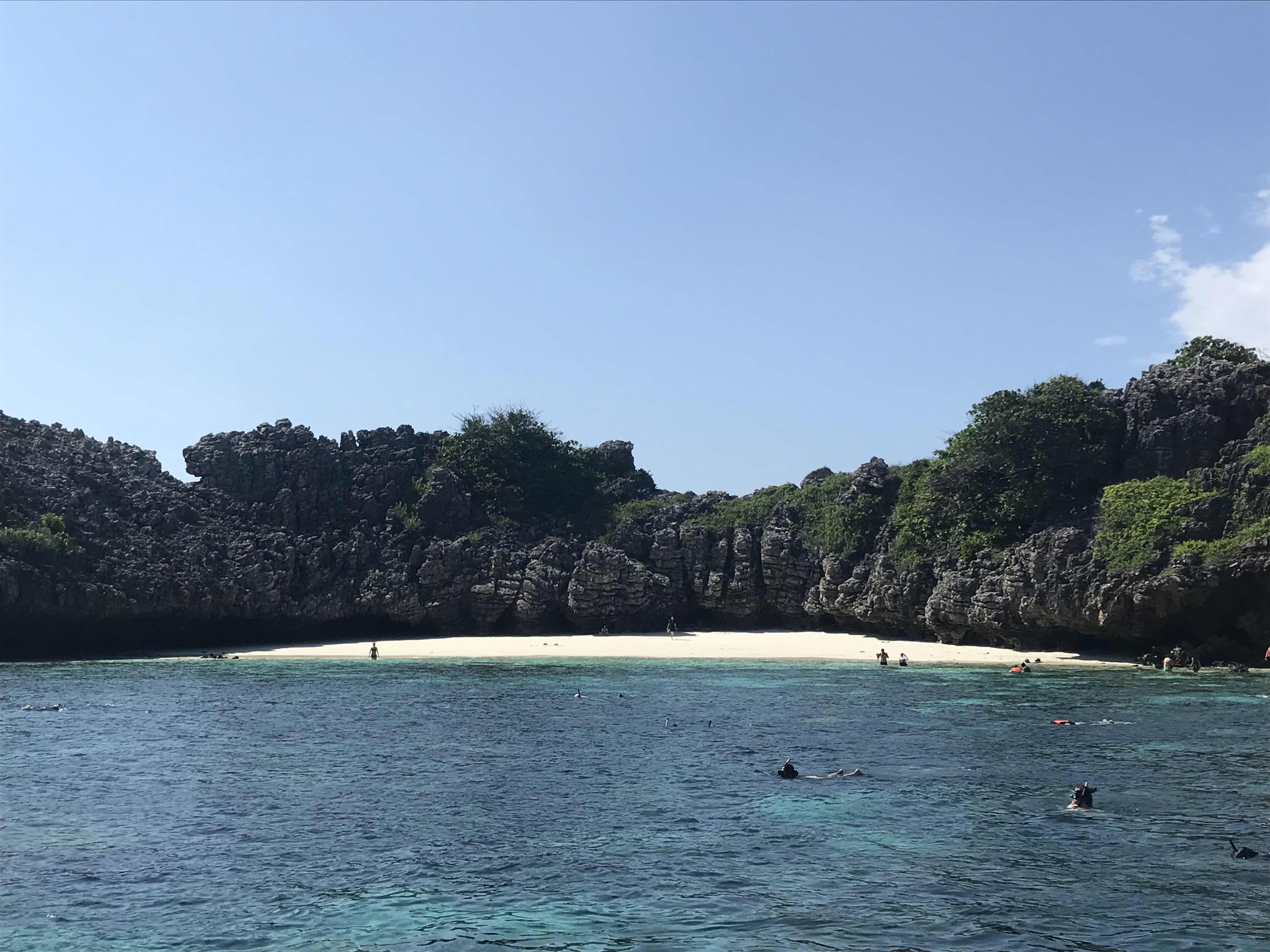 We snorkeled here some more. The water was noticeably colder here, probably due to water currents because I could feel myself being pushed at regular intervals towards the shore. The coral was way larger and mire extensive; mostly brown, but when I looked I saw little blue fish, eels, what looked like a barracuda (an American woman on the tour later said that on Hawaii they sing: “If you put your hand in the crack / you won’t get it back!”), and strange elongated fish with long thin noses. I wish I knew more fish names to be able to tell them to you!  I even saw a black and white striped sea snake slithering away between rocks; it looked like the sand worms in Beetlejuice, only smaller. 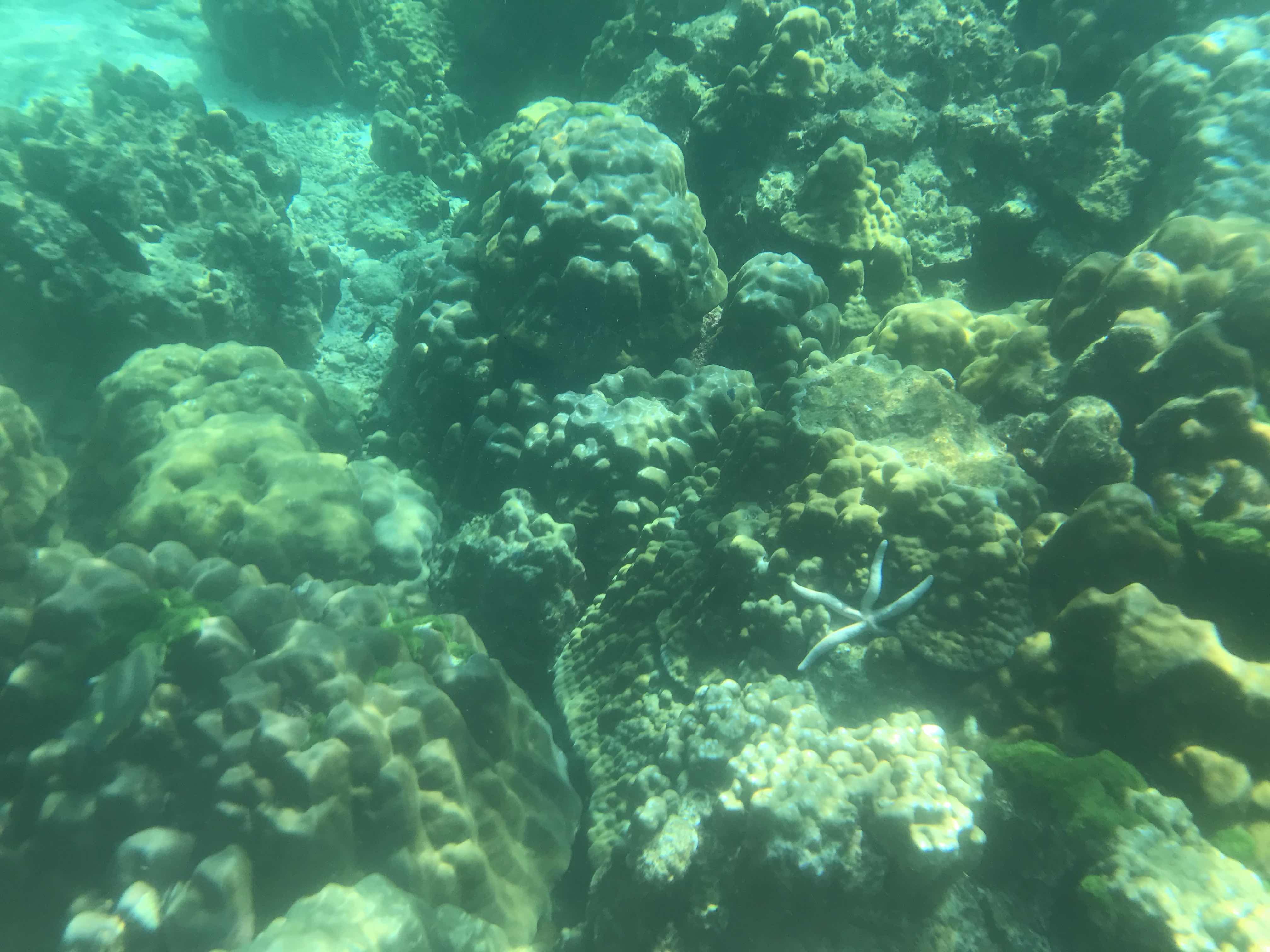 There were blue starfish, black fish with luxurious, undulating fins the kind you see in aquariums, and that kind of yellow and black two-dimensional fish with a very long top fin, you know the one. As touristy as the place is (we were never the only group at any given spot), most of the time I had an entire area for myself, with no one in sight, hearing only my own breathing through the snorkel like a sort of marine Darth Vader -a Darth Wader, if you will- floating slowly above an uncaring ecosystem. 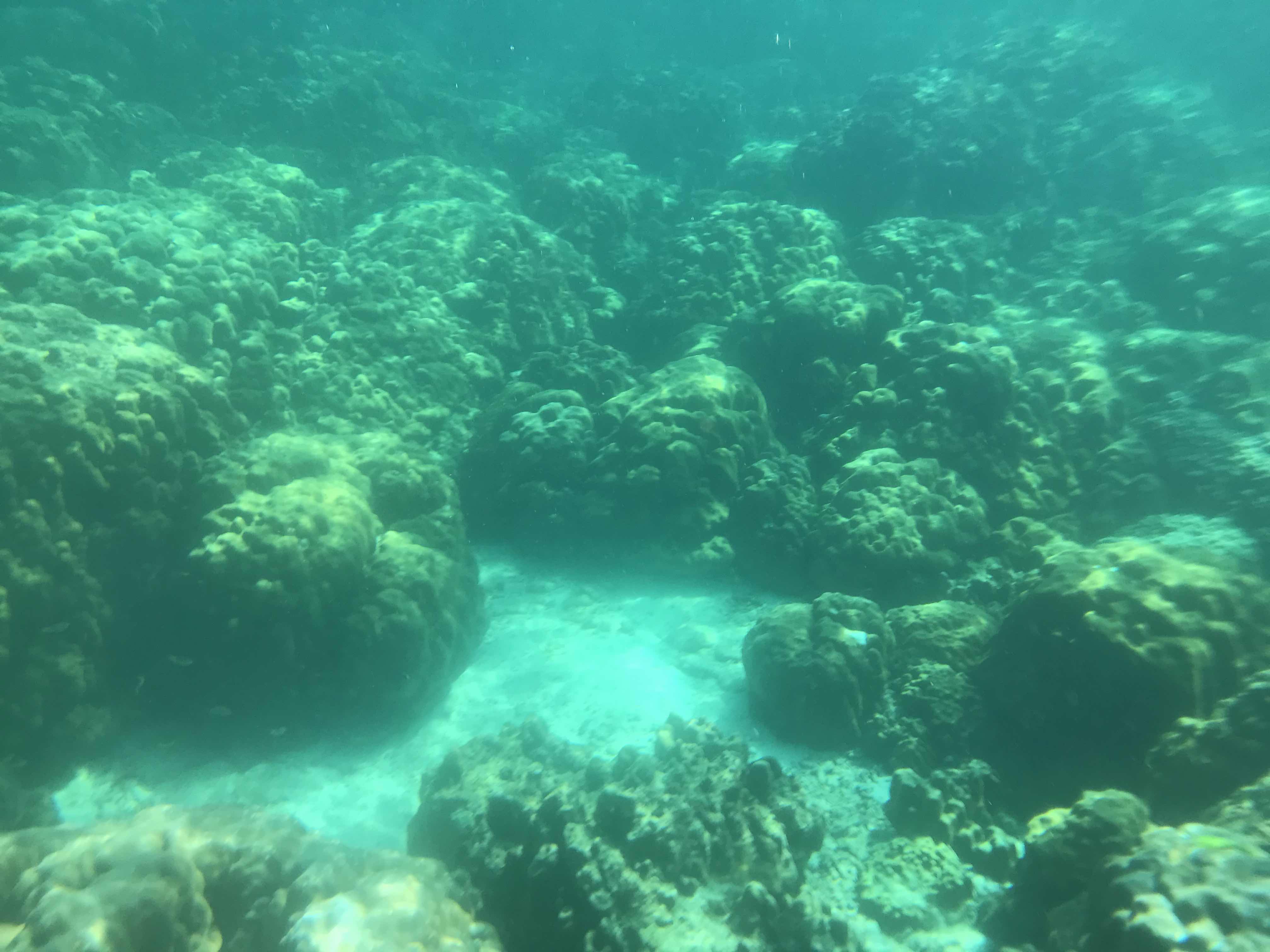 (It’s a pity that it doesn’t show in the picture, but all that coral is teeming with little fish coming in and out)

I swam back to the boat a bit early to make sure I could take pictures of the surface (I wasn’t sure I’d be able to salvage even one of the underwater ones), and soon afterwards we made our way back. This time it took around 40 minutes, even at full speed, and rather than ride to each hotel they dropped us all off at Long Beach (the main Ko Lanta beach, which I think is like 3 km long, hence the name) and then made us hopped onto the flatbed of a jeep to drive us to our respective accommodations. The back of the truck was seemingly made entirely of rusty bolts and pointy joints, such that the entire drive I could only envision a future full of tetanus shots, but in the end we made it to our destination safe and sound. 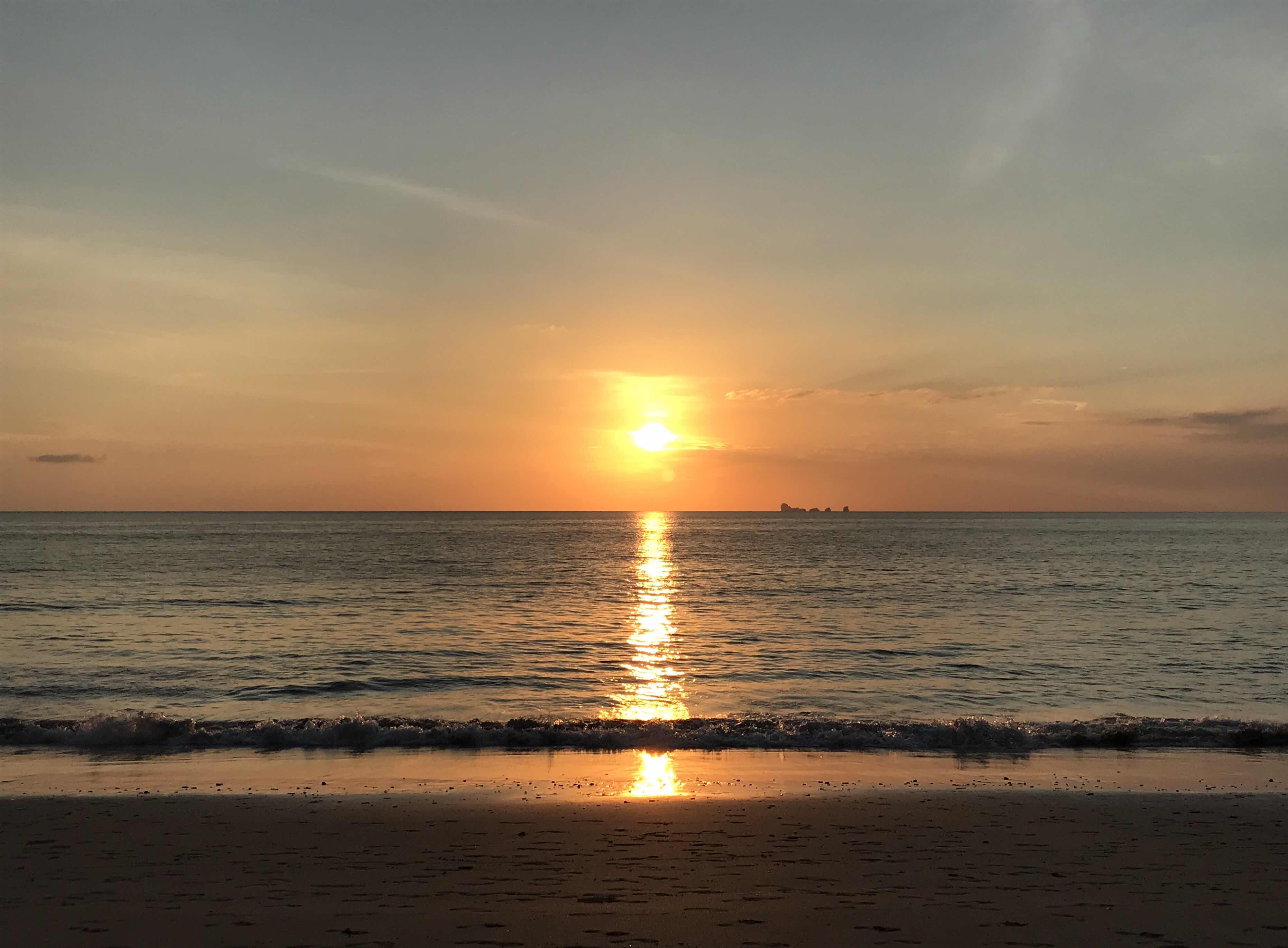 After a short rest, I walked up and down the beach while the sun set behind the sea. Tiny, nearly translucent crabs darted away from me at incredible speed, then stopped dead in their tracks, thinking they had successfully evaded me. From its golden color, the sun turned red the instant it seemed to touch the water, then disappeared, leaving the land in shadows. This is not the only astronomical phenomenon happening today, as it’s a full moon night now, with no clouds in the sky. It’s the Loy Krathong festival here in Ko Lanta, where they put floral arrangements in the water to placate the goddess of the sea; I don’t know if it’s a real holiday or just something for tourists to do, but they celebrated it at the hotel so I went to check it out -if nothing else, it was good barbecue, with cake as dessert. I miss baked goods sooo much!