It is on for the last leg of my Thailand trip! This is the “beach paradise” part. I am not a big fan of beaches (I grew up on a beach town so maybe the novelty just wore off) but I figured it was worth checking out the turquoise-water-white-sand experience at least once, and this seemed as good a chance as any. I’m telling people I’m going to relax, although if you know me you know that I don’t relax and that my secret plan is to tour around the neighboring islands.

When looking for Thai islands to visit, it’s difficult to choose from several dozen options, from all-night party islands to remote natural hideaways. Because I had so little time, I wanted one that was easily accessible, which shortened the list to the biggest and most popular ones (inevitably, well connected means frequented, and vice versa). Ko Phi Phi, the famous Beach, has a reputation for being drunken/trashy so I didn’t want to stay there even if I still want to visit Maya beach; Ko Samui looks great and I love that there’s a tropical island called Samui (Japanese for “cold”), but I read that it gets really rainy in November; in the end, I chose Ko Lanta, a large enough island close to the mainland served by Krabi airport.
So anyway, this morning I took a cab from my hotel to the airport, and for the first time got a driver who could communicate well enough in English and asked me about my trip. He seemed genuinely happy that I was enjoying myself, which I found endearing because that’s exactly how I react to foreigners in my town, too. He was especially thrilled that I was eating Thai food, which, dude, no need to twist my arm for that one! The pleasure is all mine! Shockingly, the ride to the airport was less than 15 min. My eyes briefly glazed over as I imagined what my life would be like back in Versailles if I could get to either one of the airports in just a quarter of an hour, but I quickly snapped out of it. Might as well ask for the moon!
After a two-hour flight, I got off more than a thousand kilometers further south, in Krabi. The airport seemed way smaller than I imagined it, considering that it is the only viable airport for a large number of very popular islands (the other being Phuket). I had already booked transport via my hotel, which was fairly expensive, but it’s a considerably drive and at the time I wasn’t sure if I’d have trouble figuring it out on my own. Today I noticed that there’s a van company’s desk right there on the arrivals area where you can board shuttles to different islands, so probably it wouldn’t be too difficult, but I was happy I didn’t have to worry abot it! So anyway, I got out onto the hall, and of the dozen or so people holding out signs, none of them had my name. Once again I told myself: it will look like they have forgotten about you… So I waited a few minutes, but finally called the hotel (it’s a 2.5 h drive, so if they had indeed forgotten about me, I wanted to know before the shuttles left), who told me that the driver was indeed there, just maybe at the wrong gate! I was like, we’re the only ones here… but lo and behold, there came a man with a sign bearing my name. Onwards!
On the long way there, it took me a while to realize what was different from the other rides I’ve had in Thailand, until I finally got it: we were driving fast! There are functioning highways here, properly paved, and so the car could reach 100 km/h, which felt vertiginous after all this time. After about an hour we reached a pier and boarded a ferry, a flatbed ship that cars simply rode onto. Ko Lanta is very close to the mainland, but it still requires a very short ferry ride. After we disembarked, I studied the landscape from the window. Ko Lanta is not at all what I expected: you see, it is (along with Phuket and Ko Phi Phi) among the most popular islands in Thailand, especially with European tourists (the French have an entire Survivor-esque show set here), and while the whole island caters to nothing but tourists, it also doesn’t feel very developed. There are lots of hotels and hostels, but bars and restaurants seemed few and very basic. Roads were badly paved or not at all, with no room on the sides for bikes or pedestrians. The locals seem to be majority Muslim, as most women and girls wore khimar. Only a few residential houses could be seen here and there. 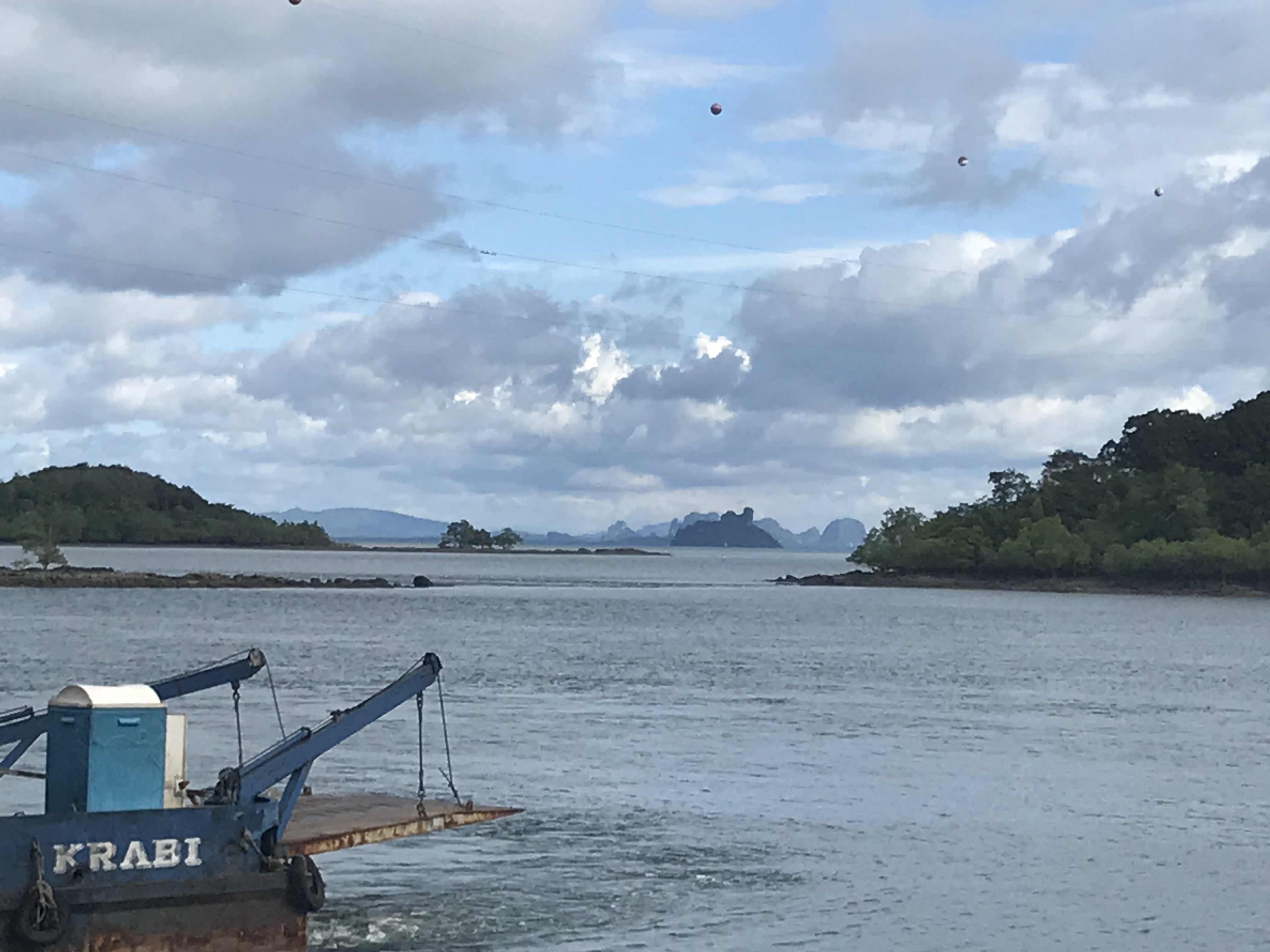 It dawned on me with a mild panic that I effectively have no way to move around this island, which runs 22 km north to south: Grab doesn’t work here, so I can’t call a cab, there is no room for bikes on the road and there are daunting slopes anyway, and walking is out of the question on account of the distances and how I don’t want to die. Apparently everyone here gets around on scooters, but I can’t drive one, and even if I did I’ve read that road accident rates in Thailand are astronomical so I wouldn’t want to risk it!
To make matters worse, my hotel is on the southernmost tip of the island, so it’s far from everything (insofar as there’s anything to be far from). Everyone always says how crowded these major islands are and how it’s tourist central that I did not expect to end up somewhere actually secluded! 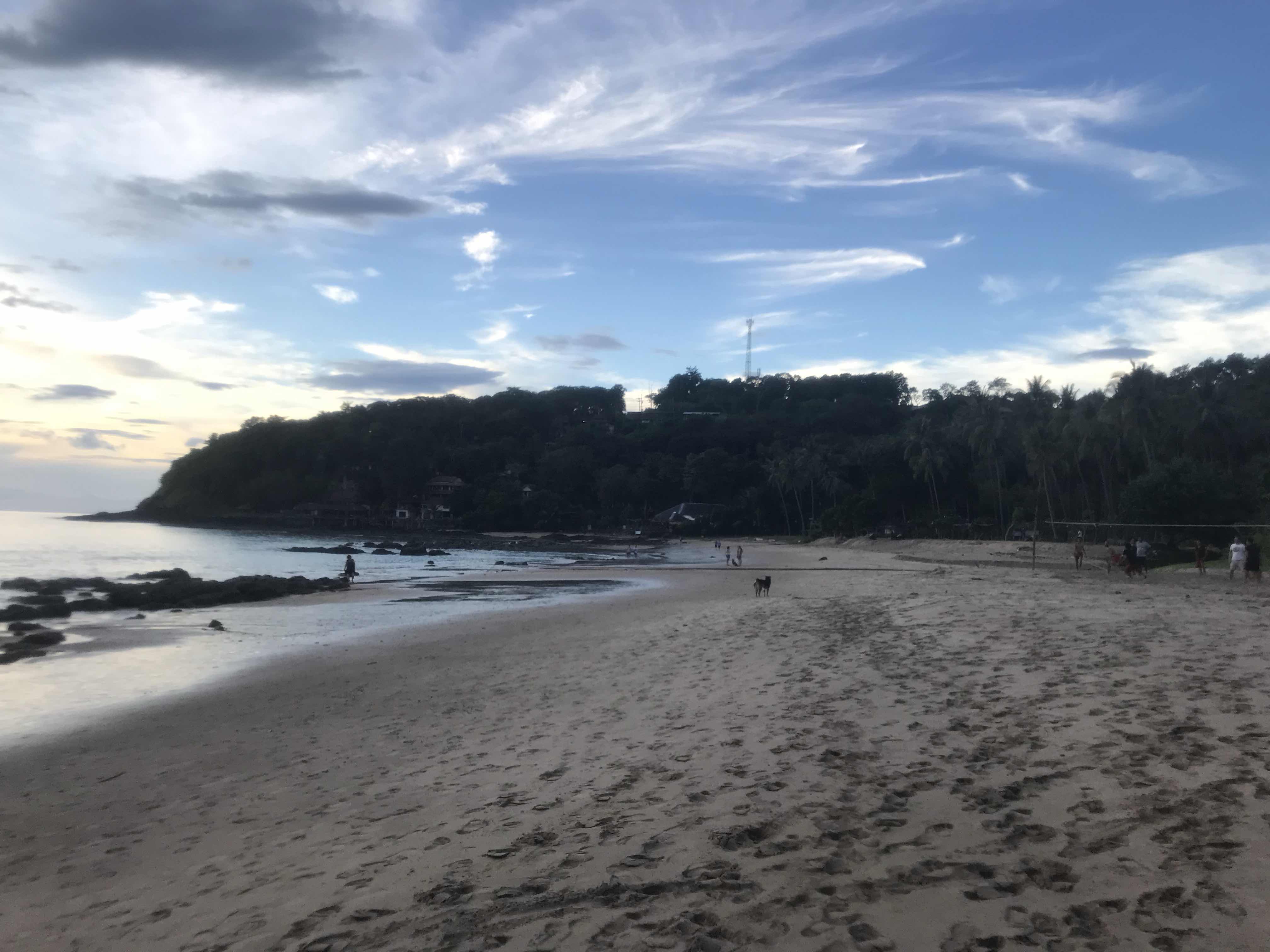 Eventually we did arrive at the hotel, LaLaanta, which is a bungalow-style beach resort. It’s completely inside the jungle, has two pools, a restaurant, and it’s also right on the beachfront of one of the island’s quietest beaches, shared only with one other hotel at the end of the bay. So the good news is that it is self-sufficient and I have enough here to sustain me, the question is just how to avoid bouncing off the walls after half a morning and end up talking to a football with a face on it. After dropping my things off at my room, I quickly went to reception and booked myself on tours of some of the islands in the area. That will occupy me for most of the day, and then I can chill out at the resort like a normal person. We have a plan!
With my future all settled, I explored the resort a bit while the sun set, and indeed it’s one of those places that looks like a movie set. Outside of some guys playing volleyball and a couple taking a swim, the bay was deserted. The shore I’ve seen so far seems rather rocky, with long rock formations jutting out of the sand; the water is oddly warm, having only known cold seas. I admit I wasn’t blown away by my dip into the ocean but what I loved was hearing the regular sound of waves crashing against the shores. Wherever I go, that sound takes me back home and fills me with peace. 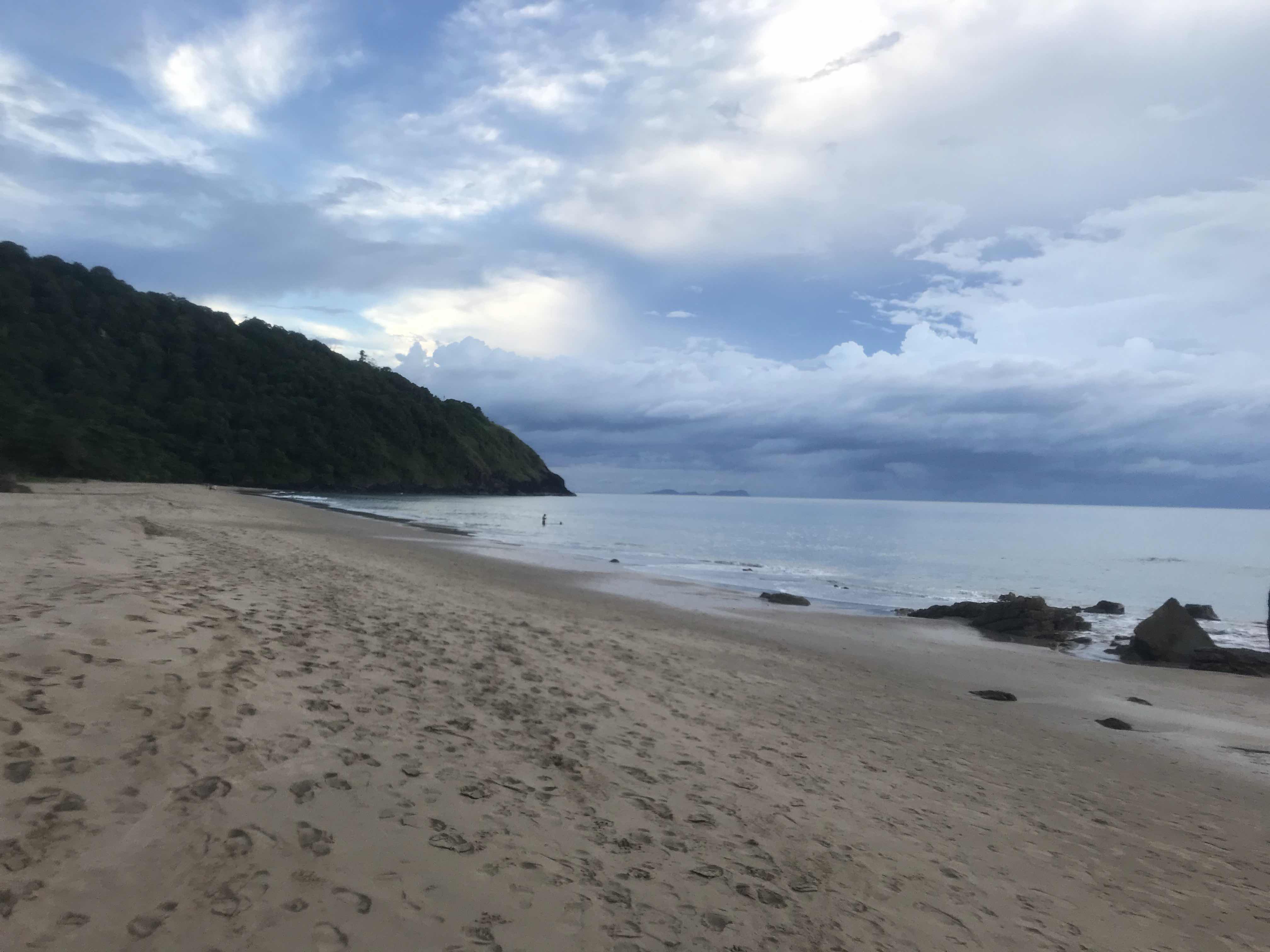 I checked out the DVD collection, was stunned to find a recent Basque film among all the American blockbusters, and then had dinner at the restaurant. The manager greeted me in a fashion similar to what I’ve got several times already throughout the trip: “You’re Spanish? But your English is so good?” I think our linguistic reputation leaves to be desired!
Tomorrow: island-hopping!