If you remember, I wasn’t sure whether I was up for a full hike, but I also wanted to get out of the city a bit, so I booked myself a tour of Doi Inthanon National Park. The van was supposed to pick me up “between 8:00 and 8:30”, so of course I was waiting for it in the lobby at eight o’clock, and by nine o’clock nobody had appeared. I remembered a piece of advice I was given about pickup arrangements in Southeast Asia: “It will always feel like they have forgotten about you, but they’ll always appear”. Altogether good advice, it is tempered by the fact that one time in Vietnam they did really forget about me and left me as the only foreigner in the Lao Cai train station at 5AM, but I digress.

Sure enough, five minutes after nine the tour guide walked into the lobby and waved me over. On my group there were three other Spaniards (we’re taking over!) and a Malaysian family of seven. I was shocked to find that the drive to the national park would take nearly two full hours; the distances in this country are immense!
After a long morning drive, our first stop was to see the Sirithan waterfall, a beautiful 40 m waterfall nestled between densely forested hills. Interestingly, the forest here looked closer to the pine tree forests you’d see anywhere in Europe than to the jungle I’ve seen elsewhere in Thailand. 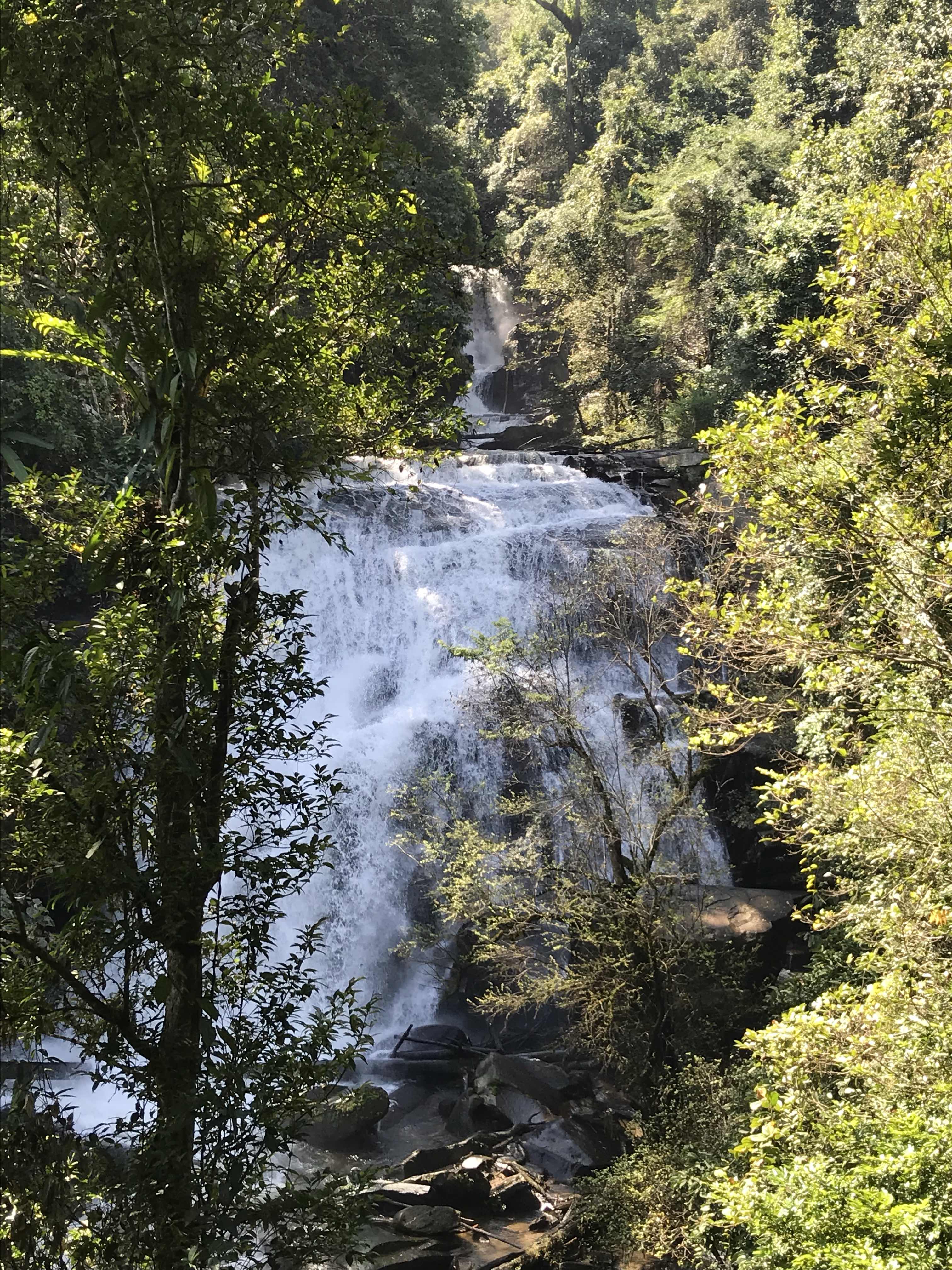 Next we drove a little farther to see Wachirathan, the park’s other big waterfall. If Sirithan was beautiful, Wachirathan is stunning: it is twice the size, and features several currents and drops over a rocky cliffside. I needed a minute just to stand there and take it all in, as the waterfall roared loudly ahead and sprayed us with intermittent waves of mist. 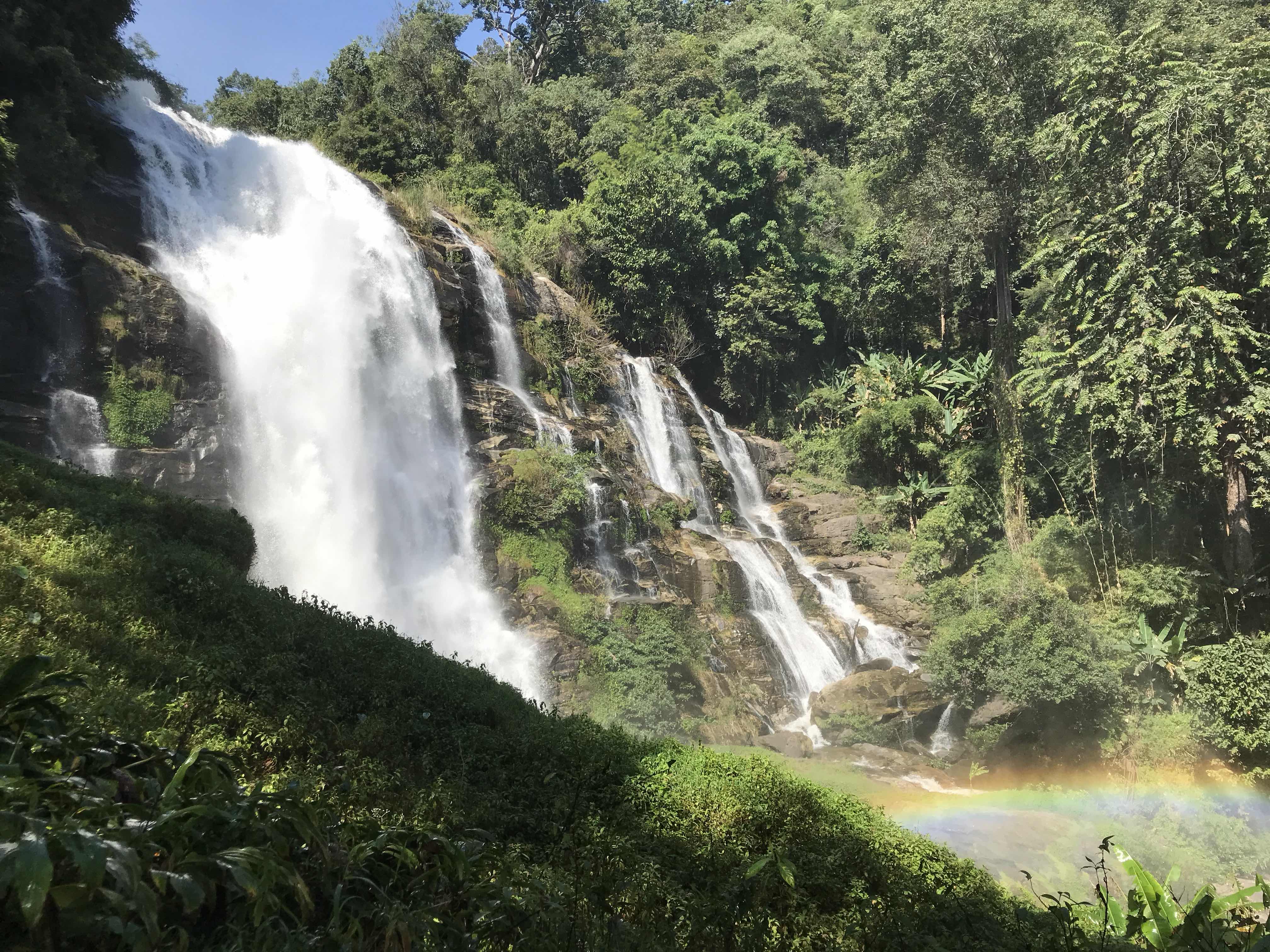 This was the closest thing I got to a hike today, because here we had a little bit of free time and there’s a winding path from the viewpoint at the base of the waterfall that snakes all the wayto the top, with a few landings along the way that provide new perspectives. When I reached the top, panting and sweating, I could see the riverbed right before it jumped down below. Then I had to make my way back down! 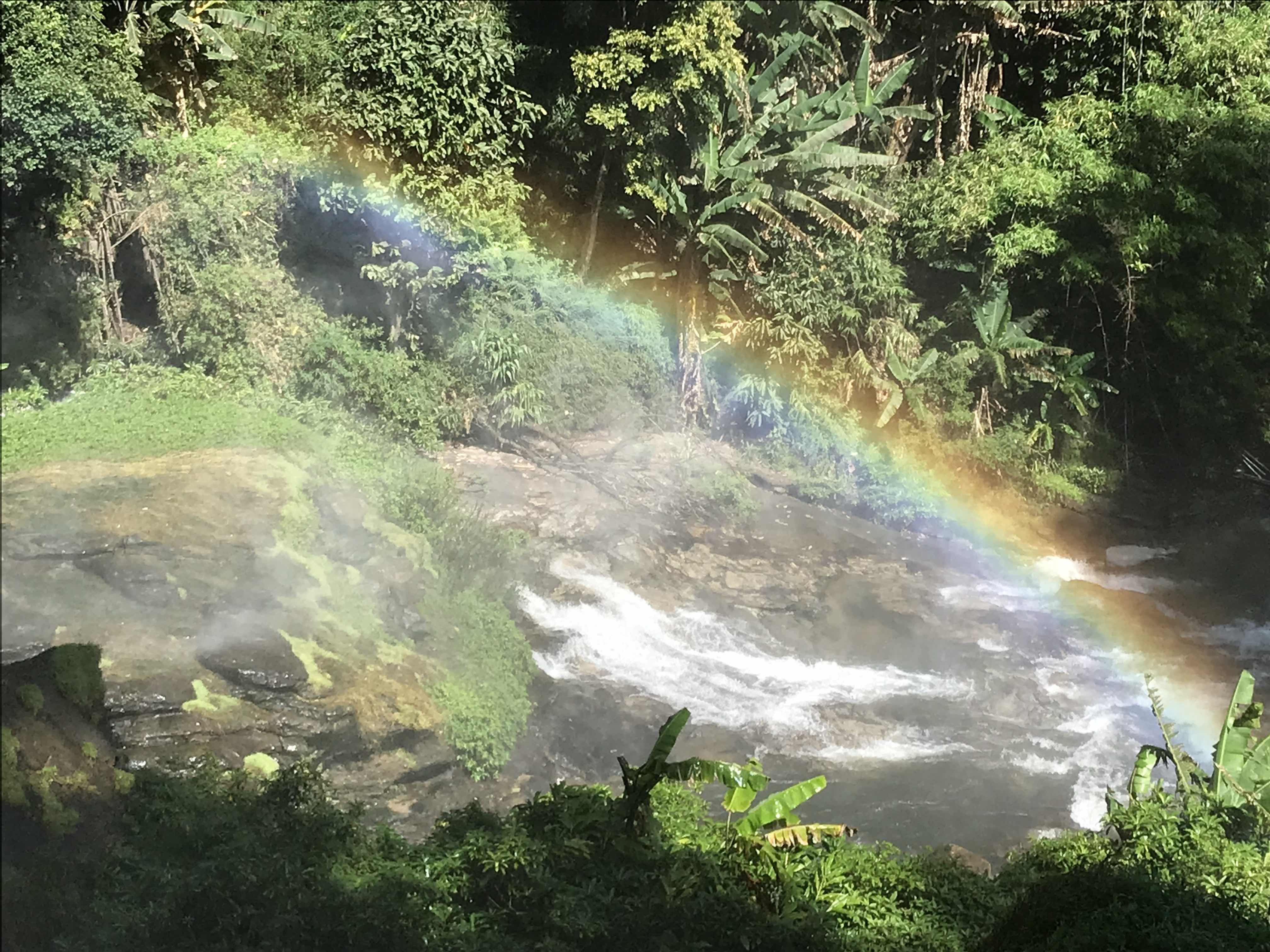 Due to the long drive, it was noon by now, so we stopped to have lunch at a restaurant right there at the base of the waterfall. The food was mostly unremarkable; there was a spicy chicken that was all right, but also this thing they call “clear soup” over here, which is a fancy name for… just water, but with vegetables in it.
We were barely finished when the guide herded us back into the car to drive up the mountain -all the way up, in fact, to Thailand’s tallest point, at 2,500 m above sea level. By comparison to other places covered in this blog, this is just about as high as Mexico City, and way higher than Sapa in Vietnam. Getting off the car here was an unexpected shock, because it was… cool?! We were so high up that for the first time since I landed on this trip I was outside but not hot; it was a breezy 20°C, which in Versailles would make for a fine summer morning but which here, to me, seemed now positively cold. There wasn’t much to see, though, apart from a giant sign telling you you’re on the highest point of Thailand (the path keeps going up after this sign, so… debatable) and a 100-year-old shrine where a royal ancestor is apparently buried. 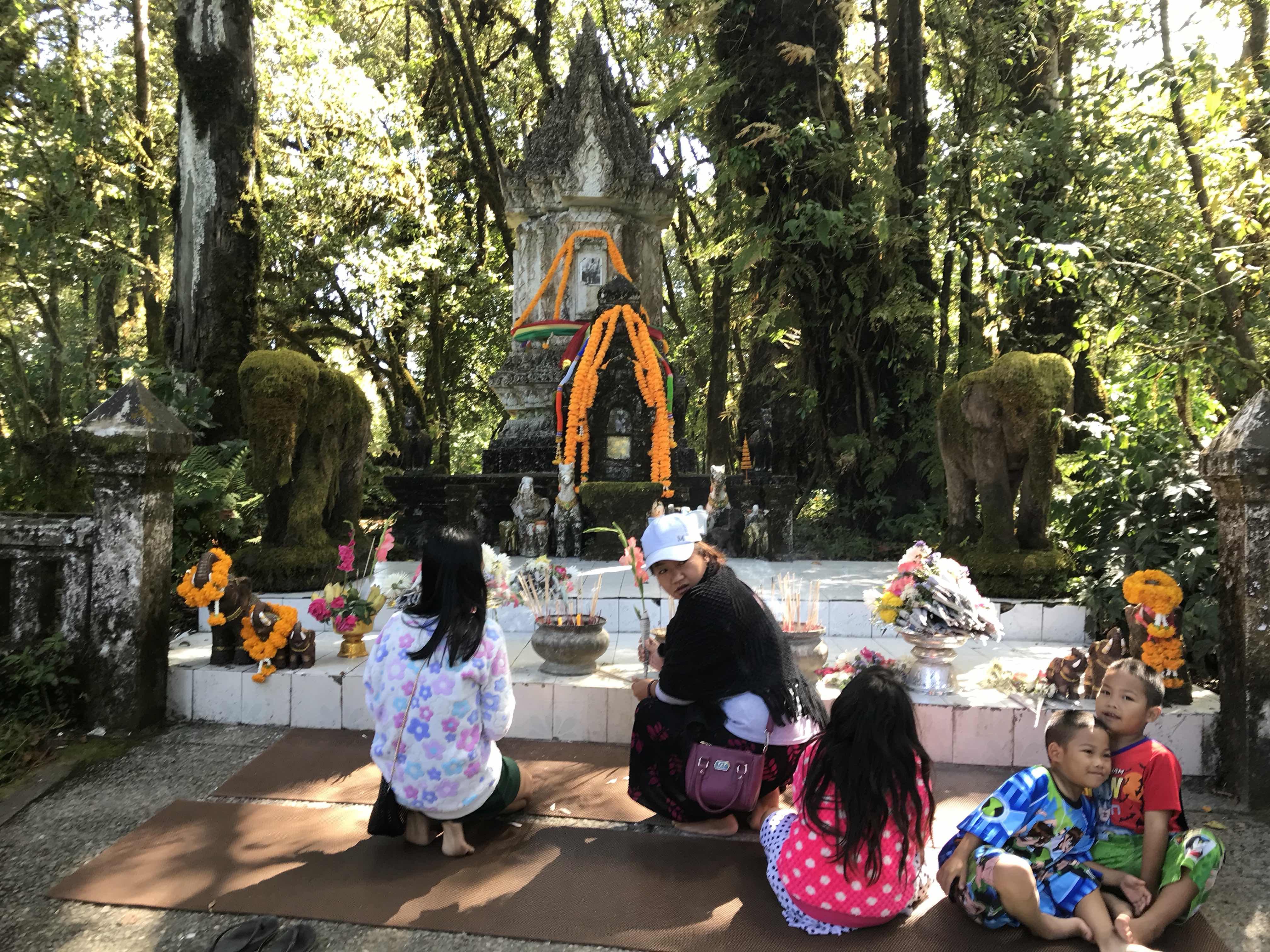 (On the way, by the by, we stopped at what was supposedly a visit to a Karen village where they grow their own coffee -the Karen being, like the Hmong, one of the ethnic minorities that live in Northern Thailand. This was a bust, as we were just ushered onto a gazebo and given to try their coffee, which tasted like burnt rubber, so… like all coffee, I guess? And that was it)
Next, we were dropped off at the two pagodas: turns out on top of the mountain there’s a King’s Pagoda, and a Queen’s Pagoda, both of them housing effigies of Buddha and sacred relics. They were built in the 80s and 90s, so they look a bit incongruously modern amidst their green scenery, but I guess it could be way worse and the design is timeless enough that it’s not really an eyesore. 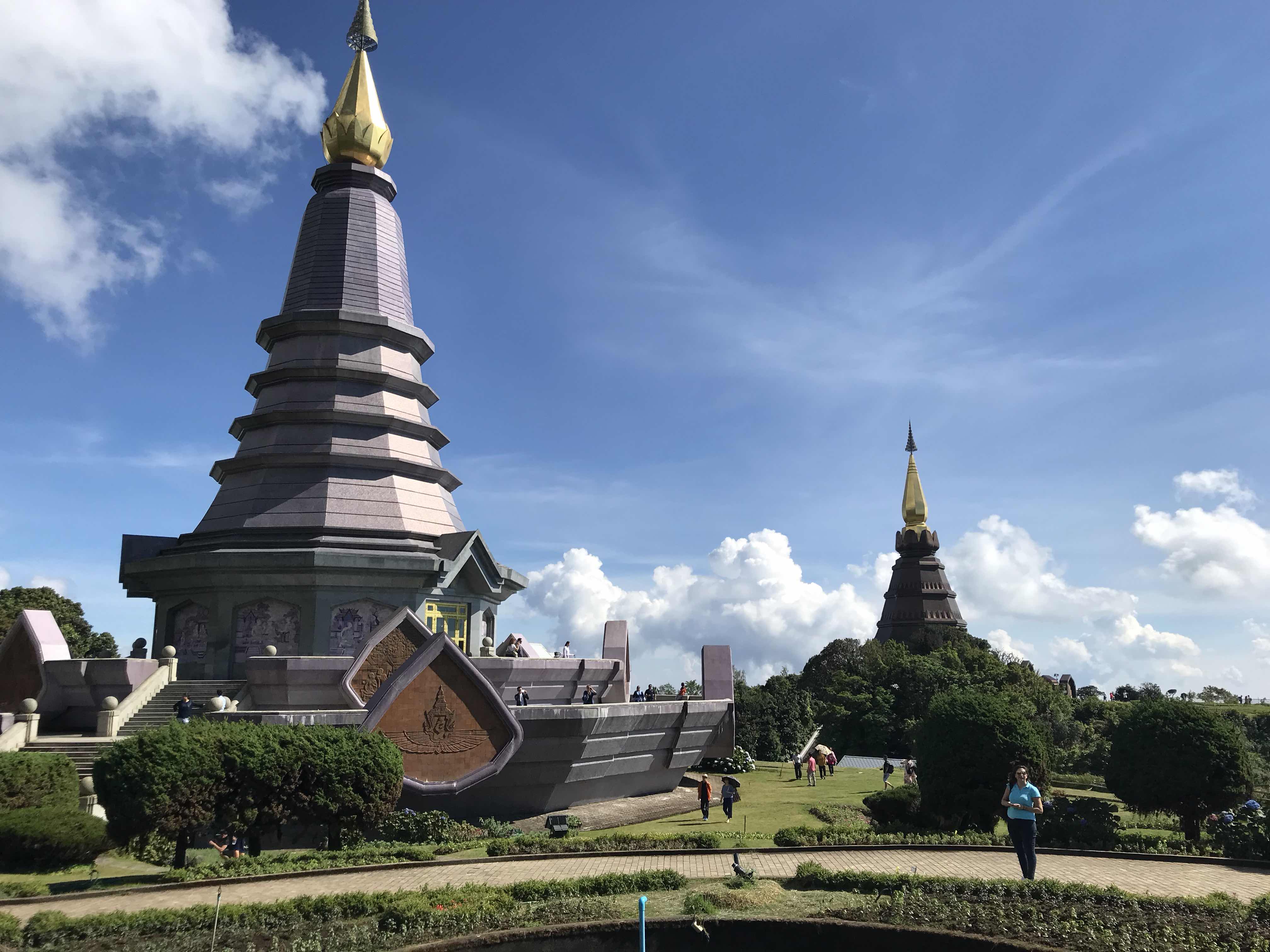 The grounds around the pagodas are well looked after, too, with small but well arranged gardens to stroll along and multiple balconies and verandas to take a good look at the expanse of valleys and hills spread out before us. 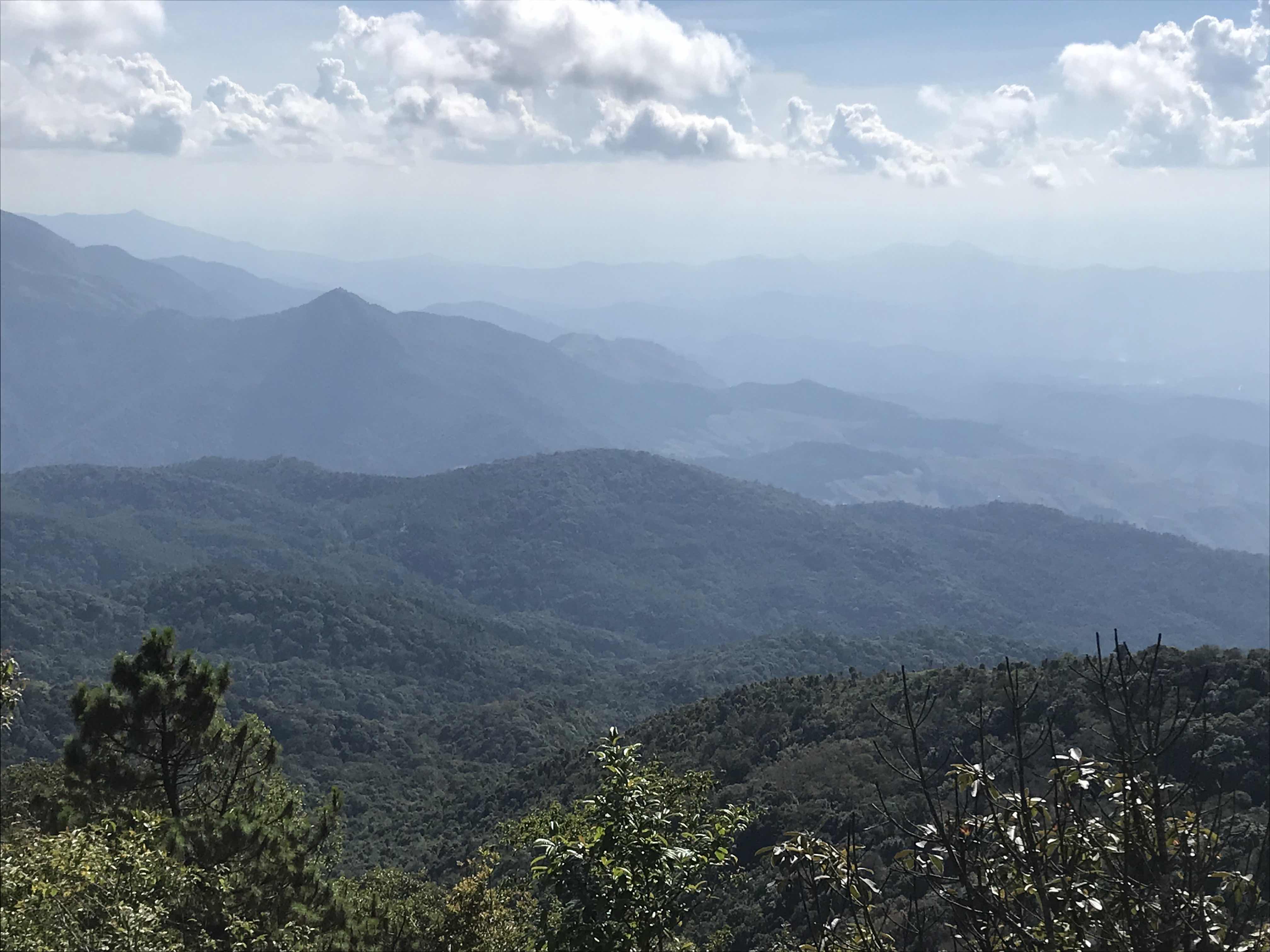 I thought this would be the final sight of our tour, but we had one more stop ahead: the enigmatically named “Royal Project”, which sounds like a research facility breeding a Thai Wolverine but is in fact the headquarters of a royal non-profit. I was pleasantly surprised to find that this place had strolling and botanical gardens, all laid out in a beautiful, manicured spread over rolling hills and valleys. It’s not an enormous place but there are lots of meandering paths that go up and down the hill and around small ponds with black and white swans in them (black swans and also white swans, I mean, they haven’t created zebra swans or anything). 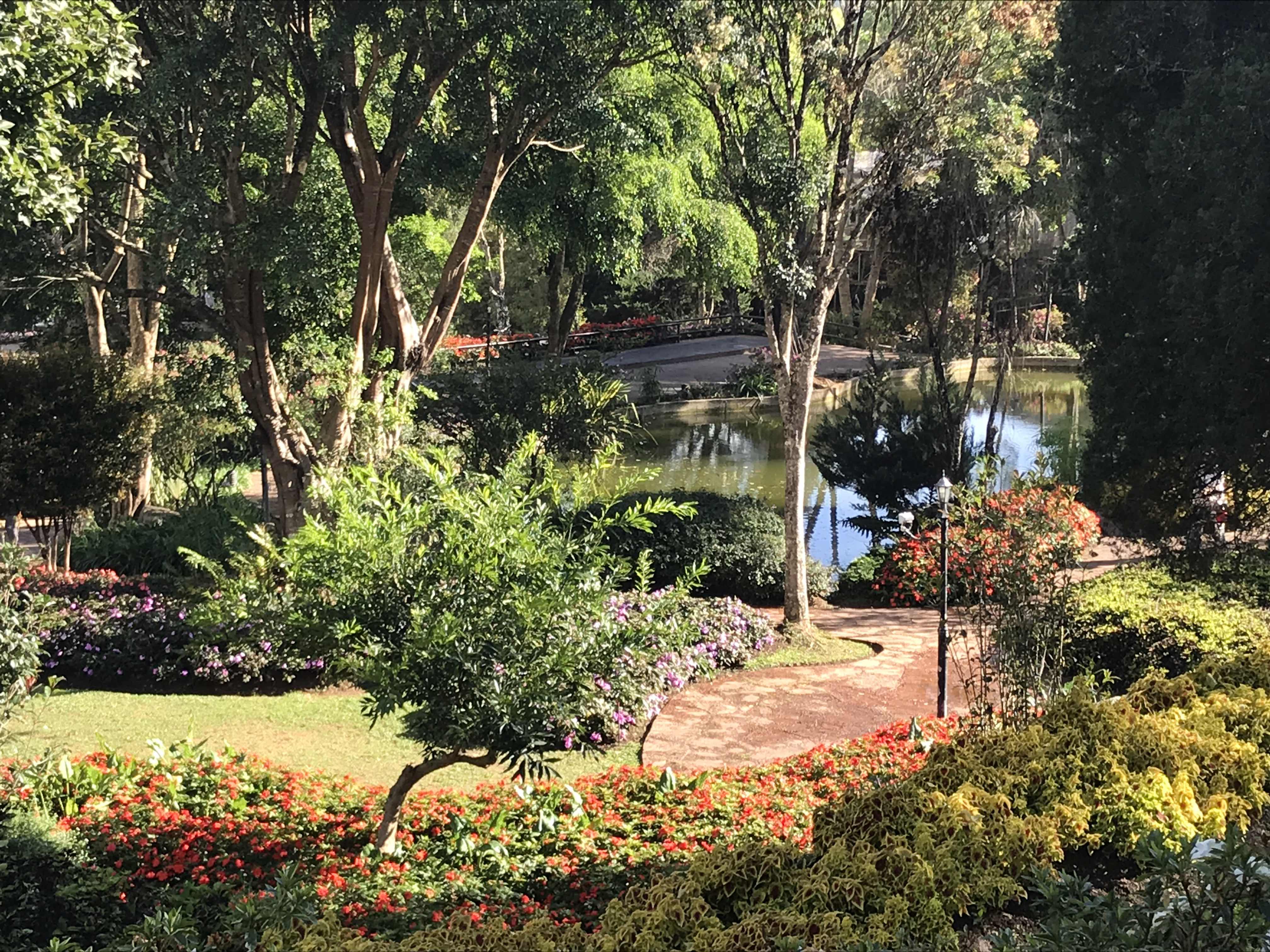 I took a walk around the strolling garden, appreciating the little stream and waterfall, and it was almost time to leave when I discovered a big greenhouse with a large collection of decorative plants, including several different types of orchids all growing naturally around trees; other flowers hung from flowerpots, spilling vines down onto the floor. 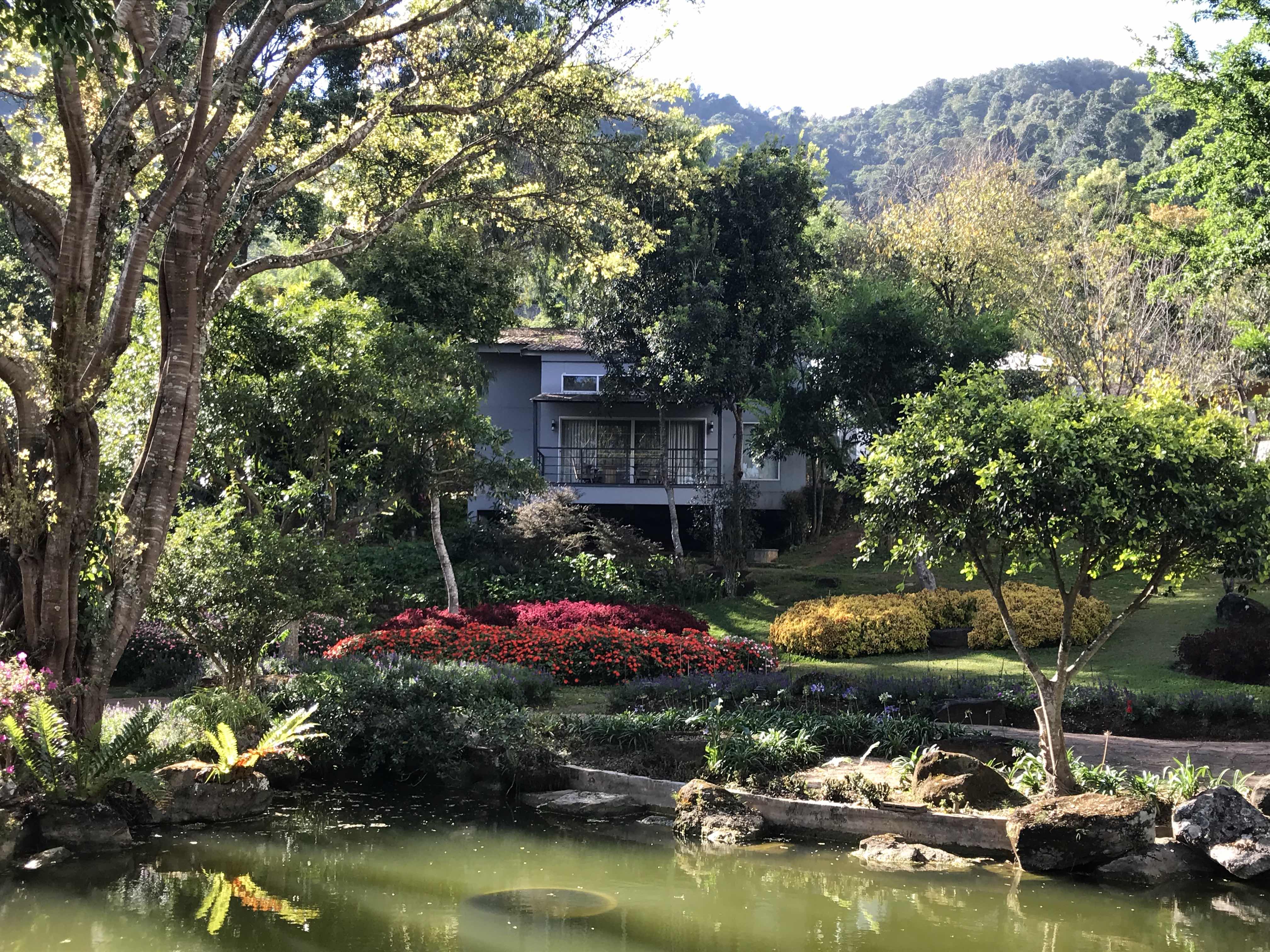 That was officially the end of the tour, still with a two-hour drive ahead of us before getting back to Chiang Mai. All in all it was a bit of a disappointment; the waterfalls and the gardens were all beautiful, so it’s certainly not for lack of remarkable sites to visit, but I expected to walk around a little more even if not a full-blown trek. We spent all day being driven everywhere, then let out for 15-30 minutes at a time to look at things from a distance, then shuttled elsewhere again. If you get to do it, reserve your strengths and go for an actual hike somewhere in the natural park!
Tomorrow I will be travelling all day (flying from here to Krabi, and from there it’s a 2.5 h drive to Ko Lanta), so it will be one more opportunity to regain my energy for the last leg of the trip. I just learned that tomorrow is the lantern festival in Chiang Mai, such a pity that I’m going to miss it by just one day. I also read that it’s raining in Ko Lanta, which would put a damper on my plans, but it’s also snowing back in Versailles so I won’t complain too loudly!