The bus ticket cost me 160 baht (€4), which is not bad for a 200 km journey! It felt really long, though: it got fully dark outside by 18:00, and we would only arrive at the bus station in Chiang Mai at 20:00.
Since I didn’t get to do anthing yesterday, this morning I walked out of my hotel (the Golden Bell) and crossed a street to reach Chiang Mai’s Chiang Mai Gate. You see, Chiang Mai’s old city lives inside a near-perfect square delineated by ancient city walls and a moat. A lot of hotels and other lodgings are outside of the old city, so you’ll have to find the nearest gate to cross the moat and get into the city proper.
The contrast with Chiang Rai was evident the minute I walked through the gate. Chiang Mai is way larger, busier, more developed, and more visited: the old city is teeming with tourists from all around the world as well as Thai people who come visit the temples. There are lots of cute cafés and walk-in stores that are laser-targeted to Western tourists, me included -I am more than happy to browse inside air-conditioned spaces! 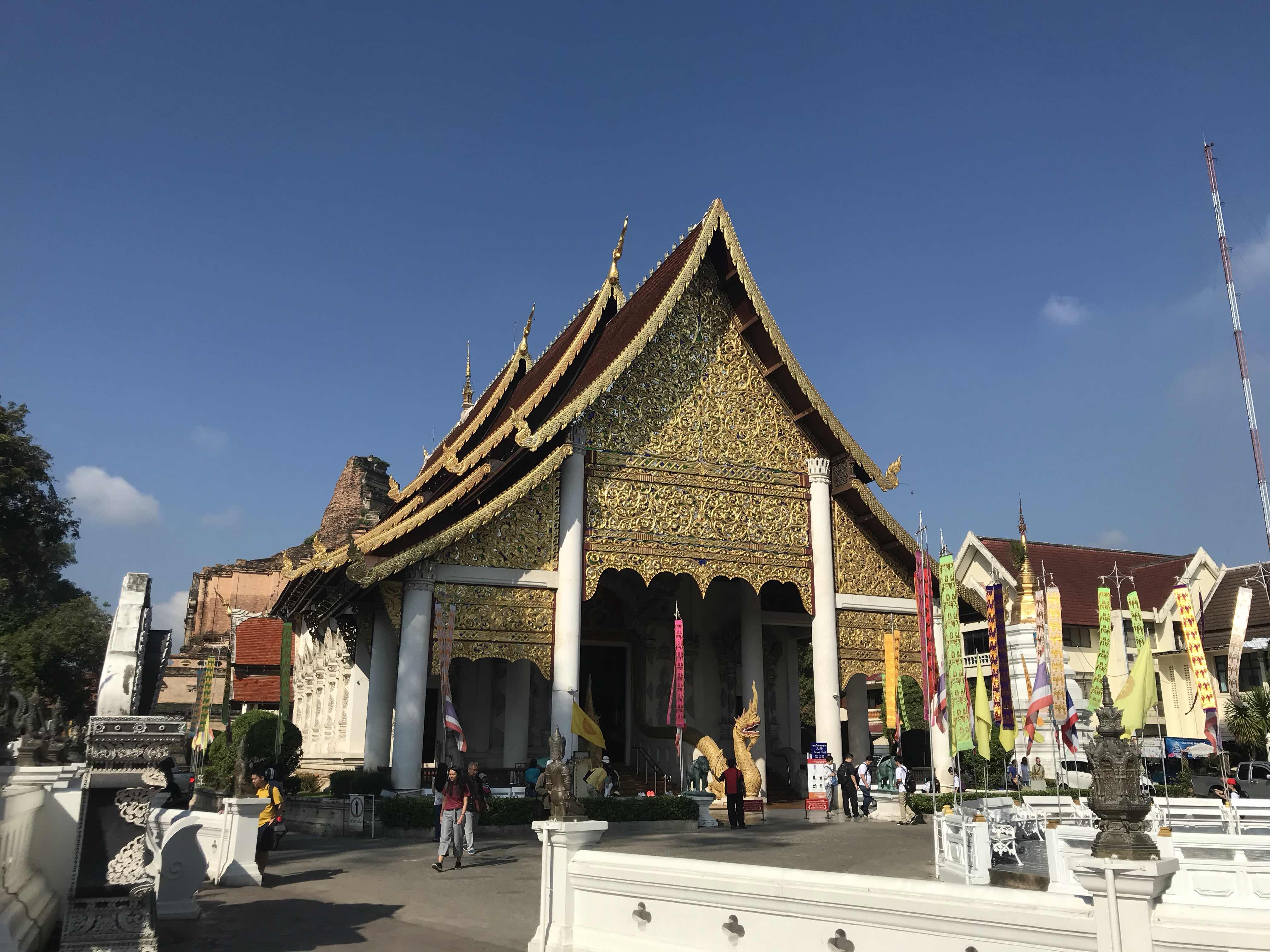 Having filled my checklist with the main temples and some interesting shops mentioned in my guide, I started working through it from the south, as I naturally ran into each one. The first one on my path was Wat Chedi Luang, a 15th century (!) temple compound. It has been rebuilt and restored over the centuries, but it still hosts the ruins of an enormous stupa, with naga staircases, Buddha effigies and elephant statues. 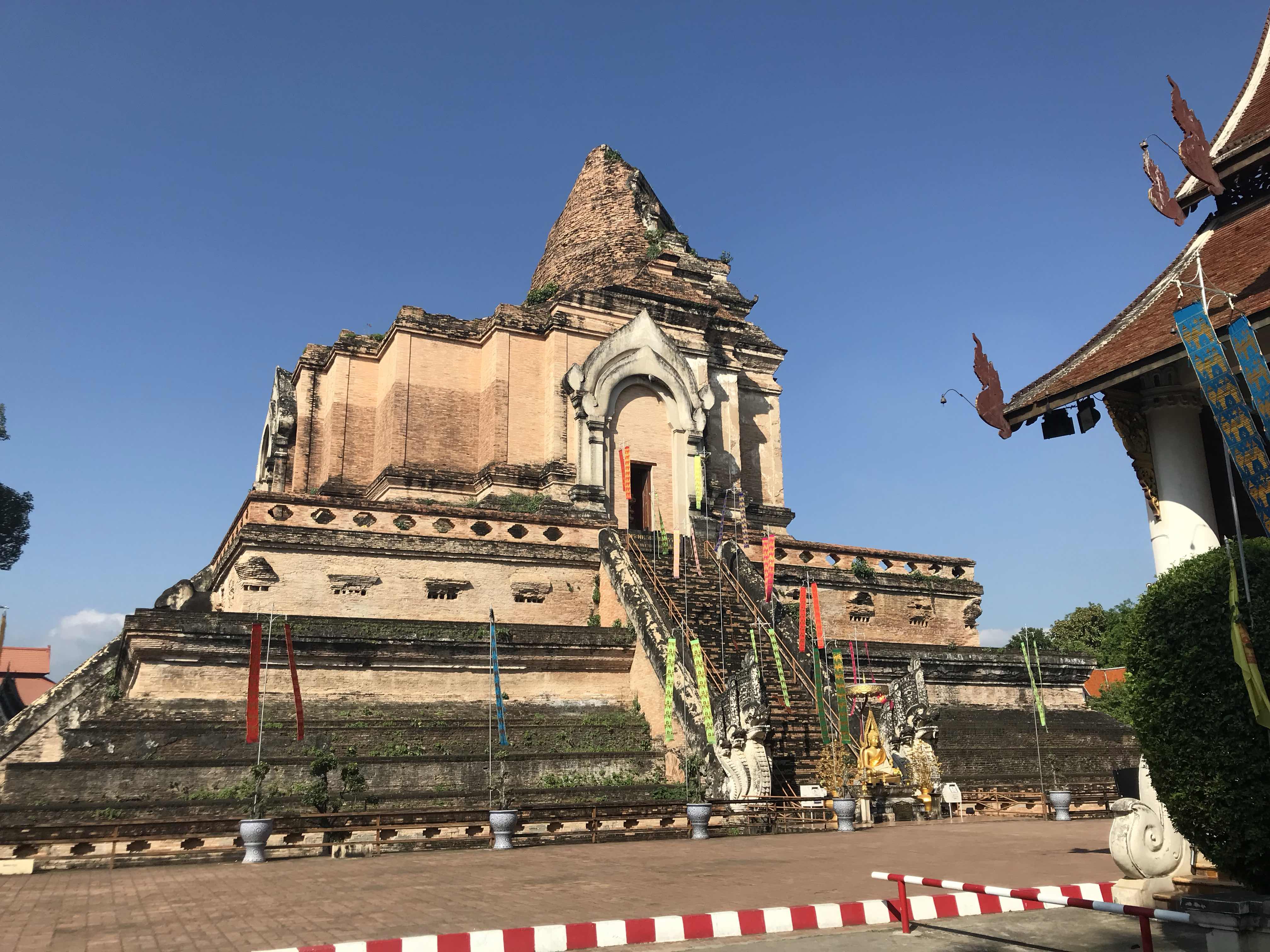 There’s also a small but very ornate shrine to Chiang Mai’s so-called “city pillar”, and, finally, the main temple, with a golden statue of a standing Buddha and his disciples. 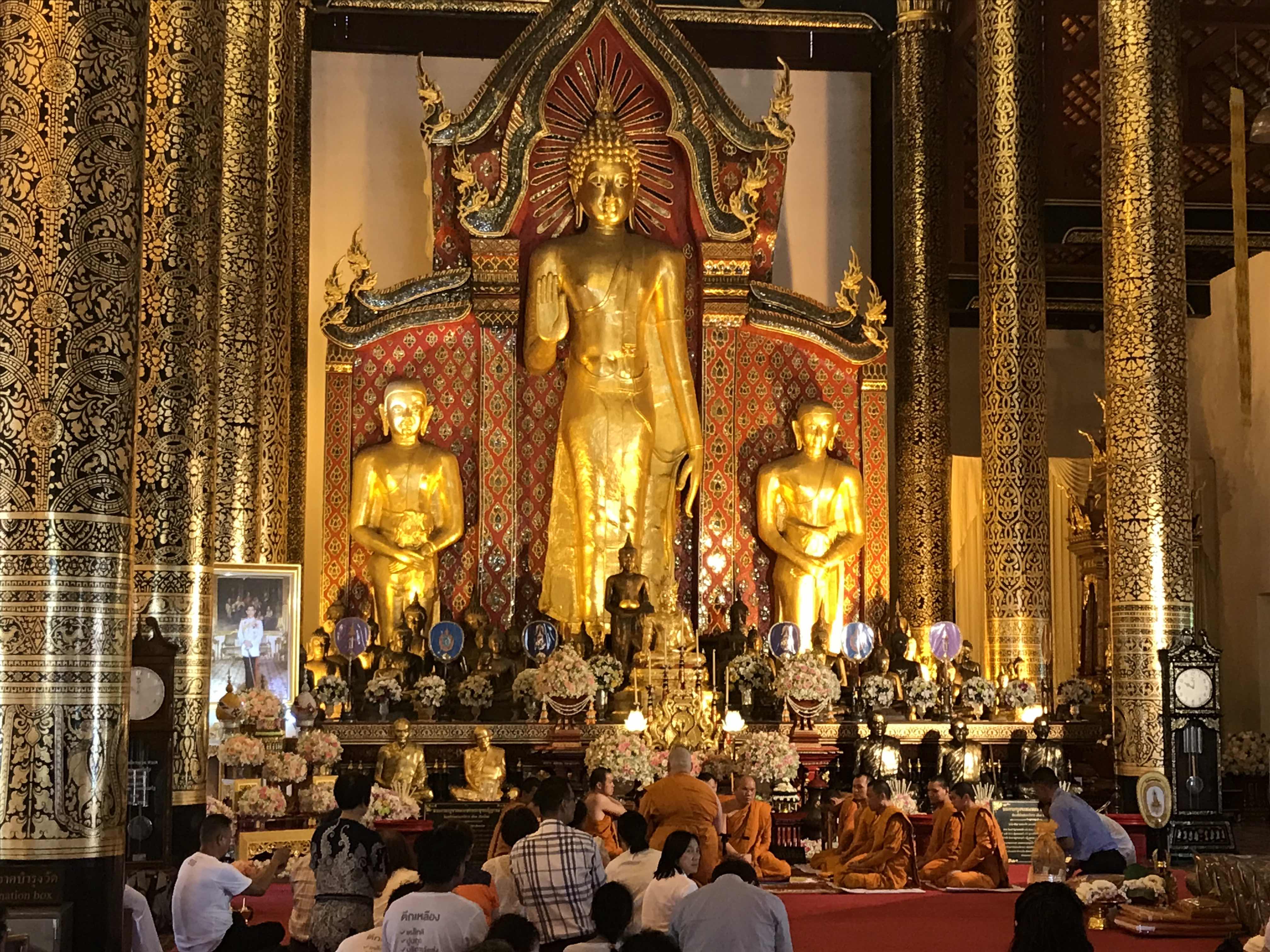 Right next door is Wat Phan Tao, which is free (Wat Chedi Luang was 40 THB or €1). This isn’t as much of a compound, but the main temple is large and made of teak wood, with the characteristic flames on the corners if the eaves. The inside also holds a golden Buddha, in an airy hall sustained by multiple columns. 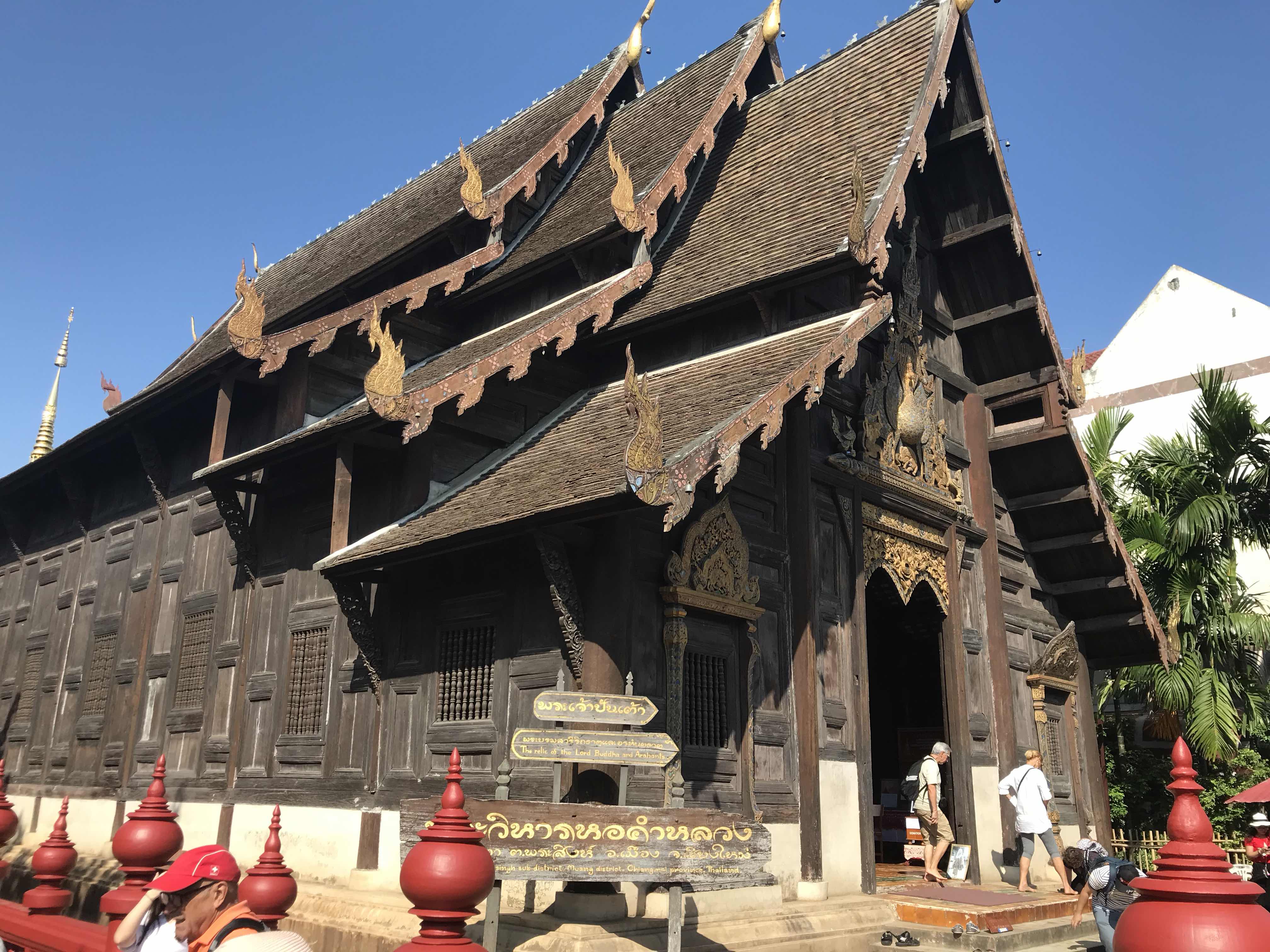 Under an increasingly oppressive sun, I took a bit of a walk west, passing more travel agencies, tiny restaurants and surprisingly enough a few very chic and modern luxury hotels, too. Central Chiang Mai sees quite a bit if motorized traffic in some avenues, and a lot of it is large cars so it makes Southeast Asia Street Crossing all the more challenging; there are some avenues that are so congested that they’ve had to install -gasp!- pedestrian crossings with their own button-activated streetlights! (Most button-activated streetlights are placebo, by the way. You can look it up!)
My walk took me to Wat Phra Singh, Chiang Mai’s most famous temple. Its grounds are quite big, with multiple ancillary buildings all around an impressive central shrine. 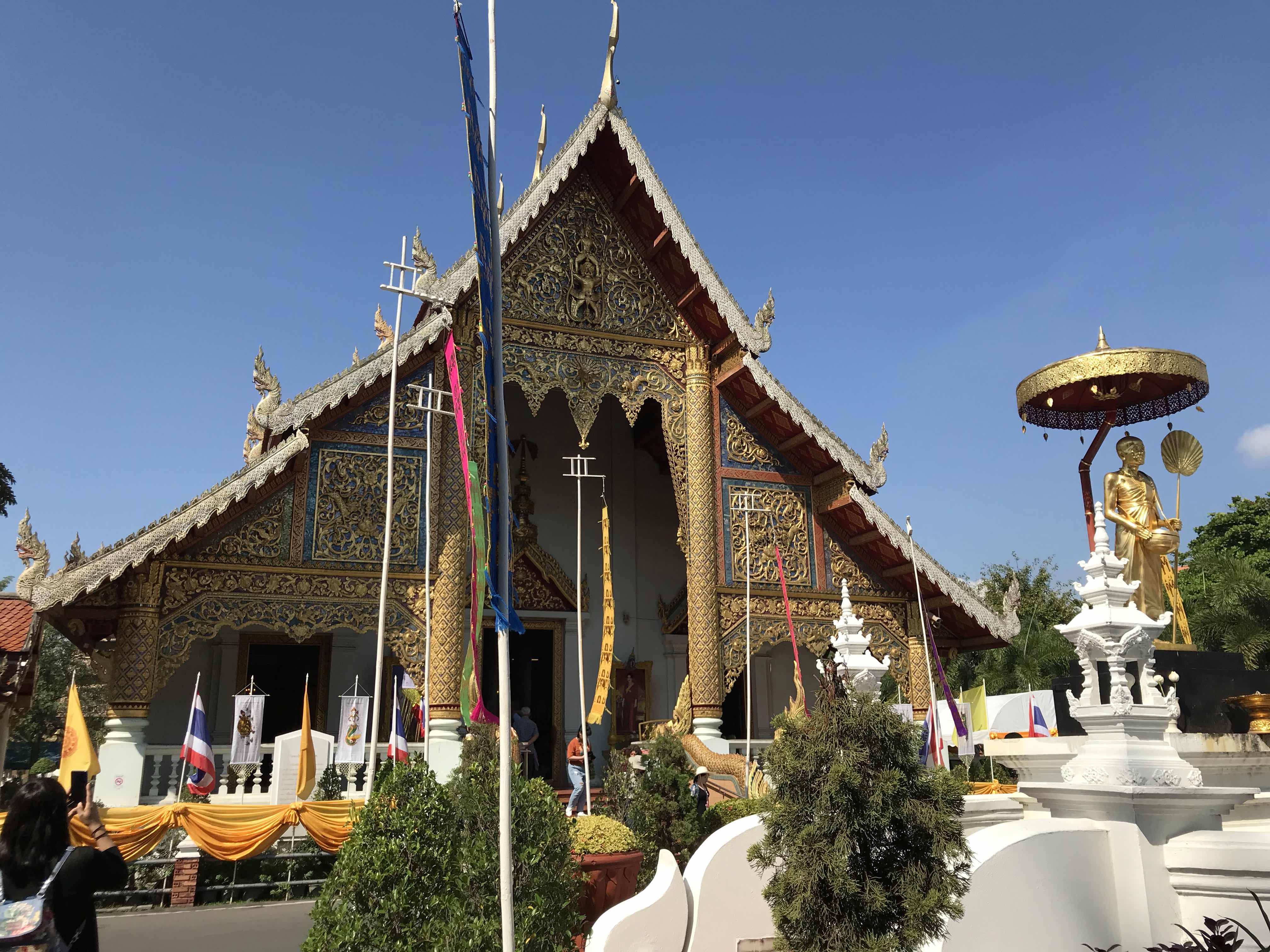 I walked into the large open space of the temple, presided by an enormous golden Buddha, and I sat down on the floor for a spell to rest my feet a little bit. I had barely taken off my backpack when a line of teenage monks entered the temple, they sat down on the wooden benches reserved for them on the side, and then two older monks walked up to the front of the temple and initiated a prayer service. It was 11:00, and for the next thirty minutes, the older monk would recite a long mantra, and all the novices would join in, not quite call and response, but more like a canon. I was lost in thought, transported by the monks’ droning, and when I next looked around me I saw that the temple had slowly filled up with followers (Thai and foreigners alike) who had come to join the service. Some of them had bought offerings, others had printouts to recite along, and others still dropped coins in a row of bowls on one side. A lot of them came in, prayed along for a while, and then left. When I grew more sore than tired I got up, too, and coincidentally that’s when the service ended and the monks all left as quickly and quietly as they had arrived. 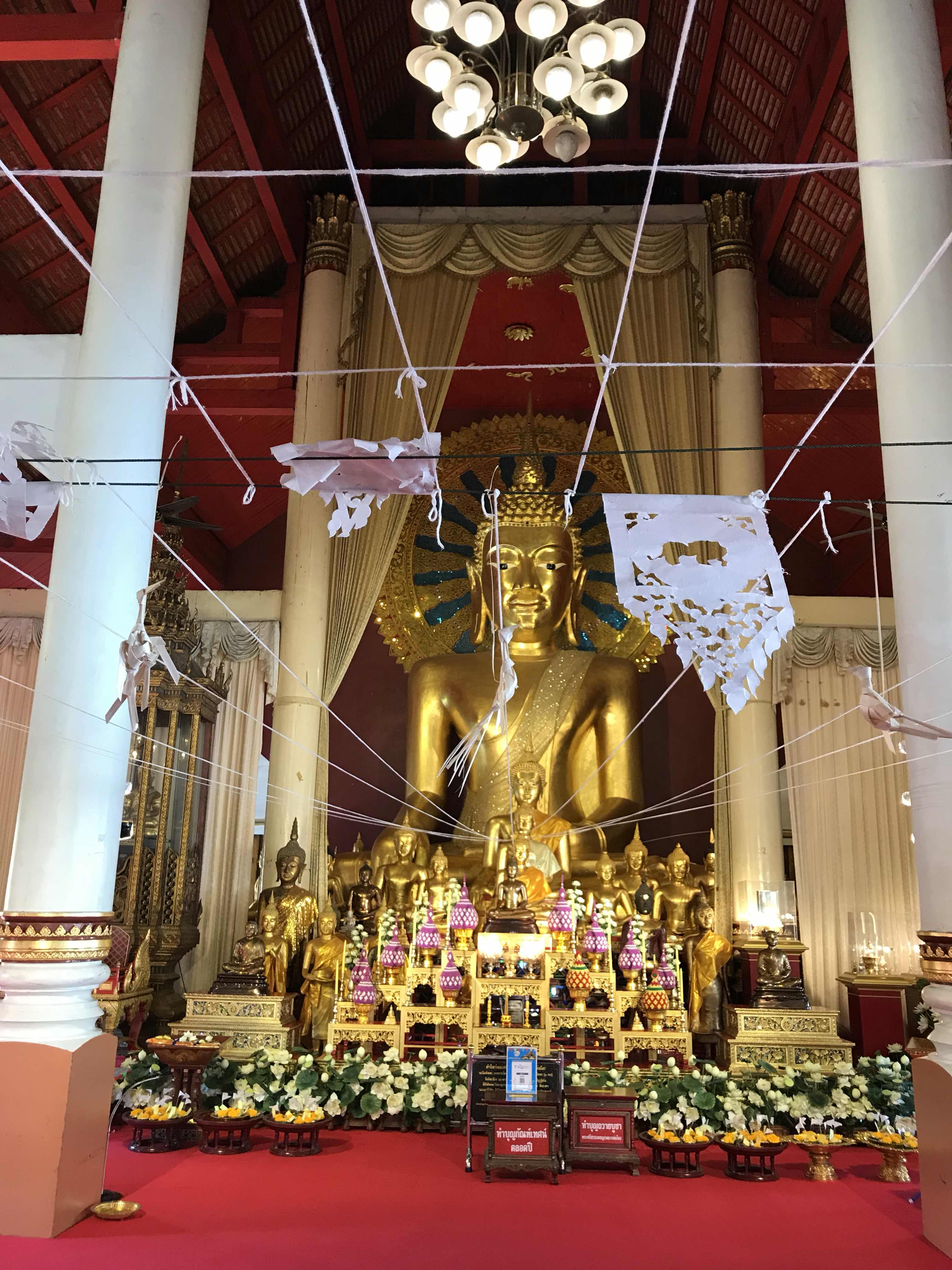 I peeked inside some of the smaller shrines, although it was difficult to tell where the temple grounds ended and where the rest of the city began: on one of the sides there’s an entire school with its courtyard open to the temple’s side! There’s also a very large golden stupa that looked brand new, even though most of the structures and statues in the temple are well over 500 years old.
After the visit I’d thought about peeking into the Lanna Folklife Museum, which is towards the center of the old city, in a block that has large, modern official buildings that stand out a little bit from the rest of old Chiang Mai; unfortunately, it closes on Mondays, so I’m gonna have go read up on the Lanna on my own.
Walking back towards my hotel, I stopped at a tiny place called Freshtime for lunch, and had a fantastic tofu pad thai and a mango and passion fruit shake. Here, by the way, all fruit-based drinks are called shakes: I’ve been ordering shakes all over Thailand and sometimes it’s a juice, sometimes it’s juice and crushed ice, and sometimes it has milk. They’re generally always good though! Pro-tip: if you’re just having lunch, straight up juice is the best, so as not to dilute the flavor, but if you’re getting one as a refreshment while you’re out and about, crushed ice is heavenly!
Even after lunch I was spent, so I walked the very short distance to my hotel to rest. I also looked online for a tour that I could join tomorrow. I was hesitant about going on a hike because, 11 days in, I’m already in that phase of the trip where I’m tired all the time. Having so many bus and plane rides helps break it up, but I still get fatigued very quickly. In the end I found an offer (they seem to say “join tours” for those that aren’t private and accept walk-ins) that is less of a hike and more of a tour of a nearby natural park, so that should keep me entertained without being the end of me!
I eventually emerged from my cave, just as the sun was starting to set, to take a look at the city at night. The heat remains the same here at all hours, but at least at night the sun doesn’t burn so it’s nicer to walk around. It was a very interesting experience: whereas during the day everybody outside was either a tourist or a pilgrim, at night different urban tribes came out of hiding: lots of Spaniards, a sixty-something white man getting an ill-advised back tattoo (I mean, I didn’t see what the tattoo was, but I know it was ill-advised), a young Indian backpacker who was trying to bargain for a tuk-tuk ride and was being quoted 400 THB for a trip that I’m sure should cost 90, teenagers in short robes helping out in some temples… 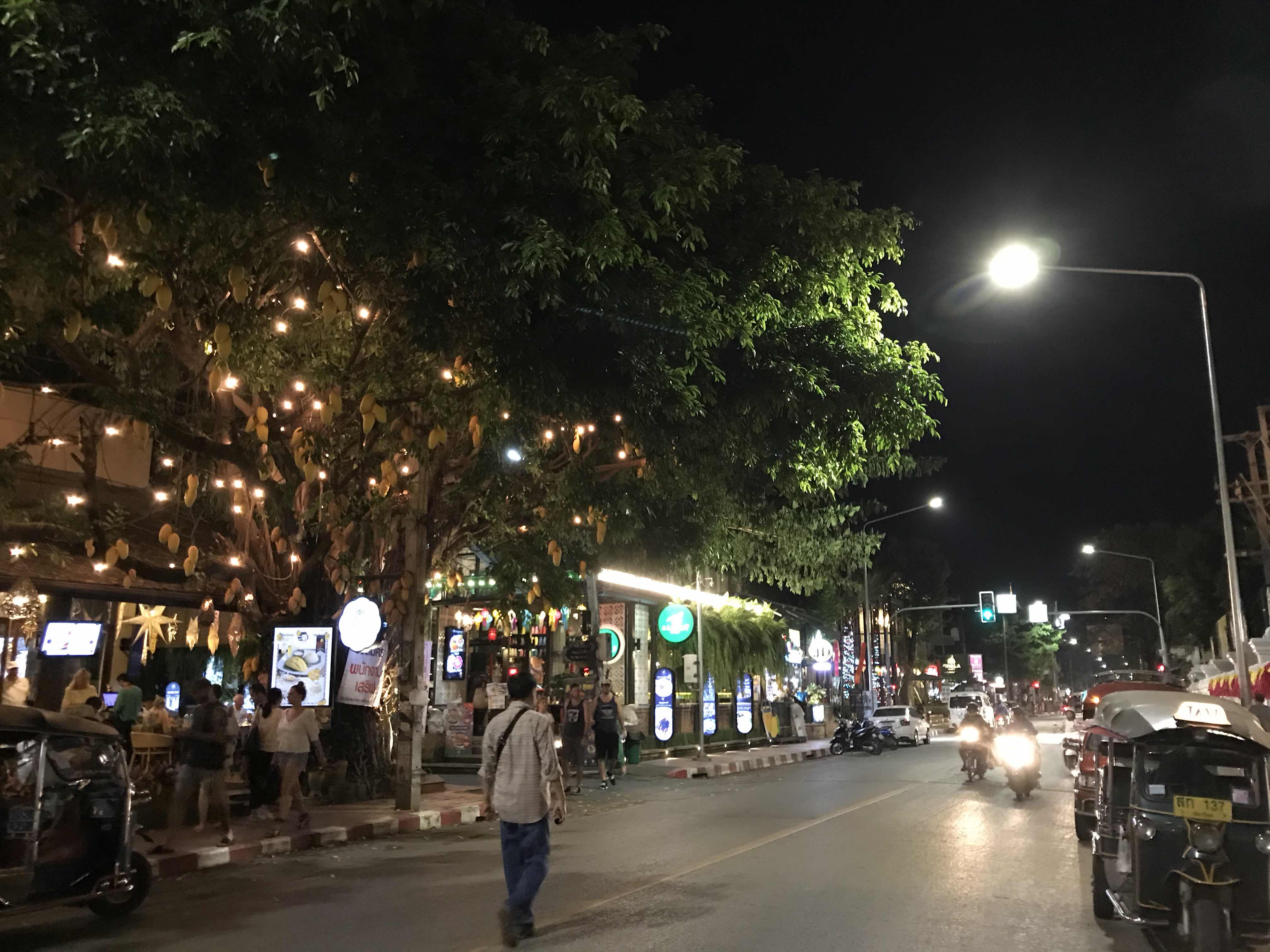 I was also surprised to see that, while some places look seedier at night, with no lighting and all shut, other places actually looked way better: a lot of restaurants and hotels here hang lanterns or fairy lights from the trees on their front lawns, which makes for very atmospheric (and very Instagrammable) house fronts. I walked into a small courtyard/mall kind of thing with shops and bars, and a tourist was having the time of his life watching one of those stands where they freeze ice cream and roll it over for an annoyingly long time (here they call it “fried ice cream”, which I think is misleading!). Quite the experience!