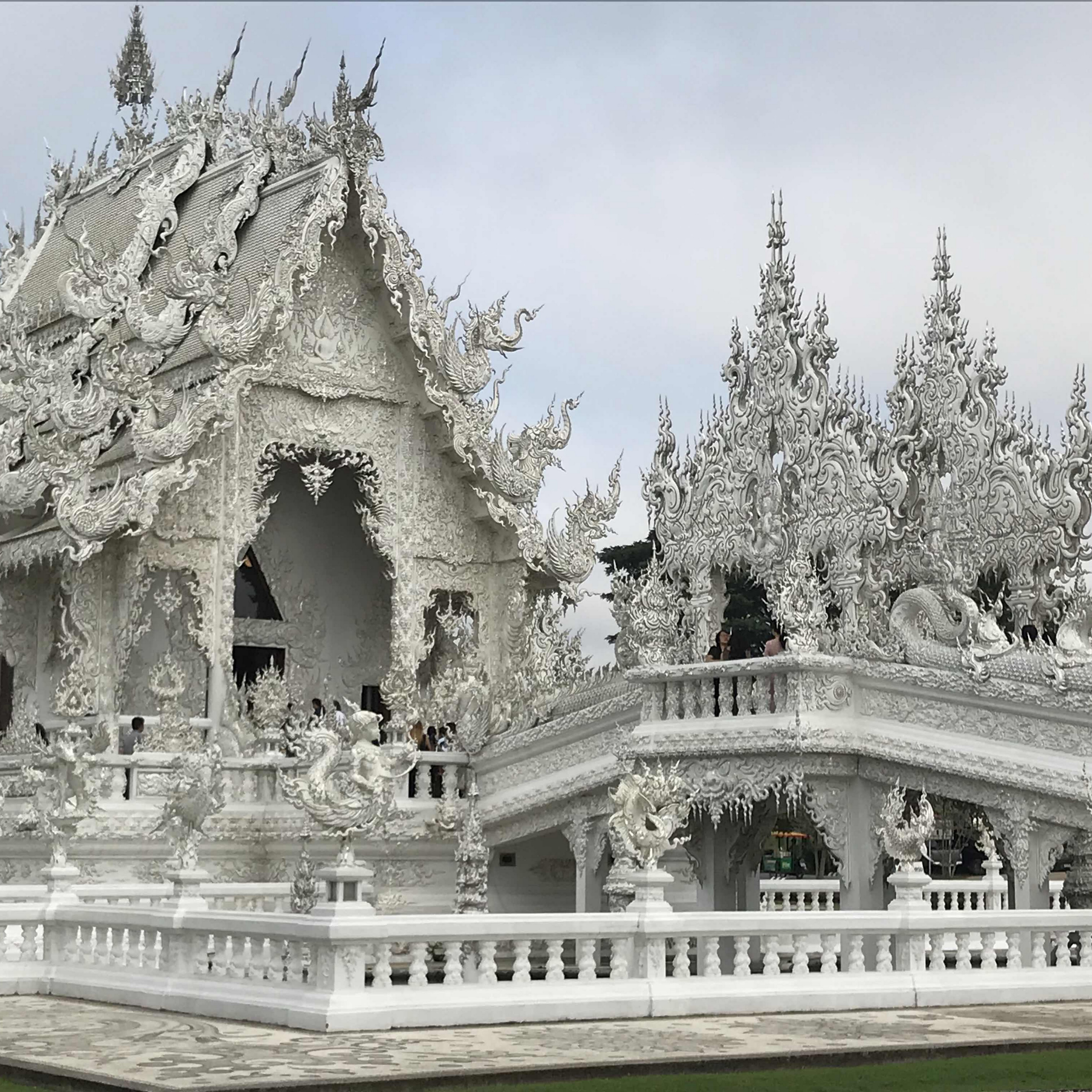 This was the day where I had to see Chiang Rai province… all of it! I was signed on to the tour that I found yesterday, if you were reading, which was officially called “Popular Sightseeing Tour” but which I refer to as the See Everything Tour because it’s absolutely packed with Chiang Rai highlights!

So a van picked me up at 8:30 and sure enough, in addition to the French girl and the American guy from yesterday they’d also picked up three pairs of Chinese people to fill up the group. Also, turns out the American is originally Mongolian and has also been to San Sebastian! What are the chances? 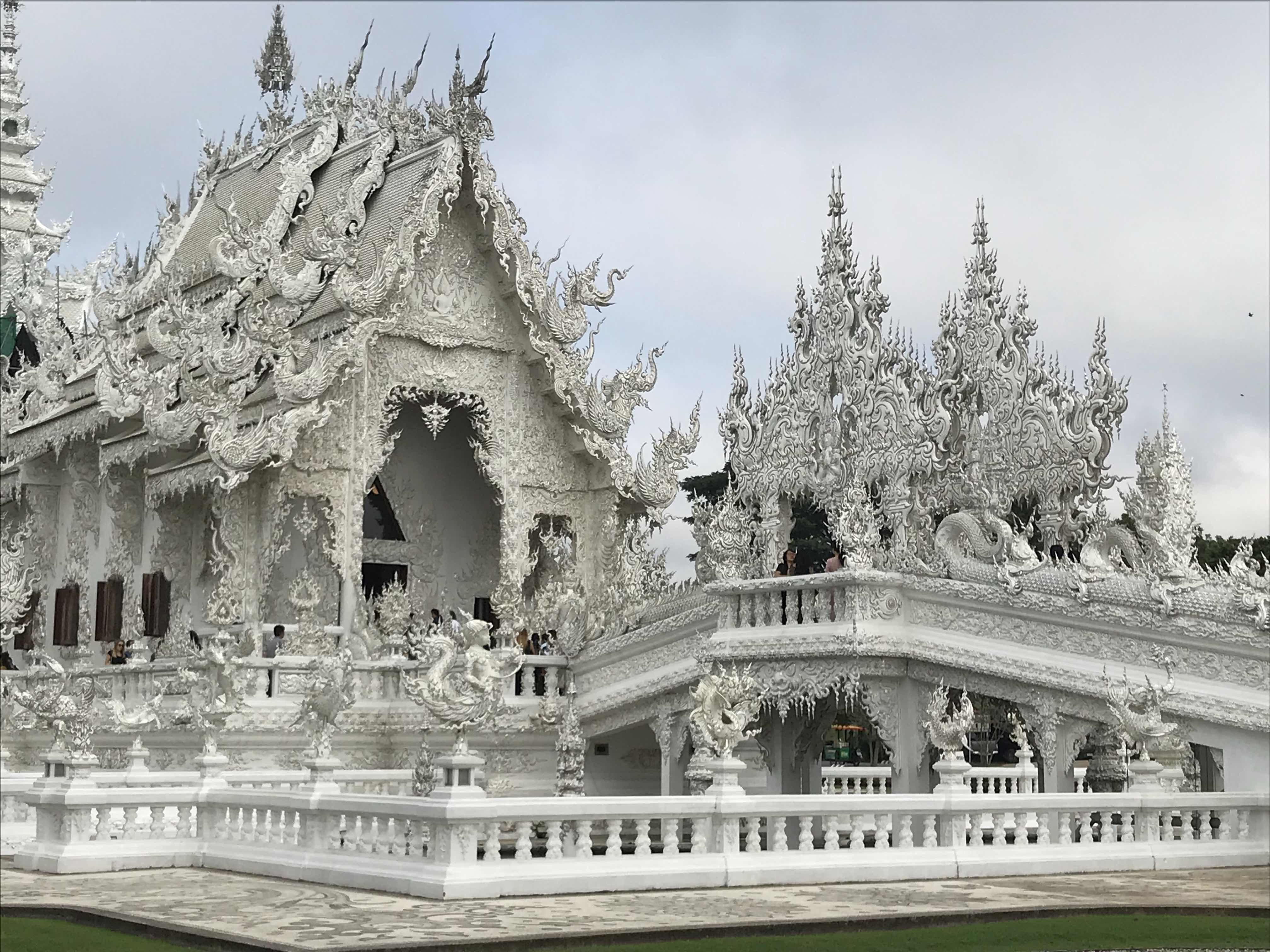 Our first stop was the famous White Temple, which is around 13 km south of Chiang Rai. It’s this stunning Buddhist temple, all painted white with mirror tiles on the edges, which has become one of Thailand’s most recognizable images. It is easy to asume that it’s a historic temple, but in fact it was only built in 1997! By one artist, because he wanted to! How crazy is that?!

As you arrive, you have to cross a bridge over a sea of white reaching hands, symbolizing hell, and then you land on the main building, which is the shrine to Buddha (no shoes or pictures inside). Because the space is smaller than the pictures would have you believe, it gets quite packed. 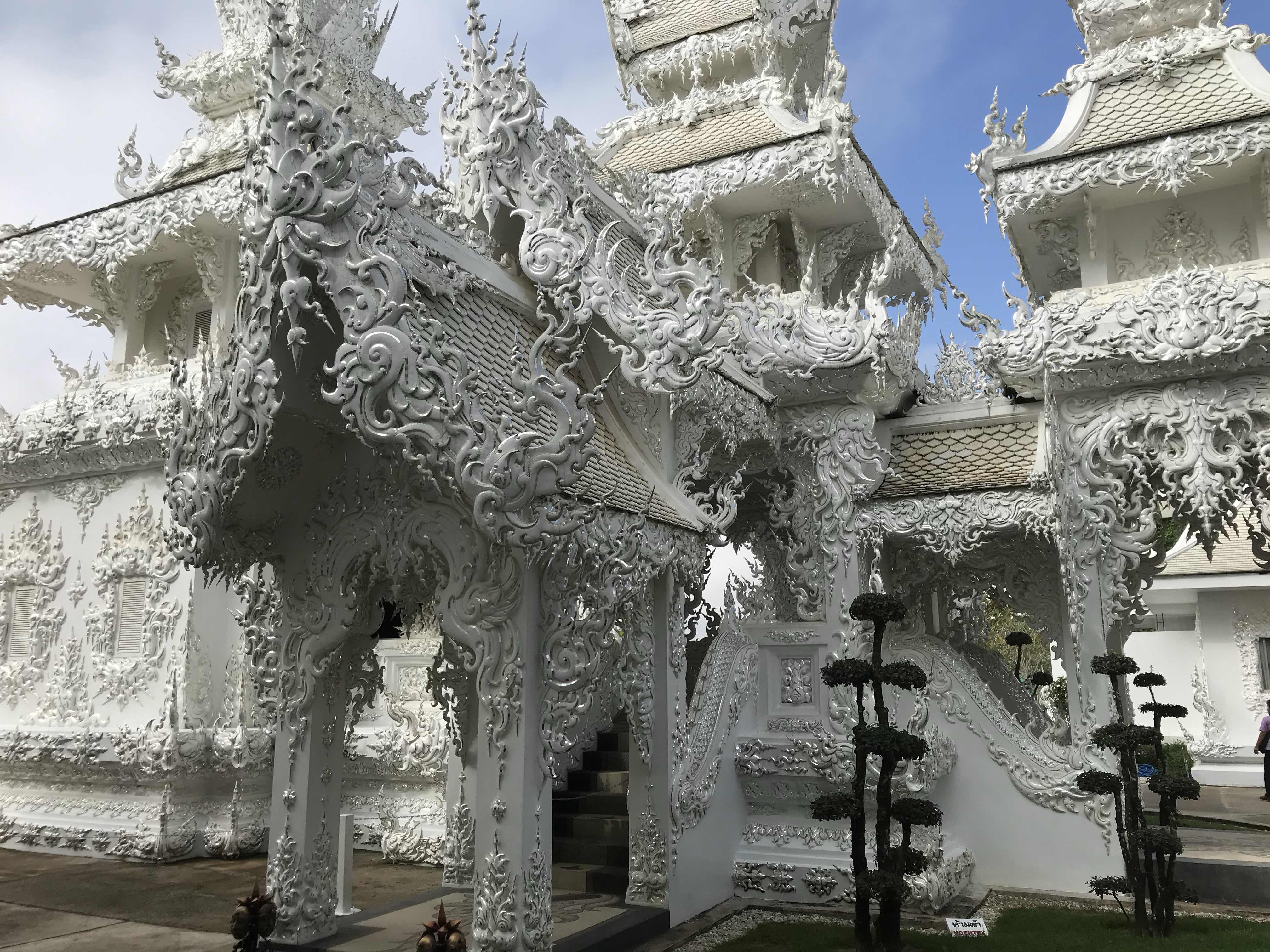 It is a beautiful building, and the entire compound is worth visiting as it also has pavilions, a garden, exhibitions and so on. Oddly enough, there is an entirely golden shrine to Hindu god Ganesha right there on the grounds, too. The modernity of the temple can be seen in design touches like the use of silver ornaments, but also in some decidedly incongruous images like the heads of Captain America and Deadpool hanging from a tree (?). 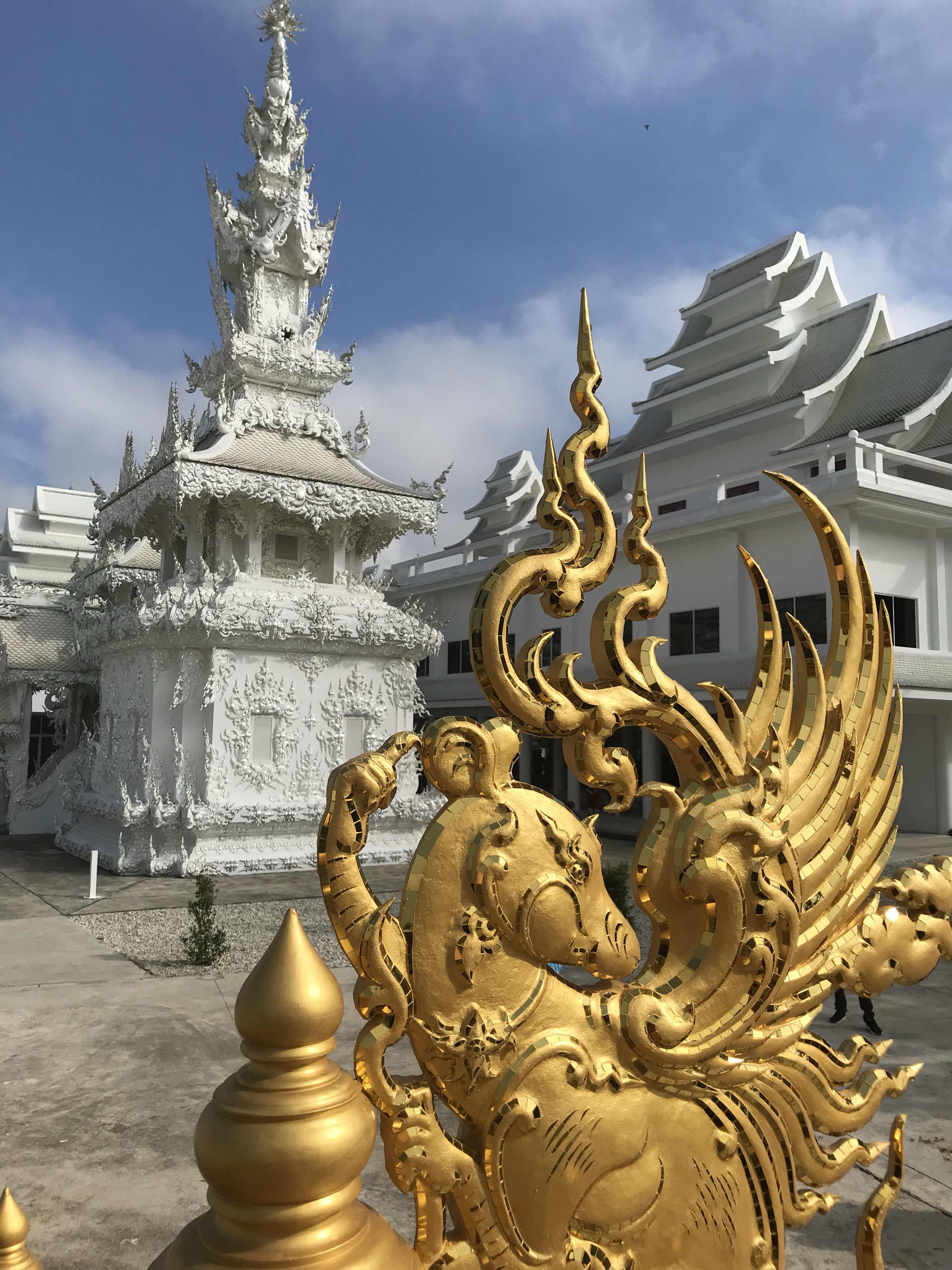 Our next stop was the Blue Temple, which is more straightforward: it is all blue and gold, ostentatious and garish but it kind of works in a way. If I thought the White Temple was new, this one finished construction in 2016!! The paint is barely dry! 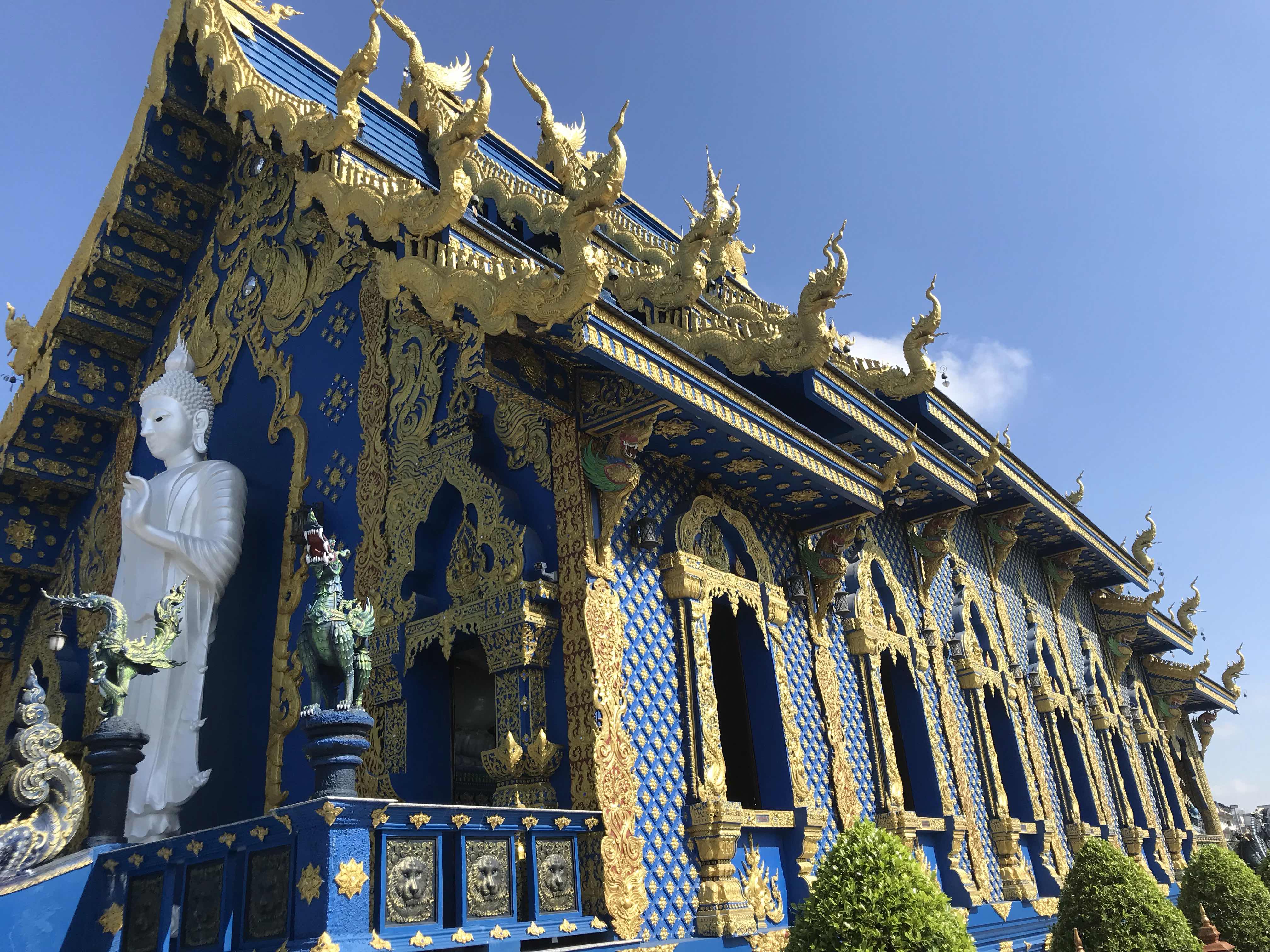 The weather had been benign early in the morning, but by now the clouds had parted and it was hotter by the minute, so I was happy that this visit was fairly short and we could climb back onto our air-conditioned minivan. 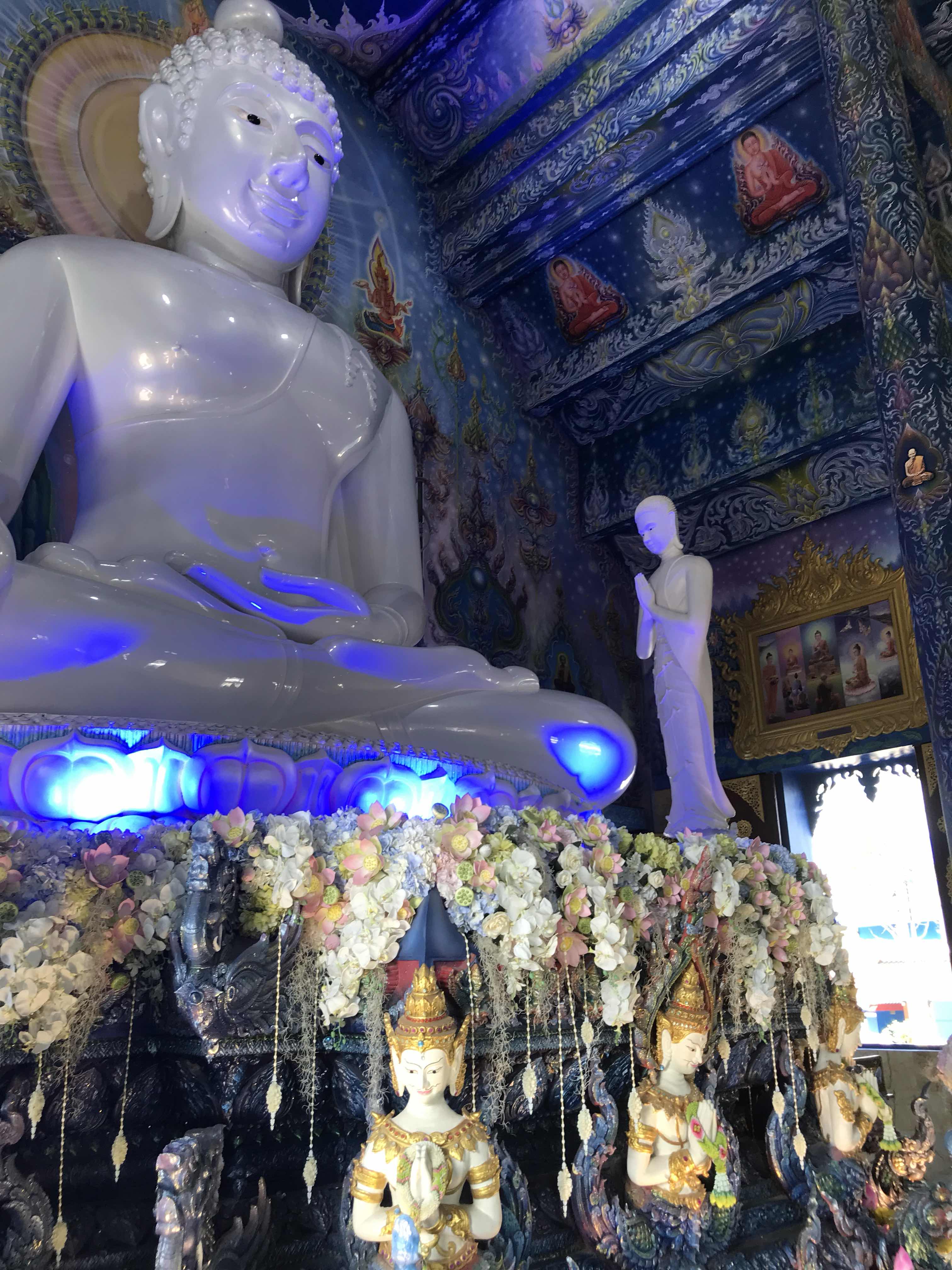 To finish our palette of colors, our next stop was the Black House, also called the Black Temple for contrast with the White Temple. This is a very strange place; it was the home a Thai artist made for himself and for his collection, and all three (home, artist, collection) are super weird. 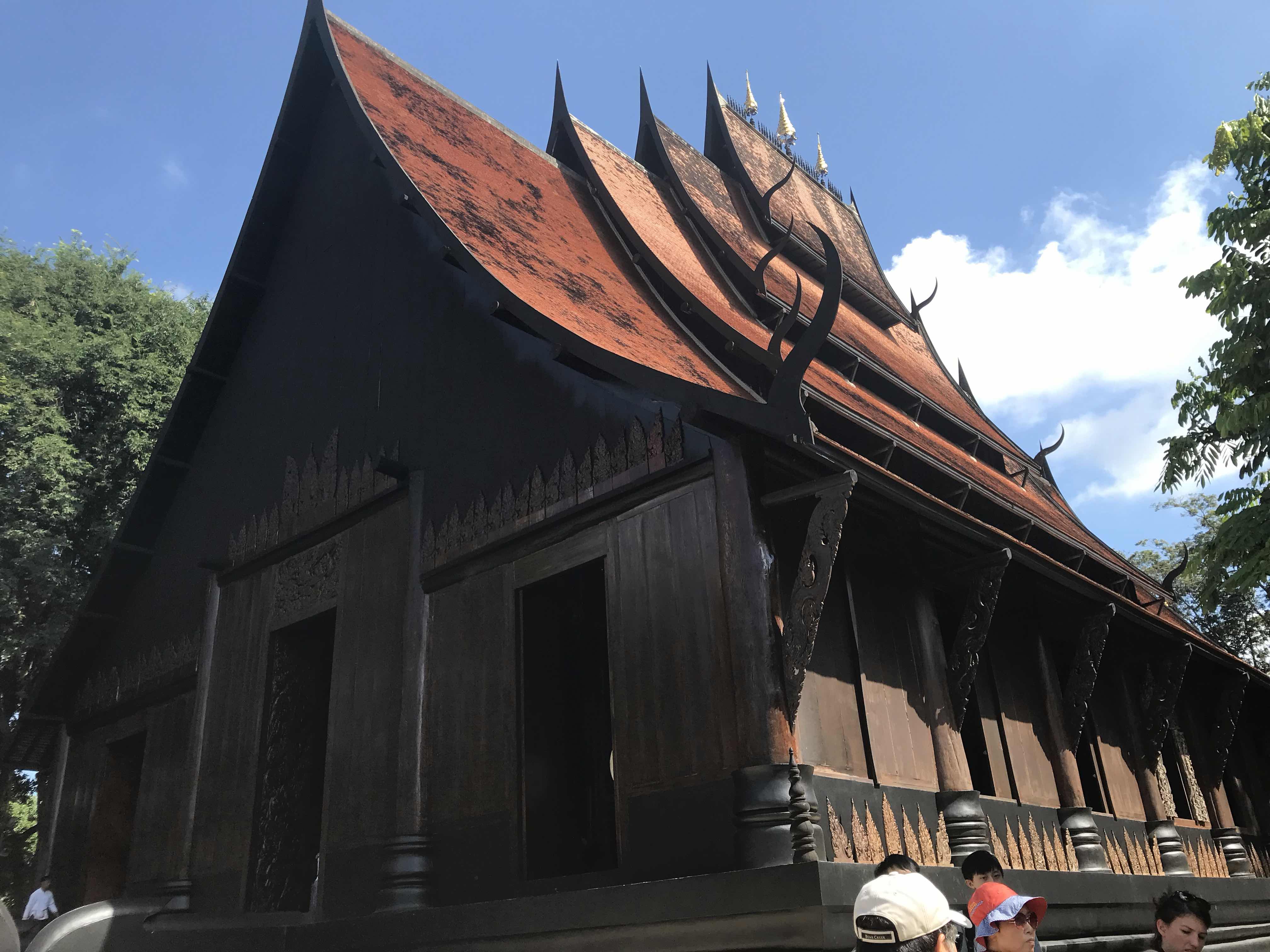 The structures themselves are all black or at best a very dark wood, some of them with pointy, slanted roofs that looked vaguely threatening, while others are more open and welcoming (there’s also one that looks like a submarine surfacing out of the ground…). When the houses aren’t sinister, though, their contents are: every available space is taken up by furniture made out of animal horns, entire crocodile skins, head and all, and various skulls and skeletons. Yikes! All that said, the visit was quite peaceful, because there were fewer people and the grounds are more expansive so you get to visit at your leisure. 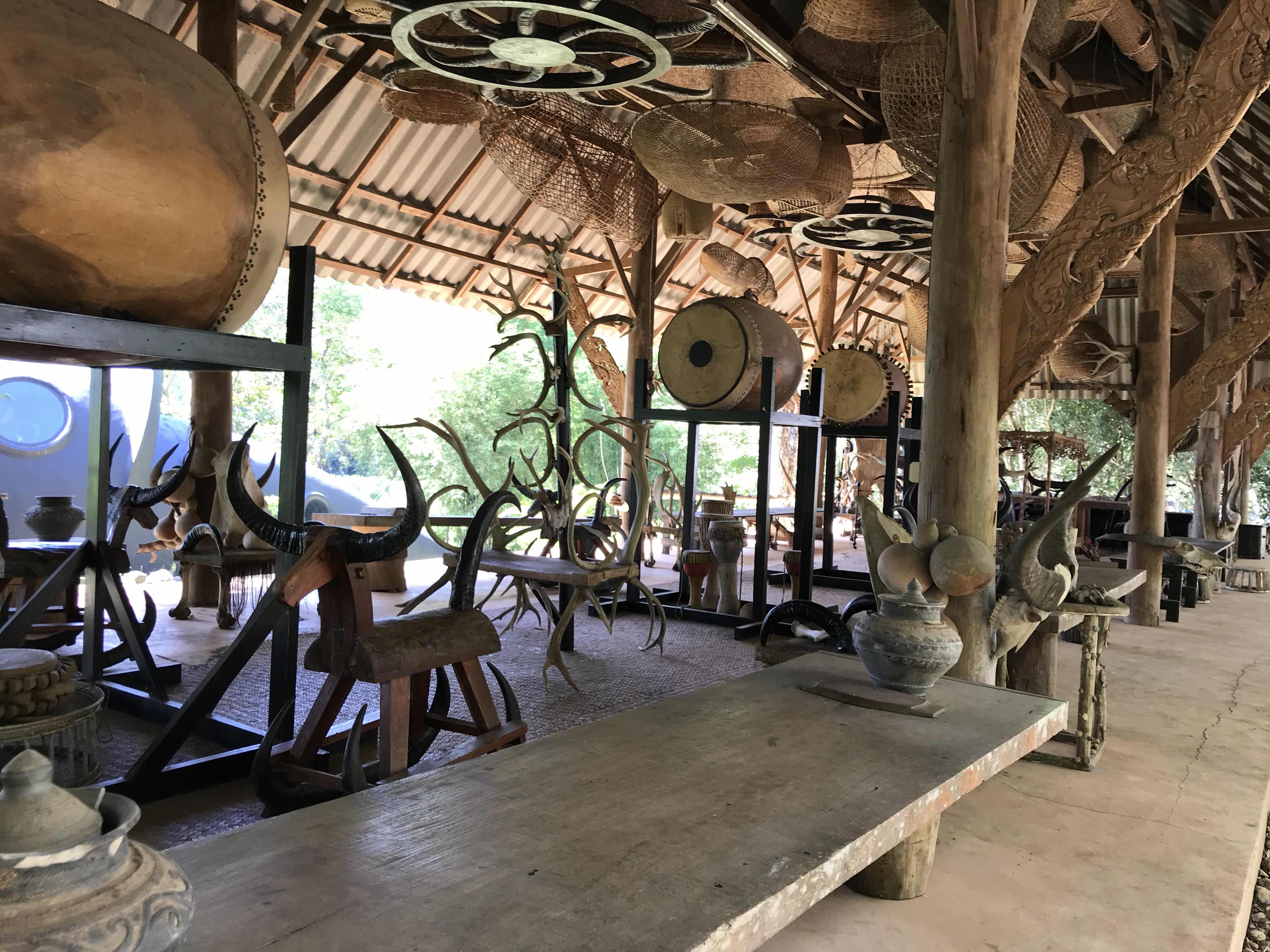 We kept the show moving, and took a bit of a drive to a hillier side of Chiang Rai, to the Choui Fong tea plantation. I really liked this one: it’s a very modern building on beautiful, rolling hills of shrubbery (the shrubs didn’t look like tea to me, but who knows). They grow Oolong tea here, and they gave us three different kinds to taste: one was light, the other one was bitter, and the third one was aromatized with flowers. 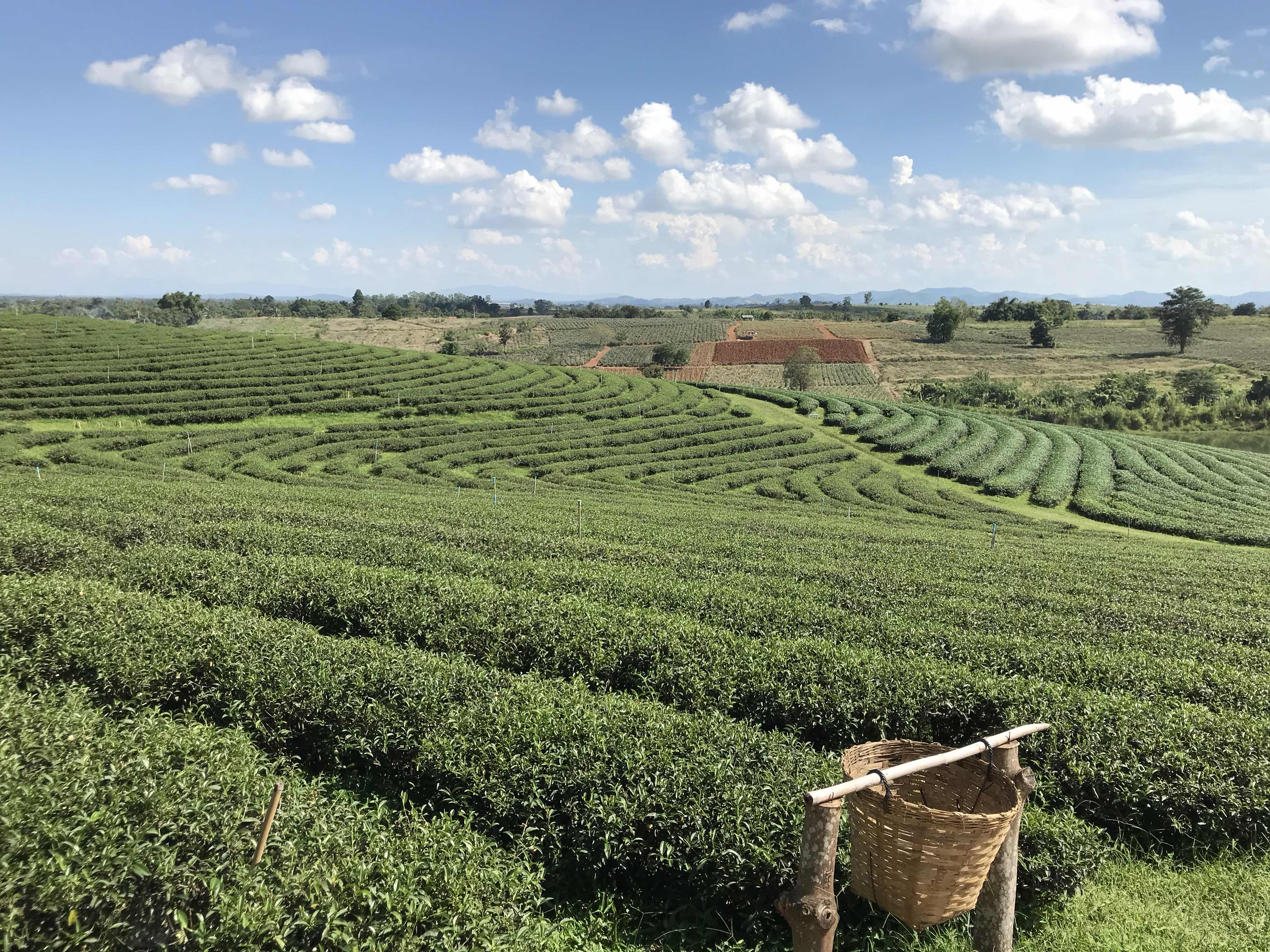 They had a well-stocked gift shop and a large café, but what I liked the most was the surrounding deck, which had stunning views of the countryside on either side. The plantation hills were pretty and well tended, but looking beyond you could see taller, rockier mountains with a wilder green. On the nearest valley there was a lake with a moon pavilion -imagine having your afternoon tea there! 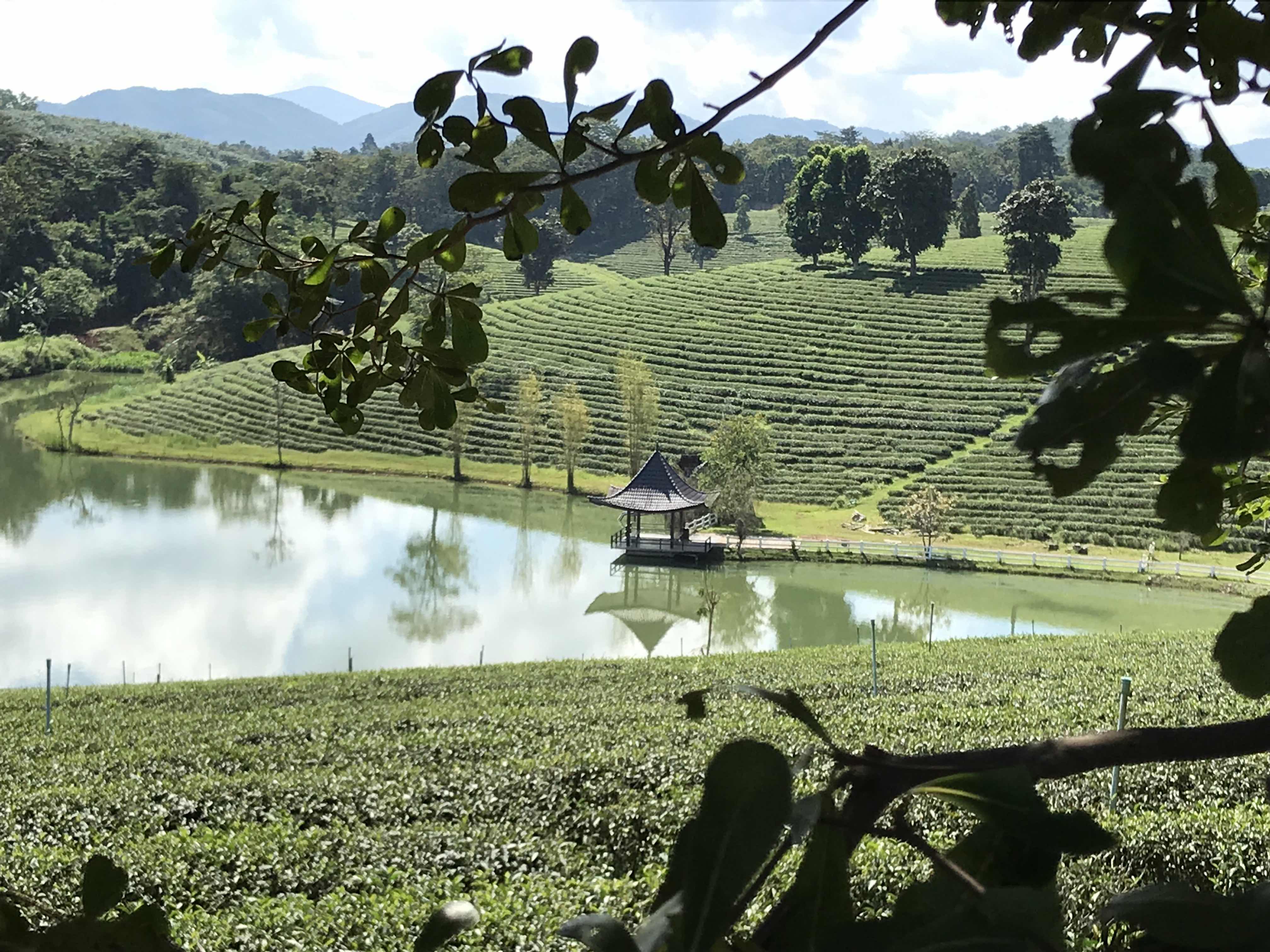 After this visit, we drove away and stopped somewhere for a Thai buffet lunch. Considering that the food in organized tours is usually vile, we got off quite well, and I could eat fried rice and red curry that wasn’t half bad, plus a very flavorful pineapple and baby banana as dessert.

Our guide polled us on whether we wanted to take a detour to visit a village of long-neck women, and we declined -I can’t speak for the others, but I would have felt uncomfortable going to gawk at the women as if in a zoo, and I don’t love the idea of supporting that practice anyway.

Instead we kept driving north, and the landscape was becoming more mountainous. Our surprising next stop was a monkey mountain: some sort of enclosure right on the foot of fully vertical cliffs, inhabited by loads of monkey families! Indeed, there were monkeys of all ages and sizes all over the place, chilling on the roofs, playing with each other, or trying to get food off tourists. We were instructed to hold on to our belongings and to not make eye contact with the monkeys, lest they become aggressive, so I was a bit apprehensive, but for the most part they paid us no mind, springing into action only when a tourist bought some fruit and started giving it away. 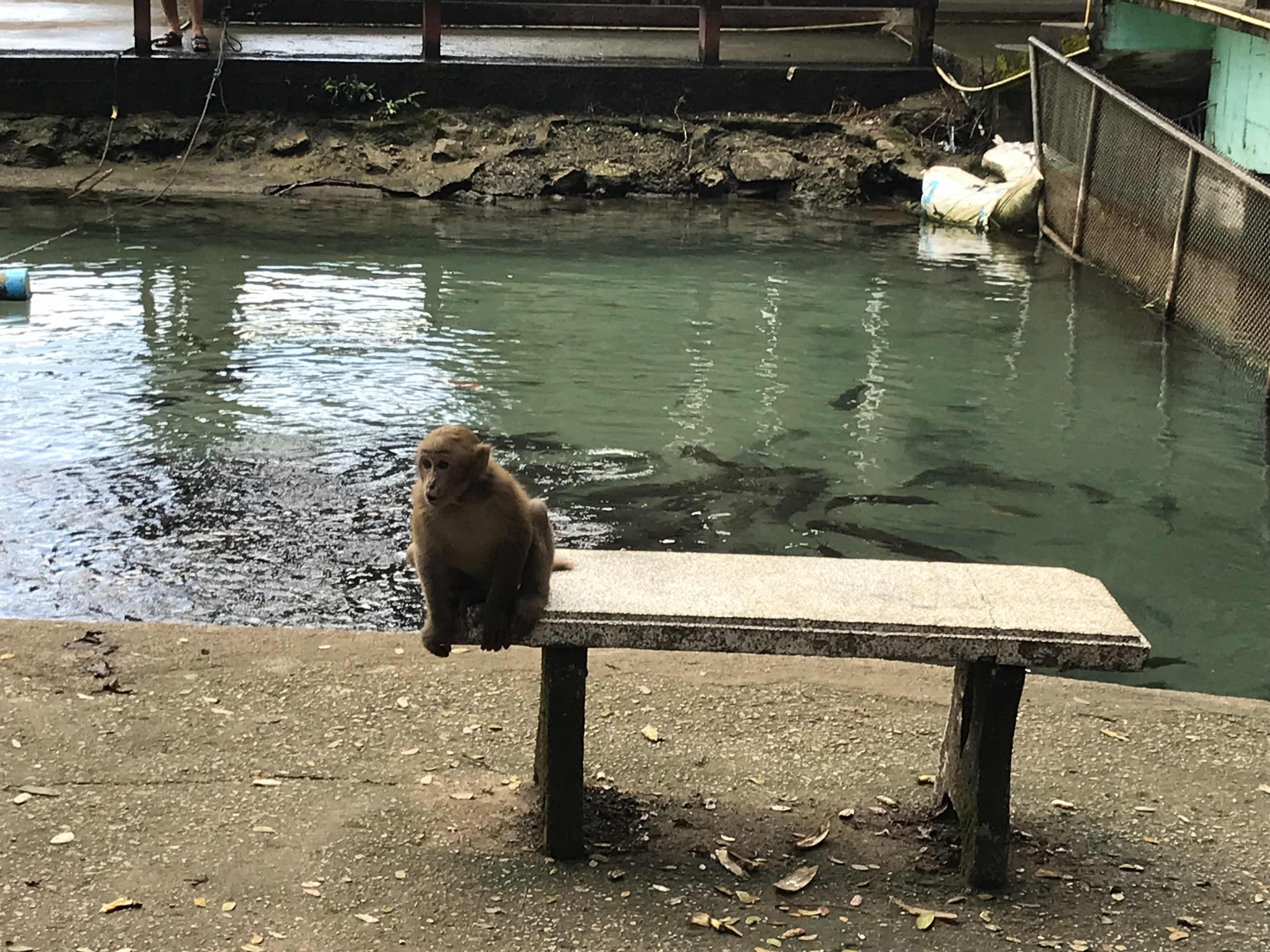 While all this was going on, two young monkeys were playing by climbing up the rock face of the mountain, then jumping down into the river, then back up again. Cute!

Our last visit was also the longest drive, which was fine by me as I was already tired. We drove all the way north to the Golden Triangle, which is the name given to the area where Myanmar, Laos and Thailand meet on the Mekong river. It was so called because it was a critical smuggling zone in the opium trade, and today it seems to get a lot of regular traffic from people going from one country to another. 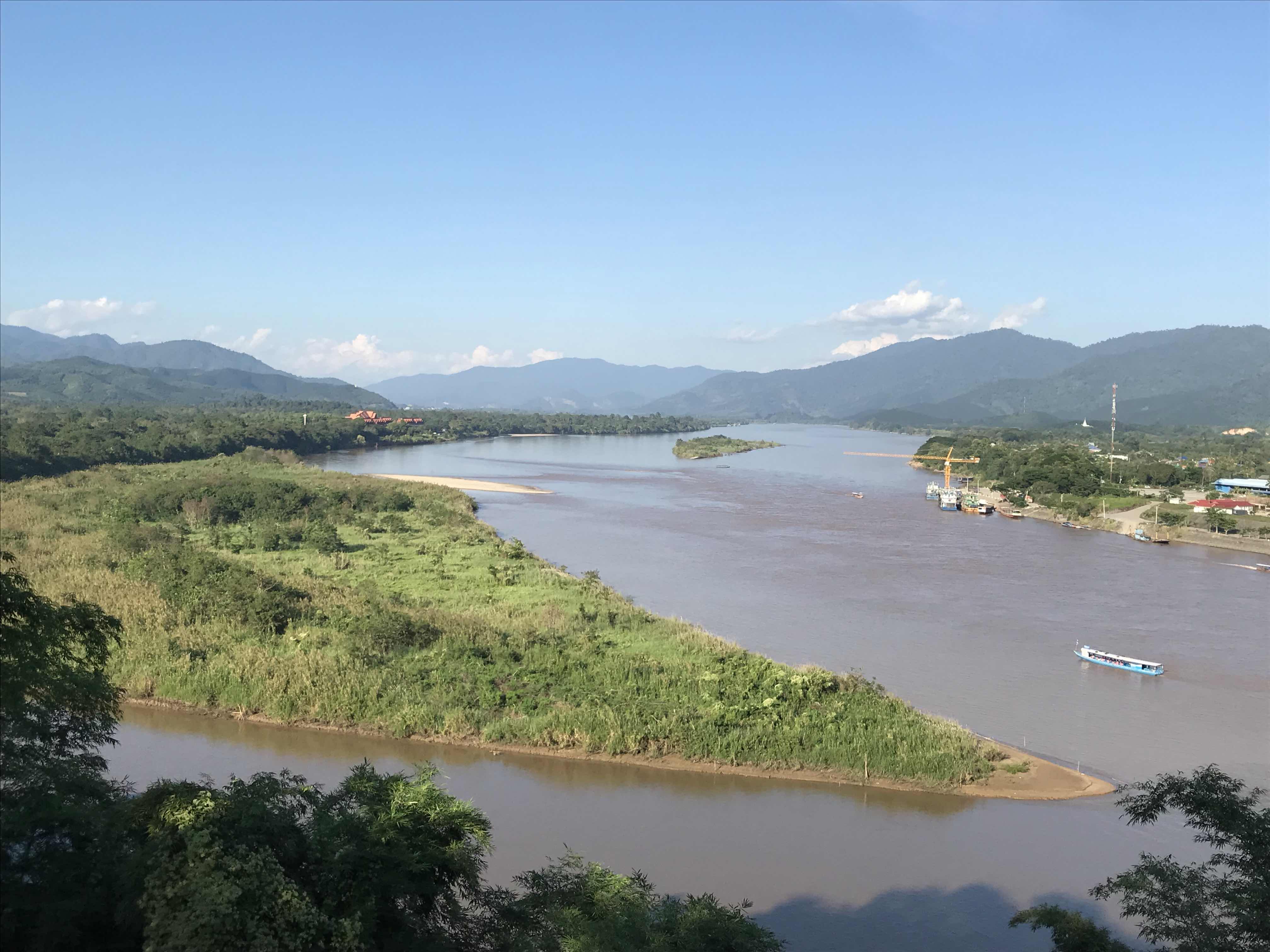 Interestingly, gambling is outlawed in Thailand, but it remains legal in Myanmar and Laos, so a lot of Thai people who live close to the border make day trips to Laos casinos, and that’s called Laos Vegas!

I had very little interest in this leg of the trip, as all there is to do is to look at the three countries from afar, but in the end I was rather pleased to have seen it: seeing the enormity of the Mekong river from a vantage point is quite striking, and the dusk sunlight bathed everything in a very flattering golden shine.

The only drawback is that the drive back was an hour and a half; I could certainly use the rest, but by then I really wanted to be back in my hotel with my feet up, catching up on the news. I practically leapt out of the minivan when we finally arrived in Chiang Rai! I took the chance to stop by the bus station to get a ticket for my trip to Chiang Mai tomorrow -but it was 19:00 already, they were almost closing, and all morning tickets had been sold out! Ack! The earliest I can leave is 16:15. Now to figure out what to do with myself all day tomorrow…