Today I waved goodbye to hot, sweltering Bangkok at nine in the morning, by taking a cab to Don Mueang airport. The whole trip took about an hour and around 300 baht (€8), including two separate tolls that the passenger must pay directly. It’s not expensive, by any means, but it is annoying to have to get out your money on three different instances for one ride!

I took a short flight to Chiang Rai, in the north of Thailand, close to the mountains and the Myanmar/Laos borders. Bizarrely, the airport has green wall-to-wall carpet in its arrivals area. There’s a taxi counter right outside, and they quoted the price to take me to my hotel beforehand (160 THB, or €4.28).

As I looked out of the taxi window, Bangkok seemed very distant indeed. This landscape is more mountainous, and where Bangkok seemed in a constant battle with its own jungle, all overrun with trees and shrubs, the vegetation here seems drier. It’s also less hot, at a comparatively breezy 28°C, with the sun peeking in and out of the cloud cover.

I got off at the cheerily named Hi Chiangrai Hotel (hi!), which is modest but spacious and new. It also has a small pool, although it is in the middle of the indoor hall so I don’t know if it’s gonna do the trick as refreshment!

I went down to reception to try to book myself a tour for tomorrow; this is kind of a must, because the town of Chiang Rai proper doesn’t really hold any interest. It serves mostly as a hub for hillside trekking and other types of visits to the countryside, because all around here there are multiple ethnic minority villages, tea plantations, rice fields, waterfalls, and the Golden Triangle, which is the area around the Mekong river that separates Thailand, Myanmar and Laos.

So, here’s a word about travelling solo. It has plenty of advantages, namely that you spend your holidays doing whatever the hell you want, whenever you want, all the time! But, although few, it also has its downsides, chief among them that any kind of organized tour is made for couples and families. When I asked for tours at reception -they barely spoke English in the first place, and interestingly what the girls talked among themselves sounded to me closer to Chinese than Thai- it turned out that all their tours were private, meaning they didn’t have open groups that a single person could join. 2 person minimum!

What I did get from them was directions to a travel agency they recommended where I may be able to beg for a spot in an already scheduled group. Thankfully this place was two minutes from the hotel, so off I went! 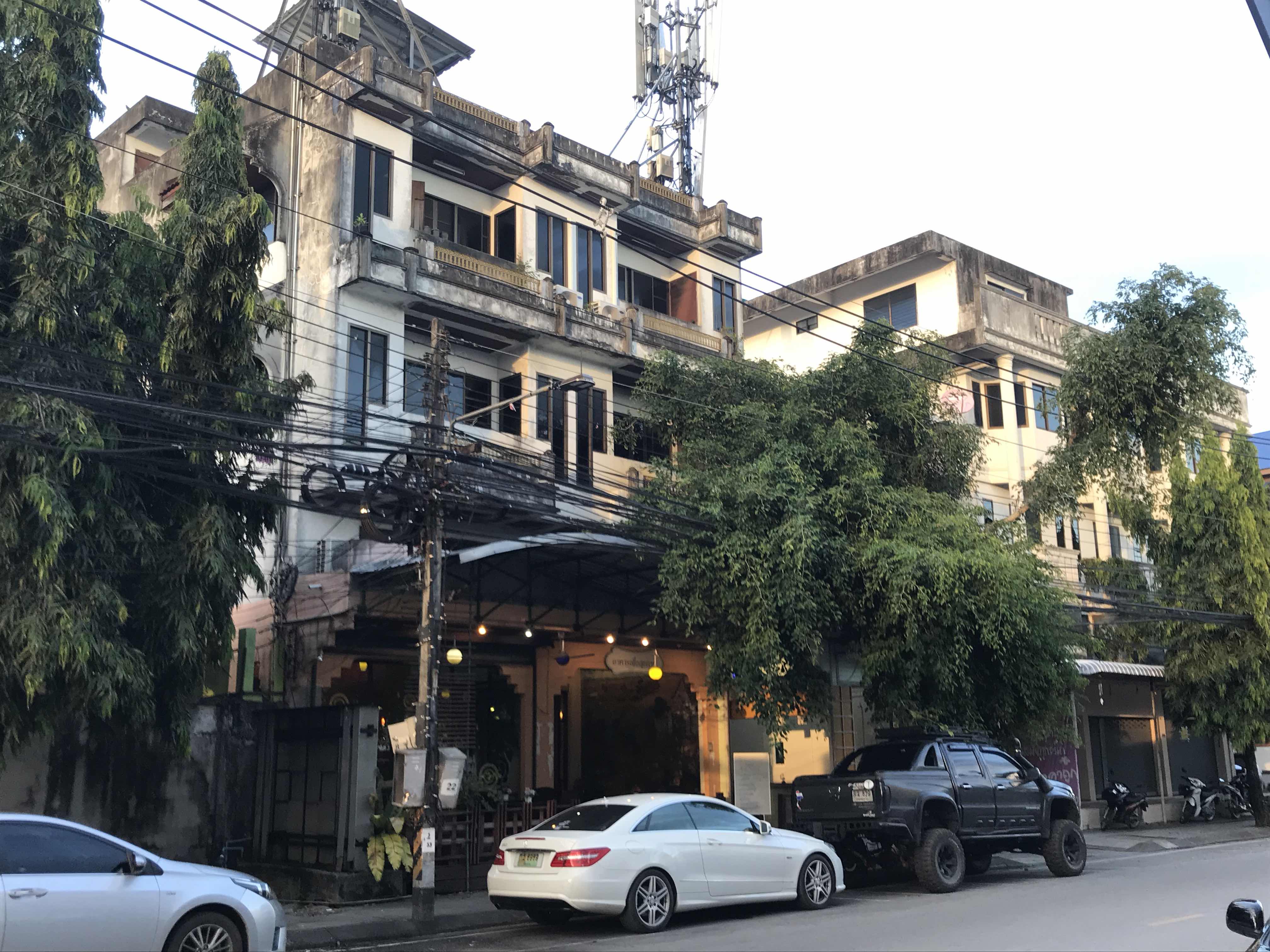 I found the place, the guy working there was extremely friendly, kinda loopy, and extremely accommodating: he was assuring me that for sure they’d find some group to stick me into so that I wouldn’t have to book one just for myself, when a French girl who walked by joined us also asking for tours. I had to interpret for her from French to English and back; I couldn’t tell if she just didn’t speak English (which would be surprising, given she seemed to be in her twenties) or she just couldn’t understand the travel agent’s heavily accented English, which admittedly takes some getting used to.

So there being two of us, we could book our own tour, rather than having to depend on others. She wanted to see the Golden Triangle; I’d read that despite its historical significance it isn’t terribly interesting to visit, so I was more interested in visiting the hillside tribal villages. Thankfully all of us (the guide included) seemed united in our flat rejection of any kind of elephant-related business; there are sanctuaries in Thailand that care after elephants humanely and let you see them without detriment to them, but you never know, so I don’t want to risk it.

We were trying to split the difference when an American guy joined us, so in the end we opted for the See Everything tour which takes all day and covers pretty much everything one could possibly want to see around Chiang Rai, including the famous White Temple, which I’d meant to visit today, plus a village and the Golden Triangle. It was 1,000 THB per person (€26), which is certainly cheap for an entire day of touring.

(At one point the guide asked me where I was from and why I spoke English and French. I said I was Spanish, and he said “Oooh, I’ve been to Spain, to…” and this is where I expected him to say “Barcelona”. He said: “San Sebastian!” My eyes went wide. “That’s… that’s where I’m from.” “You Basque! I spent three months in Basque Country.” He proceeded to tell me all about his itinerary. I never cease to be amazed)

Since the Everything Tour tomorrow also includes the White Temple, I was now out of a plan for the afternoon, so instead I located the bus station to plan for my trip to Chiang Mai come Sunday, and I also went to the Hilltribe Museum. Its collection is pretty dire, mostly just farming implements and a few traditional costumes, but it does have a lot of info on the makeup of the different ethnic minorities that live in these mountains. Turns out there are Black Hmong here, like in the mountains of Sapa in Vietnam (you can read about them in this very blog). That means… druglord grannies! Apparently the opium trade was significant around these parts too… 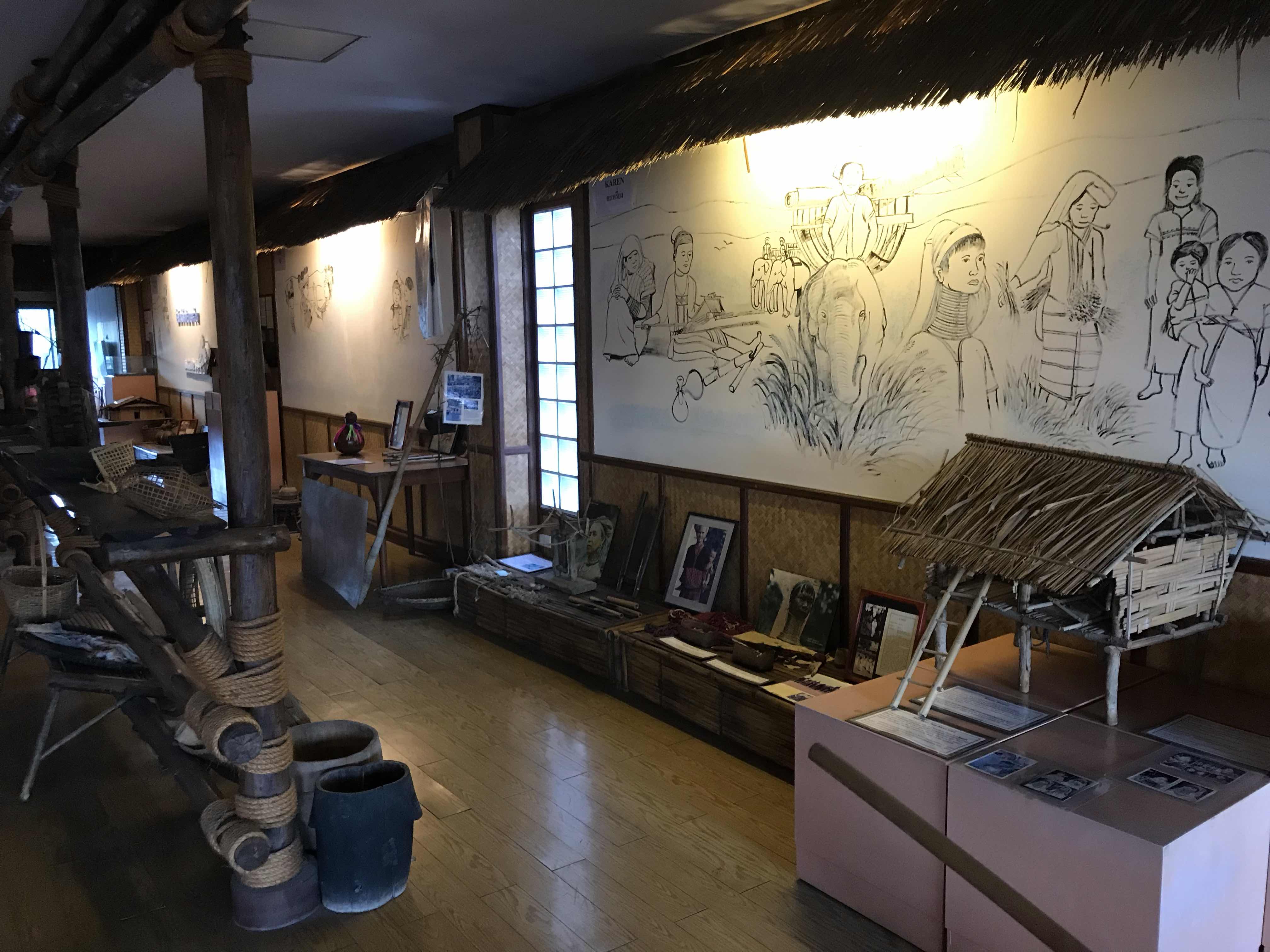 On the way back, I stopped at a beautiful cat café so that I could sit somewhere air-conditioned and have a snack. As I was finishing my tea though a cat curled into my lap and promptly fell asleep, rendering me immobile. So I’m taking the chance to write this entry on my phone to kill the time until the cat decides to wake up, because I don’t think I have it in me to push him aside! 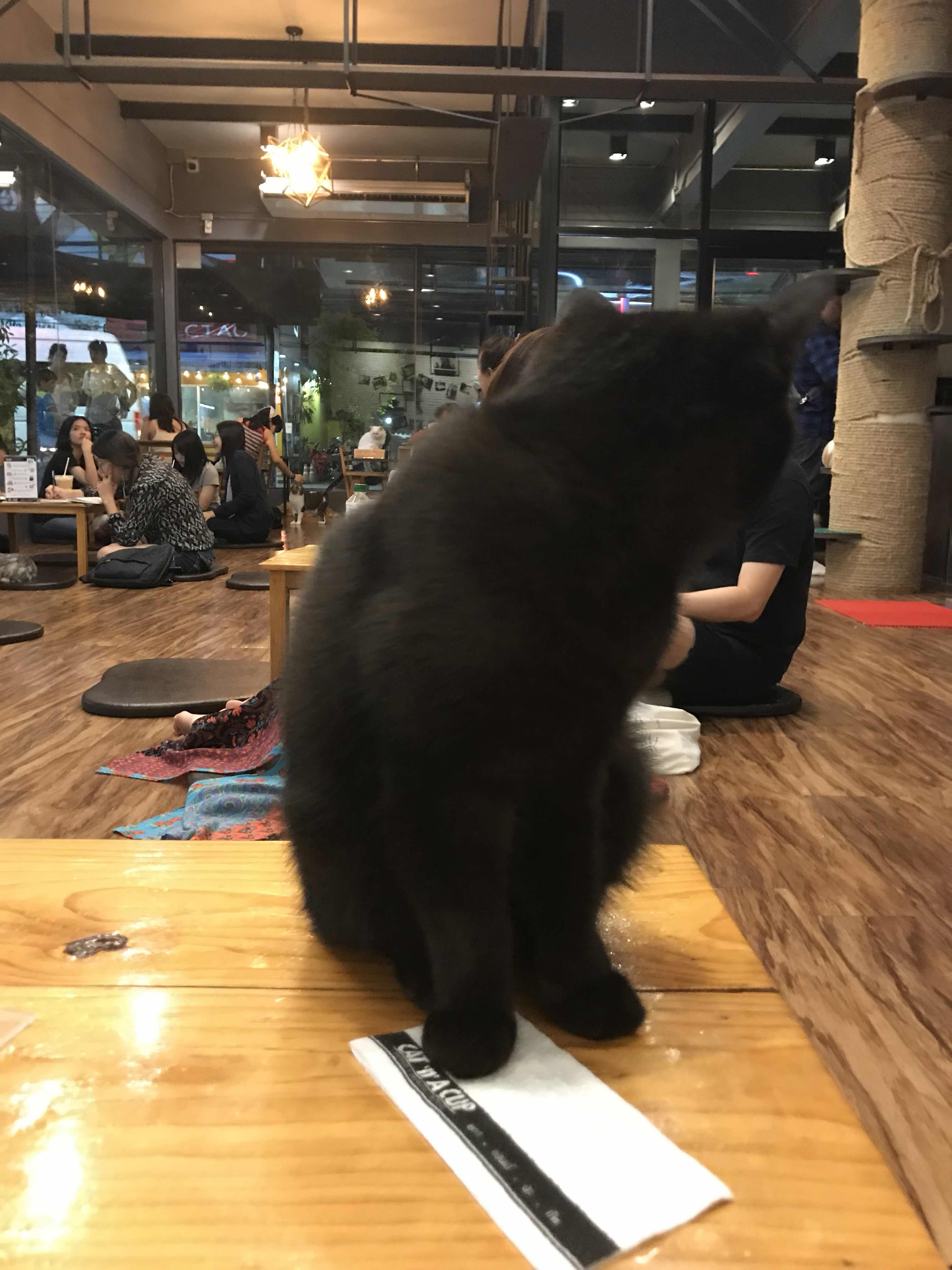 Okay, eventually the cat did wake up, so I took the chance to gently nudge it off my lap. It gracefully stepped off and pranced over to sit on someone else’s lap, where it immediately rolled up again. I almost told the guy “Nooo, run before it’s too late!”.

It was dark by now and my legs were numb from feline paralysis, so I headed over to a nearby restaurant for dinner -overpriced and unremarkable, unfortunately; hopefully I can do better tomorrow but the offer around this area didn’t look very enticing generally.

Time to rest now and prepare for an intense day of touring tomorrow!