It’s day trip time! My plan for today was to go on a day trip to Ayutthaya, Thailand’s ancient capital, just 70 km north of Bangkok. Its history is fascinating: it was a thriving metropolis as early as during the 14th century, became a center of culture and arts, but then was invaded and razed by the Burmese in the 18th century -the loss of literature alone would have been staggering. The ruined city was abandoned, and the Thai capital moved to what is now Bangkok, so a lot of remnants of temples and buildings have survived to our times and can now be visited as a mini-Angkor of sorts.

I had considered doing the trip as part of a tour, but I couldn’t find any that I liked: they all pad their time way too much with river cruises, Thai massages, cooking classes… So I decided to chance it and do it all by myself, which proved to be a bit of a challenge.
First off, if you want to go to Ayutthaya from Bangkok, you have to go to Mo Chit station, so first thing I did was go get a cab to Mochit. After s looong drive (all distances in Bangkok are enormous) I was dismayed to find that I had been dropped off at the Mo Chit BTS station, which turns out is completely separate from the Mo Chit Bus Station. To get from one to the other I had to walk around a park and across a maze of higways in the sweltering heat, with no indications except an unclear dot on Google Maps.
When I finally found the bus station’s passenger terminal, drenched in sweat, I was told that in fact minivans depart from a different station, this one “across the street” -except of course across the street means having to make your way over like an eight lane highway. I was tempted to hail a cab right back to the hotel, but I persevered and made it to the third and final station. Here at least, I found that a spot on an air-conditioned, comfy minivan costs just 60 THB (€1.6!), which I thought was a bargain considering that cab rides within Bangkok cost between 100 and 200 THB. The trip takes about an hour and a half, which for me is a perfect opportunity to rest my feet and drive my body temperature down to normal!
Once in Ayutthaya proper (a full new city was built just outside the ruins of the old one) lots of tuk-tuk drivers advertised themselves to me, to do like in Angkor and drive me from temple to temple, but I’d studied the map last night and found that the distances are pretty manageable, with a 15 min walk between the two major sites thst interested me, with two temples in each one. 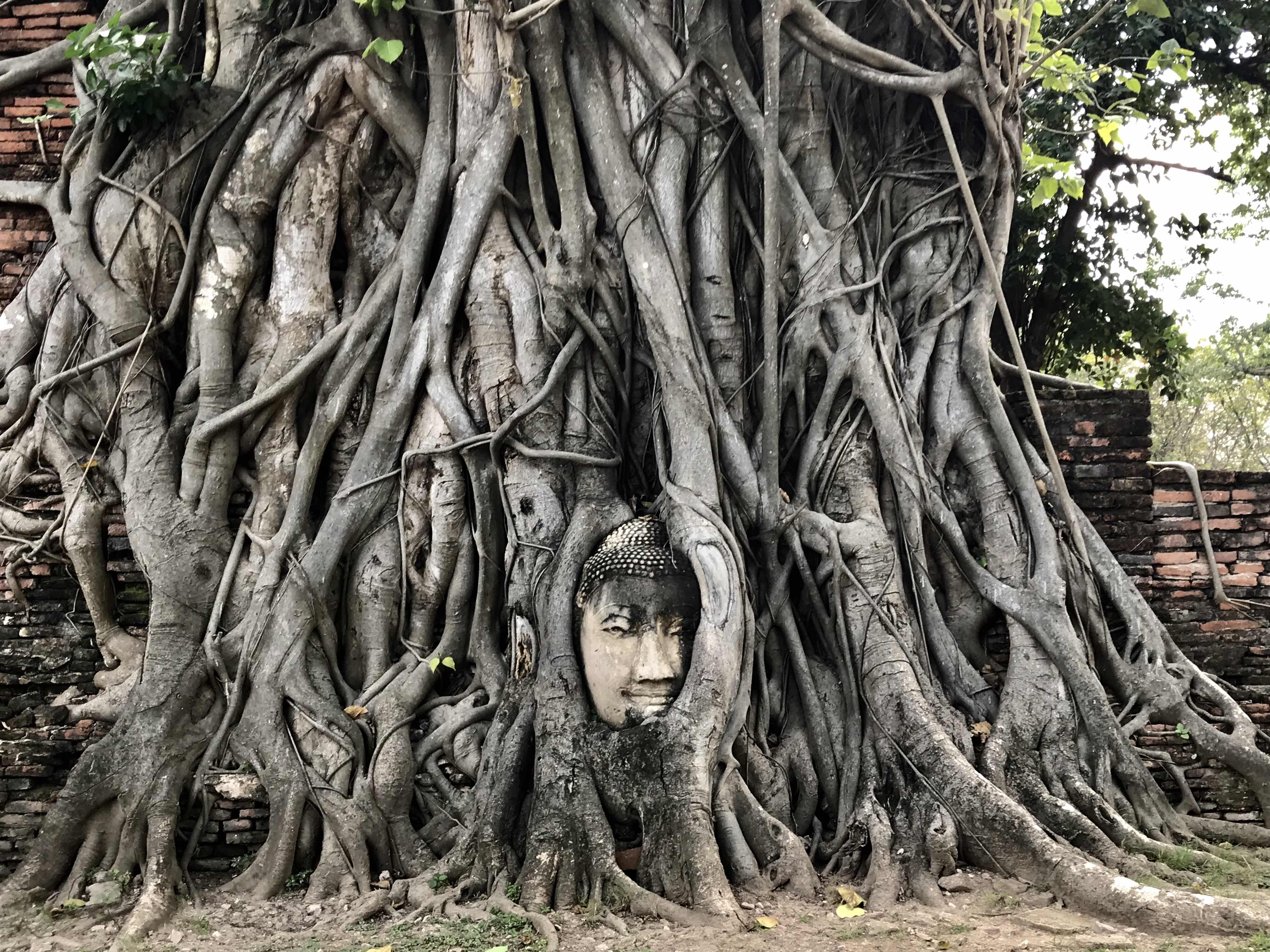 So, finally, the crown jewel, the most striking image in Ayutthaya, you’ve seen it in so many pictures: a Buddha head peeking out of the roots of a bodhi tree. It is in the temple of Wat Mahathat (each temple has a 50 THB ticket), which was built in the 14th century (!). The head is relatively small, but its antiquity is impressive, its expression is inscrutable, and the roots are visually arresting. There is a security guard standing by just to make sure people don’t take selfies standing up: it is blasphemous to represent oneself as being higher than Buddha, and since the head is on the floor, one must kneel or sit in its vicinity. I already knew about this (it came up in an episode of Halt and Catch Fire, of all places), but some tourists were pretty scared when the guard came yelling at them and they couldn’t decipher why. 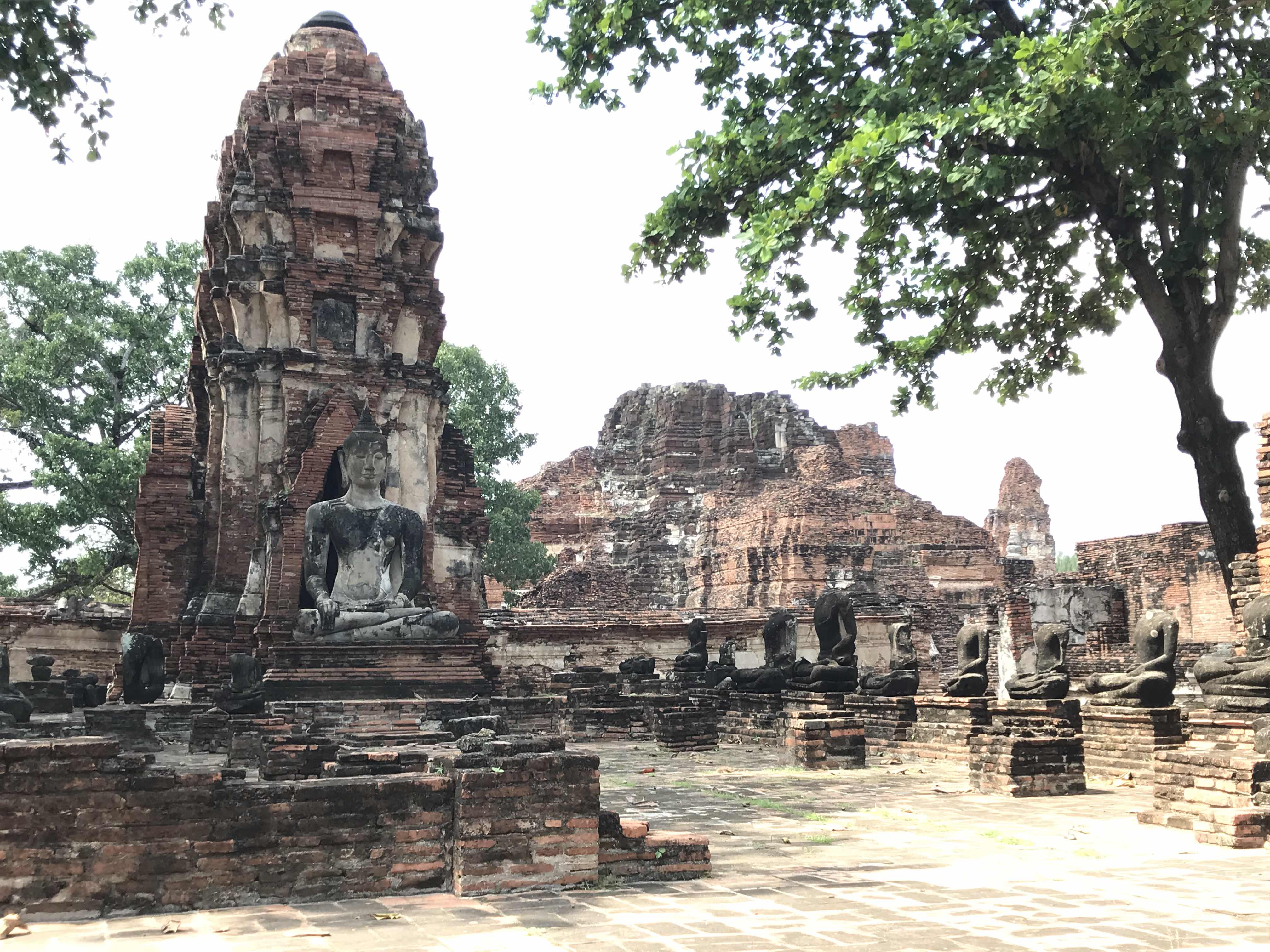 The rest of the temple is mid-sized, with a lot of crumbled ruins and busted Buddha statues, but there are some walls and arches that gave me an idea of the sort of splendor Ayutthaya must have enjoyed in its heyday. I was shocked to see that all the structures were made of red brick and mortar: if you only looked at the walls, you could not tell them apart from a European building of the same time. This is in contrast with the temples of Angkor, which were all made of stone.
When I came out it was around 11:30, and the sun was starting to shine, so I got myself the most delicious, most refreshing iced mango juice ever right outside the temple entrance. I was a very happy camper and it was just 35 THB (€0.95)! 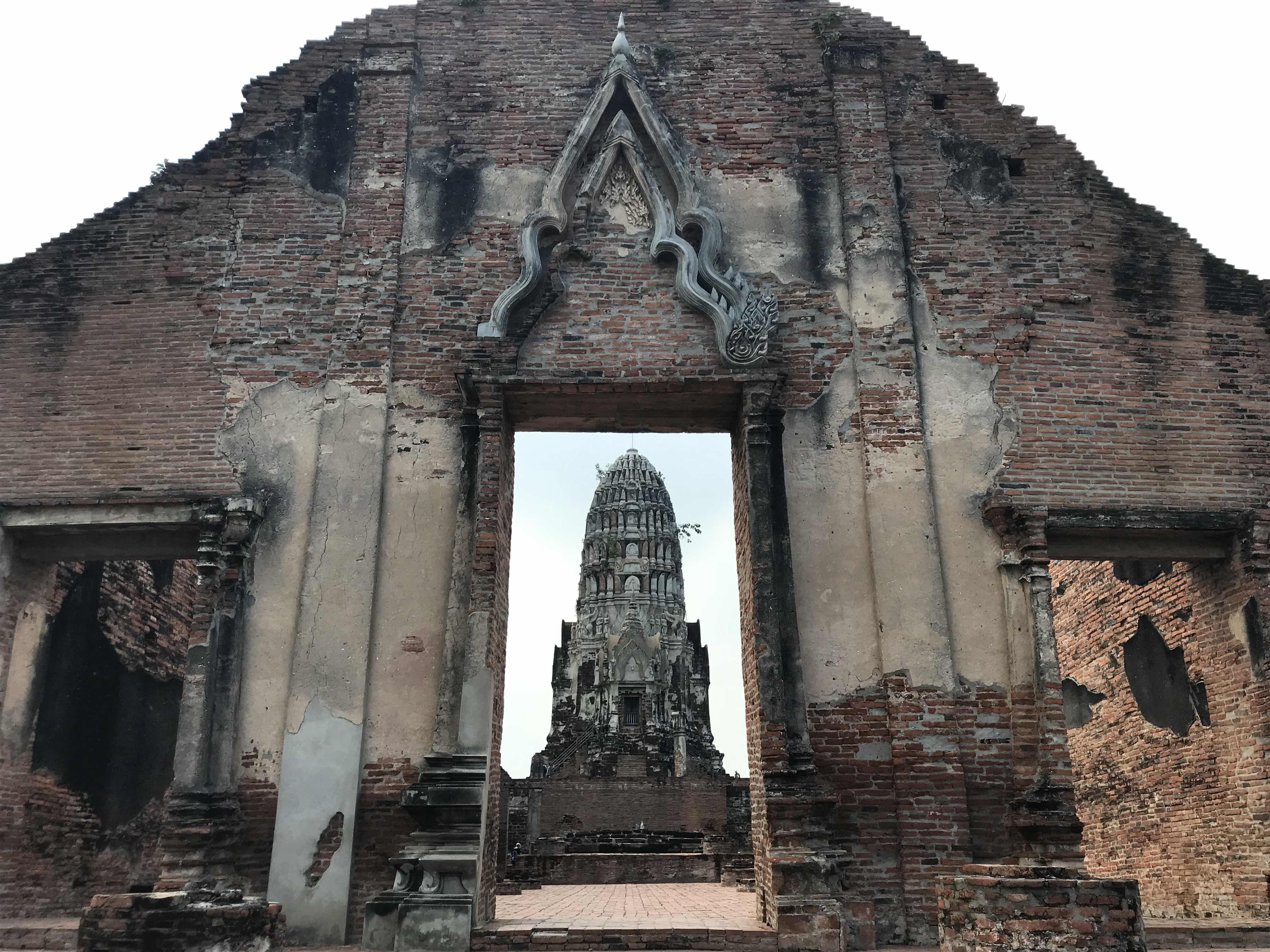 Right across the street from Wat Mahathat is Wat Ratchaburana, my next visit. This one is way larger than the first, with large stupas that were rather the worse for wear but still standing, even if some if them slanted worryingly to one side. The most impressive is the central prang (tower), which looks tall today, let alone back then. It seemed to be made of stone, so it has probably withstood the passage of time better than the clay bricks.
Having seen these two, I took the 15 min walk to the other side of the park, trying to stay in the shade as much as possible. I arrived at Wat Phra Si Sanphet, an enormous enclosure with lots of ruins; if you had an aerial view, I bet you could make out the entire layout of the ancient temple! Its distinguishing feature is the three enormous stupas aligned in the centre, which look practically intact, especially in comparison to the rest of the place. 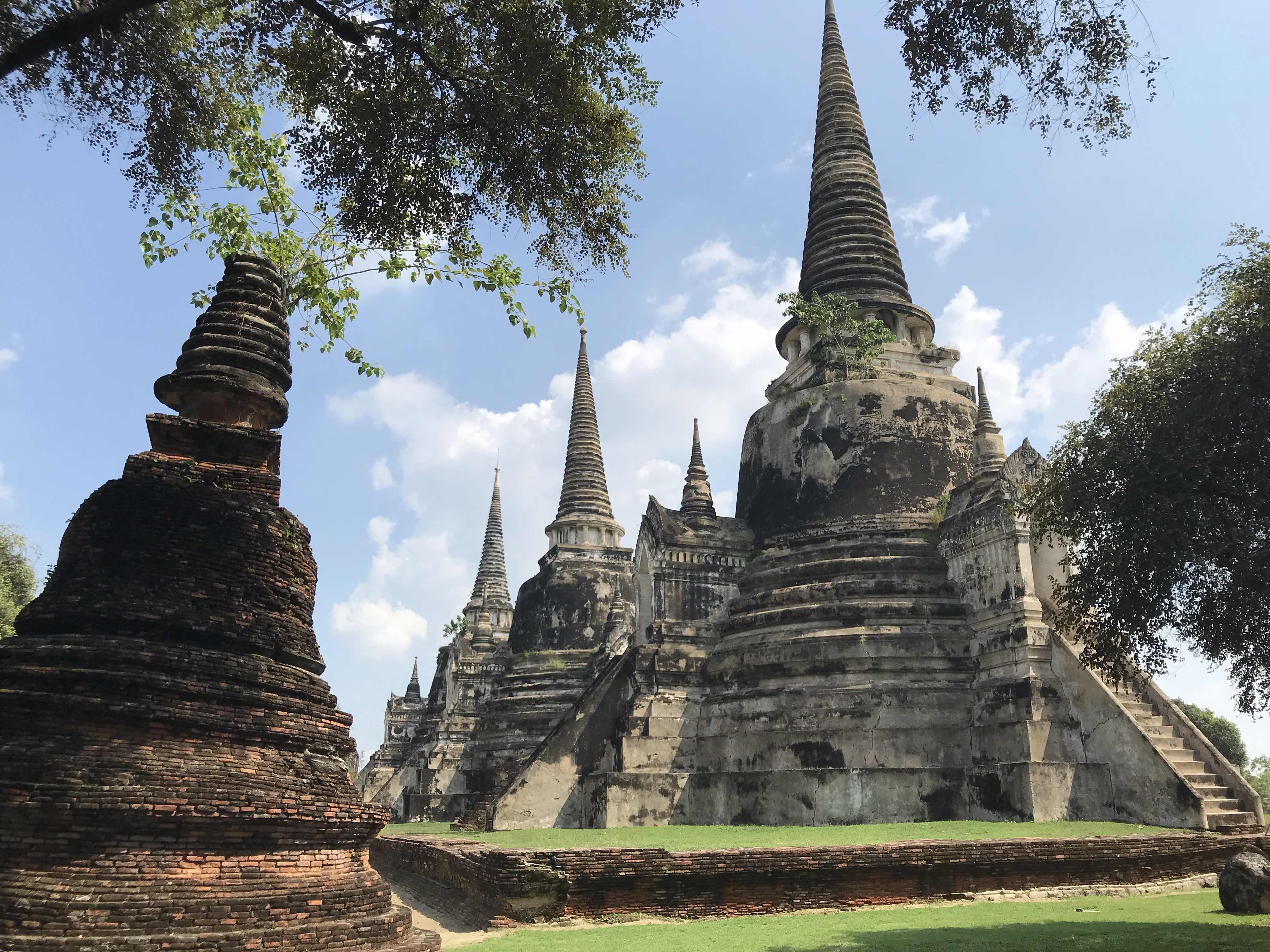 When I walked into the temple I discovered, aghast, that I was only a few seconds later than an entire school’s worth of schoolboys on a day trip: a literal hundred kids swarming the place! I practically ran through them to get to the other end of the temple so I could carry out my visit without being swept away. 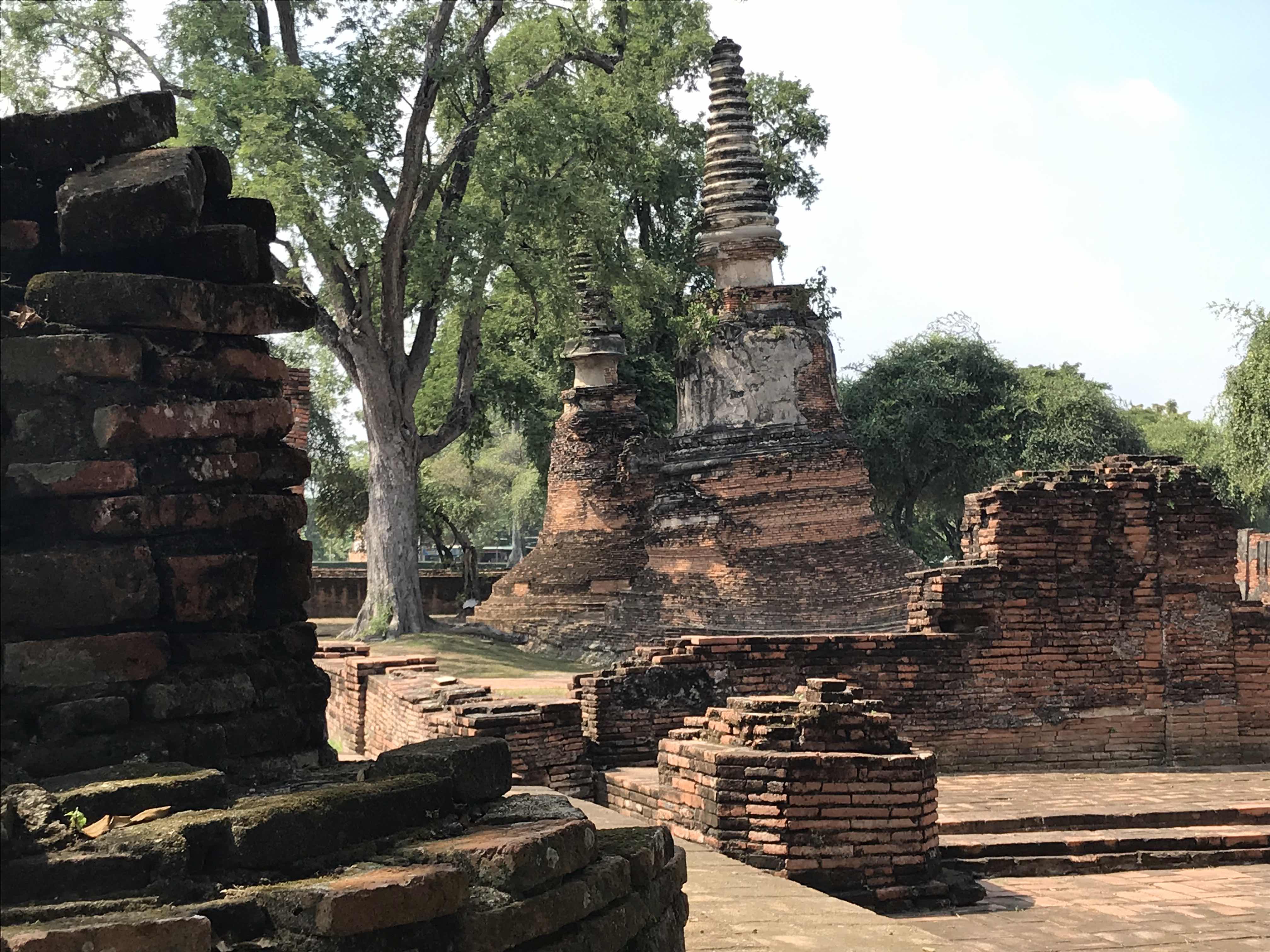 I didn’t linger very long in this one; the tsunami of children loomed on the horizon, the noon sun was oppressive, and even though this would be any archeologist’s dream there was only so much that I could glean from remains of walls, so I took my leave and crossed the street.
In stark contrast with all these other temples, I walked over to the nearby Wihan Phra Mongkhon Bophit. This is a large, brand new temple, built over an extinct sanctuary; its white walls and red roof stand out in the otherwise agrestic Ayutthaya reserve. It houses a positively gigantic Buddha statue, painted golden. It also has a row of much welcome fans inside, so I took the chance to rest and freshen up for a few minutes before I made my way back. 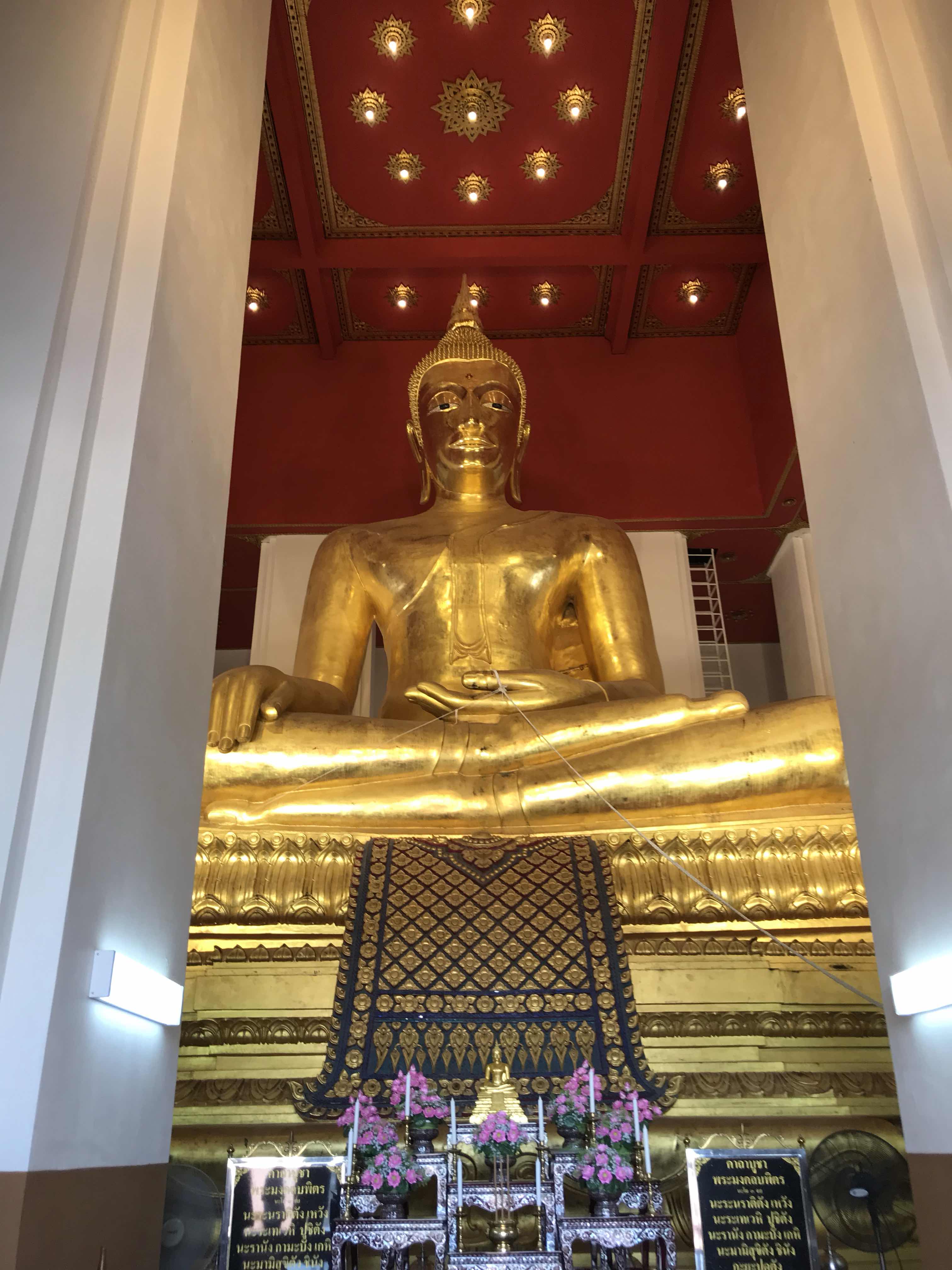 Eventually I retraced my steps to get back to the new town, and had lunch at the literal only restaurant I found that was A) open, and B) indoors whereI could sit. It turned out to be a Thai reimagining of a creperie, if you can believe it. I ordered a ham and cheese crepe, which… I ate, wishing I could them that we use a different mix for sweet or savory crepes.
After a quick lunch, I walked right past the minivan station, thinking it was somewhere in the Chao Phrom market, which it’s not -I had to backtrack yet again to discover that what everybody referred to as “the station” was just three minivans parked under a tarp. I just paid the driver 60 THB and he ushered me into the van. We only had to wait for a couple more people to fill the van, then it was back to Bangkok, and another cab to my hotel!
I only came out for dinner, to a place not far from here called Seb’s bar. It’s a Westernized place, but I ordered a Panang curry that was delicious, and spicy enough to make me cry! It’s right across from a place called Bangkok Poutine, a Thai-Canadian restaurant, and while I was certainly intrigued I don’t quite feel like having fries with gravy right now! That’s food for places with a winter!
I’m taking off to Chiang Rai tomorrow, but I’ll come back to Bangkok for one last night before the end of my holidays, so this isn’t goodbye yet!