Bangkok is mine for the taking! So this morning I seized the day by going temple-hopping. I took a Grab (Thai Uber) ride from my hotel to central Bangkok, which cost me just 90 baht (€2.4), so I’m already doing better than yesterday!

My first stop was Wat Pho, the famous temple of the Reclining Buddha, which you’ve undoubtedly seen in dozens of pictures. It was built in the 16th century, renovated in the 18th, which makes it one of Bangkok’s oldest.
I got dropped off right at the door, where they charge 100 THB (€2.7) for a ticket. In what I would later find is a bit of a common theme in Thai temples and complexes, once you hand in your ticket and get in, you’re pretty much on your own, with precious few maps or indications as to where to go. I didn’t much mind, though, because I found myself surrounded by gorgeous architecture everywhere I looked. 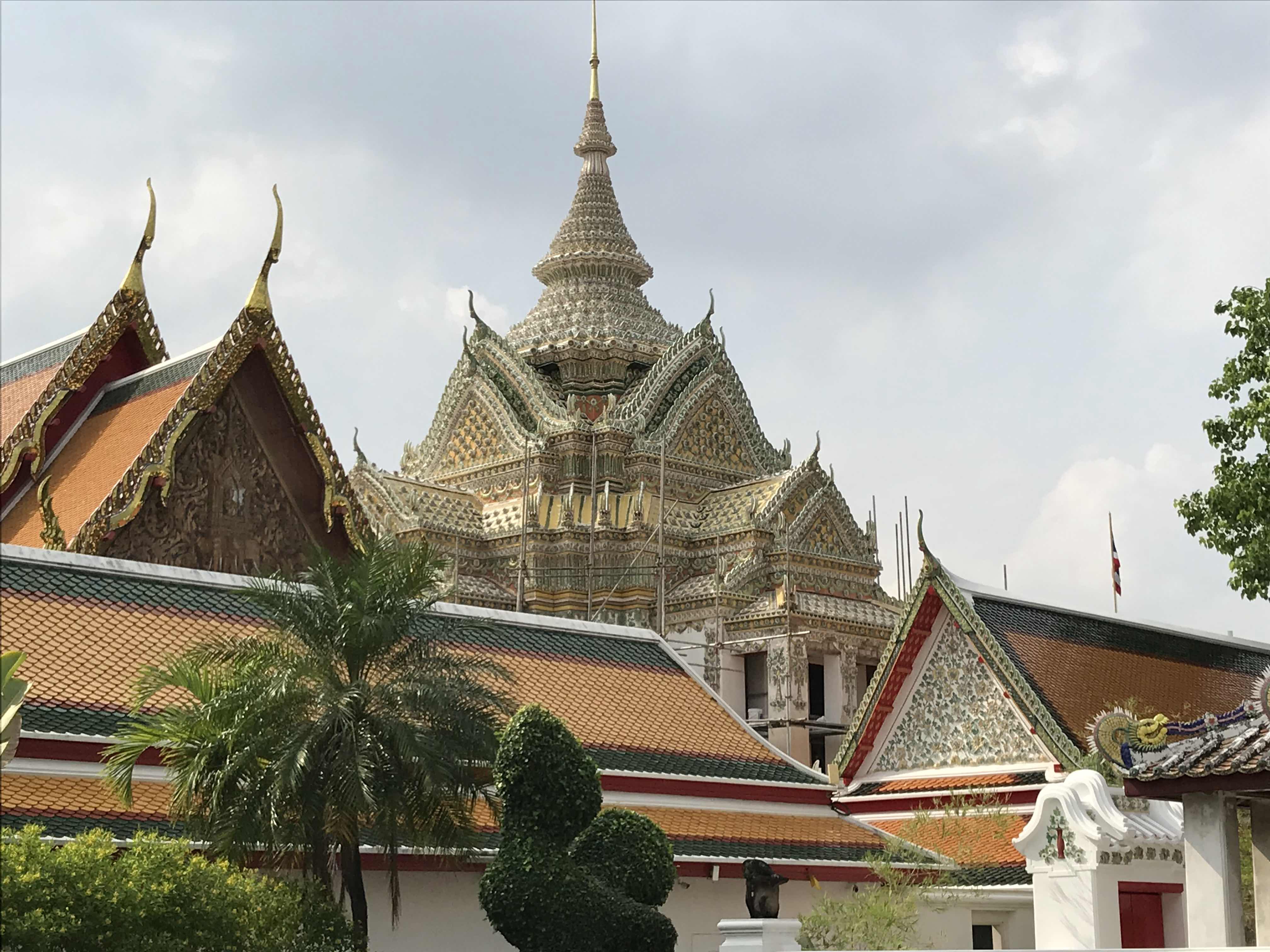 All the walls and buildings are topped by sharply inclined roofs that end in little horns, and they’re all tiled with beautiful reds, greens and oranges, and shiny reflective golden tiles that quite literally sparkle when the sun shines. I had no idea where the Buddha was because all the buildings seemed equally grandiose, so I just started exploring until I ran into it. Here too they had signs that said “Buddha is not for decoration – Respect is common sense”, so it looks like it’s a touchy subject all around.
Having found the Buddha’s pavilion, I took my shoes off at the entrance (they give you a bag so you can carry them around) -remember to pack slip-on shoes for your trips to Asia!- and walked into the sumptuously painted hall. The Reclining Buddha is way bigger than I imagined, at an impressive 46 m long. It’s a pity that its size is difficult to appreciate fully because it’s packed tight inside a hall with columns all around it, but it’s certainly imposing to see it tower above you like that. It’s all painted gold, and the soles of his feet have intricate mother-of-pearl inlays. There are a couple of spots from where you can get a glimpse of the entire statue at once. 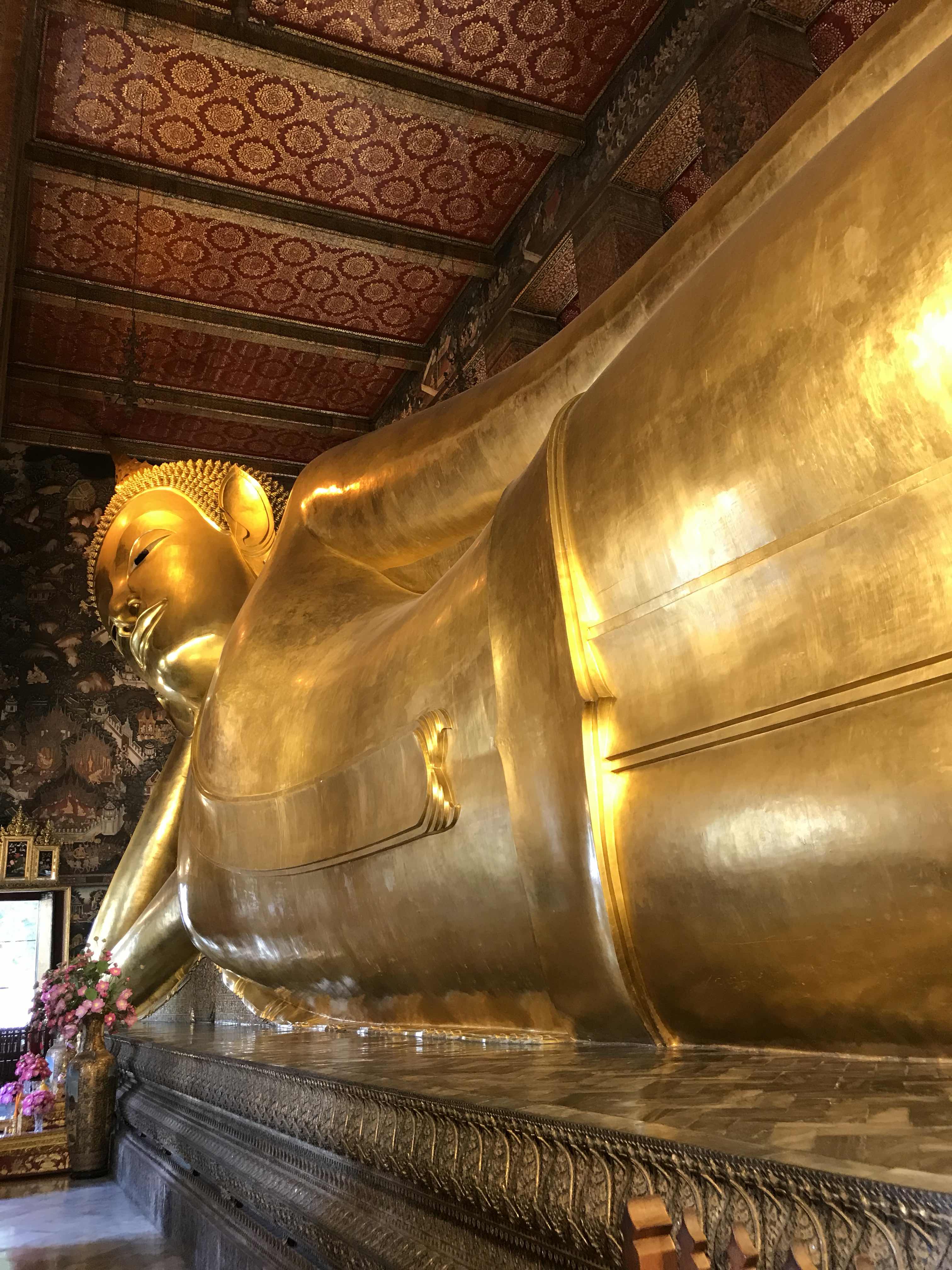 I still had a couple of other buildings to store, including another shrine with a (smaller!) golden Buddha. Unlike the previous one, this hall was mainly for the faithful to pray, although tourists are welcome to observe from a respectful distance. There are also several large spires covered in differently colored tiles; it’s very difficult to fit them into frame properly, but they are a sight to behold! 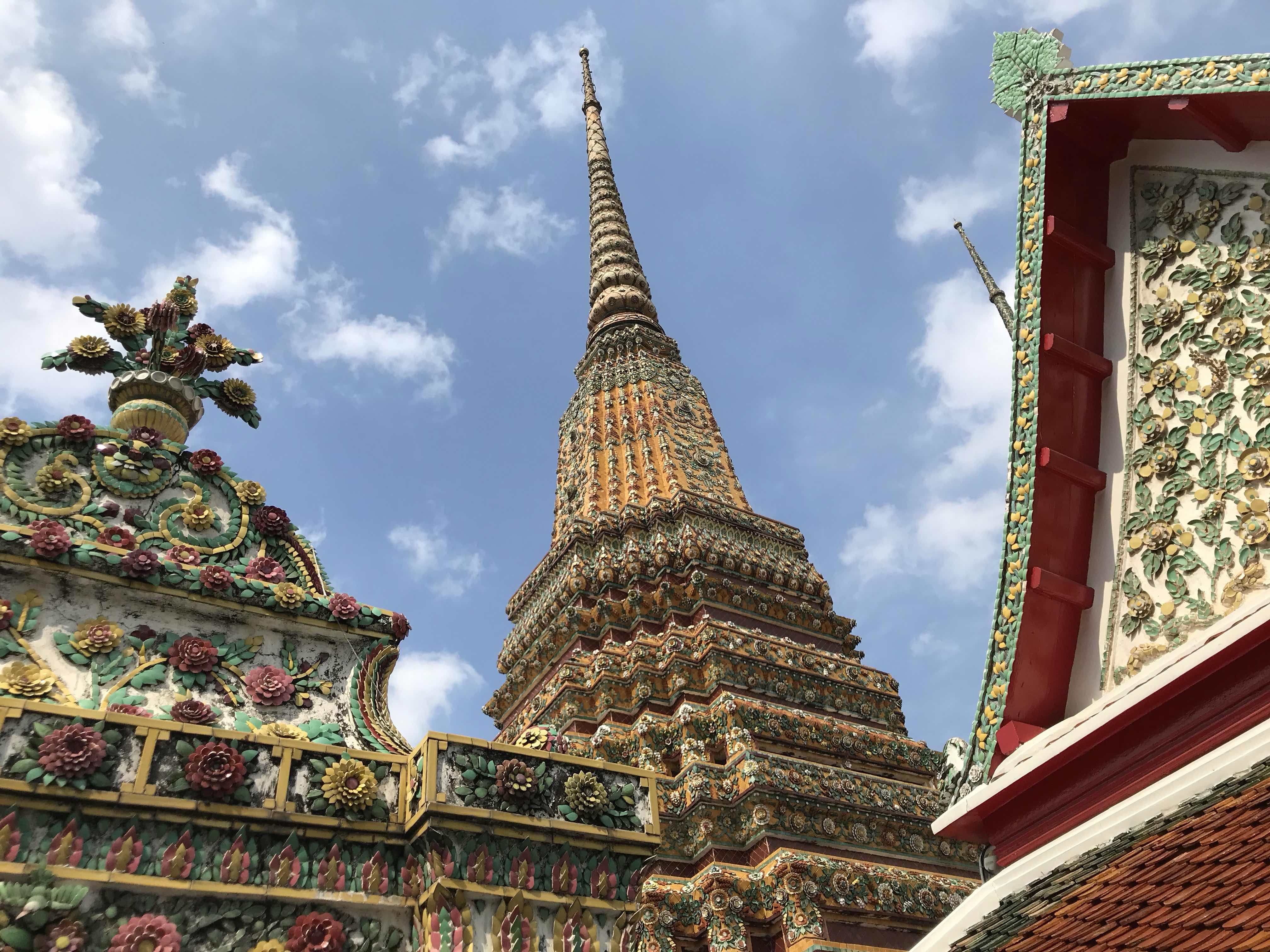 Coming out of Wat Pho, I set on for Wat Phra Keo, or the Temple of the Emerald Buddha, which shared the grounds with the Royal Palace. I was annoyed to discover that, even though it’s literally across the street from Wat Pho, the entrance is aaaaallll the way on the other side of the grounds so I had quite the walk from one to the other. When I did get there, I discovered to my horror that it was overtaken with people, and they charge 500 THB (€13.5) a ticket, which is highway robbery when compared to other sites here. Still, I made my way inside, and found that although it was indeed packed with very noisy, very pushy package tourists, it wasn’t all that bad in practice: because there were so many large organized groups of Chinese tourists, often it looked as though there was a massive queue at a gate or an entrance, but on approach it was just two dozen tourists listening to their guide and you could actually go through without issue.
Once again I found myself kind of lost at the beginning, but this place is better signalled, and the Emerald Buddha is housed on a very large and richly decorated pavilion so it’s hard to miss. Here too you have to take your shoes off, leave them on a rack, and then go into the temple -although you’l be coming out from a totally different place, so you better remembered on which side of the building you left your shoes because you’ll have to backtrack for them! 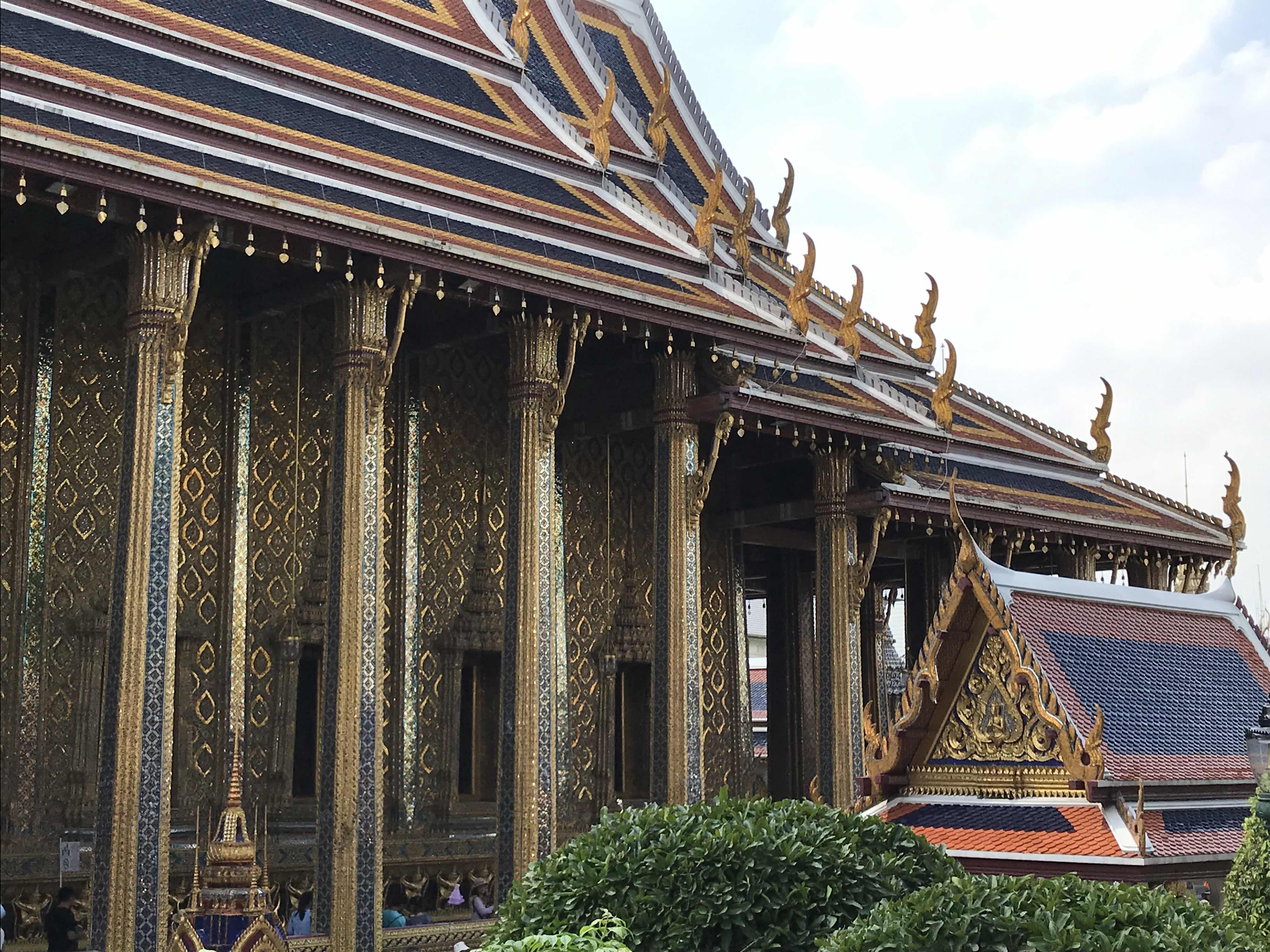 I have to say, the architecture of the place is more impressive than the Emerald Buddha, which is a small jade statue on top of an enormous golden altar. Maybe that’s why they don’t let you take pictures of it! Its significance lies in its antiquity (it’s estimated to be from the 15th century) and its status as one of Thailand’s national treasures. Indeed, there was a separate enclosure restricted to Thai worshippers only, so they could pray to it without being trampled by tourists.
As in Wat Pho, in Wat Phra Keo the Buddha is only one of the notable sights, others being a large golden spire or many smaller votive halls. Indeed, the way out took me through the Royal Palace grounds, and although none of the palace buildings are accessible, the roofs alone are striking.

My next mission was to visit Wat Arun, which is in fact close by if not for the fact that it’s on the other side of the Chao Phraya river. This hurdle is easily solved: it’s only a short walk from the Royal Palace to Tha Tian pier, where you can take a ferry for a mere four baht (not a typo: it amounts to just 10 cents) that crosses the river and drops you off literally at a side gate of Wat Arun. The ticket to the temple is 50 THB (€1.3).
Wat Arun, a Buddhist temple built for an Hindu god (I’m unclear on how the two religions timeshare their temples around here, but it seems at least similar to Buddhism and Shinto in Japan) around the 17th century. It’s remarkable for its giant central tower, which along with its location next to the river makes it a Bangkok landmark. From the distance it looks white or gray, but up close I could see that every inch has been painstakingly covered in tile mosaic, often recreating floral patterns. These have been renovated recently, so it all looked brand new. 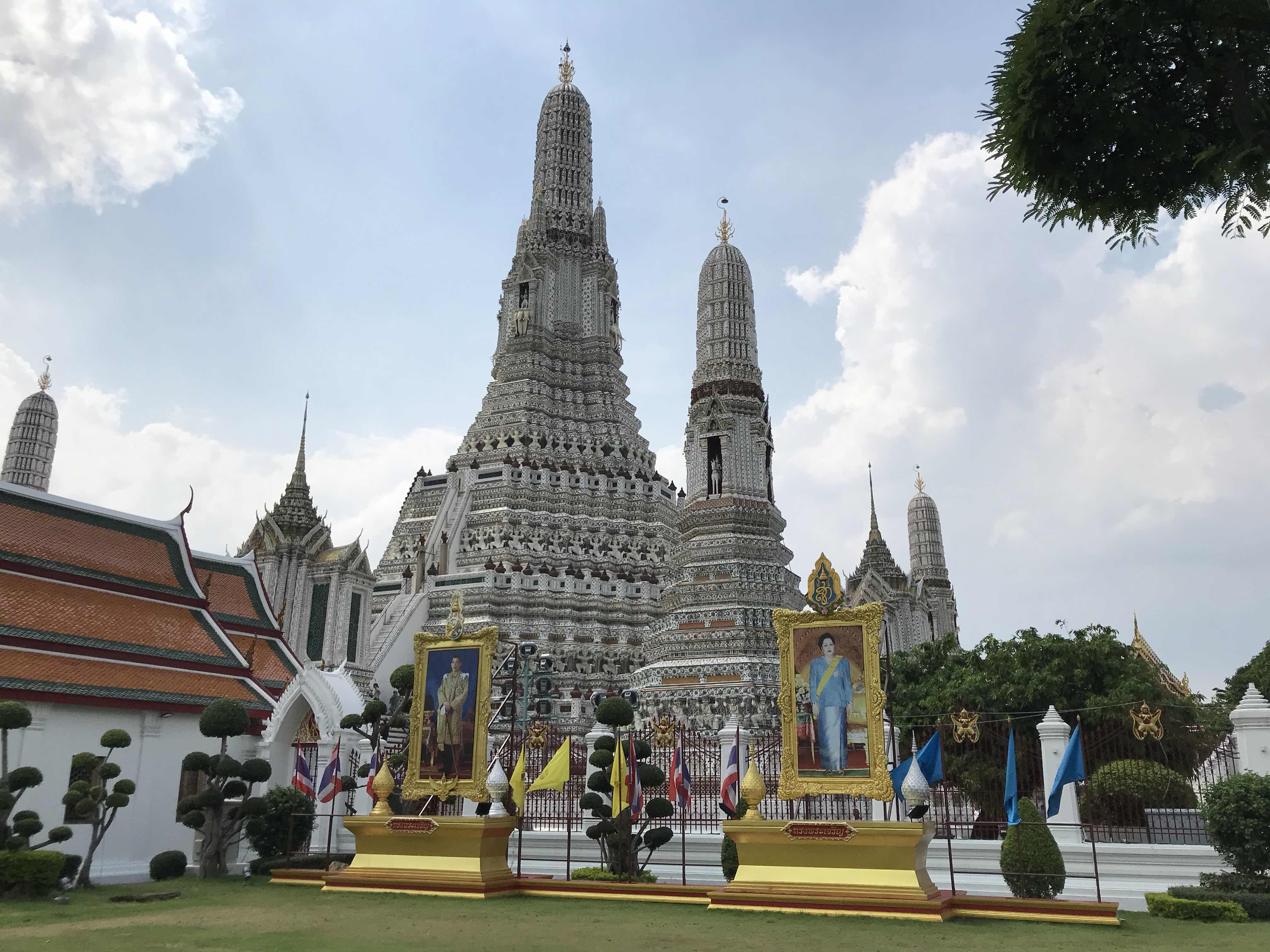 By the time I was done, it was lunchtime, I was exhausted, and even though in general it wasn’t as hot as yesterday (meaning it was “only” 28°C in the shade rather than 33), it still got pretty hot when the sun parted the clouds, so in a stroke of clarity instead of taking the ferry back to the opposite shore I got on a tourist boat that for another 50 THB took me all the way upriver to a pier not far from my hotel. Genius! I had a delicious green curry at a place called Tham Na and walked the rest of the way to the hotel to put up my feet and write this post while I think about what to do with my afternoon.
All right, so here’s the deal: there are more temples to see, but I already hit my quota for the day, so what I did was to take a cab to the Jim Thompson House. Anybody who’s been reading this blog already knows that I’m a sucker for house museums, and this one was right up my alley! Turns out Jim Thompson was an American silk magnate who moved to Bangkok and built an estate by buying six different traditional Thai houses, from different regions, and having them dismounted and reassembled on his land. The result is a gorgeous, forested mix of Thai architecture and Western style. 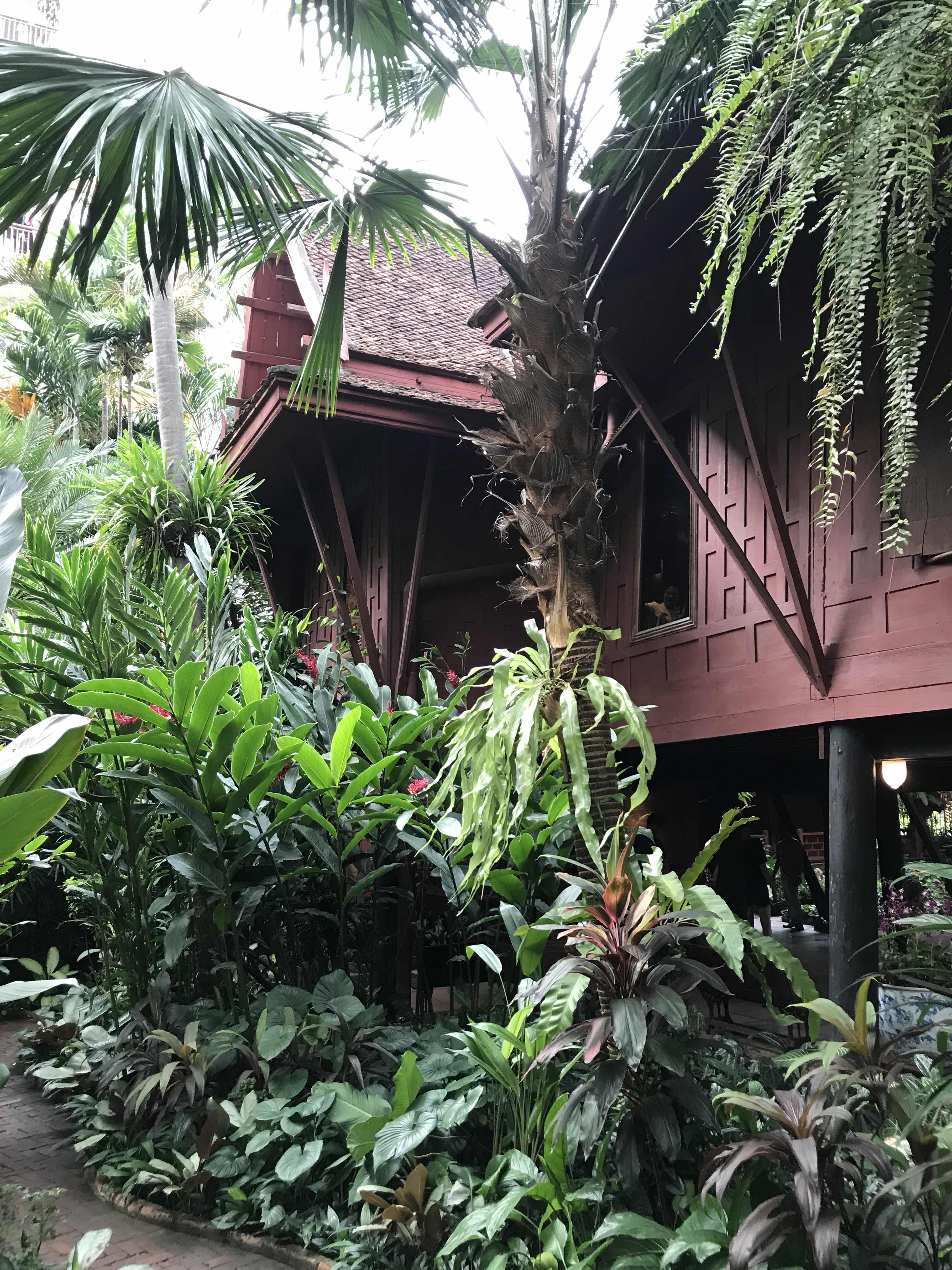 You have to join a tour in order to see the inside of the house, and it annoys me when house museums do that, but in fairness the tour was pretty good and they let you roam the gardens at your leisure. There’s lots of plants, trees and winding paths everywhere, so it feels way larger than it probably is, and the rooms are diaphanous and open to the different gardens and courtyards, so it always feels like you’re in the jungle. All the furniture and furnishings are real, traditional Thai objects, but arranged to fit Thompson’s Western lifestyle: for example, he had a dining room, which does not traditionally exist in Thai homes, so he furnished his with antique mahjong tables.
The house if filled with ancient statues and paintings, the newest of which is two hundred years old, the oldest a couple of Buddha statues that according to our guide are at least 1,300 years old. The houses are entirely made of wood, painted red on the outside but left its natural color inside, which gives everything a peculiar look. A beautiful house: I fell in love with the enormous living room, with an entire wall open to the lush garden! I mean look at it: 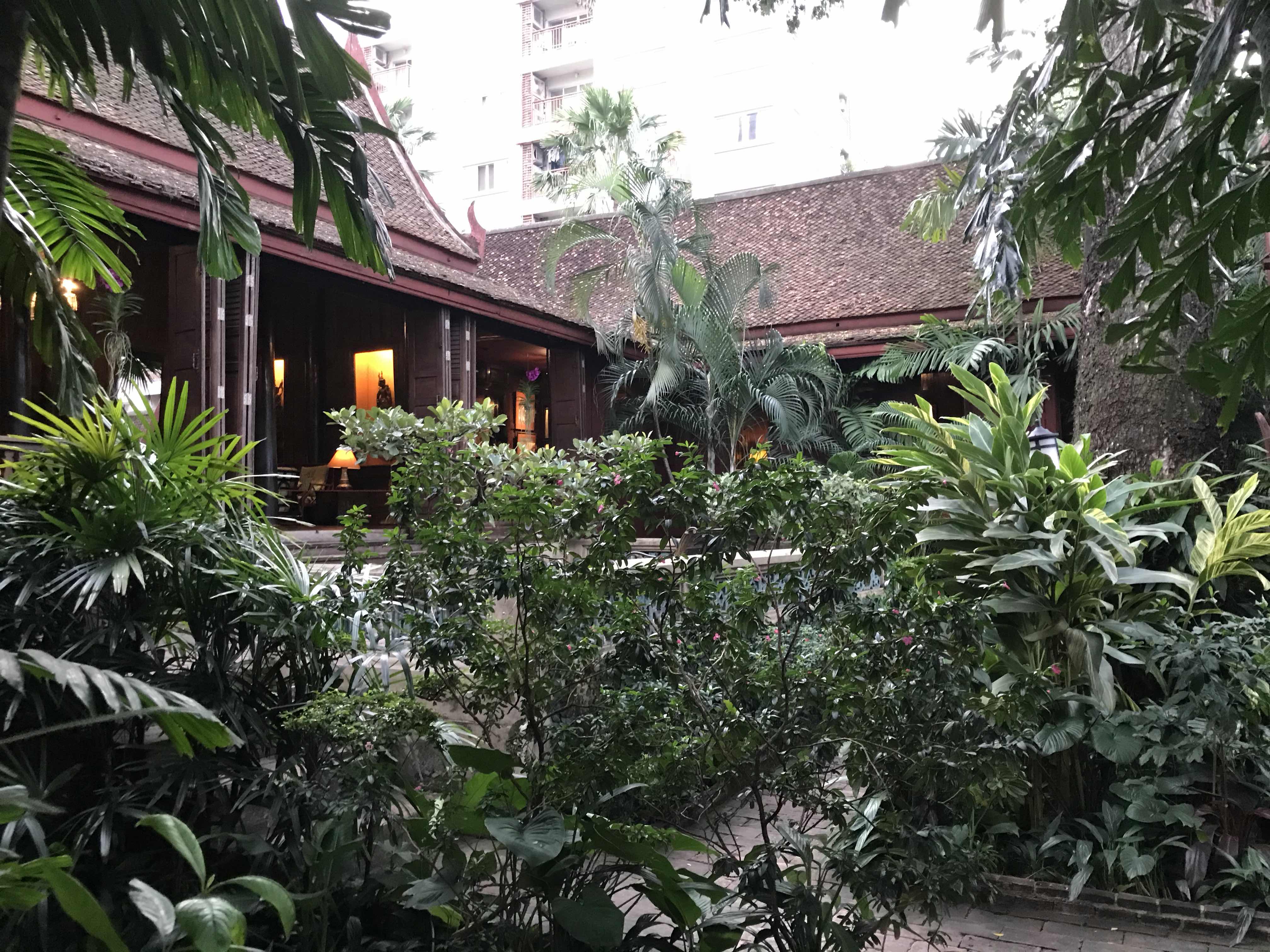 To finish off the day, I found myself really missing the pool dip at the end of a hot day, and since my hotel doesn’t have one, I went looking for one! I took the BTS (the elevated train) further east, which was an experience in and of itself: it crosses the business district, so everyone in it was well dressed, and in long sleeves no less; if it’s 30°C every day of the year, what are you gonna do? Never wear a shirt to work? They probably don’t spend much time outside of air-conditioned environments!
I made my way to Yunomori, a true Japanese onsen in Bangkok. It’s true that hot baths are not one’s first choice in a hot city, but they also have cold baths and it was pure heaven to sink into the cool water until I got actually cold, then into the hot tub, then back for more. I am now all rested up for to tomorrow!