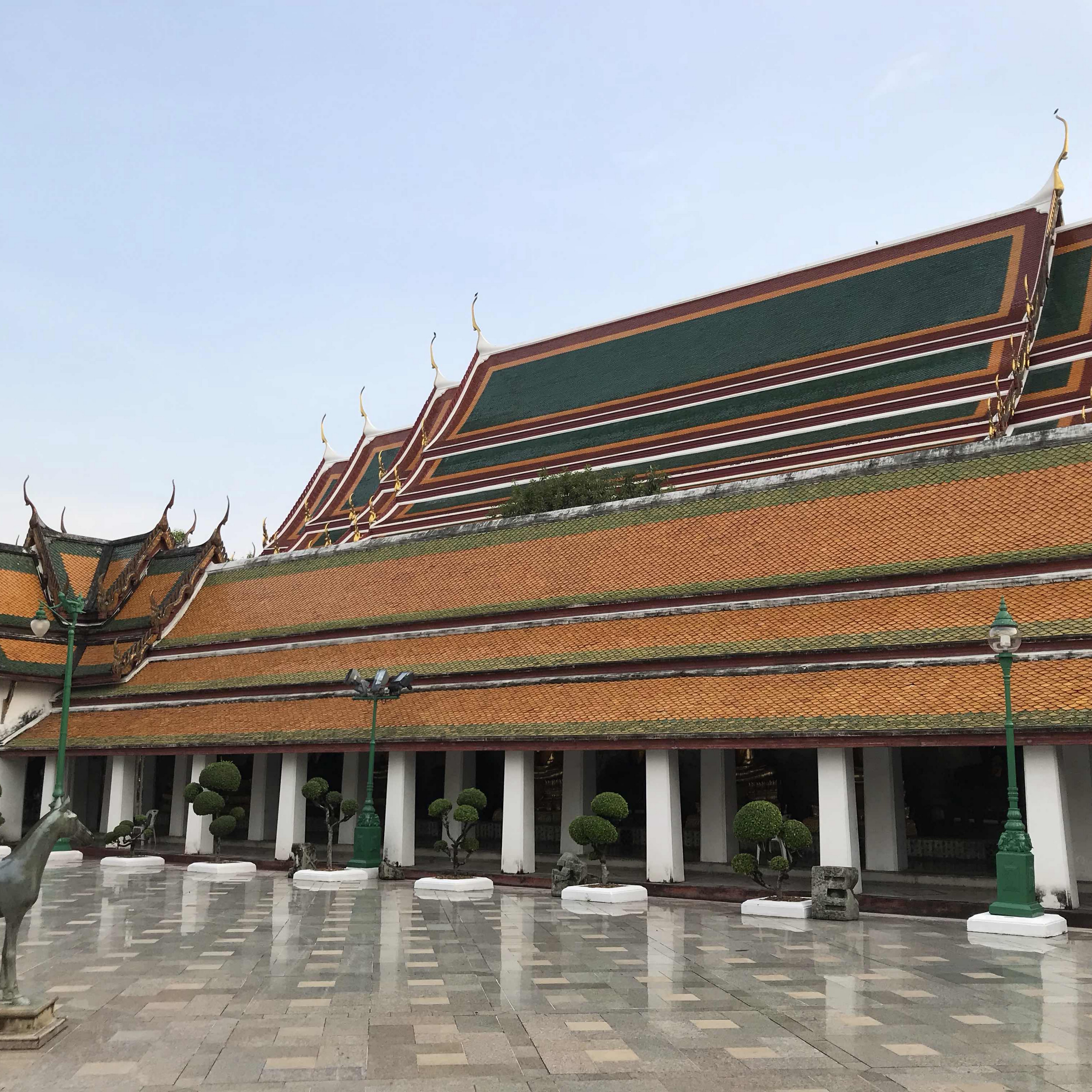 After a lazy morning at the hotel, today I left Siem Reap on a short, one-hour flight to Bangkok. This officially kicks off the Thailand section of my Thailand trip!

Upon arrival in Suvarnabhumi airport, the first thing I did was to withdraw baht from an ATM, and then look for a taxi. There’s a million touts and car desks in the airport, so I’d studied where to find a regular taxi beforehand so as not to get lost: what you have to do is go to Level 1 (when you walk out of the arrivals gate it looks like you’re on ground level, but you’re actually on Level 2), get out onto the street, then pick a ticket from a machine that tells you which parking spot to go to for your taxi. These are the official, regular metered taxis; unfortunately, I was so preoccupied with getting the right kind of taxi that I failed to notice that the driver did not actually use the meter, and so he ended up quoting me a price that now I know is way more expensive than it should’ve been! Ah well, we learn from our mistakes.
The trip from the airport to my hotel in Dusit took about 45 min, and on the way over Bangkok did not ingratiate itself to me: a cloud of yellowy smog covered the city, and all around us were large, ugly freeways coiled around large, ugly buildings. I did get one brief glimpse of the iconic MahaNakhon skyscraper, though! I want to get a better view of it!
I checked into the hotel, the consonant-laden Phranakorn Nornlen, which is understandably not the palatial suite I had in Siem Reap, but it’s very picturesque and colourful (plus it’s only like €45 a night, breakfast included). It was around 16:00, so I wanted to do something, but many of the main temples close between 15:30 and 17:00 so my options were limited. I discovered that Uber doesn’t work in Thailand, as they apparently merged with their main competitor, Grab, so if I want to use it I have to download the app and set up an account with them. I couldn’t be bothered right then and there so I set out to acquaint myself with Bangkok on foot!
My first impression was that Bangkok is more developed than Hanoi (definitely more than Siem Reap), on the same level as or above HCMC. There are streetlights and pedestrian crossings everywhere! And people actually follow them! Well, in the big roads, anyway; in the smaller ones red for cars and green for pedestrians means that you may choose to cross and cars may choose to stop, so up to you to roll the dice.
It’s a cliché, but it’s true that walking around Bangkok is an assault on the senses. Somebody’s cooking something in every corner, and sometimes it smells delicious, and sometimes it smells gross, the sound of traffic is everywhere, and there’s a million people going about their business. It’s very hot here, albeit differently than it was in Siem Reap: it’s cloudy, so it doesn’t burn and hurt like the Angkor sun, but it’s muggier, such that I started lightly sweating within minutes of walking out the door. I crossed lots of fellow Westerners everywhere I went. 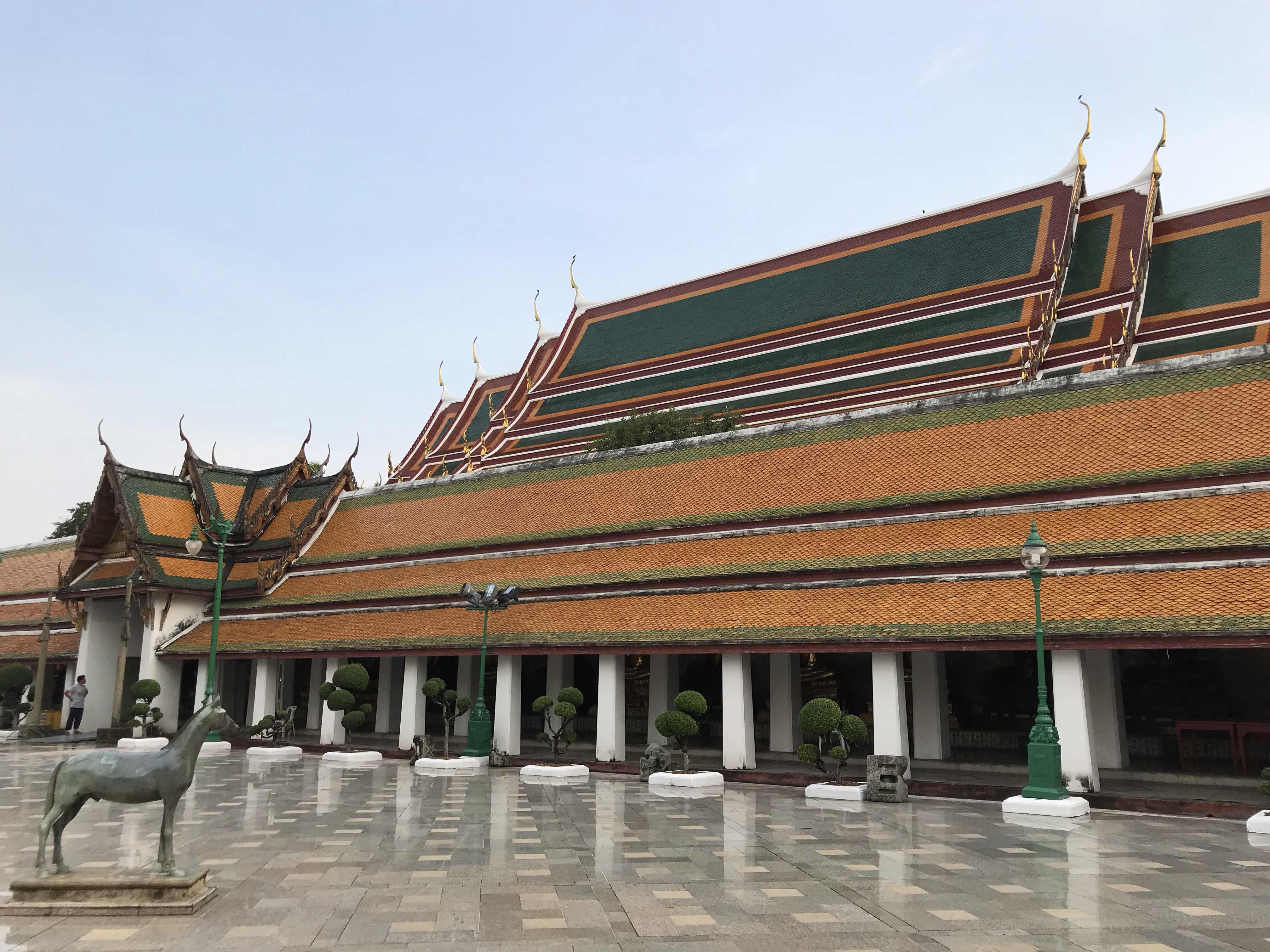 I eventually made it to Wat Suthat, built in the early 19th century, which is Bangkok’s highest-level temple, and one of only six to achieve that level in the country. As I approached I could see that the façade is undergoing renovations, but I was relieved to find that it was still open for visitors, for 100 THB ($3) a ticket. The temple follows a structure different from other Buddhist temples I’ve seen: as you enter, the first thing you encounter is the main building, which houses an enormous, golden Buddha statue. On the entrance there are large signs that remind visitors that IT IS WRONG to use Buddha’s likeness for home decoration or tattoos -I feel like that’s going to be an uphill battle. Interestingly, the walls of Buddha’s room were all painted, remarkably like traditional Russian cathedrals. 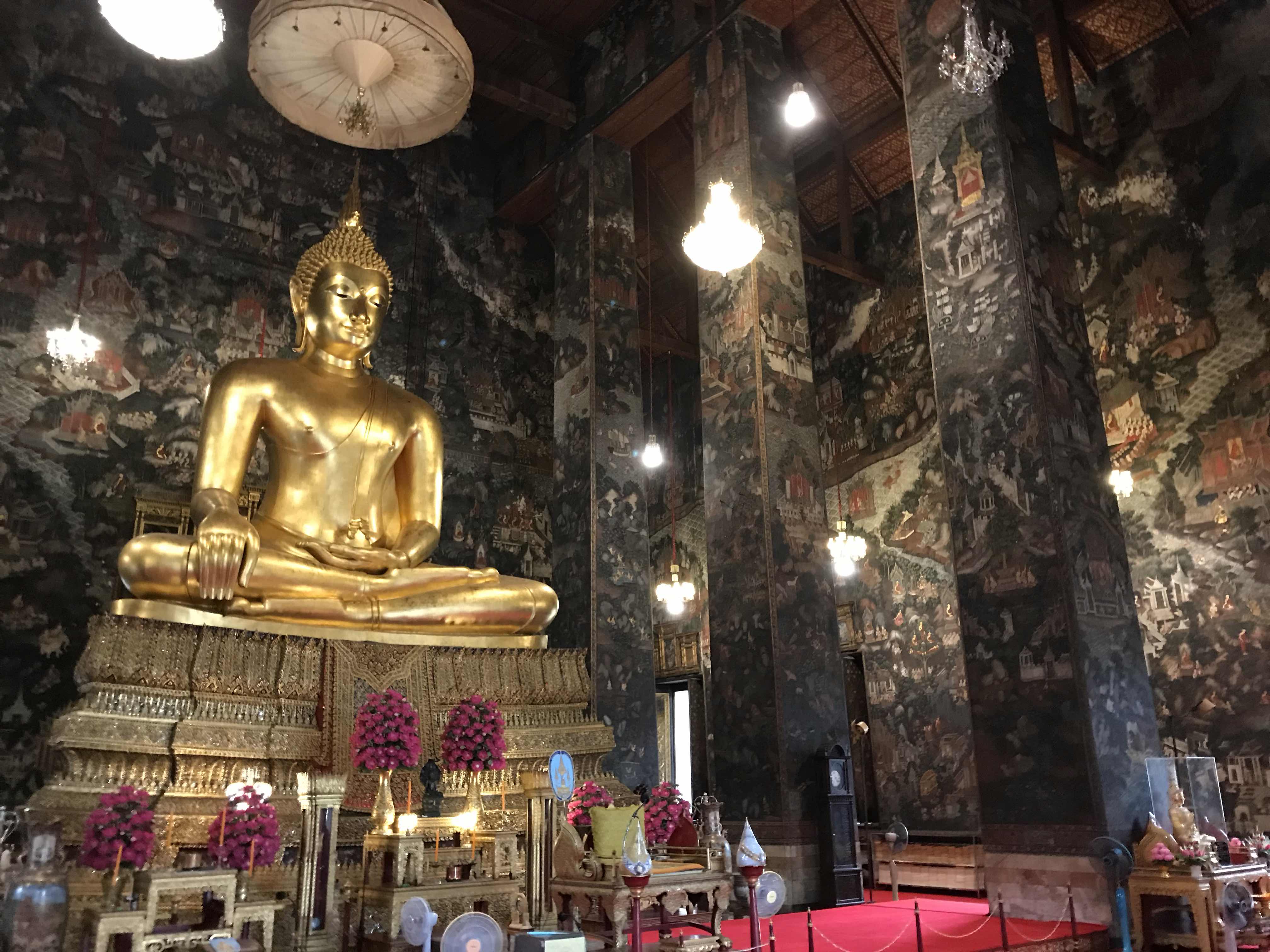 This main building is on a courtyard, with arcades on all sides sheltering over a hundred smaller Buddha statues. Beyond this courtyard is a second one, where teenagers in orange robes seemed to be practicing mantras from books. The trees were all manicured to perfection, and there were odd statues that looked like white, bearded guardians. There was another building here with a large Buddha statue, although it was covered in scaffolding. 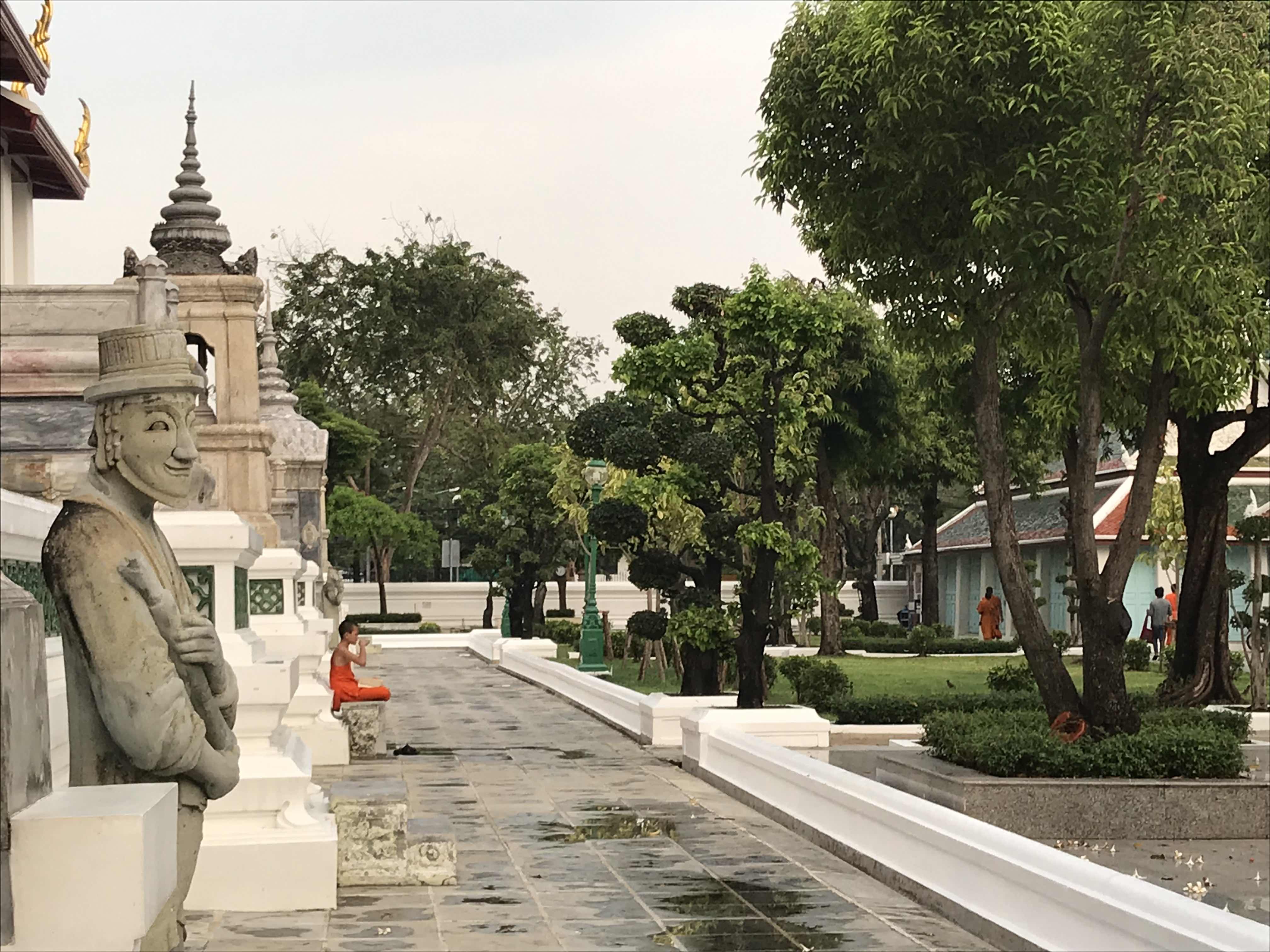 After doing the full tour of the temple, I began to make my way back to the hotel, but with a detour to walk along Khao San Road, Bangkok’s famous backpacker avenue. It apparently exploded with The Beach, becoming a tourist magnet filled with tacky souvenir stores and bars for foreigners. It’s a ghastly place but it’s kind of worth peeking just to see all the different kinds of travellers that make our way through Thailand: young backpackers, tour groups, New Age hippies and grunge guys, well-to-do retirees, families, honeymooners… I walked the length of the street, snapped a couple of pictures, and hightailed it out of there! 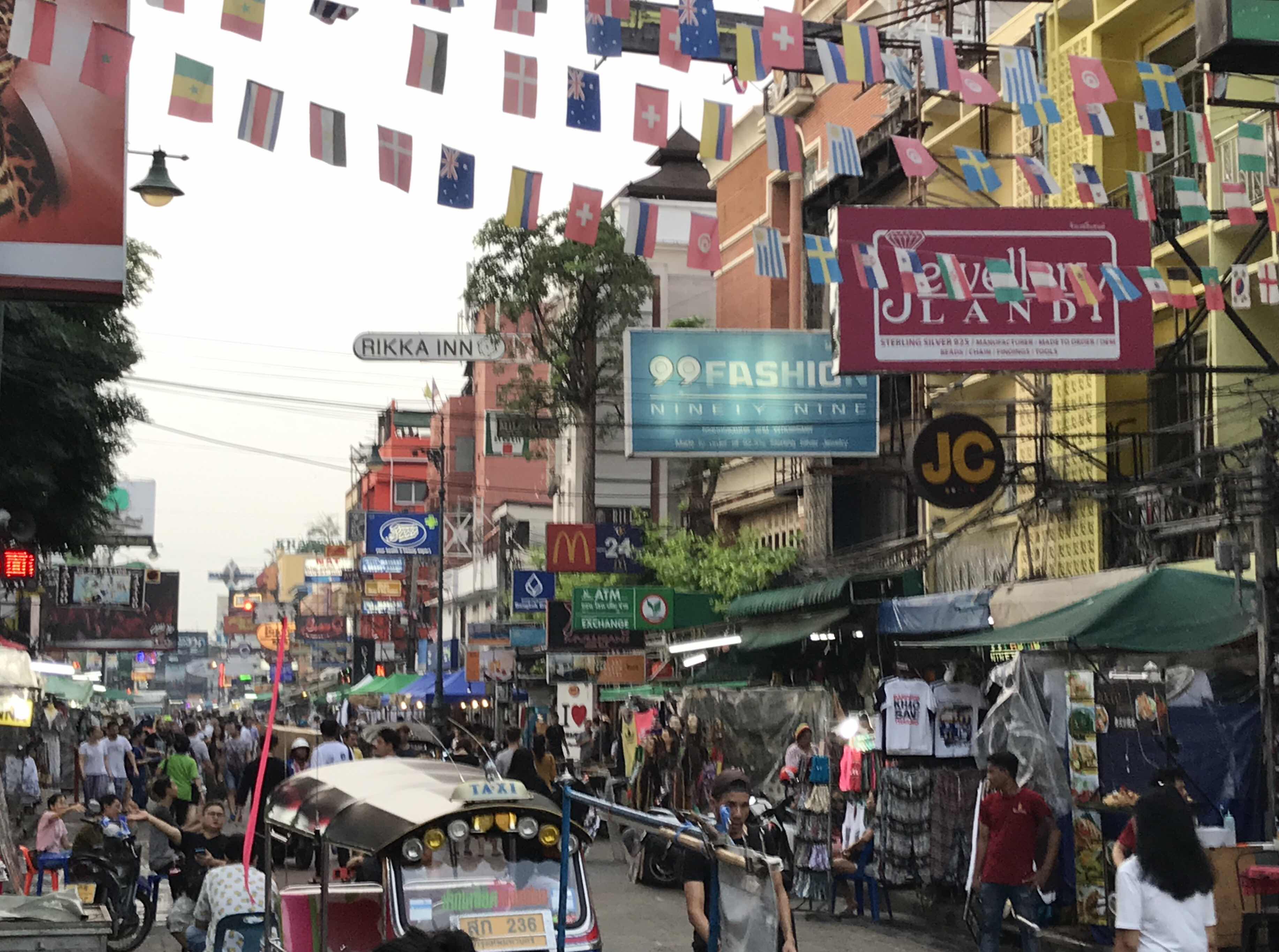 Rather than looking for dinner -it was early- I stopped for a pick-me-up at a coffee shop. I wanted to rest from the heat a bit, but they overcompensated in this place by cranking the air conditioning up to Narnia levels, so I didn’t dwell long. I picked up something to eat in my room later to save me a trip *taps forehead*.

Tomorrow I will have all day for proper sightseeing, but already I could get a good taste of the hectic, vibrant Bangkok life. Let’s see how it goes!