Today I was booked for a second tour of Angkor. Since yesterday I got to visit the main central temples, this time I went on the bigger circuit, which includes smaller temples further away from the center.

The driver took me first to Banteay Srei, which is the farthest away. It took us an hour to drive the 37 km from my hotel in Siem Reap to the temple, but it was pleasant enough: these roads weren’t dusty and the drive created a breeze. Most of the drive went through interior roads, where no English signs or tourist fare could be found. A lot of the houses here were built on stilts, which made me wonder if this area gets flooded in the rainy season. I also found the answer to a mystery: in every road here and there I’d seen roadside stands with rows of bottles holding a liquid that looked like dishwater. It didn’t look appetizing to begin with and it sat in the sun all day, so I couldn’t imagine it being a drink. Finally, today my driver stopped at one of these stands, got two bottles, took out a fennel… and poured them into the motorbike’s deposit. It’s fuel! 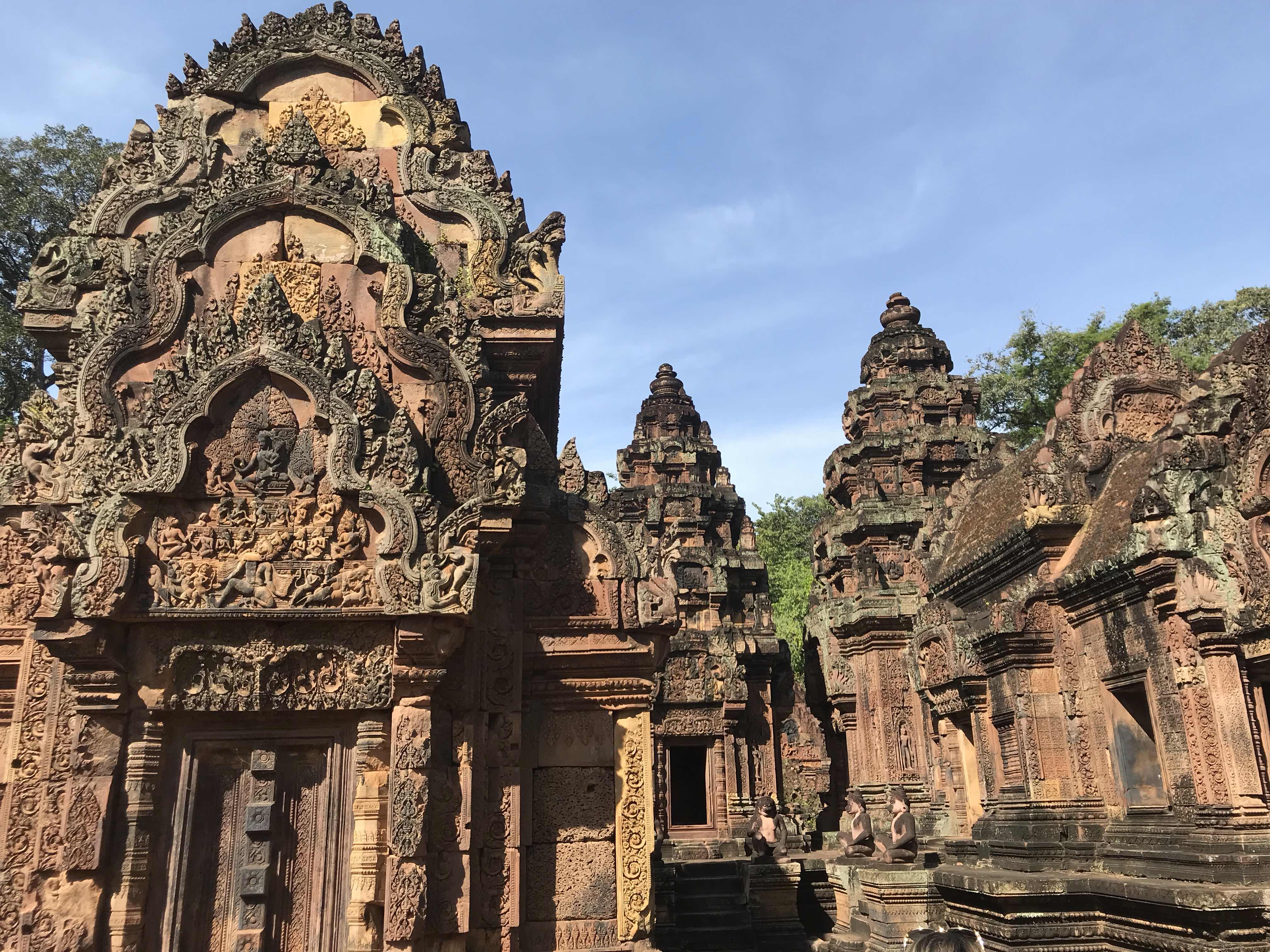 We made it to Banteay Srei at around 9:15 and it was already pretty busy; difficult to get pictures without random people in them, but otherwise not bothersome. I could see straight away why the guidebooks recommend making the trip out here: this temple isn’t quite like any of the others. This one is also built on ground level, instead of as a man-made hill, on a rose-colored stoned that made everything have a distinctive tint, and every surface is covered in exquisite carvings. 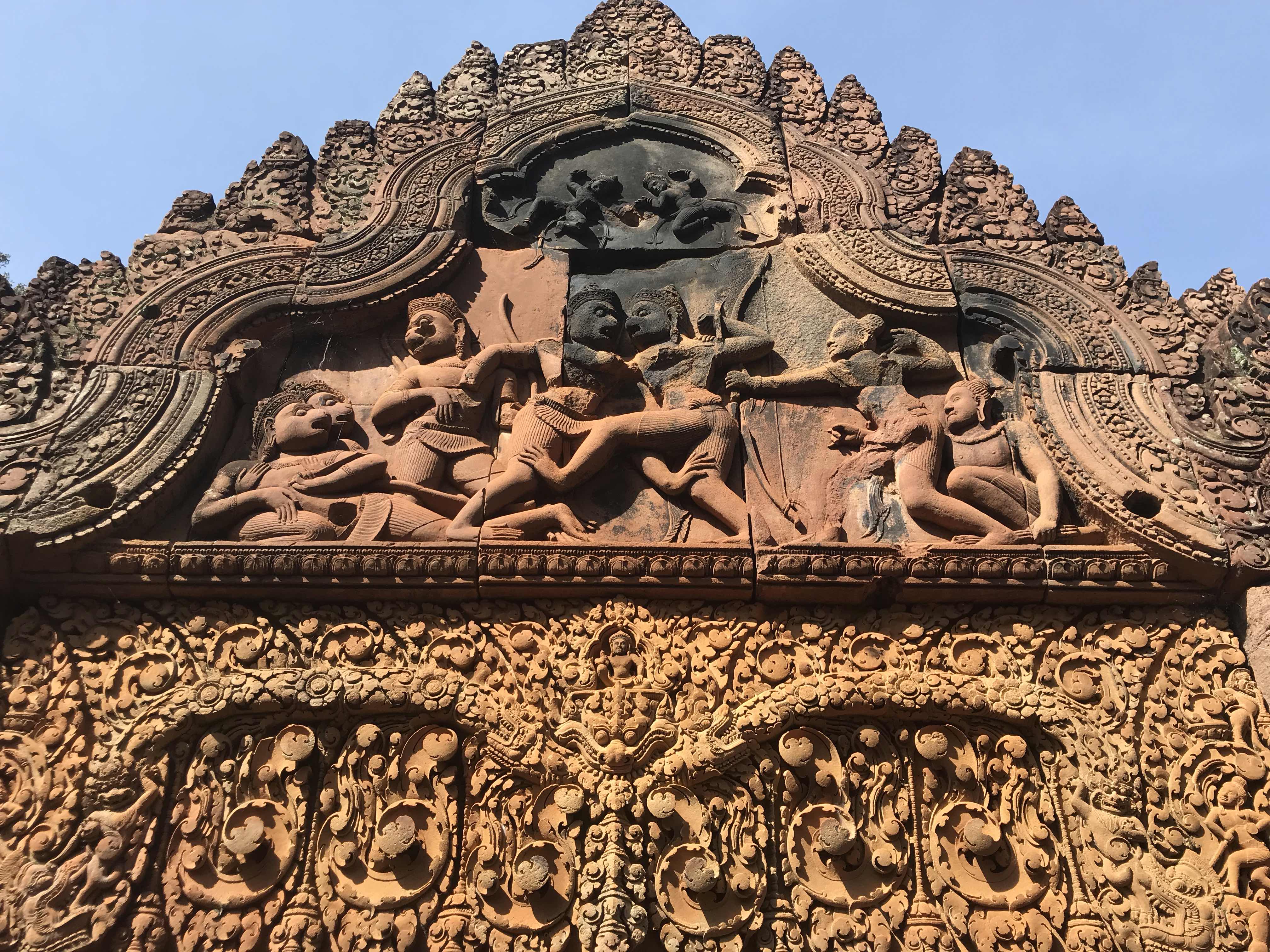 The Khmer architecture dates back to the 10th century; it blows my mind that all these beautiful bas-reliefs have survived for a thousand years. Much of the walls have crumbled, but in the center there are halls and monkey statues that are well conserved. This is a Hindu temple, dedicated to Shiva, the destroyer and creator of the world.

It’s not a very large temple and it takes a while to get there and back, so you should definitely make sure you see the central temples first, but if you have then it’s worth the detour for the delicate art alone. On the way back from Banteay Srei we stopped at Mebon, another one of the mountain-like temples. At the top there are several impressive spires similar to the ones in Angkor Wat. This place is also large, square and perfectly symmetrical, so I had to try every gate until I figured out which one I came from! They are all designed to look exactly the same! If you come visit, you should consider dropping breadcrumbs as you walk around! 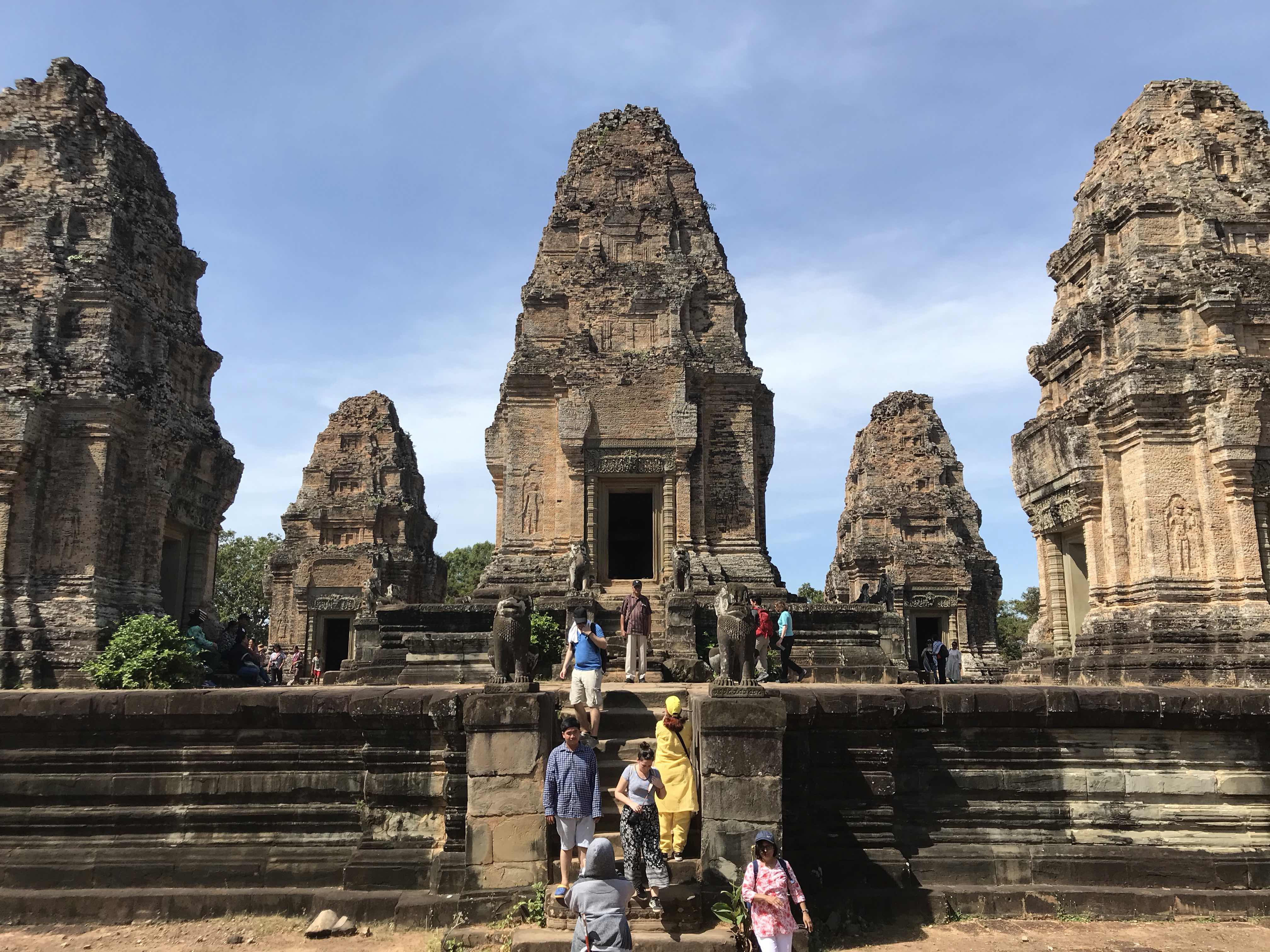 Next stop was Ta Som, another ground-level temple. This one also had beautiful engravings, but the real treat comes as a reward for those of us who make our way all the way to the other end of the temple and come out on the other side: if you go into a door under a smiling face, when you come out you see that an enormous tree surrounds the exit with its roots. 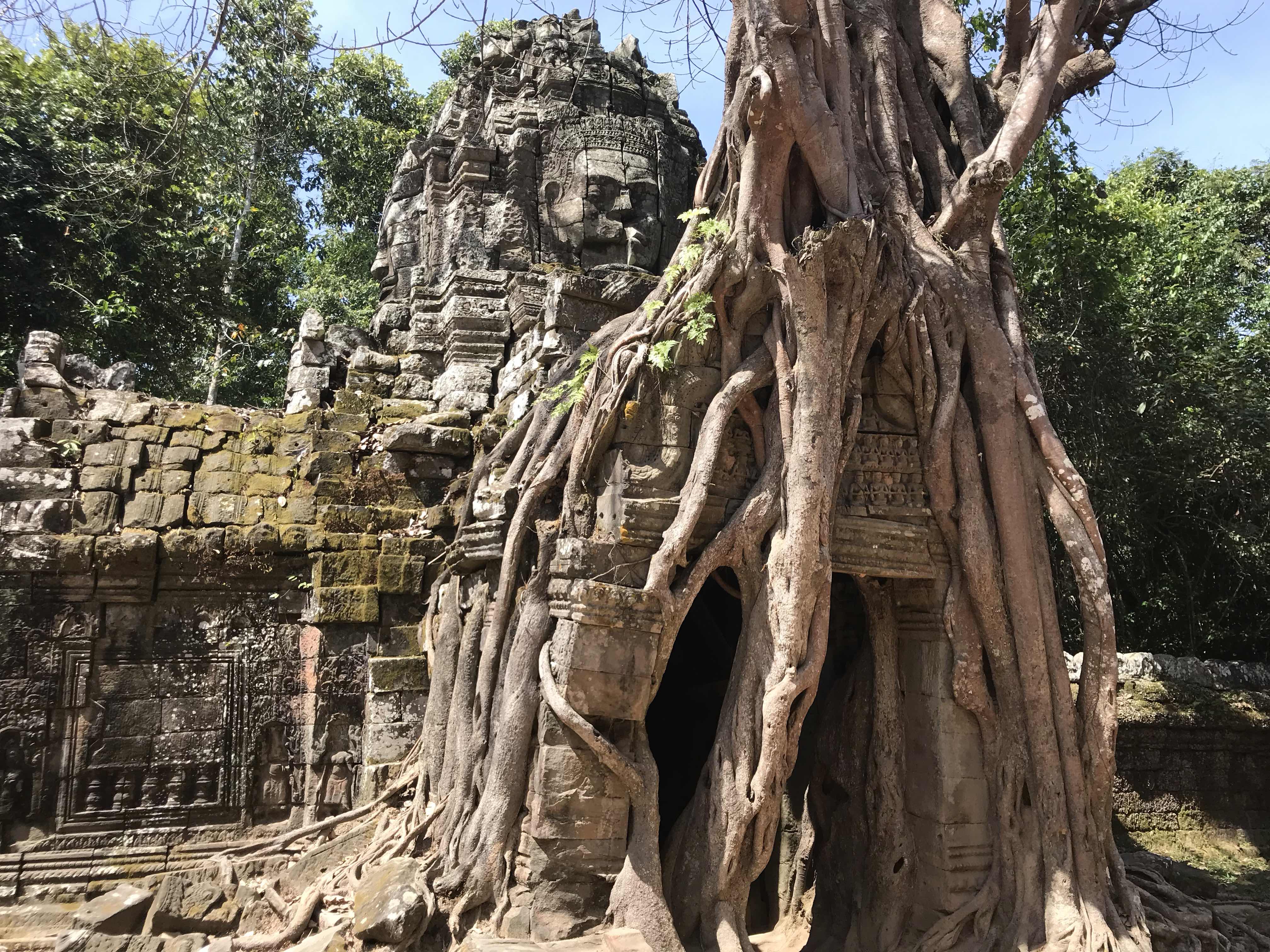 It wasn’t yet eleven but the sun was beaming down with a vengeance, so I had to weave in and out of the shadows and make calculated decisions as to when to step out of a refreshing shade for a prized photo opportunity. Everywhere there were small groups or even couples walking with their official tour guides, all Cambodians speaking in English, French, Japanese, Russian, German, Chinese, Spanish… All the guides for languages I could understand spoke flawlessly, with barely any accent. 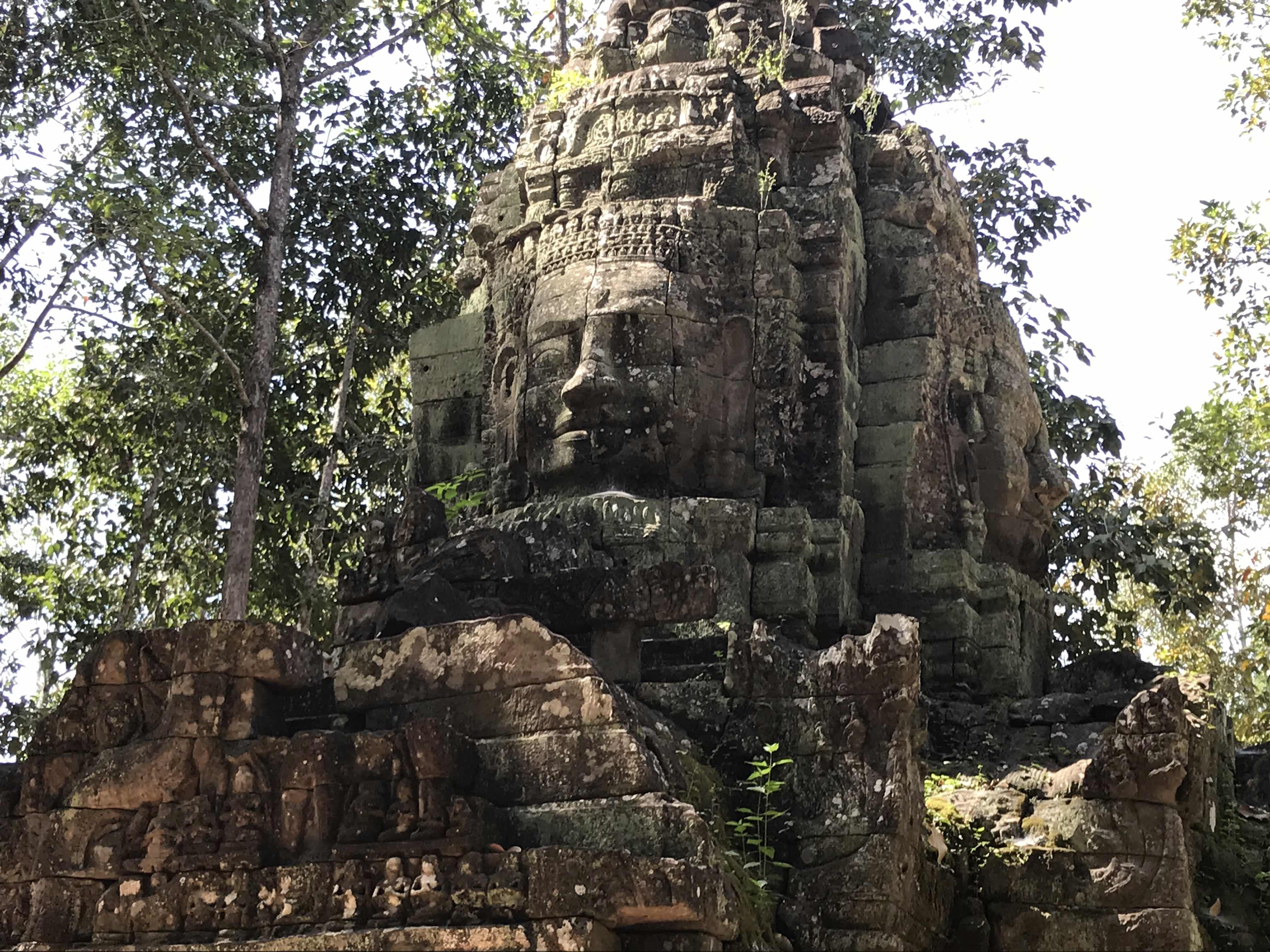 The next stop was Neak Poan, close by; Mebon, Ta Som, Neak Poak are all pretty close to each other, which is convenient but I kind of wished I could spend a little bit more time sitting in the breeze!

Neak Poan is not a temple per se, but rather an interesting monument: I walked on a worryingly rail-less wooden catwalk over an enormous lake, all the way to the center, where an artificial island has been built to house a smaller pond, and in the center of this pond is the Neak Poan shrine itself. There’s not a lot to see here, frankly, but it was nice to see a body of water after all the inland sights. 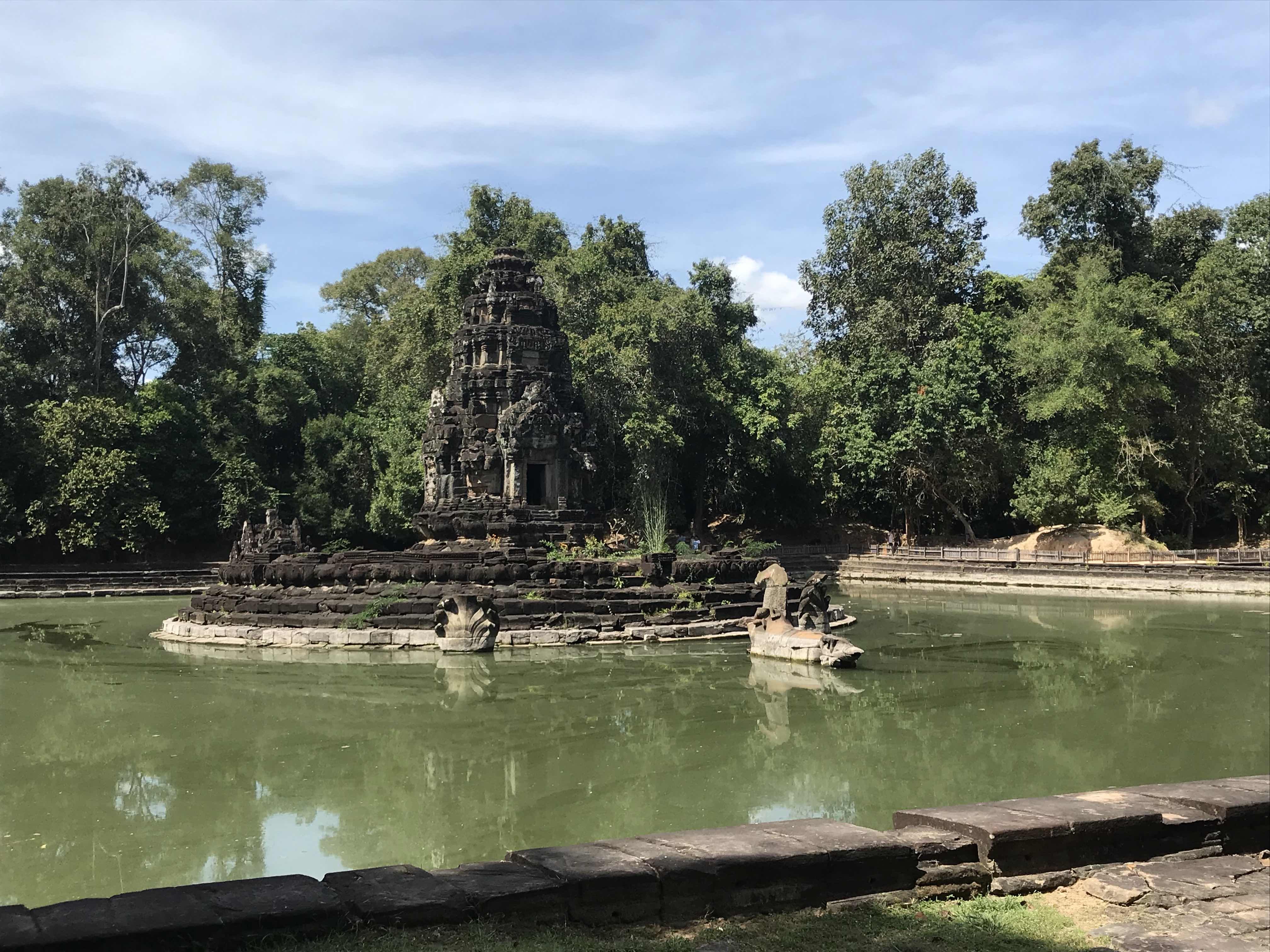 I walked back out, slooowly, as on the wooden catwalk I couldn’t overtake people, and people walk soooo slooooow. When the lady in front of me stopped to take a picture I briefly considered jumping into the lake just to get there a little bit sooner! It was around noon, so I stopped for lunch at a restaurant right across the road from the temple. It profited off its captive clientele by charging twice what you’d pay in Siem Reap, but even that is still cheap, and I was very happy to sit down and have a cold drink. I had amok, which is a Cambodian stew, and it reminded me of Vietnamese cuisine: more aromatic than spicy. 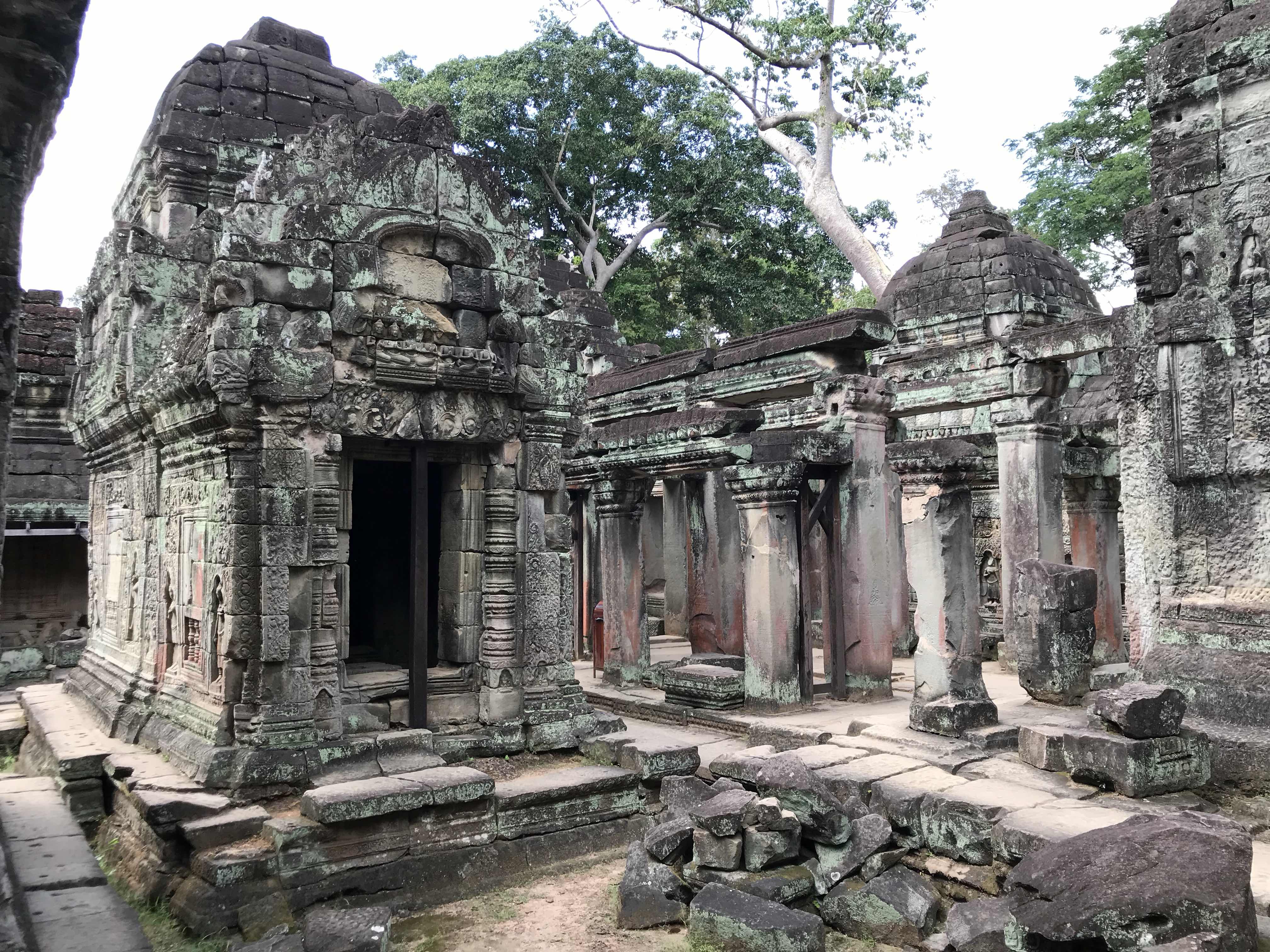 So once again we’d left the best for last: Preah Khan (pictured above), one of the largest temples in all of Angkor, mostly with Hindu motifs but also with a Buddhist section. This one blew me away: it is enormous, yes, but there’s also a lot more of it that has withstood the passage of time than in other places. It is perfectly square, with large, tall corridors cutting it in four equal quadrants with a shrine in the central crossroads. The corridors have -for the most part- conserved their high ceilings, so it was easier than ever to imagine the glory of the temple when it was built. I was shocked to find a two-storey structure still standing in one of the quadrants; it looked like a classical Greek building, with a row of columns holding it up. 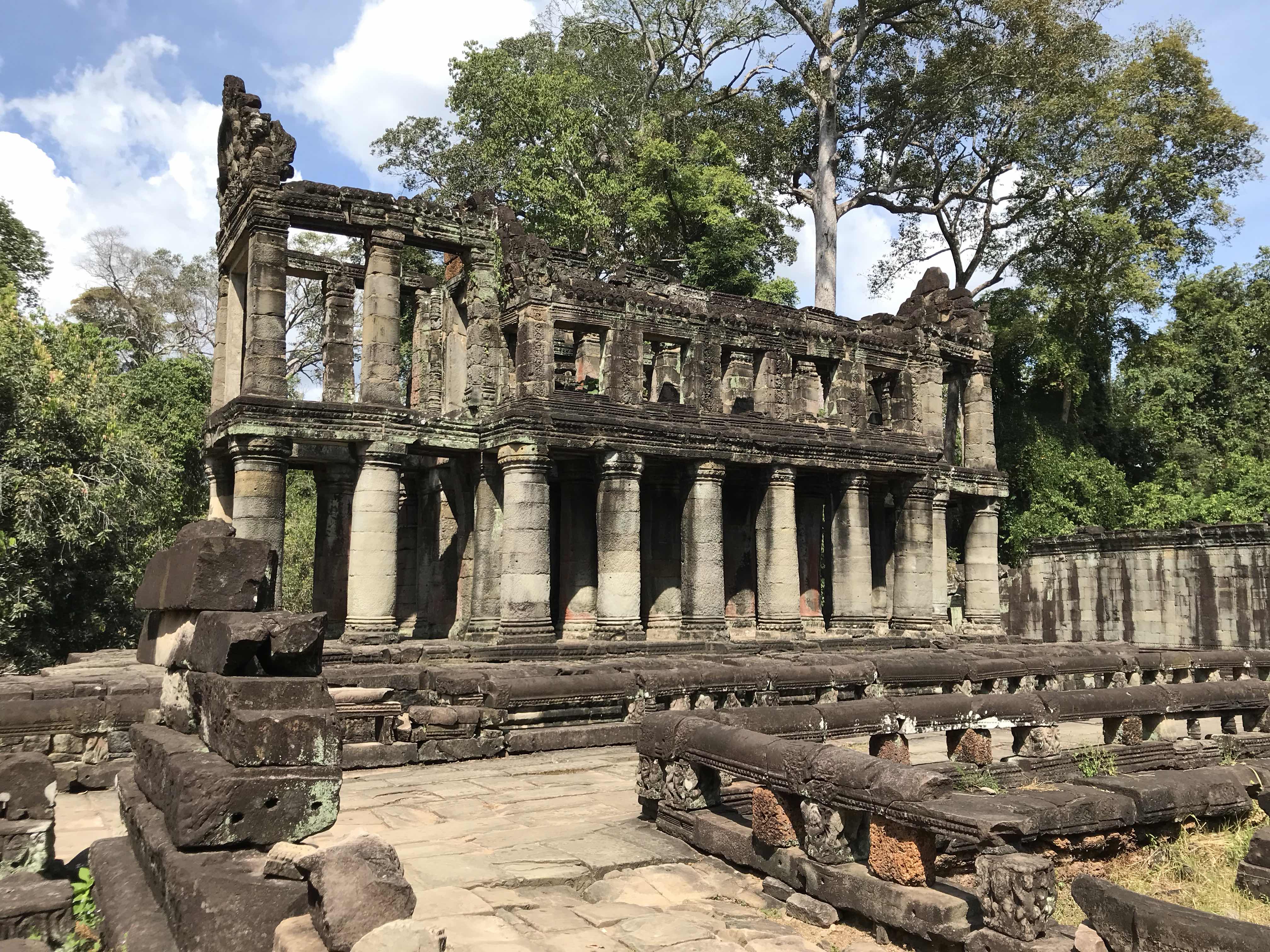 It was after lunch, and so only a few people were still out and about. For the first time I could sometimes find myself alone in a hall, and I felt like I was inside an adventure movie even more than I did at Ta Prohm yesterday, walking up and down corridors, inspecting enigmatic carvings and beautiful statues that stood at attention or had crumbled all over the floor. One of the sides had an enormous tree that had almost completely crushed one of the outside walls with its powerful roots, creating an impressive sight. 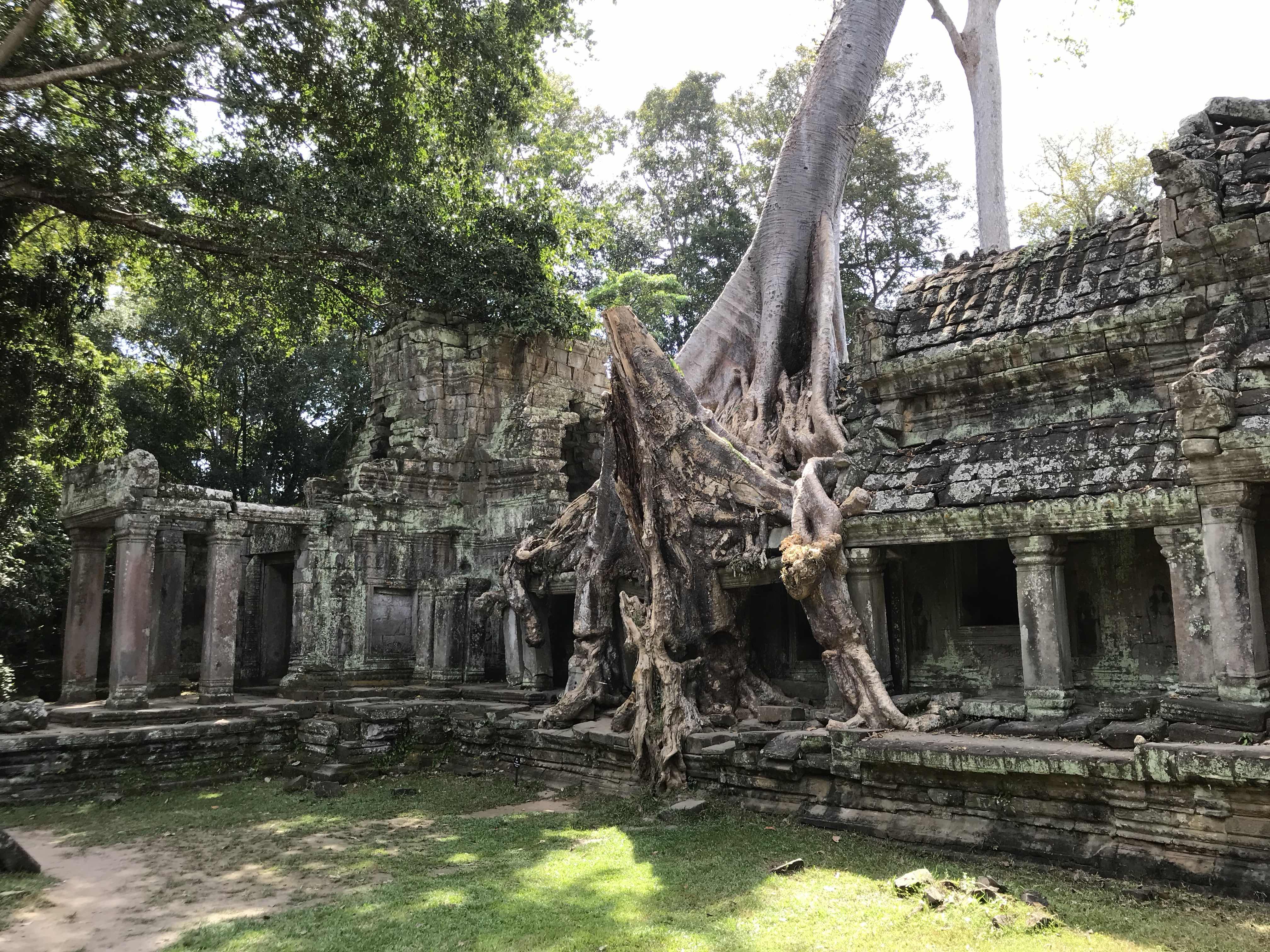 Everywhere I looked the columns, the walls, the doors, the friezes, all were covered in beautiful carvings. It boggles the mind to think of the archeological wealth of the Angkor area. Where else in the world can you find so many buildings, so large, in such a wide area as this? I easily spent an hour in Preah Khan, checking out all four sides of it, often going down a path I’d already been to but finding new details and views anyway. Because so many of the ceilings have survived, it’s super easy to explore Preah Khan in the shade, peeking out when spotting an interesting sight. I took my sweet time to walk around, because I didn’t want to miss anything! I realize I don’t have a lot of establishing shots, but since it’s all in one level there was no vantage point from which to photograph the entire place. You’ll have to take my word for it that it’s a giant complex! 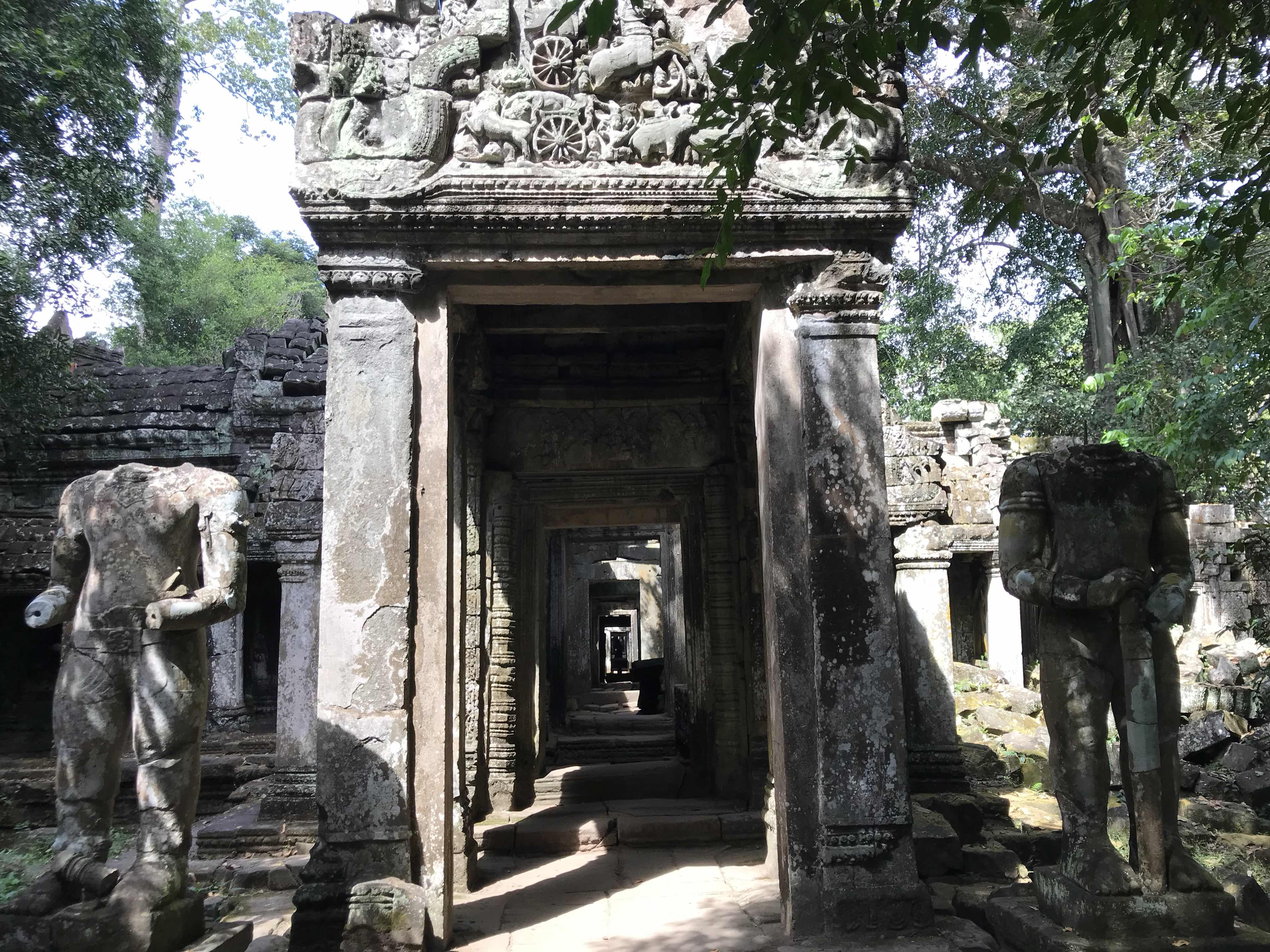 This was it for my Angkor experience, as I fly out tomorrow morning to Bangkok. Today I was less tired than yesterday, partly because of the longer rides but also because I took a lunch break. All in all, Angkor has fulfilled my wildest expectations: all the pictures you’ve seen make it justice, but then there are so many more sites and nooks that you didn’t expect but which are as impressive as the famous ones. Sure, it’s touristy, and it can get crowded and hot, but what are you going to do -never see it? We have to make our peace with the fact that there are 7 billion of us on this planet and we all like to admire the wonders of the world. If you’re considering a visit: please come!

Bonus update! I went out into Siem Reap in the evening to check out the Lonely Planet recommended shops for omiyage. Artisans d’Angkor is a very large handicrafts workshop, and they had nice things but fairly upscale/expensive. Usually when stuff has a pricetag it’s not for bargaining, but maybe it is? There was this lady who insisted on following me around the store waiting for me to look at something in order to make a pitch, and that drives me nuts so I left. I really liked Smateria, which is apparently an Italian, Cambodia-based label that produces purses, wallets and similar stuff with recycled plastics. They had quite a few colorful, modern items, and I may or may not have kicked off my omiyage-gathering mission right then and there!

I’m happy to say, by the way, that I still have my Southeast Asian Street Crossing Skillz! Unlike Vietnam, here in Siem Reap there are pedestrian crossing lines painted on the road, but they may as well have drawn Hello Kitty faces instead for all the good it does. Just cross whenever you like, slowly, making eye contact with the incoming traffic, and react to drivers going right or left. Thus I made my way to Miss Wong, a stylish opium den-themed bar with a small but good Shanghai-cuisine dinner menu. I got to try a fruit-flavored tonic, had delicious beef noodles, then got a $1 mango shake from a street stand on the way back to the hotel. Mission accomplished!