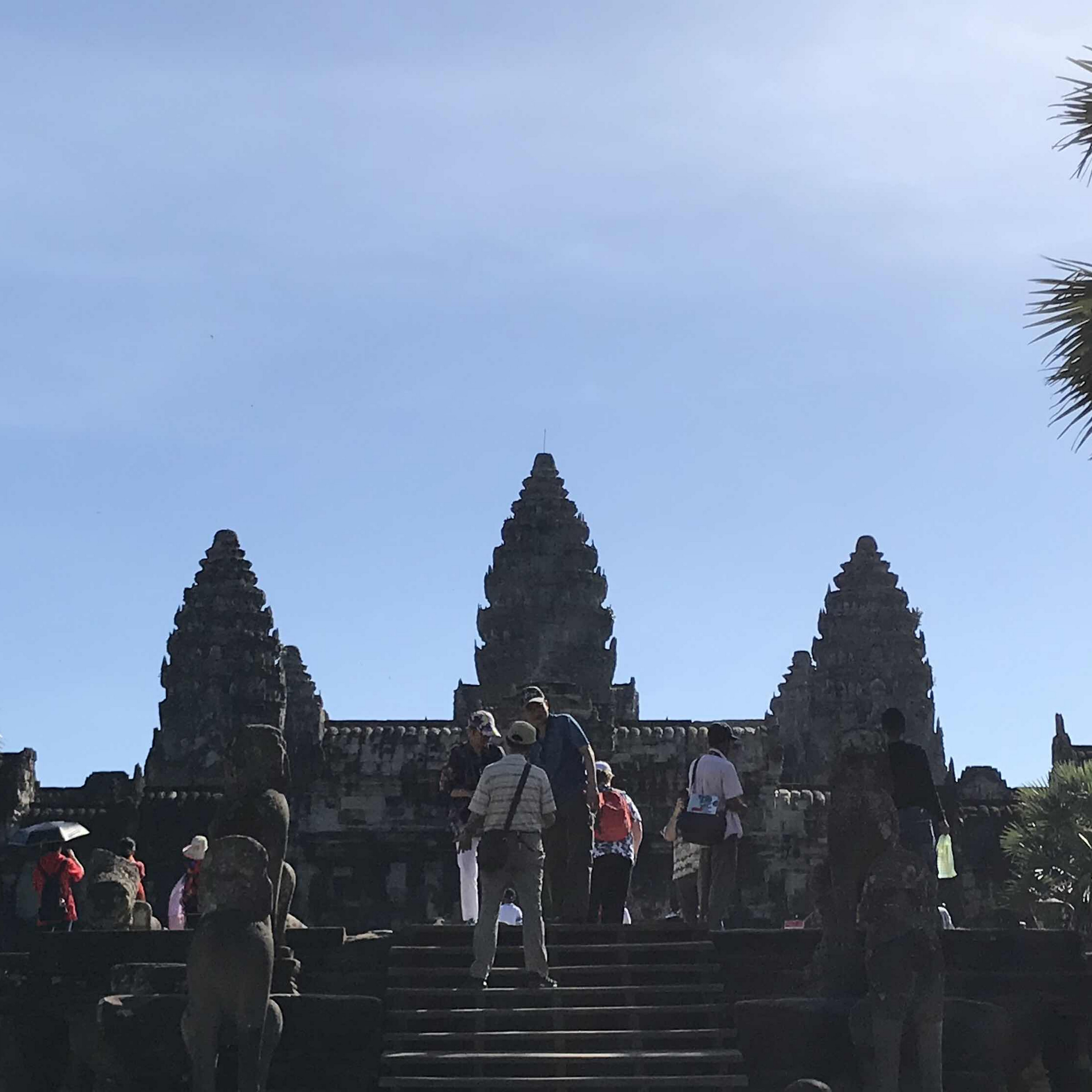 Today was my first full day of holidays, and I had my eyes on the prize: I signed on for a tour of the main temples of Angkor!

Beofre this trip, I thought Angkor Wat was one big temple in Cambodia, but in fact it’s the name of just one temple in the vast, sprawling natural reserve of Angkor, a stunning 400 sq km expansion that used to be a big metropolis with many Buddhist and Hindu temples, many of which have survived to this day in different states of conservation. The temples are too far from the city and even from one another to walk, so you have to decide if you want to rent a scooter or a bike or if you want to be driven there. I hired a tuk-tuk driver via my hotel who drove me to each temple, then waited outside while I visited at my own pace. When I was done, I came out and he’d drive me to the next one. It covers all my transportation needs without chaining me to a group or a tour guide. Some drivers go the extra mile (pun intended) and wait for you on the other end of the temple, so you don’t have to backtrack, but mine didn’t. Not a big deal -and also reduces the risk of miscommunication!
A lot of people arrange their trip to be at Angkor Wat for the sunrise, but that involves getting up at 4AM, so 1) nope, 2) also I was so sleep deprived yesterday that I couldn’t get up that early if I tried, and 3) you’ll have to elbow your way through a crowd of thousands to see the sunrise at the good spots. The one advantage is that then you’d get to visit the temples before the heat kicks in; I started my tour at 8AM and indeed when I finished around noon-1PM the sun was beaming down at full force. Before noon, though, it wasn’t that bad; hot, certainly, but the temples offer plenty of opportunities for shade and many have breezy corridors. I had also prepared for the sun by putting on sunglasses and a baseball bat (like an American on the lam!) and slathering on an inch-thick layer of sunscreen that I reapplied between temples. I don’t want to burn on my first day!
So I got on our tuk-tuk, which is a super rickety palanquin of sorts attached to a scooter. My first thought was that I wished it had seatbelts, although maybe it’s better to be ejected from this deathtrap in case of accident? The drive from Siem Reap to the ticket office was maybe 10 minutes, over roads that are paved -though full of potholes- but extremely dusty. In fact there were men with leafblowers blowing all the dust OUT of the potholes! It’s not a bad idea to pack a scarf for this, as at the end of the day I ran my hand over my face and I could feel a grainy layer of dust and grime on it.
Prices for the Angkor tickets have hiked significantly in recent years, so it’s very likely that the websites you’ve checked are already outdated. As of writing this, the one-day ticket is $37 and the three-day ticket is $62, and thankfully you can pay by credit card so as not to deplete your cash reserves. 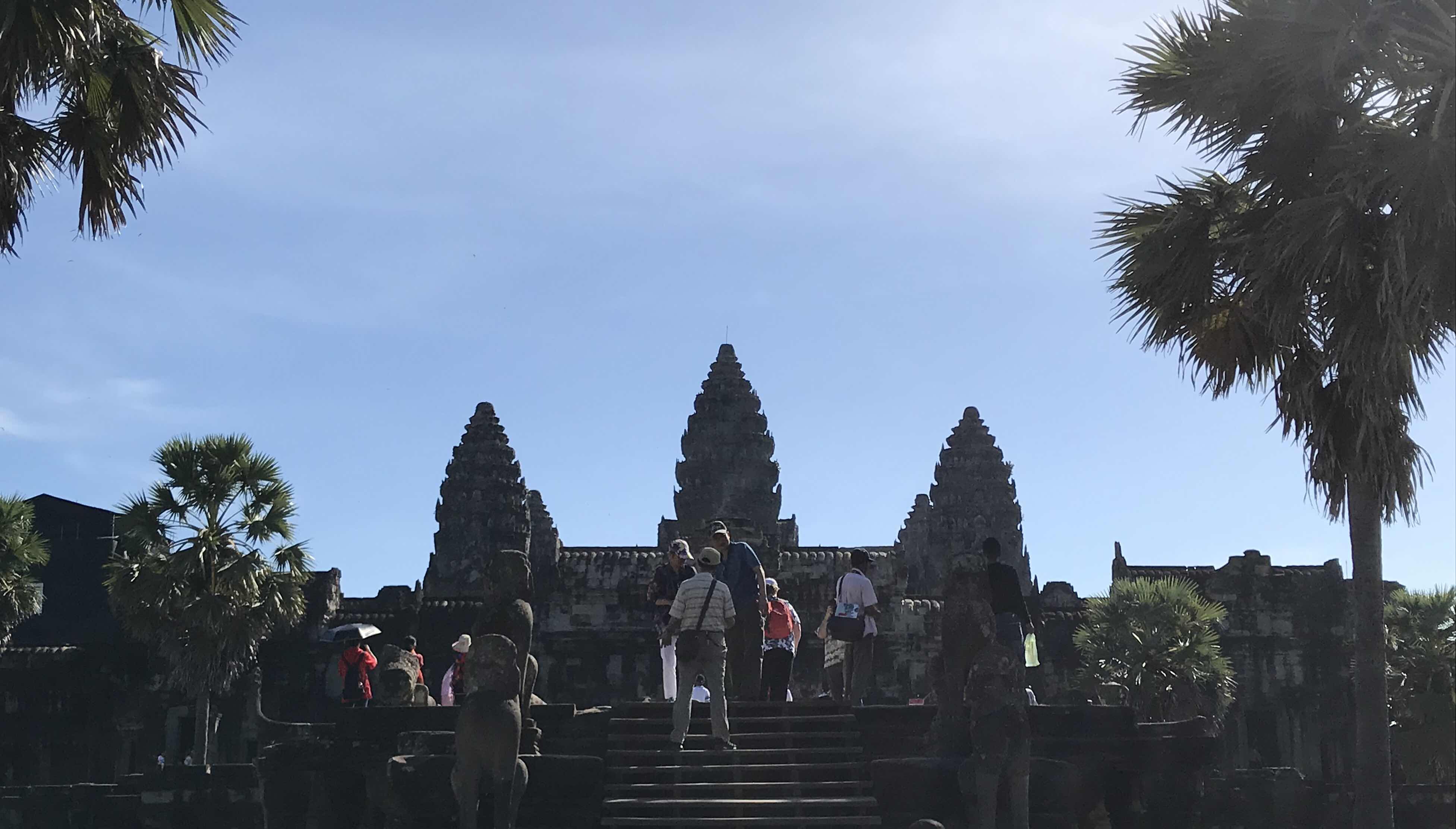 Once in possession of a ticket, our first stop was the magnificent Angkor Wat, the main temple in the ancient city of Angkor. Its spires are world-famous, appearing even in the Cambodian flag. After wanting to visit for years, and after reading so much about it and seeing so many pictures of, seeing it in person in the heat and with the tourists… still met all my expectations! It’s staggering to think that these formidable structures were built in the 12th century. The temple was full of corridors, cloisters, stairs and spires of diferent sizes, and every inch of every stone seemed to be engraved with religious or just decorative motifs. The place is deceivingly large: on the map it is just one square temple of many, but I think I spent almost an hour inside. It also spans multiple levels, which adds to the complexity. 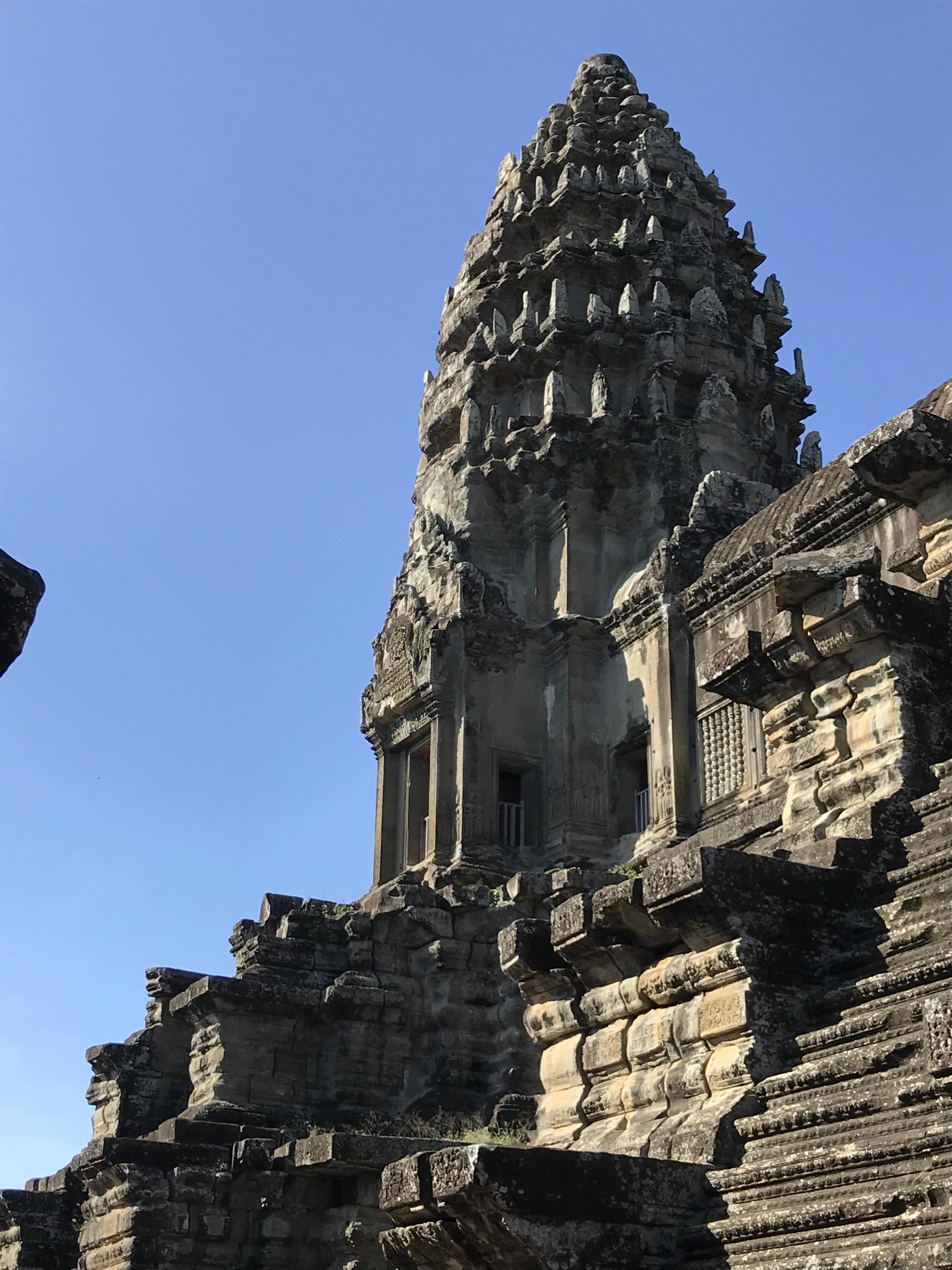 Do bring a map, if you can find one, because there are none inside any of these places, and since they’re all square and symmetrical it’s quite difficult to know which side is which. I had to take a picture of the entrance of each temple just so I could later identify which one I came from! 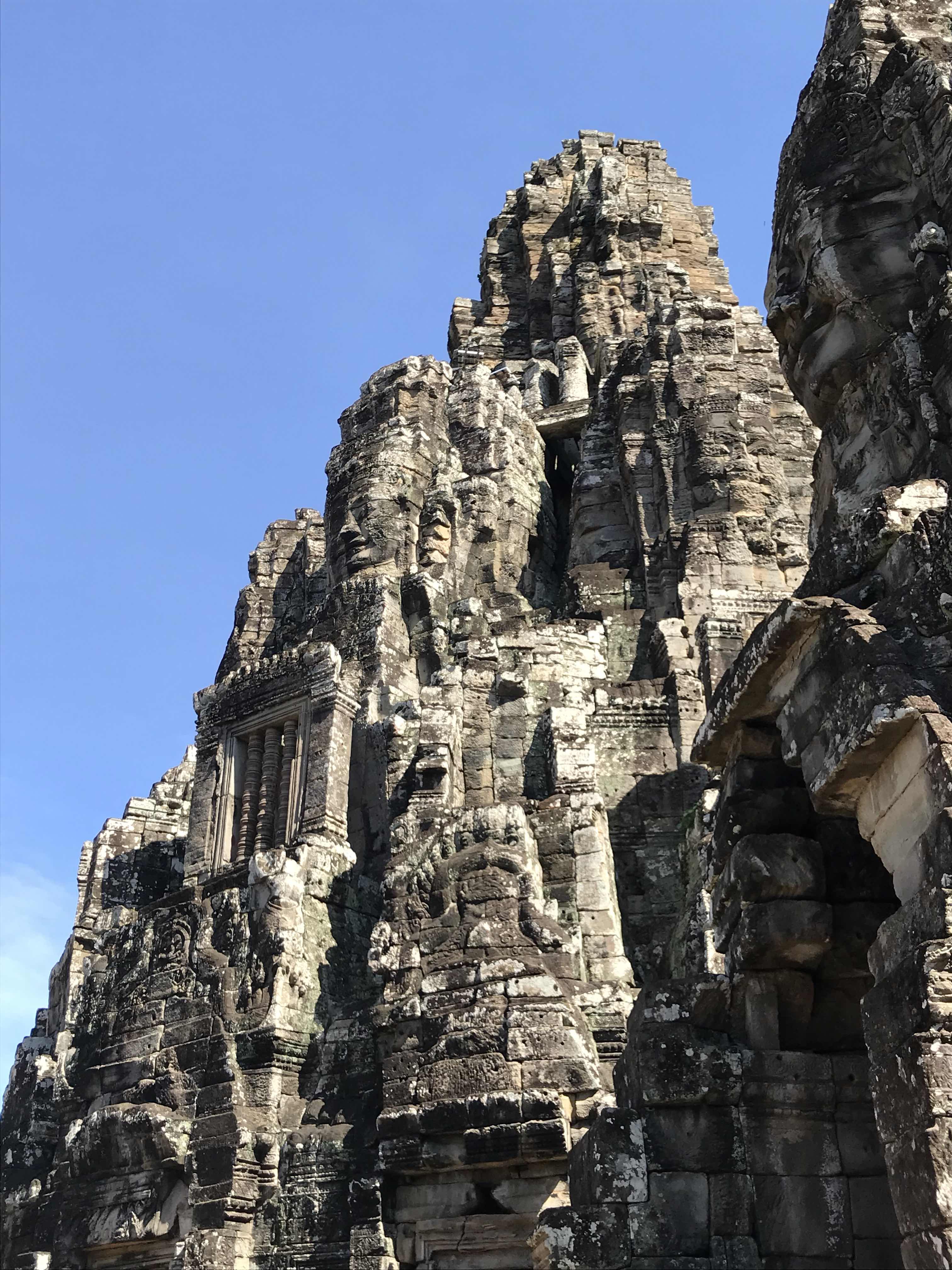 After Angkor Wat, I was driven to Angkor Thom, which was the city proper. My guidebook says up to a million people lived in this city, which is incredible for the middle ages. There are multiple sites inside the large confines of Angkor Thom, the most notable of which is the Bayon (pictured above), another 12th century temple that, like others in Angkor, was built as a Buddhist temple but then used for Hinduism as well depending on the religion of the reigning king. The Bayon is built like a little mountain, so you have to climb multiple levels to get inside. This is not a coincidence; some of these temples were designed to resemble mountain ranges from afar, as a representation of the mythical Mount Meru. The most striking characteristic of this one is that it’s quite literally covered in beautiful carvings of faces: wherever you look, every column and every spire has multiple faces smiling calmly as the centuries pass them by. The atmosphere is enchanting, but also a bit eerie: these faces were smiling long before we got here, and they’ll be smiling long after we’re gone… 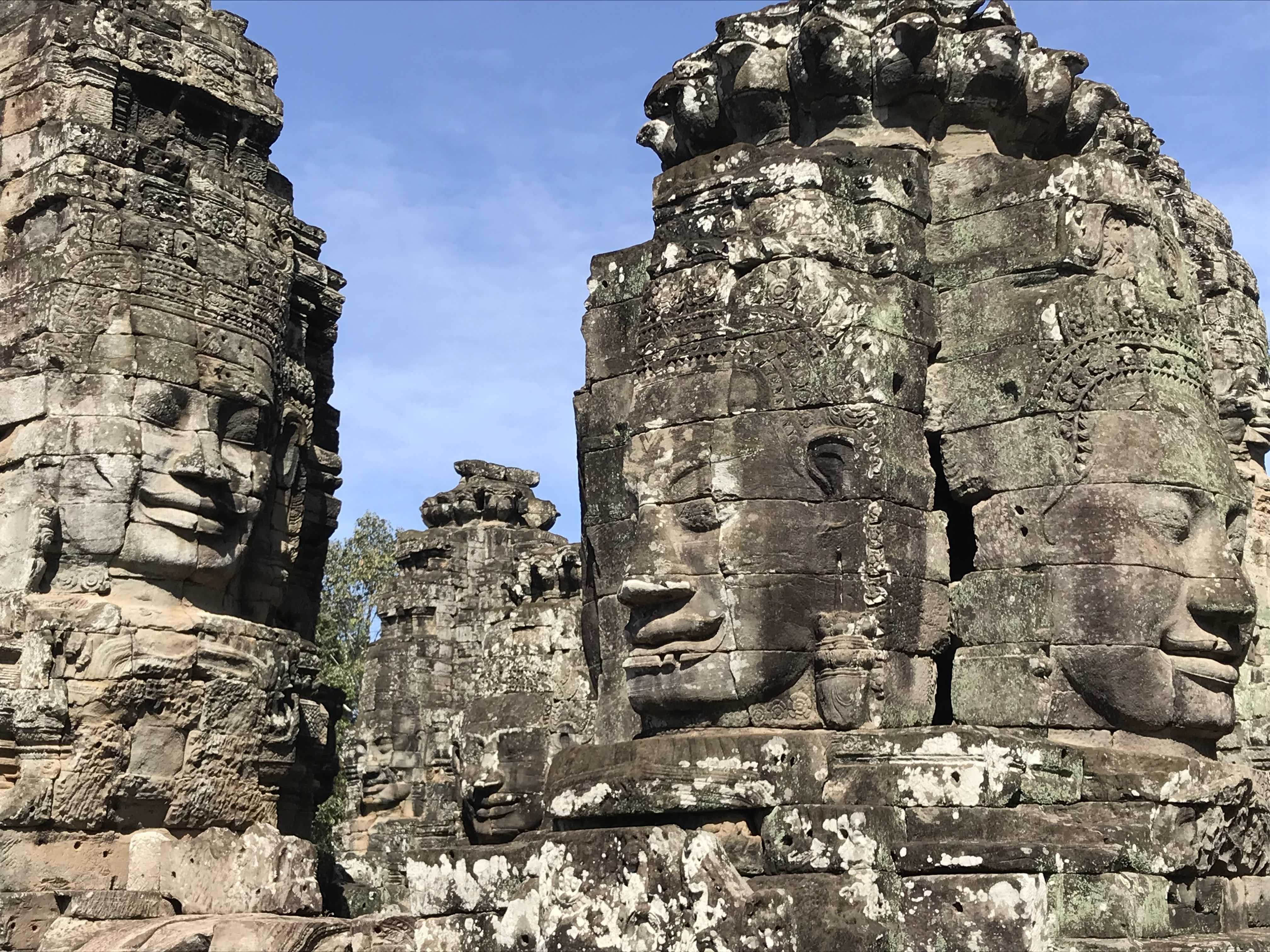 Coming down from the Bayon, I took a walk around the terraces of Angkor Thom, where I could see smaller temples, ancient walls half in ruins and bodies of water. I also checked out Ta Keo, another small temple just outside the gates of Angkor Thom. I kind of waltzed through this one, I’ll admit, because these small temples were starting to blur together; this happens when travelling in Asia but hopefully not on the first day! I think Ta Keo was the one that had an extremely steep climb up over very tall, very thin steps. Seriously, be careful! 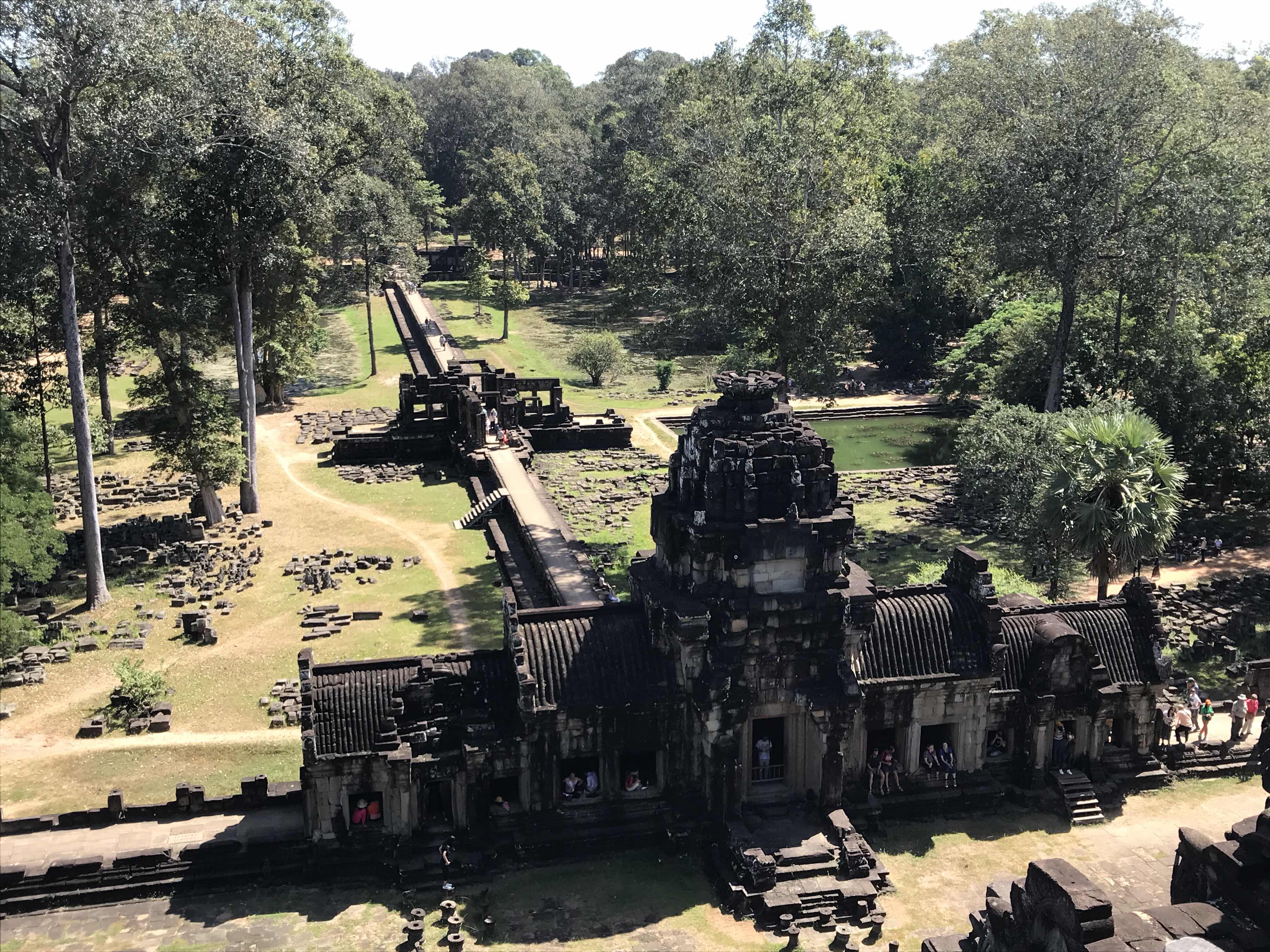 Finally we got to the most spectacular temple of all: Ta Prohm. A lot of the pictures you no doubt associate with Angkor Wat are in fact from Ta Prohm, a beautiful temple at ground level that over the last seven centuries has been slowly engulfed by nature. This is the temple with the trees growing all over it! 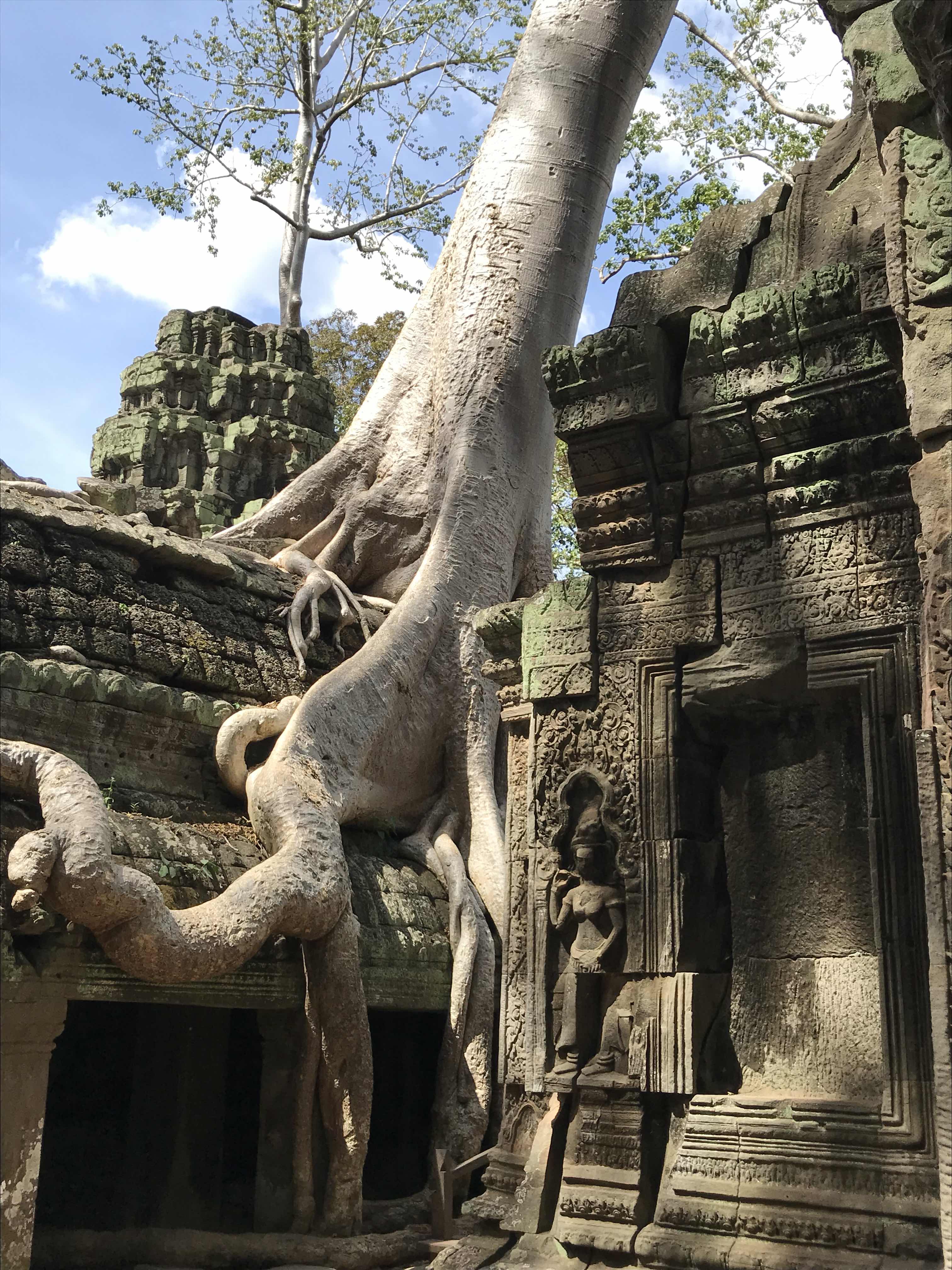 There’s one tree that hugs a wall that is very famous for appearing in one of the Tomb Raider movies (tourist etiquette is in place at these most photogenic spots: people form an orderly queue so each one can take a proper photo by themselves; you have to wait but you get a picture that looks like you had the entire place for yourself!), but in fact there’s a lot of trees growing around stone structures or downright crushing them in very slow motion. One of them is so tall that it looked like either it or the building had to topple over. 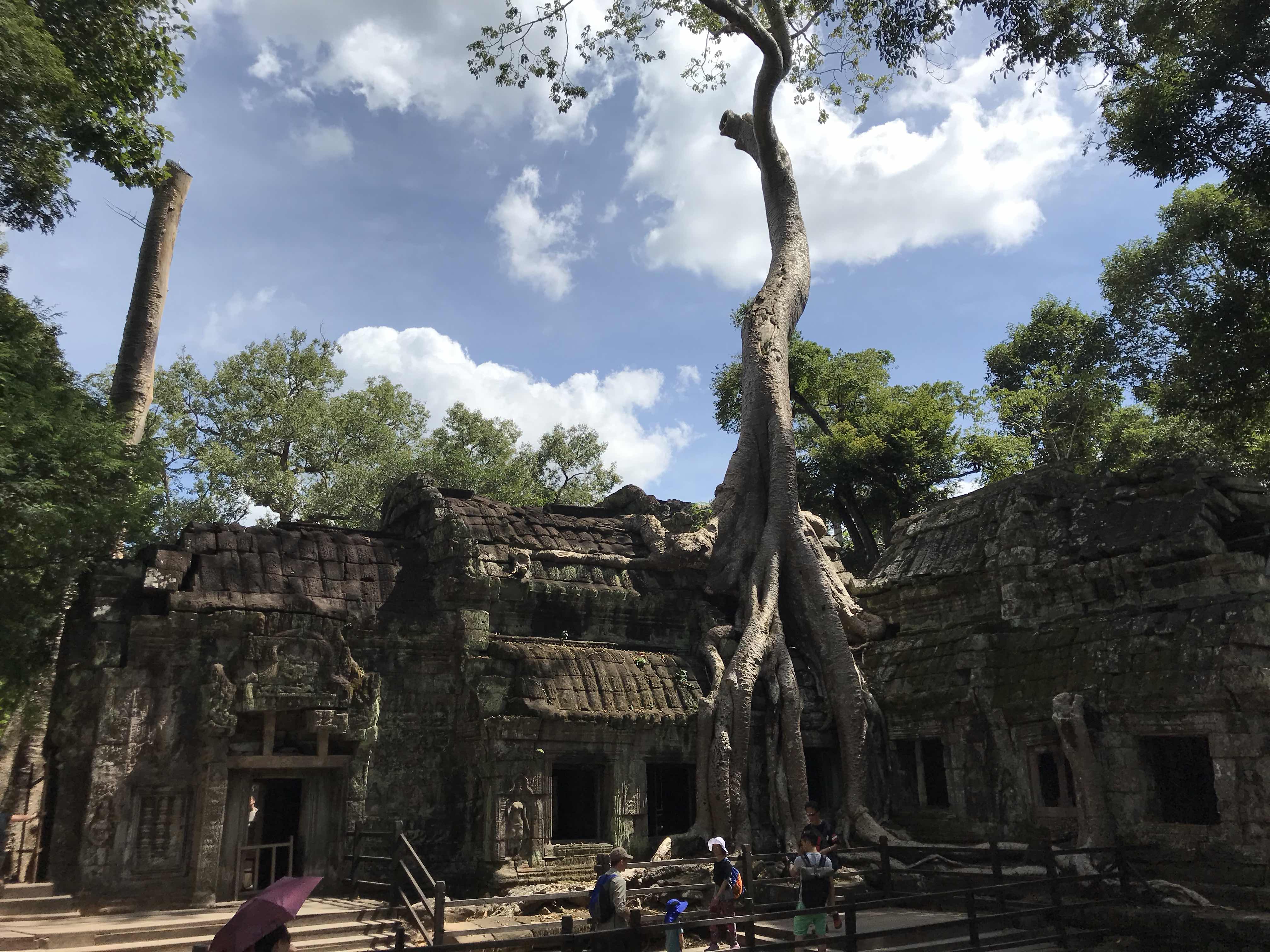 After Angkor Wat, this was the most crowded spot of the day. Although I was never alone, when I wanted to photograph something I only had to wait a minute for an opportunity. There were some groups, but most tourists were on their own, and perhaps it was the majesty of the place but they kept the noise to a reasonable level. The place felt serene, in that beautiful mixture of nature and architecture after the jungle reclaimed the temple. I sat down to rest inside the inner sanctum, observing the way tree roots traced the corners and straight lines of the stone under them searching for soil. 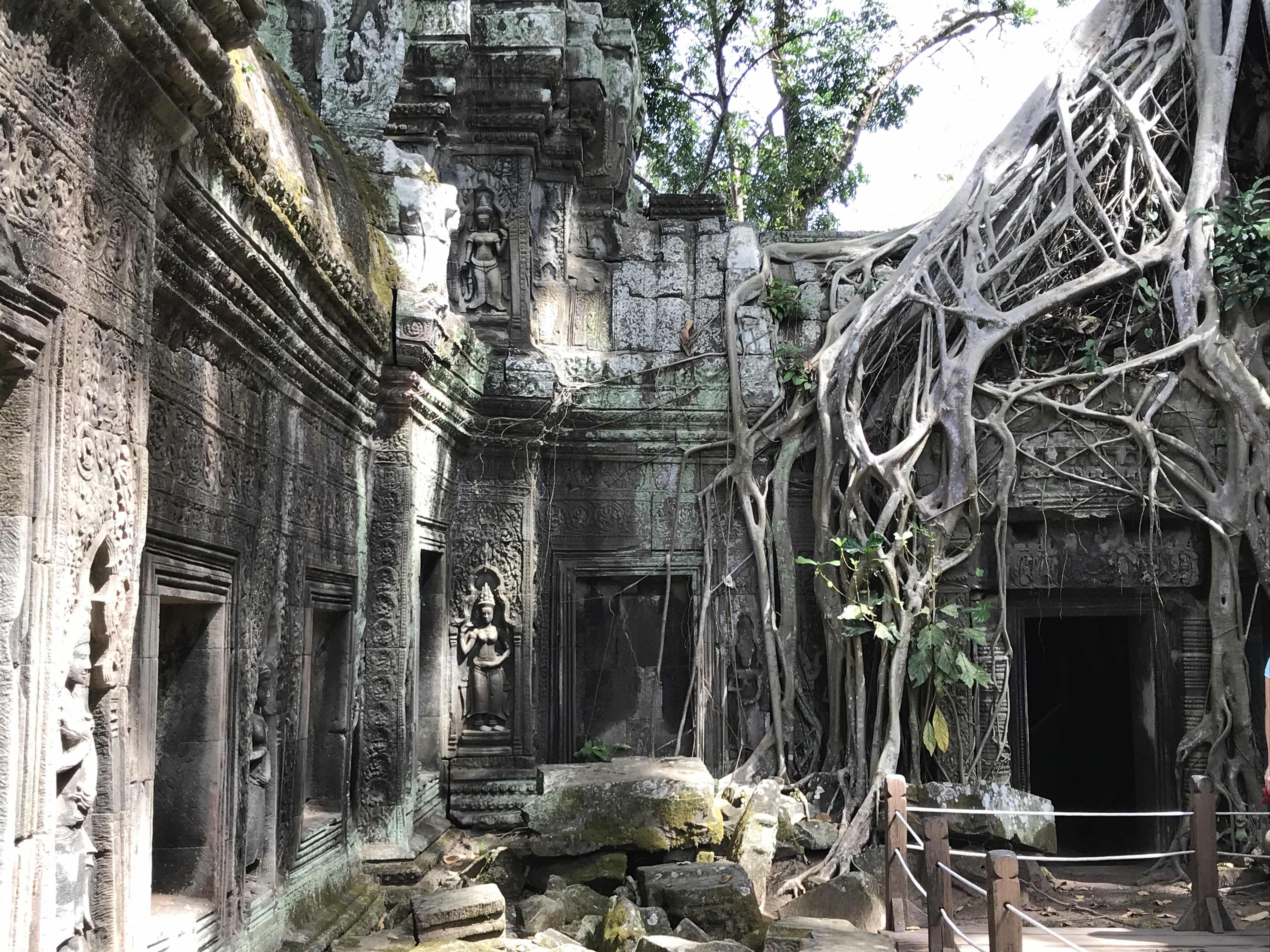 We still had one more temple to go after Ta Prohm, which was a bit overkill for me: I successfully avoided burns, but I was still tired and sweaty by this point, so I really wanted to get back to the hotel for lunch! Thankfully, Banteay Kdei isn’t very large, and it’s also beautiful: the stonework is intricately detailed, and it also has trees snaking their roots down its walls. 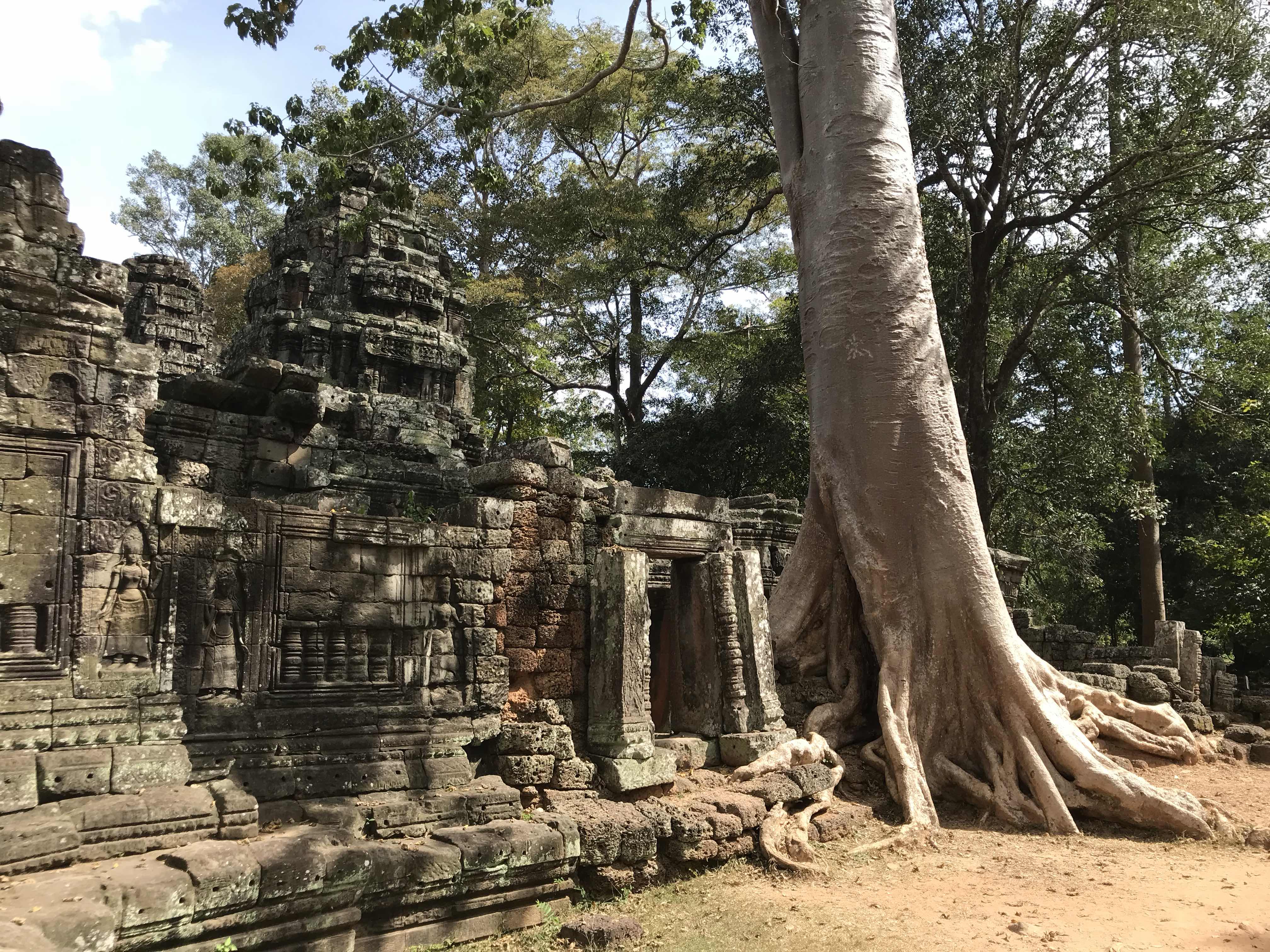 I made it back to the hotel at around 13:30, which in paper is super early but felt like I’d been out all day! I was as tired as if I’d walked all the way there and back, so for lunch I walked to a restaurant that was literally next door to my hotel and had a tasty beef lok lak (a spicy wok-fried shredded beef, yum!) and a sublime mango smoothie. Now I want to drink nothing more than mango smoothies!
I have another Angkor tour booked for tomorrow, so I decided to conserve my energies and spend the afternoon being lazy by the pool and writing in my room. I thought I’d get antsy soon but nope, the jet lag is kicking in so rest it is! I’ll need all my stamina for temple-hopping tomorrow!