First day in Seattle! True to its reputation, it was raining as soon as I left the hotel. I’d read in both of my guides that Portland and Seattle people think umbrellas are a sign of weakness, even though it rains here all the time, and sure enough, I didn’t see many umbrellas out there (I always travel with my tiny ultra-light umbrella from the future I got in Japan). Some people wear beanies, or hoods, and some people… just get wet, which seems suboptimal to me, but I’m not gonna tell you how to live your life! 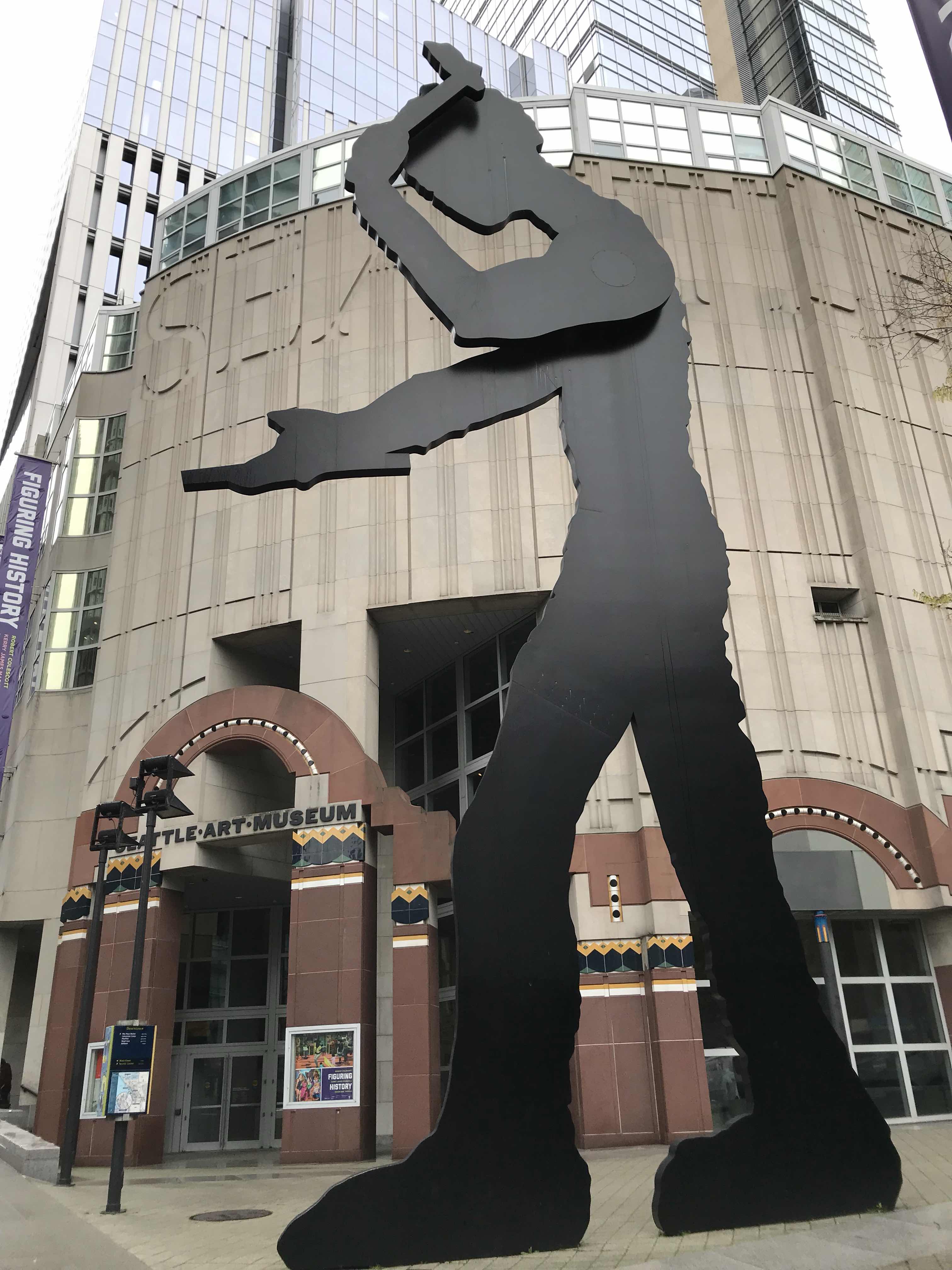 Because of the rain, I started by visiting the Seattle Art Museum, which occupies a large modern building downtown. It has four floors, but really the galleries occupy only two. I was rather underwhelmed by the collection here, I have to say; it feels like they do a little bit of everything but they don’t have a deep enough representation of any one theme, time or style.
They have a series of tiny rooms for Egyptian, Graeco-Roman, and Islamic art, some European paintings and decorative arts, African masks, Native American totems and fabrics… It would be unfair to compare it to the massive Art Institute of Chicago, but on a closer level I was more engaged by the Portland art museum, which seemed to try doing fewer things better. The contemporary section did have some some interesting pieces, including a rather unusual Rothko: 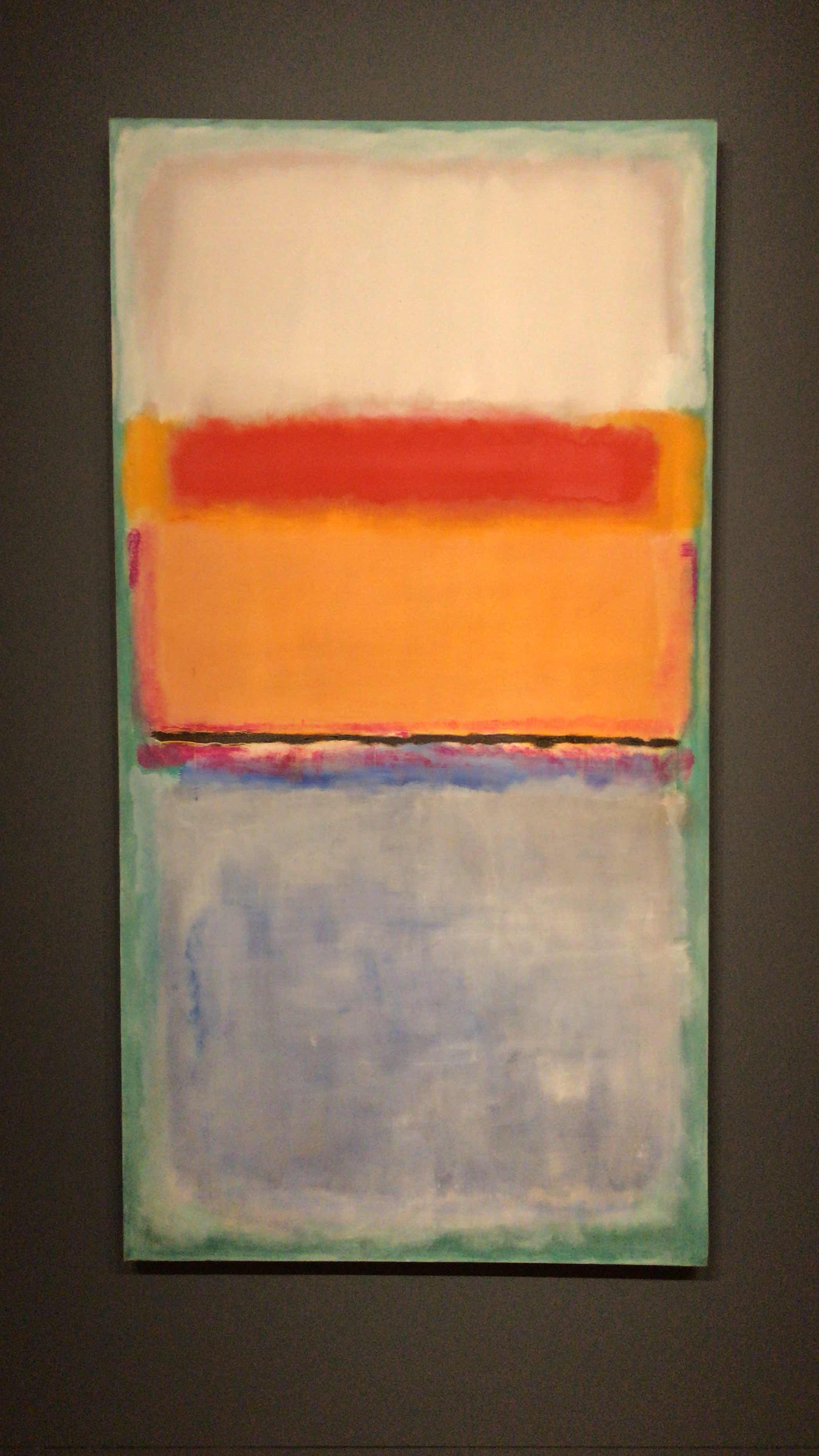 After the obligatory traipse through the gift shop, I peaced out of the museum to find it wasn’t raining anymore. I made my way to nearby Pike Place Market, one of Seattle’s institutions, a farmers’ market with indoors and outdoors sections. It certainly has a lot of character: the fishmongers on the main level put on a show of tossing enormous fish to each other across the air, to tourists’ amusement. There are beautiful tulip stalls, handicrafts, spices, preserves, delis… There are also several actual shops selling music records, souvenirs, vintage posters, second hand books… And one large geek store with a bottomless collection of TV/film/videogame/comic merch! The last thing I expected from the public market, but there you go! 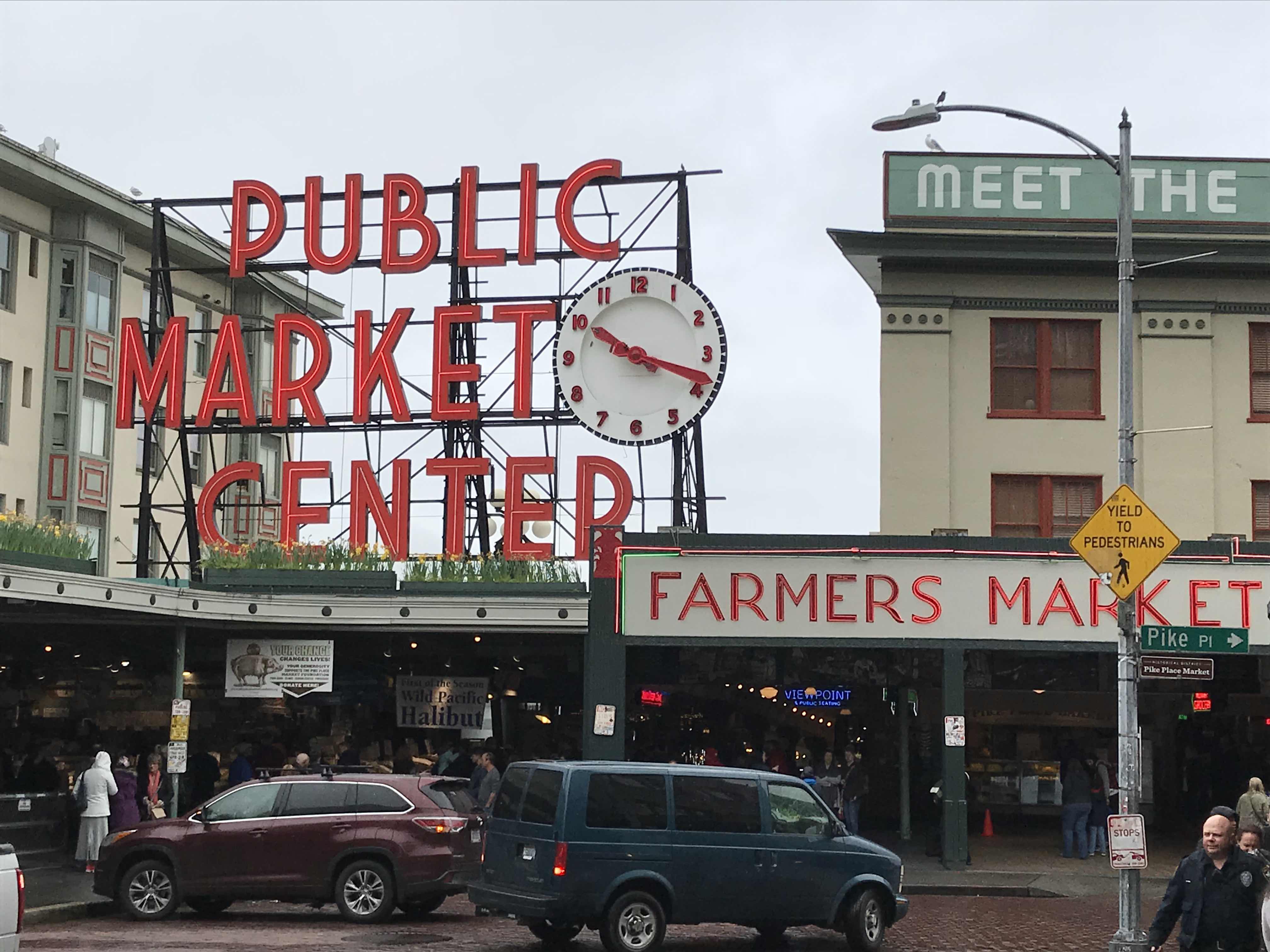 Right across the street from the market is the first Starbucks, which still has the old signs advertising cofee, tea and spices. Apparently they have some things in this store that they don’t offer in all the others, but there was a literal queue to get in, and I’m not about to queue for a Starbucks (I don’t even drink coffee!). It’s nevertheless interesting to look at this unassuming coffee shop and think of the empire they’ve built, as evidenced by how there’s now a branch in every single block of this town! 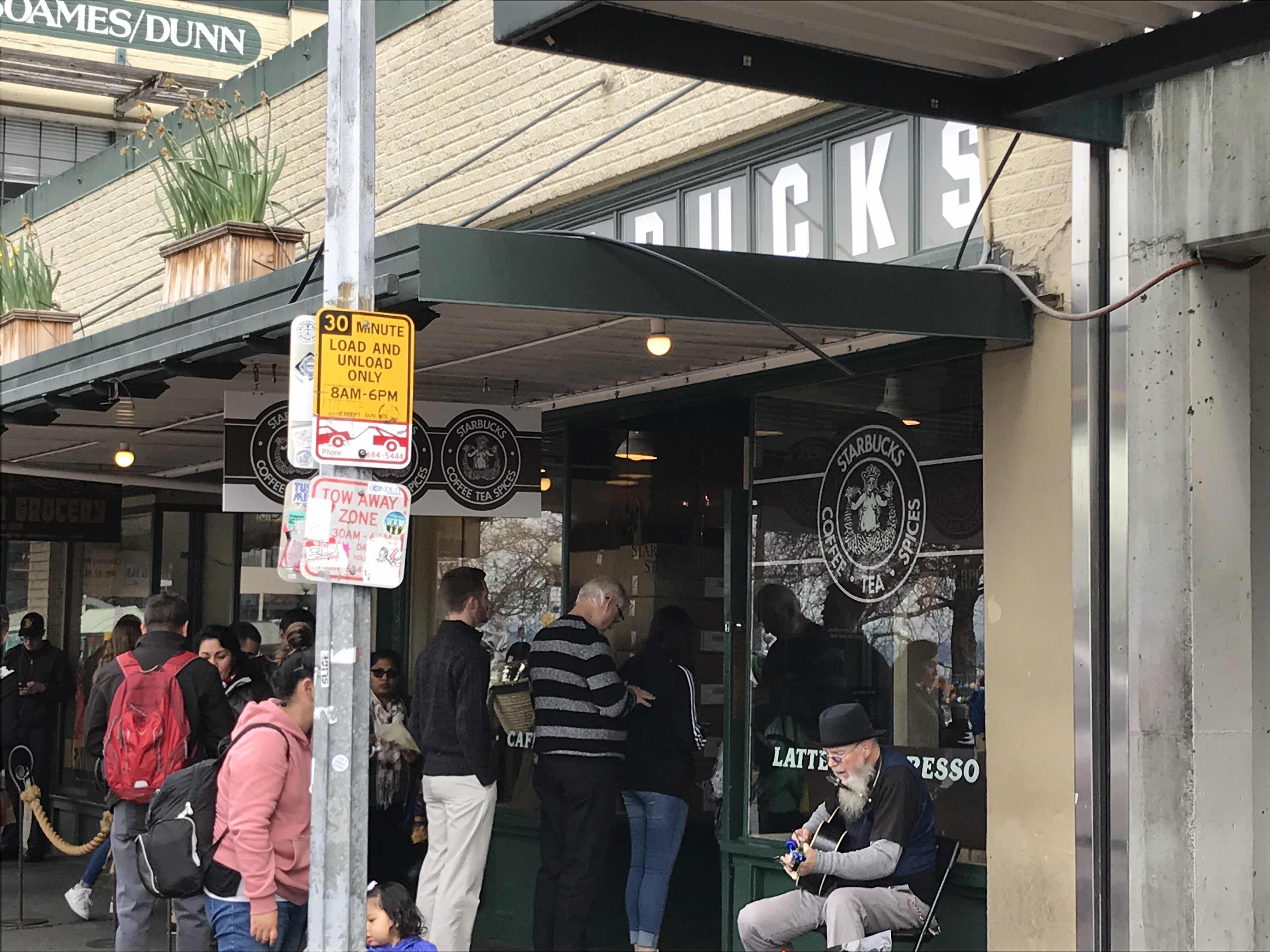 I took a look at the Waterfront, Seattle’s response to San Francisco’s pier 39. There are three piers here, with the touristy gift shops and restaurants you’d expect from this kind of place, although in fairness some of the gift shops had more legitimately interesting souvenirs than others (there’s one called Ye Olde Curiosity Shoppe that specialises in bizarre knickknacks. It’s an okay walk marred mostly by the fact that Seattle’s shore is a horrendous sight: on the opposite side you see the chimneys and giant cranes of the freight port, and on this side there’s a monstrous three-story-tall freeway covering whatever you could see of the city. I believe there are plans to drive this freeway underground, and if so it won’t be too soon! 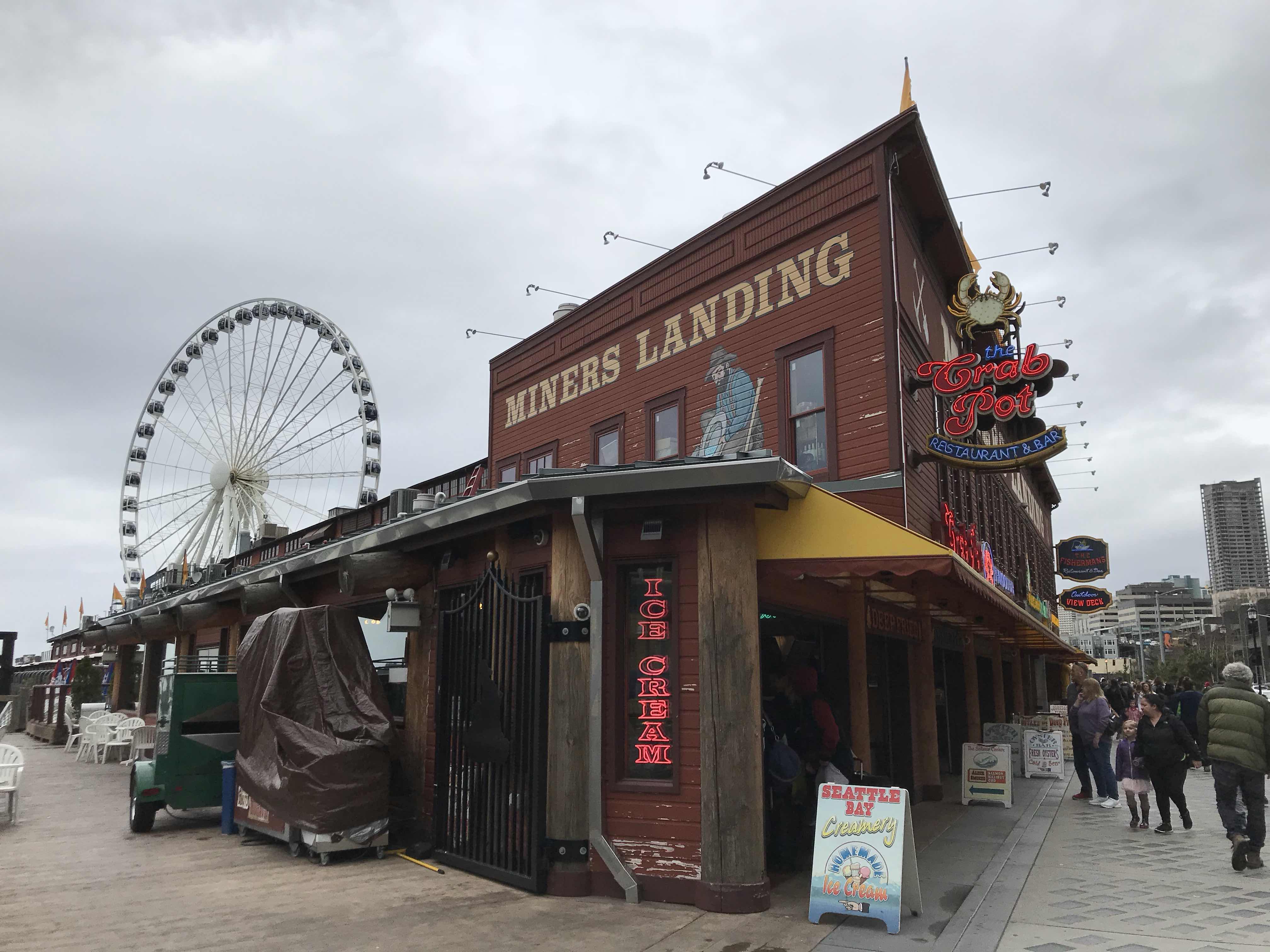 By the time I was done walking around, I was shocked to notice that the skies were clearing. This was my one chance to go somewhere elevated to get a bird’s eye view of the city! The number one observatory in the city is of course the famous Space Needle, built for the 1962 World Fair, but it had several disadvantages for me: it gets very crowded, it’s fairly expensive, and most of all… You can’t see the iconic Space Needle from the Space Needle! So I headed instead to the SkyView deck in the 73rd floor of the Columbia Center downtown! 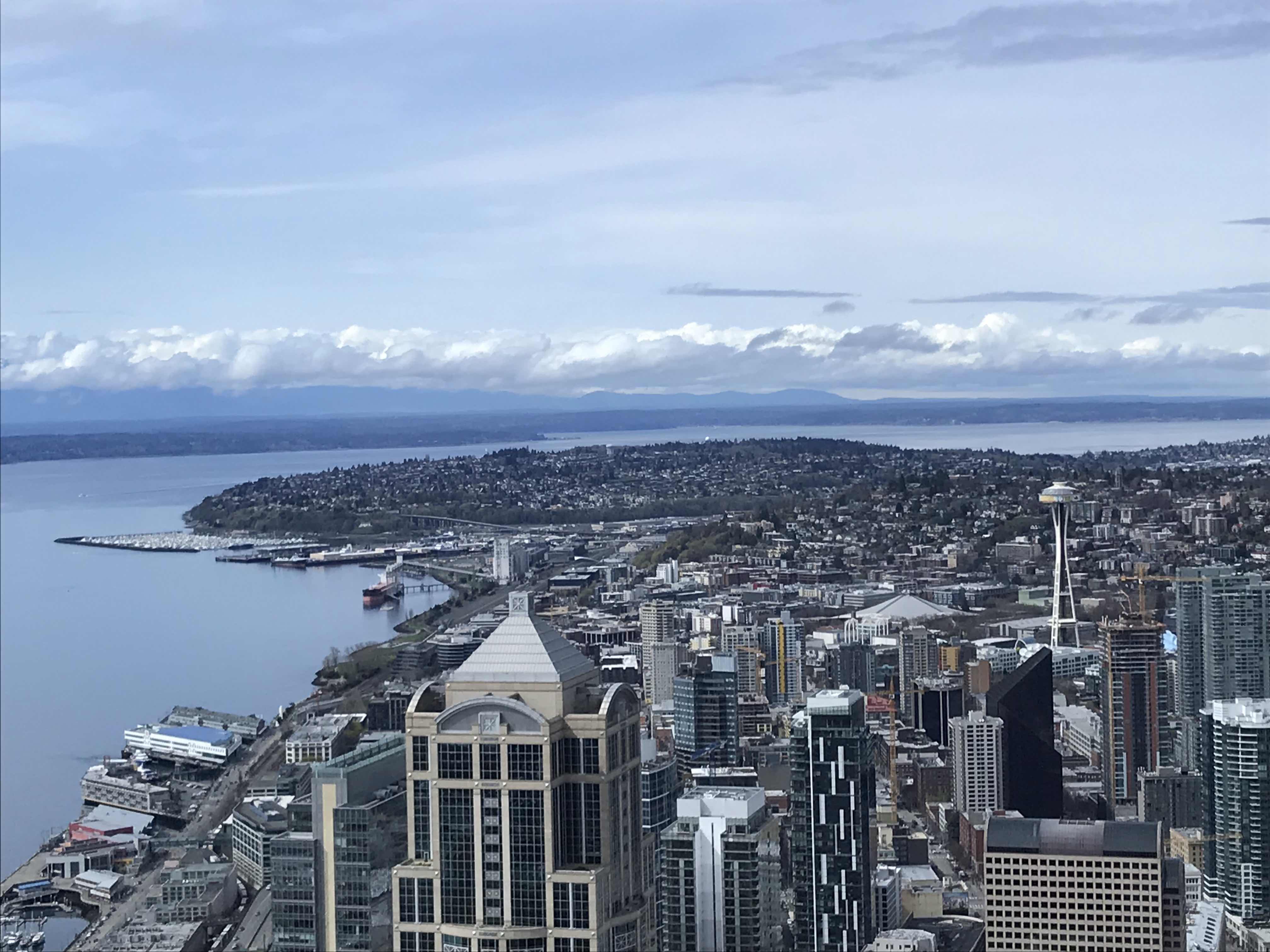 This one’s $15 and has spectacular 360° views of the city. I was amazed by the topography of my surroundings, the lakes pouring out into the sea, the trees dotting the city, and especially a striking range of snowy, rocky mountains in the background. Like in Portland, when you’re in the middle of the city it’s easy to forget that you are very closely surrounded by agrestic mountains and forests. I wonder if you can see Mount Rainier in the distance on a clear day. 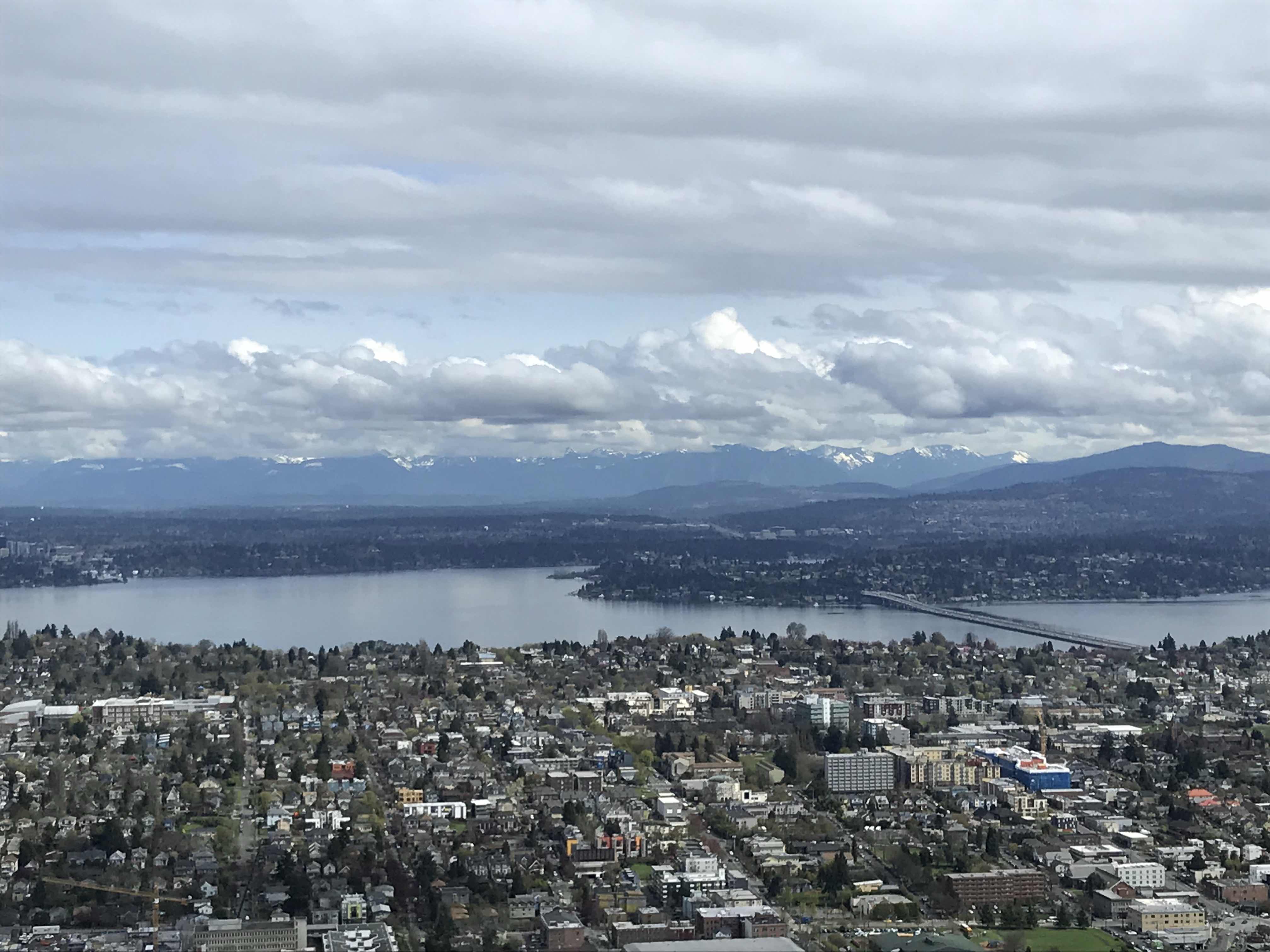 I needed a rest after all this, so I stopped at the Starbucks on the 40th floor, allegedly the highest one in the world. There, I had my share of historic coffee shop branches! I don’t know if the dizzying view is better than that of the Starbucks above the Shibuya crossing, but on this one I had a seat and a table to myself, so I can’t complain.
I didn’t have any further “official” plans for the rest of the day, so I took a walk around the suddenly sunny downtown, rested my feet at the hotel, amd at sunfall snuck out to watch Ready Player One -there’s a theatre literally across the street and the neons shine directly onto my window, so the temptation is hard to resist!