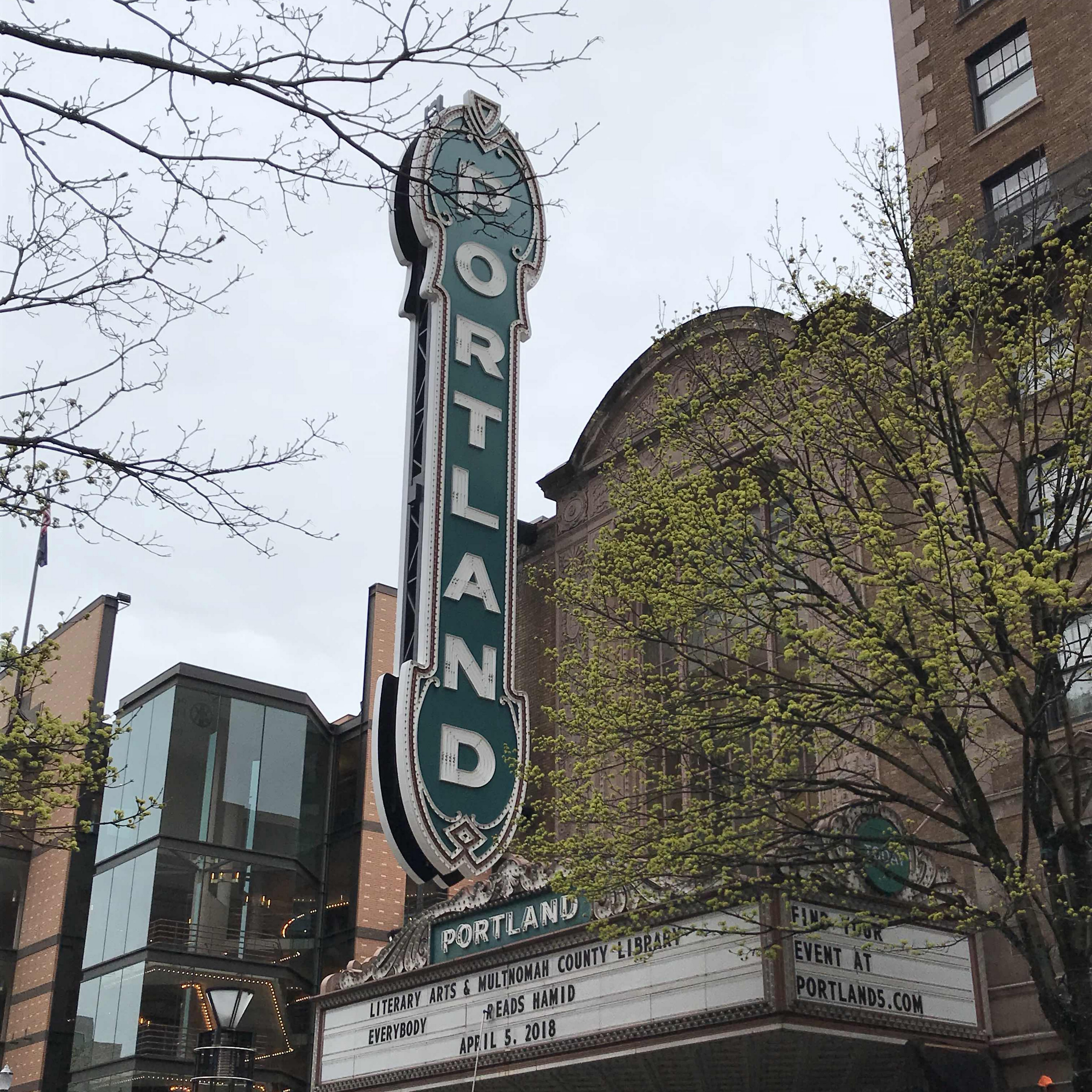 Good morning, Portland! Even though the forecast said that it was going to rain forever, it’s been dry today, and I even saw the sun a little bit. It’s such a relief to be able to be outside, after the biting Chicago cold! 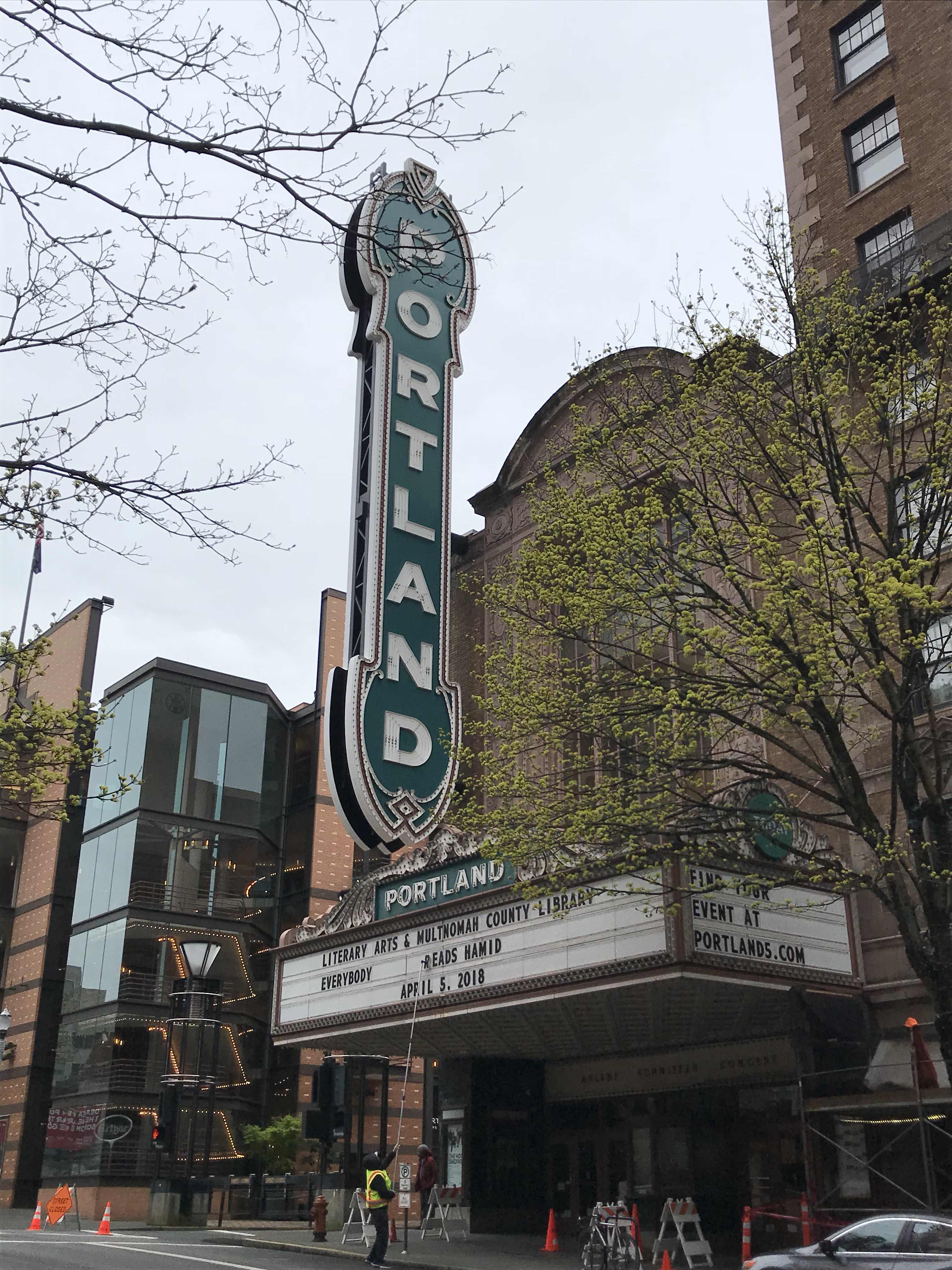 I began the day by walking south to the Portland Art Museum, which has a wing dedicated to ancient Asian art. Before researching this trip I wasn’t aware that there was so much Chinese and Japanese art in the Pacific Northwest, but if you think about it, this part of the US has always been directly accessible by sea from China and Japan across the ocean. Sure enough, in this museum they have plenty of statues, vases and funerary items that are almost two thousand years old, as well as more modern hanging scrolls and calligraphy. 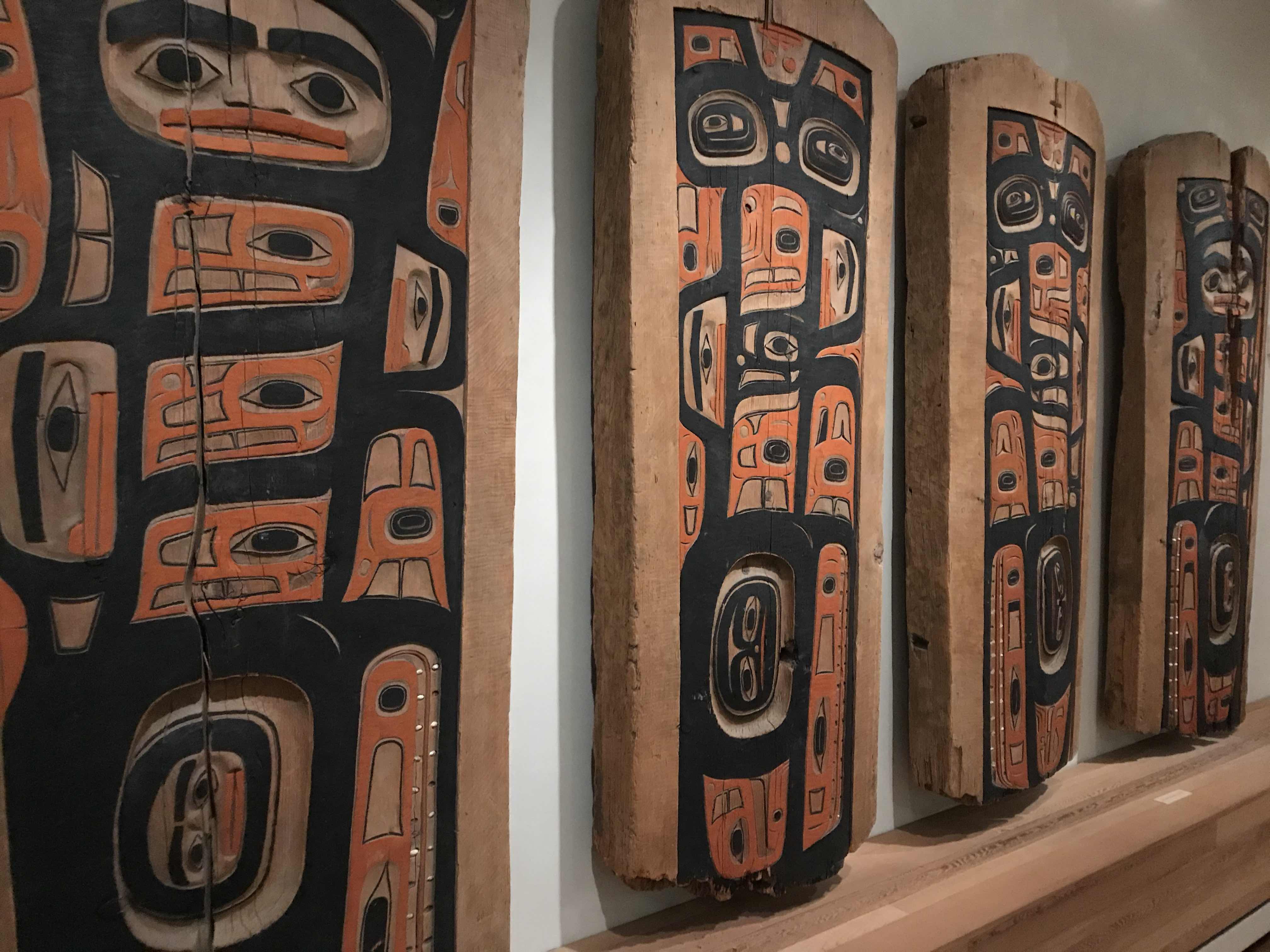 They also have multiple galleries focused on Native American art, with historical artefacts but also contemporary paintings and compositions. There’s a small section for European Impressionism too, where I was surprised to find a Van Gogh and several Renoirs and Monets, including some of his water lilies. It feels weird to find them so far from home. The Contemporary gallery, meanwhile, had a colourful painting by Kehinde Wiley, the artist who made Obama’s portrait!
I was delighted to find that the Art Museum had a large temporary exhibition dedicated to Laika, the stop motion film studio that made Coraline and Kubo among other movies. Turns out they are based in the Portland area; I had no idea! The exhibition is really cool: not content with showcasing the concept art and illustrations for the movies, they have lots of the actual props used during filming, including the real puppets of the aforementioned Kubo and Coraline. 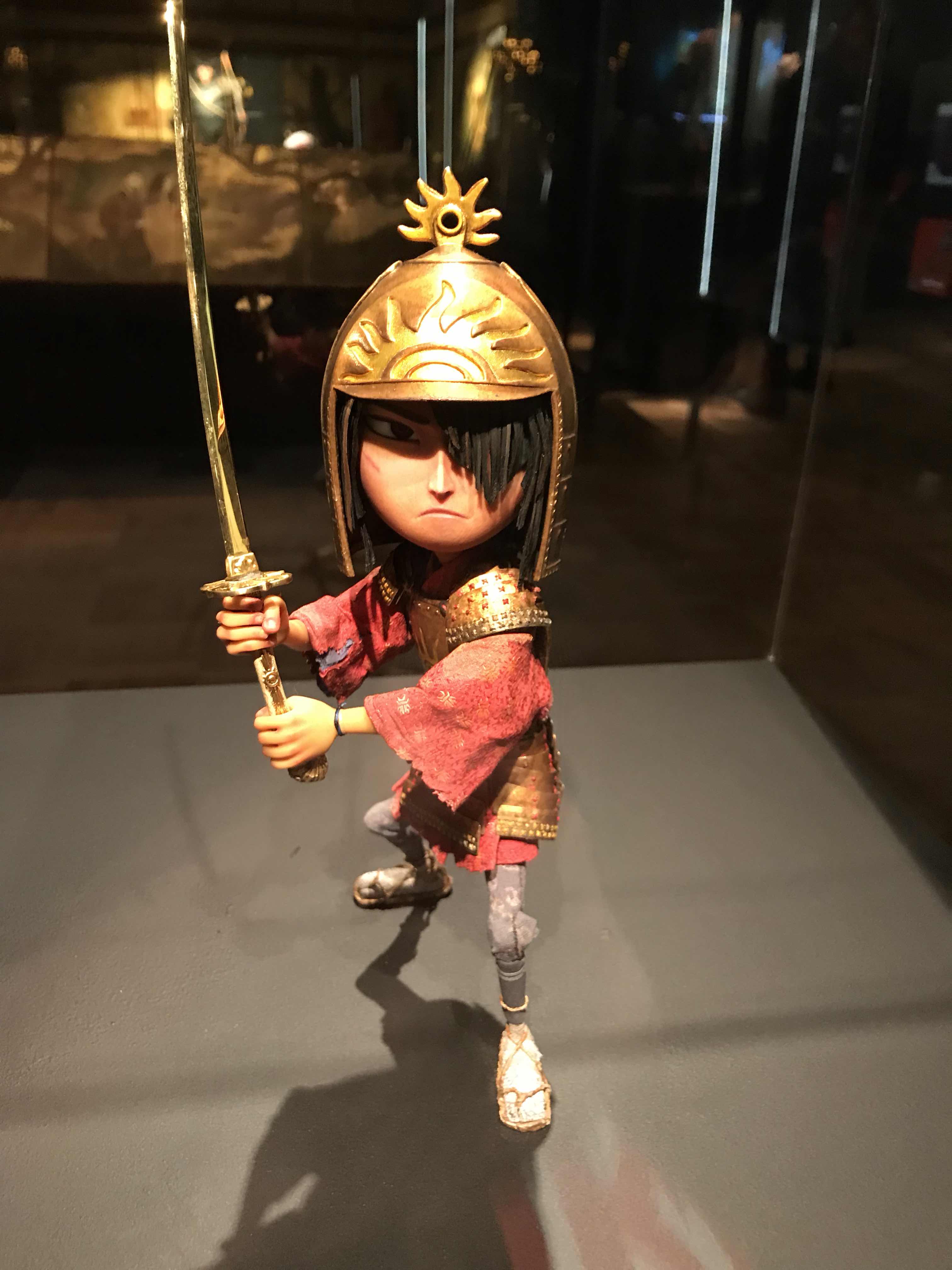 They also assembled full dioramas depicting a cart chase and a ballroom dance from other movies which I haven’t seen. When I return back home, I defienitely plan to catch up on Laika productions! I did recognise Coraline’s enormous house, or the creepy garden/yard with the shape of a face. There were panels with dozens of costumes for the puppets, spare pieces, explanations of how things were assembled and filmed, glimpses at some of the stop motion machinery… It’s an awesome exhibit, it really felt like the studio went all in when providing material. Very much recommended! 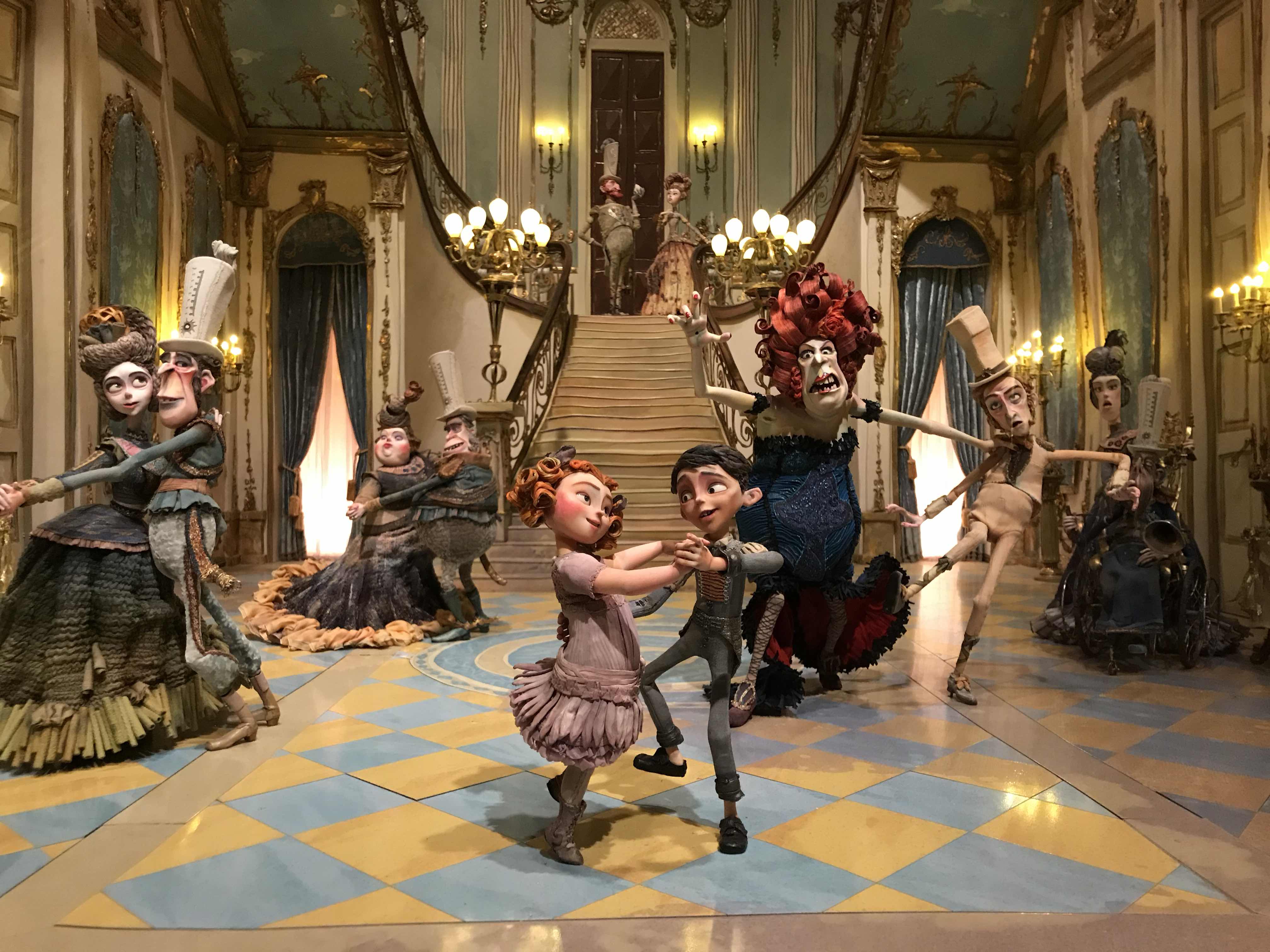 Apropos of nothing, everyone is so disarmingly nice here. People are always delighted to discover I’m foreign, although to my surprise, when I say I’m from San Sebastian, it’s been four times already that the other person knew of the city. It happened today at the museum, where I say “From San Sebastian” and start going off with “it’s in the north, in the Basque-“ when the girl behind the counter goes: “Oh yeah I did a study abroad semester in Santander”. The guy at the Driehaus museum had even visited!
After the museum, I walked just a couple of blocks to see Portlandia, one of the city’s icons. It’s this enormous statue of a scary crouching lady with a trident, officially the city’s mythical patron and a figure of commerce. You won’t see it on any guidebooks, though, because the sculptor owns the visual rights to his creation and doesn’t allow any commercial use of it! So no souvenirs with Portlandia either! This media blackout was all the more reason for me to want to see it, but my heart broke clean in two when I arrived at the Portland Building and found that the statue was covered for construction! The whole façade is apparently being renovated through 2020… I was so disappointed! 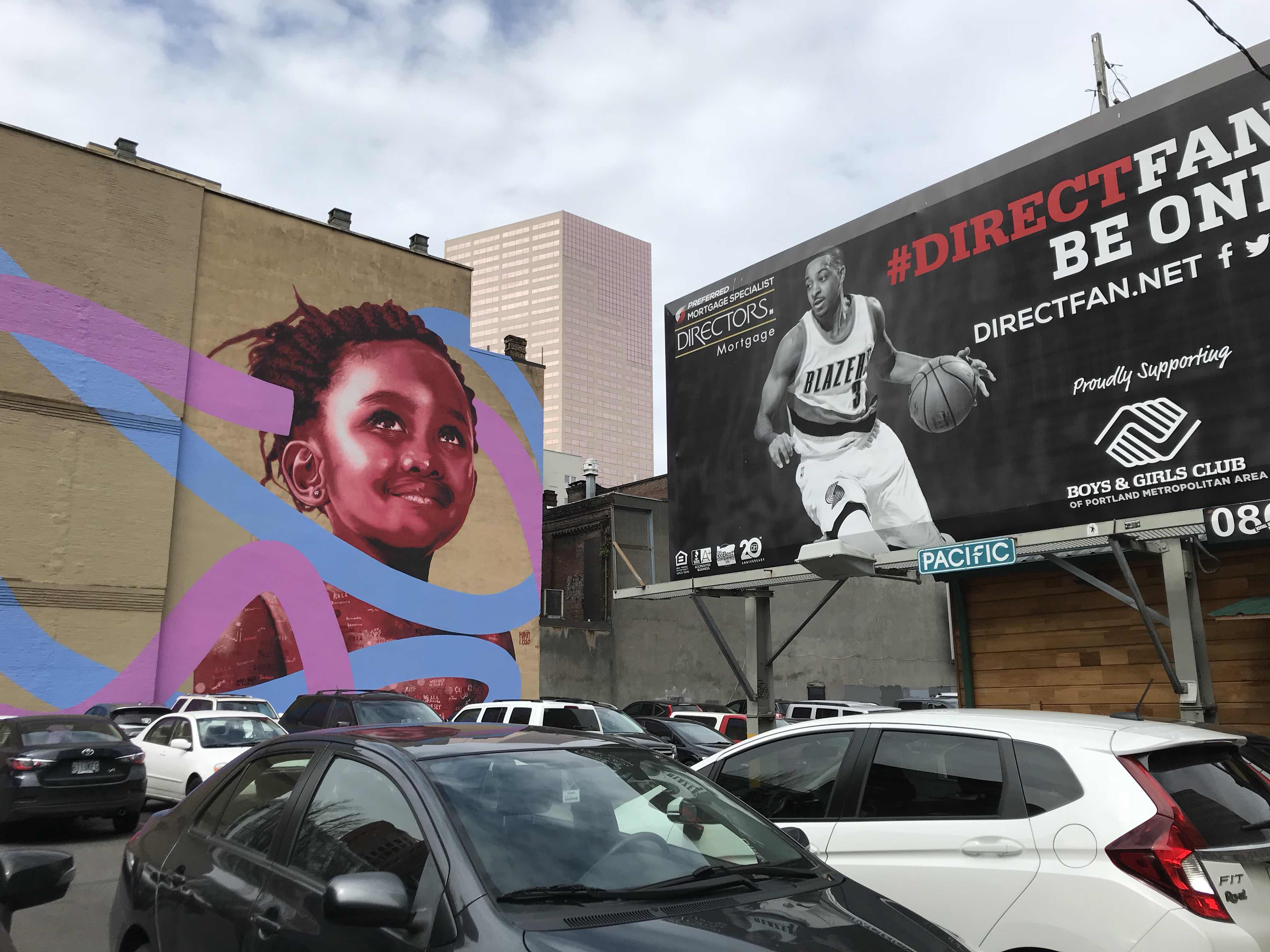 I ate my feelings at Mother’s Bistro, a very nice restaurant with different menus for breakfast, lunch and dinner; loved the Sherlock-style wallpaper and shirts that read “Call Your Mother”! I kept walking north. There are some nice design stores, old-timey marquees and signs, and street art adorning the walls of parking lots, but around Chinatown some streets take a turn for the worse and I could see more and more homeless people around. I didn’t feel unsafe at all but clearly some areas are not as prosperous as others. I emerged next to Voodoo Doughnuts (note the full spelling), a very quirky but massively popular donut shop that opens pretty much all the time. I may have given it a go, but there was like a 30-people queue outside! On the one hand, I don’t want to queue for dessert, but on the other, there’s gotta be something about those donuts, right?! Maybe tomorrow before leaving.
My afternoon visit was to the Lan Su Chinese Garden, which was designed and built in partnership with Portland’s sister city of Suzhou (the name Lan Su is formed by syllables from each city’s Chinese name) using Chinese construction materials and plants. 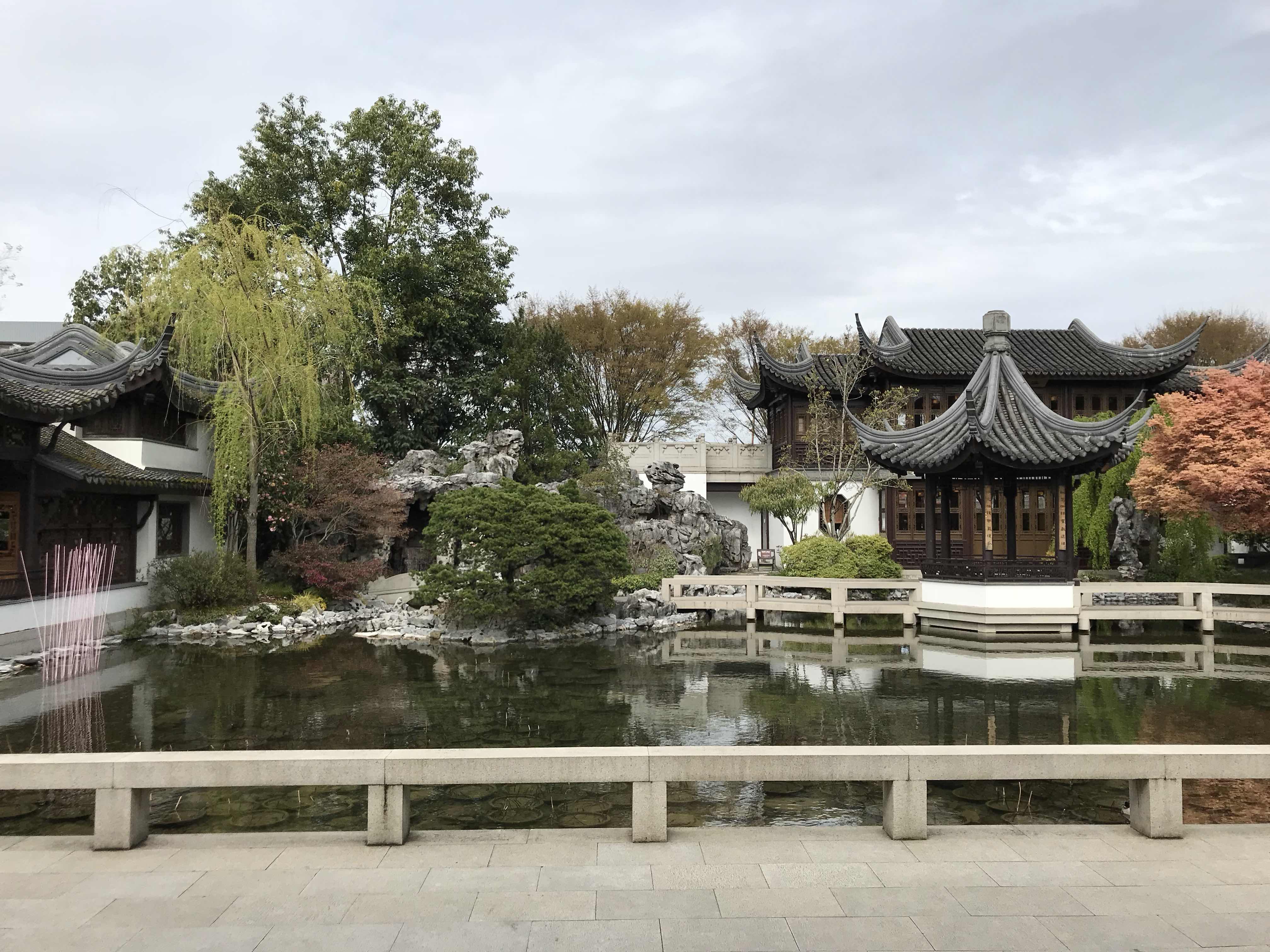 Where the Japanese garden was serene and comforting, Lan Su is nothing short of spectacular, a picture-perfect recreation of a 16th century merchant house garden. The different sections are laid out around one beautiful pond, lazily inhabited by ducks, carps and goldfish. It’s got a moon pavilion (so called because when you’re in it at night you can see the moon’s reflection on the water), a tea house, a bridge, a family lounge, a study… 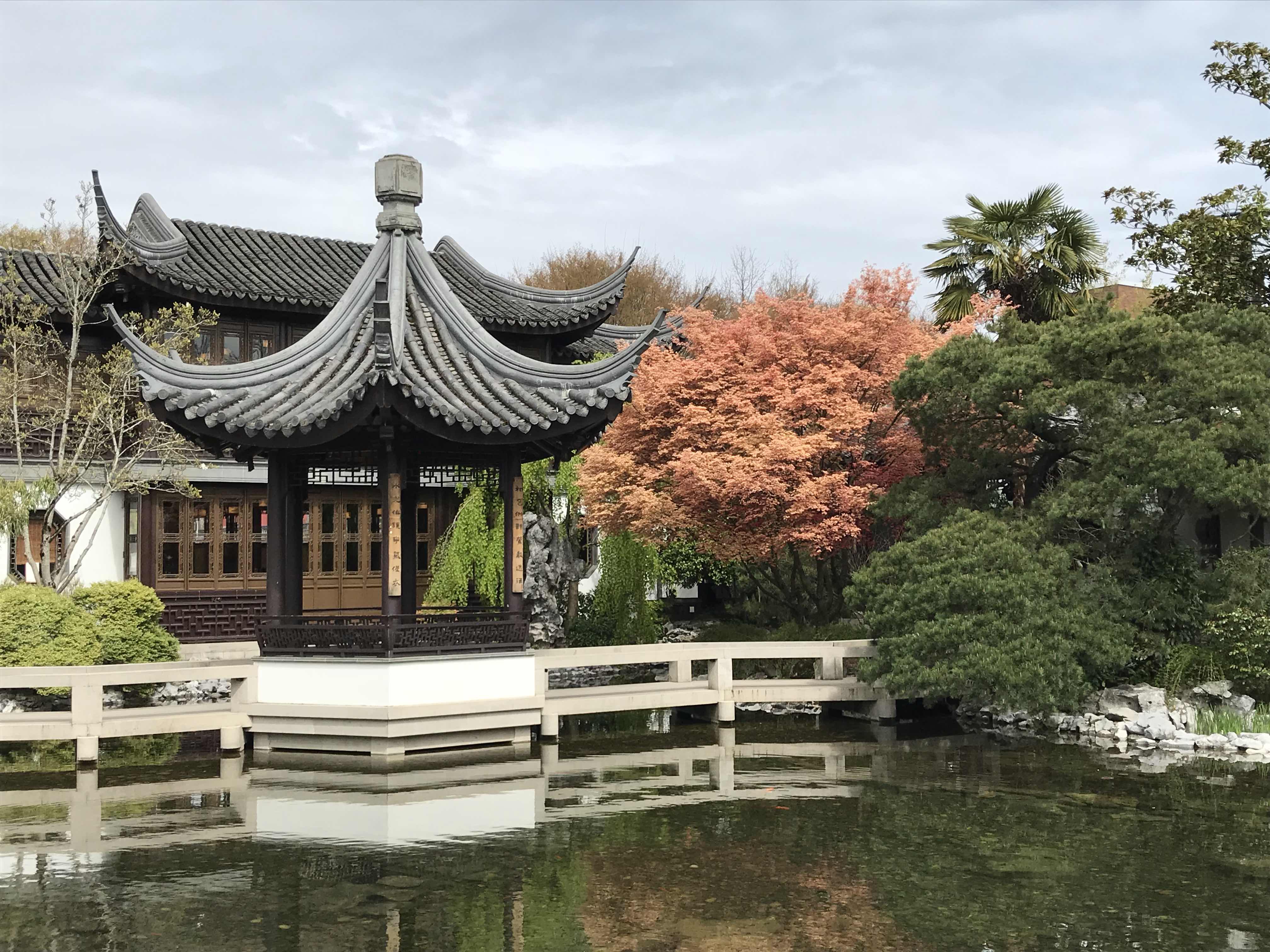 It never ceases to amaze me how Japanese and Chinese gardens can make so many different ambiances out of such little space. By contrast, a European garden would probably all be open, so it would be one big area that you could see at once from the entrance. Here, I discovered a new perspective, a new scenery every time the path took a turn. (There was also a really worrying sign at the entrance warning us that there’s a blue jay nesting in the garden who will occasionally attack visitors. Um, can I rent a helmet?) 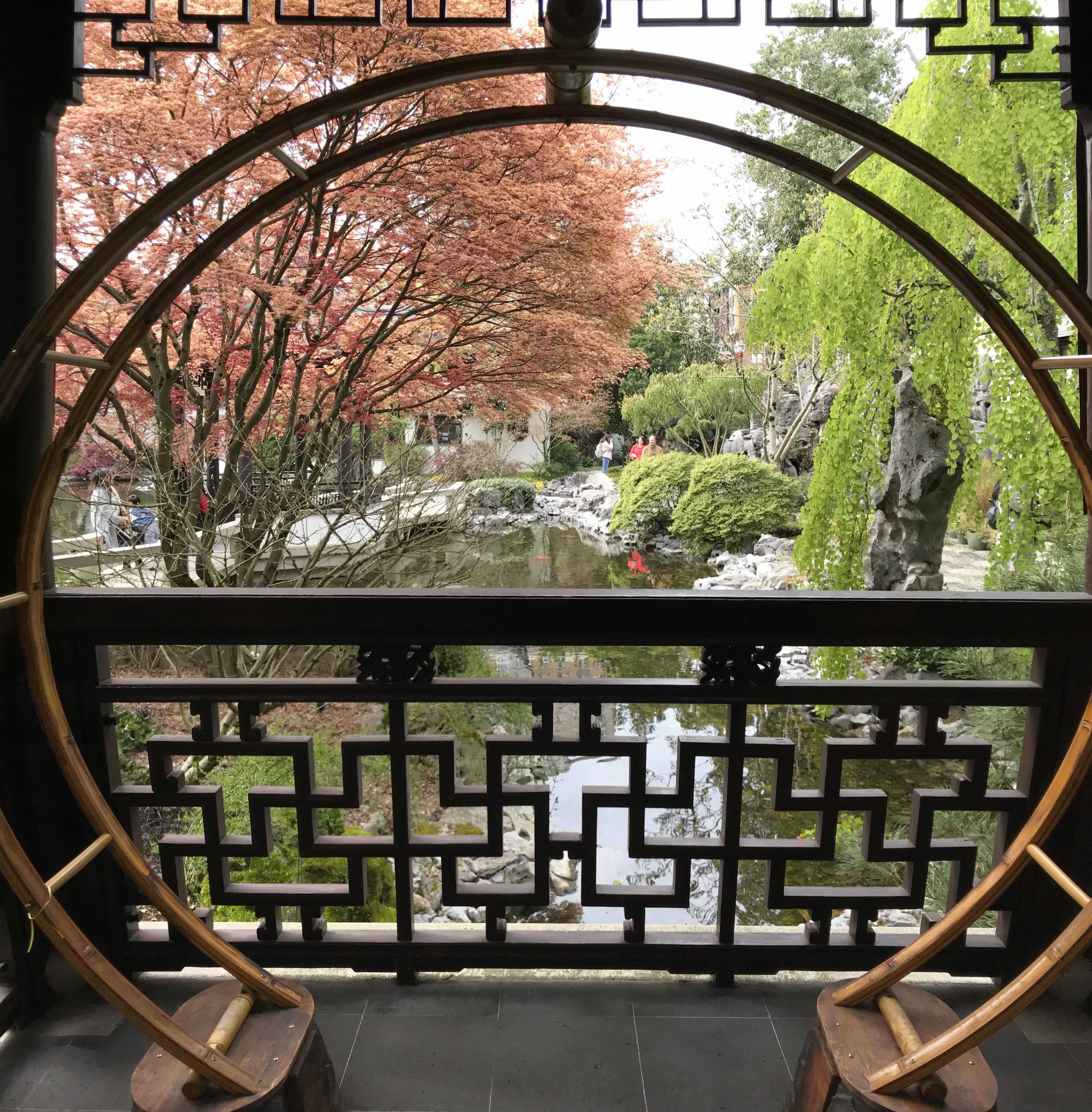 To make up for my earlier bad fortune with Portlandia, here in the garden spring had fully blossomed, and there were flowers everywhere. Trees, plants, bushes, all had flowers or blossoms of different shapes, sizes and colours. If only I knew more plant names to tell you all the different varieties! The only downside to the garden is that it’s in the middle of town, which is convenient, but it also means the high rise buildings break the harmony a bit, and there’s a road with traffic literally on the other side of the garden wall, so you could hear cars and honking. But it’s still very much worth the price of admission ($10), and seeing both the Chinese and Japanese gardens in Portland was a truly unique taste of the Asian influence over the American Northwest. 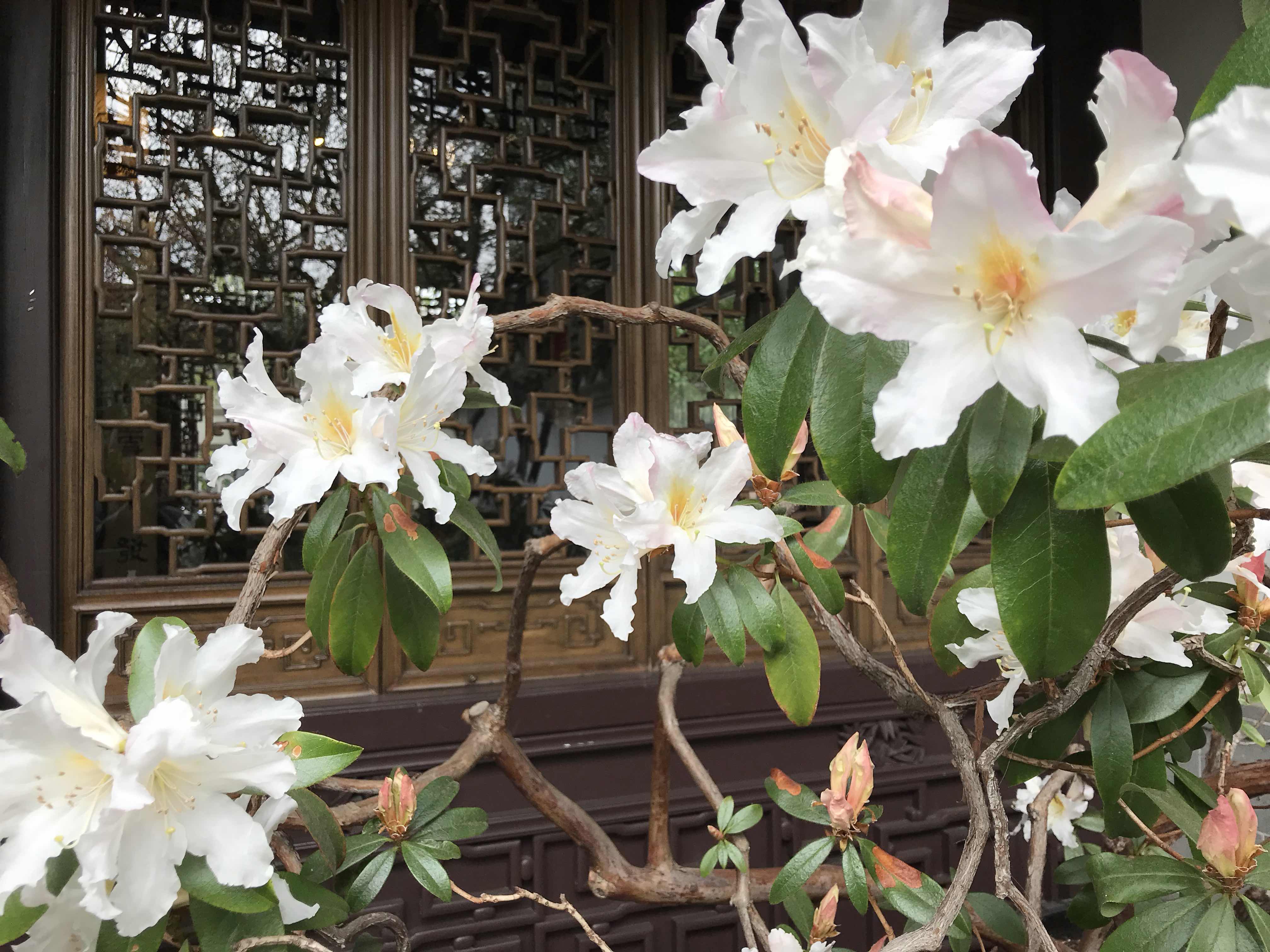 I returned to the hotel to rest before going out to see And So We Walked, a one-woman show by a Cherokee artist called DeLanna Studi. She talked about her life and her family through a journey she undertook with her father. They traced their family’s origins to North Carolina, from where their ancestors were expelled by Andrew Jackson’s removal order (against a decision by the US Supreme Court, I learned) and led along the Trail of Tears to Oklahoma. Along the way, she and her father stopped at different Native American enclaves where they learned more about their family and met other descendants who were also looking for answers. Clocking in at over two hours, it was a bit long, but it was a fascinating look at what it’s like to grow up Native American today, and if you learn a little from a story and you get to see the world through someone else’s eyes for a bit, then there’s little more to ask.
It was a productive day in Portland, and a good thing too, as tomorrow I have one morning to play with before I take my train to Seattle!