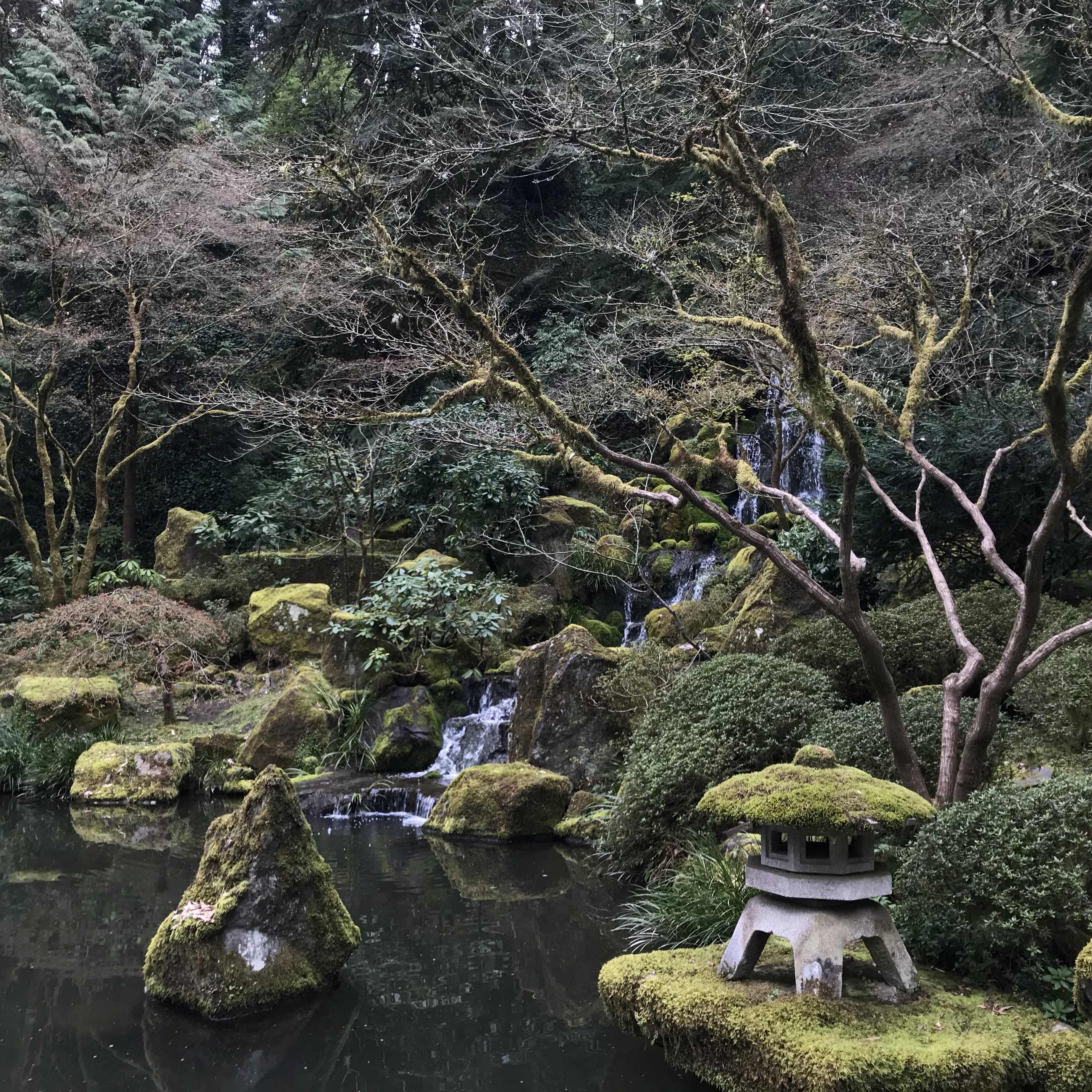 It’s travelling time! Today I had to leave our Chicago apartment at an unspeakable hour, because I was due on the 10:00 plane, and I hadn’t accounted for the hour and a half the trip would take me (it’s around 45 min just from downtown Chicago to O’Hare, and you have to get there first).

It’s a long flight, four hours and change, although part of it is offset by Portland being two hours behind in terms of timezones. The first impression I got from the plane was that the city is surrounded by wilderness: from the sky I saw a very mountainous landscape, vast stretches of forested mointains and rivers that seemed mostly untouched by civilization. When I got off the plane at the airport, all the shops and cafés seemed Oregonian, as opposed to the multinationals you see in most airports; or at least, they all had “Oregonian” in the name! And the airport buildings had trees on the street and plants hanging from the parking floors. It’s probably confirmation bias, but I took them all as the first signs of Portland’s personality!
I took the MAX train downtown (a flat fee of $2.50, transfers included), which took around 40 minutes, and walked a little bit to the Crystal Hotel. Looking to enjoy as much of Portland’s famous quirkiness as possible in my two short days here, I booked this place where each room is painted to evoke a different song played in the city over the last century, the lyrics painted on the walls like a frieze. My room is themes after “Who do you love”, by Bo Diddley; there are others for Blondie, Modest Mouse, Merle Haggard, James Brown, Allen Ginsberg, Marvin Gaye… The city’s unofficial motto, by the way: Keep Portland weird!
I had a quick lunch at nearby deli Kenny & Zuke’s (it was 14:00) and then had to decide what my first plan would be. It wasn’t raining, and the forecast says it’s going to rain from tomorrow until I leave the country, so I seized the opportunity and took a bus to the Portland Japanese Garden. In the bus, everyone says hello to the driver when getting on, and then goodbye and thanks when getting off! I am not used to such levels of friendliness… 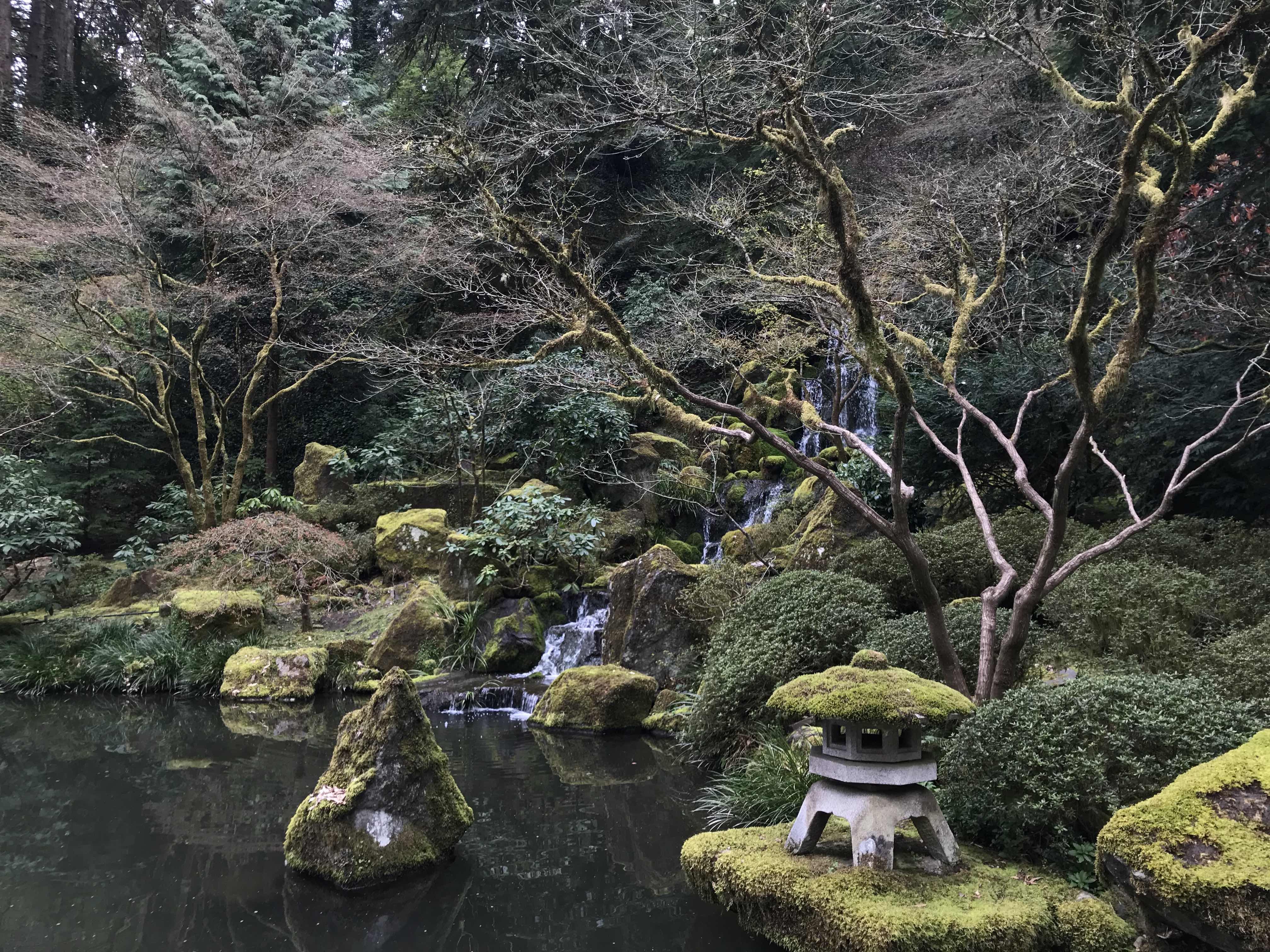 So here’s the story: for the longest time at home our computer background was this beautiful picture of a stunning autumnal Japanese maple tree. I don’t know who took it or where we got it from (probably it’s one of the default options?) but we always assumed the tree was somewhere in Japan. Well, when I started researching this trip, imagine my surprise when I saw the tree’s picture in the guidebook for Portland, Oregon, of all places. I had to see it for myself!
I wanted to go just for that reason, but it turns out that the Portland Japanese Garden is a fantastic visit in its own right. It’s a bit difficult to find, following a maze of meandering paths in the hilly Washington Park, with no signs pointing to it until you’re pretty much at its doorstep, but if you find your way your reward is the astonishing image of the modern reception building jutting out from the top of a hill, surrounded by tall pine trees. 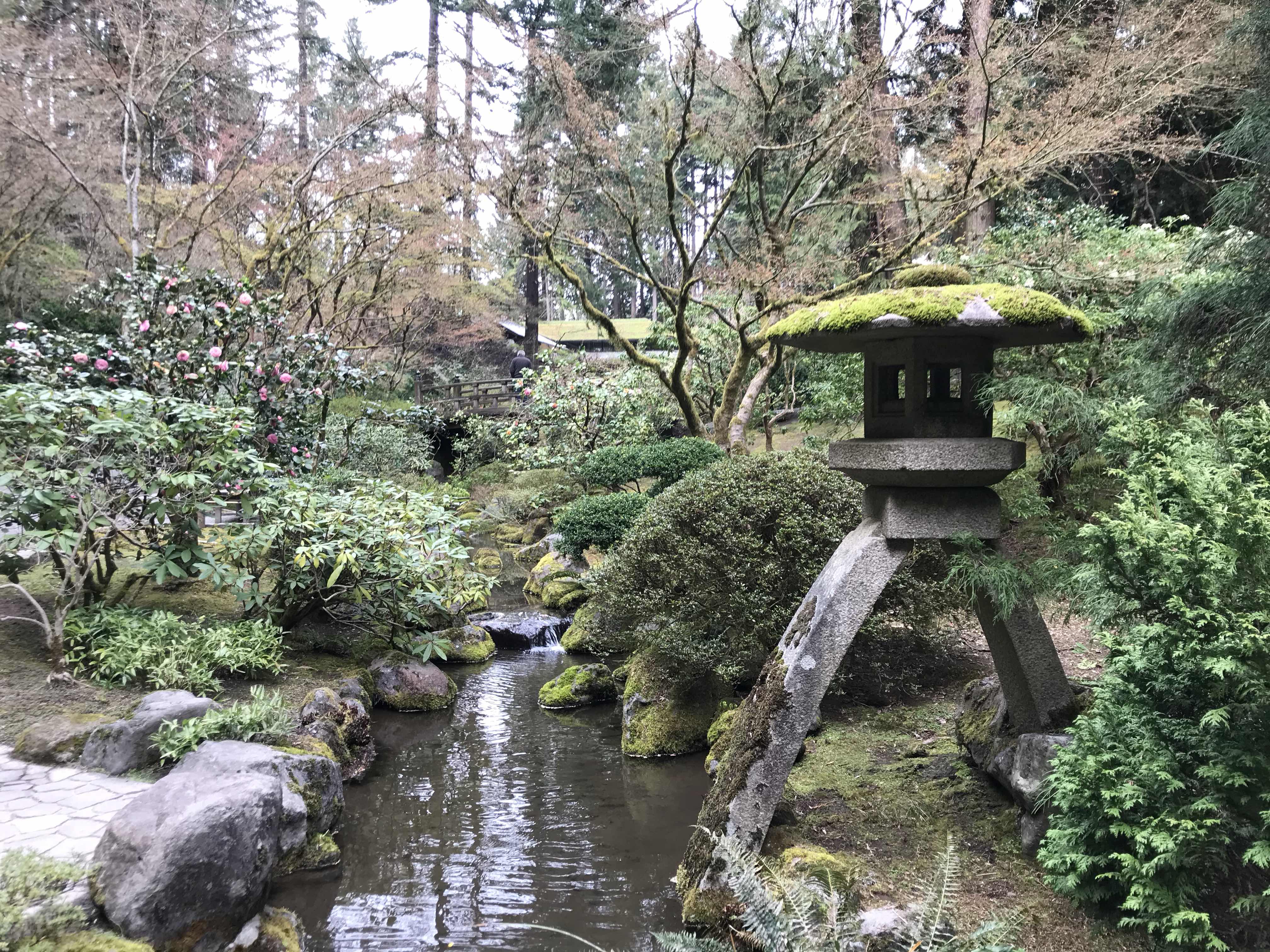 The garden is divided in several distinct sections, including a small rock garden, and a tea pavilion, but the most attractive is of course the strolling garden around the koi pond. Like all the best Japanese gardens, this one is expertly designed to appear natural and unforced; it can stand up to any garden of similar size you can find in Japan. There’s a moon bridge over the pond, a waterfall, stone pagodas, koto lanterns, maple trees… and, by a stroke of luck, the cherry trees were in a spectacular full bloom today. Most were a soft pink, but in contrast there was one that was crisp white; it felt as though I could grab a branch and it’d turn to snow in my hand. 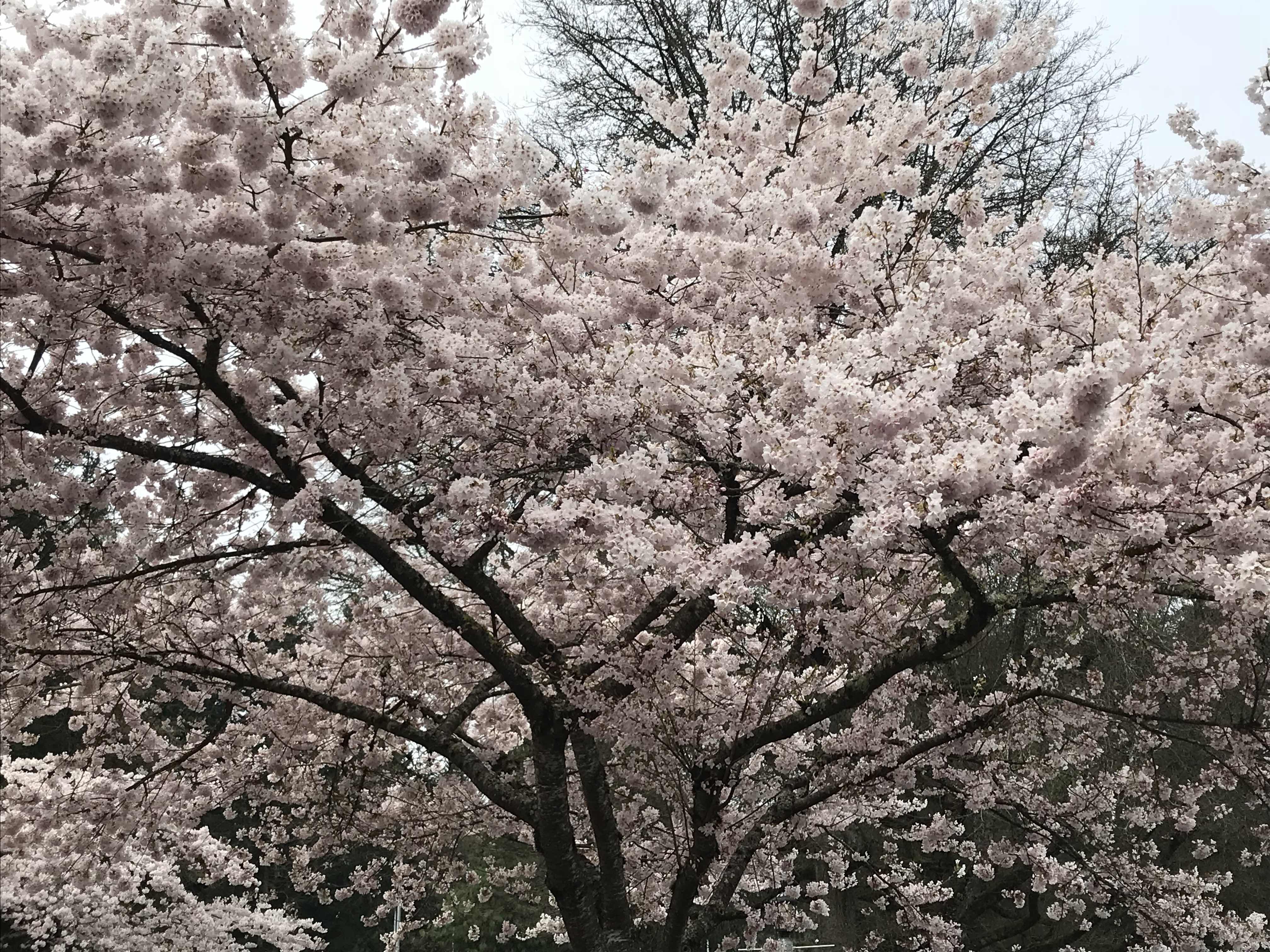 I wandered around the garden, crossing bridges and stepping on stepping stones, looking at the koi and the cherry trees when not distracted by the giant pine trees all around us. There were a few people coming and going, but it was pretty quiet. It took me two full rounds of the garden to find the exact maple tree I was looking for, because it’s way smaller than it seemed in the picture, and its branches were bare, but the shape is very unique. Mission complete! 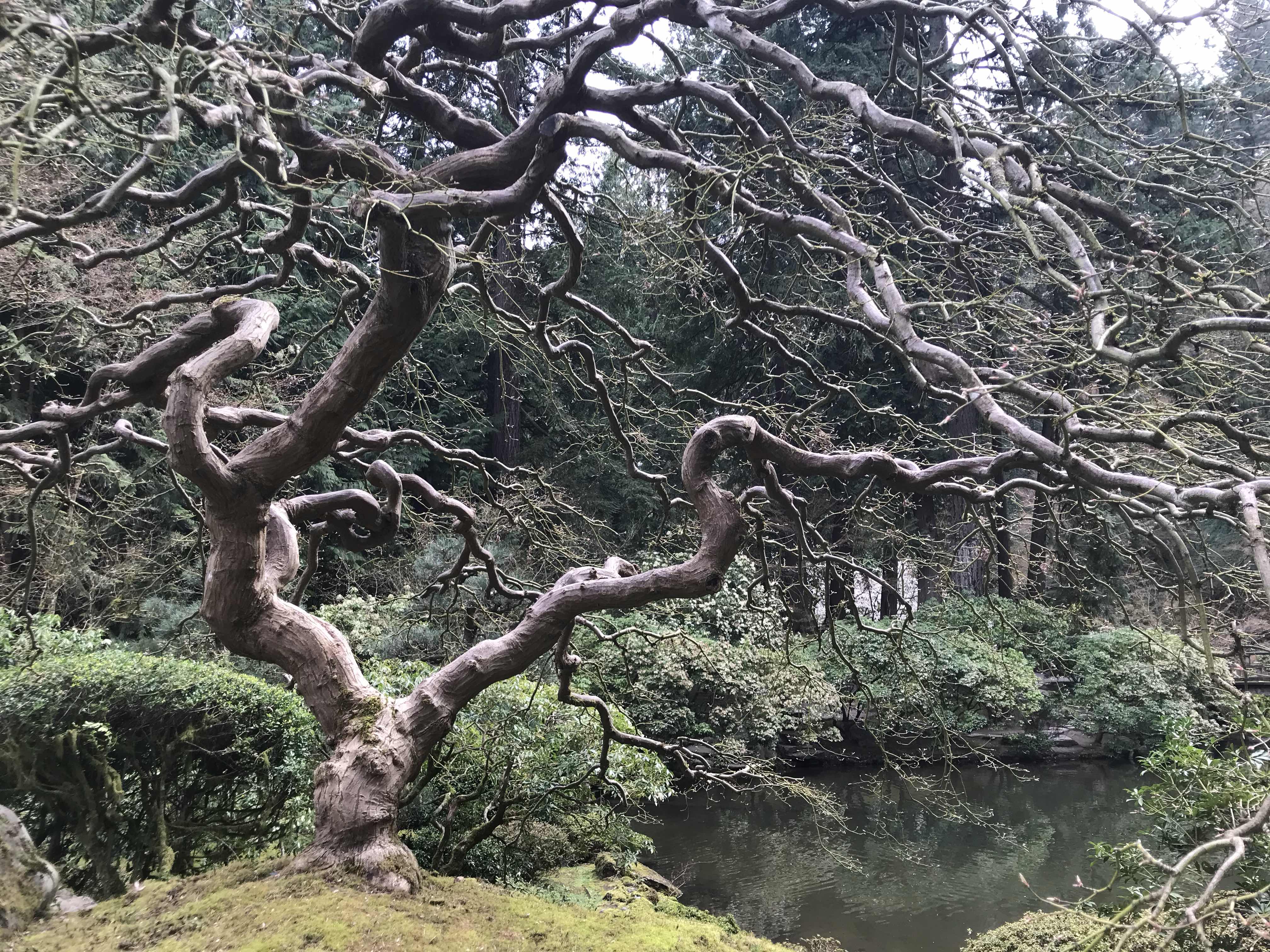 If you come visit, and you should, don’t miss out on the gift shop! They have awesome omiyage imported from Japan; it’s immediately recognisable as an authentic Japanese boutique because it just oozes good taste. I got myself a pair of red chopsticks, as over the years chopsticks have emerged as the most common souvenir I end up bringing home. Understandable from Japan or Vietnam, but odd from Savannah, Georgia!
Things got a bit hairy when time came to return to the city, as in my enthusiasm to photograph everything I’d let my phone almost run out of power. This meant I couldn’t call an Uber (I was afraid my phone would die before the car ever made it all the way up the hill) and my bus ticket had expired (I don’t know if you can buy them from the driver). So I began retracing my steps back down the hill, convinced that I would come out the other way and get irreparably lost and then I wouldn’t be able to look up the way back! In the end though, I managed to return to the city, and once on the streets I was able to follow the long avenue the bus had taken on the way out. I probably walked no more than twenty minutes to get back to the hotel, so it wasn’t that bad. 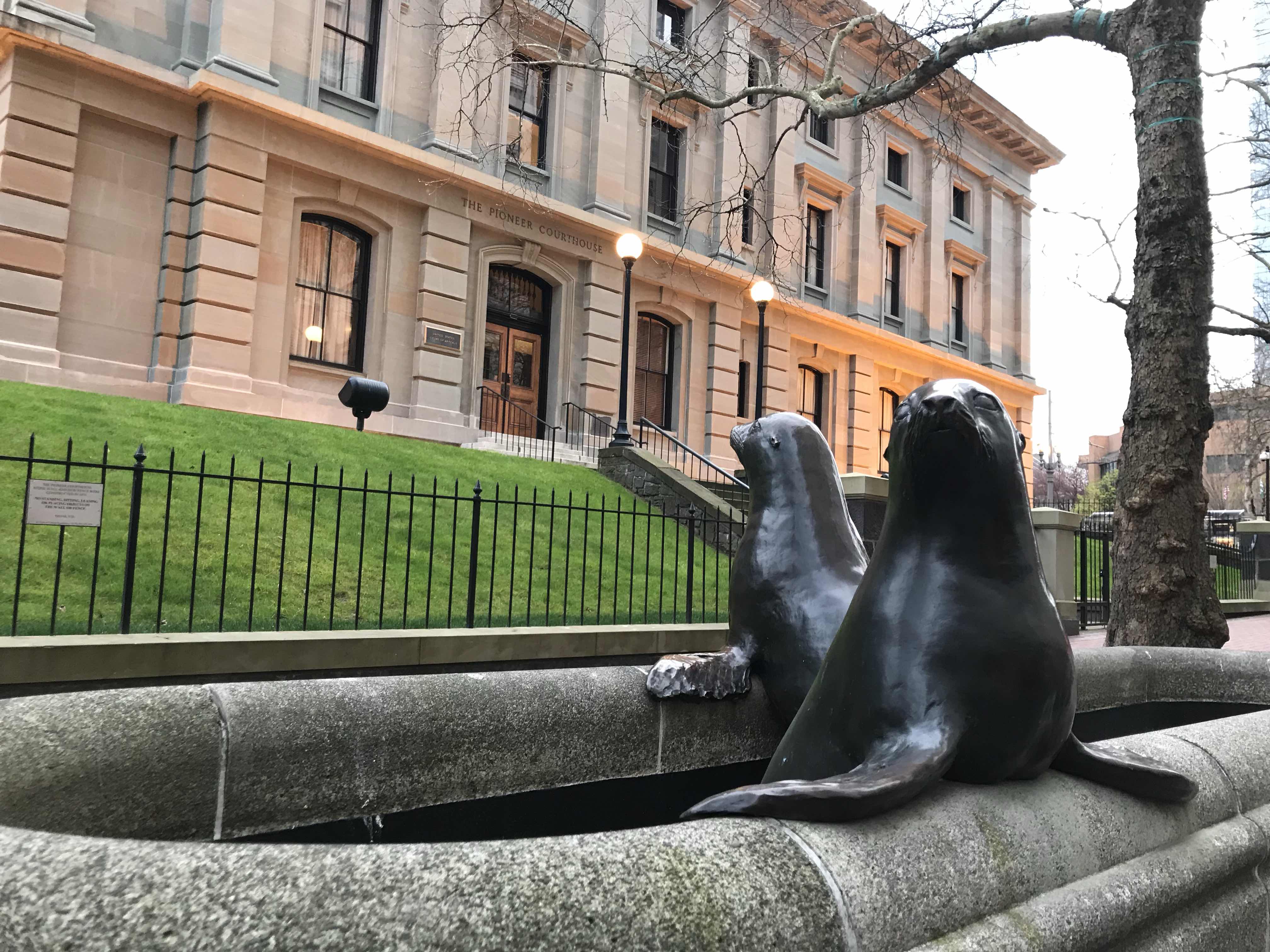 I rested my feet for a bit at the hotel, then took a short walk down to Pioneer Square, tossing different itineraries and plans for tomorrow in my head. Even from these few hours I can see the charisma and personality of Portland coming through: from all the different murals, the many different urban tribes (I’ve crossed goth couples and fancy businesspeople and lumberjack hipsters and sporty tracksuits just in the last hour), the local restaurants and shops… 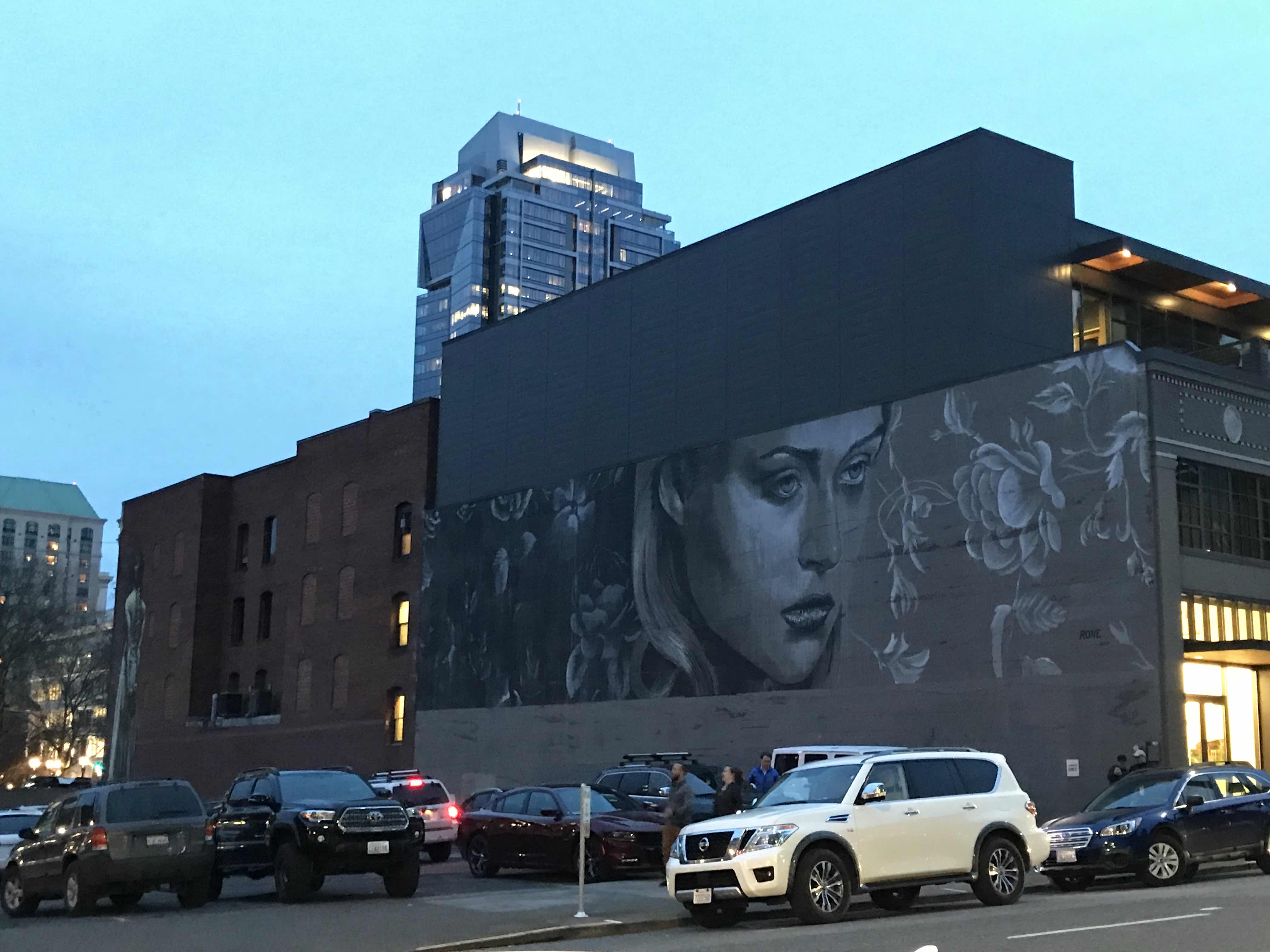 One such local treasures I made sure to drop by is Blue Star Donuts, a donut mecca with none of the typical varieties but lots of innovative ones: spicy Mexican chocolate, blueberry bourbon vanilla, passion fruit and almond… Vive la difference! I got myself a lemon poppy buttermilk donut. It’ll be my reward for finishing this entry! (I’m not trying terribly hard to come up with an excuse…)

1 thought on “Arrival in Portland: the Japanese Garden”