Day trip tiiiiime! After a couple of very intense days of urban exploration, today we took off to visit sleepy Oak Park, a small town on the outskirts of Chicago with two illustrious natives: Frank Lloyd Wright and Ernest Hemingway!
Oak Park can be easily accessed from downtown Chicago, as it’s on the very last stop of the Green line, and since the CTA operates a flat fee system, an L ride is always $2.50 regardless of where you go! No need to memorize different zones, or even to calculate prices based on number of stops like in Tokyo! The only downsides are that it does take a while, and that the Green line crosses Austin, which is allegedly a dodgy neighbourhood in Chicago, but on a Saturday morning there were few people around. Just, be prepared to see derelict houses and boarded up doors (remember The Wire?) from the train before the scenery gets suburban again.
Once we got off at Harlem & Lake, in downtown Oak Park, it was about 11:30 so we headed straight into a nice café next to the station for a little pick-me-up in the shape of homemade(-looking) cookies. The centre of town was small but lively, with lots of independent stores and restaurants. We walked up to the visitor centre, where a Cuban lady explained the sights to us in heavily accented Spanish (naturally, to her it would be our Spanish the one that was heavily accented!). I don’t think we have spent a day here without finding Spanish speakers, whether it’s at the museums, in shops or restaurants. It really is remarkable. It’s lovely to hear all the different Latin American accents, and it’s a little bit of bonding when we share a language surrounded by strangers.
So the deal with Oak Park is that famous Prairie School architect Frank Lloyd Wright was based here for some time, and so the residential neighbourhood boasts several family homes designed by him in his own groundbreaking style. They are private residences, so you have to enjoy them from the outside as you walk around the area. It’s a fantastic way to spend a morning, partly because of the Wright houses but also because of all the others: there are homes of every shape, size and colour, from stately mansions to cute gingerbread cottages. It was windy and chilly at the beginning of our walk, but the sun began to shine towards the end, reducing the urgency in our step. 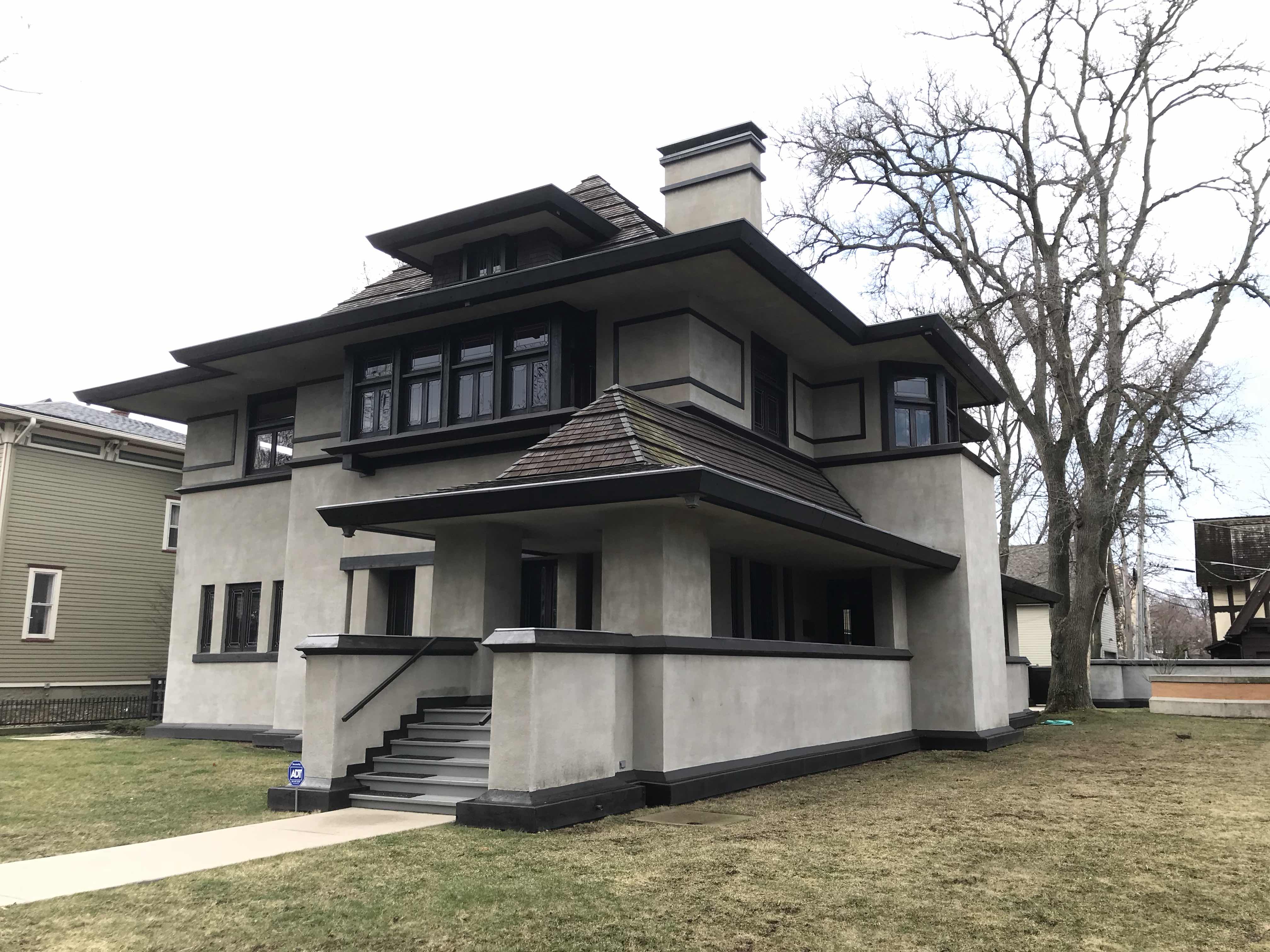 There are two places you can visit: the Frank Lloyd Wright studio, which is inside one of the homes in the residential area, and the imposing concrete Unity Temple, a nondenominational church south of the train tracks. The former had a couple of hours’ waiting time for a tour and the latter was closed for services (it is still a functioning church), so we didn’t visit either. We were happy just to keep gawking at houses from the street! 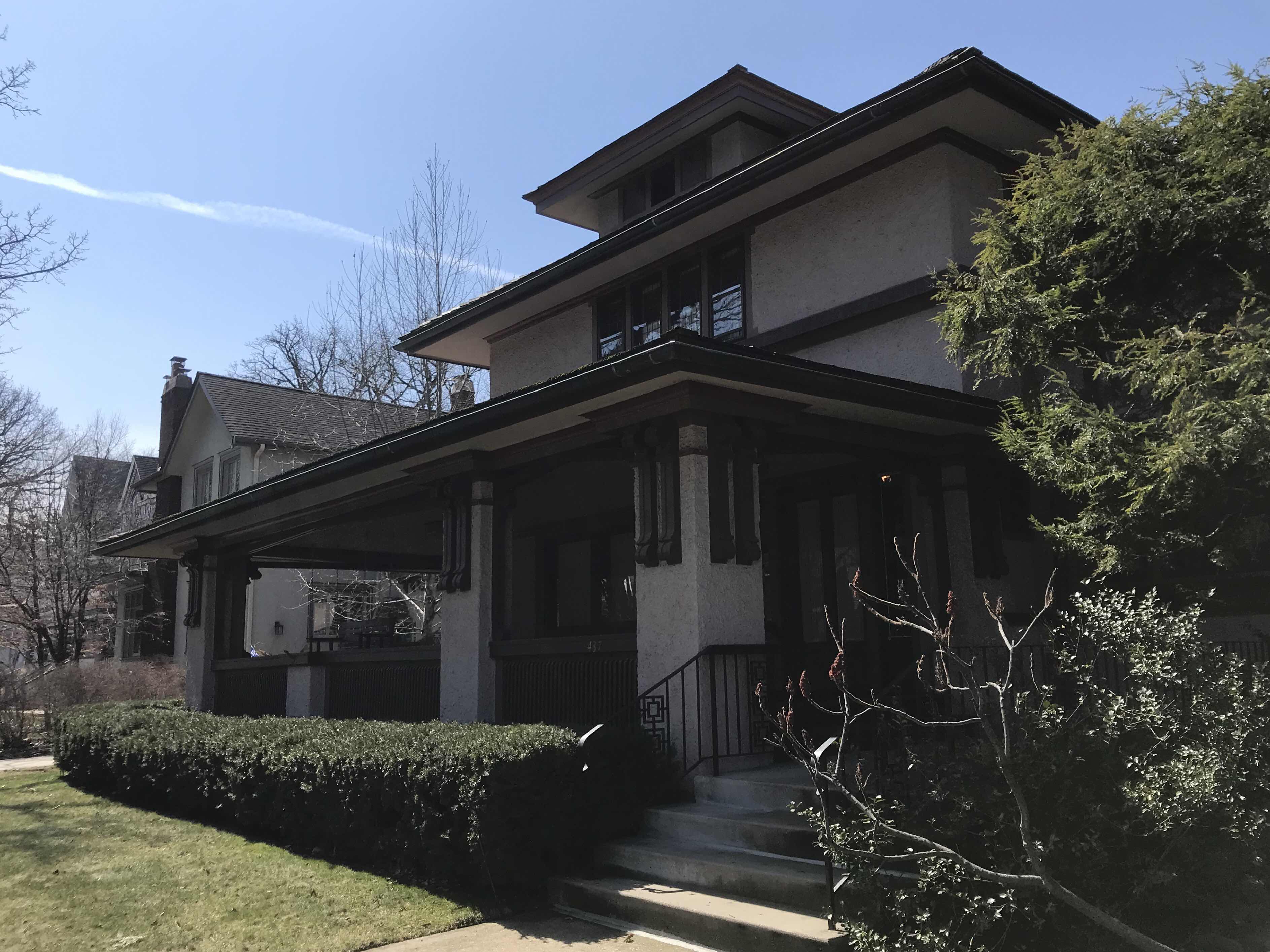 The other Oak Park claim to fame, Ernest Hemingway’s birthplace, is a small, unassuming but charming house distinguished only by a sign bearing the writer’s name. We did peek inside, but at $18 for a small house we thought the price a bit steep. It did feel fitting that we came here after Hemingway went to Spain! 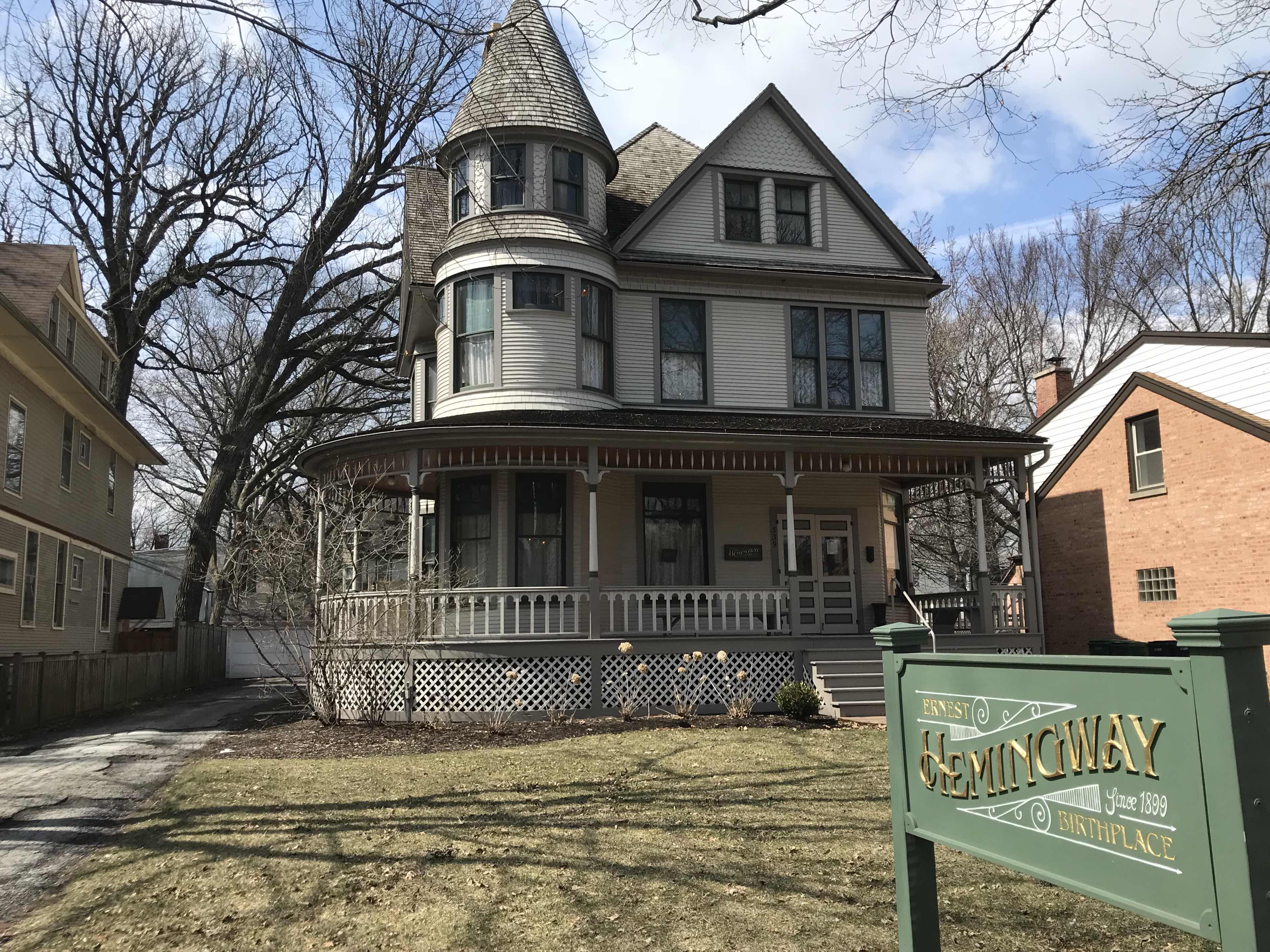 After zigzagging all over the neighbourhood checking out colourful houses (the ones designed by Wright are helpfully pointed out on Google Maps; I reiterate that a data plan is the best purchase you can make on a trip) we walked back downtown for lunch. It’s starting to get to that point in the trip where we’re looking out for opportunities to sit down for a spell. Even though we ordered sandwiches, the food was still plentiful and we barely made it through! 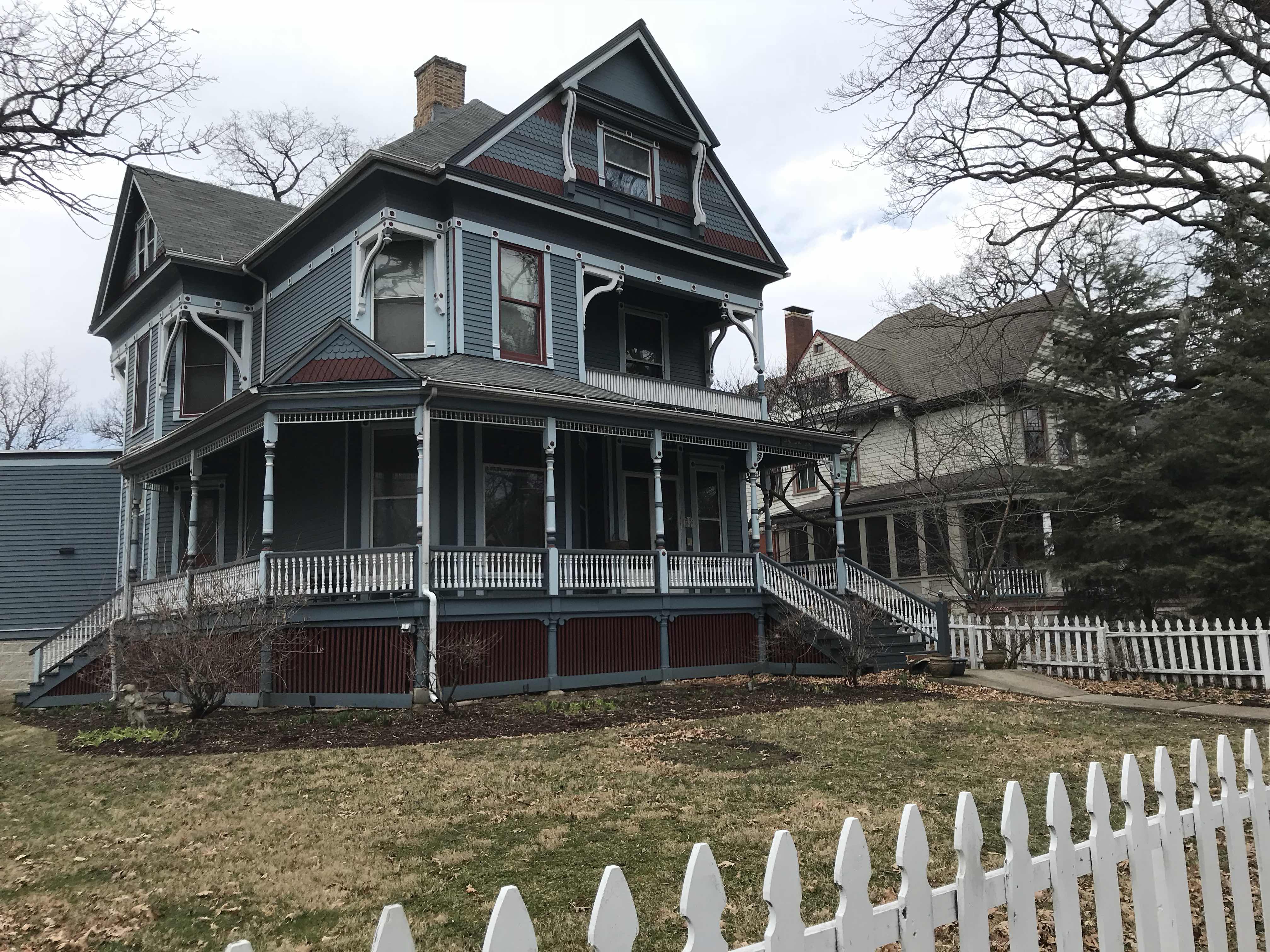 We only had one thing left to see in Oak Park: the modestly named Pleasant Home, a Prairie Style mansion in the middle of a park, designed in 1897 not by Wright but by one of his contemporaries, George Washington Maher as a family residence. It is discrete, not to say nondescript, from the outside, but it’s gorgeous on the inside. Turns out that if you visit on a weekend, from 14:00 to 16:00, you can forgo the guided tour and pay just $5 to walk around at your own pace. The interior looks ripped out of a period film: wooden panels, painted frescos and friezes on the ceilings, original 19th century light fixtures all around… Definitely worth a fiver! Pity that there is no photography inside…
A very productive day trip to Oak Park, except we weren’t quite done for the day, so after resting on the L ride back downtown we got off in the Loop and walked into the Chicago Cultural Center, a former library now converted into a multi-purpose exhibition space. Again, the draw here is the space itself, done in Art Déco mosaics and fixtures, especially a gorgeous Tiffany glass dome on the third floor. 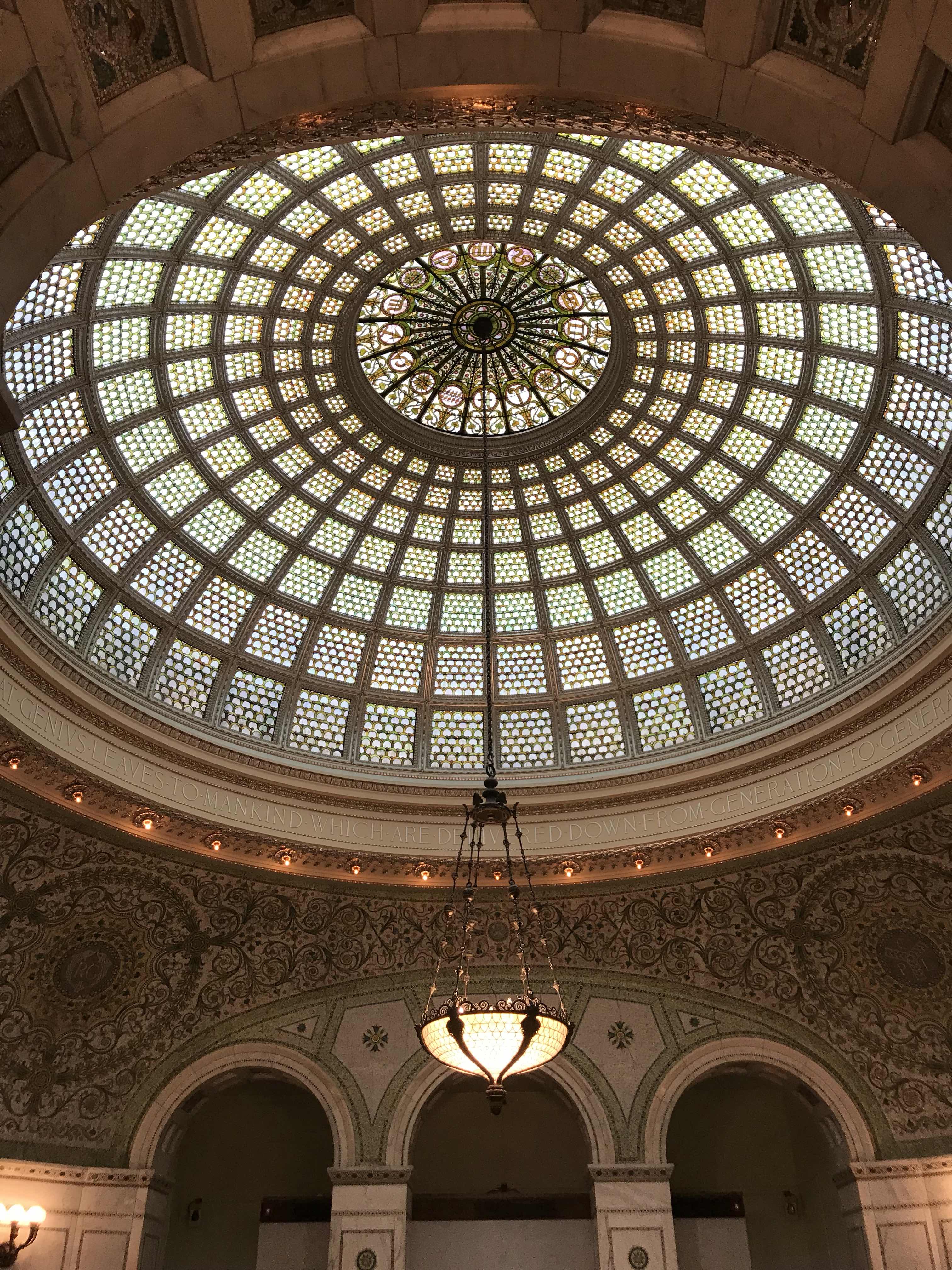 They also had a mural by Keith Haring -did not know he was from Chicago- in a beautiful antique showing room: 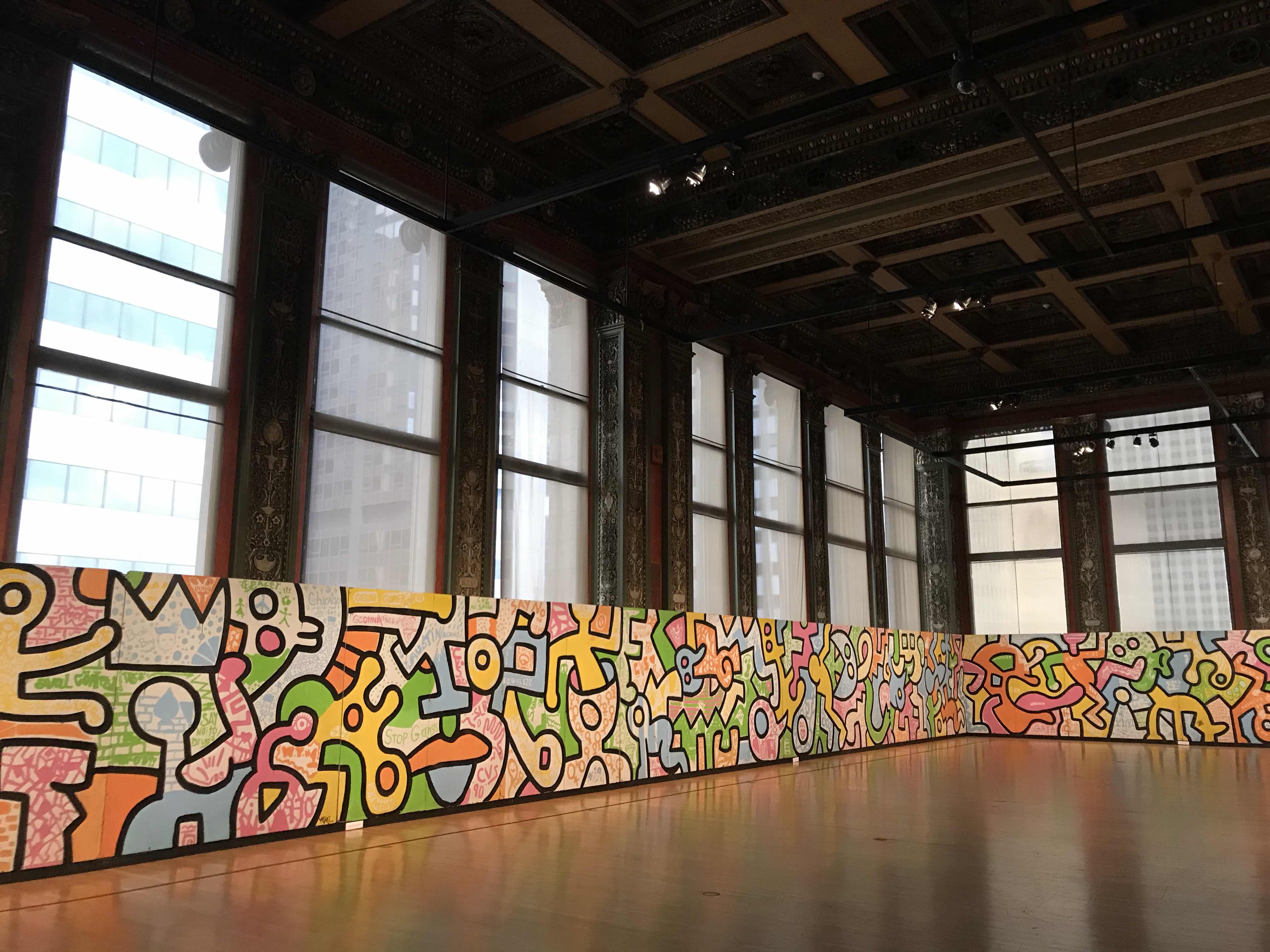 Now we were done for the day… except… what if we tried to catch a show? There’s one of those half-price ticket booths near Millennium Park. Like most such business in other cities, we found that these are not nearly as cheap as they flaunt themselves to be, so I exercised some of my theatre wiles developed after years of trying to catch sold-out shows in London, and… went to the theatre itself to ask if they had any day tickets. Sure enough, they had tickets for tonight’s performance of the Gloria Stefan musical, for $25 (vs. $60 at the “half-price”), orchestra seats. Sweet! Whenever you want to see a show, always try the venue first. So now we’re making time until show time. Another successful day in Chicago!