After our walk around the Loop yesterday, today we focused on Near North, the area north of the Chicago river. We took the train down to Chicago station (I notice a naming pattern here) and took a walk down the Magnificent Mile, a commercial stretch of shops, department stores and malls along Michigan Avenue. The majority of shops, if not all of them, belong to multinational companies that you can find in any high street across the world, but really the interest on this walk isn’t so much the shopping as the architecture. 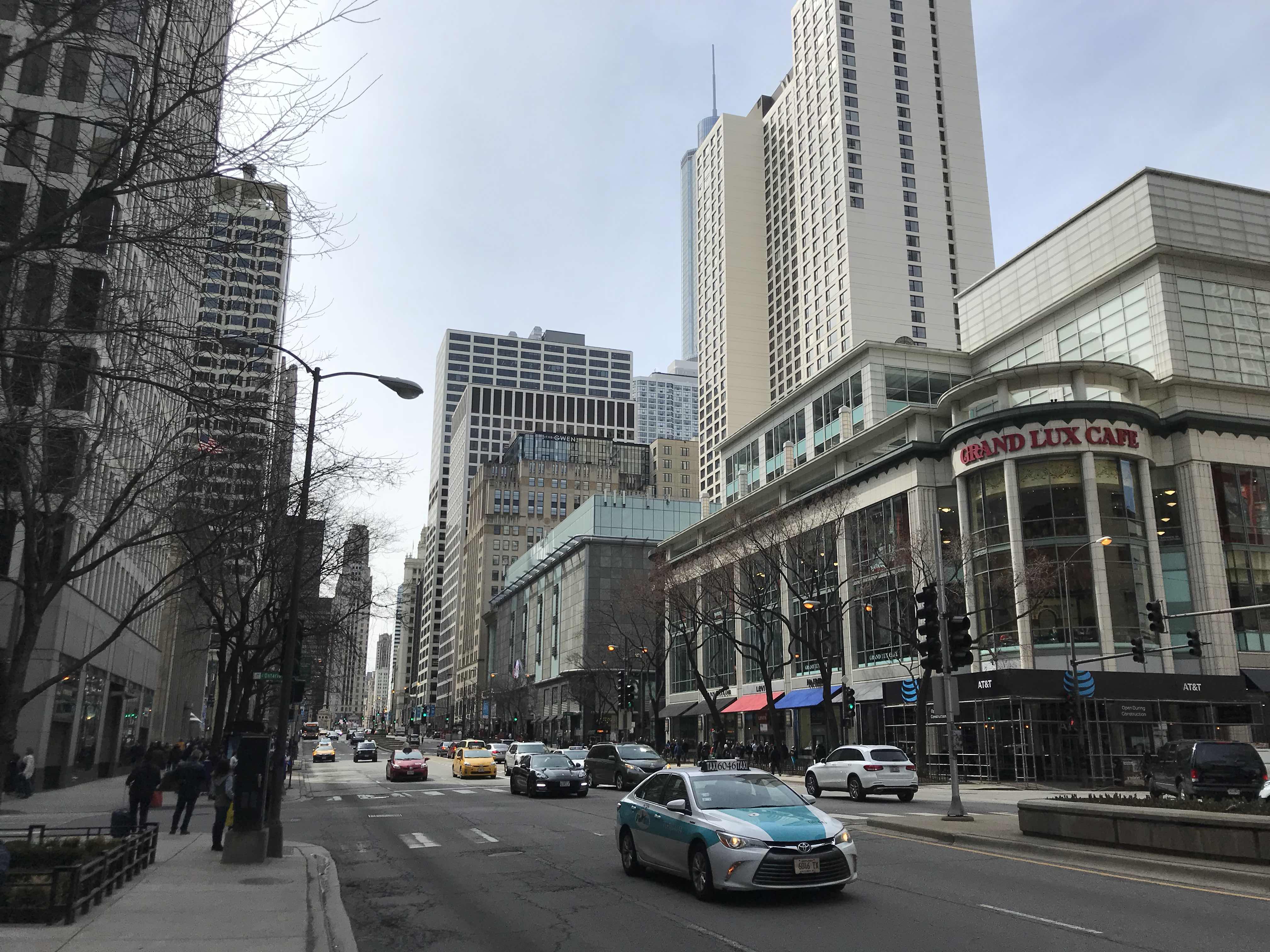 It reminded me a bit of Omotesando, the upscale shopping avenue in Tokyo, which you can read more about on this very blog (twice!), in the sense that every building has its own unique architectural style: some are dignified early 20th century, some are slick 21st century, some are grandiose, some modern and understated… The only common theme is that most are enormous!
The highlight of the walk is at the very Southern end of Michigan Avenue: the Tribune Tower, the headquarters of the Chicago Tribune. The tower itself, built in the 1920s, is a beautiful sight, but its extravagant calling card is that the base is adorned with stones brought from other famous monuments from all over the world, embedded into the walls and catalogued with a carved inscription. Apparently the paper’s owner had people bring souvenirs back when they were on assignment abroad, and so you can find stones from the Berlin wall, the Parthenon, Aya Sofia in Istanbul, the Great Wall of China… It’s quirky, if ethically questionable: what does, say, Greece think when an American reporter comes over with a hammer and a chisel and brings back a chunk of the Parthenon to embed it into a newspaper company’s wall? At any rate, the stones are there, so go take a look! The lobby is accessible too, covered in engraved quotes praising the freedom of the press. 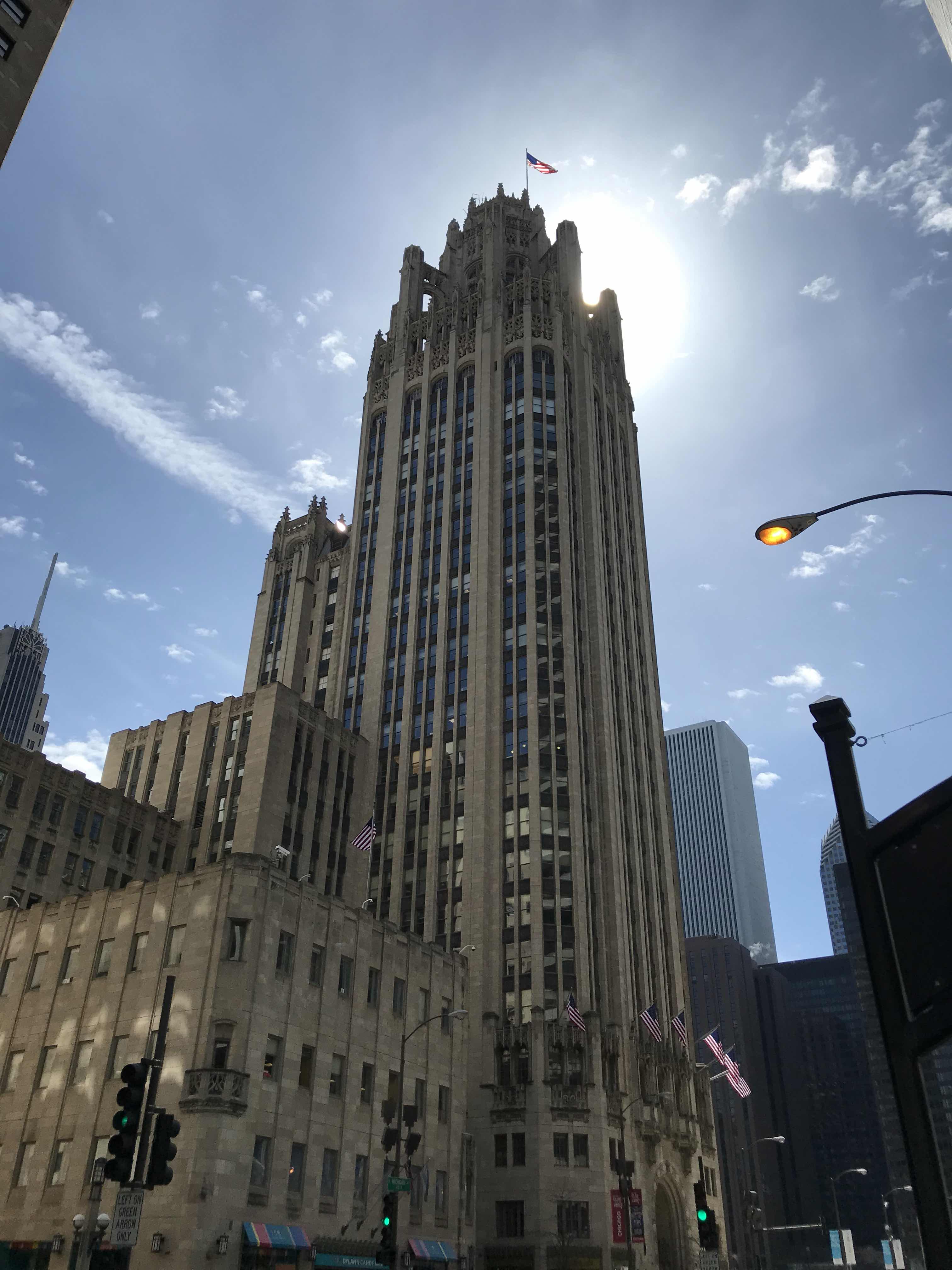 As an added bonus, the Wrigley building is right across the street, all shiny white tiles; if you’ve been to London, it reminded me of a big white version of Sicilian Avenue, with its diagonal inset. And as always, the river view is the quintessential Chicago photograph. 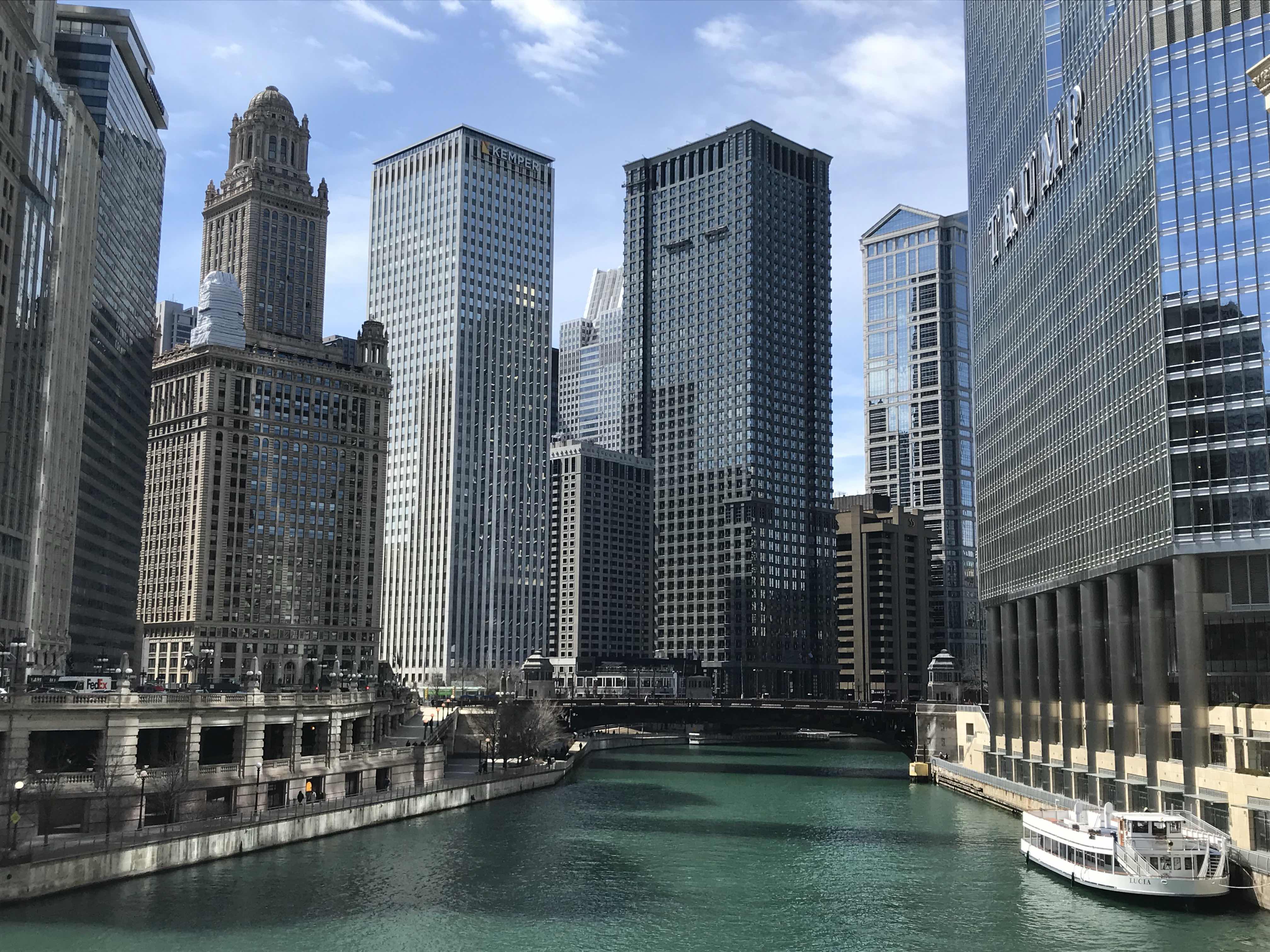 Reader, you have no idea how hard I manoeuvred to try to leave the T-word out of the picture. It just broke the composition if I didn’t have a right frame. I KNOW.
After a good morning’s walk, we headed west and stopped for lunch at a meat restaurant where we had enormous -and enormously delicious- steaks and walked over to Navy Pier, Chicago’s response to New York’s Coney Island. It is a large stretch of land that juts out onto Lake Michigan. It’s got a bunch of family-friendly touristy attractions like a children’s museum or a large Ferris wheel (less commercial: the Chicago Shakespeare Theater!), but it’s worth walking the length of the pier just to see the vast expanse of water. When you’re out there, the lake is indistinguishable from a sea: you just see water until the horizon, boats coming in, the sound of seagulls in the air. If it hadn’t been so cold, I would have been content to just sit down and take in the view. Having grown up in a coastal town, it recharged my batteries just like the actual sea does! I had to tell myself, as in the name of this blog and the film quote that inspired it: this is a lake! 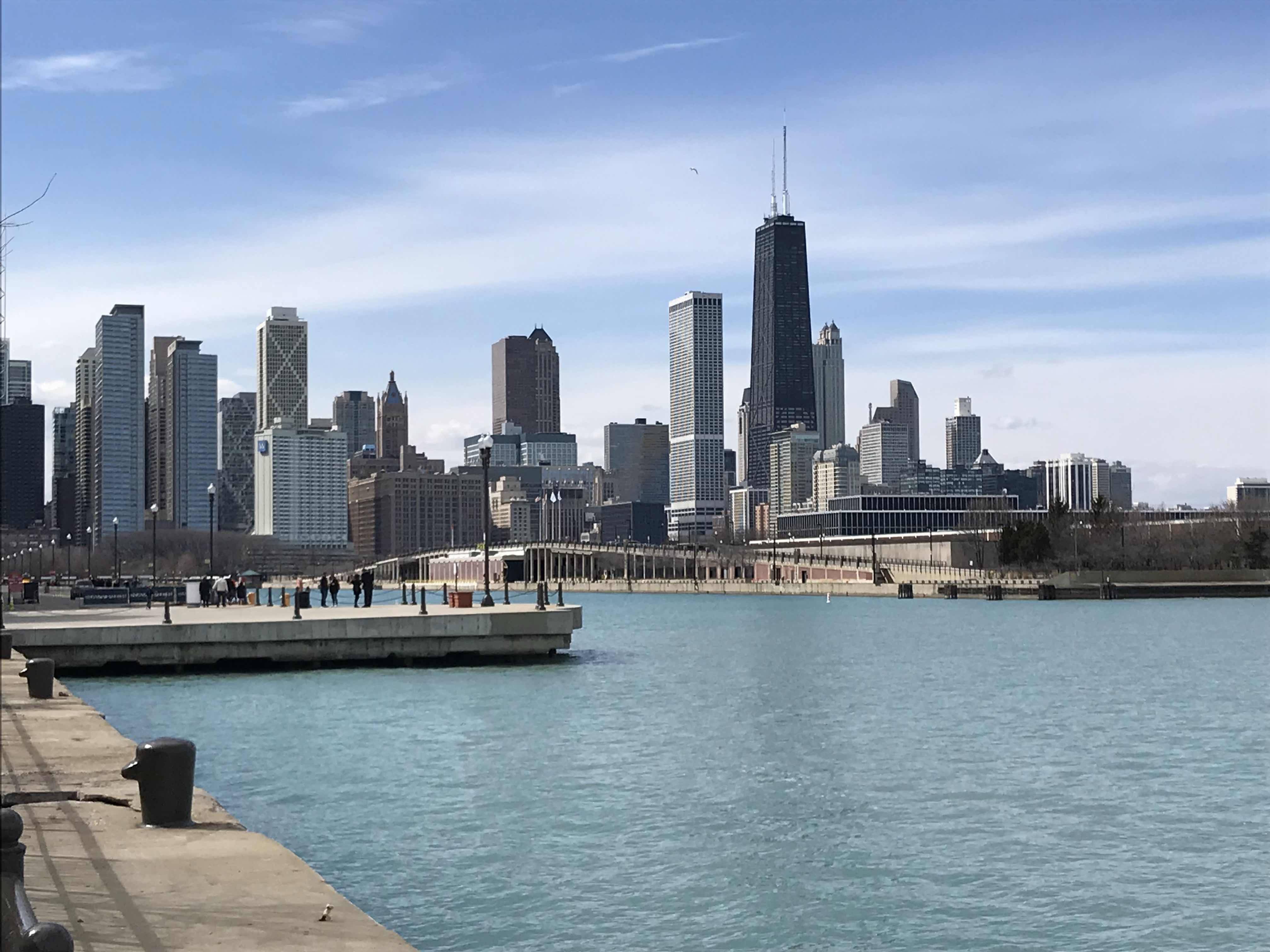 When we finished our walk around and took some excellent pictures of the Chicago skyline from the side, it was still early in the afternoon, so we took an Uber north to Astor street. We’d seen on our guides that there were mansions and houses there that were interesting to look at, but it turned out to be a five-minute walk before we found ourselves hitting the end of the street at Lincoln Park. Totally not worth the trip, but we made the most of it by turning east and doing a short tour of Old Town, a quaint neighbourhood from around the time of the Chicago Fire in the 19th century. Lots of historic red brick buildings mixed with modern blocks. Following an expert recommendation, I made a beeline to The Spice House, where the delicious smell of herbs and spices enveloped us as soon as we opened the door. I pounced at the chance to replenish my stock of Cajun spice mix, sadly gone since my last re-up bought in Franklin, Tennessee (you can also read about that on this very blog, not to keep tooting my own horn). Yum!
This was enough to wrap our afternoon in a neat little spicy bow, so all that was left was to ride a very crowded L back to our apartment, where we can return some warmth to our bones. Brrr. Now, to think of what to do tomorrow…