For the purposes of this entry, please imagine that every paragraph is prefaced by: it’s bloody cold in Chicago! The temperature hovered around 4°C, with sharp, chilly winds all day long, and not for nothing it’s been spring for a week now, just sayin’.

Today we decided to start from the top and go to our #1 Chicago destination: the Art Institute of Chicago, the city’s premier art museum. It’s better to do these things at the beginning, when you’re still fresh, before the fatigue starts to carry over. 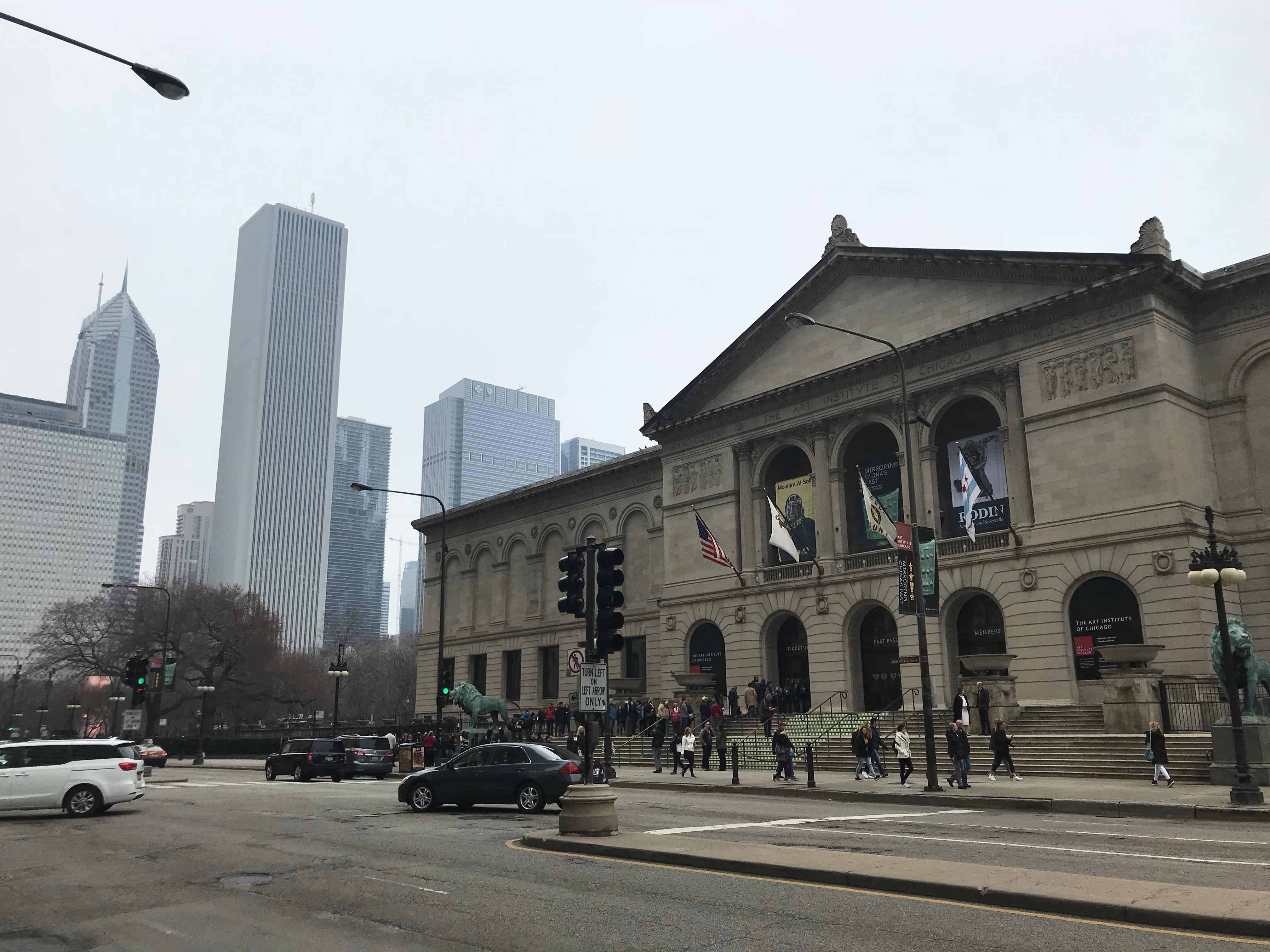 After a long L ride downtown, we arrived in front of the classical building a few minutes before the doors opened, so instead of freezing to death in the queue we opted to duck into the shop of the Chicago Architecture Foundation, which is just a couple of doors down and opens earlier. It’s a fantastic little shop, part museum store, part design boutique, with lots of really tasteful and original Chicago-themed items. A far cry from tacky souvenir shops, but also priced accordingly, great when you’re looking for something special.
When we came out, having yielded to temptation, there was still a queue outside the Art Institute but it progressed quickly. At $24 for general admission, the tickets are not cheap -especially when you consider that the Smithsonians in Washington or the British Museum in London are entirely free- but the wealth of art is worth every dollar. 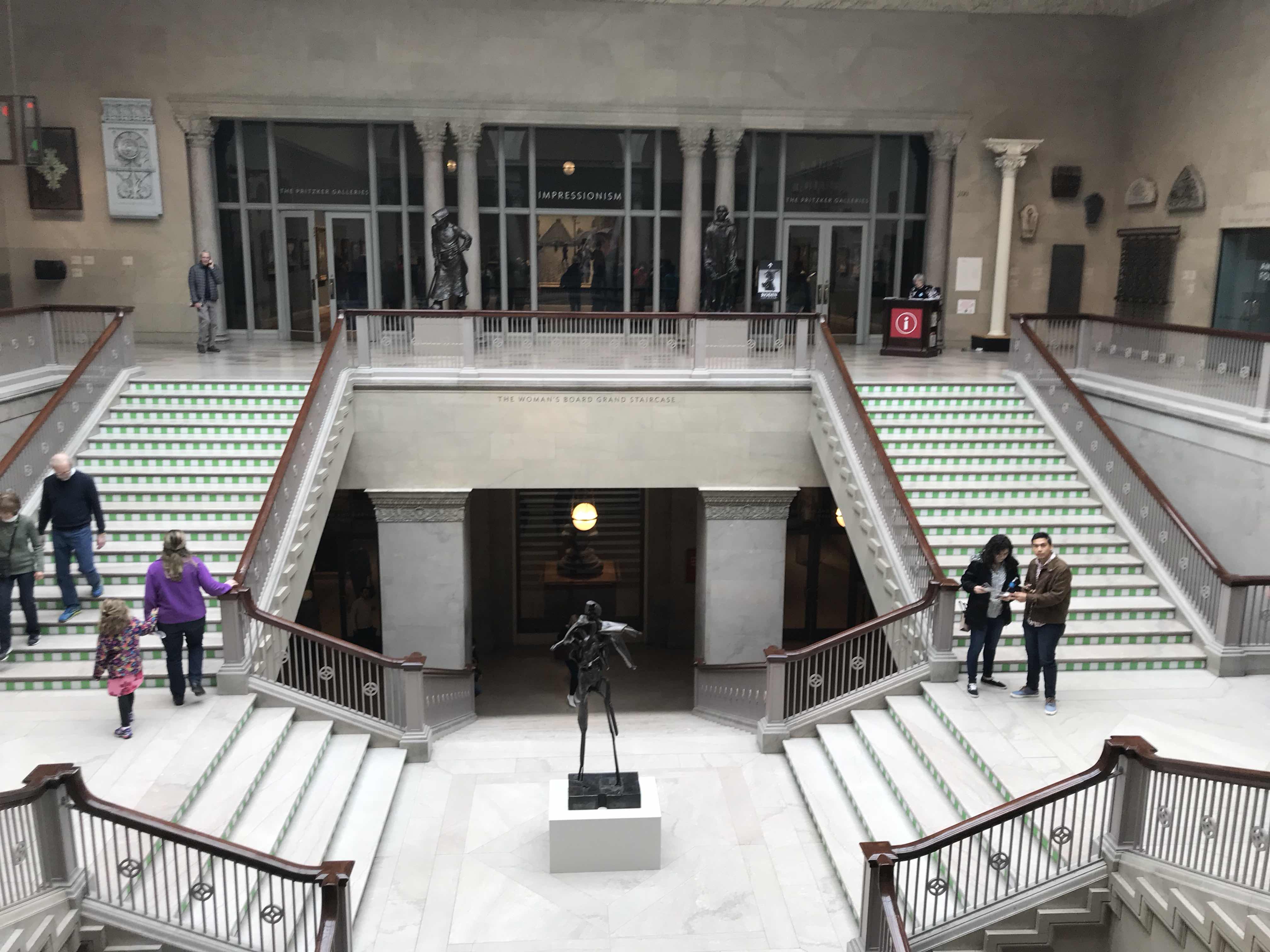 The museum’s impressive collection is distributed mostly across two floors with three distinct wings each. It was busy, but none of the sections felt particularly crowded; we could spend as much time as we wanted gawking at the most notable paintings. I was impressed by the sheer amount of Impressionist masterpieces that they own: they have Van Gogh, Gauguin, Degas, Chagall, Monet, Seurat, you name it, multiple paintings from each. At the risk of sounding insufferable, living near Paris and its museums has dulled the impact of Impressionism for me a bit -you really can get used to anything- but today was a good reminder of these artists’ talent, and the collection on display here is remarkable.
The highlight of their collection for me is for sure Edward Hopper’s Nighthawks, one of my favourite paintings ever, and which I could look at for hours. Its contrast between light and darkness is masterful, and with one single, stationary scene it speaks volumes about loneliness, distance, and city life. It is easy to imagine oneself as the fifth person in that diner, staring at your coffee mug in silence, stealing glances at the other customers. I bought a print of it at the museum shop; I guess I could easily order one from home but I’ll think of this trip when I look at it! 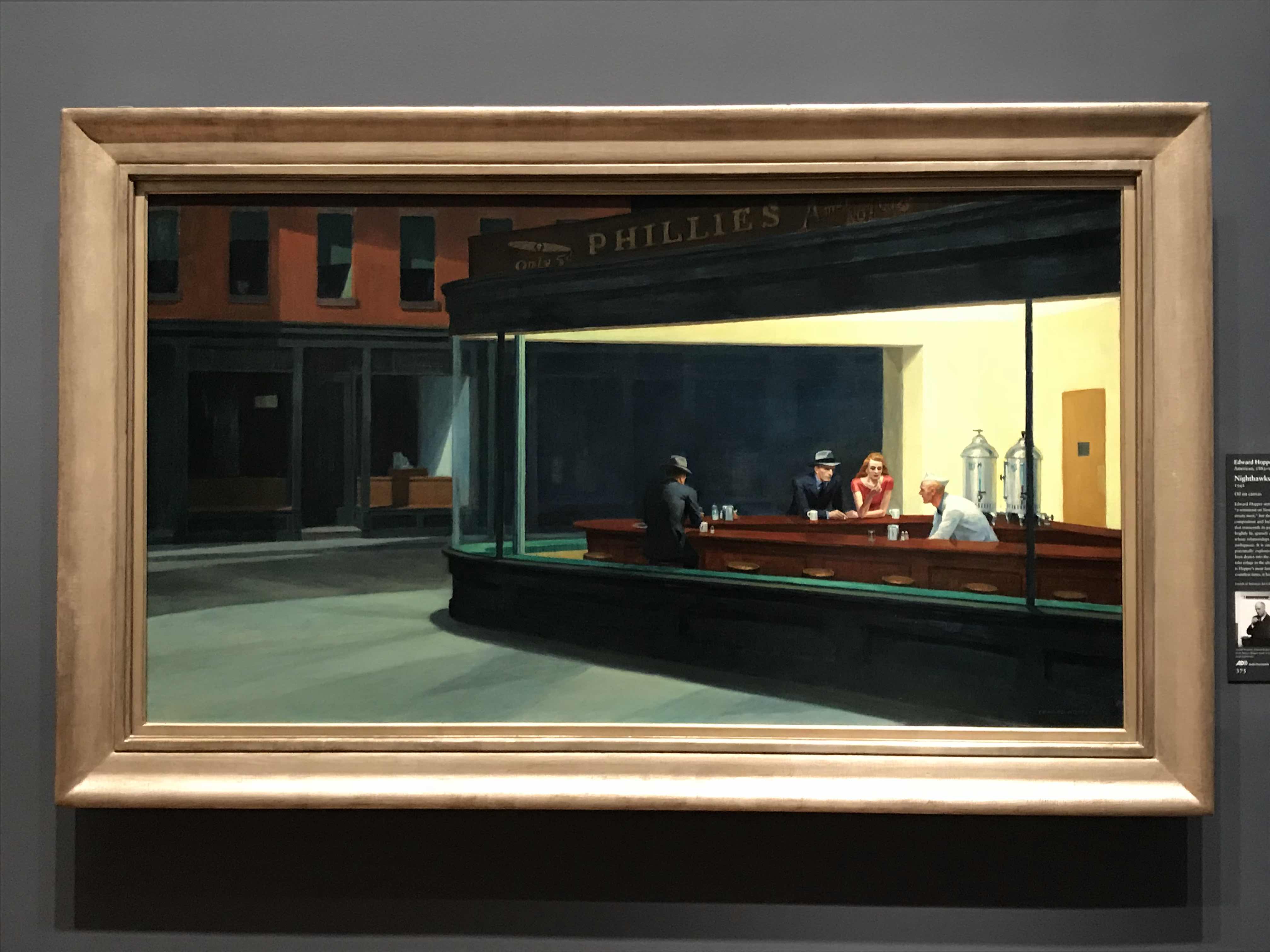 We were also delighted and surprised to find several beautiful paintings by John Singer Sargent, another one of our favourite painters. You can find his paintings all over the East Coast, most notably in Boston, where he painted beautiful murals for the city library. We know him best from his portraits of the high society, but here as in Richmond we also saw more natural scenes, with freer brushwork.
There was also a section for decorative arts and ancient East Asian art, but we were getting tired already so we gave those a cursory look and made our way out. As we were leaving we ran into the lady who had sold us the tickets, who kindly took an interest in our visit and approved of our plan to go to Pizano’s for lunch. Sure enough, we walked a few minutes over and treated ourselves to Chicago’s specialty, the deep-dish pizza, in an all-American setting that even had a baseball game going on on the TV screens. We ordered one medium pizza for all three of us, which was plenty, and it was delicious! Although as a cross between a pizza and a quiche, chock-full of cheese and toppings, it’s not something that you should eat often… I’m still full!
Well sated, we crossed over to Millennium Park, mostly to see the Bean or, as it’s officially called, the Cloud Gate, a shiny reflective sculpture by Anish Kapoor that has quickly become one of the iconic sights of the city. I was super excited to see it; I thought up close you’d see plates on it, but no, the entire surface is smooth and seamless like a mirror. As I walked all around it, marvelling at how it distorts the reflection of the skyscrapers, a literal choir of Norwegian girls in traditional costume was singing underneath. I am not making this up! It made for a very atmospheric visit! (also, it’s not that I can recognise Norwegian traditional costume from memory, they just carried bags that said University of Oslo…) 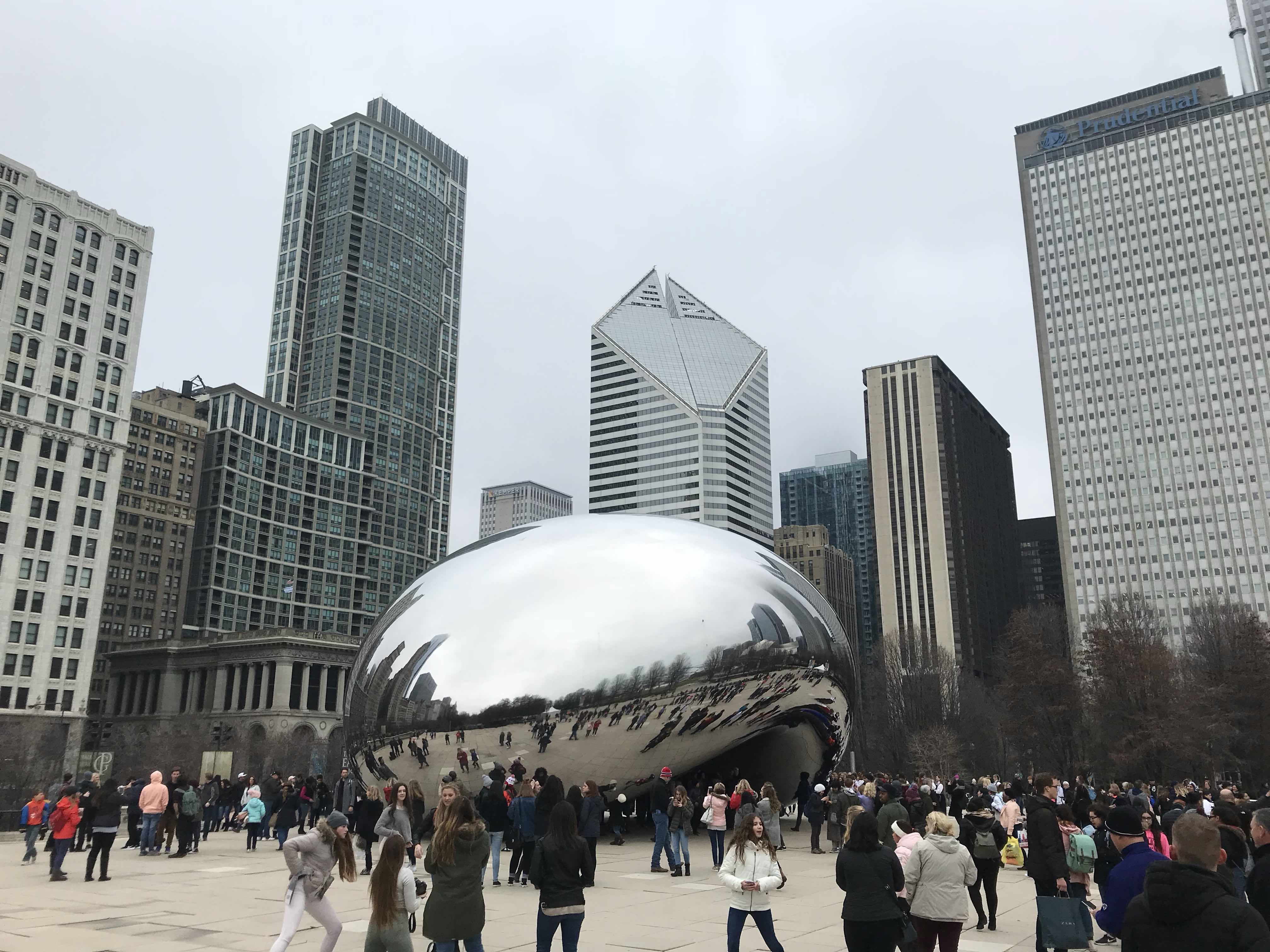 We walked back into the city, and took a quick peek inside the Rookery, a building so called because apparently pigeons used to roost there, but which is interesting because it has a small but magnificent lobby designed by Frank Lloyd Wright at the beginning of the 20th century. Its glass and iron ceiling and carefully detailed fixtures are wonderful, and it’s free, so do take a look if you’re nearby! 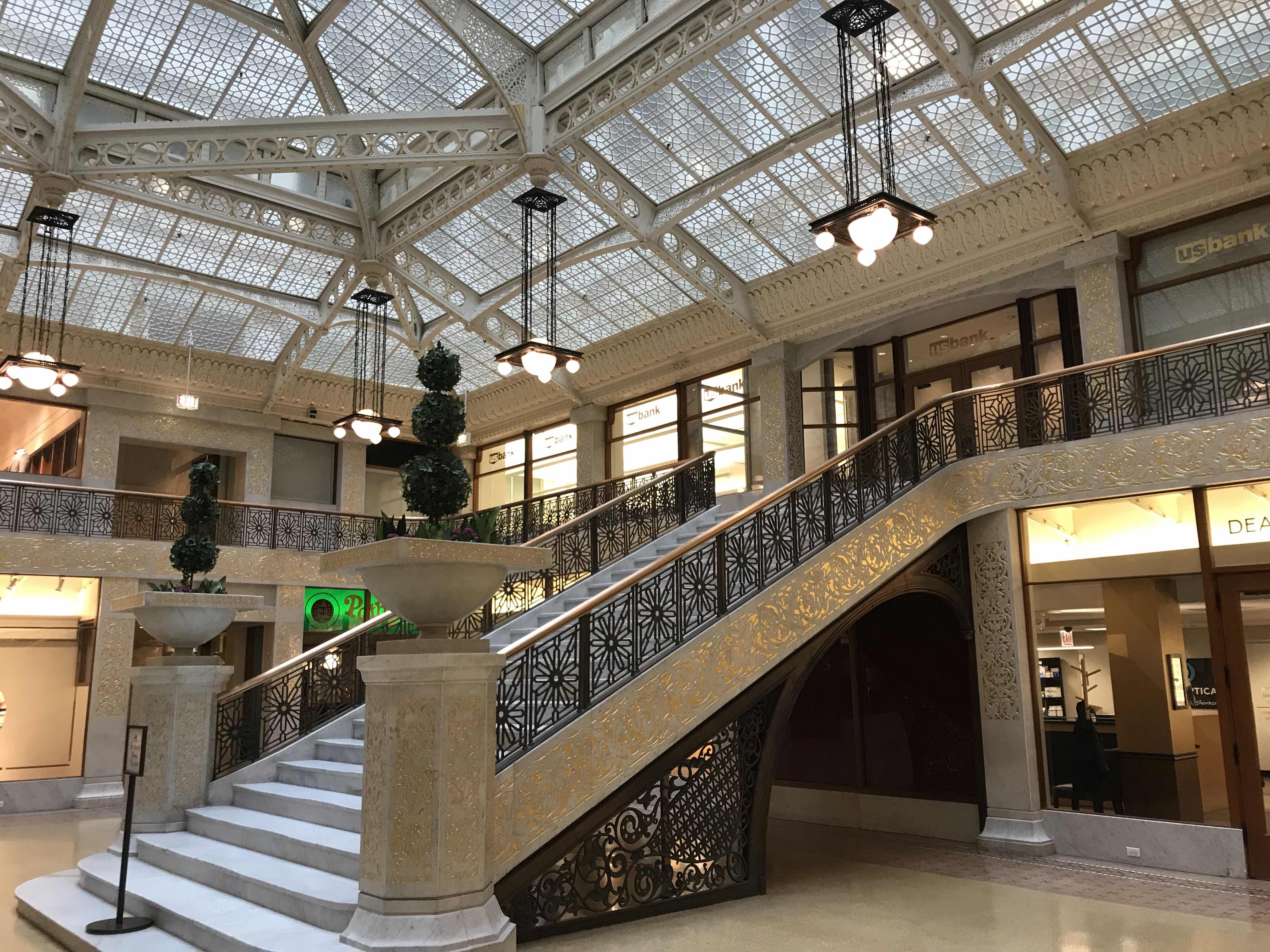 Laslty, as we headed to the L to get back to our apartment, we also took the chance to wander inside Merchandise Mart, an old American Art Déco design firm that was apparently bought by the Kennedys in the 40s. There isn’t much to do inside, but the lobby is interesting and the elevators are exactly what you imagine Art Déco elevators to be like.
We are now properly exhausted and ready to call it a day. It’s been a productive outing, in terms of art, culture, food, and shopping!