Today it was rainy and cold, not particularly inviting for walking around, so I sought refuge indoors and spent the best part of the day going from one museum to another.

First on the list was the Edgar Allan Poe Museum. Unbeknownst to me, Poe lived in Richmond and may even have written The Raven here. None of his known residences have survived; the museum occupies instead the oldest remaining house in Richmond.
It is comprised of three or four tiny houses around a quiet manicured garden, insouciantly patrolled by two black cats, and each building displays objects that belonged to Poe or his relatives. The text beside each display did a great job of weaving in the story of his life and his works. There was so much I didn’t know: that he was an orphan and that he took the name Allan from his foster family, who nevertheless did not adopt him and left him out of the will; that despite his celebrity there are entire chunks of his life we know nothing about, most notably his unexplained death after going missing for a week; that The Raven was a massive hit in his lifetime and that he got paid to literally tour at theatres just reading the poem… 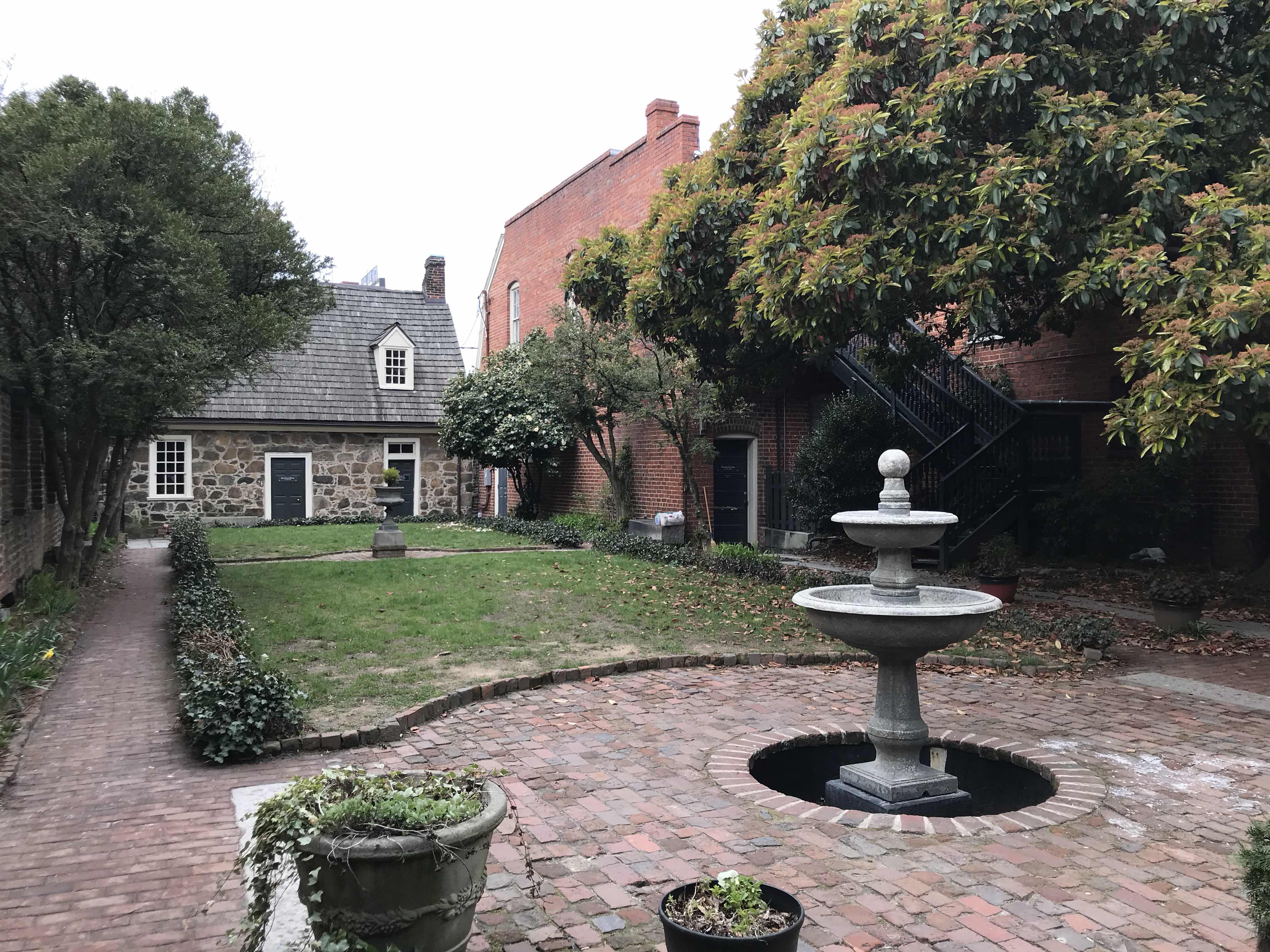 After the Poe museum, I began walking downtown -I passed the train station, a red brick building that would be interesting if it wasn’t hidden from view by a tangle of freeways snaking all around it- and arrived at the Virginia State Capitol, which looks much like other capitols you may have seen. I was just going to walk around it, but it began raining at this point; when I took refuge by the entrance, I saw that it was open to the public, and you have to know when to seize an opportunity! When I checked in at the reception and the kind lady behind the desk learned I was Spanish, she said “We’re delah-ted to have you!” Southern hospitality is real, y’all. So yeah, the state capitol can be visited free of charge, and there’s a grandiose dome with chequered marble floors, a life-size statue of George Washington and busts of all Virginian US presidents. Interestingly, you can also visit the old house chamber, with its old desks and even a massive golden sceptre from British colonial times (Virginia was the first colony, and its congress, the first one). There are also the current state halls, which looked a bit incongruous as they were occupied by a bunch of kids in school tours! 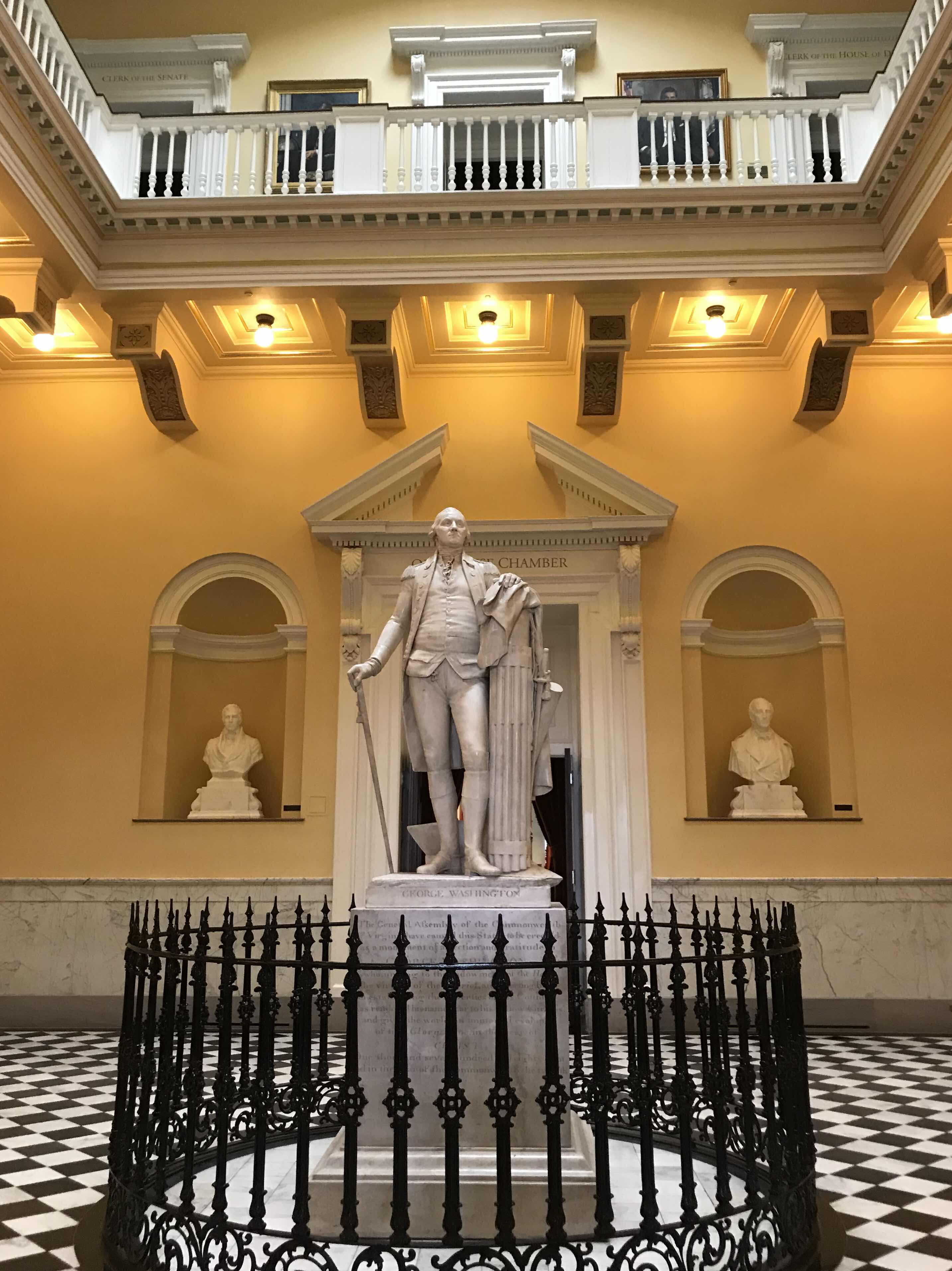 I continued my walk East, had a lovely Mexican lunch at Maya, and headed to the Valentine museum. The woman at reception also greeted me with “We’re happy to have you!” and was thrilled to note down that I was from Spain! This one’s a bit of an oddball museum: it is ostensibly a museum about the history of the city, so it covers a little bit of everything in a cursory way. They talk about the Civil War, the Civil Rights movement, the economy, the arts, jazz (Bojangles, the tapdancing star, was from Richmond; Ella Fitzgerald was from nearby Newport News)… And of course they showcase the sculptures of Edward Valentine, a famed Richmond sculptor after whom the museum is named. This was the section I liked the most, because it was a little bit more in depth. 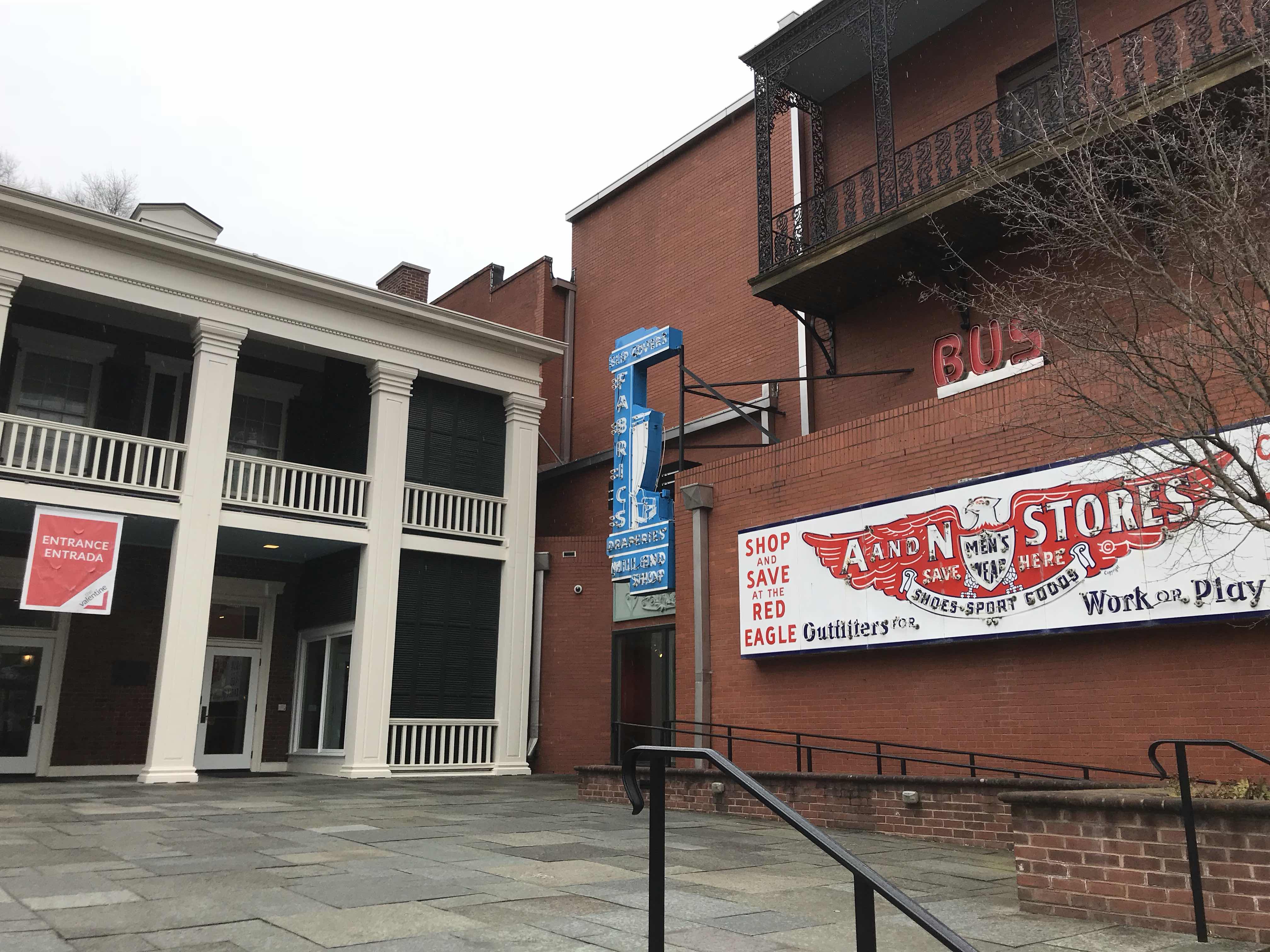 I was already a bit tired after this one, but it was still cold, still rainy, and still early, so I went to a third museum: the American Civil War Museum, which is built right next to the White House of the Confederacy, a frankly unassuming white square building dwarfed on two sides by enormous VCU hospital buildings.
Richmond was the capital of the Confederacy, which I was shocked to find out as it’s so very close to Washington DC: it’s hard to believe that the headquarters of the two warring factions were just a hundred miles apart. Naturally, the Civil War museum retells the story of the war from the point of view of the South, and the way they deal with the decidedly controversial motives behind the South’s secession is not to dwell too much on them. The exhibits on the ground floor focus almost exclusively on the battles that took place during the four years of the war, from the early triumphs to the later string of retreats. The exhibits, glass cases and the general furnishing of the museum feel a bit aged, but the explanations offer rather a detailed account of the trajectory of war figures such as Stonewall Jackson and Robert E. Lee.
The second floor of the museum is dedicated entirely to the Confederate flag, and despite its prominence in the news lately I was disappointed to see that once again the text apparatus shied away from commenting on these issues and simply dropped one comment that the flag has been adopted “by some hate groups”, and that’s about it. I wonder if it wouldn’t be more constructive to acknowledge the problems with this flag, and try to contextualize it. It was certainly informative, though: I learned that what we know as the Confederate flag was originally Robert E. Lee’s battle flag, and the official flag of the Confederacy was in fact a different design, more similar to the US flag to the point where it caused confusion and drew friendly fire in the battlefield. Lastly, the lower level offers an interesting look at civilian life in the South during the war, with period dresses, hats, accessories, diaries… This reminded me of Charleston and Savannah, where the mansion tours shed a light on the odd, suspended lives of people who stayed in the cities while three quarters of all men were away fighting in the war. 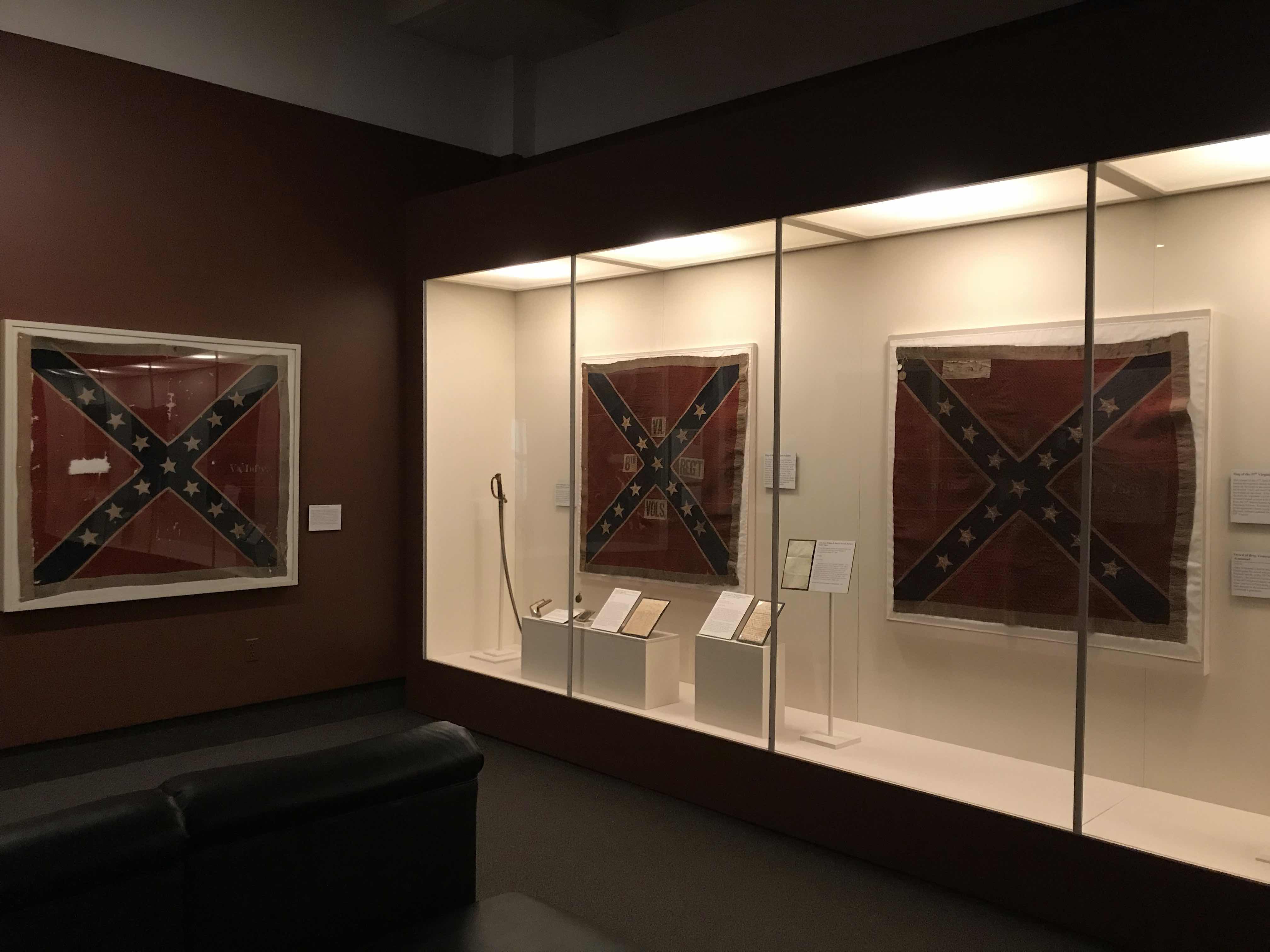 To top off another very productive day, my last day in Richmond before jetting off to Chicago tomorrow, we went to have dinner at Peter Chang’s, an amazing Chinese restaurant here. I’ve become an instant fan: we ordered a bunch of different things, all unusual to me, like bamboo fish, hot & numbing beef, shredded tofu skin, or crispy eggplant, and each dish was uniquely flavourful, delicious, and cooked to perfection (it is rare to see fish cooked well, so easy to turn out dry). It was also all spicy to some degree, but I don’t know how much of that was the restaurant and how much was us. I was sad to get full because I wanted to keep eating! It was packed on a Tuesday evening, so clearly it is well appreciated.
And that’s it for Richmond! A very liveable city, surprisingly lively, and with so much history. Chicago is going to be a bit of a cultural shock after this!