August 9, 2017 Martin Towers
Today I took off to Chapultepec, east of the old town. It is an area with an enormous park, an urban forest, which is home to an impressive collection of museums.
I took the metro for the first time; at $5 a ticket (just €0.25!!) it is by far the most affordable way to move inside the city. There were no maps of the network or lists of stops per line, though, so I had to look up the itinerary I wanted to make on my phone. I was confused when I saw that once inside the crowded car, the line’s list of stops was represented by pictures instead of names (like, Chapultepec was represented by the drawing of a grasshopper, with the name written in tiny font underneath) but the stations were labeled by name. Lots of double-checking, in short. But I managed to get off with my wallet and phone intact!
Getting from Chapultepec station to the castle hill isn’t very straightforward, as you have to take the castle exit, then go right, into the park, and then cross a big bridge over a highway. Once on the other side, it isn’t very clearly signalled either, and there are street vendors everywhere to obscure the views. Eventually, though, I made my way up the hill, still sore from yesterday’s climb up and down the pyramids, and reached the Castillo de Chapultepec perched at the very top. The ticket is $70 (€3.5) and they also make you throw away your water before letting you in. What, exactly, are they afraid I’m going to do with water?
The lower level of the castle houses an exhibition on the history of Mexico, from before the Spanish conquest until the 19th century. The collection is unremarkable, but the explanations in each room make a good summary of the country’s history. They dwell on the American invasion of the 1840s, when they laid siege to the castle and managed to fly the American flag from it. The most interesting part, however, is the higher level, which was the residence of the governors. With beautiful checkered marble floors and manicured terraces, it is a pleasant and extensive visit with incredible views of the city in all directions to boot. The interiors, which have been restored and are now on display, are entirely European and wouldn’t look out of place in any 18th/19th century palace in the old world. The place was very quiet when I got in, but a queue had formed at the entrance by the time I left. Just in time!
Next, I made my way back down the hill (there’s only one path) and crossed the Paseo de la Reforma to check out the Tamayo Contemporary Art Museum. 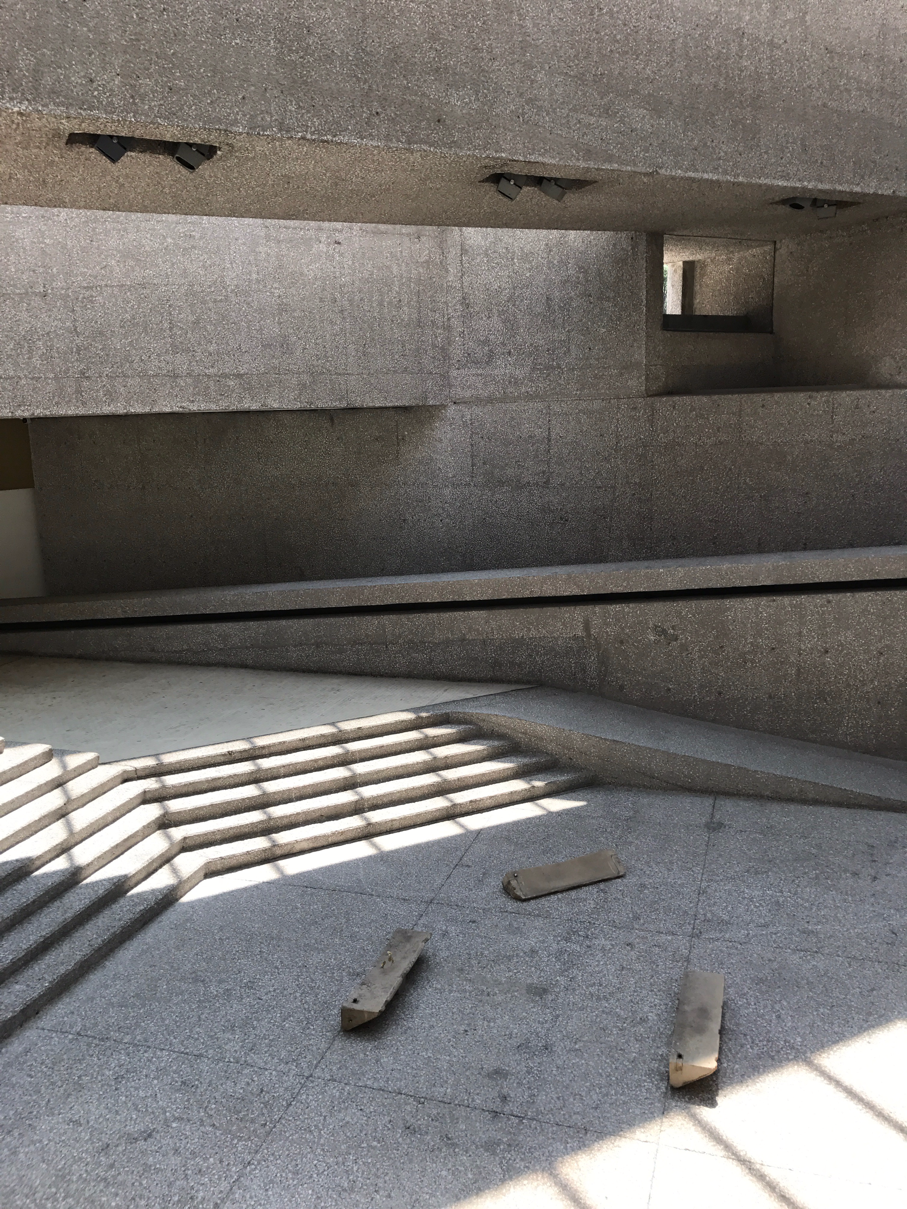 The collection was a disappointment, with only four tiny temporary exhibitions of about one room each, but the building itself is beautiful to explore, with stone, concrete and glass coming together to form diaphanous multi-level spaces. There are stairs and corridors that come out in unexpected places and there’s no one route to follow, and multiple ways of getting to the same place. The museum shop is awesome, too, with lots of those quirky designer everyday stuff that I want to see in museum stores!
It was past noon when I finished, so I walked just two streets over to Los Panchos, a restaurant that my guidebook recommended for its cochinita pibil, this fantastic pulled-pork stew that’s super flavourful but not spicy. I of course ordered that straight away and was served an immense plate, a tray really, of cochinita pibil and mole and onions and tortillas. 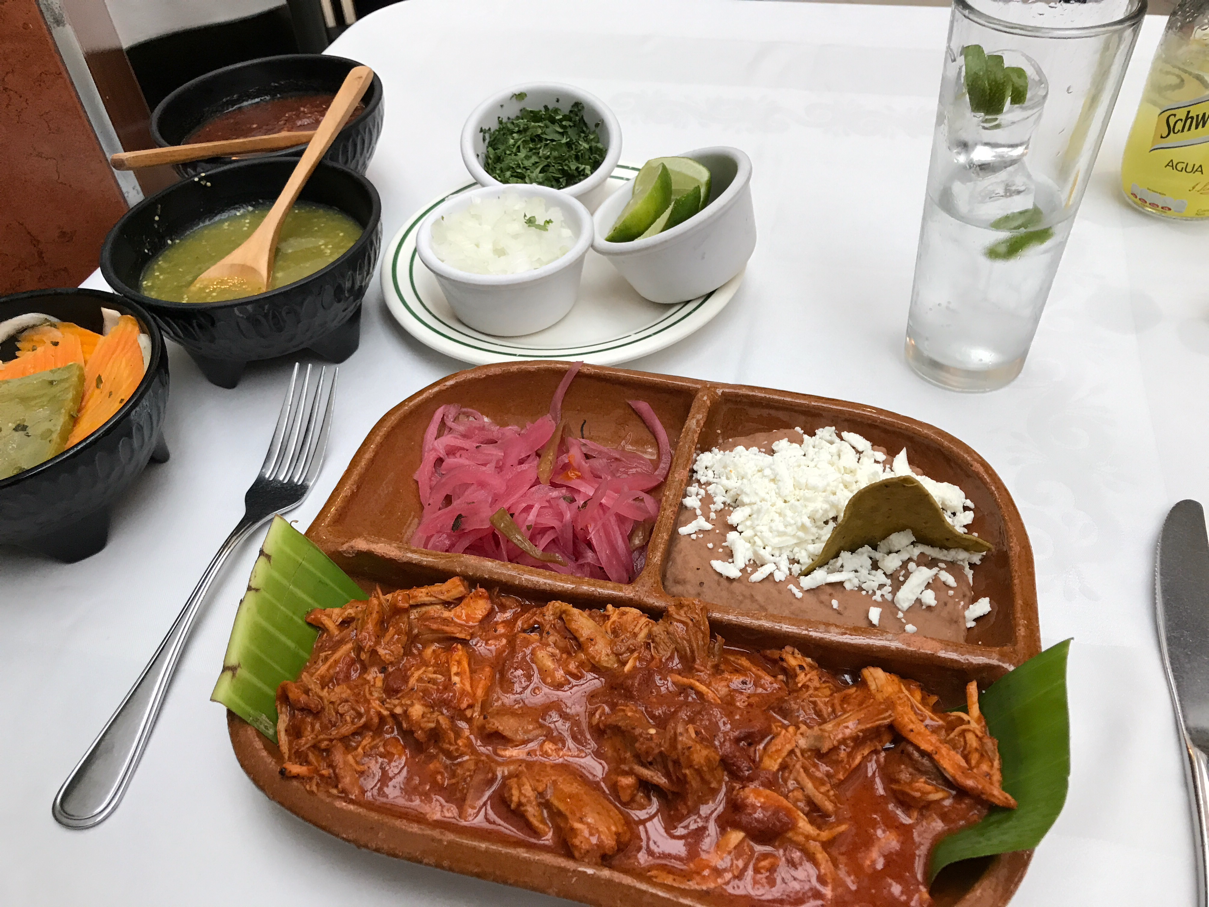 It was delicious, of course, but I do wish someone would teach me how to roll and eat tortillas without needing a shower afterwards. At one point as I was eating the waiter wordlessly walked over and put a napkin dispenser from the bar on my table, that’s how much of a mess I was making. Didn’t get a sigle drop on my clothes though!
Well fed and somewhat rested, I set out for my afternoon plan: the National Anthropology Museum, also right next to Tamayo and Chapultepec. This extensive and prestigious institution occupies four unremarkable box-shaped buildings around a courtyard with a carved pillar in the middle (it’s usually a rather striking fountain but it wasn’t working today, alas). 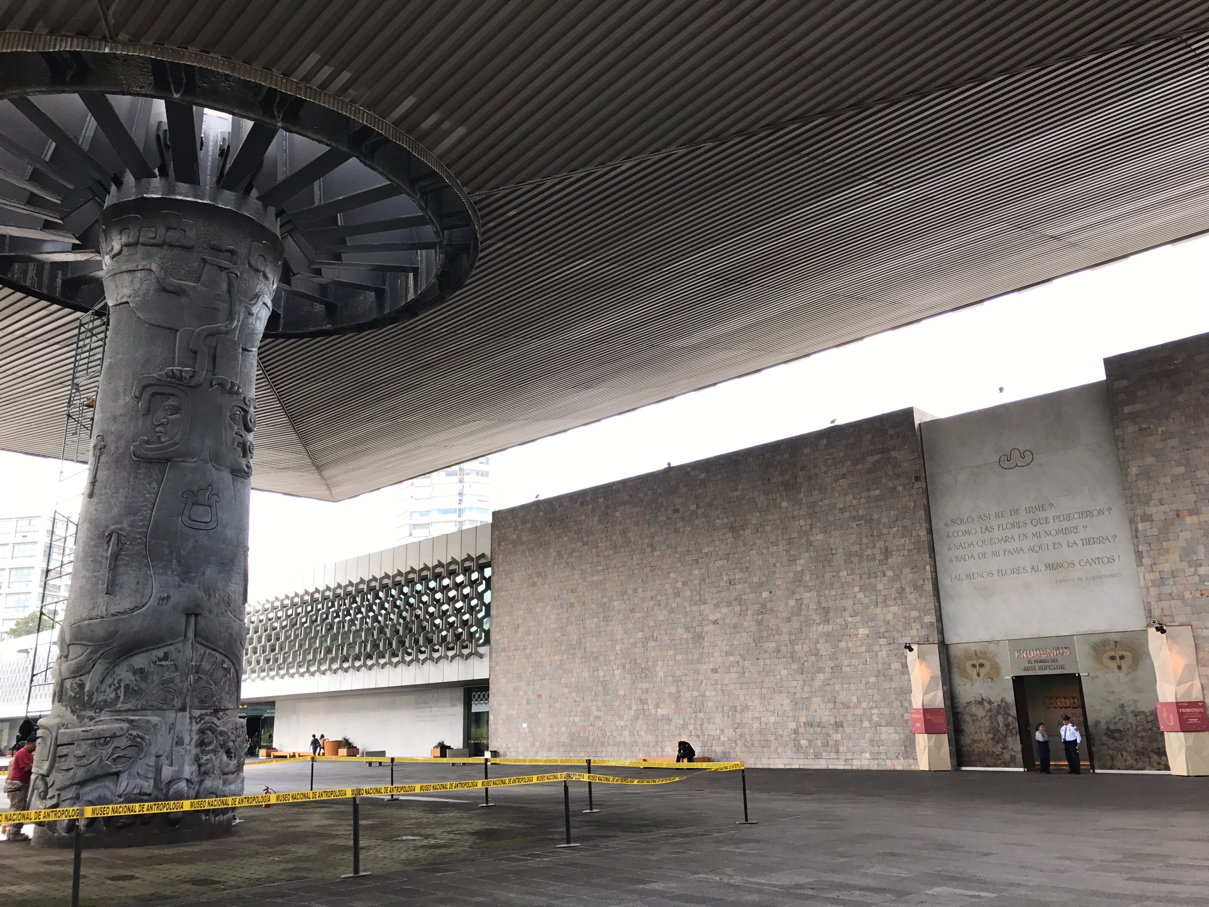 I don’t know how best to tell you just how big this museum is. Each one of its wings could conceivably be its own museum, and it has four wings, plus two temporary exhibitions that are covered by the standard ticket, so you should plan to spend an entire morning or an entire afternoon here, as I did.
When I got there at around 14:00 there was a sizeable queue for the ticket booth, but there was an attendant telling people that tickets could also be bought with a card at two machines off to the side. For some reason nobody took her up on her advice, so when I got to the machines there was only one extremely frustrated French family huffing and puffing because they couldn’t get theirs to work. I got my ticket on the first try and we were all ostensibly pressing the same buttons so I don’t know what the problem was -and I didn’t stick around to see which victim they channelled their fury towards!
Before going past the gates I checked out the first temporary exhibition, a very large collection of everyday Mayan objects. It painted an extremely detailed and thorough picture of everyday life for the Mayans: the clothing, the skin paint, tattoos (nope!) , scarification (no way), teeth filing (hell to the no), skull-shaping (nopity nope) and other factors of their appearance; the religious practices, the art, the food they ate even, and carvings and codices with their writing system. For a civilization that seemed so mysterious and remote when we went to school, I was amazed at just how much historians and anthropologists have managed to decode about them. 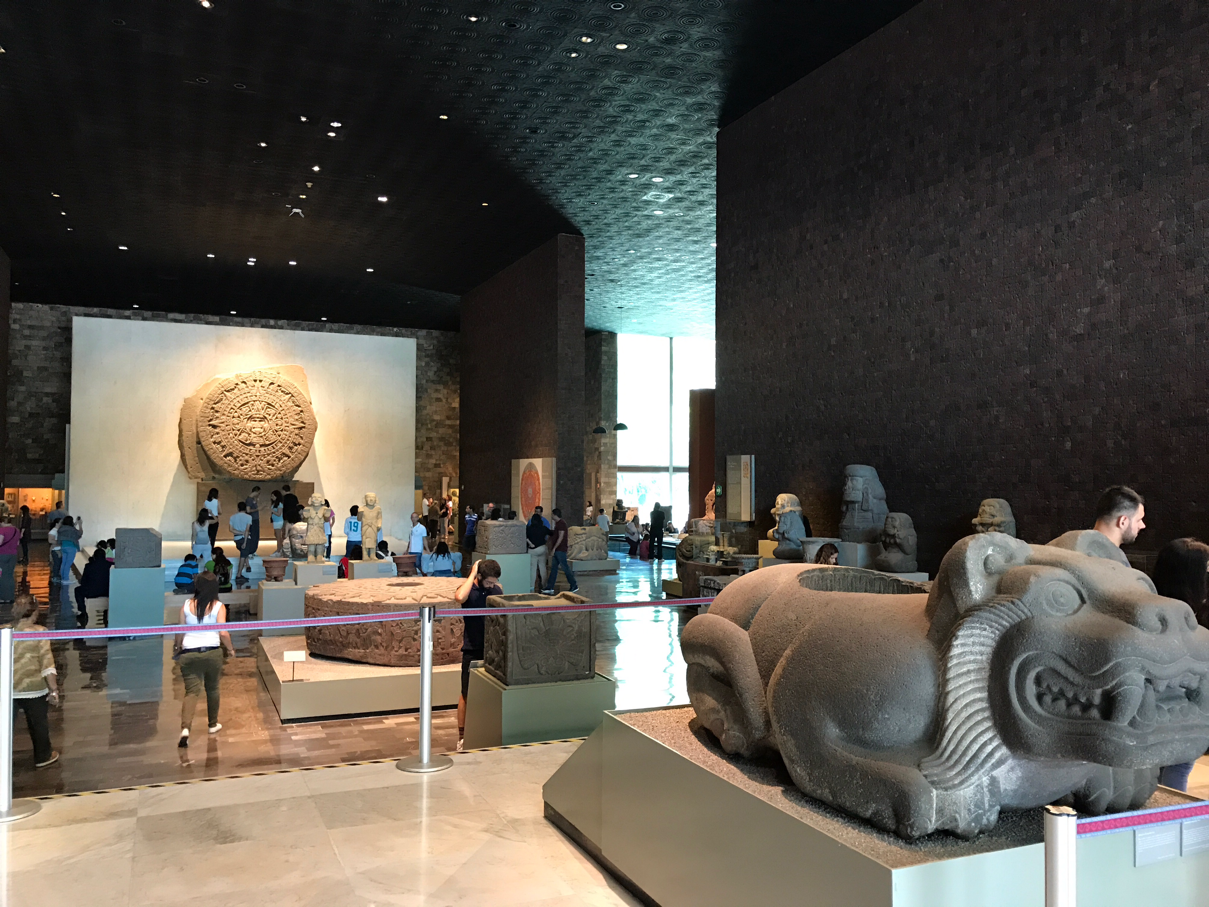 Once inside the museum proper, as I was saying, there are four separate rectangular wings, and each one has two floors. The ground floors are dedicated to different native tribes and peoples, whereas the second floors are dedicated to modern-day tribes and ethnic minorities in Mexico today. I would give the latter a skip: although it’s definitely interesting to learn how the descendants of aztecs, mayans, nahuatl, or even apaches live and still speak hundreds of aboriginal languages in modern Mexico, the exhibits themselves are all lacklustre recreations of traditional houses or furnishings. There are way too many things to see to spend too much time on this one!
The ground floors, on the other hand, are absolutely packed with priceless historical artefacts, most of them a thousand years old or more, belonging to the different groups that lived in and around what is Mexico today. There are thousands of sculptures, but also archaeological remains, like parts of columns, decorated building blocks and even the façade of a temple. All the different themed sections inside each wing were explained in detail with Spanish and English texts, and indeed this was the one place so far where I encountered lots of European tourists like me. 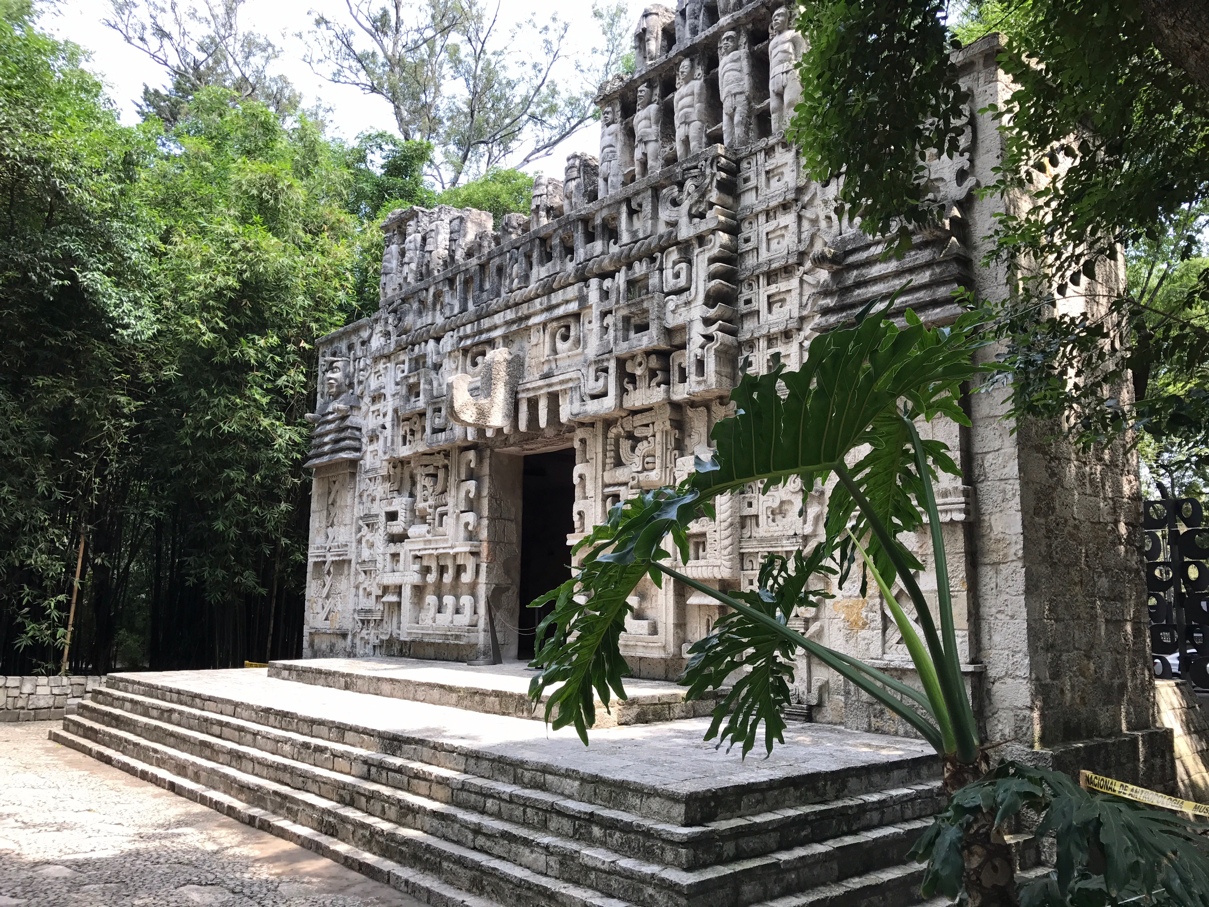 I had planned to spend all afternoon here, and I did, but even when time isn’t a constraint it’s just impossible to see everything. When I got to the fourth wing my legs could barely carry me anymore, I was parched because Mexican museums hate hydration, my eyes crossed at the exhibits and all the masks and carvings looked the same by now, so I gave it a very cursory look and braved the metro again, in a state of trance, until I could put my legs up in my hotel for the rest of the day. Stick a fork in me, I’m done!