August 8, 2017 Martin Towers
Most museums are closed on Monday, so I thought today was the perfect day to visit the great pyramids of Teotihuacán! Here’s a picture just so it comes up first in the preview! 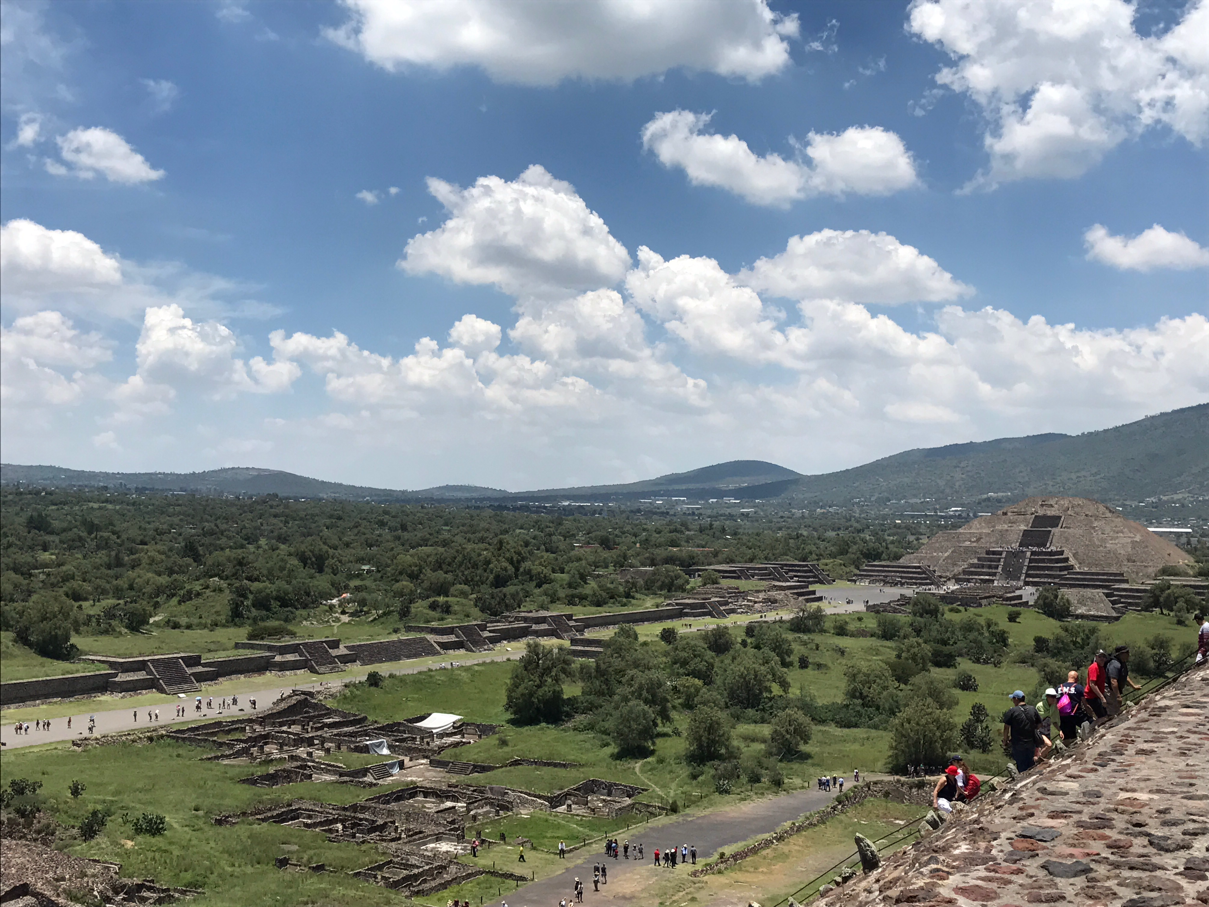 Initially I thought of going by myself (you go to the Northern Bus Terminal, take a bus, then buy a ticket to the archaeological site and come back) but I was advised to book a tour instead. The advantage is that tours pick you up and drop you off from the Zócalo in the centre, and the site is pretty expansive so it comes in handy to be shown around. I got on the 9:00 Turibus one (I swore I’d never take a Turibus because I objected to the name and I didn’t even last 48h), which for $900 (€45) takes you there and back, and pads the tour with visits to the Basílica de Guadalupe, lunch and a visit to an obsidian workshop.
Annoyingly, the Basílica de Guadalupe is the first stop, so a precious morning hour is wasted on a site that is apparently very spiritually significant but not very engaging otherwise. There is a massive church that houses an old painting of the Virgin Mary, built in a very 60s-70s style… which is by way of saying that it hasn’t aged very well. 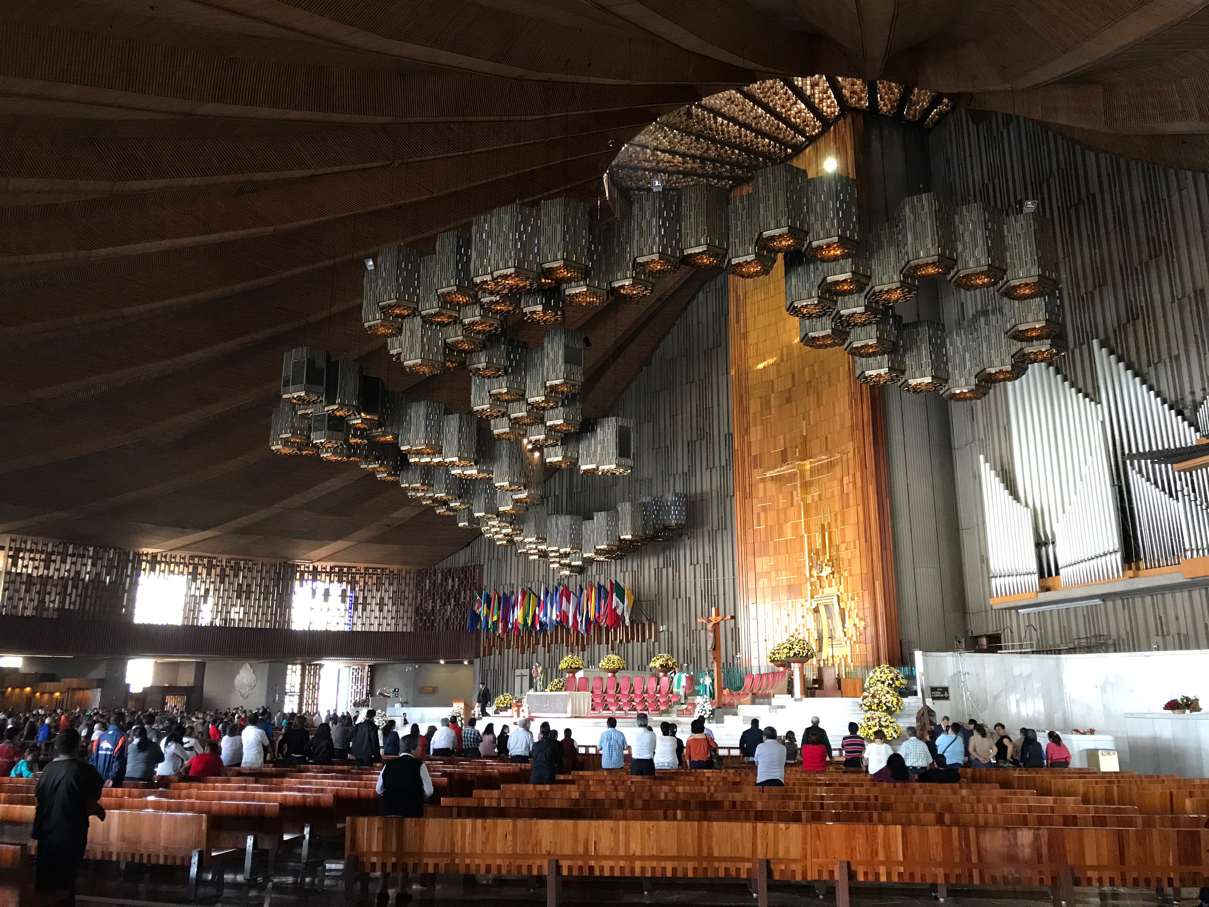 Next door is the old church, which was built with heavy volcanic stones and so over the years it has gradually sunk into the ground. It is now all crooked and askew, the façade lurching forward menacingly. I walked inside and the floor was on a slope -it looked like it could fall down in any moment! I didn’t linger!
Then we finally went to Teotihuacán. I said it was annoying that we didn’t go directly because by the time we arrived -the pyramids are one hour by car from the centre- it was noon, when the sun hit the hardest, and there isn’t a single shade to seek cover in in the entire archaeological site. Thankfully I was equipped with sunscreen, sunglasses, a hat and an umbrella, or I would have spontaneously combusted faster than a Spïnal Tap drummer. Instead I just stayed inside my own Cone of Shadow all day and tried to not get even my hands in the sun (lesson learned from when I burned the backs of my hands and only them in Sapa, Vietnam).
The pyramids took my breath away from the very first moment I got off the bus. They are both way, way larger than I expected from the pictures I’d seen. The Pyramid of the Moon looked like an actual hill from the bus, and it’s smaller than the Pyramid of the Sun. I think it’s the lack of other landmarks to measure them against that belies their true size: you have to be there to feel the immensity of those structures before you. 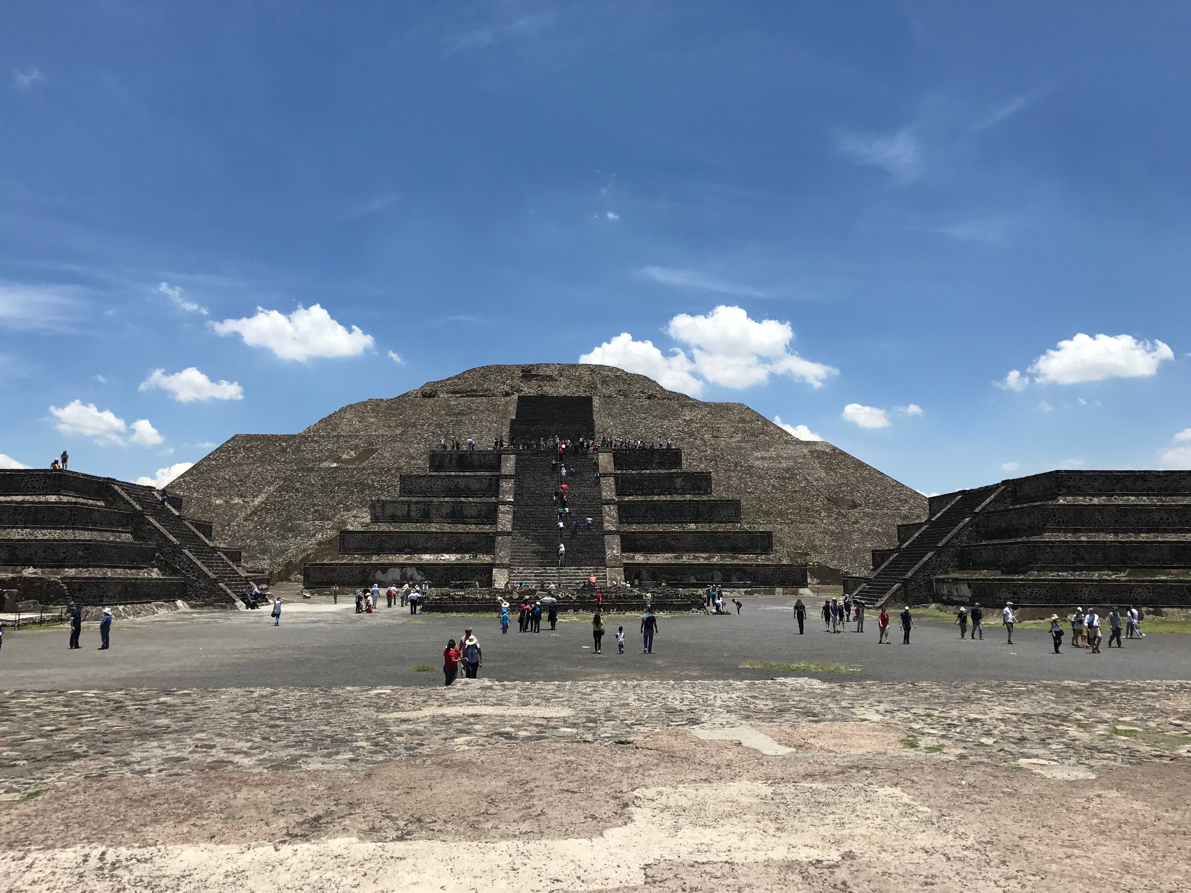 The advantage of having a guide is that I learned a lot about the place. The city of Teotihuacán was founded a stunning 2200 years ago, by one of the civilisations of the region, and it prospered for hundreds of years until they were hit with a succession of floods, famine, scarcity of resources and jaguars (wait, what?). The original inhabitants then torched and abandoned the city and moved elsewhere. It was apparently only hundreds of years later that the Aztecs rediscovered the city, gave it its current name, meaning City of Gods because they believed such a vast city couldn’t have been built by humans, and resettled it. They assigned the pyramids to the sun and the moon, although we now know that was not their original intent. In its heyday, Teotihuacán had up to 150,000 inhabitants.
Now, the archaeological site comprises about 3 sq km of a much larger area that hasn’t been dug up. It is dominated by the Pyramid of the Moon, which is smaller but sits right at the head of the Avenue of the Dead, with numerous smaller structures on both sides, and also by the Pyramid of the Sun, which is much larger but is a bit off to the left in the layout. 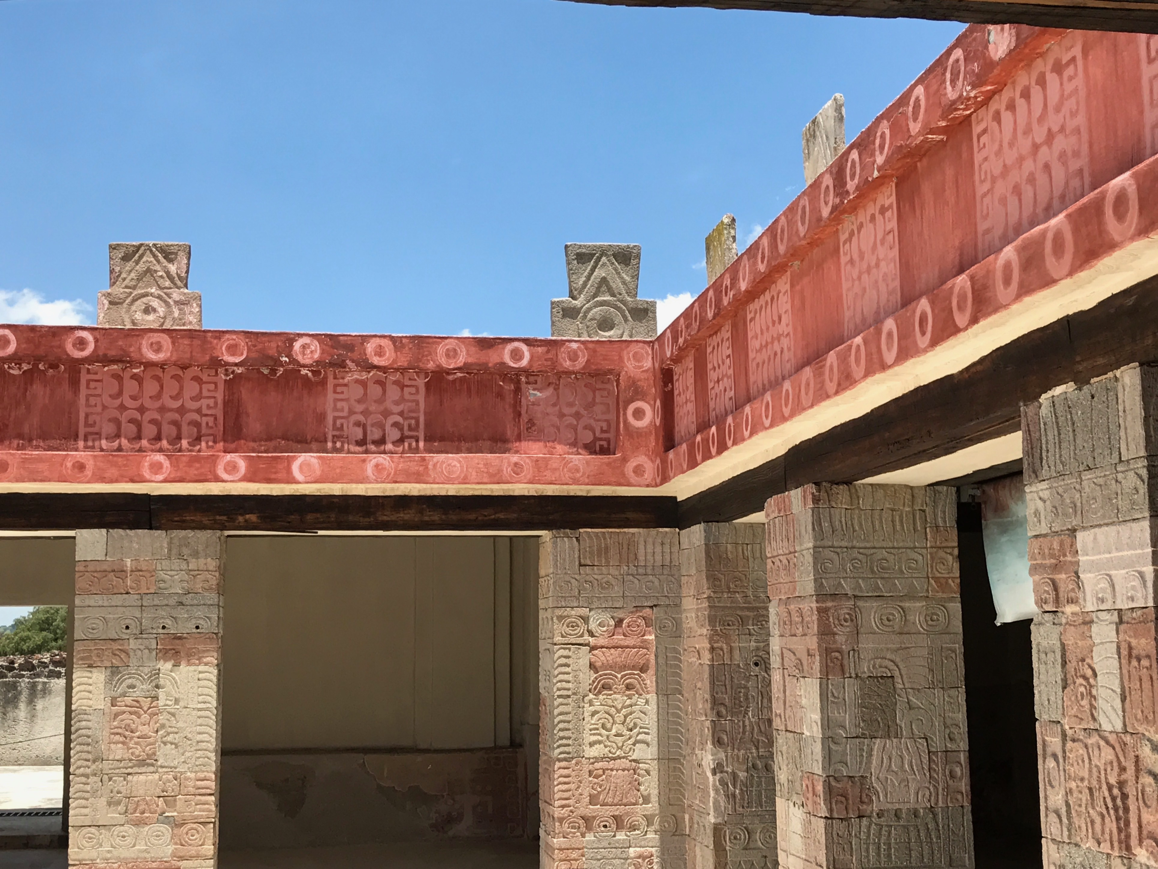 Our tour began through one of the temples that have been restored, where you can still see frescoes that are two millennia old. Many still conserve a bright pigmentation. The guide didn’t earn my sympathy trying to hock souvenirs during our precious time there, but at least afterwards he left us to our own devices. My mission was clear: climb to the top of both pyramids at once!
The Pyramid of the Moon is the closest one as you leave the temples, and also the smaller one, so I headed up there first. The nearly vertical incline had steps that went up to my knee each, so the effort was not inconsiderable, and I was panting well before reaching the top (I’m gonna go ahead and blame it on the altitude, don’t correct me). The view from the top is well worth the physical exertion, as you get a privileged vantage point looking down and ahead at the Avenue of the Dead and, of course, the entire green valley all around. It was incredible to stand up there and try to imagine what it must have looked like when tens of thousands of Aztecs would gather there for their rituals. 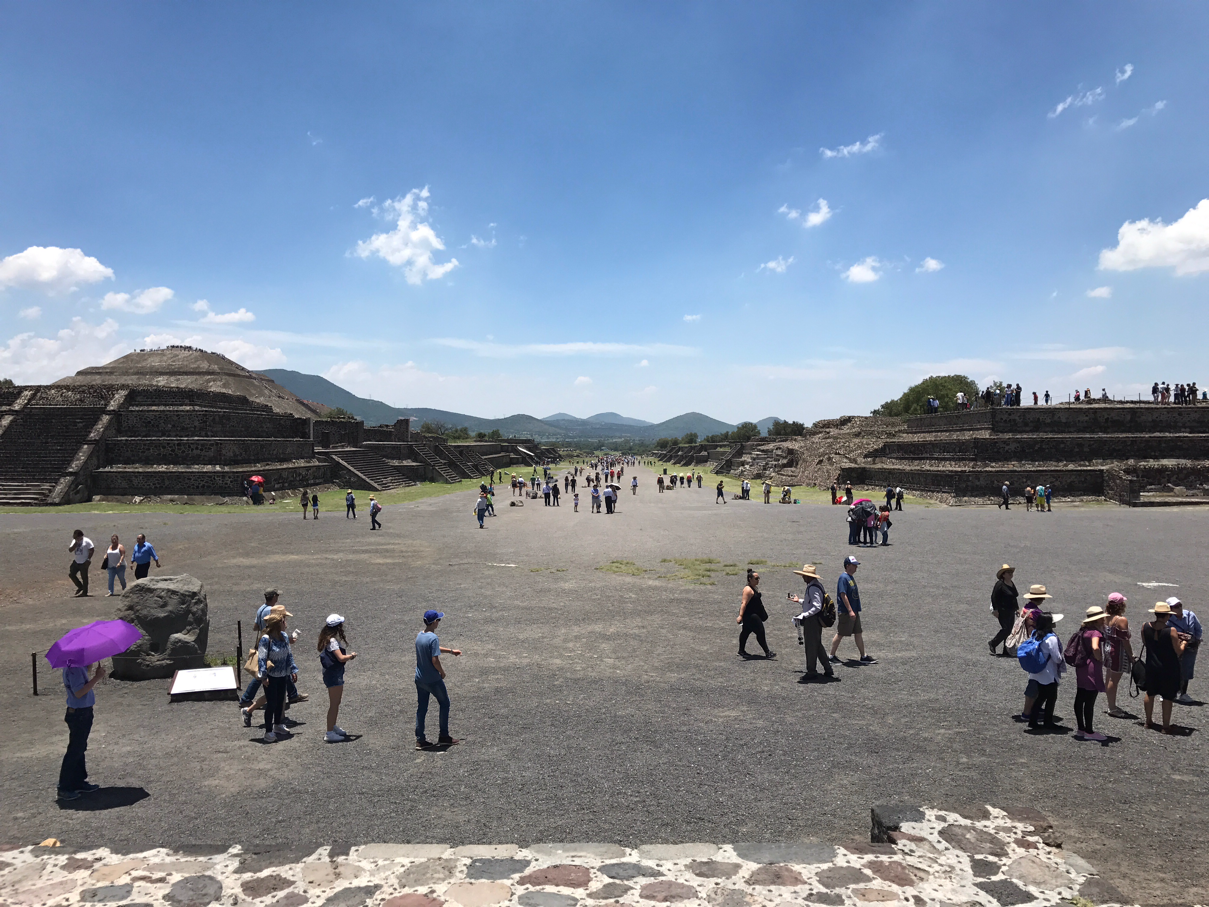 I went back down, walked down the avenue and took a left to the Pyramid of the Sun. It cannot be overstated just how gigantic it is. As you get closer and closer, it looms taller and taller above you, and you can see the tiny shapes of people at the top. It’s even more impressive because it’s not just a tower, but giant in all dimensions. See if you can make out the people at the very top in this photo: 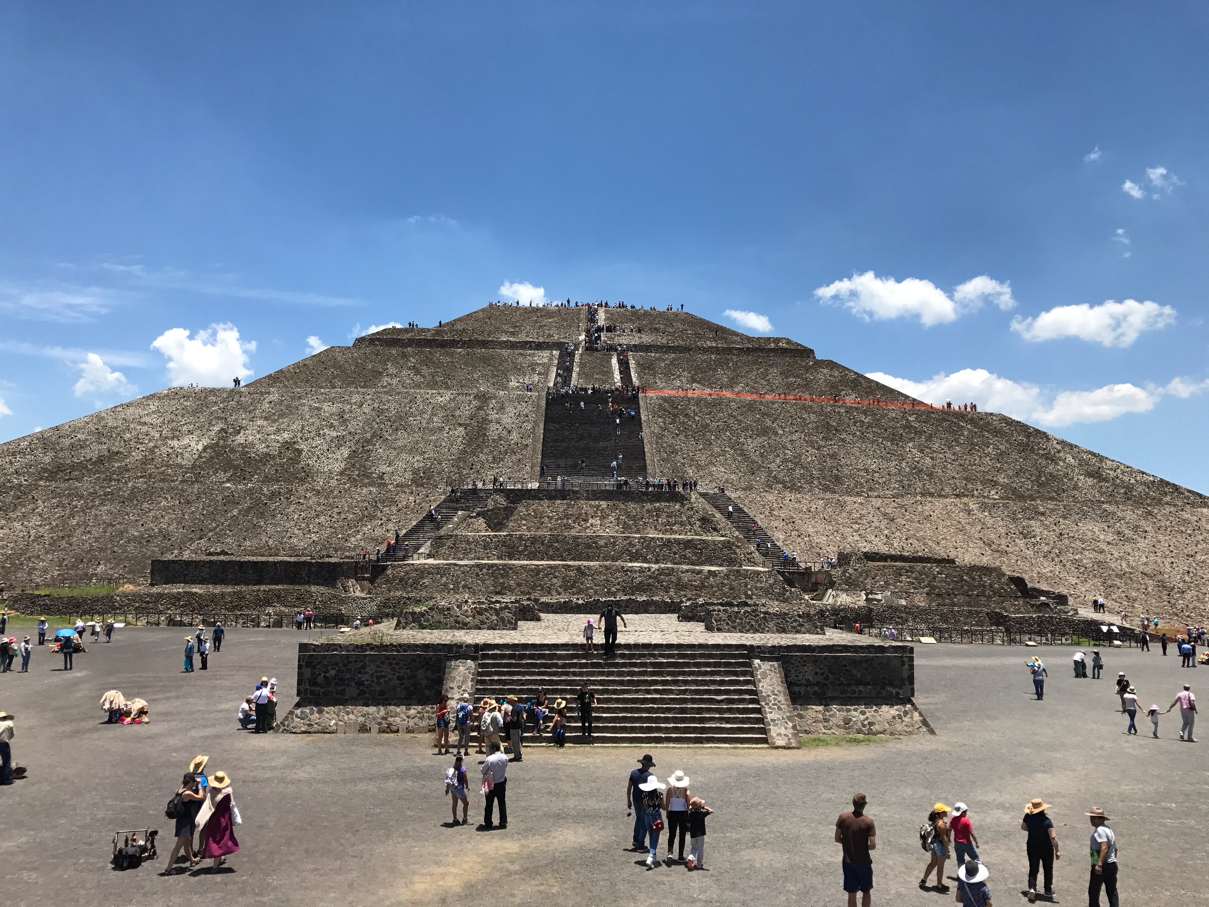 The steps at the beginning are very benign, but as you get to the second tier they start to get taller again. Here there were more people, and the stairs are narrow, so we would need to form a single file and hold onto the railings, me with my parasol like a Southern belle, and climb slowly, paying good attention to our footing. The different tiers provide excellent opportunities to regain your breath between flights of stairs -take them!
From all the way up there, the view is also magnificent. On the one hand the ensemble of Teotihuacán almost seems small from so high up, but on the other you can see the valley all around for miles. The wind was blowing strongly at the highest tier, a welcome feeling after the still heat of the ground level. The top was packed with people, all of us in different stages of exhaustion, but the immensity of the surrounding space prevented it from feeling crowded. 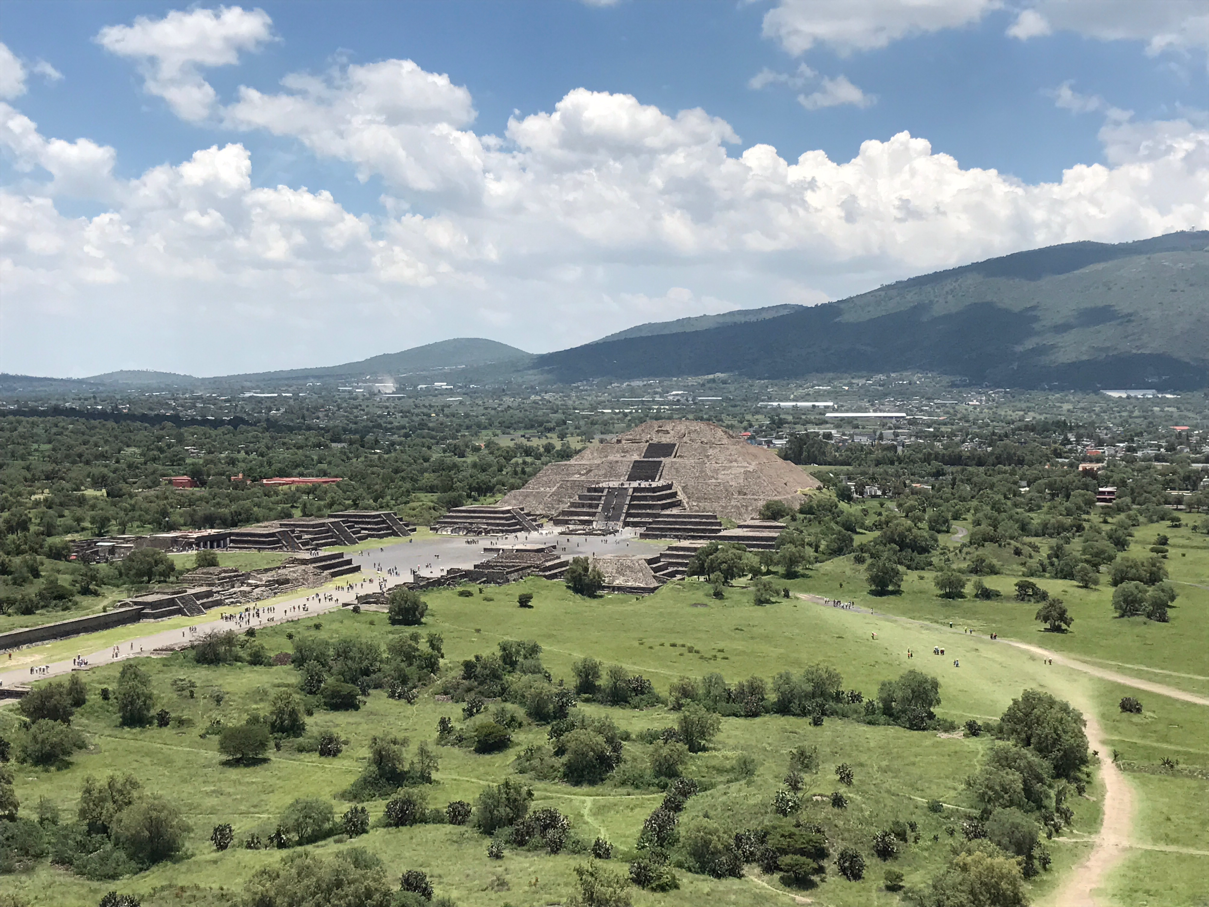 Eventually I had to very carefully make my way down; my feet were longer than the surface of the steps, so I had to descend sideways like a crab -at least thanks to my umbrella I wasn’t also the same shade of red! I made it down without incident.
Afterwards the tour took us to a forgettable lunch, with mariachis even, which, excuuuuse me I’m eating, then through a tourist trap where they showed us how obsidian is worked (it’s a volcanic crystal, I found), and then finally at around five we got on the world’s bounciest paved road and rode back to the city centre. On the way back I looked out the window at the endless sea of houses that is Mexico City’s outskirts. Like Tokyo, it’s houses as far as the eye can see, except Mexico City is very hilly and so the entire terrain goes up and down like a troubled sea.
I am done for the day… Just two days and already so much history, so much culture. What an experience!