Our new adventure is… Mexico City!

I landed yesterday after an endless 12h flight, and I think I got altitude sickness (Mexico City is 2,300 m above sea level!); the very second I stepped off the plane I got a splitting headache and lightheadedness that didn’t go away until I had an aspirin and a meal three hours later. Between that and the jetlag, I was thoroughly broken by the time I went to sleep!
I woke up a lot better today (albeit at 6:30AM) and set out to get my first contact with the city! I’m staying near the cathedral in the Centro Histórico, which my taxi driver yesterday gleefully informed me isn’t the place to be; apparently the historic centre isn’t the centre, we’re supposed to stay in Roma or Zona Rosa which are the trendy places to be. I don’t know these things, guys! I just got here! Don’t call things that aren’t the centre, centre! 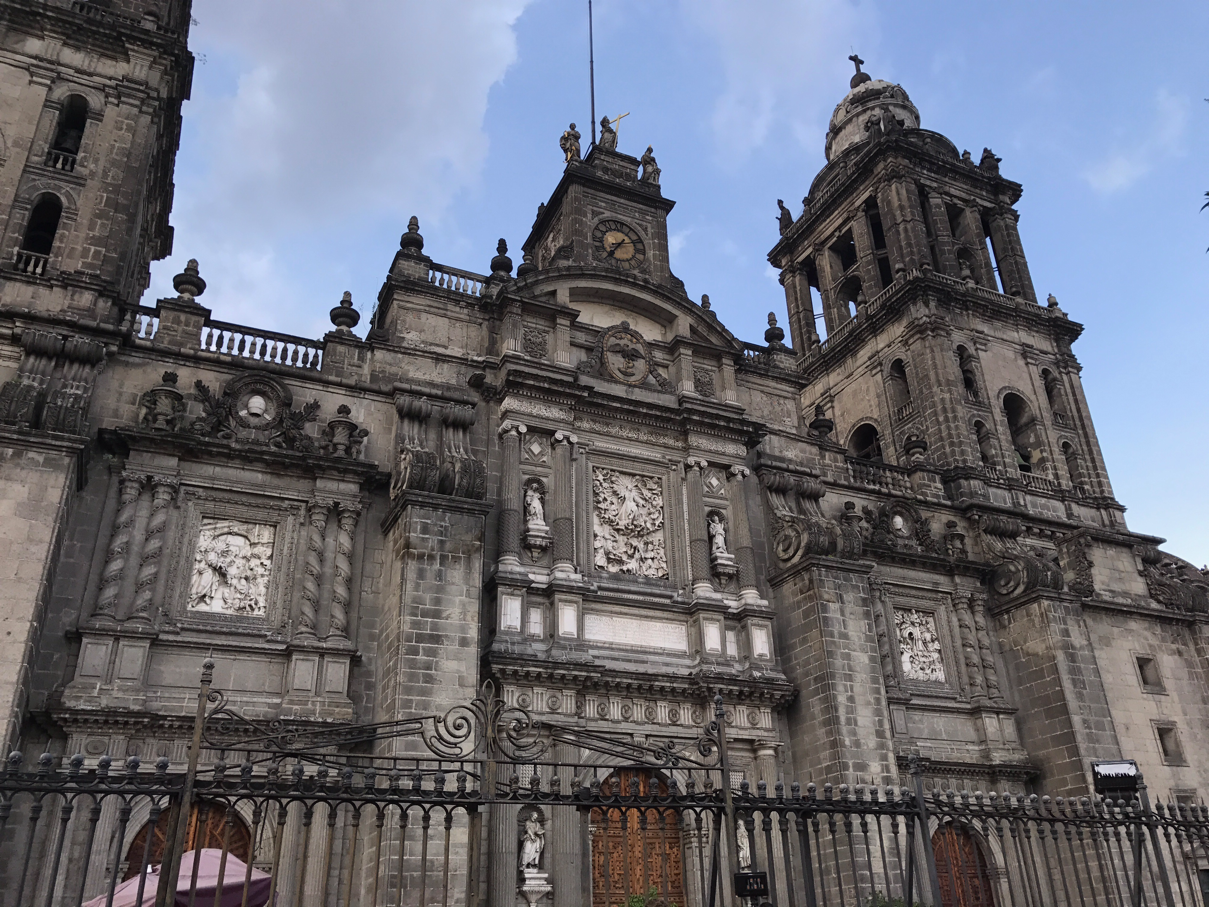 Anyway, I began by visiting the cathedral right next door, a deceivingly large 17th century building with many gilded chapels inside. Because the interior is broken down in different areas, it doesn’t feel as big as it really is, but the sunlight shining through the windows and the echoes of the mass organ’s music contributed to a haunting atmosphere. It’s interesting that many of the saints, angels and figures represented here are completely different to those in European Catholic churches. 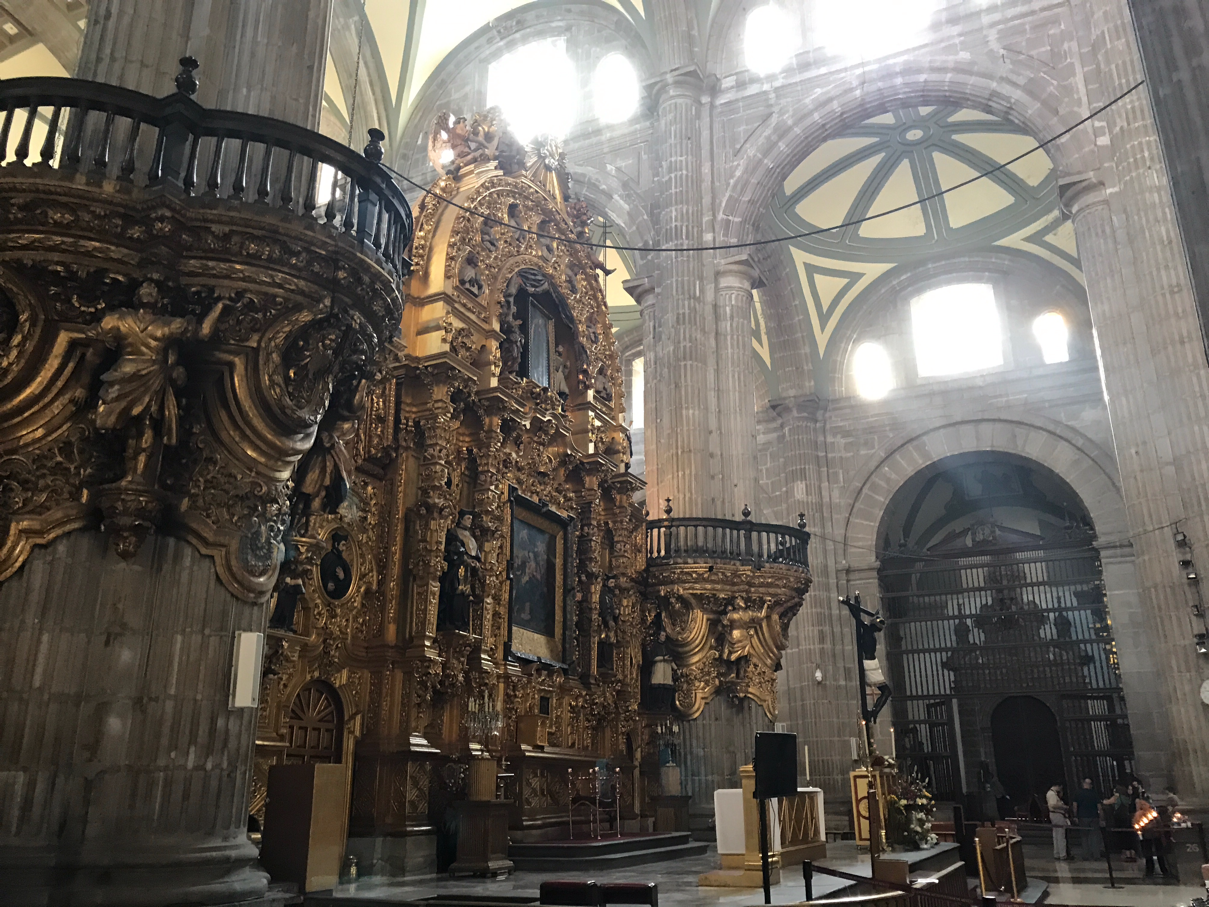 The sun was shining harshly by the time I got out. The old town is teeming with people anywhere you go, almost all of them local or Central/South American. I expected more Americans and Europeans, but I guess they’re all in the beach resorts in Cancún, Puerto Vallarta or Playa del Carmen? Always the Only European Left Alive!
Next up I went to the Museo del Templo Mayor. In the 18th century they discovered the ruins of an ancient, pre-Hispanic temple of the Mexica people right here in the heart of Mexico City, and began excavations. Then, in the 1980s they opened a museum next to it to display the relics and artefacts discovered among the ruins. 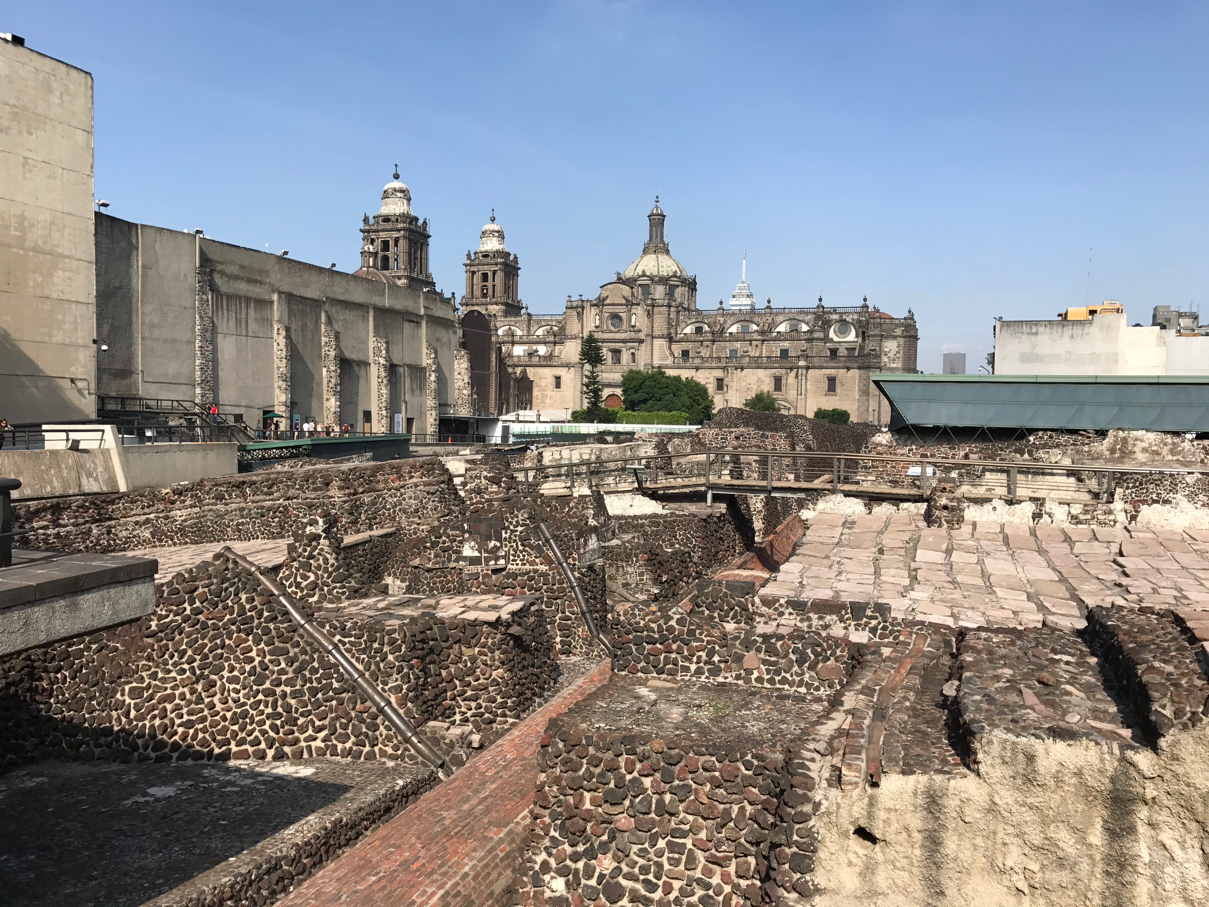 After paying for your ticket and leaving the bottle of water behind (annoying especially because you’ll exit from the opposite end of the block and will have to circle back for it!) you visit the digsite first. Although its archaeological value is immense, I’m afraid it’s not much to look at: only the foundations and layout are visible, with only two or three sculptures still in place to show you that an ancient civilization built it. The museum built next to it, though, more than makes up for it and took up a good deal of my morning. 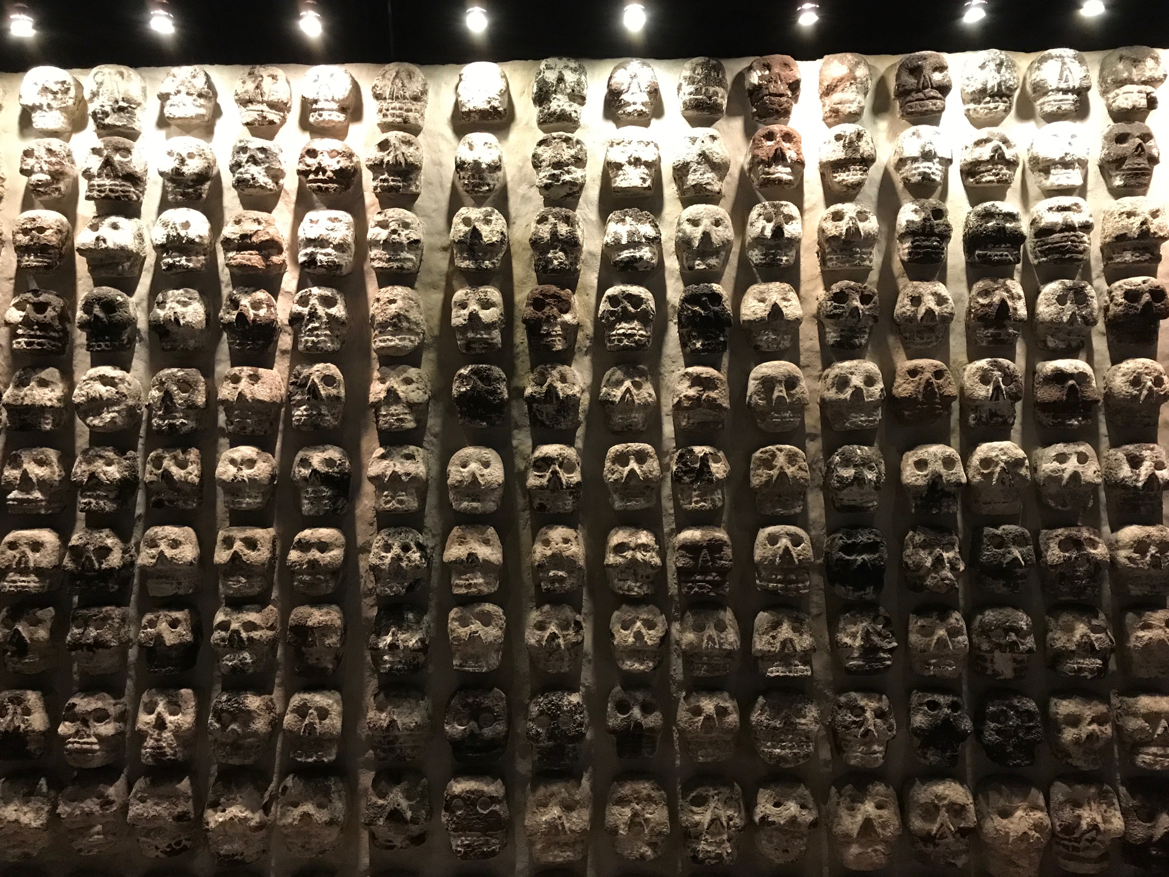 It features three large floors filled with all the different objects found in and around the temple ruins, organized by time periods and themes. The exhibitions really paint a detailed picture of life in the region before Cortés: tools, religious offerings, jewels, weapons, knives for human sacrifices (yikes), explanations on the agriculture and trade of the land… The biggest and most impressive pieces in the museum are two enormous bas-reliefs depicting fearsome goddesses with claws and wearing skulls on their kneecaps. They also have a few Spanish coins and trinkets from later times. All in all it’s a great chance to learn about a very distant civilization. The exit of the museum drops you right outside the entrance of the Palacio Nacional, a government office famous for its murals painted by Diego Rivera, so I went ahead and walked inside! The queue was empty, except for two Italian women who kept protesting because you have to give a form of ID to be admitted into the building (it is otherwise free) and the guard wouldn’t take the photocopies of their passports. “But it shows my DATE OF BIRTH”, one of them kept arguing, like that alone was the ultimate indisputable argument. Anyway, I got inside and followed the signs to an empty geometrical courtyard with a quiet fountain in the centre. 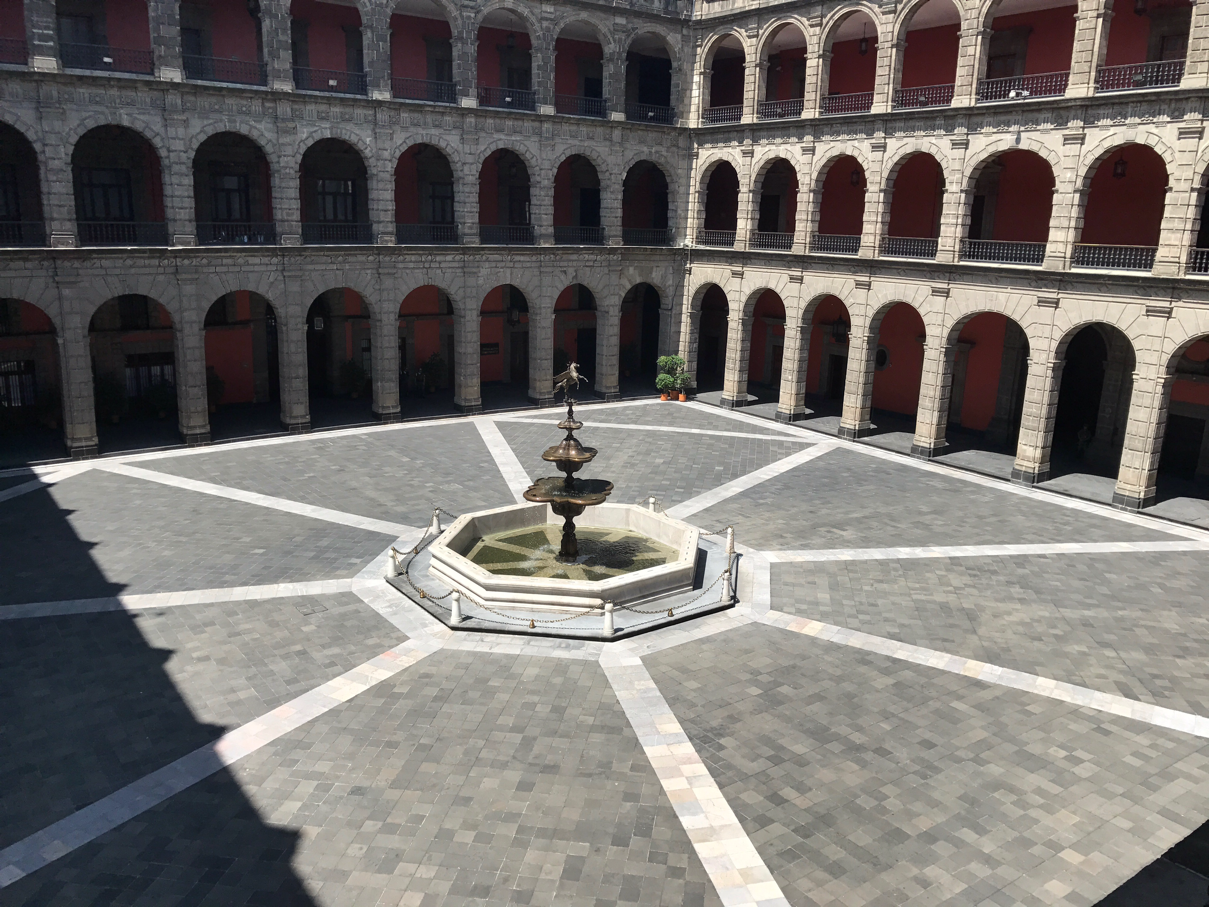 Diego Rivera’s murals cover the walls of the staircase in this section of the building, and they depict the history of Mexico from before the Spanish invasion to independence and to his own time. There are also numerous murals along the first floor, and that’s about all that you’re allowed to visit there. 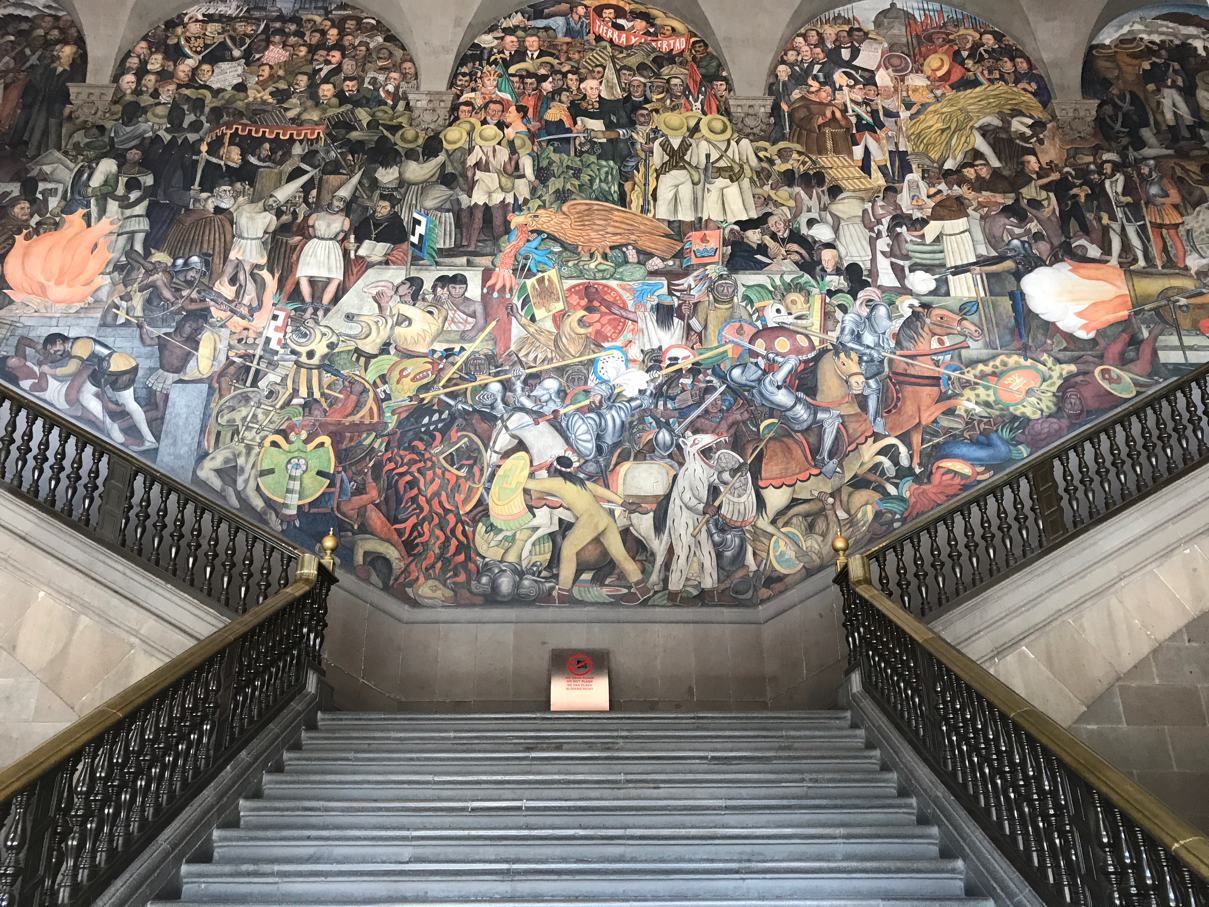 By now it was noon, and I was meeting friends for lunch, so I took a long, sunny walk along the long and wide Reforma avenue, where the old buildings give way to modern towers and corporations- also Starbucks at like every block, seriously. It’s hard to overstate just how vast Mexico City is, everything is farther than it looks on the map. Lunch was at Bellopuerto, a seafood restaurant in the Zona Rosa. I had a torta with tuna mi-cuit and avocado, and marlin and olives tacos. Wholly new combinations of flavours; a great start to my trip! And no small challenge: if fish names already vary a lot between regions in Spain, imagine in a different continent!
By the time I got back the museums were closed (the Palacio de Bellas Artes will have to wait for another day) so I decided to conserve my energy and go back to the hotel to plan for tomorrow. This is only the beginning!