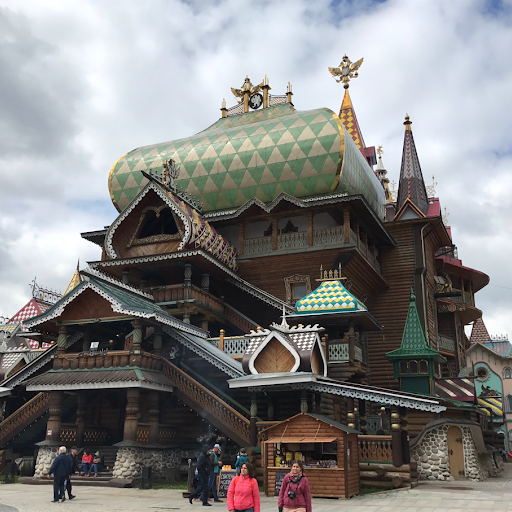 Alas, today is my last day in Moscow, and so today’s mission was to tie up loose ends.

The first order of business was to take a long metro ride up to Izmaylovsky Kremlin, a very strange but picturesque recreation of a traditional Russian fortress that I think was actually built in like 2007? (It’s so kitschy I assumed it was from the 1960s). It’s a recommended visit because of the markets leading up to and surrounding the kremlin itself. 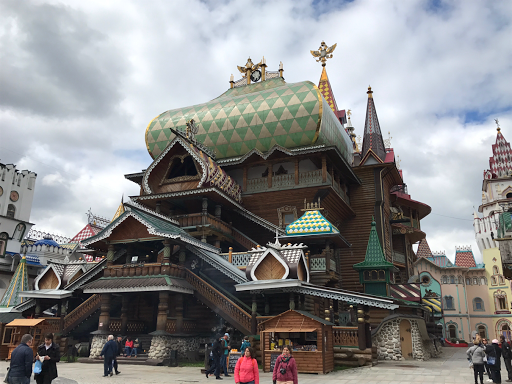 When we approached the place from the Partizanskaya metro station it was like 7°C, dark clouds all over, with freezing winds, and there were like old abandoned structures to the side, few people outside -it all felt very post-apocalyptic! But once we reached the market, we discovered two or three long, parallel rows of wooden stalls with hundreds of different souvenir sellers. I’m pretty sure this market boasts the highest rate of matryoshkas-per-cubic-meter in the world, but there are also lots of other popular souvenirs, such as shapkas, those typical Russian fur hats, or vintage USSR memorabilia like pins, badges, shoulder patches, Soviet propaganda posters (or as they were called then, “posters”) and for the less historically demanding, anything that you can put a star with a hammer and sickle on.
Since I leave tomorrow, it was now or never to get omiyage!
The majority of the matryoshkas are mass-produced and tacky/touristy -although also very cheap, as you could get an average-sized one for ₽300 (€4.8)- but there are a couple of shops mixed with all the others that make hand-painted ones with more stylised motifs. I found one stall with a very tasteful display, went off to compare, and then I was never able to find it again, so the lesson here is: if you find something you like, buy it or leave a trail of breadcrumbs to it! There are many rows and they all look the same! I also liked a stall with woodcarved objects and one that had little stylised reproductions of famous Russian buildings.
It is SOP to haggle, which I am terrible at, although I found that when I started talking to the sellers in Russian they would often take the first step in lowering the price; a far cry from the Grand Bazaar in Istanbul, where you are expected to haggle down to 60% the sticker price but it’s like pulling teeth (I suppose we’re all really cold here and want to get it done quickly!). Most people here were surprisingly friendly, even if I declined buying anything. 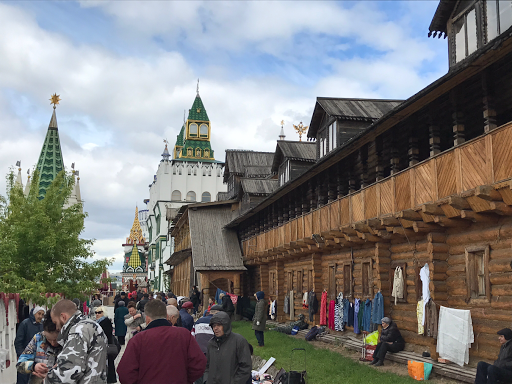 While the souvenir/tchotchke market is the first thing you see and is quite large, it leads to an even larger flea market all around the kremlin. There were more people here, all locals (I think we may have been early for the other one, or maybe the organised tours that seem to make up the majority share of tourism here do not bother to come all this way) with only a handful of foreigners. There are lots of different spaces and hundreds of stalls. Some were legitimately interesting, with old books, or antique cutlery or old watches; others were literally a blanket on the ground with stuff people found in their attic while doing a KonMari cleanup.
Eventually we made it inside the kremlin, and found it’s like a Disneyland of old Russia: there’s a central building that looks like a Viking town hall, with shields on the wall and dragons on the rafters, a tall wooden church modeled after a real historical one, and lots of pastel-colored buildings that reportedly emulate typical Russian architecture. I’d read that it’s a popular wedding destination, and even has its own “wedding palace” inside where people actually get married, and sure enough during our short time there we crossed at least three different couples either getting their picture taken around the place, or just leaving their ceremony to big cheers from the guests. All I could think was: I’m sure last year it seemed like a safe bet to have your wedding in June, but right now with 8°C that feel like 5 you’re probably wishing you’d waited for August. Although some brides did wear smart white jackets over their dresses! 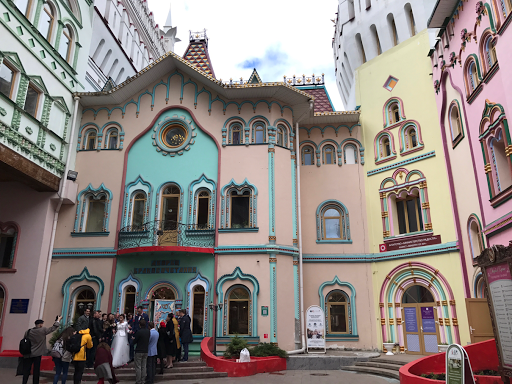 Once we were done with Izmaylovo, which took us all morning, we went back to the metro to visit the Novodevichy Convent, an Orthodox cloister built in 1524 (although most of the current buildings were built in the 17th century, still very old!).
We stopped to eat at a stolovaya beforehand, because it seemed like the only place to eat in the area, which seemed mostly residential and definitely not touristy despite the convent being highlighted in the Lonely Planet guide. The stolovayas (Russian canteens, if you remember) are great options when you want to have proper food -food that you sit down to eat with a knife and fork, as opposed to a sandwich- but don’t want to bother with a restaurant, waiting for the orders, etc. This one had lots of different options: Russian salads, meatballs, salmon, fried chicken, pasta, and different garnishes and accompaniments, not to mention a full range of desserts, all cheap. Really, the only downside is that in my experience so far the people working in them know like five English words total (three of them are numbers) and my Russian doesn’t fare much better, but they have lots of questions about your order: is it for here? Do you want it heated? What do you want as garnish? …which I can’t understand. But after some back and forth, we got our food! 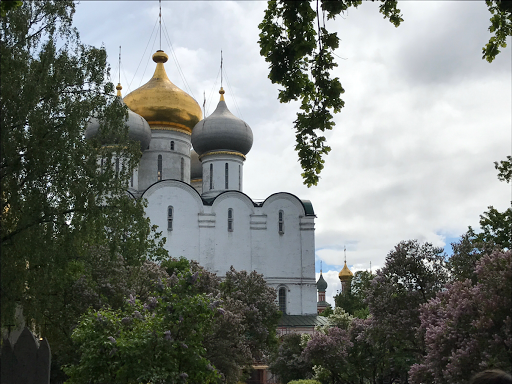 We got to the convent eventually, but unfortunately most of it was undergoing construction. That’s probably why we could just walk through the doors, because the guide mentions there’s normally an entry fee. The main church and the tall, golden-domed tower were both totally or partially covered in scaffolding and tarps, but we could still walk around the enclosure. I could see that without the construction, and with warmer weather, it must be a very pleasant place for a stroll: there are lots of fragrant trees in bloom, several different walks around green areas, and a few white buildings with golden Orthodox crosses on them.
We poked our heads into one of the open churches, and looked -unsuccessfully- for a door to the cemetery just outside the convent’s walls, and eventually made our way out. Right outside, from a grassy park around a pond, you can see the financial district’s skyscrapers in the distance. 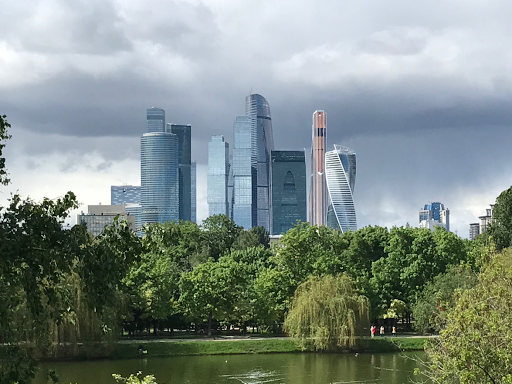 On the way back, after a long detour trying to find the Sportivnaya station (it’s moved several blocks away due to construction!) we thought we might stop and take a look at the Church of Christ the Saviour, another notable building, but they wouldn’t let us out of the appropriate metro exit (some event happening) and we were too tired to look for a way around, so we gave up and returned to the hotel, where I’m resting before going out for a last muscovite dinner.
It’s been a fantastic holiday, which has surpassed all my already-high expectations. The Hermitage is like nothing I’d seen before, and the ballet at the Bolshoi was an unforgettable experience. I have a feeling when I get back people will ask me if I liked Moscow or St Petersburg better, and I won’t know how to answer. St Petersburg is elegant and historic and cultural, whereas Moscow is vibrant and modern and varied. If you’re on the fence: visit both!