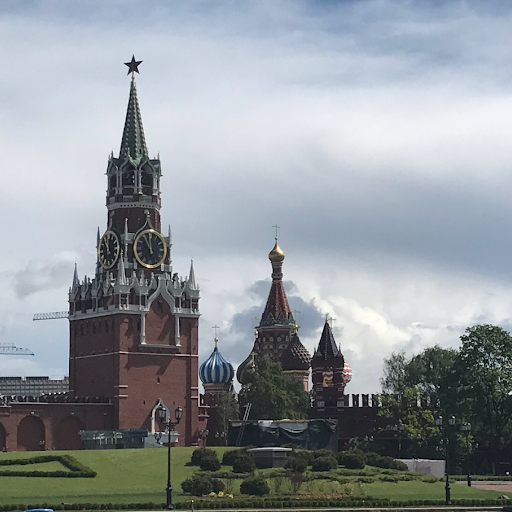 Today was finally Kremlin day! Sooooo of course we woke up to 5°C and howling winds and cold rain. When I left the hotel it didn’t look all that bad but I had to turn back for my umbrella and winter sweater. When I packed, mind you, the weather forecast announced 20°C and sun for Moscow. I never agreed to this!

The Kremlin is just one metro stop away from our hotel in lower Arbat but it took us several tries to find the right exit, because as you know by now you can’t just take any exit and then find your way above ground, because roads don’t have crossings ever. Eventually we made it to the Alexander Gardens, a beautiful park with trees and fountains that’s right in front of the Kremlin walls, and where the ticket office is located.
The annoying thing about the Kremlin is that there’s a separate ticket for each thing you want to visit, and each ticket is sold in its own ticket window for its own price with its own queue, so you can’t just buy all the tickets you need in one go. This cannot be the most efficient way to handle this. Why not sell everything in all windows? Each customer would take longer but the turnover would be faster, right?
One ticket is the general admission to the Kremlin, which just covers getting through the walls and visiting the cathedrals inside. Another ticket covers the Armoury, which is the big museum inside the Kremlin, and another one serves the Diamond Fund, a separate exhibition that holds the imperial crown jewels; these two are in the same building and can be accessed separately. There’s also a ticket to get to the top of the oddly named Ivan the Great Belltower, which I keep parsing as “Ivan, the great belltower” instead of “Ivan the Great’s belltower” as if the boyars gave their churchbells nicknames. 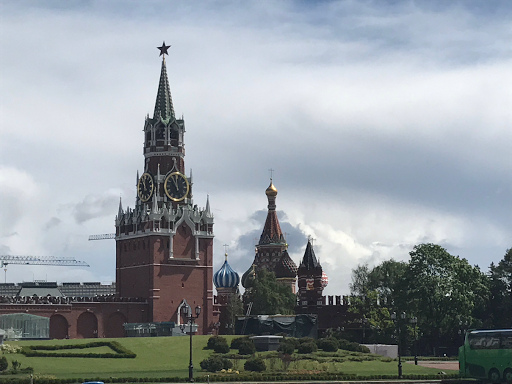 We were wondering what to get when a heavy shower suddenly broke loose above us, so we ran into the ticket office and just got the regular ticket for now.
The first impression when you walk into the Kremlin from the main entrance is bery serious and formal, because you first walk past the State Kremlin Palace, where Soviet congresses used to take place, and in front of the Senate, where the President’s offices are. Police officers were very liberal with their use of the whistle whenever a tourist so much as set one foot on the road around the Senate, which is kept well clear of any visitors.
The main tourist gathering spot inside the Kremlin is the Cathedral Square, where no fewer than three cathedrals, one belfry and one church stand side by side. I had no idea there were so many, or that they were so ancient: they were built in the 15th and 16th centuries, so they look very different from the more modern ones we saw in St Petersburg. Where newer cathedrals were more bright and airy, these are smaller and barely have any windows, but the lamps inside shine their light on ancient frescoes, paintings and icons. Some were designed by Italian architects as commissioned by the emperor, oddly enough. The Assumption, Archangel and Annunciation cathedrals can all be visited with the general admission ticket, although queues are easily formed due to the limited space inside. 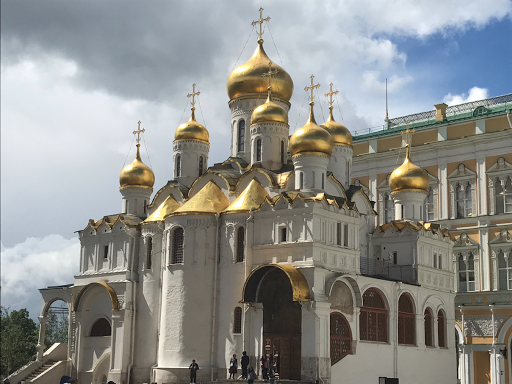 After the historic cathedrals we walked around a bit, but there’s little else to do on the general ticket, so we took off for lunch at the Ritz-Carlton nearby -not that we are the intended demographic for the brand, to put it mildly, but we’d read that the rooftop terrace had great views over the Kremlin. In reality it’s not much higher, so mostly you see a large chunk of wall, but as we got there literal hail started to rain down on us so we stayed inside and ordered the cheapest items on the menu, hoping they wouldn’t smell the poverty on us. This is no Tokyo Park Hyatt, is what I’m saying (that one I emphatically recommend).
In the afternoon I went back on my own to get tickets to the Armoury and the Diamond Fund. At around 14:00 I only had to wait for 10-15 min for the former, and only 5 for the latter (all these tickets cost between ₽500/€8 and ₽700/€11 each, so they do add up if you want to make the most of it). I then immediately went off to the side entrance, because it’s possible to use a separate, direct entrance just for these two exhibitions instead of having to go through the Kremlin proper.
I was a bit worried about my timeline, because the tickets are given out for specific sessions to regulate the public flow, and I had the diamonds at 15:00 and the Armoury at 15:30. It was 14:30, so I thought I’d try to go into the Diamond Fund early. The guard at the building’s gate looked at the hour in my ticket and said something to me in Russian, but when I replied in English he just gave up and opened the door for me.
Inside, there was a waiting room with a desk and two guards at the end with metal detectors. I approached the desk and gingerly asked if I could just go in now (because the Russians go in a guided tour, but the foreigners just get audioguides so it’s not like anybody cares at what time I go in). The lady behind the desk said absolutely nothing and simply took my ticket, so, yay? The lady next to her, which looked a bit like a rotund, Russian Judi Dench, however, did speak some English and called me over.
“Why you no take audioguide?!” she said, offended. (You have to imagine all her lines three decibels louder than mine.)
“Oh, um, no reason, happy to take one.”
“What language?”
“English is fine.”
“Where you from?”
“From Spain. Ispansky!”
“But I can give you Spanish!” (meaning, the audioguide was available in Spanish as well)
“Oh, that’s okay,” I went, “I actually prefer to keep the English one.
Well I’m tellin’ ya, this blew her mind. I mean, I guess it’s strange, but in my experience when travelling outside of Western Europe the translations and narrations are better done in English than in Spanish, either because institutions spend more money on them or because good quality providers are easier to come by in their parts of the world. So I tend to play it safe and just get the English ones.
“You are Spanish, but you speak in English!” she kept saying.
“Yes, haha?”
I didn’t know where to go from there, so I tried to just go through security but the guard turned me away and told me that I couldn’t go in unless I checked my jacket at the cloakroom (it’s a normal jacket, and I wasn’t carrying any bags or anything). I wasn’t about to argue, but as I was going back the lady behind the desk stopped me: “Where you going?!” I explained, she huffed, and then she began yelling at the security guard across the room to let me in. She would point at me and yell, and the guard would shrug and shake his head, and back and forth like that until she had to admit defeat.
She motioned me to go to the cloakroom with a resigned shrug and said, “Best security.”
The Diamond Fund is well worth the trouble. It’s only a small two-room exhibition, but the riches on display have nothing to envy from the Crown Jewels at the Tower of London. They have the imperial crown, orb and sceptre, the latter of which features the massive Orlov diamond, large as a walnut.  They have rings, earrings, bracelets and tiaras, but also military medals, imperial regalia, and loose diamonds. In fact, there are entire boxes just filled to the brim with diamonds, like maybe the maids of the tsars sweep under the beds and find a dozen 100-carat diamonds that they just empty into boxes. There was an emerald the size of an egg, and a set of jewels made in the 1970s among the antiquities. Most of these diamonds apparently come from the Urals, here in Russia. Whereas the Hermitage’s Diamond Room was really about showcasing the artisanship and craft of making jewels, this exhibition’s focus is on the stones themselves. So shiny!
(I’m sorry there are no pictures. They make you turn off your phone and every single guard there looked ready to send me to Siberia.)
When I left, the lady behind the desk collected my audioguide and beamed, “Beautiful?” I said, “Kak krasivo!” which was met with her approval. 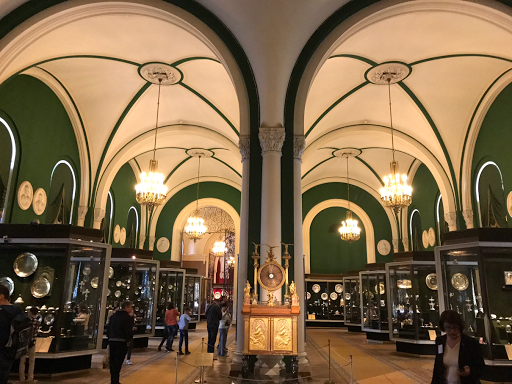 The armoury, meanwhile, is much larger and much more diverse as an exhibition. There’s a set of Fabergé eggs of very different styles and materials, a fine collection of antique ceremonial arms and armour, several elaborate dresses from the empresses, and, interestingly, a dozen carriages, coaches and sleds that belonged to the imperial family. Some of these carriages were as big as a modern bus, including the wheels and yoke, and many wouldn’t look out of place in a Cinderella movie.
The finishing touch to a day full of history was a ballet at the Bolshoi! There weren’t any available performances at the old stage, but I got us tickets for La Sylphide at the new stage, which is right next door. Despite its name, the new stage is a beautiful classical theatre, with grand chandeliers and staircases. 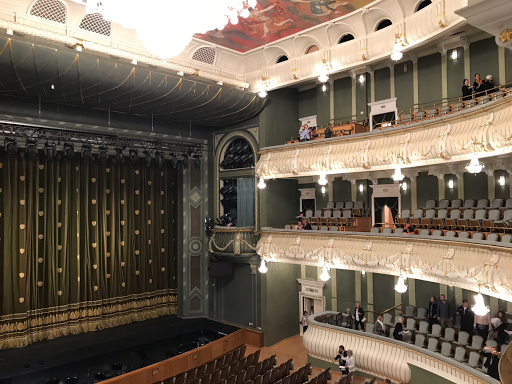 The show was absolutely amazing, with incredibly talented performers who did impossible things with their bodies. The titular sylph in particular seemed to float above the stage like a weightless vision, which is of course the whole point of the character (this ballet is one of the oldest ones that have survived, and was the one that generalised dancing on pointe). The music was played by a live orchestra, adding to the experience. Getting to see for myself that the Bolshoi’s reputation is well deserved, in such a beautiful setting, has been a privilege. If you come to Moscow, book a ticket well in advance!