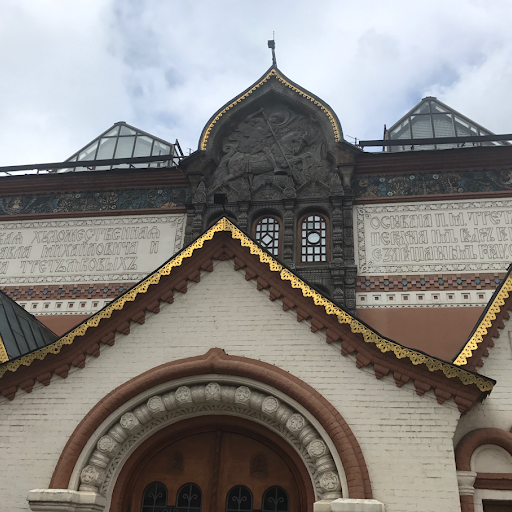 We’d learned that the Kremlin closes on Thursdays, so our plan today was to visit the Tretyakov Gallery, Moscow’s largest collection of prerevolutionary Russian art. It is the city’s best known art museum along with the Pushkin Museum of Fine Arts, which deals in European painters, especially Impressionists. When choosing which of the two to visit, we decided we’d overdosed on European art in St Petersburg and opted for the Russian side of art history.

Google Maps makes you think metro connections aren’t very good because it thinks the differently named stations aren’t connected even when they are, but in reality Tretyakovskaya is only one transfer away from Arbat (plan your itinerary looking at a map of the metro rather than by app!). We got out of the station and onto a cloudy morning with a chance of rain, just a few minutes after the gallery’s opening time. There was a short queue to enter but once inside we had the entire first floor to ourselves -people kept trickling in but it wasn’t until we got to the second floor that it began to feel crowded. 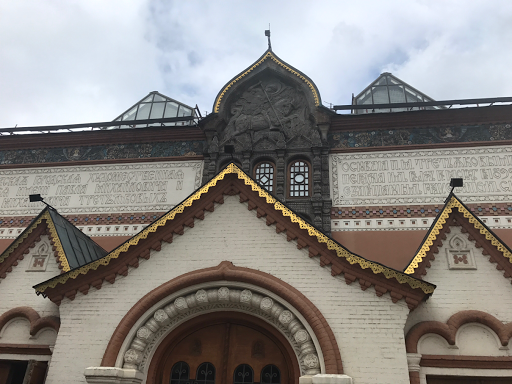 The building itself is nothing to write home about -how spoiled I have become after seeing so many architectural fantasies in a week- but the collection of paintings is magnificent. I knew pretty much none of the paintings or artists exhibited here, which is an indictment of my Eurocentric education more than of the collection’s notoriety: they have some of the most famous works by the most celebrated Russian artists. I was especially taken in by Valentin Serov’s portraits, all of them luminous and full of life, and Viktor Vasnetsov’s whimsical pictures of fairytale princesses and flying carpets. There is also a harsh dose of reality from depictions of life in the 18th and 19th century Russia. Really every genre is represented: portraits, landscapes, murals, religion, literature, historical figures, battles, urban life… It is a fantastic crash course on Russian art history and inevitably, through it, Russian history. 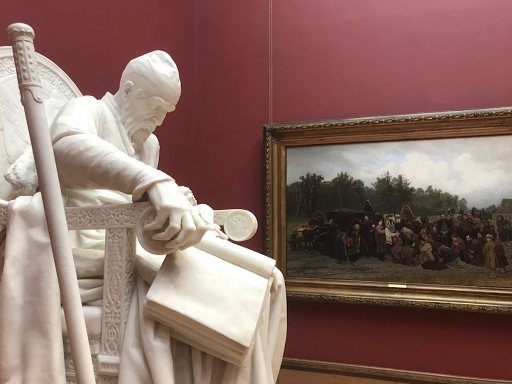 We’d seen every room in the museum before noon (several were closed off for renovations) so we went up to the Red Square just one metro stop away. Some clarification about the geography of the place, since we always mix the names up: the red building with all the colourful onion-shaped domes that we always see in the news is St Basil’s cathedral, which is on one end of the Red Square. The Kremlin (Russian for “fortress”) is a massive, walled off citadel of which just one wall runs the side of the Red Square; in fact it is accessed from the opposite side, from the Alexander gardens. The remaining two sides of the square are bordered by the GUM mall and the National History Museum.
Today we walked into St Basil’s, which I didn’t get to do yesterday. It’s smaller than it looks on TV, but no less beautiful with every dome painted in different colours. It turns out the ticket costs ₽500 (€8), exactly twice what the Lonely Planet guide says; I wondered if it was the “foreigner tax” but the price seemed to be the same in the Russian text on the window, so who knows? 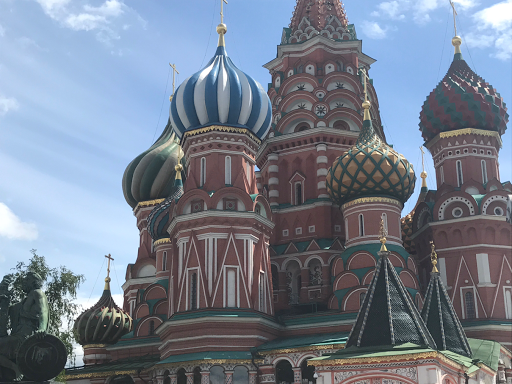 I was astounded to discover that the church was built as far back as 1552, on the orders of Ivan the Terrible, although it has received restoration works several times since. I also assumed the interior would be one big open space, but in fact the interior of the church is a series of narrow corridors connecting up to nine different chapels across two floors. Interestingly, every dome you see on the outside covers a separate chapel with its own saint and icons. The walls and ceilings on the corridors and stairs are all painted with leaves and flowers, whereas the chapels are covered in religious frescoes or painted clean white, presumably more recently. It’s beautiful and full of history, but because of the architecture it leaves a memory of small, cramped spaces rather than one general impression. 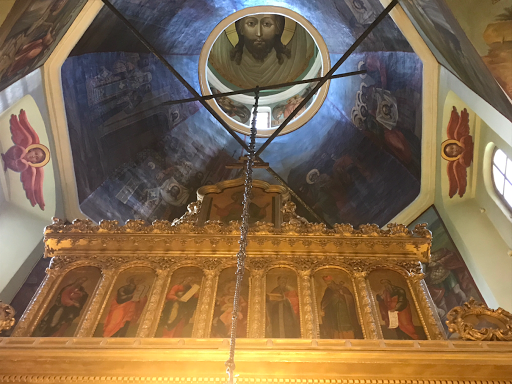 Next, we peeked into the GUM, the enormous shopping centre that used to be a state-run department store in the times of the USSR. It is now a rather upscale mall with lots of high street fashion boutiques, but it’s nonetheless worth walking into for its elegant Parisian-style architecture, mixing stone with iron. Although it occupies a large surface, the mall is laid out as three narrower, parallel “streets” with two floors each and a third floor with a few cafés. We made a beeline for this floor as we’d been advised to check out the stolovaya there -a typical Russian workers canteen. It seemed to have common everyday food, and would have been happy to eat there if not for the fact that as we were looking at the food an entire busload of kids stormed into the place, instantly creating a massive queue between us and our nutrition. We desisted immediately but were too tired to go anywhere else, so we just went into a café next door to eat. And to rest. Mostly to rest. 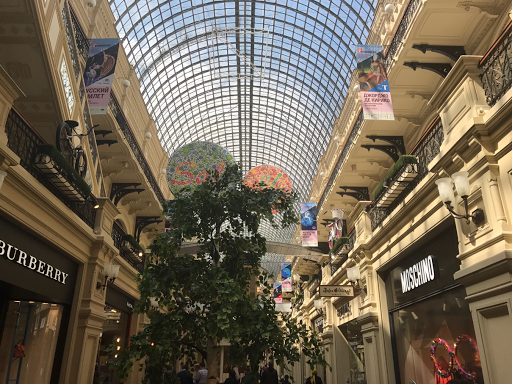 (Once again I ordered everything in Russian!)
On our way out we did run into the Gastronom, which is like the food section of Harrod’s except organised as a narrow rectangle than runs the length of the building. As often happens when checking out fancy delicatessen stores abroad, it’s funny to see the most common food from your country (Spanish olives, French tuna cans) elevated to the status and prices of exquisite imports. It’s also interesting to discover there are entire subcategories I never think about, but people put into their mouths, like entire dried fish.
I have to say I rather like these places that kept their antique architecture and decoration: it’s a look back at the place’s history, and it’s not like there aren’t also plenty of modern buildings to carry the torch and push the envelope.
We walked around a little bit, but by now we are tired as soon as we wake up, and can barely stand up straight by three o’clock in the afternoon, so we need to replenish what little energy we can in order to discover the Kremlin tomorrow!
(Because I write these in the afternoon I don’t get to include our shenanigans when we go out for dinner afterwards, but yesterday we went to a pleasant Uzbek restaurant right next to the hotel called Vostochny Kvartal where they again spoke no English at all. Ordering was a bit tricky, because every time I ordered an item in my broken Russian I would be showered with long followup questions that I couldn’t even begin to understand. When I said I didn’t understand, the poor guy would just rephrase in equally long indecipherable sentences. In the end we had a great dinner and we somehow got everything we wanted, except for when we ordered normal bread and instead of lavash we got Georgian-style khatchapuri, with cheese, which is almost like a pizza. We ate it anyway. It was delicious.)