Today was another road trip day! Reader, I was just as excited about sitting for two hours as about the actual destination.

The mission was to go to Puebla, a city east of Mexico City notable for being one of the first towns that the Spanish founded from scratch. The city’s historic centre is a Unesco World Heritage Site for its colonial architecture.
I took the metro, which again wasn’t too bad for being rush hour, to San Lázaro. Confusingly, the metro station’s called San Lázaro but the bus station right on top of it is called TAPO, and it’s an enormous building with lots of tunnels and a big round central section. Once I found my way around, I went to the Estrella Roja counter and got a first class ticket to Puebla for $180 (€9). The first class bus seats are super comfortable, which was important because resting for several hours was to be pretty much the highlight of my day, but I was dismayed to find out that they play movies during the trip and they pipe the sound through the bus’s speakers -so I had to spend the entire trip trying to drown out the insufferable screeches of a wretched cartoon with my music.
The trip took a hair over two hours and dropped me off at CAPU, Puebla’s bus station which is nowhere near the historic centre. Between TAPO and CAPU, I do wish stations had more serious names! I took a cab to the Zócalo, the square at the centre, and rode for a good while through some heavily rundown neighbourhoods before getting there. 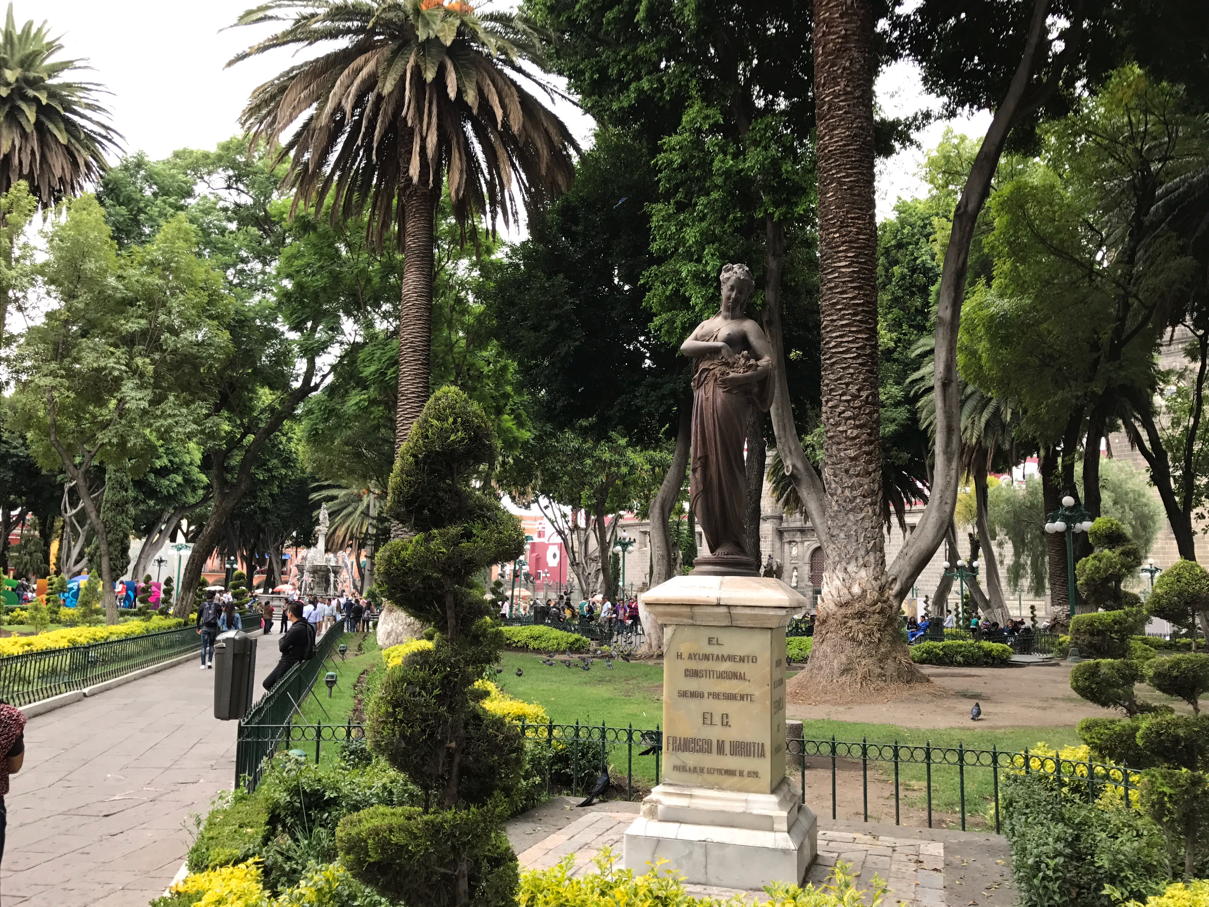 The Zócalo is a large square with lots of trees, with arcades of cafes and restaurants on three sides and an impressive cathedral on the other. I began by walking into it, and though I don’t think it’s bigger than the one in Mexico City’s own Zócalo, it felt more spacious inside, like it has more room to breathe.
Then I walked a couple of blocks down to Museo Amparo, an unexpectedly avant-garde anthropology museum focused on Mesoamerican cultures around 600-900 AD. The combination of white walls and glass form an elegant backdrop for the exhibits, which include a small exposé on the glyphs the Aztecs used to write. I also dropped by the Culture House, famous for being the home of the Palafoxian Library: built in the 17th century, it is the first public library to open in the American continent! It’s small but beautiful, tucked away on the second floor of the building, with delicately curved wooden shelves, a gilded altar at one end, and Spanish tiled floors not entirely unlike the ones you can find at many Versailles houses today! 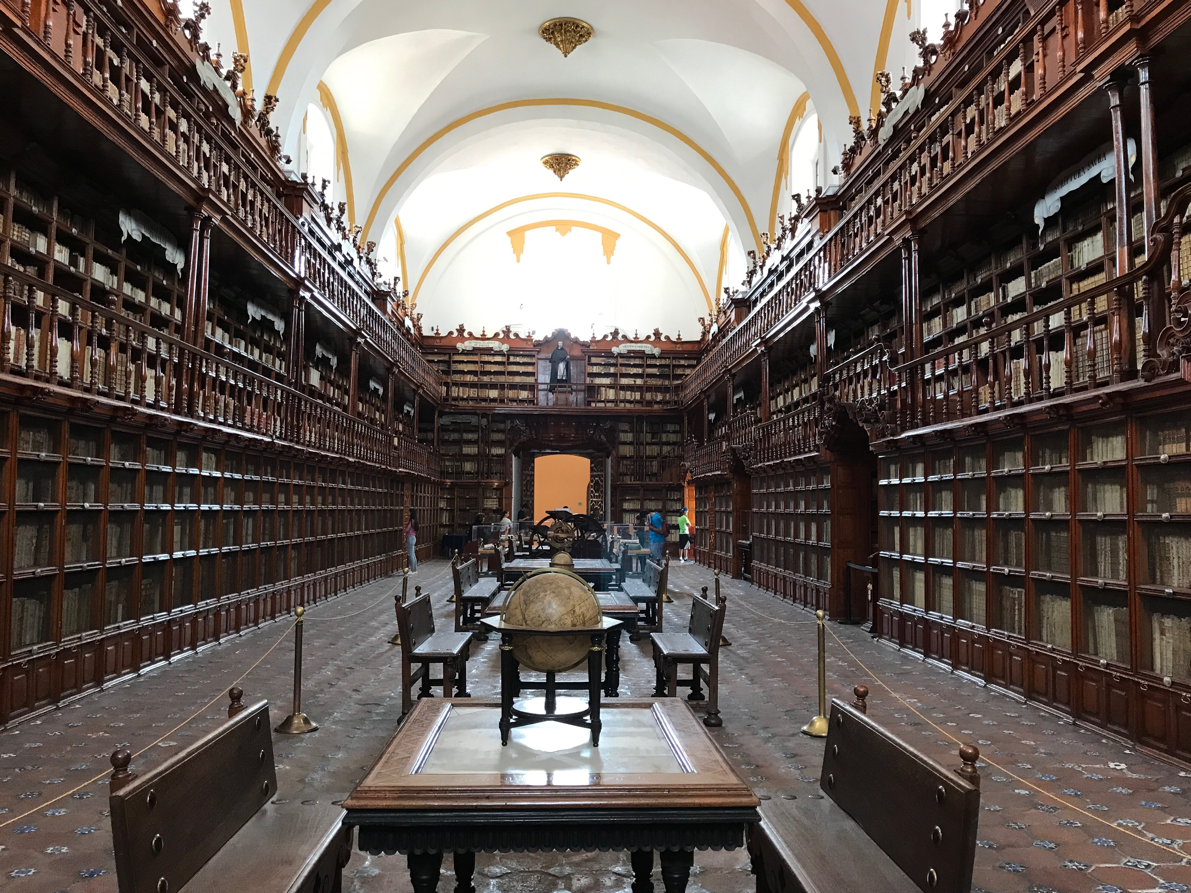 All through Puebla’s old town, which is built on a grid with numbered streets, there are many buildings with Spanish colonial facades: cast iron balconies, colourful ceramic tiles, earth tones and pastel colours… It’s a pity that all the streets are open to traffic, because without the parked cars you could really picture what this place must have looked like two or three hundred years ago.
Lastly, I dropped by the Parián market, a three-row open-air market packed with dozens of indistinguishable souvenir stalls. I didn’t find anything enticing. The town is known for its Talavera pottery, but the blue-and-white ceramics look so much like the ones that you can find in most Mediterranean countries that they almost failed to register! 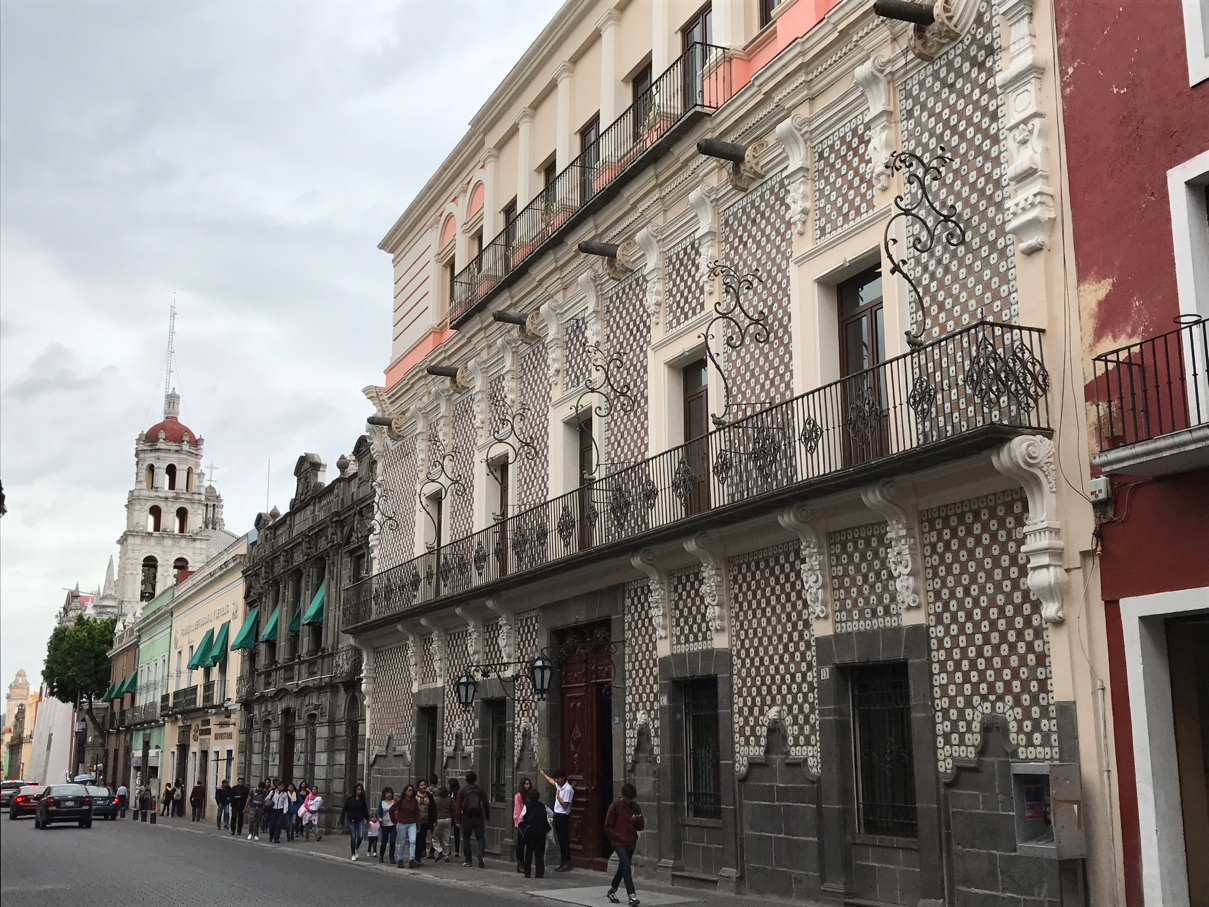 This was mostly what I’d set out to see, I was exhausted and I had several hours of journeying ahead of me, so I decided to call it a day at this point and got an Uber to the bus station, and from there another restful two hours back to Mexico City. When I arrived, it was raining, the first time I encounter the supposedly daily showers that happen around 18:00-19:00 during the rainy season. All things considered, I’ve been very lucky with the weather!