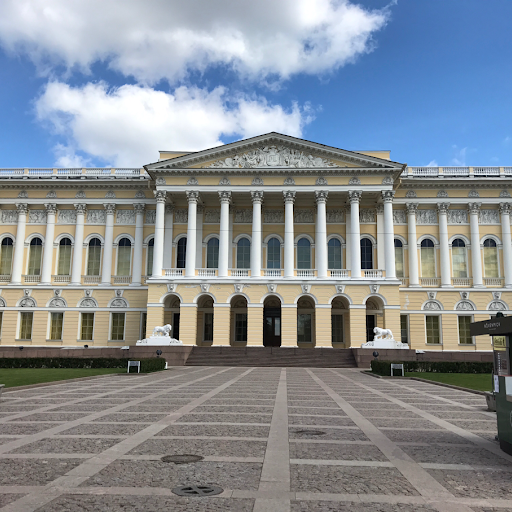 My time in the city of the tsars has come to an end! This morning I took a seemingly endless cab ride to Moskovskaya Station; Nevsky Prospekt is a very wide and long, straight avenue, but there’s so much traffic that it takes forever to ride along. Sidenote: does anybody else find it confusing to call St Petersburg’s main train station “Moscow Station”?

We had verified online beforehand that Moskovskaya has a left luggage facility, so I dumped my bag there in order to spend the rest of the morning unencumbered. The signs inside the station were almost exclusively in Russian, but I managed to find a small window where a man took my bag for a fee (on the way out I found there are also automatic lockers across the hall that are cheaper, oh well).
Once that was taken care of we called an Uber, which in retrospect wasn’t a terribly smart thing to do in a station square teeming with taxis, but we didn’t get into trouble and took another long ride to the Russian Museum. Although the Hermitage understandably gets all the glory as far as Peterburgian museums go, it’s first and foremost a collection of Western European art. The Russian Museum, as hinted at by its placeholderish title, focuses on paintings by Russian artists and boasts a reportedly impressive collection. 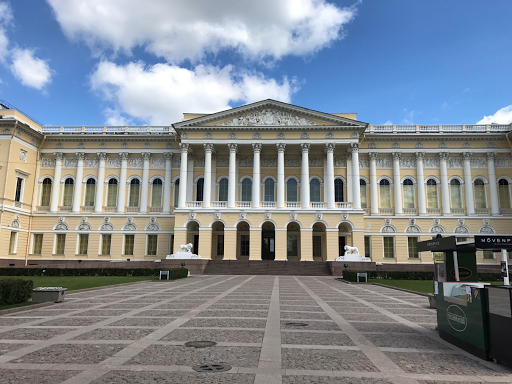 I say “reportedly” because… it was closed today!! And we only found out when we walked up to the front gate, which had a small sign saying “The museum is closed” and smaller underneath: “The day off is Tuesday”. The idea of Peterhof and other places being shut on Mondays had become so ingrained that it didn’t cross my mind to check whether the Russian Museum was open… So that was a trip across the centre for nothing, and now I don’t get to see the museum unless I come back sometime in the future! Well, it comes with the territory with travelling, when you only have so many days to do way too many things.
So as long as we were there we took a leisurely stroll down Nevsky Prospekt towards the station. We stopped at Sever, an old-fashioned institution in Peterburg, although you’d never guess it from the plain storefront; I’m tellin’ ya, no other tourist in the city has as many brilliant insider tips! It’s a pleasant café whose main features are several rows of displays with literally dozens of cakes, biscuits, cookies, cupcakes, chocolates and all kinds of desserts. There are fantasy cakes with lots of shiny fruits, bizarre constructions of all shakes and sizes, and also mainstays like cheesecakes and chocolate cakes.
For this I rose to the occasion and made our entire order in Russian, not a word of English! I don’t know how to decline the numerals, but other than that I think I fared pretty well, if I do say so myself. I finished my order with a triumphant “And a GREEN tea!” and the lady behind the counter gave me a grimace of the mouth and a shrug of the shoulder and was all like “meh” without saying a word. Dude, not even points for effort?!
After that fantastic pit stop we kept walking and found Kuptsov Eliseev, a wonderfully restored Art Nouveau food and confectionery store. The turn of the century architecture is striking from the outside, but the inside is even more spectacular, with café seats arranged around a giant palm tree and lots of different displays and stands with all sorts of colourful gift packs, from tiny liquor bottles to chocolates in the shape of coloured Easter eggs to nut mixes to oils and vinegars. The store has a balcony from which two figures perpetually greet visitors, and wherever you look there are modernist fixtures and decorations that really make it easy to imagine the lords and ladies of old taking their afternoon tea here in society. 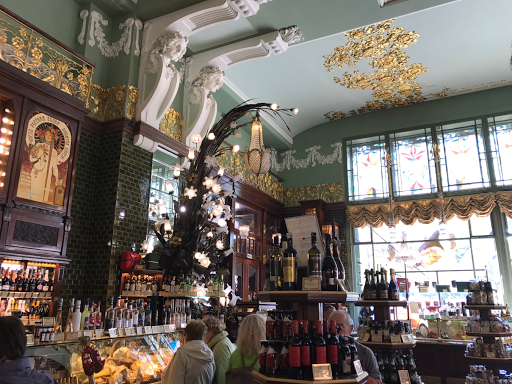 This walk made it even more apparent that in St Petersburg generally it was very unusual to see any storefronts; since every single building is an old palace, even if they’re now private, there’s simply no façade real estate for a shop window, so at most they only have a sign outside that tells you there’s a shop inside… if you even notice, that is.
Back at the station, I recovered my bag, bought a sandwich at a kiosk and got on the 13:00 Sapsan train to Moscow. The very cheapest class of seat was perfectly adequate, with plenty of room for my bag, and I had previously reserved a window seat in the direction of travel, so I was all set! As expected getting to rest was fantastic after so much walking, although by the end of the four hours it takes from beginning to end even I was getting bored. The landscape outside my window was green pretty much the entire time, only giving way to buildings and factories closer to Moscow.
We arrived in Moscow with perfect punctuality… but at a completely different station!! My ticket, bought and printed several weeks ago, said we’d arrive at Oktyoberskaya station, but when I walked off the train I discovered I was at Kazanskaya station instead! For a fleeting, panicked moment I feared I’d got off the train too early, but no, it was in fact the terminus and everybody had disembarked. They must have changed the itinerary after I bought my tickets?
I decided to brave the metro with my bag and bought a ticket -surprised to see that even single-use paper tickets work with contactless turnstiles. Technology! It took me a minute to make a suitable itinerary because, as in St Petersburg, metro stations here have the annoying habit of displaying different names for each available line; it’s as if Oxford Circus in London was only called that if you took the Central Line, but for the Northern Line it was called Regent Street. It makes it harder to tell if you can change lines at a station! Whose idea was that?!
In the end I only had to change lines once and needed less than half an hour to arrive at my hotel, which is right at the foot or Arbat street. I dropped off my things and took a walk up and down the street to get the lay of the land. It’s a very busy, touristy pedestrian street with lots of tacky gift shops and lots of cafés and restaurants; some clearly tourist traps, some big national chains, and some that looked acceptable. I had dinner at a Georgian café while some guys outside breakdanced for the passersby with… varying degrees of skill, I’ll generously say, although it was definitely nicer to have them outside than some of the street musicians further down. 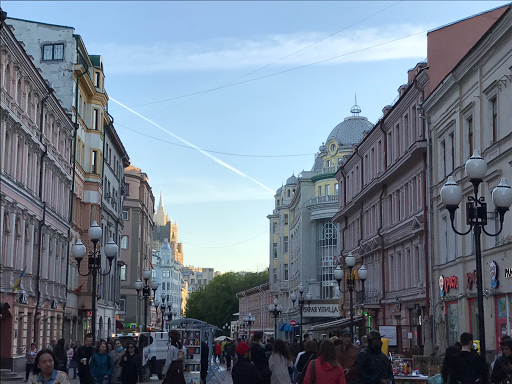 This reminds me, we had dinner at a Georgian restaurant in Vasilievsky Island last night, most authentic -Sakartvelo, if you want to look it up. It was us, the waiters who spoke not a single word of English (thankfully their menu had English translations already, and I acted as interpreter with what little I could offer) and four Russian grannies at the next table who were going through their red wine like it was going out of style. It took over twenty minutes for the food to arrive; by the end I was starting to fear the restaurant was just the cover for an undergroung fight club and the grannies were the bouncers. I’m told Georgian food is a must-have when you’re visiting in Russia, and indeed everything was delicious. They make a really yummy bread, often with melted cheese or an egg in the middle, which tastes a bit like a naan but fuller in texture. When we left, we were full and the grannies were five sheets to the wind.
I walked back to the hotel just as it was starting to get dark; at this time of the year, it can take literally hours for the sun to fully set. On the way back I discovered that there’s a Paul right next to the hotel, along with a giant supermarket, so that’s all of our food needs taken care of for the rest of the trip! Plus everything here opens until 23:00, so I absolutely walked in and got myself a pain au chocolat for dessert! Welcome to Moscow, me!