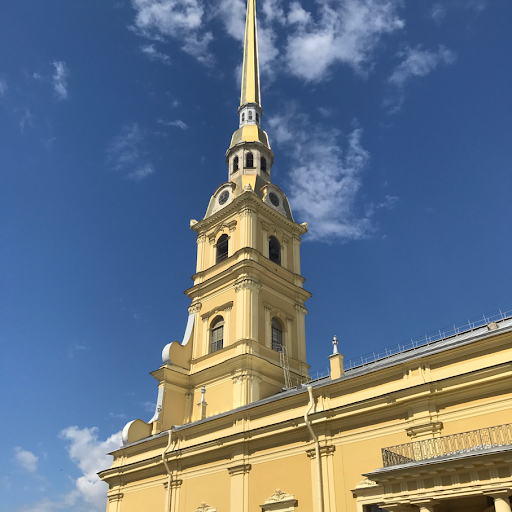 Getting up and walking is becoming harder every day! Tomorrow’s four-hour train ride to Moscow is starting to feel very attractive right now!

Today we took the busy metro down to Nevsky and then up to Gorkovskaya to visit the Peter and Paul Fortress, a military encampment from which the city of Saint Petersburg eventually grew. It occupies its own island and houses several structures inside its walls.
(Sidenote: every time I researched something on Google about the fortress and started typing “peter paul…” it would auto-suggest Peter, Paul and Mary instead, and now I have Leaving On A Jet Plane stuck in my head, and perhaps now so do you.)
The main attraction on this fortress is the cathedral, which itself isn’t very big but features a very tall golden spire that can be seen from miles around. We walked towards it as soon as we entered the fortress from one of the bridges, after buying a ₽600 (€9.50) ticket that allegedly gives you access to all the different sites. On arrival, though, we were dismayed to find the mother of all queues before the cathedral: five-people deep, and so long that it crossed the entire square and disappeared through a giant gate on the walls, presumably into infinity. Most if not all of the people in the queue belonged to organized groups (you could tell because of the guide’s umbrellas or signs sticking out at regular intervals), so we walked over to the information booth to ask if that was seriously the only way to get in. The lady in the booth said yes, but if you come back in 30 minutes the queue will be gone, this is all because we just opened. 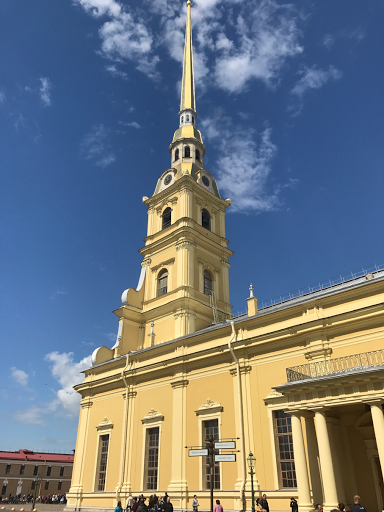 So we went off to look around. There’s a prison that was used to lock up bolsheviks before the revolution, but it’s literally just a series of corridors with cells that barely have any displays or information. Skip!
We tried to go up the ramparts to see the views, but it turned out that requires an extra ticket, so the full access ticket is a big fat lie. Skip!
We peeked into one of the exhibits inside the walls, but it looked dire, like it hadn’t been touched since the Soviet era. Skip!
We were distracted a bit by a group of differently uniformed soldiers doing formations, short parades, and playing marching music in a small square under the fortress’s watchtower. It was just them and us tourists, and there wasn’t any discernible purpose to the marching or forming, so I assume that they must have been training. 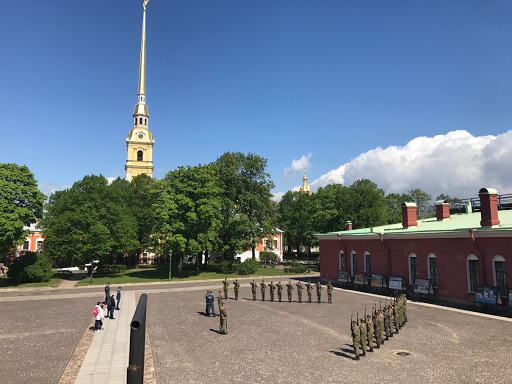 When more than half an hour had passed, and we were certain that there wasn’t anything else interesting on the whole island, we made it back to the central square to discover that the enormous queue WAS EXACTLY THE SAME. The booth lady’s reassurance: big fat lie!
There was no question of actually doing the queue (based on number of people and velocity, I estimate it would take… several years?), but it felt terrible to just leave after we’d paid €10 for not a damn thing, so the thought creeped into our minds… What if… we just jumped it? We noticed that right at the door there was a noticeable stream of individual visitors who just walked into the door along with the groups from the queue (it was in practice a second, smaller queue merging with the first) so we nonchalantly walked over like nobody’s business and got inside the cathedral in like two minutes flat. Sucess! Also guilt! The inside of the cathedral is a Baroque mix of gold, blue and green fixtures, engravings and paintings. It is indeed not very large, and the immense crowds made it feel cramped. The gold iconostasis is so tall that it actually pokes into the dome above. In addition to the space itself, the cathedral is notable for housing the graves of the tsars; several of them are just placed overground, inside white marble boxes surrounded by cast iron fences. Nicholas II and his entire family are interred inside a separate room where their names are clearly displayed (unlike the others, whose signs were in old Cyrillic and were very difficult for me to decipher). There’s a grave for Anastasia too: I learned that her remains were positively identified by DNA in 2007.
After visiting the church, we were done with the island, frankly underwhelmed. At least we’ve already seen so many amazing things, but what about all these thousands of tourists in organized groups? What are they missing to spend an entire morning queuing for this? Give this one a pass. There are so many better things to see in Peterburg -and if you’re done with all of them, go beyond the city walls!
It was almost noon and we could barely walk, so we took a river cruise along the canals. It’s very important to have “sitting activities” in a trip, to sneak in some rest! As luck would have it though, no sooner had we boarded than big, scary dark clouds covered the sky and the temperature dropped sharply, so we retreated downstairs to peer through the window. 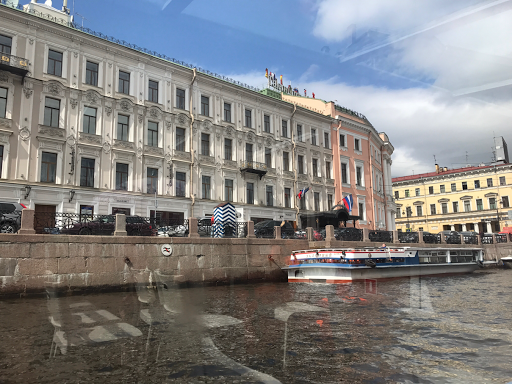 It is interesting to see the city from the river, and then from the canals. Interestingly, all the buildings in the historic centre follow the same style, have the same height and uniform façades, which must be the result of very strict urban laws. There were a couple of buildings that looked Soviet, but the very only contemporary construction I’ve seen is Mariinsky 2, a modern stone, glass and wood building right next to the historic Mariinsky theatre.
After the tour the fatigue had subsided into hunger, and since transport options were scarce we tried calling an Uber, which for just ₽100 (€1.6) took us all the way to St Isaac’s Cathedral.
I had been expertly advised to eat at Teplo, a fantastic restaurant right around the corner from St Isaac’s. It’s not super easy to find as you have to cross a courtyard and walk down some stairs, but as always a data plan is the best purchase you’ll make all trip. We were delighted to find a beautiful, eclectic place made up of several small rooms, all with different furniture and colour palettes. The day’s special was a delicious, creamy beef stroganov with boiled potatoes, so that’s another Russian staple crossed off my list! The waitress talked me into trying a local drink that was like berry juice mixed with honey, served warm. Did I have mead, like a viking? (I didn’t taste any alcohol)
The bill for starter, entree, dessert and drinks came in at just €6 per person, so on top of great food it’s super cheap! Spread the word!
After our very late lunch we walked over to St Isaac’s Cathedral, this time to look inside. Turns out that my move on the first day to go up to the colonnade and skip the interior was a monumental (GET IT?) mistake: the inside of the cathedral is a spectacle, the polar opposite of the gloomy Kazan Cathedral. It’s bright and colourful, and the gold is combined with malachite and bronze. 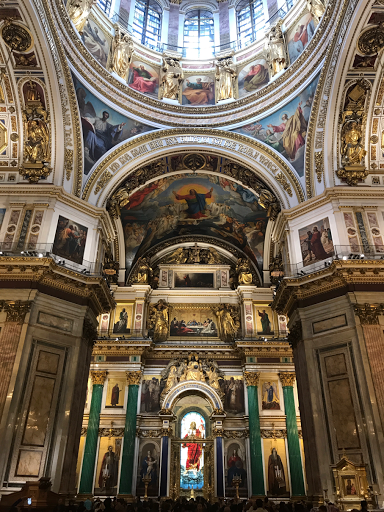 It is closer to what you would expect from a Roman church than from something like the Church on the Spilled Blood, although there are also numerous frescoes and mosaics. The giant dome, which on the outside is plated in gold, on the inside features statues of saints and angels alongside paintings and stained glass, and lets the daylight in. 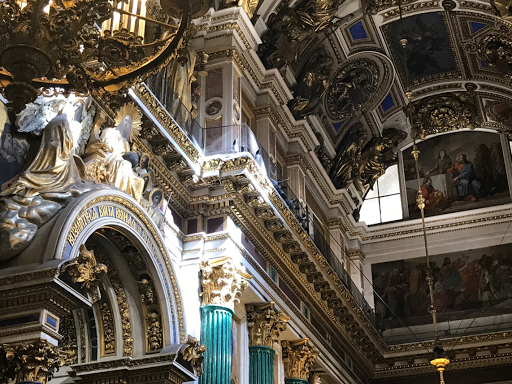 The place was also full of visitors, but unlike with the fortress, here I get why. Even after all the architectural wealth that I’ve seen these past few days, I was still impressed!
What a beautiful city! To think that all of these treasures had been here all along and I only just found out!