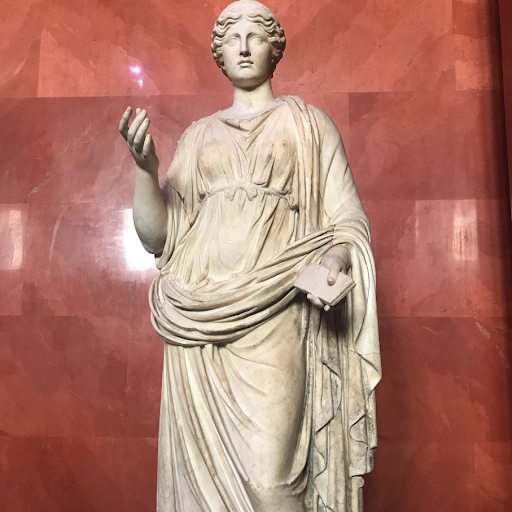 Today the first order of business was our second and final visit to the Hermitage, thanks to our two-day tickets. I heartily recommend them!

Yesterday’s visit was very thorough and exhausting, so today I wanted to focus just on a few exhibits that I’d missed. The first among them was the Graeco-Roman sculpture wing on the first floor, near where we went on the Diamond Room tour yesterday. There are actually classical marble sculptures all throughout the museums, but most of them are Neoclassical creations from the 19th century; the real Greek and Roman statues have their own exhibit, and it’s definitely worth a closer look. 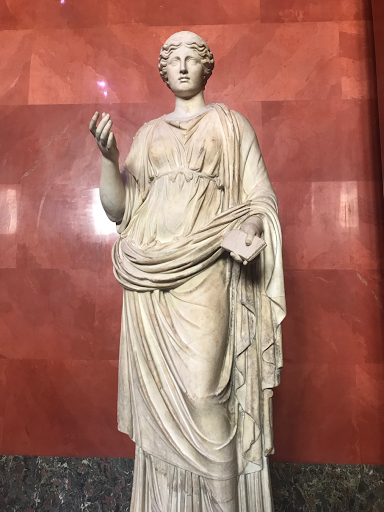 For one thing, there’s barely anybody down there, as the thousands of visitors all gather around the staircases and all over the second floor. By contrast, we had the sculpture wing almost to ourselves. They have a giant statue of Jupiter, several busts of Augustus, and a beautiful series of statues depicting some of the muses like Calliope, Thalia or Clio. Most of the collection dates from the 1st century AD. It never ceases to astound me, looking at the softness of the marble, the tenderness of the faces, the fine detail of the folds and creases on the robes, that these works were made two thousand years ago and have endured since. You can look at a statue’s hand and trace the heartline of a model who lived two millennia ago.
The rooms themselves, while not as outrageously gilded and decorated as those upstairs, serve as a perfect backdrop for this kind of work. Where the second floor is all wooden floors and golden chandeliers, the classical rooms have mosaic floors, in the style of Roman villas, red or green marble walls and Ionic columns. They also have lots of Greek vases but I breezed past them to get to the statues! One of the main rules of travelling is, know what you want to see!
Next we went back up to the second floor to see the Pavilion Hall, a big, fantastically ostentatious room that we’d inexplicably missed on our way around the area yesterday. It is all gold, marble and crystal; I needed a moment just to stand there and drink it all in. The centrepiece of the room is a big clock; it doesn’t really seem to tell the time, but rather it is an enormous golden representation of a peacock, with an owl and a rooster at either side, which would make sounds and unfold its golden tail at the hour. Nowadays it is apparently only activated once a week, but there’s video of it working so you can get an idea. 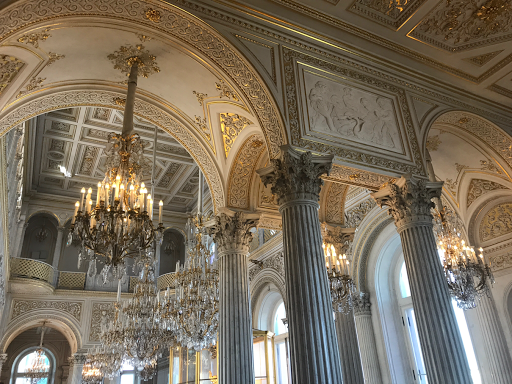 But the big golden peacock is only part of the Pavilion Hall’s allure, as it also has views to the Neva on one side and a small garden on the other, and a big mosaic floor modelled after a historical Roman one. There is a small balcony with rails of intricate golden filigree that surrounds the upper level of the room. Imagine what it must have felt like to be there back in the days of the tsars!
Next I wanted to check the Knight’s Hall, a collection of arms and armour, but was underwhelmed. They have a fine set of rapiers, but other than that they only had a few sets of armour and some muskets not very artfully displayed  in a very unremarkable room. This section can’t hold a candle to the Wallace Collection in London!
Lastly, we looped back onto the Rembrandt room and the big wing on Italian painters. We walked around here yesterday, but since we were wandering around in a daze we’d missed several rooms with famous paintings. 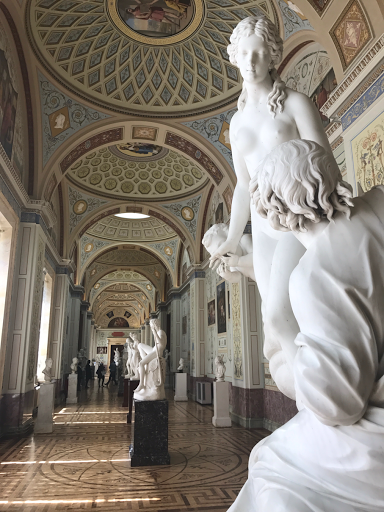 Around noon, we decided that our two-day visit to the Hermitage was complete, and moved on. An unforgettable experience!
Next up we crossed the Palace Square and walked into the General Staff Building, which is where the Hermitage shipped off all of its post-18th/19th century paintings (all of these museums are bursting at the seams, with far larger collections than they can ever hope to display and almost even store), including a large Impressionist collection. We found out that this museum can be visited with your normal Hermitage tickets, so we decided to make the most of it.
I was expecting a smaller Hermitage, but was shocked to discover a fully modern interior: the entire building has been remodeled into sleek, flat marble and concrete surfaces around the existing structure. They have lots of temporary exhibitions (we briefly peeked into an exhibit of Manolo Blahnik shoes), although the main draw are the Impressionists on the 4th floor. 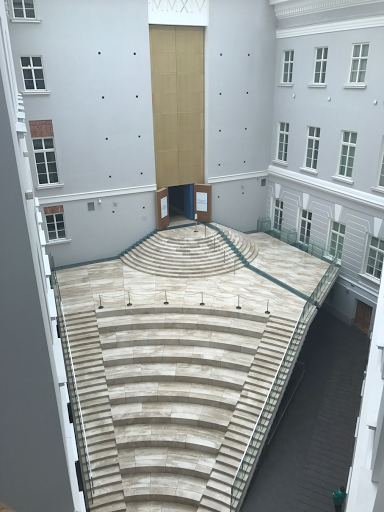 The collection really is large and varied in authors and style, although most notably they have entire rooms just for Picasso and others just for Matisse, including his dancing women or the Red Room. Amazing works, although I have to say that after living in France for years, 19th century French paintings have lost the surprise factor a bit! I was pleasantly surprised to discover a few Kandinsky abstract canvases at the end.
By the time we were done with the big General Staff Building we were starving and exhausted, so we walked a little bit along the canal on the other side to Yat, a restaurant recommended by the guidebook, but as soon as we walked in a waitress went “Sorry, no tables”. We were like, but do we wait, or how long is it until one frees up, but she just went “No free tables” again and almost shooed us out of the premises. So we walked two minutes further down and into Amo Cucinare, a fantastic Italian restaurant where they were happy to see us. If perhaps not local, at least we had amazing food and surprisingly friendly service. (Another big rule for travelling: eat when you can.) 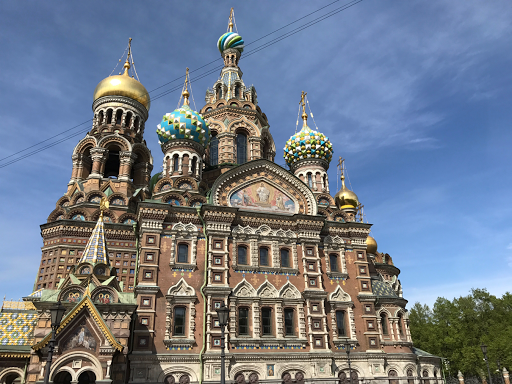 After we’d replenished our energy, we walked over to the grandiose Church of the Savior on the Spilled Blood, one of St Petersburg’s top sights. Its real name is Cathedral of the Resurrection of Christ, but is better known by its bloody nickname because Alexander II was assassinated there. It is a large Orthodox church with an ornate and colourful exterior, but even that doesn’t prepare you for the interior. 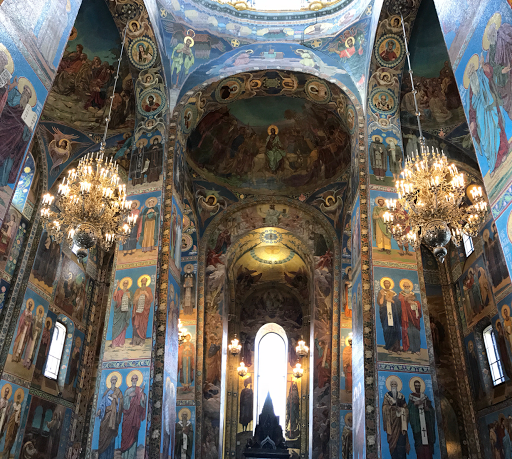 It is all one big open space inside, but what really overwhelms the eye is that every inch of the walls and ceilings is decorated with brightly coloured mosaics. The building was apparently renovated in the 70s, so everything looks brand new and spotlessly clean. The images of Orthodox figures look almost Art Nouveau with their use of black line.
You have to buy a ₽250 (€4) ticket to get in, but it’s very much worth it -it’s hard to come by a space quite like this. It was pretty crowded inside, but however many people are on the ground, when you look up your view of the decorations is unimpeded!
After leaving the church we walked down the canal to Nevsky Propsekt, the main avenue in central Peterburg, and since we were there we quickly waltzed into the Kazan cathedral, which is free, although after the above we aren’t easily impressed. It’s enormous but terribly dark and gloomy inside. 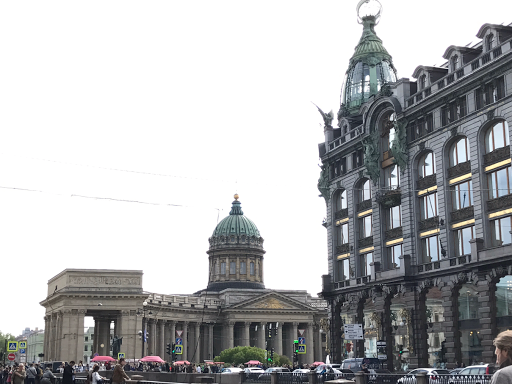 It’s not even late but by now I can barely take another step -so it’s time to rest at the hotel, and then leave to score dinner somewhere when (if?) hunger bites again!