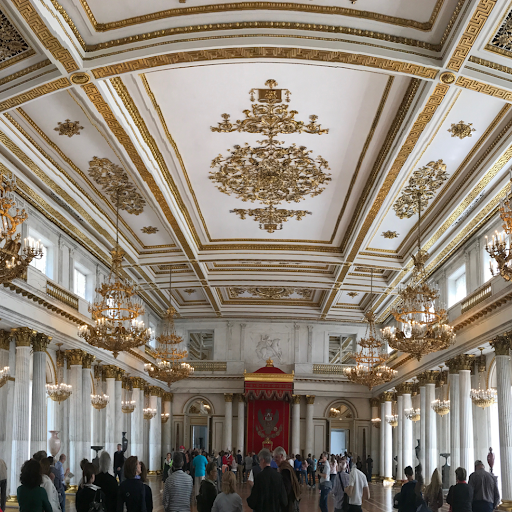 This crisp, sunny morning it was time to go straight to the main course of the trip, the crown jewel of St Petersburg: the Hermitage museum!

Turns out Vasilievsky island isn’t as well connected as I’d hoped, despite being geographically very close to the historic centre, so we ended taking a taxi. The driver was typically circumspect until I paid the fare and said “Thank you” in Russian, at which point he burst out laughing. Always happy to bring hilarity to people, I guess!
The Hermitage, one of the world’s largest museums, occupies what used to be the tsars’ Winter Palace, built on the banks of the Neva river in the 18th century. I’d bought tickets online well beforehand, so I was able to go to the side entrance instead of the main one, which always has long queues. We only had to wait in line for a few minutes, which is just as well because the wind can get pretty cold here!
The Hermitage’s vast collection, which focuses on Western European and Russian art from the 15th through 18th centuries, can compete with that of the Louvre or the British Museum in terms of quality and definitely quantity, although to be honest with you I was more excited about seeing the rooms themselves than the works of art they showcase! 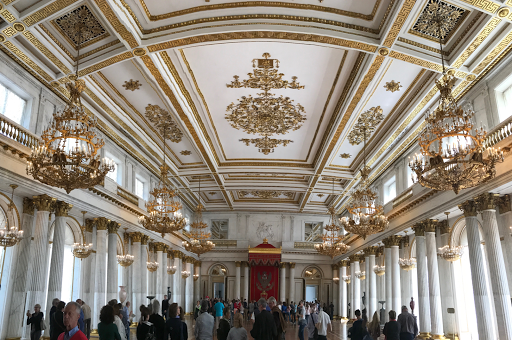 And I wasn’t disappointed. The first floor and the Western European half of the second floor feature beautiful galleries, but the Russian half of the second floor is hosted on the tsar’s old residences, which are nothing short of spectacular. There are reception halls, banquet halls, offices, ballrooms, a wood-panelled library, drawing rooms… all of them very different to each other but all exquisite in their own way. Some rooms were almost entirely covered in gold (and I thought Peterhof was already very golden), whereas others were fully white, and others still painted all over with raphaelite frescoes. There’s a Malachite Hall with green columns and vases, a throne room, a grandiose golden chapel, and everywhere you look the ceilings are decorated with paintings or intricate mouldings. 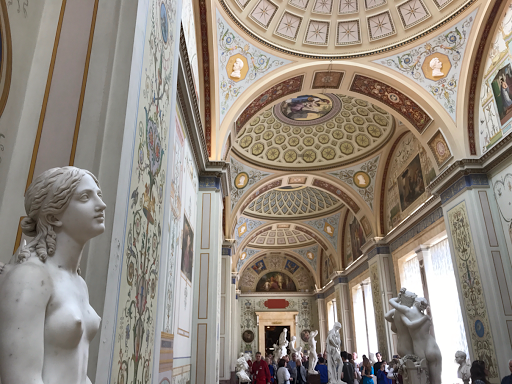 I’m telling you, they could remove all the paintings from the premises and it’d still be worth the price of admission just to see the palace. Wherever I looked there was a new wonder to behold, and it was impossible to keep track -much as I tried- of all the rooms I’d seen and the ones I wanted to visit next. It was quite crowded (it took a lot of creative framing to take pictures without throngs of visitors) but the museum is gigantic, so aside from small rooms or corridors there was often enough room for people to spread out.
Word to the wise: you can buy a two-day ticket that’s only a bit more expensive than the normal one, and it’s very good value. The Hermitage is so enormous that, if you have the time, you should definitely spread your visit over a couple of days. We had already agreed to skip anything that we weren’t interested in to save time, and even then we spent six hours inside and still have several rooms that we want to see tomorrow. There was so much to see that we did that thing that we never do: we… ate at a museum café. I KNOW. I’ve seen my fair share of museums, but I don’t think I’d seen at the same time such rich surroundings for such a prestigious collection. The artistic wealth here beggars belief: there are entire rooms filled only with Rubens and Van Dyck, and there are works by Leonardo da Vinci, Titian, Raphael, Velázquez, Rembrandt, Reynolds, Gainsborough… And for tomorrow we have a collection of suits of armour and an entire section of Graeco-Roman sculpture (There are also exhibitions of prehistoric and mediaeval art, which I don’t care for).
Thanks to my Peterburgian friends, who briefed me extensively on what to do and where to eat, I also got tickets for the Diamond Room! You see, the Hermitage has two private vaults, the Diamond Room and the Gold Room, that are closed to the general public and can only be visited as part of a tour, on a separate ticket, and there’s only one English-language tour a day, so unless you book online and well in advance it’s very difficult to get in. Thanks to my insider tip, I knew to do exactly that! 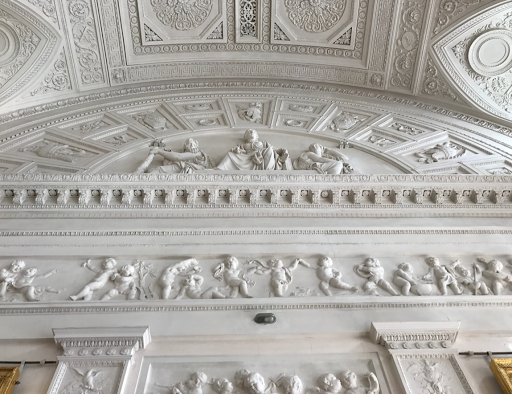 It depends on how interested you are in this sort of stuff, but I like shiny things and enjoyed every minute of the visit. The Diamond Room exhibits the tsars’ private collection of jewellery, which ranges from ancient history (the oldest items are 6,000 years old) to the 19th century. The older half of the gallery has a lot of golden accessories (if they have all this gold here I can only imagine what the Gold Room must be like) whereas the more modern side features precious stones and the titular diamonds. There’s a large collection of jewel-encrusted pocket clocks, ceremonial or decorative swords, snuff boxes, cameos, and of course rings and pendants. We so rarely get to see actual diamonds, but it’s amazing how they shine even under the dim lights of the exhibition space. 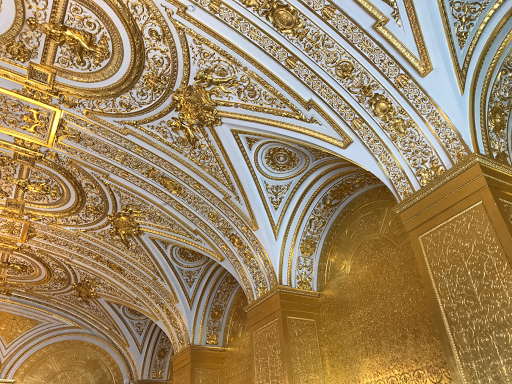 Tragically, again, no photography was permitted inside (unlike elsewhere in the museum) so just picture everyday things and then imagine them jewel-encrusted. That’s close enough. I wish we’d got to roam the collection on our own but the tour was very good too. The minute we walked in a British couple very rudely whined “WE DON’T WANT THIS TOUR WE JUST WANT TO LOOK AROUNNNNND” and proceeded to walk off on their own, which, you paid for this so, you do you? But in fact the guide’s explanations hit the right balance between being thorough and not dwelling too long on any one display.
After all this, it was 16:00 and I for one could not feel my legs anymore, so we headed back to the hotel via the very busy metro to put our feet up. Culture is exhausting!