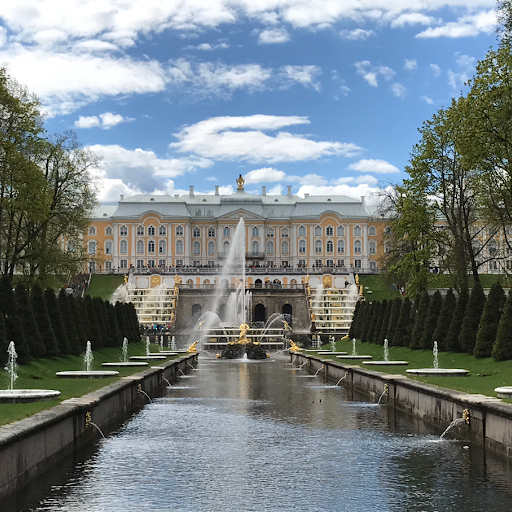 Another year, another adventure! This time, we’re off to Russia! First St Petersburg, then Moscow. Time to put my six months of Russian lessons to the test!

I flew in last night with Finnair, via Helsinki. Vantaa airport has hardwood floors -be still my beating heart- but they also sell reindeer hides, like, hope you didn’t like Rudolph ’cause these guys are gonna nail him to the freakin’ wall. Takes all kinds I guess! The stop made the trip a bit longer but it was very affordable!
So today I left my hotel in Vasilievsky island and walked across the river to the Admiralty, where I took a boat to Peterhof!
All right, so, you’re not supposed to do a day trip on your first day of holidays… But, I was filling in my itinerary during my flight, and I realised that Peterhof closes on Mondays, and on the weekend is when I have my Hermitage tickets, so I kind of had to go today!
Peterhof is about 30 km outside of Peterburg and although there are train and bus connections to go there, the easiest and fastest way is to take a boat from the city centre that will drop you right at the palace gardens in about 40 minutes. It costs about ₽800 (€12) each way.
Peterhof was Peter the Great’s summer palace, named after him, and it was built in the 18th century. All the guidebooks and explanations on the palace immediately name Versailles as a point of reference, and it’s easy to see why: it is also a monarch’s luxurious Baroque/Rococo palace built on a small hill overlooking vast, manicured gardens known for their spectacular fountains. 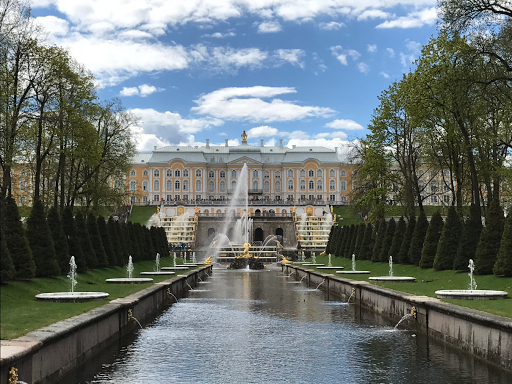 The boat dropped me off at a pier right next to the Lower Park, so pretty much first thing I ran into the canal that leads from one end of the park right to the palace itself and its impressive Samson Fountain. It is a massive complex of fountains, of which the eponymous Samson is only the centrepiece, surrounded by golden statues, smaller jets of water and a cascade over several steps of gilded bas-reliefs.
I just stood there watching for a while as people came and went. It wasn’t terribly crowded (for a Friday in May, anyway) but there were bottlenecks in some corners, so I moved on when I saw an opening. 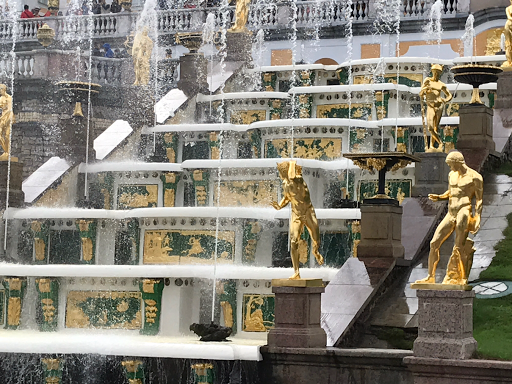 While I was still fresh, I climbed the steps to the Grand Palace, and looked for a way in. One inconvenient thing about Peterhof is that you have to buy a separate ticket for each site you want to visit (the gardens, the palace, any of the smaller museums or pavillions), and at ₽700 (€11) and its own queue each, they add up. I was going to enter into the palace to see if I could buy my tickets there when a guard barked at me -in English, mind you- that “Ticket palace there” and made me go to a door further down, where there was a loooong queue of tourists waiting for their tickets. So I made the entire queue and right at the end a lady informed the Italian group in front of me that the queue was actually for Russian tours only! Single tickets for foreigners could be bought inside the palace so I was right all along so I could have spared myself the entire queue aaaargh HULK SMASH. Anyway. So I left and went back to the entrance and bought a ticket directly inside where there was practically no waiting.
Thankfully, the palace was every bit as impressive as advertised. The first few rooms you see when you walk in are almost entirely gilded, with gold fixtures all over the walls and ceilings. It is a spectacle. But then there was also a room that was completely white, with beautiful stucco decorations and a fully laid 18th century banquet table. Another one had its wall covered by portraits, hung with no space between them. I saw drawing rooms, boudoirs, offices, Chinese-style rooms, and a large ballroom with beautiful frescoes. 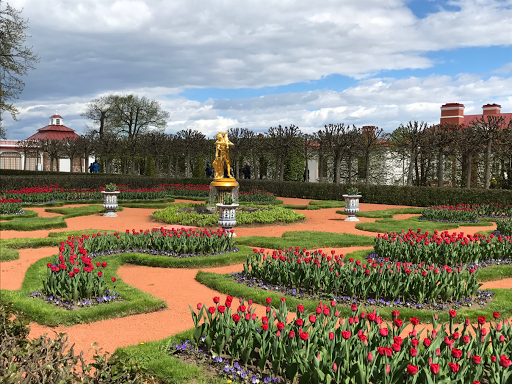 Tragically, photography is not allowed inside the palace, and I didn’t dare sneak any pictures (I didn’t want to get deported on my very first day). Also annoying: there were lots of Russian tour guides giving their tours all over the palace, and all of them -ALL of them- would gather their twenty-people groups around them exactly at the room’s door, effectively blocking the non-grouped foreigners like me from advancing to the next room. At first I thought it was an accident but when I saw that every room had a blockade I resorted to elbowing kids and the elderly to get out of small rooms while their guides droned on and on.
After the visit, I returned to the Lower Park to see more fountains. Some were grandiose, some were more modest, and some were downright bizarre: one was made of artificial pine trees that sprayed water everywhere. The pineapple fountain in Charleston is no longer the kookiest fountain I’ve seen! I walked down to Monplaisir, a smaller building that Peter the Great reportedly favoured, but I was getting tired and scary dark clouds loomed on the horizon, so I made it back to the pier and boarded another boat back to Peterburg. I tried to pick a different company but ended up in the same one. They make the attendants peddle souvenirs during the trip, ugh. All in all, I very much recommend the visit. 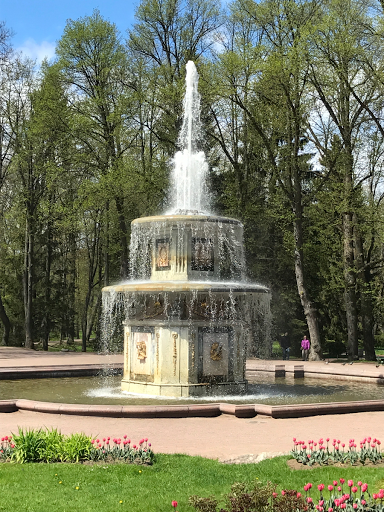 Back in the city, when I saw that it wasn’t raining, I made a quick detour to climb to the top of St Isaac’s cathedral. At ₽150 (€2), it’s an inexpensive way of seeing St Petersburg from above, although just barely -its 262 steps sound like a lot but are fewer than London’s monument, as they only go up to the base of the Orthodox cathedral’s golden dome. 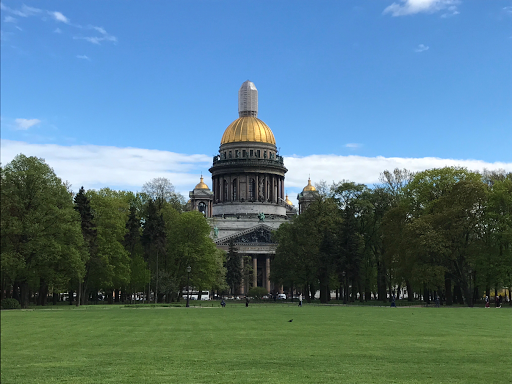 By now the skies had gone decidedly darker and it was windier, so I called it a day and came back to the hotel to rest my feet (day 1) before going out for dinner somewhere nearby. It’s been raining on and off since then so I made it just in time!
Okay, so I was just rereading this entry and realised that I used the sunniest, bluest sky ever to illustrate the bad weather that made me go back, you’re gonna think I was making it up. But this is what it looked like in the opposite direction, see: 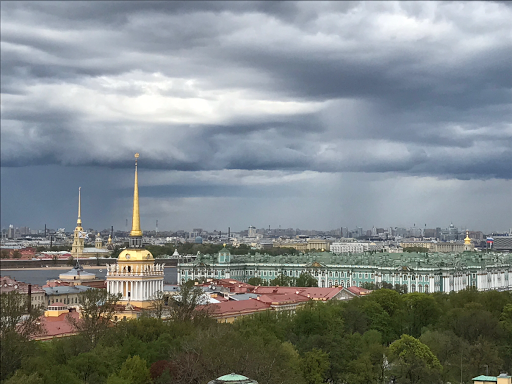