My last sunny, warm, beautiful day in Lisbon started with a dose of high culture: I took the metro to the Calouste Gulbenkian Foundation, an art museum formed around an oil tycoon’s private art collection. It occupies two buildings surrounded by gardens, and a single €10 ticket gives you access to both. 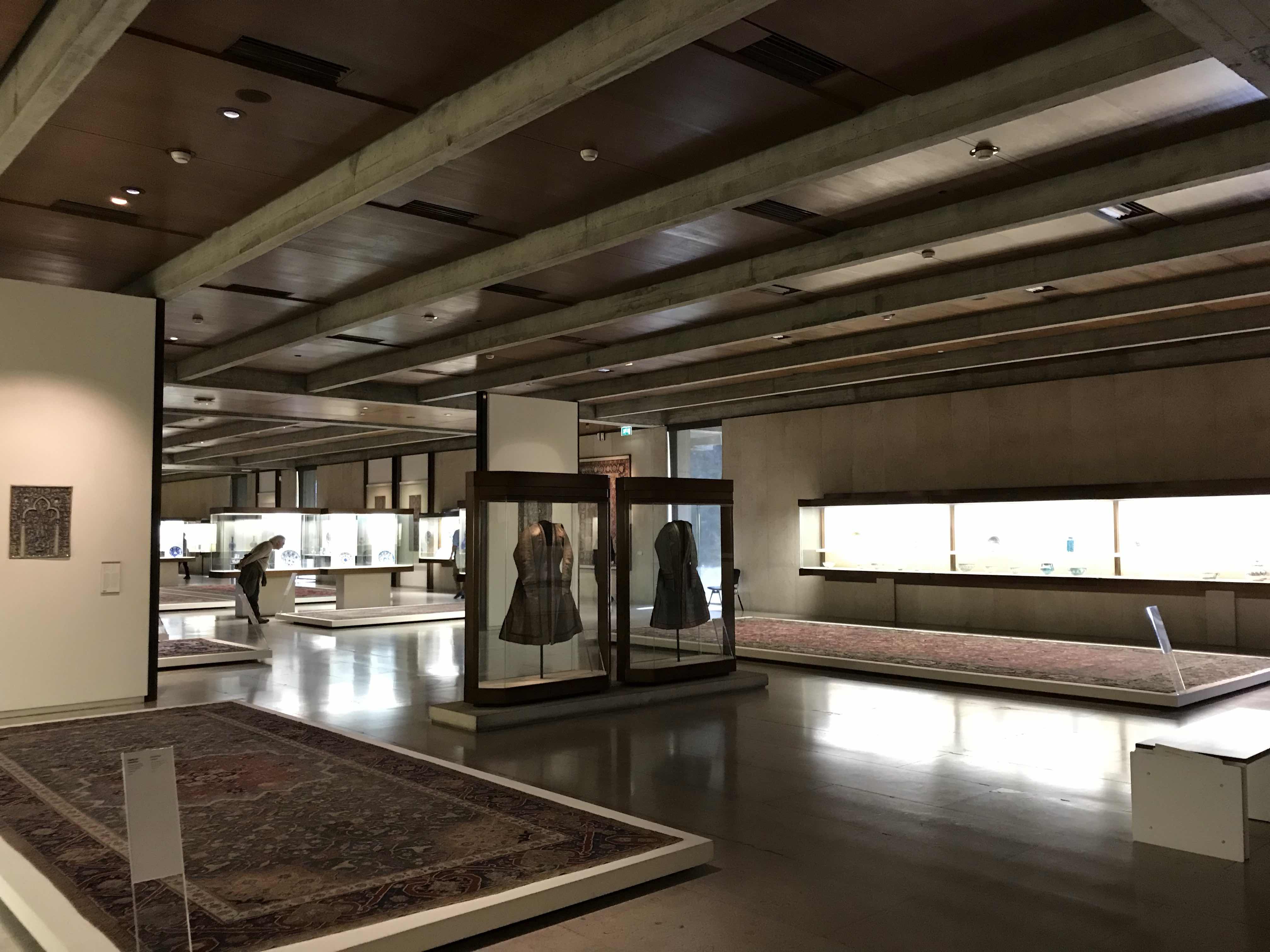 The first building, called “The Founder’s Collection”, contains ancient art, with a few extremely old Egyptian trinkets and sculptures (I was impressed to see a cup seemingly made from alabaster that was noted as dating from 2700 BC), Chinese pottery, Turkish tiles and carpets, and various European pieces of furniture and clothing. The diaphanous showing rooms, with all their straight lines and spotless wooden floors, made me feel like I had walked into the film Columbus. Aside from this wing, there’s another one for paintings, which didn’t interest me as much except at the very end, when I found a beautiful Singer-Sargent right next to a gorgeous Renoir. They also have a few British and Venetian painters represented. 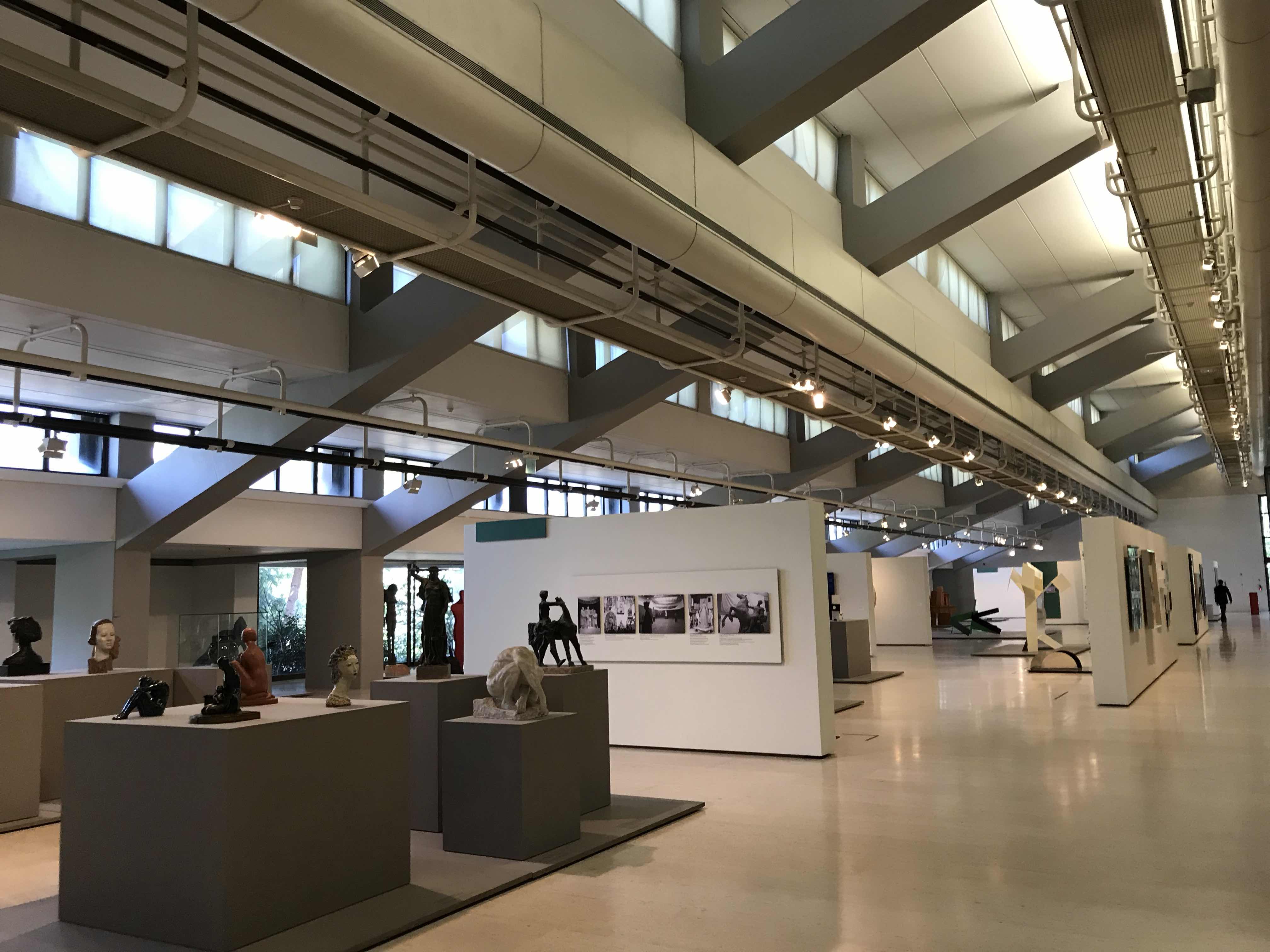 The second building is the Modern Collection, focused on modern and contemporary sculptures as well as some paintings. This exhibition is laid out in one big open space with three levels. This makes it a fairly quick visit, and so after a walk around I found myself outside in the Lisbon sun. I got back in the metro and went downtown, then started climbing up the hills again -but this time, the Western hills, towards the Bairro Alto.
Even though walking up a million stairs, then up a steep slope, then more stairs is exhausting, and there are cable cars that can take you up and accept the same oyster card as the buses and metro… I still recommend walking, if you can, because the streets are so charming. The houses are colorful, the cobblestones are picturesque, and every once in a while I turned around to find stunning views over the city below or a picture-perfect sight down a narrow alleyway. 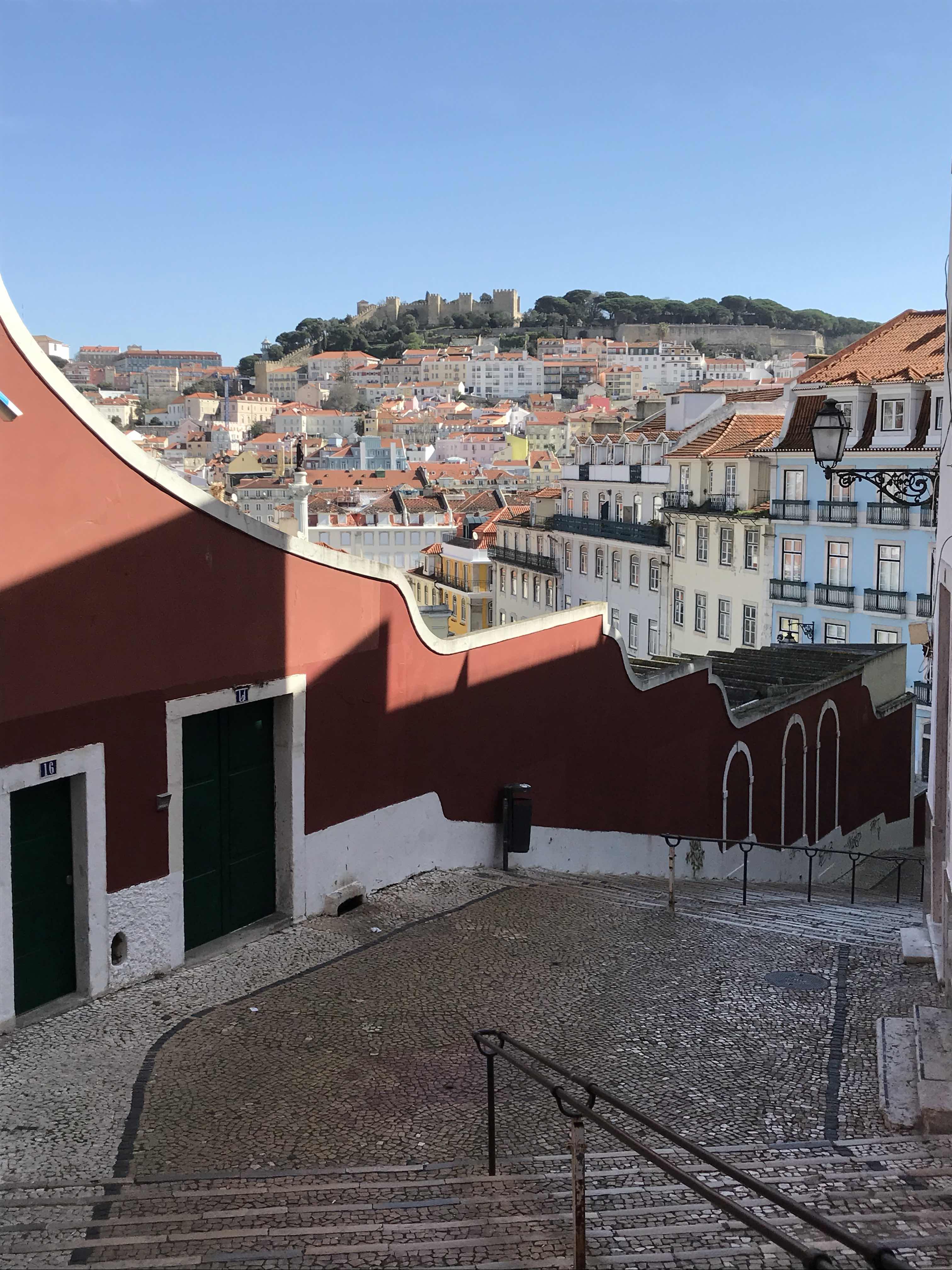 I eventually made my way to the top of the São Roque hill, to the Miradouro de são Pedro de Alcantara, a terrace with an incredible view of pretty much all of Lisbon below. Unfortunately, most of the edge of the balcony was fenced up for construction, which diminished the impact considerably, but I could still enjoy the sights from a few steps back. The day was clear, so the entire city greeted me with its red rooftops. Right across, the Castelo de são Jorge was visible on top of its own hill. 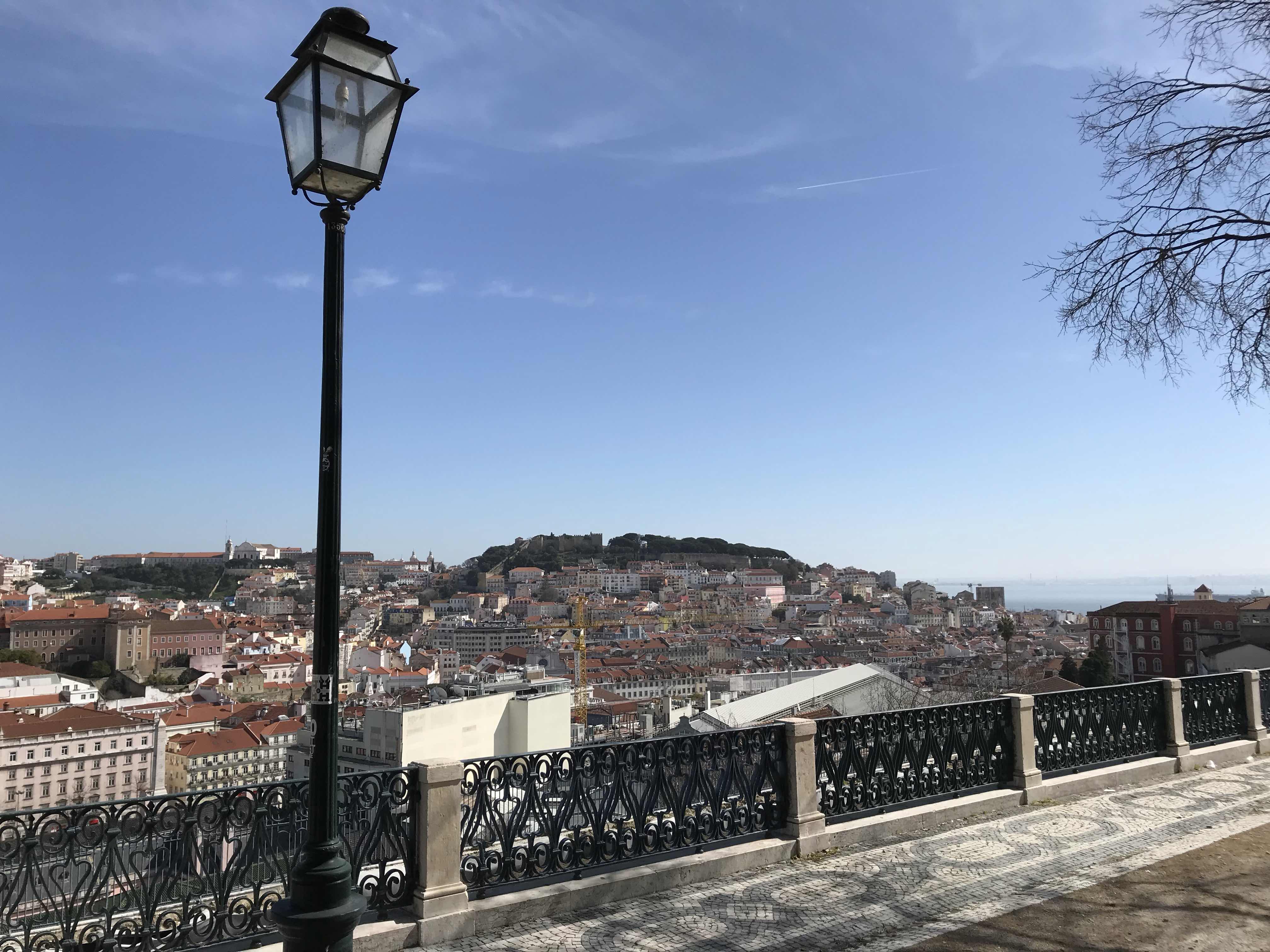 I continued my walk downhill (there’s a church of são Roque on the way, but it was closed for Sunday mass so I don’t know if the inside is worth a visit; the outside was unremarkable), watching the trams go by. Some of the streets here looked very pub-crawl oriented, with lots of tiny bars and restaurants, but they were all closed. I kept walking until I got to the miradouro de Santa Catarina, yet another Lisbon terrace. The views from this one are… honestly pretty ugly, you can see the river but the view is ruined by a lot of industrial-looking buildings and blocks. Still, the terrace itself was a nice place to sit down and rest, with trees that cast shade over the benches.
After resting for a blissful moment, I resumed my walk down the hill. One advantage of these hilly cities is that, once you know if your destination is above or below you, you can just follow gravity without much need to look at the map. My destination here was at water level: the Mercado da Ribeira. There’s a market here some days, but I wanted to check out a massive hangar they have here that serves as an enormous, fantastic food court. Lots of Lisbon restaurants have outposts here that serve proper, real food, some pricier than others but mostly very affordable. I took a walk around the perimeter and finally settled on a place where I ordered a pistachio and herb-encrusted codfish with tomatoes and baked potatoes. It’s not the usual food court fare! 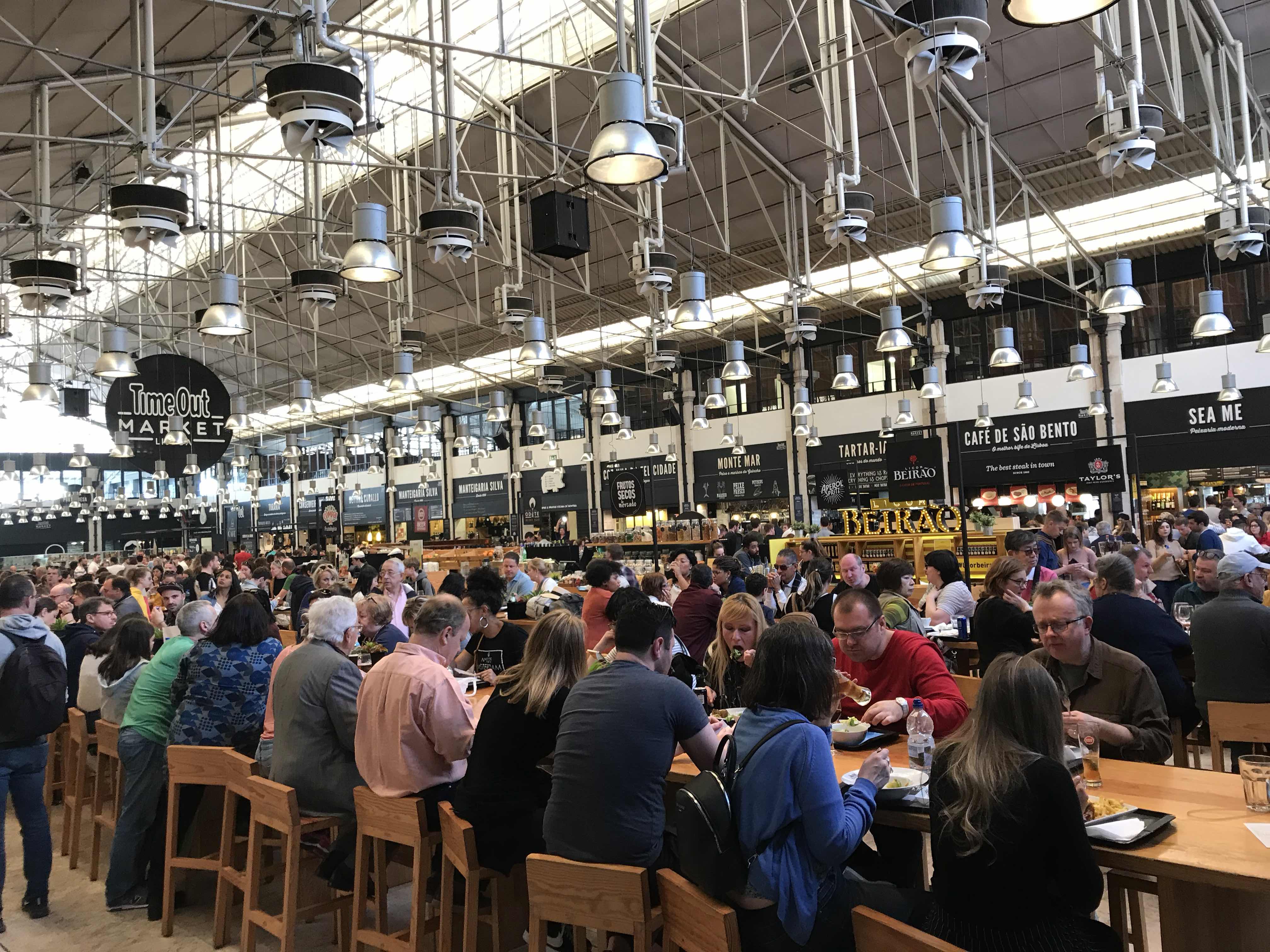 The place was super crowded, so even though it’s gigantic it was still a struggle to find one free spot at a table. I had my fish -it was very good- and then got up for dessert. I had considered just going back to the hotel and having tea in my room, but then I saw the cakes at this one stand and I folded faster than a cheap suit! I had a superb cheesecake that almost knocked me out it was so good. 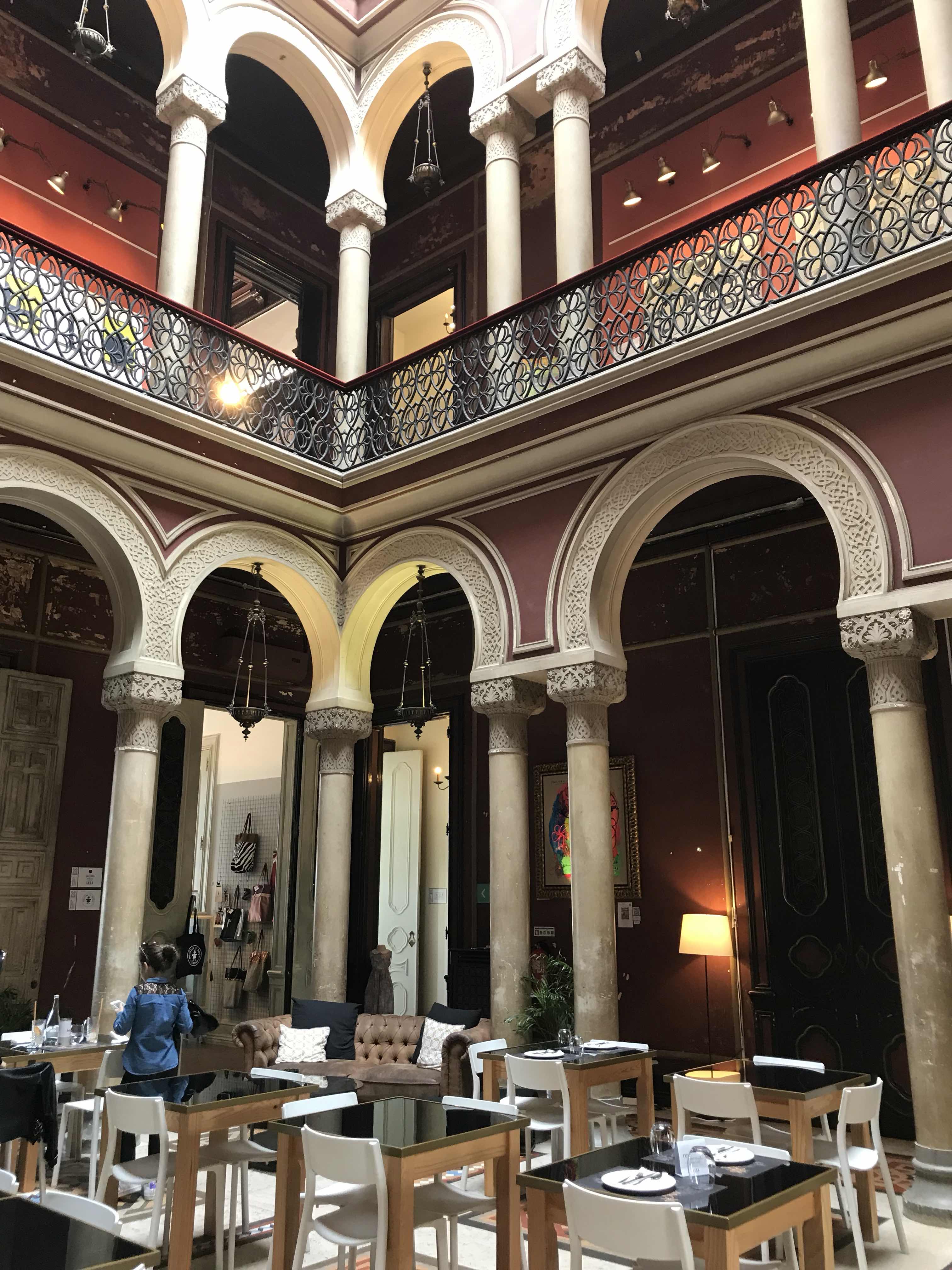 For the afternoon, I checked out Principe Real, a very trendy neighborhood near the water cistern where I went to see fado. I went into Embaixada, an old European-style mansion now repurposed into a restaurant with a bunch of hipster shops. It reminded me a lot of The Shops at Downtown in Mexico City: the same concept of a restaurant in the inner court of a multi storey building, even in similar styles. There is a Botanical Garden next to it, but they charge for entry and I was tired, so I was happy to walk past and keep strolling slowly towards my hotel, peeking into a few cute stores along the way and prospecting possible dinner spots for later. 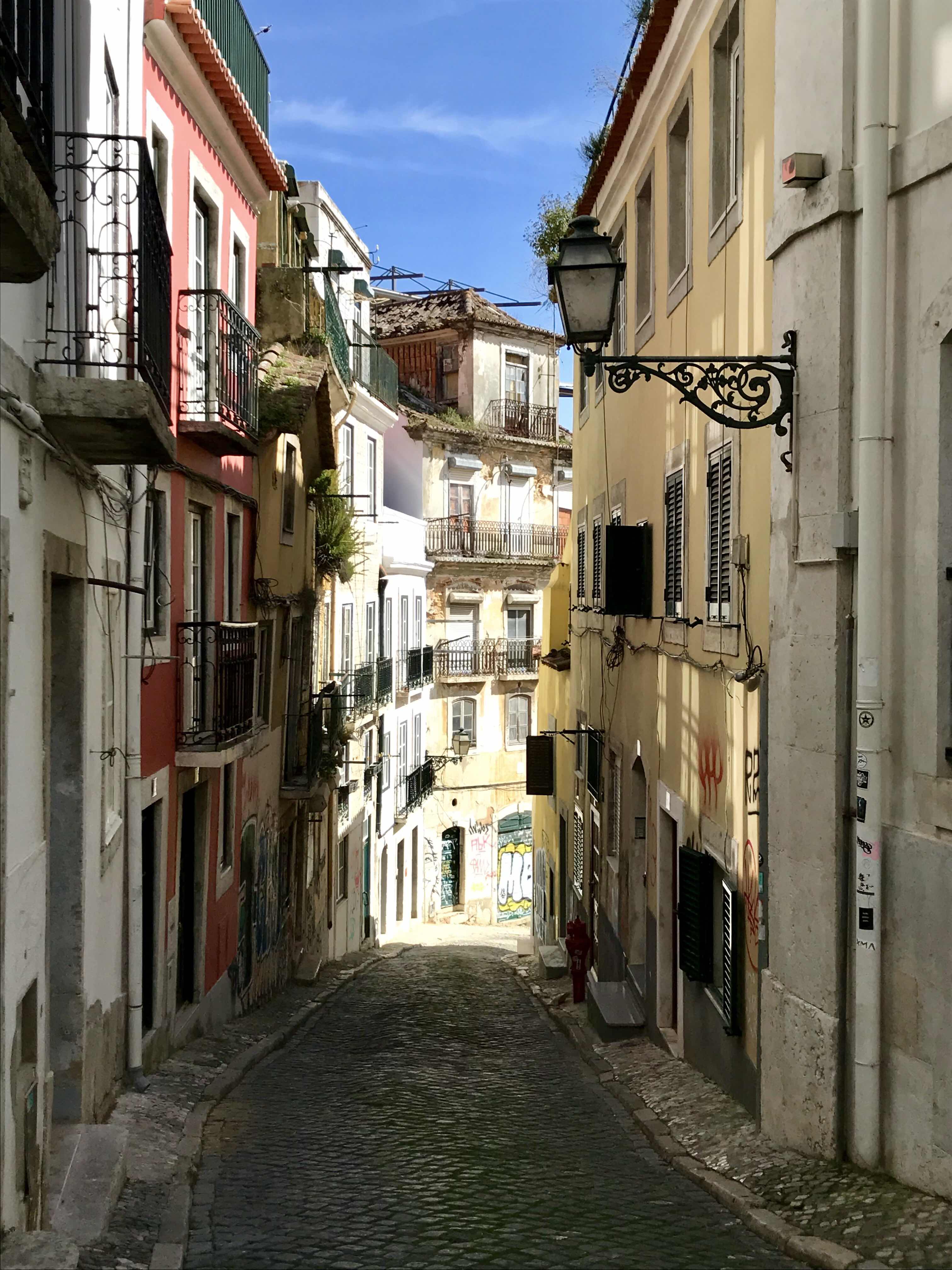 That’s it for my short but productive stay in Lisbon! I couldn’t have asked for a better first impression: the city is gorgeous, the weather was great, I had great food, I got to enjoy culture but also just get the feel of the different neighborhoods… With its narrow, winding streets and its hidden viewpoints, it’s a city that rewards exploration and carefree strolls, but also offers plenty to see and do. I haven’t left and already I wouldn’t mind coming back!