So our plan to spend this beautiful, sunny day in Kamakura went out the window when the airline failed to deliver our luggage yesterday, after we spent all afternoon stuck in the apartment. After two excruciating phone calls with customer service, in Japanese as well as English, we discovered that the deliverymen had actually visited… An hour before the 16:00-20:00 window we had been given, while we were out. So today we managed to get them to commit to come by at 14:00 on the dot (they came at 12:00; good thing that we had wised up and mom stayed in the apartment).

After my experience with Japanese customer service, I made a quick foray into Akihabara, to browse in a couple of manga/anime/game/geeky stuff stores. It was even more colourful, loud and maddening than I remembered it. I love the place! In some stores even each individual bookcase had its own unique soundtrack, contributing to a sensory overload that builds up over time and only becomes evident when you walk away and notice the silence. 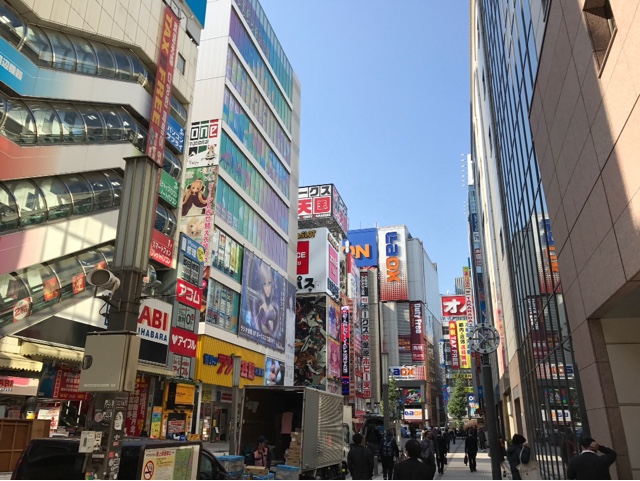 It’s funny, but people here react with something akin to cautious deference when crossing foreigners in places where it’s unusual to find Westerners (such as Japanese-only manga stores). People would let me have the stairs even if we both fit, or they would give me wide berth in a corridor as if I might trample them otherwise. Everyone’s very respectful but I don’t want them to be scared of me!
After we had received the missing bag, we headed out to Ginza, where we had a long shopping list of places that we wanted to visit.
First was Loft, because it’s right across from Yurakucho, the JR station closest to central Ginza. Loft is a delightful megastore that sells all kinds of crazy and practical stuff, from bag hangers for doors to arm pillows to vanity phone accessories to souvenirs to travel items to anything else you can dream of. Even after having done a full tour of the place we kept finding racks we hadn’t noticed. If you come to Tokyo, visit a Loft. Just as an example, I bought an ultra-light foldable umbrella that only weighs 90g; I’m almost afraid to open it!
We also visited Muji HQ, since it’s in the same hangar as Loft. It felt bigger than I remembered; did it already have a food section and a restaurant when I was last here in 2013? It looks more than ever like the Japanese Ikea. 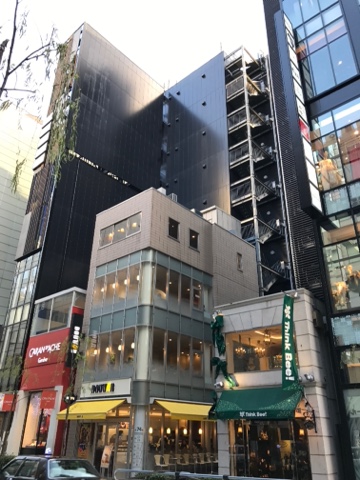 After a late lunch there, we made our way to Kabuki-za, the main kabuki venue in Tokyo and an elegant traditional Japanese building amid high-rises. Because full kabuki programmes can be comprised of up to five different acts and last up to four or five hours, most visitors opt to buy single-act tickets, which can be bought on the day for a reduced price. I had intended to inquire about tickets for the second act, because I assumed we were late for the first one (it was around 15:50 and the show started at 16:30), but in fact we were ushered straight in, shuttled to the fourth floor, made to buy tickets right there (1200 yen or €10,3 for a 90-min act) and then asked to wait in the hall. Well don’t mind if I do!
Unfortunately, the act we got to see was a play instead of an opera, so it was less spectacular without the music and the singing, but it was interesting nonetheless. It was about the Asano clan during the time of the 47 ronin. For 500 yen (€4.3) we rented a brick-sized, brick-weighted screen that subtitled the dialogues and the action. If you go see kabuki, do not pass on the opportunity to rent one of these; it makes all the difference in the world. The audience was about 95% Japanese, with only a few tourists at the back of the theatre where the single-act seats are. It pained me that we couldn’t see the rest of the audience from our seats, because it’s fun to spot the different kimonos in the crowd. 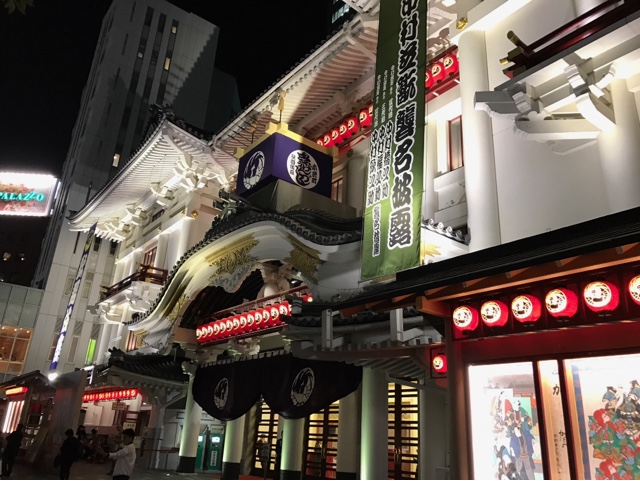 When we came out at 18:00 it was already fully dark outside. We made a bee-line to the next item on my to-do list: Kyukyodo, the amazing stationery store right in one of the corners of the main Ginza crossing, right next to the Ginza subway station. It’s really not that big, with one small floor devoted to stationery and a second one with incense and calligraphy materials, but we spent three quarters of an hour browsing the different postcards, wrapping papers, origami papers, washi (Japanese rice paper)… One thing we didn’t find easily were note blocks, like to have next to the phone or the computer to take notes, so I asked an attendant in Japanese if they had notes.
“Oh, of course,” she said, went over to her desk, tore one paper from her own notes and handed it to me.
Me: “Uuuuh…”
“Ah!”, she said, and then handed me a pen.
Me: “Um,”
“Oooh, you mean as in do we sell any,” she concluded, and then gave a big belly laugh and pointed me in the right direction. Never hesitate to ask for help in Japanese stores! You’ll always be rewarded for your efforts! 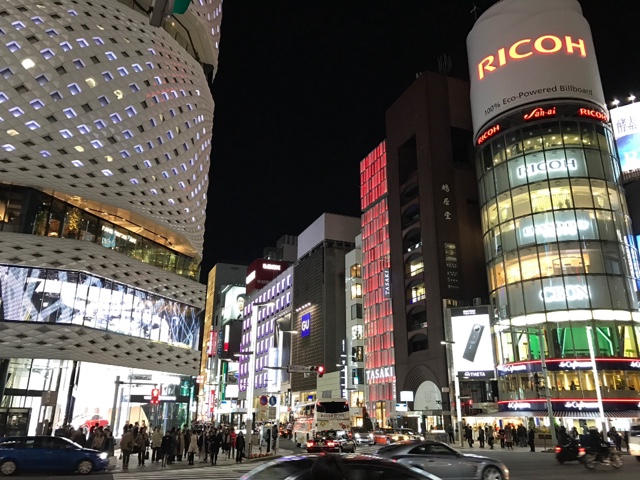 After Kyukyodo we headed over to Mitsukoshi, following a highly valuable recommendation. It’s one of the venerable department stores in Ginza, right across the street from Kyukyodo, and although I don’t care for department stores I really wanted to see the second basement, wholly dedicated to food. It is SO WORTH IT GUYS. It’s a full culinary experience, with counter after counter displaying and selling everything that’s fit to be eaten (and a few things that I wouldn’t put in my mouth). 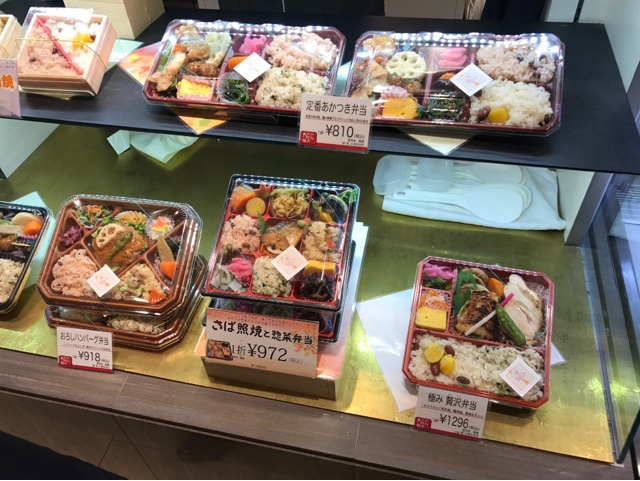 There’s a bakery, chocolate, French pastries, mochi, dorayaki… Tea, coffee, wine, whiskey… Sushi, cooked Japanese food… Every stall seemed to belong to a different company, with its own staff wearing different uniforms, everyone extremely polite of course. Some offered samples, to which we helped ourselves! We bought our dinner here; although a lot of things were as expensive as they looked, many were surprisingly affordable, and near closing hours some fresh items were discounted, so unlike Harrod’s or Fauchon you may walk out of this one with a bag.
By this hour we were starting to feel the cold, and ceasing to feel our legs, so we made our way back to the train station. We did briefly peek at Uniqlo HQ, just to look at the massive 12-storey building, and then said goodbye to the lights and the bustle of Ginza.