Save for a couple of jetlagged awakenings, I had a good night’s sleep and woke up to blue skies, the shining sun, and a glorious 17°C. Back to the suitcase with the winter clothes!

Today’s plan was to do a tour of Tokyo’s fashion hub around Harajuku. We had a very early start because I wanted to beat the crowds, which we did, to a fault: we arrived just as they were beginning to open the stores (most open between 10:00 and 11:00). We had to loiter a bit because there has to be some madness in Harajuku for the full experience! 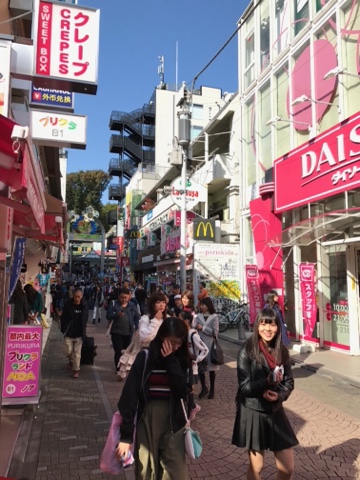 We took the JR line to Harajuku station and began our walk with Takeshita-dori, the crazy loli/goth street where every other store sells platform shoes, ruffled skirts, or crepes. It was as deliciously mad as I remembered it, with many stores playing sickeningly sweet jingles outside. Some of the passersby looked even more garish than the mannequins. Even the food offerings here are sugary and cute, with every corner housing a Japanese creperie. Crepes here are rolled into cones and can contain unexpected amounts of whipped cream and full-sized actual pieces of cake inside. If any arteries remain unclogged, a store also sold rainbow-coloured cotton candy.

After walking the length of Takeshita, we took a right on Cat Street, a decidedly more sober and bohemian street with lots of indie clothing stores and outlets. Prices ranged from the affordable to the outrageous, and the style was also very Japanese in its own way: all the clothes here have solid colours, no prints and very few patterns, very straight cuts, tasteful but discrete. The street is very nice to walk down, as there are much fewer people and no cars, and it’s dotted with small, trendy cafés and eateries.
We had lunch at one such place, Brooklyn Pancake House, which turned out to have amazing burgers. We were flanked on both sides by two pairs of Japanese women who wolfed down large piles of pancakes with bacon and eggs while giggling like schoolgirls.
Clearly the place has a reputation because as soon as we sat down a queue formed at the entrance of the minuscule restaurant; all the Japanese people waiting to get in must have felt robbed when they saw two Westerners enjoying their lunch! I managed to order everything in Japanese, aided by a waiter who could not or would not speak a word of English. Although I’ve forgotten so much grammar over the years, some words and expressions come back to me when I need them (many others do not!).
We meandered a bit along the web of streets near Cat Street, as they were filled with interesting shops and cute cafés. As with so many other places in Japan, here it pays off to allow oneself to get lost for a while.

The last leg of the Harajuku trio was Omotesando, Tokyo’s Fifth Avenue. This one looks more like a European street, with wide pavements and big, leafy trees lining both sides of the road. By now it was completely packed with people, although everyone’s so respectful that it didn’t feel too oppressive. I was thrilled to discover that many trees had started turning red, from the top down; this raises my hopes of seeing beautiful autumn colours in the gardens, castles and temples that we plan to visit over the next fortnight.
All the clothing stores in Omotesando belong to prohibitively expensive multinational brands, which I don’t care for, but I like the architecture of the avenue. Instead of having large blocks, there are many narrow buildings of totally different styles. There are avant-garde glass houses, classy cubes of dark stone, faux-British colonial mansions, red brick façades, modern swirly concrete towers… All within a five-minute walk.
Aside from the boring Pradas and Diors, there are two places worth your time: one is the MoMA store, as in the New York Museum of Modern Art, sitting on the third floor of a small and square building. It’s full of ingenious, whimsy, stylish and funny stuff. The other place is the Oriental Bazaar, the only traditional Asian-style building in the area, which sells all kinds of souvenirs imaginable across three different floors. For stationery, paper and other arts and crafts you would do better going to Kyukyodo in Ginza or one of many renowned stores in Kyoto’s Teramachi, but they have so many things here that it’s interesting to see. In Japan, even the touristy souvenirs are tasteful. Use this to decide what kind of things you want to buy later in your trip. They also have a pretty affordable selection of yukatas, if you are so inclined.

That was pretty much our full itinerary, so we made it back to the apartment to await the delivery of the lost luggage. An annoyance, but nonetheless we welcomed the rest! We have to save our strength if we want to go temple-hopping tomorrow in Kamakura!