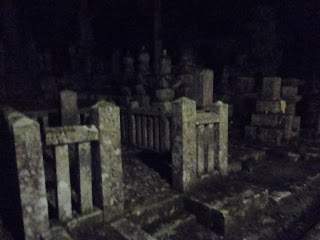 Last night I took Ekoin’s night-time tour of Okunoin, Koya-san’s famous cemetery and Unesco World Heritage Site. It was a good idea to leave my own visit to the cemetery until after taking the tour, as I later had a better idea of the history of the place as I walked on my own.

It was freezing, of course, but I had thrown on everything I had, so it wasn’t so bad. Learning about the history of the place, and about Kobo Daishi, one of the founding fathers of Japanese Buddhism (and also a master calligrapher and poet, we were told), who is believed to still be meditating in his cave, since he locked himself in it in the 9th century. The monks still carry breakfast and lunch to his cave every day. Our guide combined explanations of Okunoin’s and Koyasan’s history along with a brief summary of the tenets of esoteric Buddhism, which really helped to put some of the sights in context.

It was a moonless night, it was pitch black, and in the dimly lit path I suddenly understood where all the Japanese ghost-horror stories come from. During the day it is a supremely peaceful place, with all the gravestones coexisting with the trees, but at night the whole forest blends into the background, so that you only see the first few graves on either side of the path. When we crossed a hunched, old monk slowly walking in the darkness, he almost looked like an apparition. It was 19:30, by the way, but it was dark and cold enough to feel like three in the morning.

When I came back this morning, it didn’t even look like the same place. The early morning sun shone through the canopy, everything was green, and the tombstones blended seamlessly with the forest -considering that the oldest one is 1,200 years old, it’s easy to see why. It was early enough that I was almost the only one there, so it was very quiet, very peaceful. It really is a place that encourages contemplation.

The old part of the cemetery has tombstones covered in moss, and in some places completely skewed as a nearby cedar tree has grown so huge that its roots have displaced everything around the tree’s trunk. The new part of the cemetery, though, has monuments shaped like coffee cups or a big space rocket, as well as special places for multinational corporations -it is strange to see, certainly, but after all, it is a cemetery that is still in use, and one that doesn’t require the deceased to have belonged to any particular sect of Buddhism, or even to Buddhism in the first place.

It was freezing cold, though: literally, the basins with water had frozen solid. I’m not exaggerating, look:

Even though I had heated the room before going to bed and put on the extra-thick duvet and a blanket, I woke up from the cold in the middle of the night to see that the inactive heater marked my room temperature at 8ºC. I’m sure it was warmer than it was, say, in the middle of the forest, or in the North Pole, but when I go to sleep I really rather prefer to know that I’m gonna wake up. I shivered under the covers for a few minutes because I didn’t dare cross the room to get to the heater, built up my courage, and then crouched in front of the heater until I regained some warmth. I went back to sleep and, thankfully, by the time the room froze over again it was already time to get up.

I joined the rest of the guests at Ekoin in attending the morning ceremonies, in which they read sutras and lit a ceremonial fire. It was so incredibly cold that you could see your breath just walking down the hallway, so I’m sure I wasn’t the only one with half a mind to interrupt the fire ritual just to warm my hands.

After the ceremonies, I went on the Okunoin walk described above, and headed back to metropolitan Japan!