Sigh. So, another day to explore priceless architectural and historical wonders of the world, another day that’s rainy, cold, and foggy. Google Weather and my iPhone said that it would stop raining at 10:00, but it was a filthy lie. It never stopped raining. It hasn’t stopped yet.

After chaining boats, buses, and trains, I slept like a baby and treated myself to a fantastic breakfast at the hotel. I ate as much delicious food as I could and left at ten. They didn’t have room for me in the hotel shuttle to central Hue so they sent me in a taxi at their expense. Works for me!

The main attraction of Hue is the Imperial Citadel, a vast complex built by the Nguyen (pronounced “gwin”) emperors much more recently than I expected, at the turn of the 19th century, when they united the north and the south of Vietnam. Looking at the state of the buildings and, well, the fact that it’s an imperial citadel, I thought we’d be talking about the 17th century. Their reign coincided with the increasing French occupation, until the last Nguyen emperor abdicated in favour of Ho Chi Minh.
At 150,000 VND a ticket, it’s the priciest visit I’ve done so far in Vietnam, but it’s still just €6,30. This model of the citadel should give you an idea of how big it is: 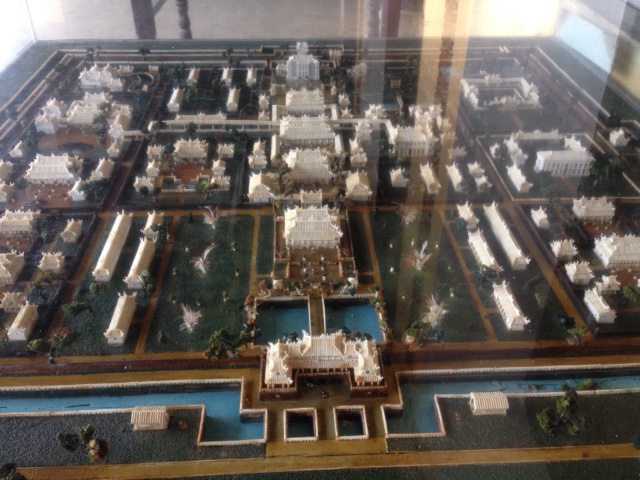 Sadly, a considerable part of the citadel was destroyed by the French at the end of the century, and then by the North Vietnamese and the South Vietnamese and the Americans during the Vietnam War (apparently it changed hands halfway through the war so everybody got to attack it) so many of the buildings depicted up there do not exist anymore. Still, though, it’s a big place.

Aside from the vastly different architectural differences, I thought the citadel had a very similar structure to the Palace of Topkapi in Istanbul. Both were seats of political, religious and military power, and both housed a smaller citadel within the citadel as a home to the wives, children, concubines and eunuchs of the emperor. In Topkapi the inner residence was the Harem, here it’s the Forbidden Purple City. 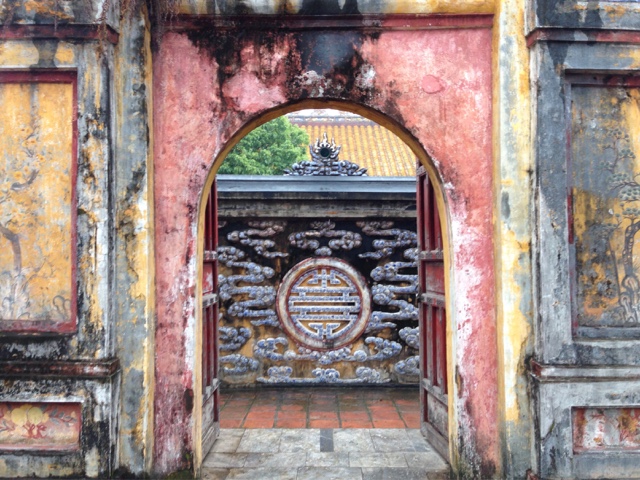 The whole complex is very green, with trees and ponds everywhere, the buildings made either of red lacquered wood or yellow-painted stone. From the remaining structures, some are temples, some are restored to resemble how they looked back in the 1830s, and some house exhibits explaining the history of the place. The exhibits are all translated into English and French (lots of French tourists here, as many as Americans) but outside of them there are precious few signs, indicators or maps, so I spent as much time lost and backtracking between wings as doing actual sightseeing. 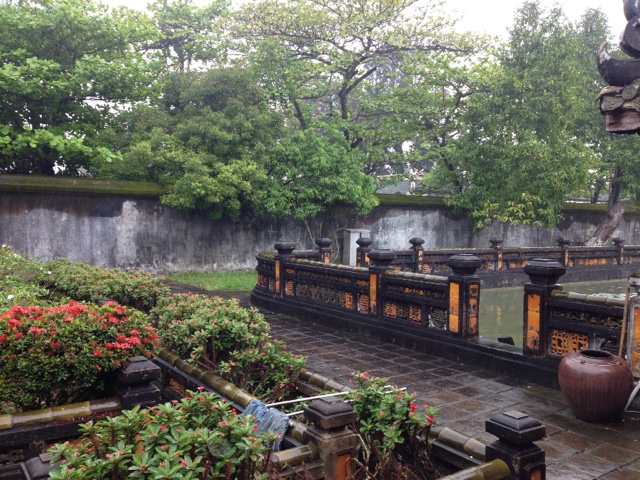 I really liked visiting the citadel, but I can only imagine how nicer the visit would have been if I wasn’t wet and slipping on the ceramic tiles and holding an umbrella all the time. On the upside, there was barely anybody there (understandable, because it was raining). I dragged my feet the entire time, taking as long as I could, reading all the exhibits, hoping it would stop raining at some point, but it never did. Outside of one of the buildings I ran into the two cutest puppies you’ve ever seen in real life, one, black, one brown, yapping at the door! But they were really shy and they hid whenever I tried to take a picture of them…

Eventually, I ran out of things to see, and it kept raining, so I left the citadel and went for lunch at Les Jardins de la Carambole, a French restaurant right outside the corner of the citadel (though, annoyingly, on the opposite end of the exit gate). I know, I know, I live in France, I didn’t come to Vietnam to eat French food, but this place is supposed to be an institution here, in a colonial building that takes you back to how Indochina might have been back then. Not for nothing, but the spring rolls I had were the best, crispiest, least oily I’ve had so far in Vietnam. For a main course I had boeuf bourguignon, which was delicious and so tender, and for dessert a mango tart that I actually didn’t like very much. But very good experience overall, and the bill for three courses and a drink came in just south of 400,000 VND (€16,80).
After lunch, I rounded back to the Antiquities Museum, which is right outside the exit of the citadel but included in the ticket. The museum is actually one big, wooden, open pavilion that requires you to remove your shoes to enter. I was very briefly annoyed but then realised that my feet were killing me after walking nonstop for five hours and welcomed the change of step! It’s a quick visit, just several glass cases exhibiting porcelain, garments or furniture, and can probably be done right after the citadel if you don’t take as long as I did!

I’d seen just about everything I’d set out to see and then some, and it was still raining -still is, as I just came back from dinner- so I hailed a cab (Mai Linh, the green cabs, as they’re the most reliable ones to run the meter instead of just asking for whatever price they like) and retreated back to the hotel. Tomorrow’s plan: see the tombs of the emperors!