Today I woke up half an hour later than yesterday! I’m gonna get over this jetlag just in time to get jetlag when I come back!

While doing research for the day’s itinerary in the morning, I found out that ALL the museums in the French Quarter are closed on Mondays: the New Orleans Historic Collection, the Old US Mint, the 1850 House… So I had to shift the day’s focus out of the old town and into the Western side of town.
Our first goal was to get to Lee Circle, a roundabout that has three museums right next to it: the Contemporary Arts Centre, the Ogden Museum of Southern Art and the WWII Museum. To get there from Treme we had to take a bus at Northern Rampart, so our day began by waiting at a bus stop on a crossroads while construction work was being done on the road, with forklifts and tractors and trash trucks drove left and right in front of us. The roads here are in a dreadful state, and that’s true for the most central and touristy areas of the French Quarter as well as for Treme, where there are potholes at every turn waiting to snap a wheel right off your car!
Once the bus did arrive, we got day passes for all bus and tram travel. They cost $3, you can buy them from the bus driver directly, and they save you money if you make at least 3 trips on the day. Then we sat down and watched as the small, colourful houses of Treme slowly gave way to bigger and less distinct buildings. By the time we got to Lee Circle, the landscape could have been anywhere in the US.

We began with the Contemporary Arts Centre, which occupies a beautifully restored building. Unfortunately, that’s just about all that you can say for the site, because after forking over $10 each we found out that the “galleries” really just boil down to one floor with a couple of uninspired video installations. Give this one a pass! The one good thing that came out of this is that the guy at the café made us a list of movie theatres in town that we later used!
After this disappointing visit, we crossed the street and walked into the Ogden Museum of Southern Art, a bigger, 5-floor building with actual galleries. This one was the real deal: it featured portraits, abstract art, photography, landscapes… All by Southern artists. Even though the subject matter of the artworks wasn’t necessarily about the South, it really gives you an idea of the history of this part of the country, and especially of how different it is culturally from the rest of the United States. The museum’s store is also pretty cool, featuring handcrafts made right here in Louisiana. 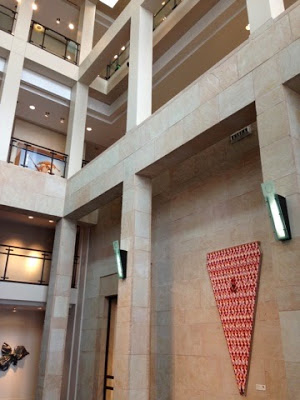 By the time we were done it was lunchtime, so we walked over to the Riverwalk. On the way there, walking down one same street the whole time, the cityscape changed several times over in just four or five blocks. One time we had a repair shop on side and a homeless shelter on the other, and just one block ahead there were fancy lawyer offices and handmade scented candle hipster stores.
The Riverwalk is an outlet mall. We didn’t recognise most of the brands that had stores there, but that was fine… It isn’t very interesting when the shops are all the same ones you have back home! Some were a bit downscale, but the prices really were cutthroat, and after eating at the food court we took the change to have beignets at a Café du Monde branch on the ground floor. Now, it goes without saying that New Orleans beignets have nothing to do with French beignets, but I was surprised at how tasty they are! I was expecting something super greasy and sweet but that’s not the case at all. They do come buried under enough powder sugar to build your own sand castle, so you have to dust them off with your finger and then cough when some of it gets into your windpipe!

Right outside the mall is Spanish Plaza, a fountain surrounded by benches featuring the actual coats of arms of Spanish provinces. I am flabbergasted. Don’t ask me, I don’t know.
In the afternoon we were tired and we didn’t know what to do with ourselves until dinnertime, so we decided to go the movies. For some inexplicable reasons, there’s only like four cinemas in New Orleans, only one of them anywhere in the centre. We had to take the St Charles streetcar for nearly a full hour to get to a completely nondescript neighbourhood that just happened to have a one-screen theatre in it, surrounded by regular homes. So bizarre.
Although the St Charles streetcar moves at a glacial pace (what I like to call “RER C speed”, a speed at which you’re sitting on your train watching tired old joggers overtake you), I recommend making the full trip for the views alone. St Charles Avenue is long, loooooooong, and it’s lined on both sides with the most amazing antebellum homes you can imagine. Quirky and colourful wooden houses with metalwork balconies, impressive and palatial white mansions with columns, porches with swings or rocking chairs, big gnarly trees, verandas full of blooming flowers… The trip would have been worth it even if we had never left the tram.
The movie was The Second Best Exotic Marigold Hotel. Maggie Smith stole the show, as she does, especially when asked:
“How was your trip to America?”
“It made death more tempting.”
“How was America?”
“I went with low expectations and came back disappointed.”
It was past seven when we left the theatre, so just one thing left to do: have dinner with jazz! So once more unto the breach, two endless trams (not as enjoyable the second time because it became dark and only some of the houses were spectacularly lit) and a bit of a walk, and we found ourselves one hour later in Frenchmen Street, New Orleans’ nightlife central. Indeed, the minute we set foot on that street we could hear three different bands playing from as many bars, even on a Monday night in the middle of March. You could hear country, rock, and jazz all around. Many of the bars looked like dives, and some of the restaurants looked seedy, which isn’t my scene, but we were headed towards Snug Harbor, a restaurant/jazz club with a nicer atmosphere. 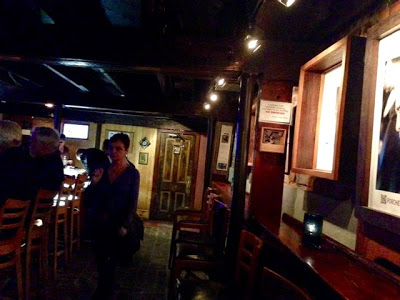 The place has separate rooms for the jazz band, the bar and the restaurant, so we couldn’t see the band play while we had dinner (there’s a separate cover charge to go into the music room), but we could hear them throughout, so at least we had a nice soundtrack to our dinner. To continue expanding my Creole cuisine experience, I had blackened fish, a charbroiled fillet of seasoned fish that was very flavourful and light. So far so good! (I’m running out of typical dishes that don’t have shrimp in them)
And that’s where we called it a day. A short cab ride later, we’re home!