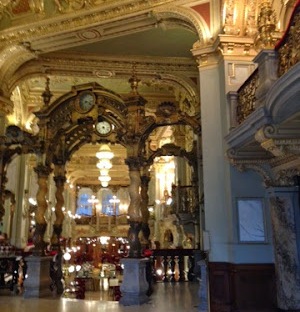 Last night we bid farewell to Budapest in style, by having dinne at the New York Café, this gorgeous classical café where everything is gilded and basically just exactly the same as it was back when it was the meeting point of Budapest’s literary elite. They even had a pianist at the hotel lobby that we could hear from our table. 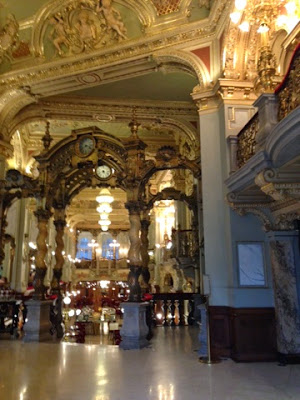 Today we took the train from Budapest Keleti station to Vienna Westbahnhof, a three-hour ride that got us to our next destination with a short delay. From there we took a taxi to our hotel -communication with our taxi driver was difficult as our German was as pitiful as his English… Except right at the end of the ride we found out he spoke Spanish. Sometimes I think we should wear lapel pins with the languages we speak, like hotel clerks!
The weather’s nice enough in Vienna, as it has been the last few days. We’re staying at the Best Western Kaisenhof, a very nice hotel a few minutes away from the city centre with spacious and luminous rooms. I’m looking forward to the breakfast!
Since we had time and we were so close to the centre, we went on a very nice walk past a lot of noteworthy historical sites. We went into St Stephen’s cathedral, which is being restored on the outside, and inside the stone is nearly black but the many windows made it feel bright and airy. 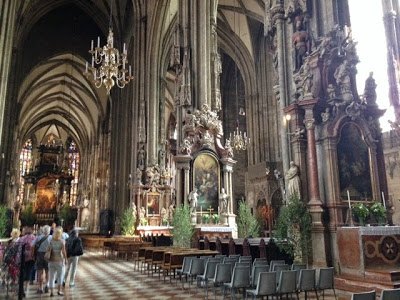 We had tea at a café called Diglas, near the cathedral but away from the tourists, and by sheer luck it turned out to be a fantastic old café featured on our guides. Sure enough, they had all sorts of delicious cakes and pastries on display, I had a great sencha tea (I like the flavor of Japanese tea, but I also like it because the taste always takes me back to my early mornings in Tokyo when I’d have it for breakfast in my ryokan room) and we had our first (but surely not last) taste of authentic apfelstrüdel. All the while they had a TV on at the café showing how they made all these cheesecakes, chocolate sponge cakes, meringue pies, strüdel… and even while eating one of those cakes I almost drooled at the sights. They should sell the DVD -we could watch it on a loop!
Thus invigorated, we resumed our walk and went to Heldenplatz, this massive square that is literally surrounded by remarkable monuments, museums and palaces on all sides. To name just one, we entered from the Imperial Palace of Hofburg, which hosts the Spanish Equestrian Academy and the museum of Empress Sissi. It was too late to visit the interior of any building and anyway the sun discouraged activity, so we sat down in the shade and basked in the glory of the Austro-Hungarian Empire for a while before heading back to the hotel. 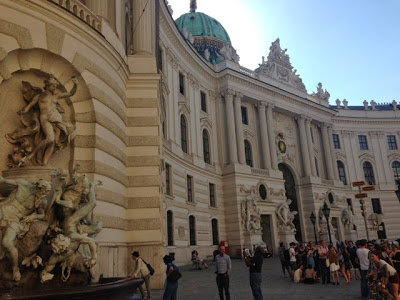 The weather was perfect, the streets were filled with people, both local and otherwise, lots of stores and restaurants everywhere… I can tell that it’s gonna be a pleasure to rediscover this city.

And a last detail: oh, that fantastic feeling of being able to pay in euros again! And not having to convert prices in your head anymore! So liberating!