Here we go! Today the plan was to start from the top and visit Buda Castle! But only after a magnificent breakfast at the hotel, which offers a full breakfast buffet, a bit of a rarity nowadays.

We began by taking the metro, which is cleaner and looks newer than many Paris Metro’s trains and stations, so well done Budapest! There are several types of transport cards, but they all looked like you need to make a lot of trips to get your money’s worth, so we ended up getting packs of 10 tickets, like in Paris. That way each ticket costs about 300 forint, or 1€.
Our hotel is on the red metro line (M2), so we went straight to Batthyany Square on the other side of the river (we’re staying east of the Danube, in Pest, and the castle is on top of a hill west of the river, in Buda). From there, it’s a 10 minute walk to the base of the hill, where a turn-of-the-century funicular connects the top with the street level. There was a bit of a queue and the sun was beginning to glare, so it was decided that we would walk up the hill ourselves. I was concerned that it would take forever and/or we would get lost in endless meandering paths and eventually be mauled by bears, but to my surprise it’s a very straightforward climb and it only takes a few minutes. As you walk uphill you’re rewarded at intervals with amazing views of the Hungarian parliament, a gorgeous white-stone building that looks beautiful from every angle. That’s gonna be on our list to visit tomorrow! 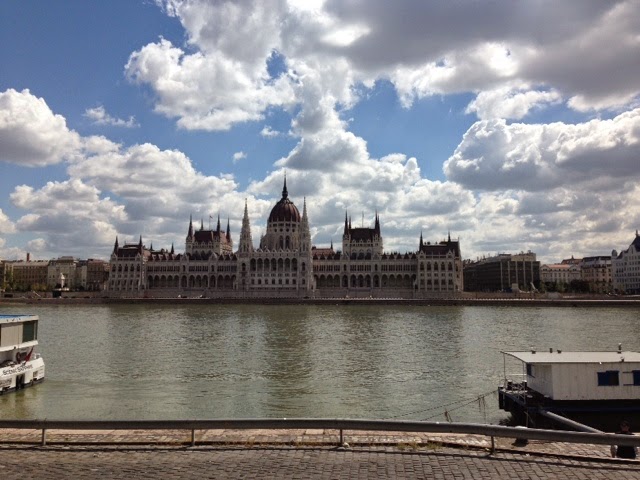 Although Buda Castle for short, in fact what you get to explore here is an entire citadel with several compounds and historical buildings and avenues. I read that the original castle was built in the 14th century but has been rebuilt, renovated and expanded multiple times since. There were hundreds of other tourists everywhere, but it didn’t feel too crowded -there’s lots of streets and open spaces for everyone to walk around.
One of the highlights (or eye-lights, as the French like to say) of the visit is the Matthias church, an amazing 14th century Gothic church. It was apparently renovated in the 19th century and must have had work done recently, because it was so white and shiny that it looked like they had just received it from the store and unwrapped it right there on the square. The white stone surface is filled with little arabesques and ornaments throughout, and the rooftops are tiled with bright colours, in typical Eastern European style. Unfortunately, it being a Sunday morning, we couldn’t go inside as it was closed until the afternoon.

The Matthias church is surrounded by the most bizarre combination of architecture you can imagine. Right next door is a truly HIDEOUS Hilton hotel that they should seriously just raze to the ground, exorcize the foundations and replace with something worthy of the surroundings. Then, all around these two buildings is what’s called “the Fisherman’s Bastion” (don’t look at me, I have no idea), a strangely quaint fairytale-like complex of terraces and little towers. As it turns out, it’s all a turn-of-the-century construction made to imitate Romanic and Gothic styles. It looked a bit like a movie set (but far too pretty to ever appear in Game of Thrones, as mom declared) but the views from the terrace were great.

We walked a bit around the citadel, admiring some of the old façades, had lunch and went into the actual castle to take a peek into the Hungarian National Gallery. By this time we were too tired to actually make the tour of the museum, so we made the tour of the museum store instead. It’s all about compromise! I got a couple of beautiful prints to compensate! Right outside is the presidential house, by the way, and we arrived in time to see a small changing of the guard.
After all this, it was time to get back down and cross the imposing Chain Bridge to Pest again. And what’s the best thing to do when you’re tired of walking, the weather’s nice and you want to see more of the city? A river cruise! So sure enough, we found the quay where all the tourist cruises were stationed and hopped on the next one. It was a 1-hour trip up the Danube, past Castle Hill and the Parliament, all around the beautiful and green Margaret Island and then back down again. The ticket cost 2100 forint (a little under 7€) and included an audio commentary on loudspeakers that I found half inaudible and half unintelligible. Thankfully it’s long enough that you can take out your guide and read up on the sights yourself! 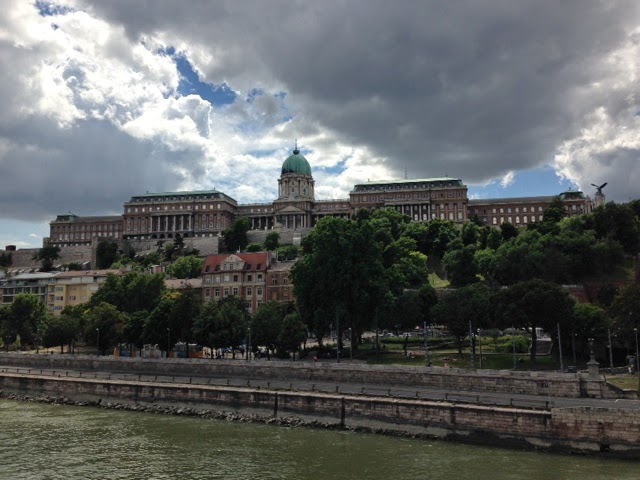 It was a great way to while away the time, and by the time we were back we had recovered the strength to walk back to the city centre. We stopped for tea at Gerbeaud, one of those 19th century cafés with chandeliers and marble tables that you associate with places like Budapest, Prague or Vienna. You can almost imagine the philosophers, intellectuals and composers of the time gathering in these cafés for their afternoon discussions. It was of course highway-robbery expensive for tea, but then again so is Starbucks, and this is such a beautiful place. They were having a book fair outside, so we could watch the crowd of locals queuing at different stands on the square to get their books signed by authors sitting on lawn chairs here and there.
We passed the Sinagogue on the way back to the hotel, but it was closed. Another addition to our to-do list!